santafewillie said:
Any chance of removing the molds and letting it dry from all sides?
Click to expand...

Checked again today, still damp and soft, 72 hrs. I am considering trying to remove one, to see if it even picked up the details of the mold. At this point I wouldn't recommend this product for mold work.

So when I met my wife I was stationed at Ft. Story. When I had mentioned I wanted to move back home after the Army she kinda grimaced at the idea. Well flash forward 9 years and she refuses to ever leave. Now mind you she is a native of Virginia Beach. So the beach life is what she was used to. Bring her here to the mountains of West Virginia and she refuses to leave. I guess these country roads do stuff to you. If I had a dollar for everytime someone made fun of me for being from West Virginia then I'd be a millionaire. Sadly the ones who did the joking were way more redneck than me. Served with a few odd ones. One from Tennessee who was in tears when he found out ATVs were illegal to drive on highways. One from Alabama who knocked all of his teeth out for $100 so he could buy more beer. Oh yes the list goes on.....come across some dandies in the Army mechanic field.

Glad the day is nearly done. Working a bit of overtime.

Converted dispatch system to our new ISP on Wednesday and the workstations didn't come back up, although everything else on the same VPN link did. After being down since then and being told it was on my end, (no changes on my side were done), I finally figured it out and instead of the application people, I talked with the network guys and they found a rule they forgot to put in place from our external VPN to their internal network. Voila` everything is working again. But it's on my end.

Tired of knowing everything sometimes. LOL

kbkchooch said:
Did you drug them, or just clunk them on the head??
Click to expand...

i am not even sure if I had threatened them that would have helped. The 9 year old decided she was going to read and has done that all afternoon in grandma’s office. The grandson decided he was going to watch racing videos on you tube and fell to sleep for about an hour. He is a perfect 7year old right now. Just another30 minutes or so till freedom for me. They are good kids but really got spoiled the last 2 weeks + they spent in the 50th state with grandma, my sister and my brother. They loved the ocean and whale watching.

Staff member
Howdy - here is the whole ball of wax!
Onshore flow will increase ahead of an incoming low pressure system today, as a result gusty west winds will develop over the mountains into the deserts, cooler weather will prevail, and there is a slight chance of light rain tonight into Tuesday. Santa Ana winds and warmer conditions will develop Wednesday as that system moves east. Another low pressure will bring a round of cooling, gusty west winds, and a slight chance of light precipitation Thursday night into Friday. Warmer and drier conditions will develop for the weekend into early next week.

bnsf971 said:
One of the online wargaming games I play offers a model of USS West Virginia, a WWII battleship. The boat itself is pretty good, though the offshore people that designed it seem to believe the stereotypes about the area. The captain of the ship looks like an alcoholic...
Click to expand...

Unless I miss my guess, the game you mention would be World of Warships,would it not? I too play that game. I am in group Taffy Three. William.

L&N Castle said:
Unless I miss my guess, the game you mention would be World of Warships,would it not? I too play that game. I am in group Taffy Three. William.
Click to expand...

I am the CO of Requiem.

Well look what came in the mail today. First of four new hoppers showed up today. Wait! It's not a C&O hopper though.....

Yeah itll need couplers and wheels done up prior to making it onto the layout.
L

To One & all,
Is it ok for me to post pix of my layout here in this forum. Also, what about my model rr history?
Lesterl

Please do show your layout. I'm looking forward to seeing it.
K

And the benchwork for my layout is finally done! Now just need to get foam for the top and then on to laying some track. 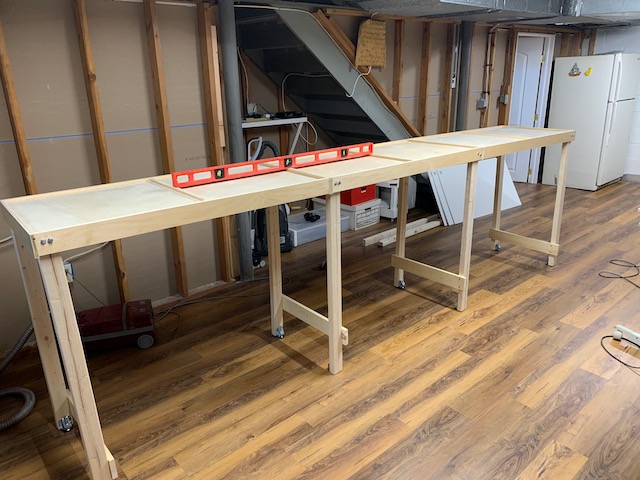 Overnight was quiet at our PD. Everything stayed running. Now I'm waiting for the State boys to get with me to move their stuff over. If they decide to change ISP's again, I'm close enough, I'm retiring! I have one more big conversion that will be done prior to that retirement though, and that will be to move the Domain I created to new servers sometime in the next 24 months. What fun that will be......NOT!

Nothing new on the trains for the past week.

Good Morning All. Clear and 48° in this part of the world. Rained pretty much all day long yesterday, leaving 1.5" in the rain gauge. I did get my spinach plants planted just as it was starting, but not the peppers.

How about a stack of blueberry pancakes and a few sausage links to start the day, Francine. Tell Mel not to char the sausage today!

The rain yesterday gave me some extra time in the train shed. I finished up Tommy's Tree House, but I think that I want to add some more minor details. Other detailing will be done once I plant it on the layout. 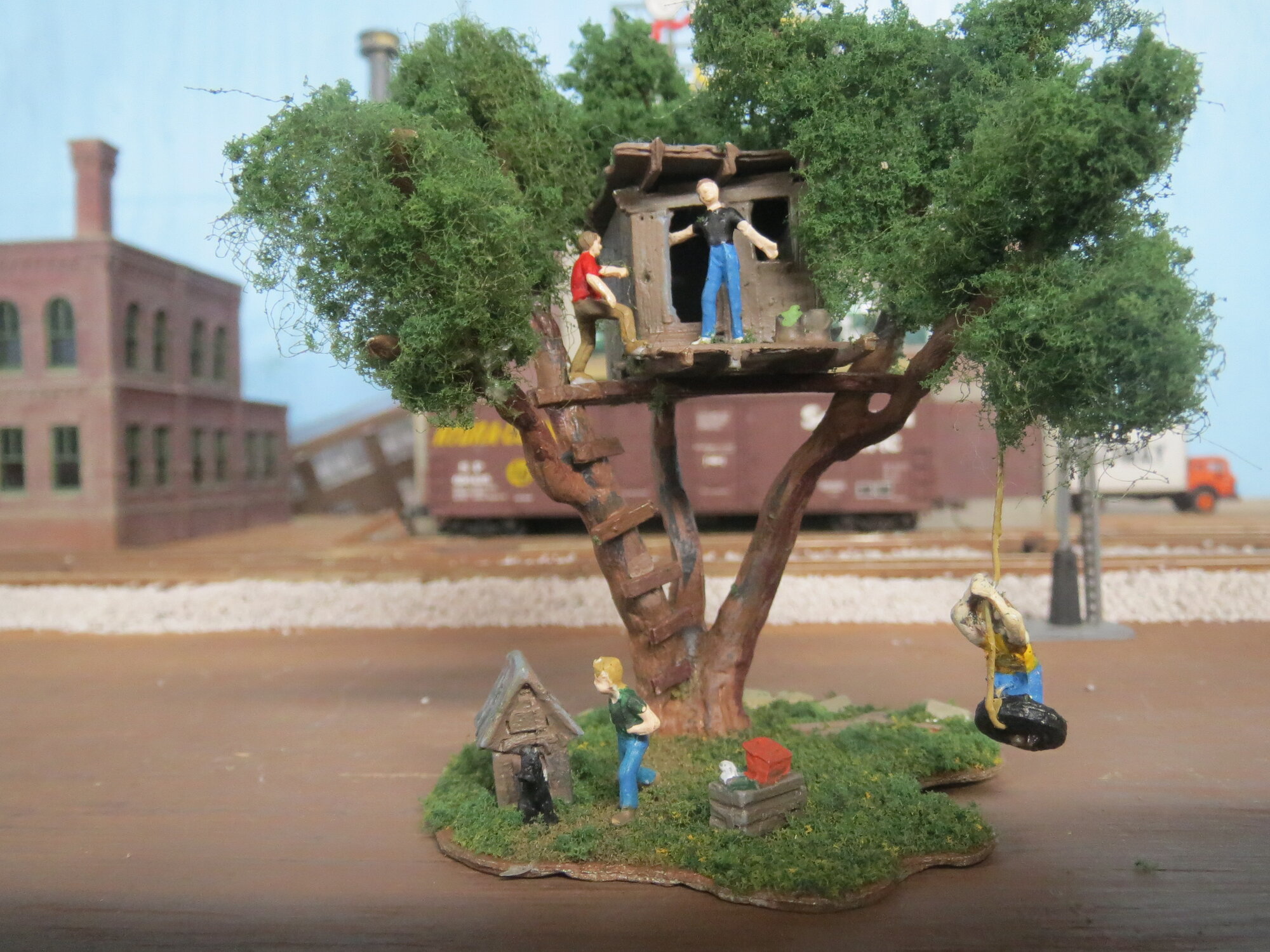 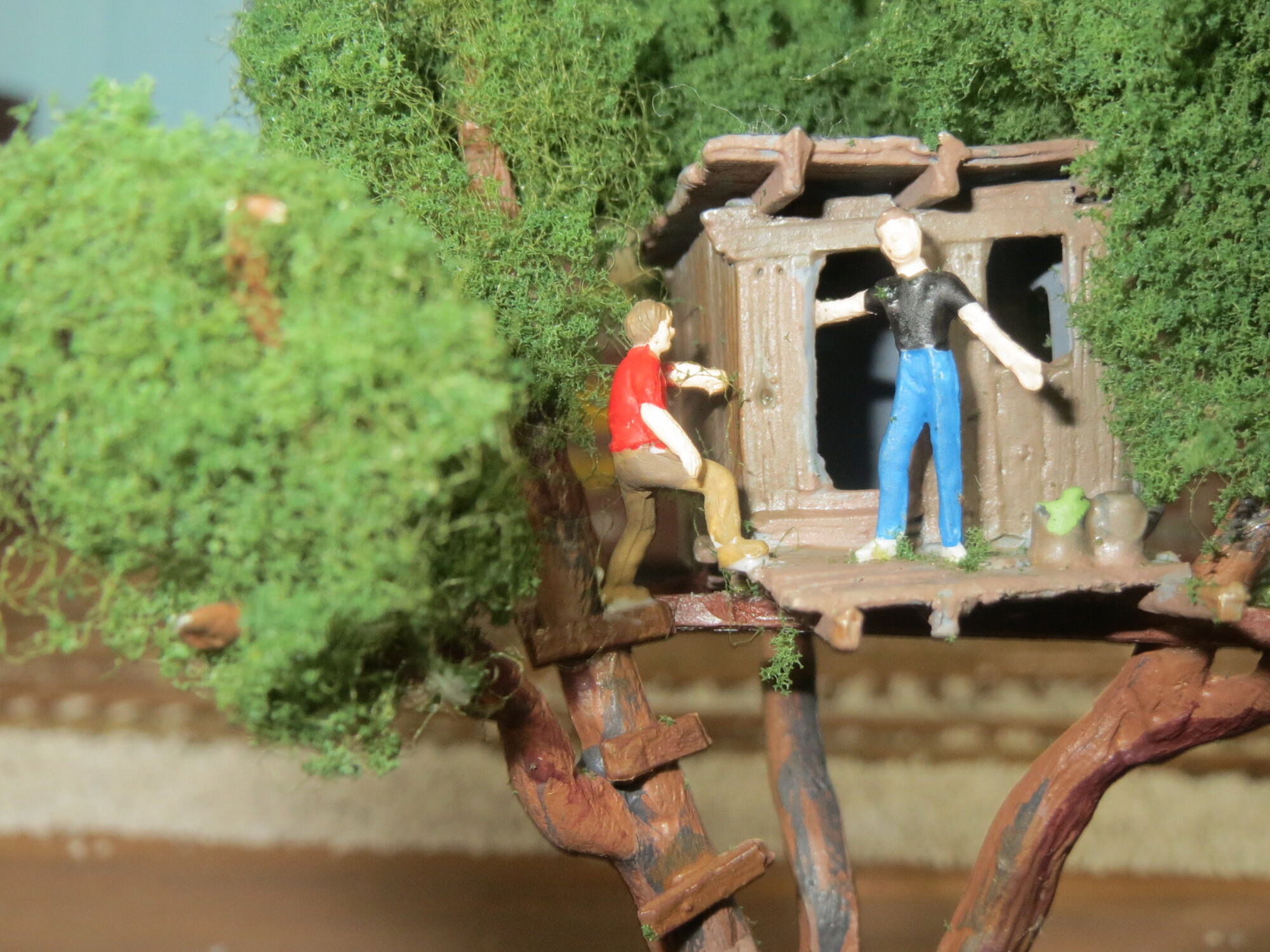 The pictures highlight just some minor paint upgrades that I need to do, some of which might be visible to the eye.

Jaz - The scale is a white metal casting that Bar Mills adds to many of their kits, many times it isn't even relevant to the actual kit. In this case it is. I have several others scattered about. 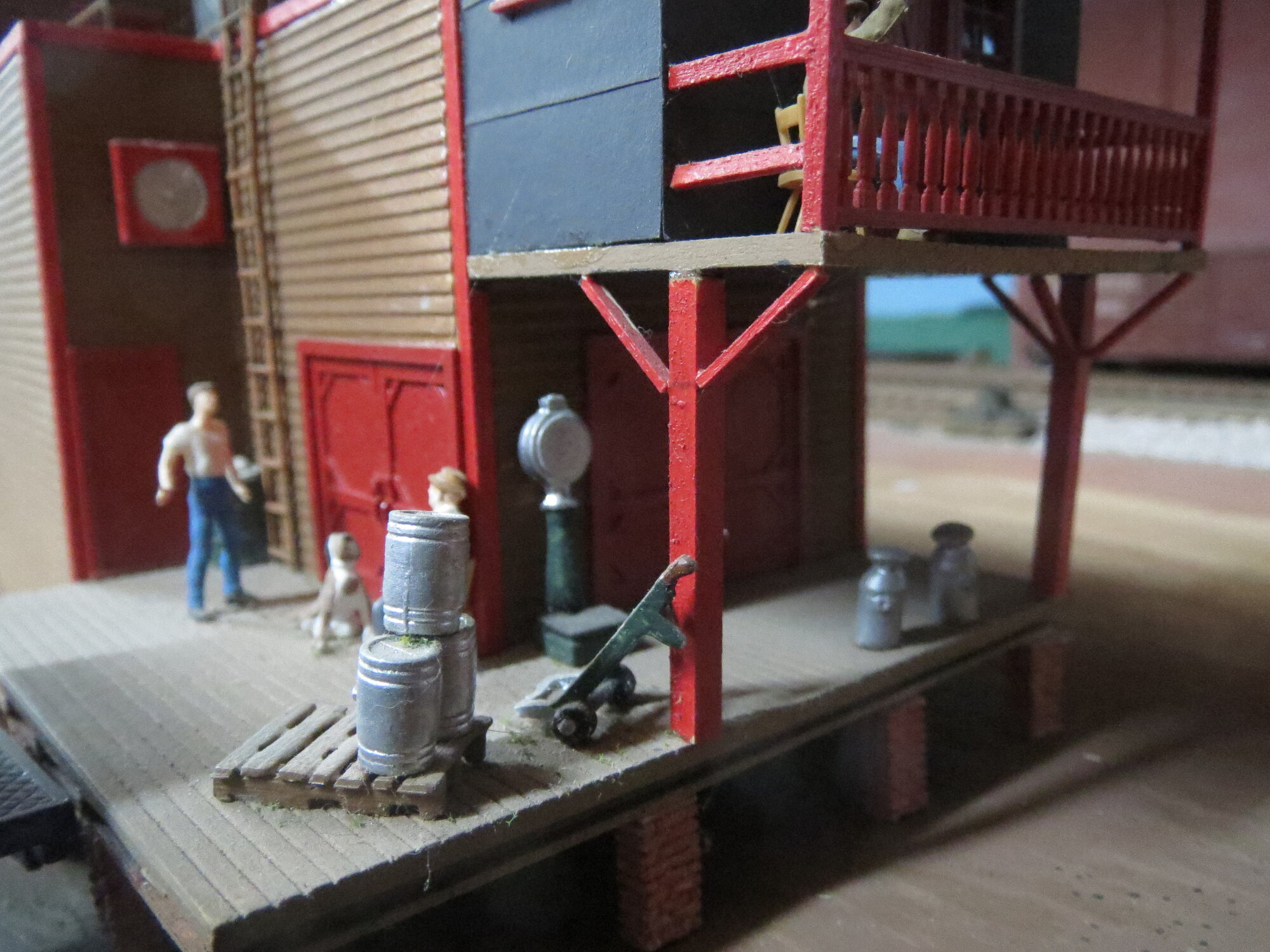 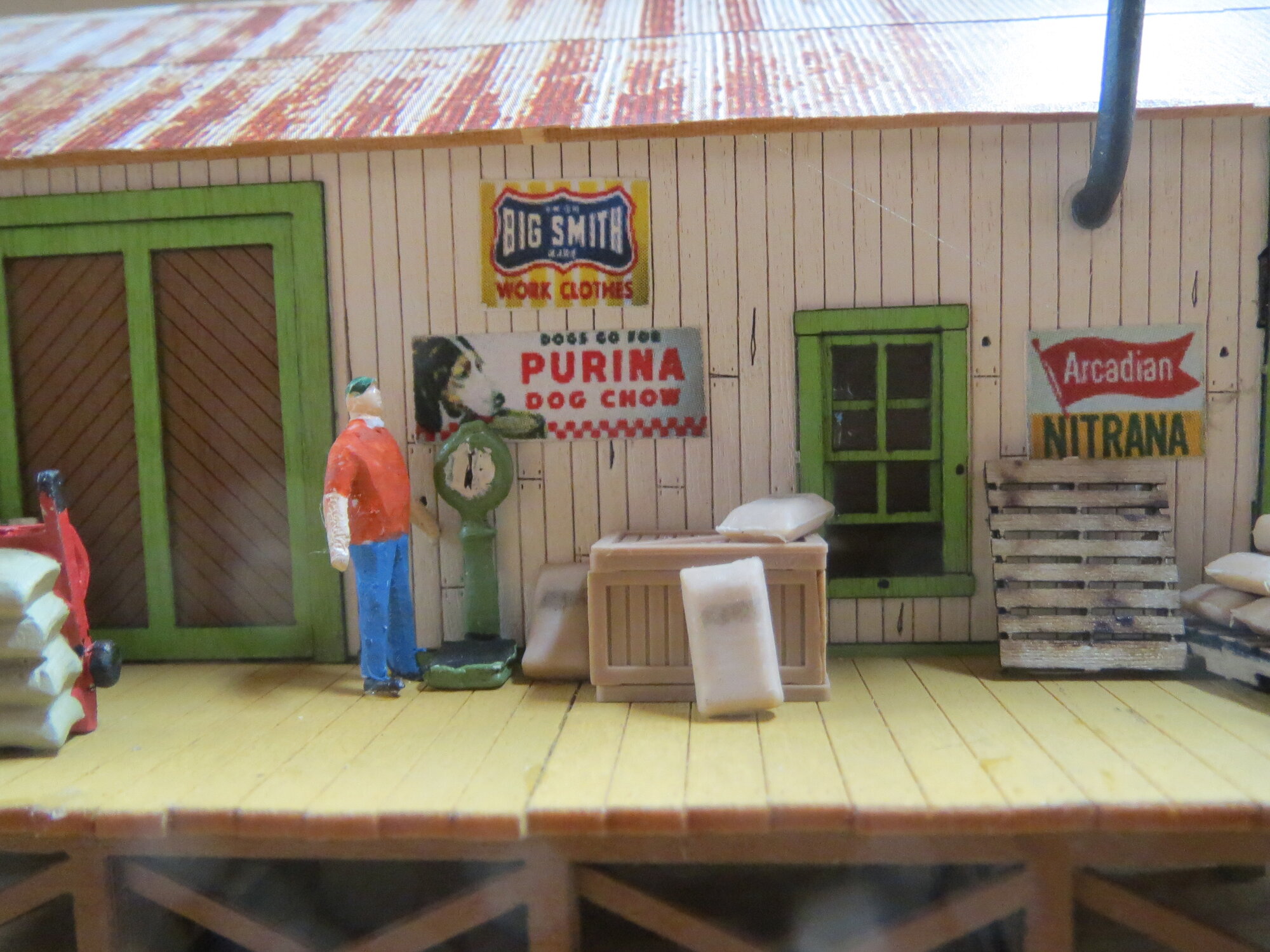 Justin - You know your state history well. I understand that West Virginia Day (no National) on June 20th is a state holiday.
Patrick -

Patrick said:
We're on a major N\S run for the BNSF from Kansas City to Dallas and south.
Click to expand...

Technically that line going south through Oklahoma City, goes to Ft Worth and then south from there. Santa Fe sold the cutoff to Dallas to KCS back in the early 90's, thus the reason that the interchange wye that I railfan at is there. BNSF has a former Frisco line going north from Dallas that turns east in Sherman TX and goes to Texarkana. That line is besides the building that I worked in for 43 years and I got to do a lot of train watching from there as well.
Greg - While it won't save you any in taxes, you can roll RMD's over into Roth IRA's and earn tax free income.
Lester - Post away!

Everyone have a great day. By the way, where's all of out fishermen, Guy, James?

Lester : They're only offended if you don't.


Texas Hobo said:
Checked again today, still damp and soft, 72 hrs. I am considering trying to remove one, to see if it even picked up the details of the mold. At this point I wouldn't recommend this product for mold work.
Click to expand...

Hughie : if its a plaster based product , any moisture from an unsealed container or if its in a paper bag where humidity can migrate thru it , hydrating it making it useless.

You might check and see if it had manufactures date on it to see how old it is .

Good morning from soon to be very wet So. Central Wisconsin. Heading into the 60’s but the rain will keep me indoors.

Francine, a couple pieces of French toast, chemical syrup, a slice of baked ham fried and a diet Dr. Pepper. Thank you!

I have grain mill stuff at the work bench, I have 3 stripped down locomotive shells at the paint booth, I have 4 pieces of rolling stock that need safety stripes on the ready board but I couldn’t get into them last night or this morning so far. I am going to do my exercise program, shower and see what happens then.

I took some horrendous pictures yesterday practicing with my IPadPro instead of the 5SE phone. Deleted about 100 pictures after reviewing them. But I had a couple though that looked damn good at the end of this practice session. I know that will happen again today 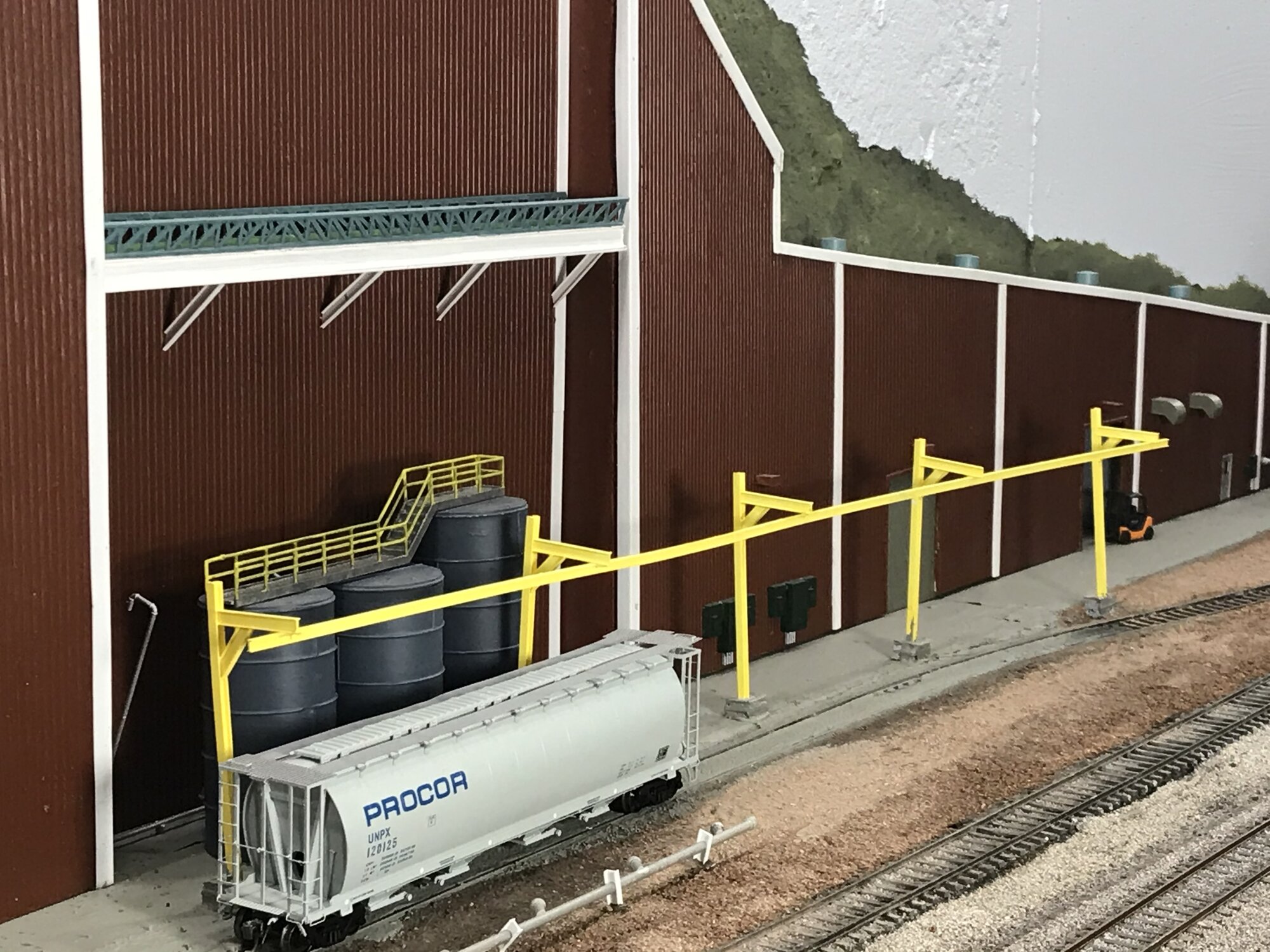 as I still have the models staged. I didn’t think between the 2 the differences would that noticeable but to me they were. No new pictures to post as these are spots of the layout I had posted previousl.

Morning fellers. I hope everyone is well. Still working track sections on the layout. Spent last night filing and adjusting track sections as needed. Not that my track is bad. It is however loud. Its rough but not to the point of causing derailments. All the more reason to fix it now before it gets out of hand. Once I fix the one section I'm on now I'll have two others to work in. One section I'll have to replace a pair of turnouts. They are on the broke side of things. Another spot just needs shimmed. That should take care of my track woes for now. Perks of having my railroad in the garage.

santafewillie said:
Justin - You know your state history well. I understand that West Virginia Day (no National) on June 20th is a state holiday.
Click to expand...

Well for the record its required to take two years of West Virginia history in school. I guess I actually retained some information. June 20th is the date we became an official state.

I still use Facebook for railroad and model railroad groups. Yesterday morning I saw this interesting video. A train separated while moving at a rapid speed.

This proves I am prototypical when my HO trains uncouple in the middle of the train while I am operating them !

Good Morning all! Just a quick coffee and a scan of the posts. Several curbsides scheduled.