Ran errands for several hours then tackled the problem light switches. Neither me or the wife could figure them out. Finally called an electrician and he walked us through it for $25. It was worth it just from the frustration stand point because now they work. Tomorrow is fan installation in the train room. The renovation starts on the 11th.

Jim- Beautiful CN picture and of course the Pennsy loco.

Sirfoldalot said:
Happy February All! Nothing special, just don't forget Valentine's Day for your significant other?
.
Click to expand...

I don't dare forget, cuz its also her birthday!! Double whammy for me!

A late night post for me. Went to the hobby shop today. I was on a specific mission to find grab irons. Ofcourse the ones I needed were sold out. So back to square one with that. Did however score some more track cleaning items. I've been overdue for some upgrades. My old track cleaning blocks are well worn. So much so that its leaving pieces behind. Or they are leaving pieces behind. I know this because if I run my finger down a rail there's little pieces of em on the tip of my finger. So an upgrade was in order. I'm not having many issues running my trains at the present moment and I'd like to keep it that way. I also went on cambria's recommendation for the crc stuff. At $3 a can why not give it a try as well. It does say on the can that it promotes better electrical connectivity. So preventative maintenance is my go to for the moment. In the meantime I'll still run my uboat without the grabs until such a time as I can find a set to install on it. I don't feel up to stripping another atlas shell just for grab irons. Atlas makes really good locomotives. Their prices reflect that. I just dont have the heart to strip down an atlas shell. Anyways that's all I have for now. I'll try to stop in tomorrow. 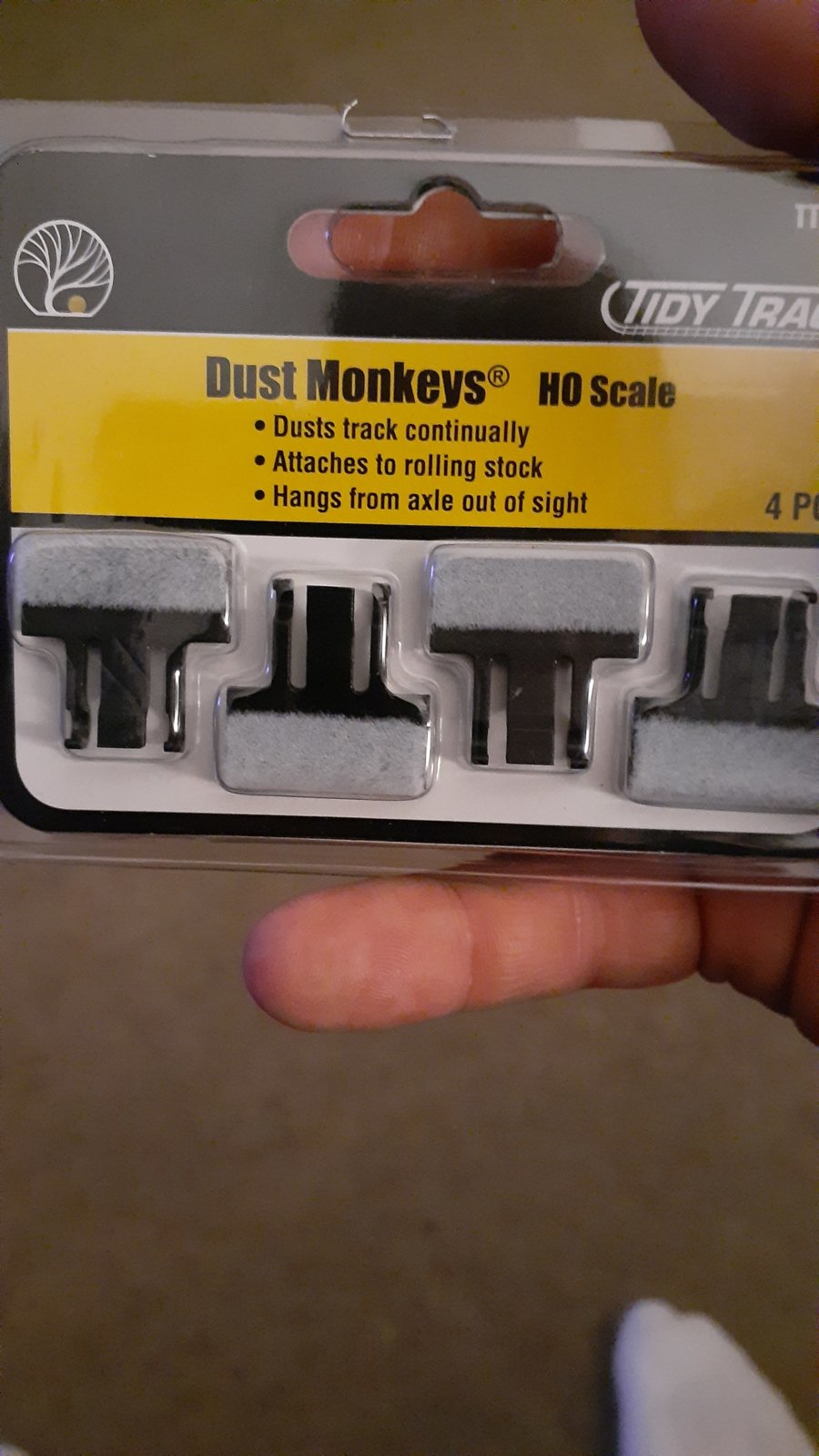 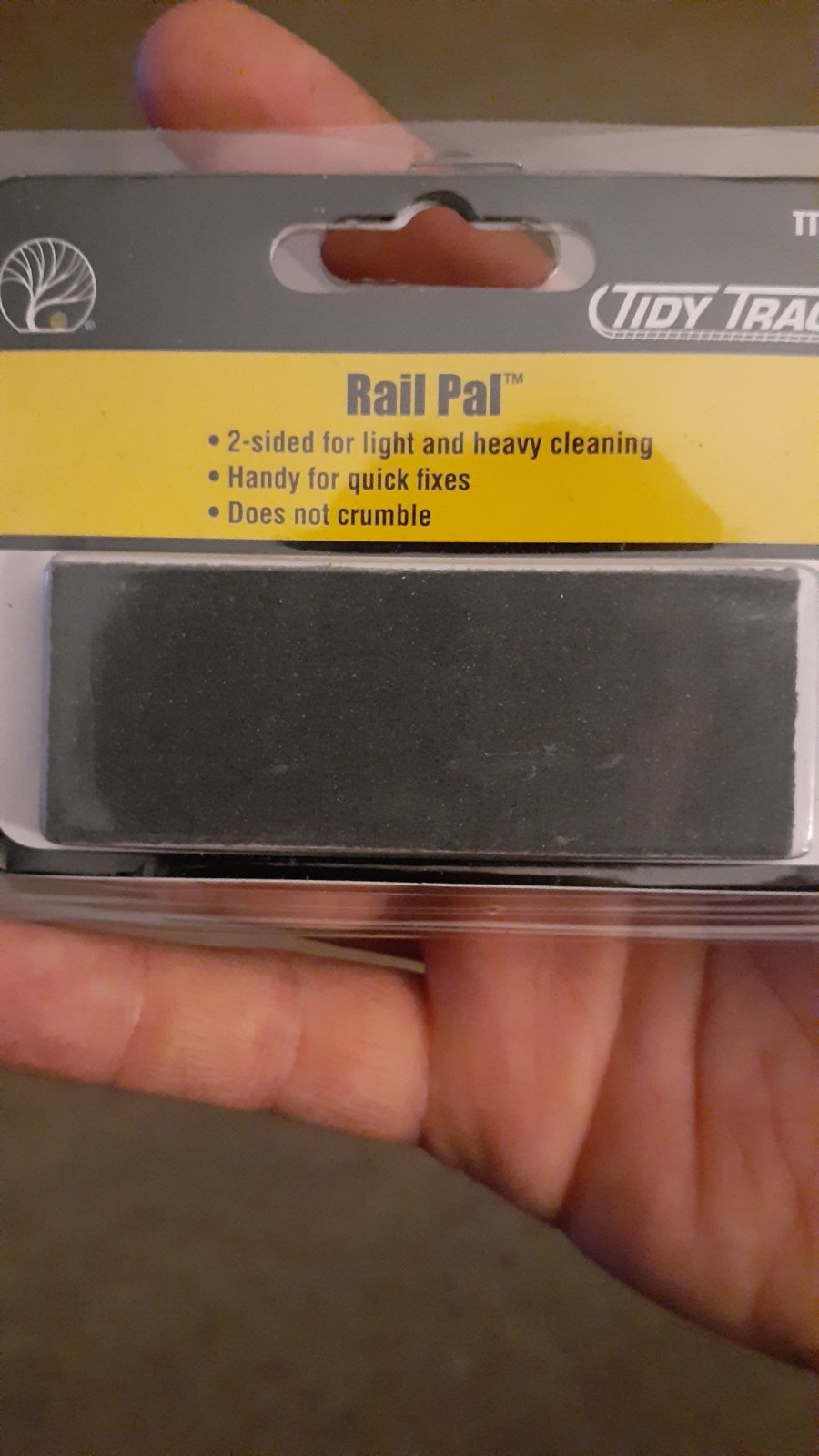 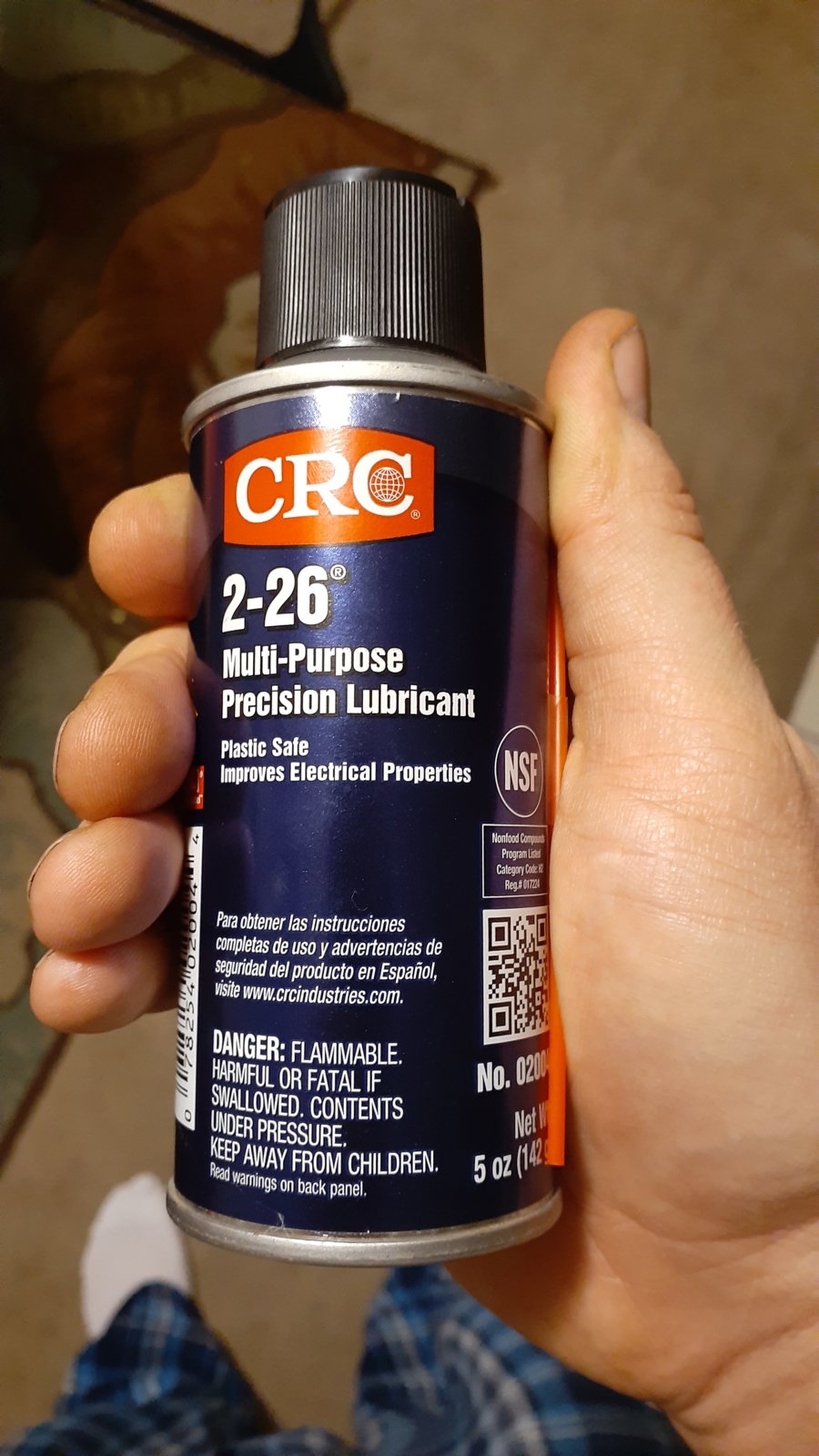 Hi Francine, Coffee and a Apple Turnover if Willie didn't get the last one ?

Got to check my fire and make some soup for dinner as well clean out the old coffee maker so it brews faster. I have another Cuisinart coming on Monday though but still have to use this Toast Master till then and it's taking forever to brew, besides the coffee doesn't taste all that great ! The Cuisinart has a replaceble charcoal filter the water passes through and the coffee always tasted better as I recall from the prior unit. I just need remember to clean the new Coffee Brewer more often. Having the old pot will also be a help.

Justin- Just wipe the rails after cleaning with the CRC lighty. As for the engines I'll spray some on a paper towel and hold one end of the trucks on the spot while running then move it forward to a dry spot on the towel. You'll see some black on the towel that you wouldn't with your eyes. We do our club layout once every 2 months.

Staff member
Good morning. It's mostly clear and 35.
Everybody ready for the Supper bowl?

Good Morning All. Clear and 46° here on Groundhog Day. Weather today and tomorrow is supposed to be clear, sunny and a temperature of 77°. Then snow before dawn on Wednesday, and back to the 60's by Friday. I think that there is a football game later this evening, at least my wife says so. Only one of the season where they actually show the halftime show. Today is my wife's first day back to work. Word spread fast, she is already booked up for the whole day. They do close the office about 30 minutes before the game starts, if that's on time! For starters, I am making her some crab-stuffed mushrooms in vodka sauce and shrimp cocktail with homemade shrimp sauce. Then I'm grilling some chicken wings that have been marinating overnight in a chili powder/lime juice/soy sauce concoction.
I spent much of the day yesterday doing yard maintenance since it is now almost dry on the surface. Raked up some leaves, picked up tree debris (twigs and huge acorns) that had fallen; all in preparation for the first mowing of the year during the next week. Also planted some basil and parsley plants in pots for the back porch herb menagerie. Nothing like freshly picked herbs when you're preparing meals. They'll go alongside the perennials already out there like rosemary, sage, oregano and spearmint.

Good Morning Flo, I'll try some of that Ham & Potato Hash that's on the specials board this morning.

Thanks for the likes and comments regarding the scene with the vacant urban lot yesterday; Rick, Jerome, Garry, Greg, Phil, Chet, Sherrel, Joe, Tom, Mikey, Jim, Curt, Karl, Justin, David. It was one of those odd little areas that worked out well for me. It is also at the edge of the upper level so it is just about eye level for optimal viewing.

Managed some time in the train shed late yesterday. Continued the ballasting at the staging yard entrance and started preparing a derelict boxcar for storage in the planned materials area next to the tracks. 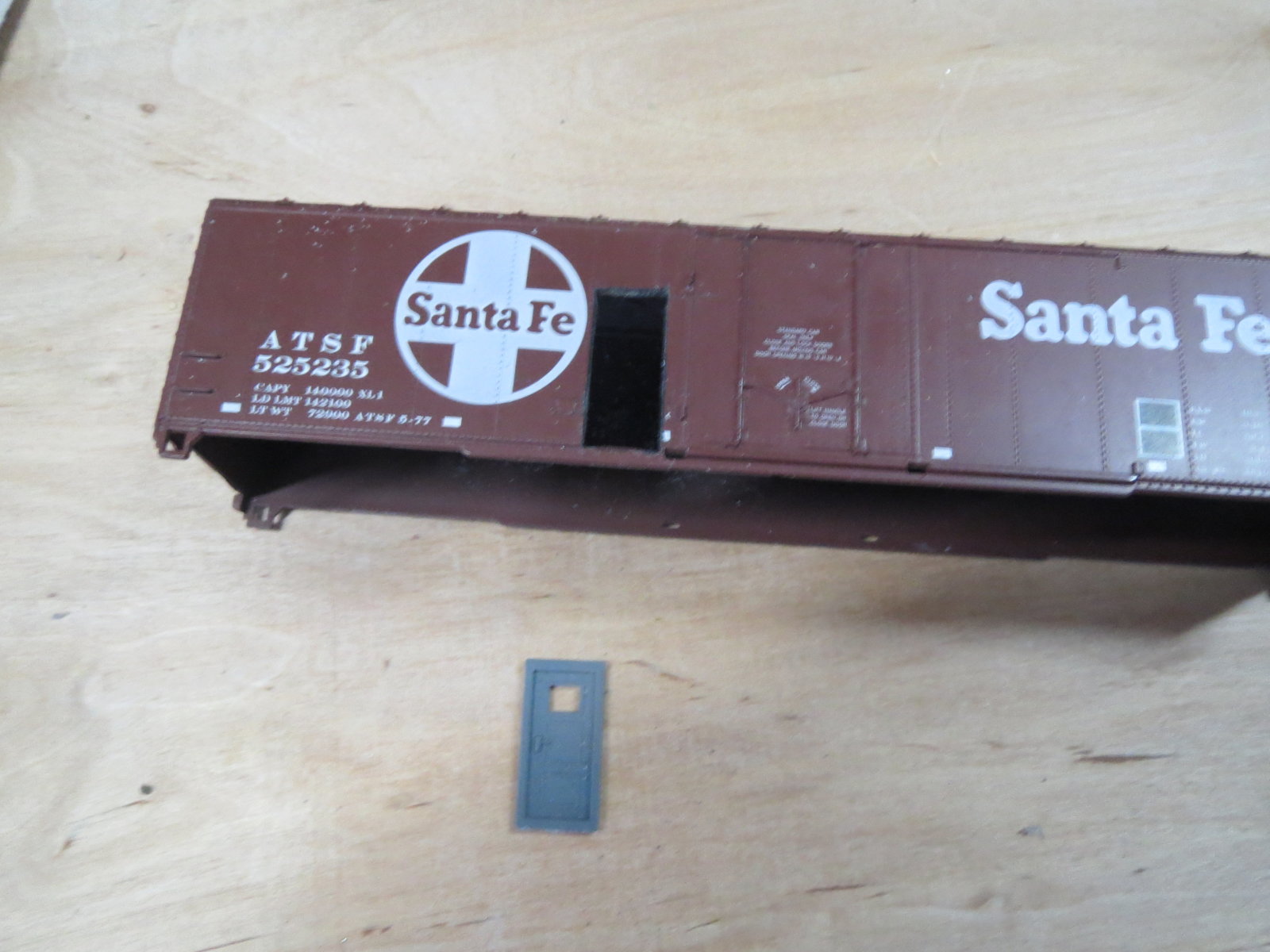 It's an old MRC (Roundhouse) kit that no longer fits my era.
Mostly ran trains on the upper level while waiting for the ballast glue to dry. Snapped a couple of motive power pictures as well.
A pair of Dash9-44CW's from ScaleTrains. 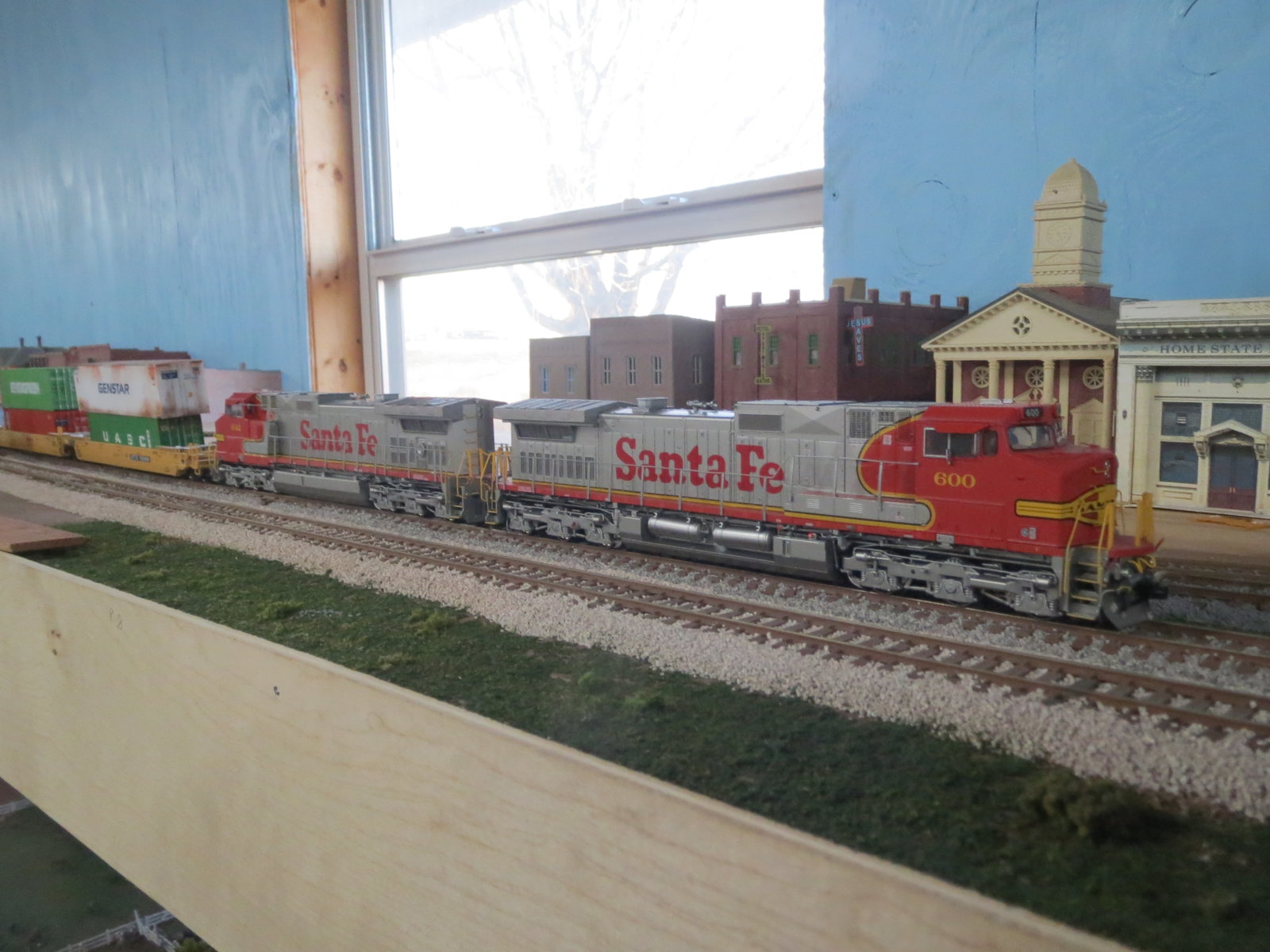 Another pair from Athearn. 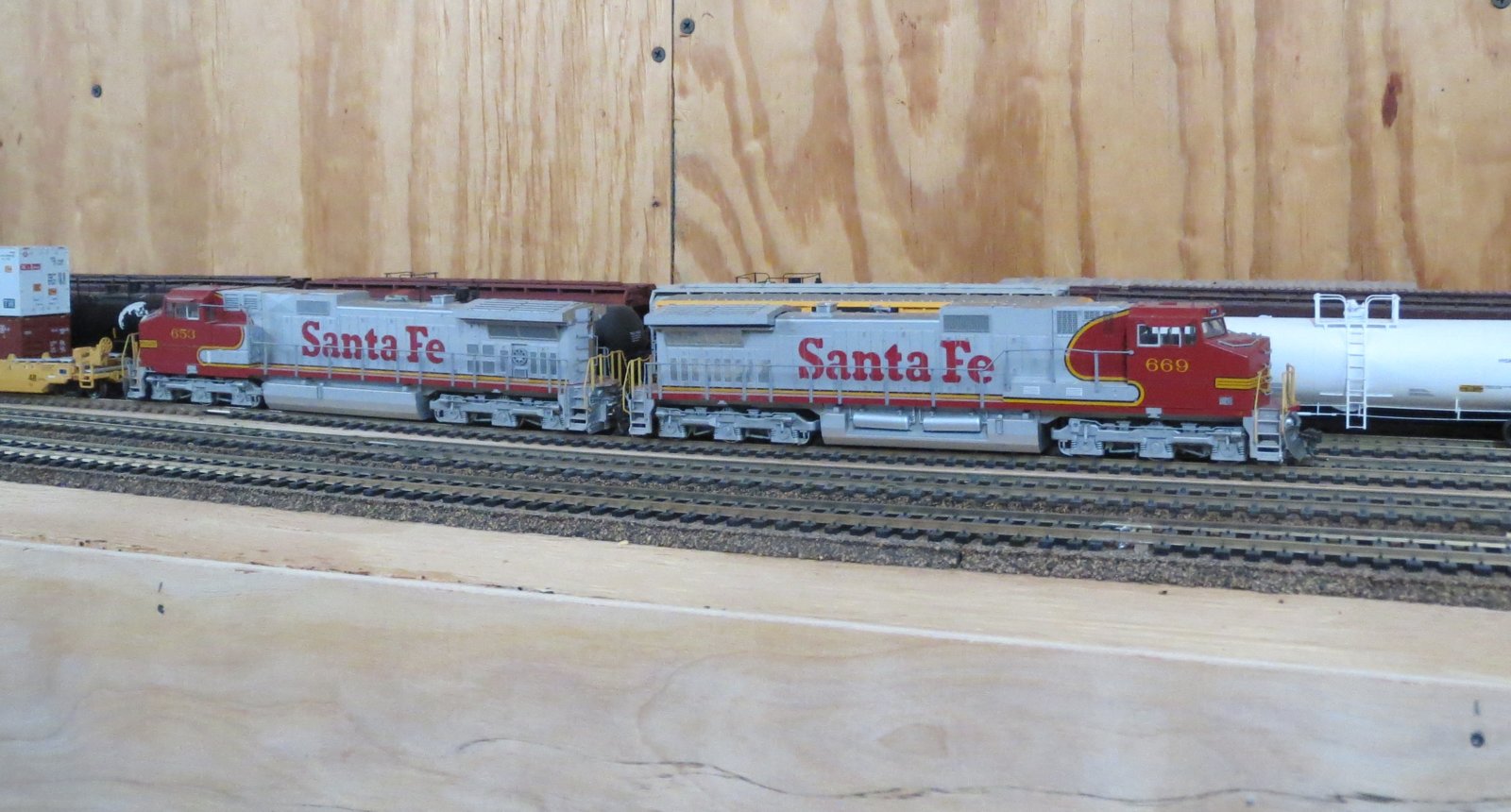 I thought that I took a third picture, but it's not here.

Garry - I have always liked your sense of humor regarding signs and industry names.
Greg -

Never lasts too long in the train shed!
By the way, good luck with the NMRA visit. Continued success with the program, I think that you posted that it is the Golden Spike program.
Tom -

I have seen that video and the accompanying website. It doesn't appear that any of those drivers are professional drivers. Mostly rental trucks and RV"s.
Sherel - I didn't notice that the picture had bluffs and a beach in it!
Chet - Pretty awesome looking vehicles.

Everyone have a great Sunday.

Good morning, America! Been a very busy last few days! Getting quotes for house insurance and car and motorcycle as well. Have our youngest granddaughter for a couple of days, two dogs to go to vet in the morning for their teeth cleaning and planning the packing and what goes and what is going to be sold or thrown away. Decisions, decisions! And to top it all off, Friday was our 45th anniversary! A lot to catch up on and not enough time!

Nice work and photos! After our move, things will get back to normal. We just keep telling ourselves that!

Thanks again to everybody who commented on my scene with the truck and the bridge. I'm glad it lead to a friendly and interesting conversation about bridge strikes.

Willie ........ I like the Santa Fe red and silver war bonnet paint scheme. Your GE units look cgreat. .... I'm glad you like the humor. You saw the name on the truck trailer. Did you see the name on the blue tow truck?

Karl .... Maybe a couple of years ago you mentioned here in the forum about NCE's program to trade in old dcoders of any make for new ones at only $10.00 each. Because of that I have taken advantage of their offer. I just sent them five more which will be the third time I have replaced old decoders with their program. .... So, thanks for telling us about that.

51* and sunny. Been peeking in but not posting. Neither coffee or napping have overcome lousy feeling Wish everyone feels o.k.

Staff member
Morning -- Did the groundhog see his shadow?
No wonder the beach was nice yesterday - the temp reached 82 here.
Supposed to be cooler at 71 today and back into the 60 range all week.

Coffee, Francine, and lots of it! Gotta make a store run this morning and prepare a dish to take to our Bunco annual Superbowl Party.

Burlington Bob said:
A lot to catch up on and not enough time!
Click to expand...

BBoB = Story of my life! Believe me - it only gets worse!

Staff member
Sherrel, I noticed when I lived out there, the beach was great--as long as you never went in the water. It comes down from the Gulf of Alaska, and to someone accustomed to warm Gulf Stream water, was frigid.

Howdy everyone!
Thanks for all the likes
Flo - I'll have a breakfast bagel with double bacon, a hash brown and coffee - oh and a glass of water - thanks.
Curt - thanks for the photos comment.
Justin - after resolving your train troubles, I see that your serious about not having to go through that again
Willie - Those dash 9's look pretty awesome!
Bob - I know your excited about the move. With all of the work that's involved, I hope everything works out well for you.

*** I have a question about Scale Trains locomotives. Do the rivet counters come RTR or are they kits with railings, grab irons and other accessories that need to be attached?

I got the rest of the day to work on the layout, so during my break, I'll stop back in here.

Catch you all later and have a nice day everyone!
Jim

NS Pittsburgh - one of the inclines - top center

bnsf971 said:
Sherrel, I noticed when I lived out there, the beach was great--as long as you never went in the water. It comes down from the Gulf of Alaska, and to someone accustomed to warm Gulf Stream water, was frigid.
Click to expand...

It still has not warmed up at all! I have no idea how people take it? Anything below 78 is cold to me - 82 being my comfort factor.
F

Sherrel- you took the words right out of my mouth. Older I get the warmer I like it.
Phil

Staff member
JIM - More awesome photos ... Quite accustomed to seeing that Santa Fe (BNSF) one.
I have ridden that incline at Pittsburgh!

max diyer said:
I have a question about Scale Trains locomotives. Do the rivet counters come RTR or are they kits with railings, grab irons and other accessories that need to be attached?
Click to expand...

They are RTR, No assembly required. And they aren't overly expensive, both the Dash 9's and the SD40-2's that I have gotten were right around $150@. The SD45's that I pre-ordered are Operator models (no rivet counters in ATSF) are around $100. They also offer detail kits for the modeler to bring them up to Rivet Counter quality. I don't know if grabs are on the Operator models, but the railings are.