Good morning. 56 and quite smokey out from forest fires. Supposed to be into the mid 80's today.

Good morning, we have 62 and cloudy. Hazy skied last eve from smoke and a beautiful orange sky at sunset.

Unfettered said:
Currently sunny and 73 going for a high of 88 and possible thunderstorms this afternoon.
Click to expand...

Sounds almost identical to here except the high of 85 for us.

Curt ... Interesting picture of the submarine.

Terry ... Your photo of engines headed to the scrap yard is interesting. It reminds me of my seeing the scrapyard next to EMD in LaGrange IL years ago. A lot of locomotives were cut up for scrap there. 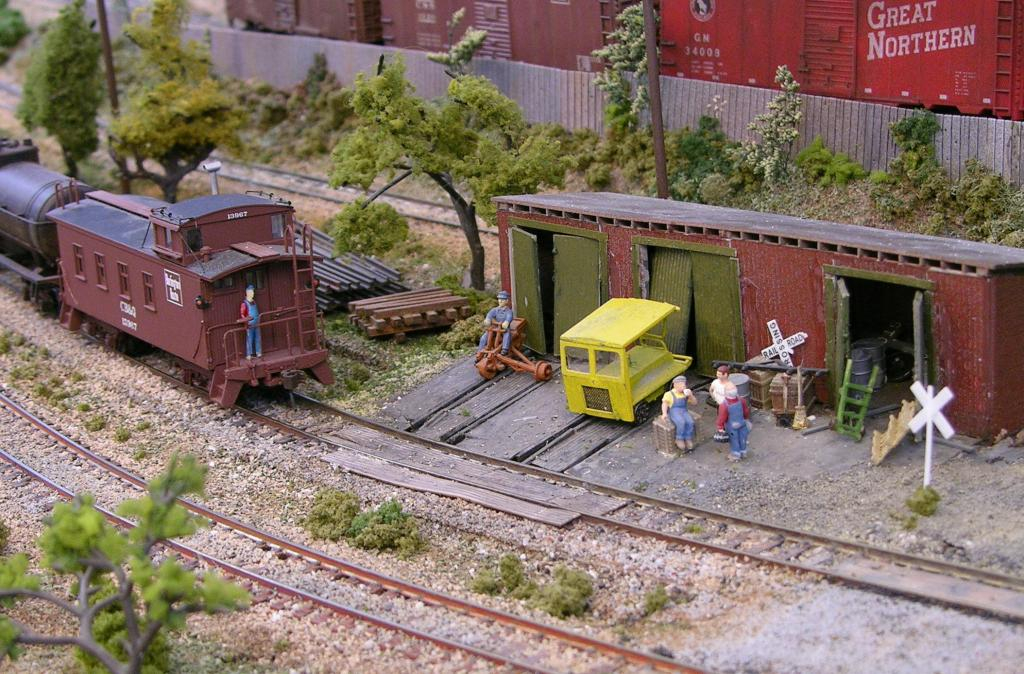 Nice picture Garry, top notch as usual. Like the details.

Day before yesterday's we had a very nice thundershowers that dumped about 1/2 inch of water in about 1/2 hour.

CURT, like the finishing touches .. You have done an amazing job.

KARL .. Like your latest "dead line" , but I don't see the oil stains? 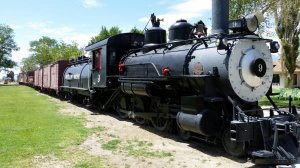 Mobile, Al has a tradition of inviting ships from the Navy, to come in to port during Mardi Gras. One year, the USS Alabama,(the sister to the San Francisco). Mobile's ship channel, at that time , was only 40' deep. The sub's have a deep draft when fully loaded. Prior to it's arrival, it stopped somewhere else, and off-loaded some "stuff". They never said what they unloaded, but there was speculation, that the Trident missiles was it. Instead of the sub coming in under its own power, three tugs were used to bring it in, to keep the sub in the middle of the channel, so it wouldn't run aground, possibly damaging the main sonar dome.

Even with the tugs moving it, the crew stood on the deck in their dress whites, Impressive Indeed! When the sub left at the end of the Mardi Gras, they had to tow the sub backwards down the channel until they were back into the Gulf, because even the turning basin for all the other ships, wasn't big enough, or deep enough to turn the sub. Due to the rather shallowness of the coast where the Bay meets the Gulf, the tugs had to tow the sub out almost 10 miles to get into deep enough water where the sub could move under its own power.

This was not long after her shakedown cruises, and her acceptance into the fleet, so she was basically brand new. During a ship's stay there, the ship is open to guided public tours, etc. Needless to say, there were no tours for the Alabama. I was fishing in my bass boat, in the Bay, there around the Battleship USS Alabama, and I was able to get a real good shot of the Battleship, and the sub as the she passed by about 1/4 of a mile away. This was shot on 35mm film as there wasn't any digital cameras on the market at the time.

I'll check my stash of photos, and see if I can find it or the negatives, and post the picture. (There's over 20 boxes of pictures that I have to go through, so it may take a day or two, assuming I can find the shot).

Did some more detailing on the layout. Put down Heki grass, some trees, bushes and mile markers. I have 2 Tattletales on order (already have 2 from NJI).

Garry- Awesome tool shed. You have a great eye for detail.

Carey- Great story. I get the shallow water. I was on the USS Tinosa (SSN-606) when it went in the yards in Pascagoula MS back in 1975. Of course it was a much smaller sub. 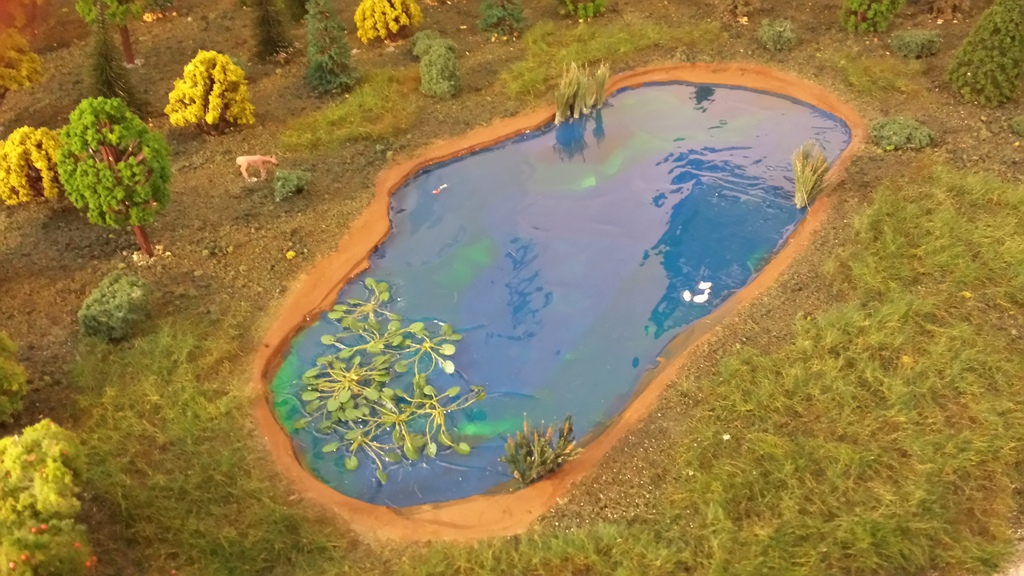 Is this the one Curt? 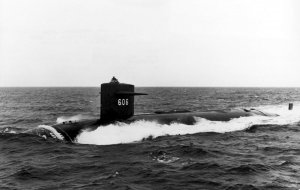 Montanan- Yes that is the one. There is a interesting and sad story with this class of sub. Classes take the name of the first sub which in this case was USS Thresher (SSN-593). As you know it sank with all hands and shipyard workers during trials after new construction. The class was renamed to the Permit class (next sub in class) and based on the investigation, a program named SubSafe was started (tracks critical parts from before manufacturing thru the parts life). Also based on the accident a new emergency blow system was installed on all new submarines. Before, the HP Air was 3000 psi that could be used to blow the water out of the ballast tanks in an emergency. After, a separate 4500 psi system was installed for emergencies. I can tell you that when the EMBT (Emergency Main Ballast Tank) blow occurs it is like riding an elevator to the surface. The sub that came out of the water in The Hunt for Red October was using emergency blow.

What was the sub that had a fire onboard around the same time as the Thresher? (+/- a year or several)
There is a guy I know who does work for my landlord occasionally who was on that boat when they had the fire.
After they fixed it, they renamed and numbered it - I'm pretty sure that's what he told me.

Big E- The 2 big ones that I am aware of off the top of my mind are:

2. USS Bonefish (SS-582). A diesel boat that off the coast of FL in 1988 had a salt water leak in the battery causing a fire that required the crew to evacuate the sub at sea (on surface). Damage from fire so bad boat was decommissioned.

These are the 2 that stand out in my mind.
S

Hi fellas! Been lurking mostly but still here.
I am very much enjoying the Navy pics, although my family is mostly groundpounders. Had a BIL in the Navy, a CPO.
Keep them coming.

Place across the street is back to the old bulls**t again. Man that gets old.
Kids all coming up for the 4th. I am excited. Haven't seen grandkids for a while. Oh yeah, and kids.
See ya later!
Kind of a overlook pic: 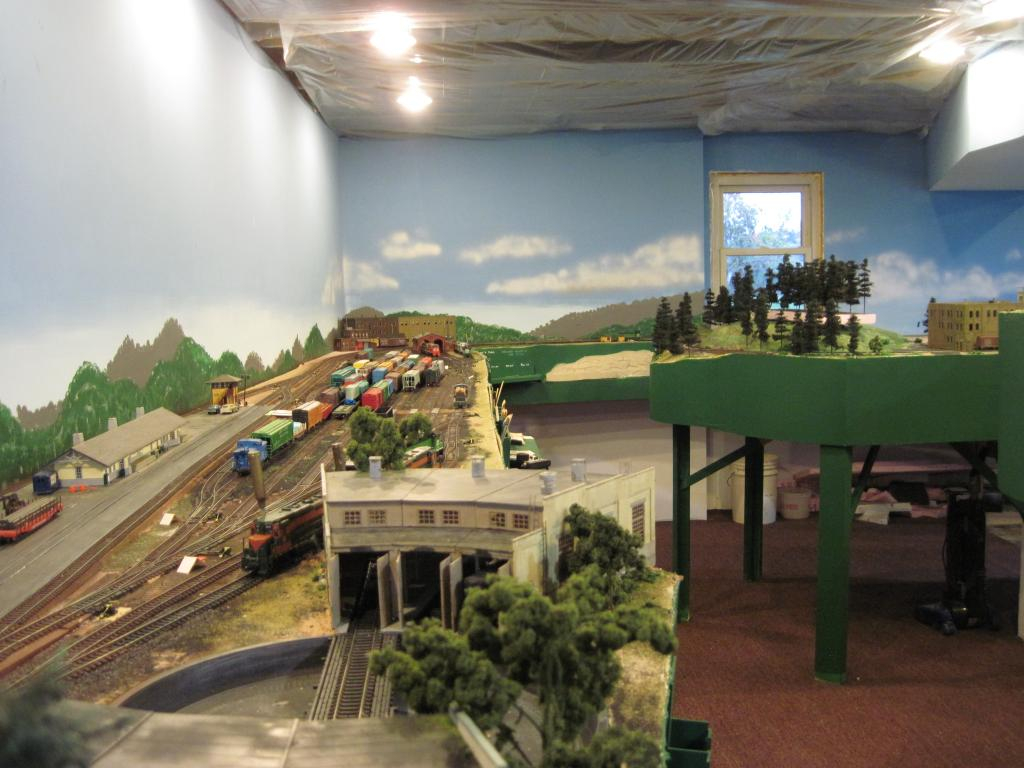 Curt: the Bonefish rings a bell.
Next time I see him I'll ask again.
E

I'm watching my backup program load everything onto my new laptop. I back everything up weekly, and this is the third time in the last 20 years I have really needed it.

Staff member
I was rummaging through my photos after getting them migrated to the new laptop, and found this one I took. People who have been there should recognize the area:

bnsf971 said:
I was rummaging through my photos after getting them migrated to the new laptop, and found this one I took. People who have been there should recognize the area:

Terry - would that, by any chance, be the D&S Piers of the Norfolk [VA] Naval Base? I was stationed on a Destroyer Tender (USS Puget Sound AD38) there during my last couple years in the Navy...