The access openings around the base of the airfield were taped over and it was lifted into the place where the quayside had been. Since it is 8 feet long, it would have got in the way of the ladders at the other end of the floor had it been on the left side. 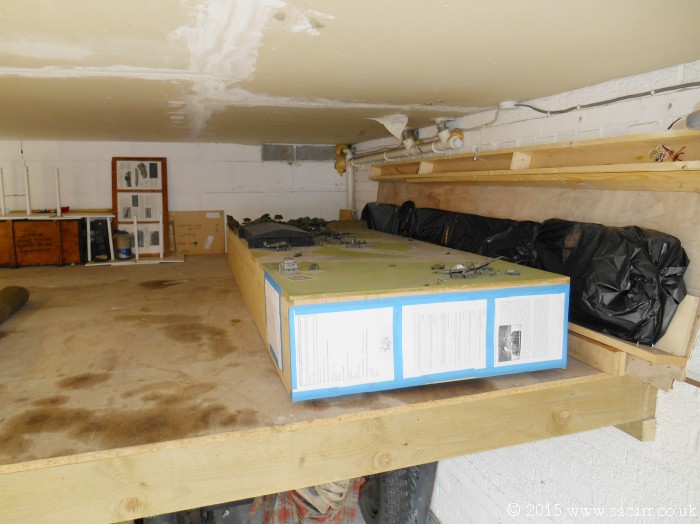 The shorter six feet long quayside was then lifted up to sit next to it. 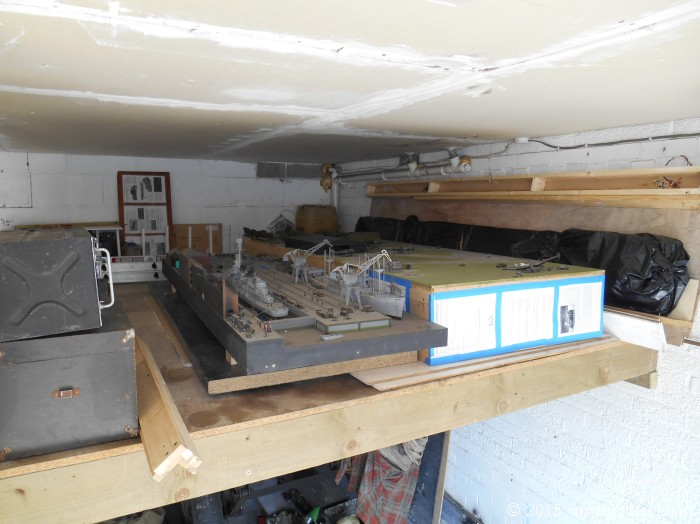 With those two sections up there, and the camping gear that had been there now in the trailer, the four feet long goods yard was lifted up on its side. Two temporary legs forming an inverted 'T' shape were screwed onto the ends to stop it tipping over. 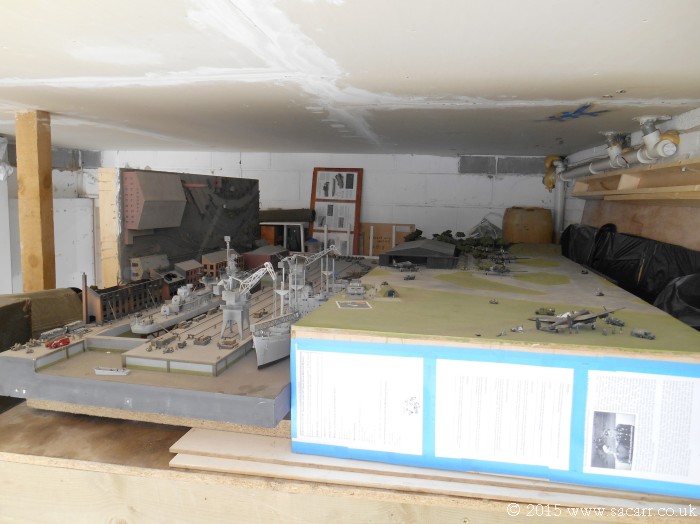 Finally the station was moved to the middle of the workshop floor. This allowed me to walk all the way around, and have both end benches free to use. The Mine section will be built to fit onto this end of the station. 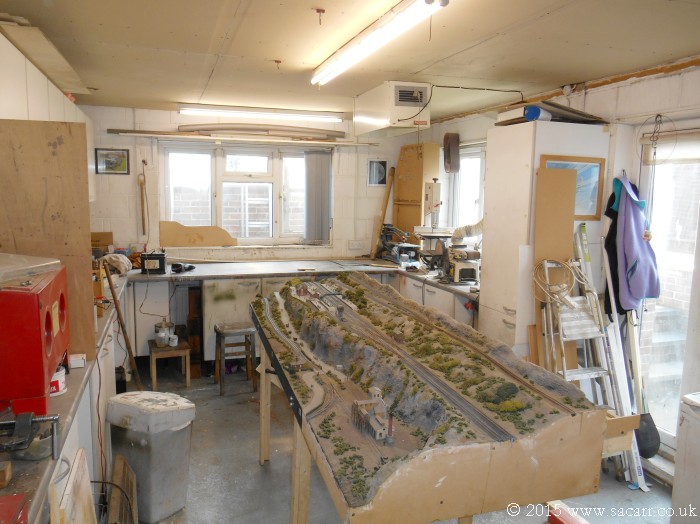 Stephen
Long time no posts
Things progressing with the project?

The customer put the project on hold again back in June, so nothing to report.
C

Hi Steve this does look like a pretty exciting project, hopefully the customer comes back around.

Unfortunately, due to an increasingly poor exchange rate, my customer has had to pull the plug on this project. Bar a few odds and ends that need finishing off and checking, that's it for major construction. It is planned that the layout will be delivered some time early next year.

Disappointing though it is that it has had to come to a halt, my customer and I have a contingency plan, which would allow construction to resume at some point in the future, should situations change.

To the left of the Airfield, and to the right of the Country Station, the tracks leave the boards for further, as yet un-built sections. With the layout heading to Ireland, it would be rather difficult to continue the build without having access to the layout.

However, my cunning plan is to build a three inch piece of the next section for either end. The bench work, scenery and track will be finished to match the existing layout, with connections made for wiring between the pieces. I will retain these two small additions for the future. The small size of the pieces will take little storing. Should the project re-start in the months or years to come, I can simply extend these three inch sections into a full section, knowing that they will already match up with the existing.

Before I show any progress of that, I'll add some pictures of some of the built and refurbished accessories that were to go on the mine section, and which one day may still be included in the build.

The Mine shaft winding house; before and after refurbishing a second hand, already assembled kit. 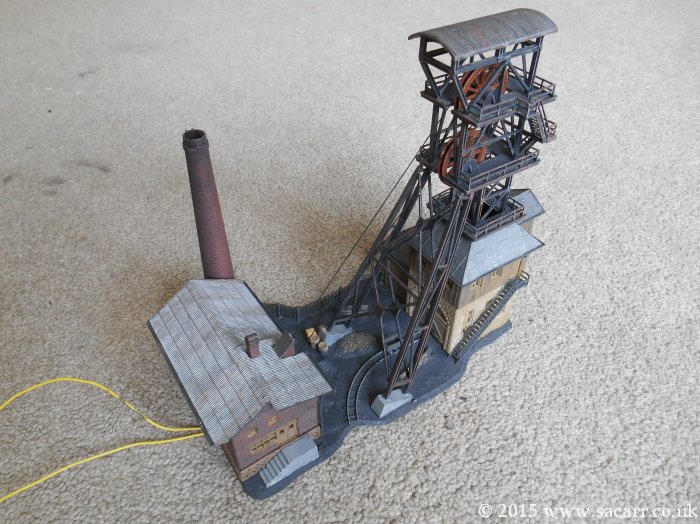 Coal storage and loader; another second hand assembled kit before and after. 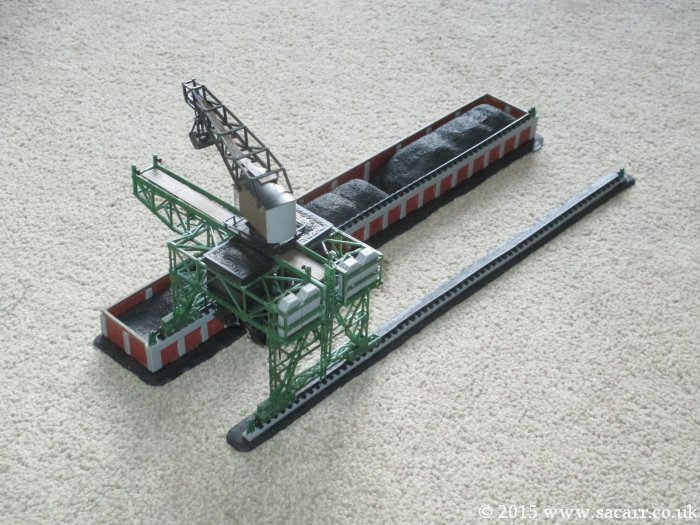 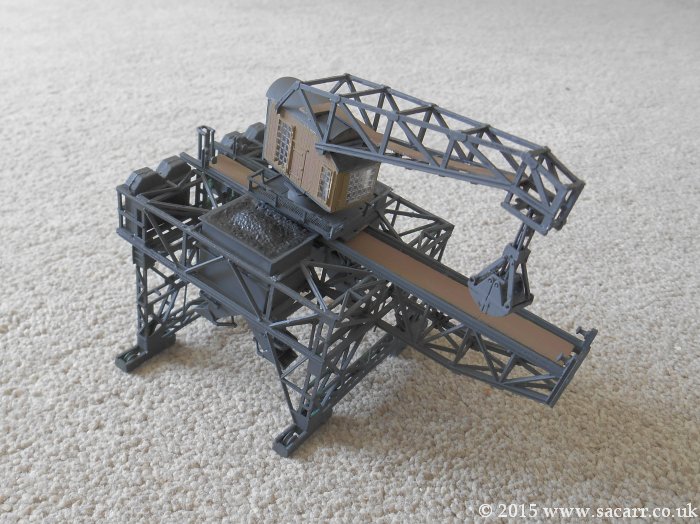 More coal processing and loading buildings; once again, second hand buildings before and after refurbishing. 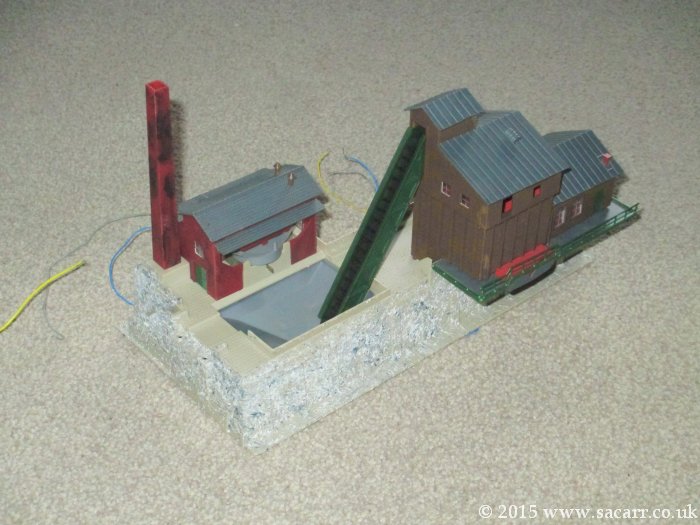 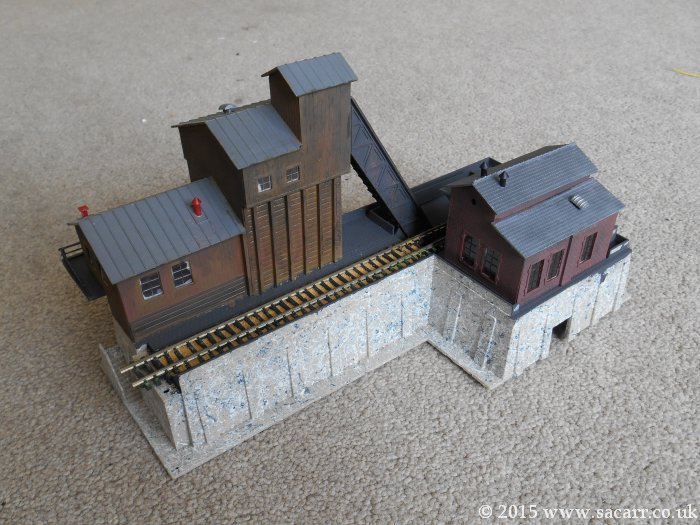 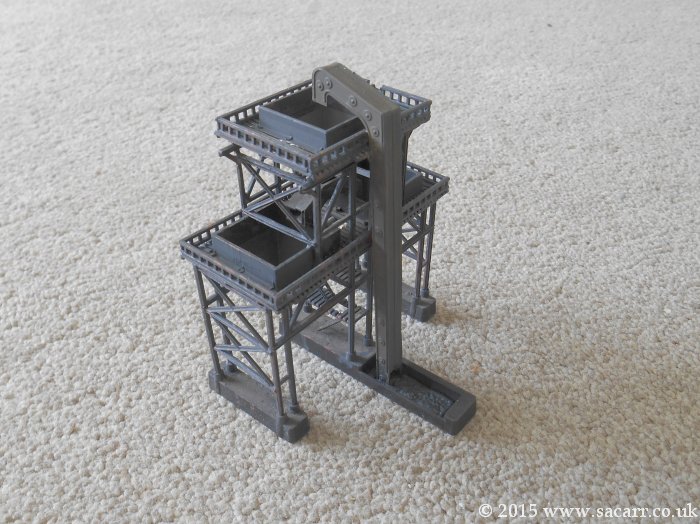 This Junkers Ju88 medium bomber was to have crash landed in a field near the mine. There were to have been Home Guard troops watching over it, and possibly holding the aircrew prisoner. It was mostly built by the time the plug was pulled, so I finished it anyway. 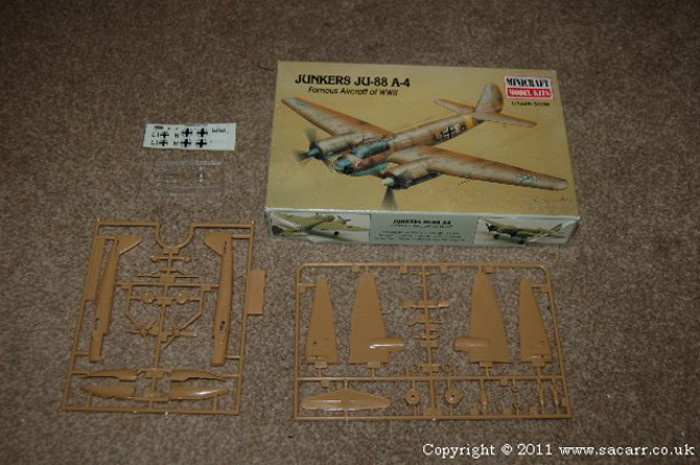 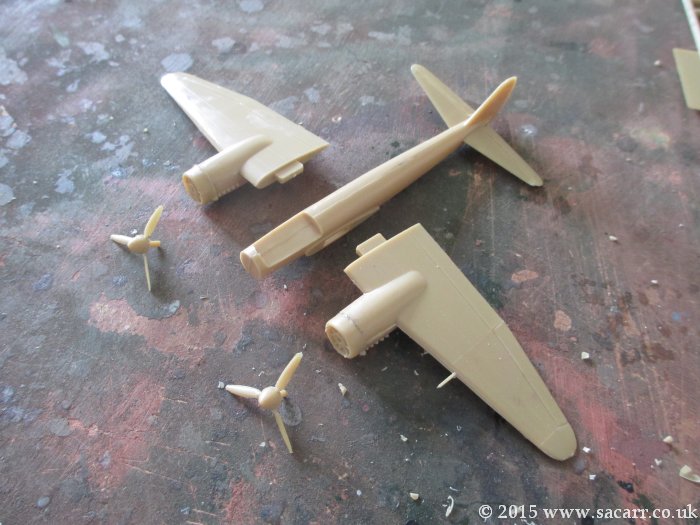 Damage to the wing and propellers following the forced landing. 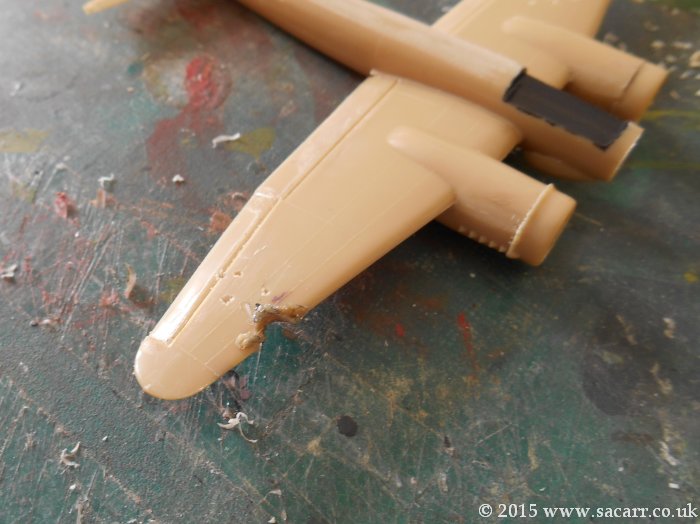 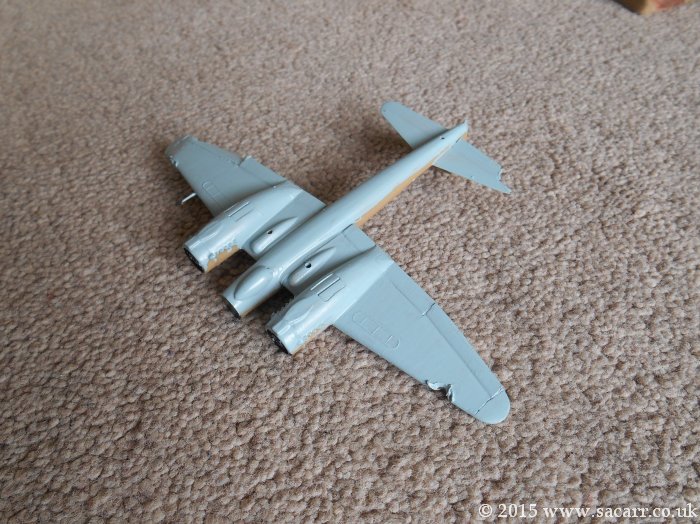 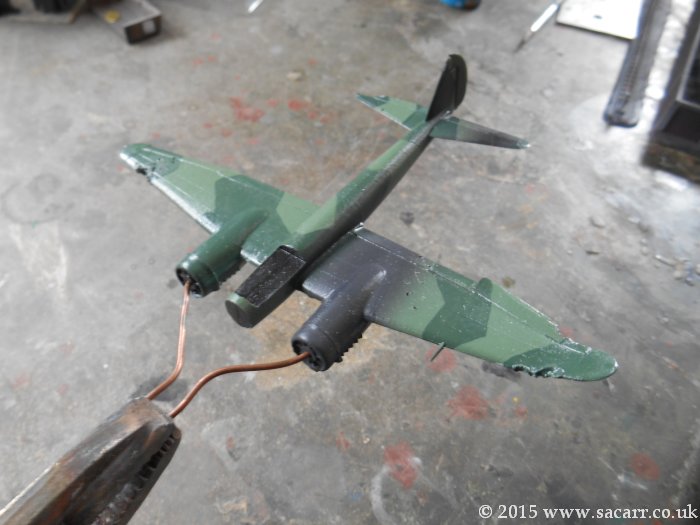 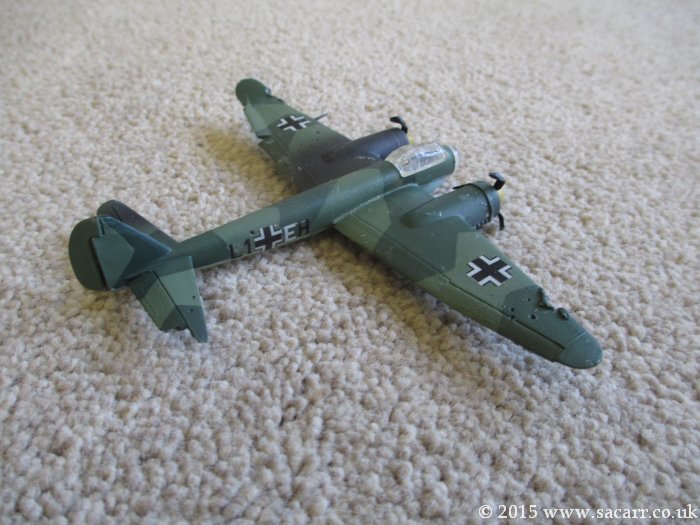 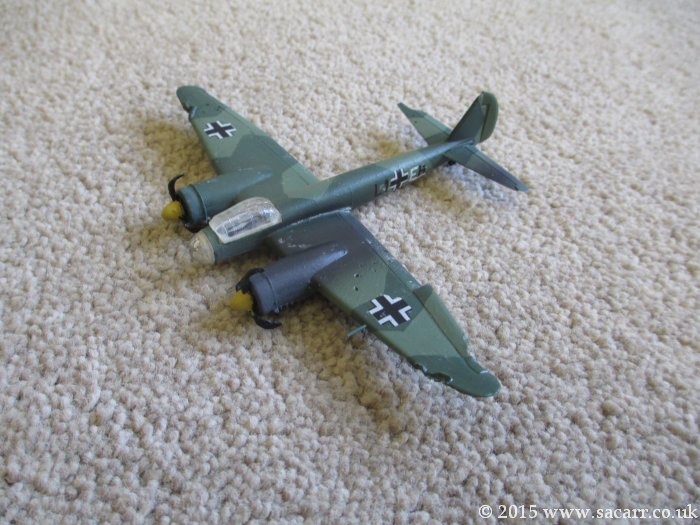 Here's the start to the three inch extension to the Country Station, which may one day become the planned mine. 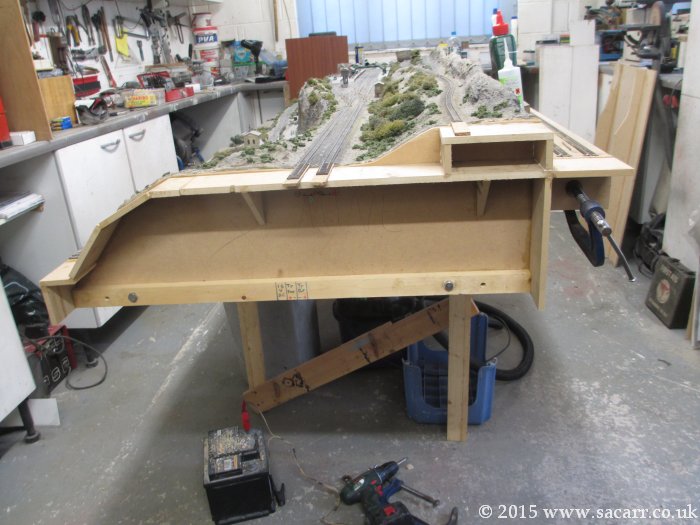 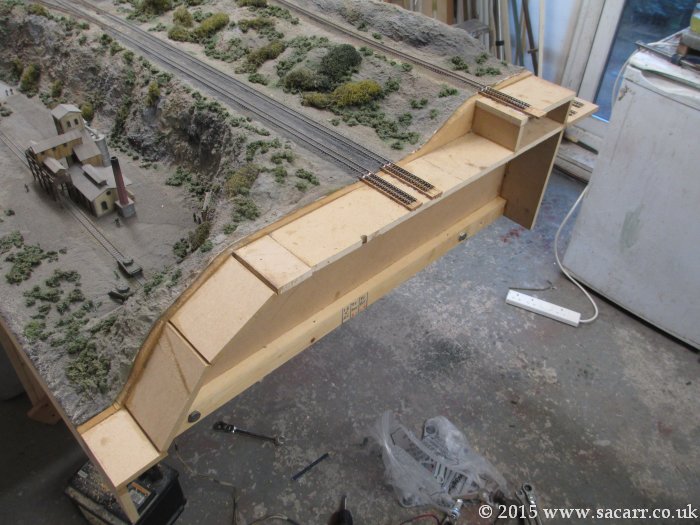 This piece was started yesterday, and today received the track, plaster and ballast. Clear plastic sheets form a barrier between the sections so I had a smooth edge to cast the plaster against. Once fully dry, this can be tapped and chipped down to the same level as the station ground works, and ground colour can be blended across the two pieces. 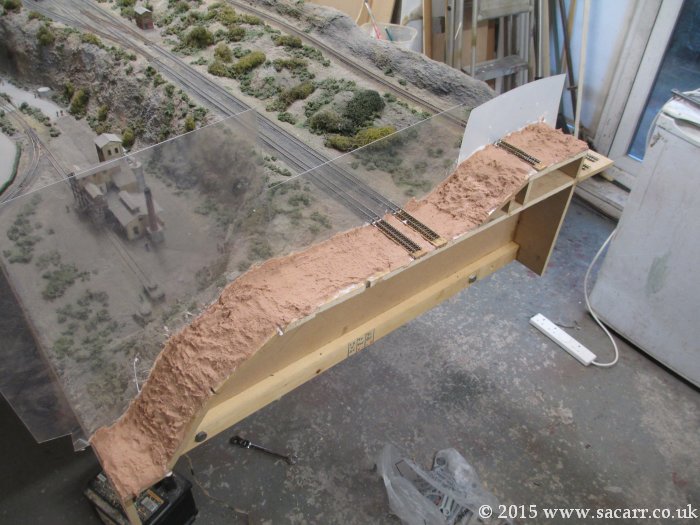 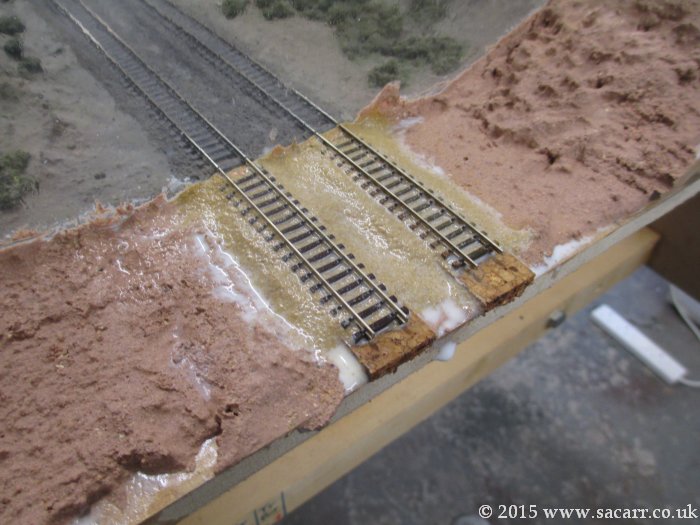 Once the plaster and ballast had dried properly, the plastic divide was removed, the boards were bolted up tight, and the plaster chipped and gently hammered along the joint so that the contours matched.

The plaster was painted and some of those colours were carried back onto the station section. 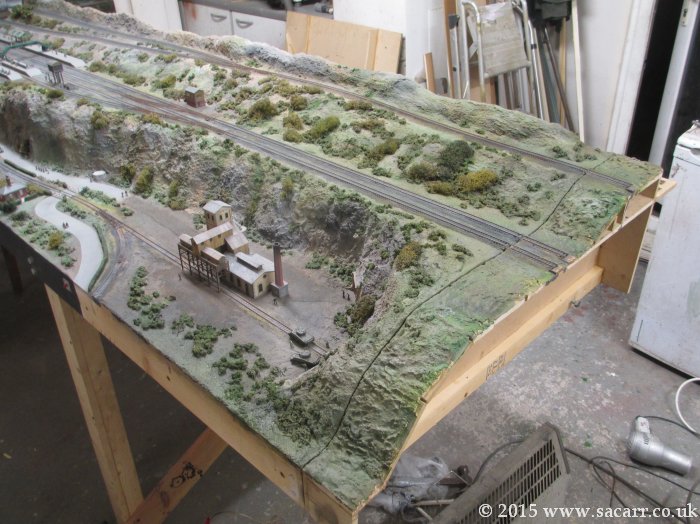 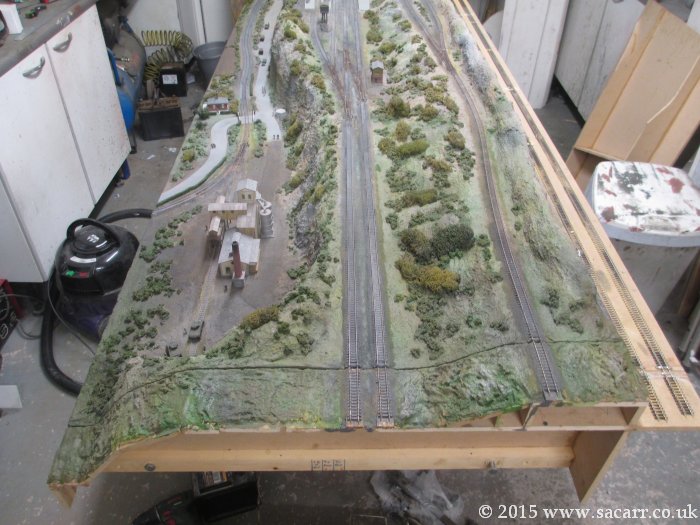 The backscene had previously been painted sky colour and had clouds added. It was screwed up to the new extension, and the hillsides continued onto this new piece. I still had the mixed colours sealed in pots, so matching up the colours wasn't an issue. 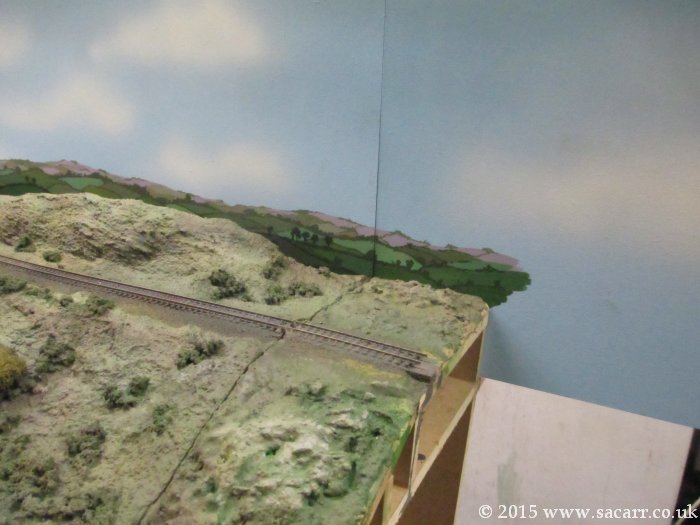 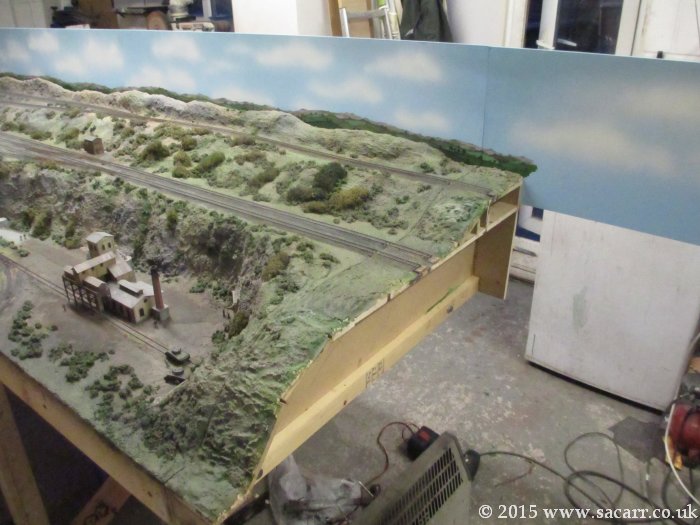 The last couple of pictures show the landscape back through the depth of the layout and on into the backscene. 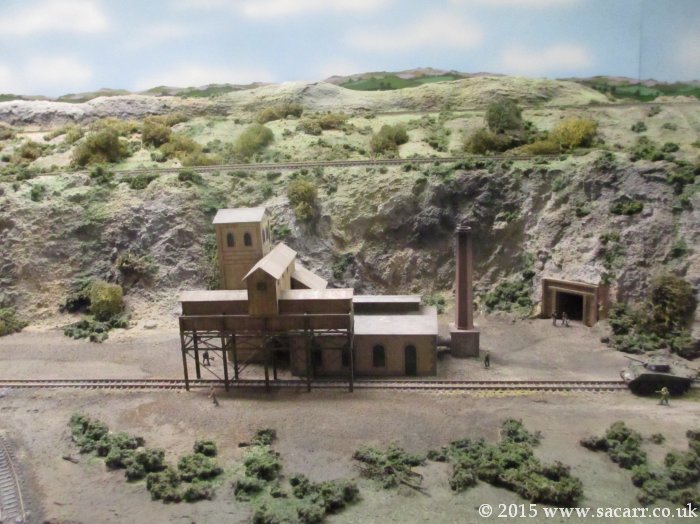 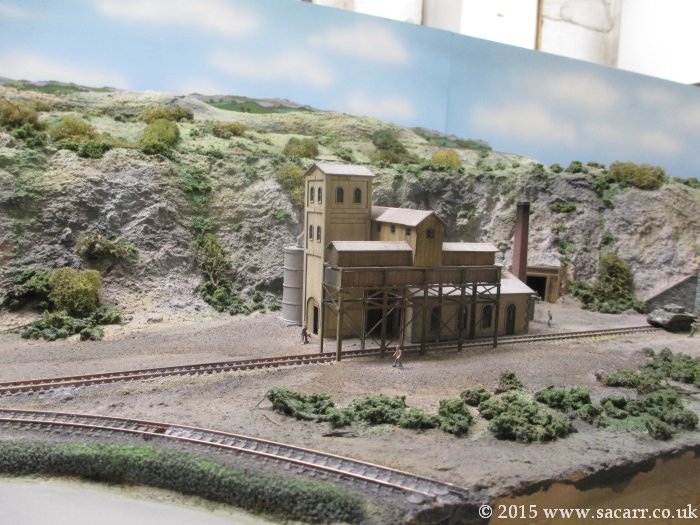