Hey Stephen great to witness some of your great works again, its been quite a while.

Since the last update, I've continued working on the runaround boards that go down the back of the airfield and country station. All the track joints have had jumper leads added to carry the power across rail joints. 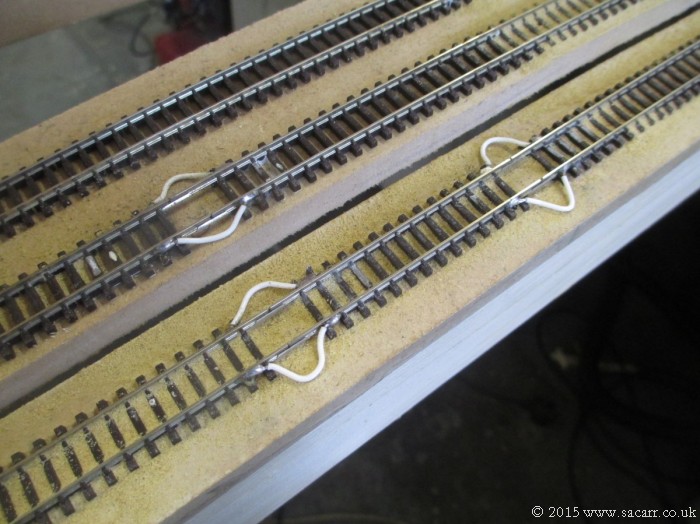 The track has been partially ballasted, purely to help hold it in place along the eight feet long sections. 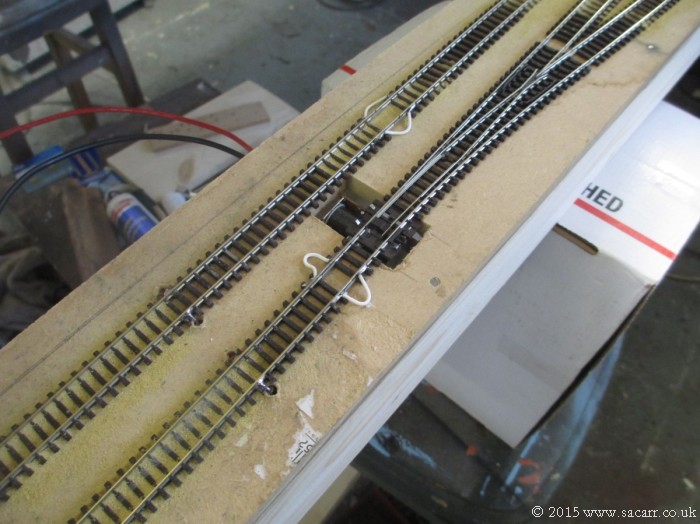 Large gauge power leads were also added on these tracks to connect to the buss cables on the main sections to avoid voltage drops on the long runaround. Point motor wiring was also fed through a hole in the structure to connect up to the decoder wiring. 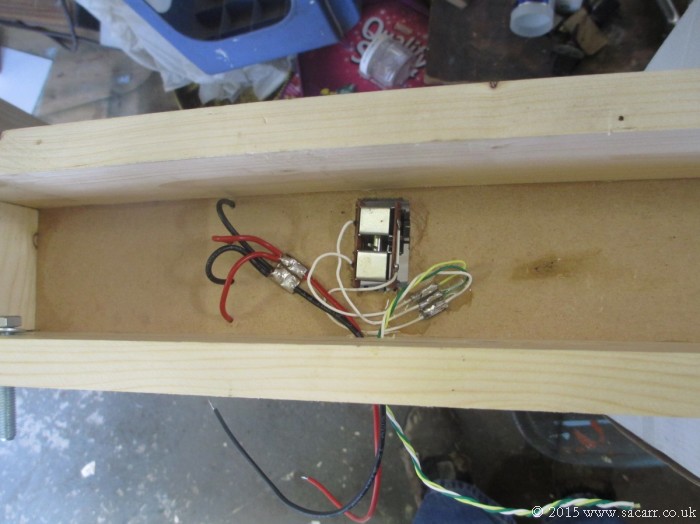 Because the Country Station section didn't have a solid back like the airfield, I had to add three upright supports onto which the runaround section would bolt. 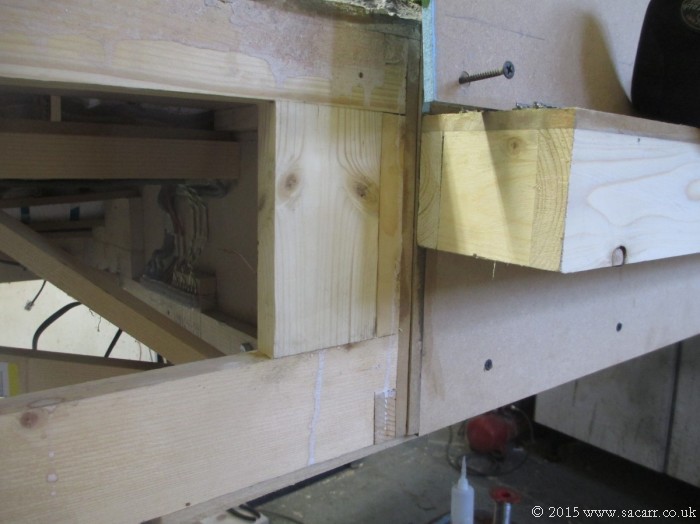 A metal dowel was used to align the sections while the tracks were soldered to copper clad board, glued to the board edge. 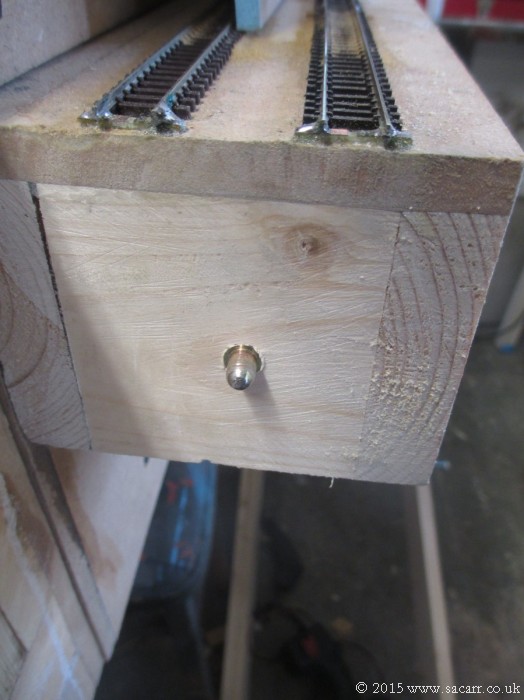 The start of the second runaround board. The timber support was bolted in place first, then the MDF track bed glued in place. Because some of the timber had warped slightly, I built the section while it was bolted to the station, in order to keep it true and fitting correctly. 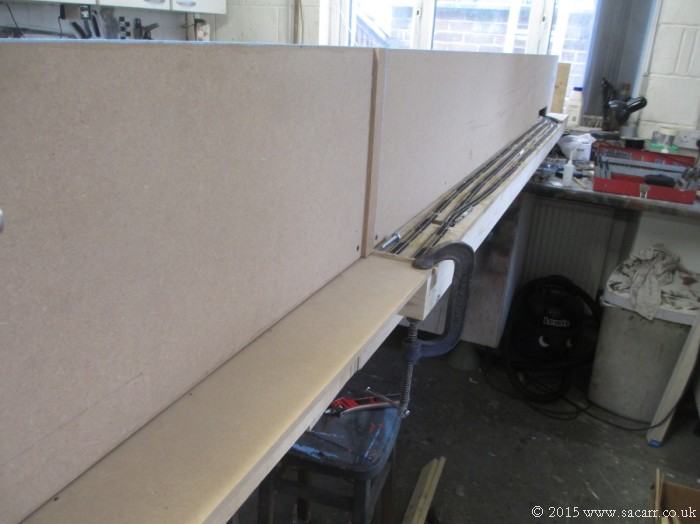 The second runaround complete with all the track attached and wired up. 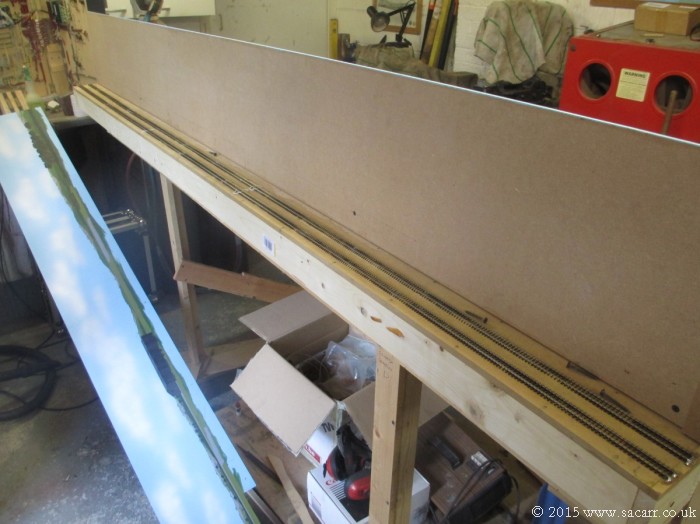 The next step would require the sections to be separated again, so I got a couple of snaps along the tracks. Here's a view down the main lines, around a scale 1/4 mile to the tunnels in the distance. 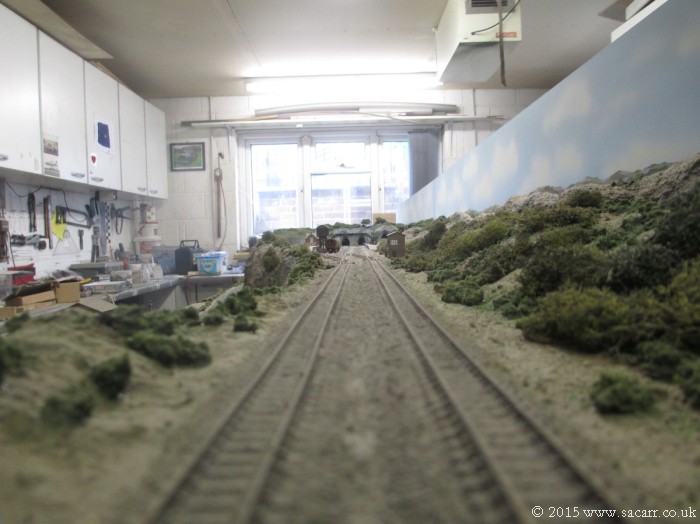 So the sections were pulled apart and the airfield turned on its side so I could easily access the wiring and electrics. 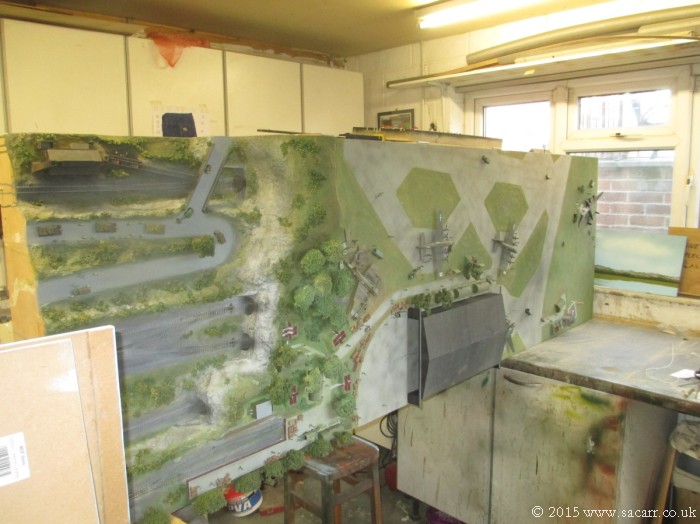 I needed to program the DTM30 and DAC20 control panel and points decoders. It had been some time since I'd last done this, and having had to replace my laptop hard drive a few months ago, I had to reinstall the Locoanalyse software and PR3 interface drivers. 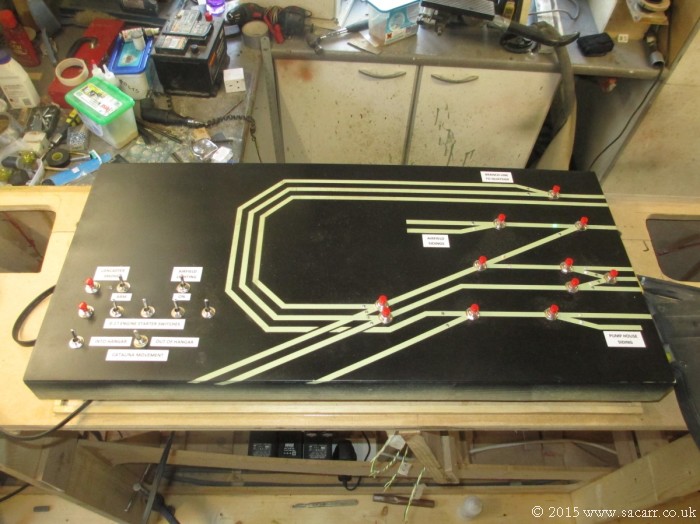 Because it had been so long since I had done this, I couldn't remember how to connect everything up, and even what had to be connected. The manuals weren't particularly helpful, so it took several hours of frustration before the penny dropped. I finally got the computer talking to the decoders, by which time I had to stop and pick my daughter up from school! Here's the Digitrax command unit, the PR3 interface and throttle, all connected via 'Loconet' to the layout. 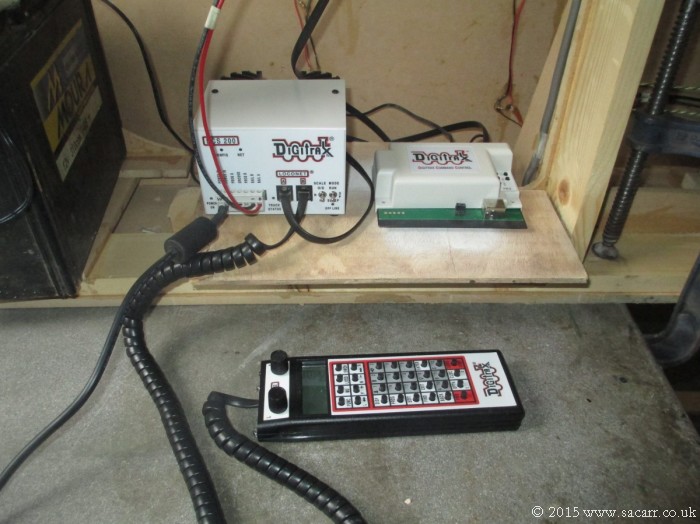 The inside of the airfield control panel. From my experience, DCC makes things overly complicated. If it were mine, I may have gone DCC for the loco's, but would have kept the points on a simple 'contact and wand' circuit to operate the solenoids. 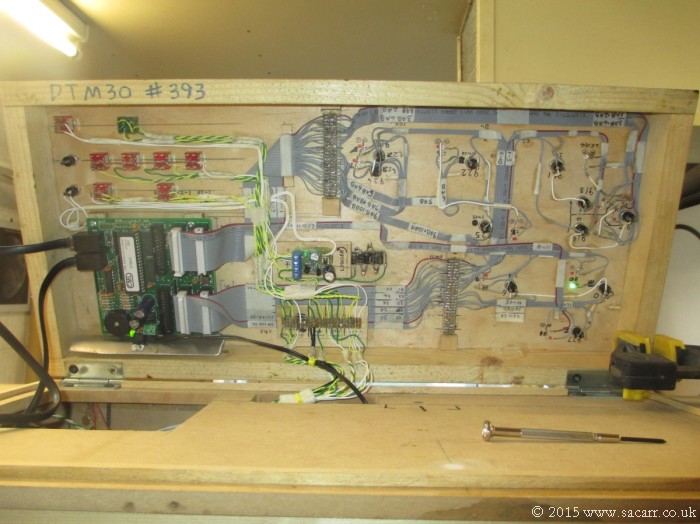 Here's the DAC20 points decoder with seven of the points wired in. The other points on the section are operated via a decoder on the station section. 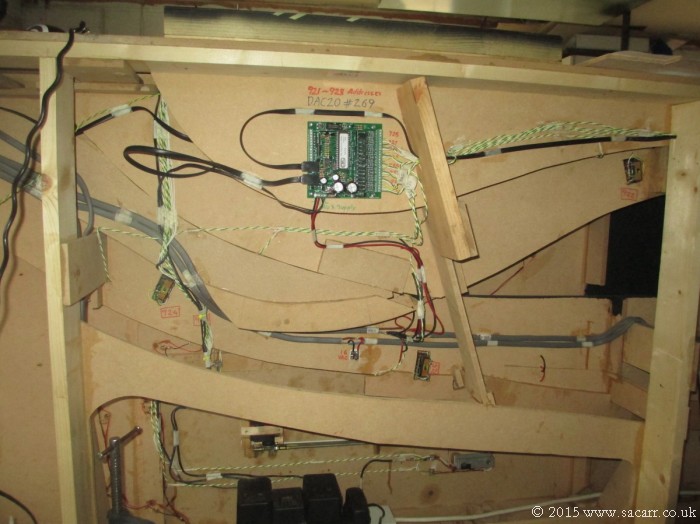 Finally by school pick up time today, I had some LED's working on the control panel, but that's another long frustrating story! 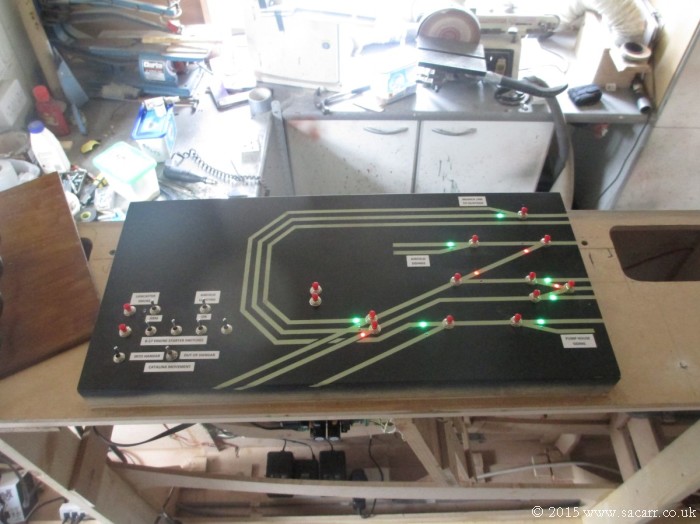 A short five minute tour around the airfield yesterday -

Enjoyed the video very much. You've really done some nice work there. I have been following this thread for a long time but never commented before.

How about a video showing the entire layout. I am a World War II buff and really enjoyed seeing the photos of your work.

Well! My workshop isn't big enough to fit the whole layout ( as it is so far ) together. It won't be ALL assembled until it gets to my customers house. This is as much as been assembled so far..... 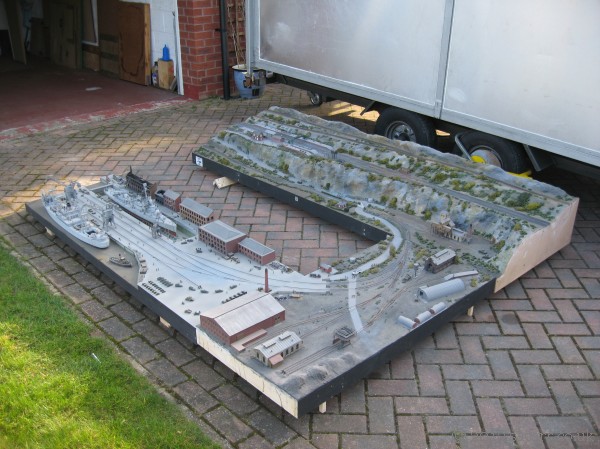 The other sections are stored and aren't easily accessible for pictures now.

Thanks for the reply. I understand completely. When the time comes, please do make a video.

Last week got quite frustrating when I started having DCC problems.

Everything was working on Wednesday, the control panel was changing the points, the LED's illuminated correctly. I switched off, went to do something else, came back and couldn't get track power. The handset was illuminated in standby mode, but as soon as the track power switch was turned on, the display went out and no power. No warning bleeps, nothing to indicate the problem.

Several hours later, after reading the manuals again, and searching the net, I found out it was the command station back up battery ( now 4 years old ). When this goes flat, it can't keep its memory, and resets its memory to a condition where it won't provide track power. It is meant to bleep 7 times at power on to indicate a flat battery, but it didn't. May be the battery wasn't quite flat enough, but with the unit not being regularly powered up, the drain may be too much between power ups for the near flat battery to cope.

All seemed well with a spare, partly used battery I had ( until I can get a replacement ) and it worked again. It is meant to beep 7 times at power up to indicate a flat battery, but it didn't make a squeek!

Then on Friday, the control panel wouldn't initialise all the points on power up. All the LED's just flashed and it wouldn't talk to Loconet. Several more hours later, I traced that to a setting that had changed. Whether this was as a result of the battery failure, I don't know. It had changed the control panel PCB into Slave mode, where it wouldn't do anything until it was re-programmed from the laptop.

Who was it that said DCC just needed two wires to the track?

Some additional labelling was made for the control panel to help identify tracks, and where they go, in addition to the point decoder addresses. 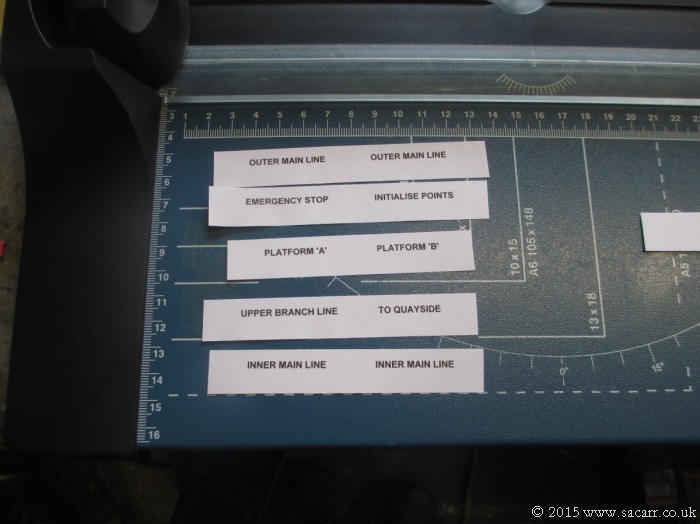 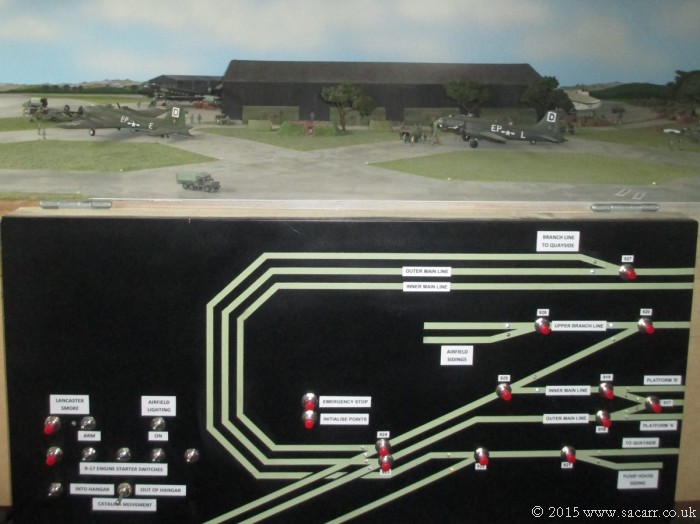 While there hasn't been any physical progress on the layout recently, I have made progress in other areas.

From pictures like these, it should probably be apparent that there is some considerable mileage of wiring in the layout. A lot of wiring!! As I've also mentioned, the layout isn't mine, it's for a customer.....in another country!

I'm not going to be able to pop in to problem solve any wiring issues that may come up in the future. As a result, I decided it would make sense for the owner to have an operators manual with wiring diagrams for everything. No simple task, but very essential for the successful future operation and fault finding of the layout. 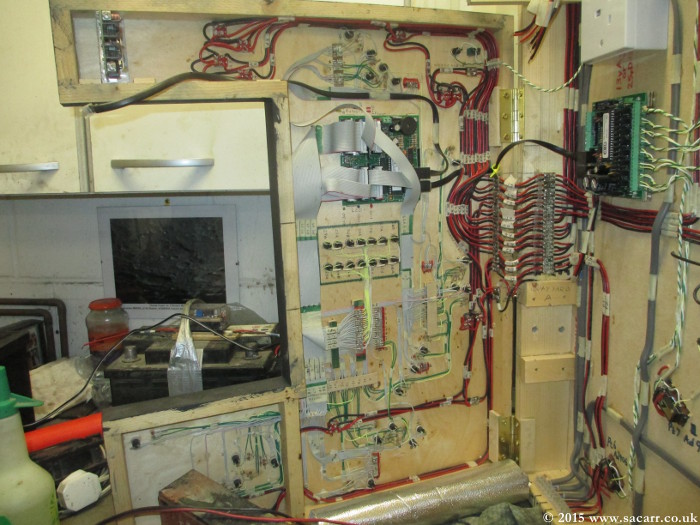 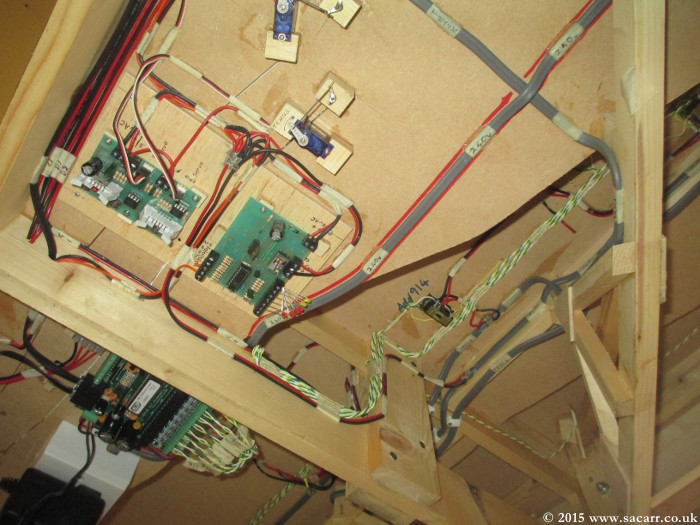 This is just a small crop of a much bigger 'track power' diagram, but begins to show the extent of the spiders web of copper spreading below the layout. 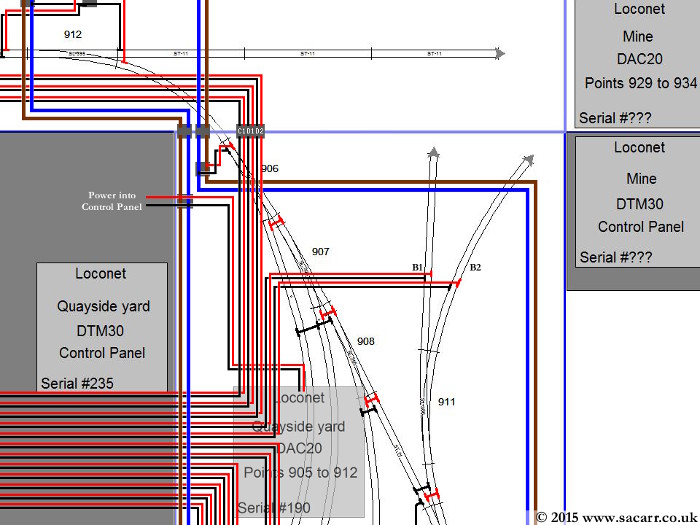 Absolutely great wiring, it shows how much work is actually done out of sight on model railway layout.
As an electrician I love this part of modelling
Keep the good work comming

Cant wait for the next exciting installment

That is some impressive wiring my friend ... You've done an excellent job maintaining order down there ... That was always my nightmare when troubleshooting a friends layout ... His wires went everywhere with no rhyme or reason ... I'm sure if any issues do arise the extra work will pay off.

Do you intend to keep a copy of the manual for over the phone tech support?

I think that would be wise!

A few weeks ago, my daughter came into the workshop to see what I was up to, and ended up "playing trains" along the lower branch line of the country station section, up into the tunnel under the airfield. We couldn't run much further, as the airfield section track was dirty, and with the left end of the layout resting on my work bench, I couldn't get underneath to clean it.

I was going to have to separate the sections again, and move the airfield to give it a proper clean, the first track clean since testing after the track was first laid. 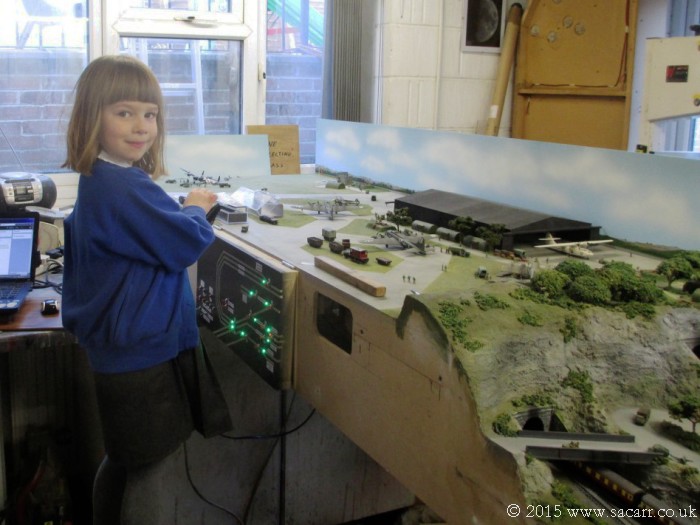 It was nice to see a steamer with three coaches running down the bank to the level crossing. 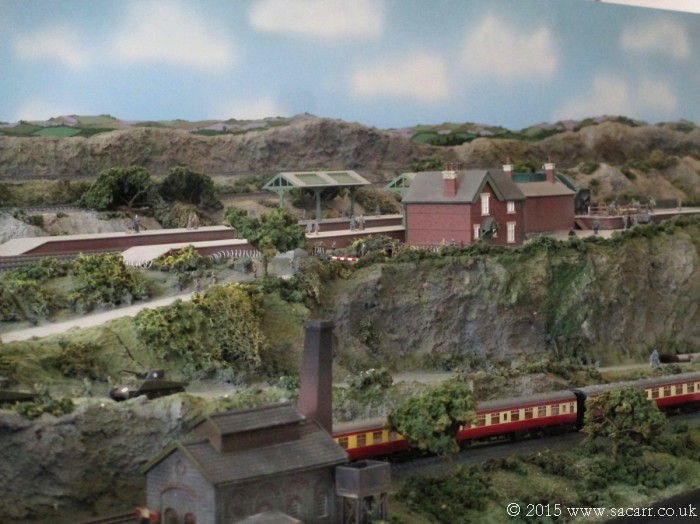 I couldn't help myself but add some smoke in Photoshop. 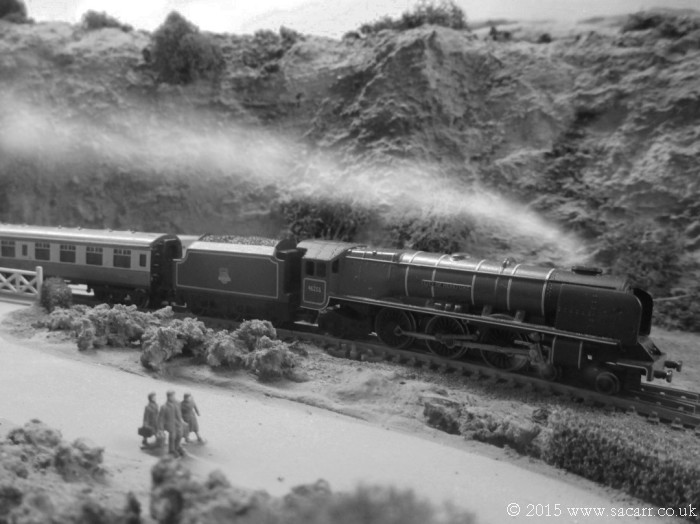 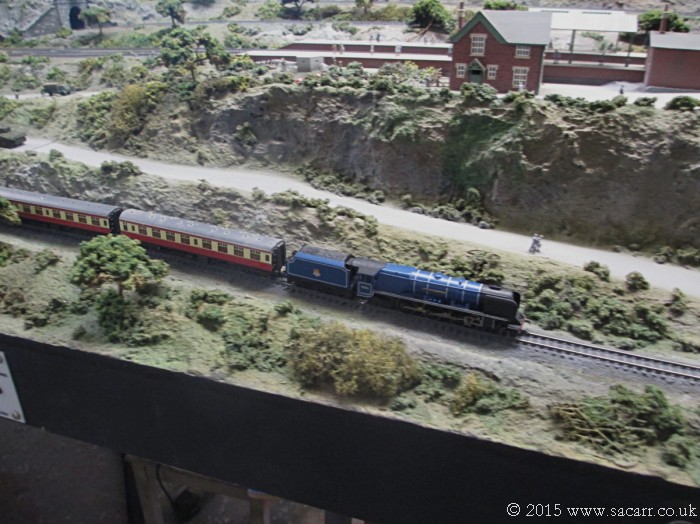