This is not my collection, but a friends in Colorado. He said these bins are available at Wal Mart and Target.

wheeler1963 said:
This is not my collection, but a friends in Colorado. He said these bins are available at Wal Mart and Target.

Jerome, those boxes are perfect!!! I like that. Clean and and accessible.

Any way to make those pictures bigger? I'm really interested in getting some of those. I've seen those bins before but never thought about using them for cars and engines!

I couldnt get the pic to go bigger either...

I store my (G Scale) trains and small stuff like people and animals indoors on bookshelves. The track stays outdoors year 'round. I store the buildings and other accessories outdoors in plastic utility cabinets.
U

Jerome, I'd sure like to know more about those plastic cabinets too. I've seen hobby shops more poorly organized than that.

Claudia, nice to see you. I can see why you need some big cabinets for all those G scale buildings.

E-mailed Jay to get full size pictures. Hopefully I'll have them by tomorrow. 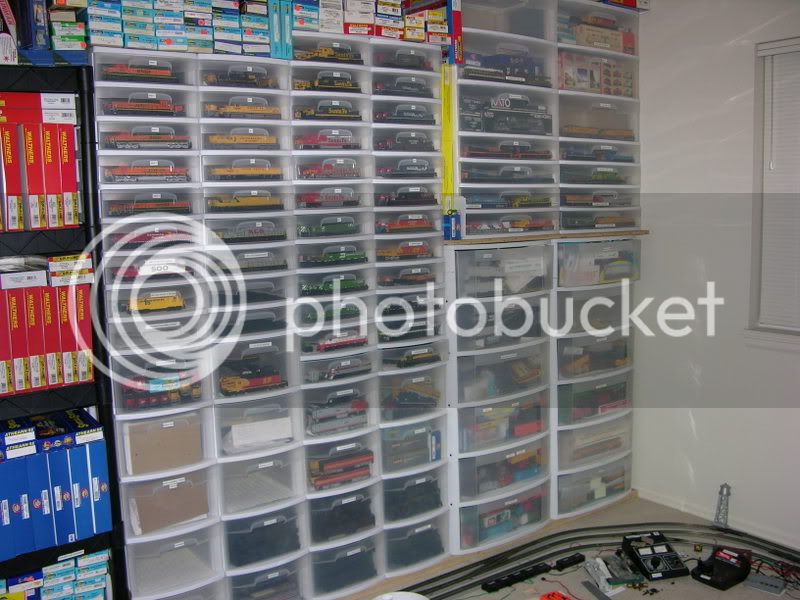 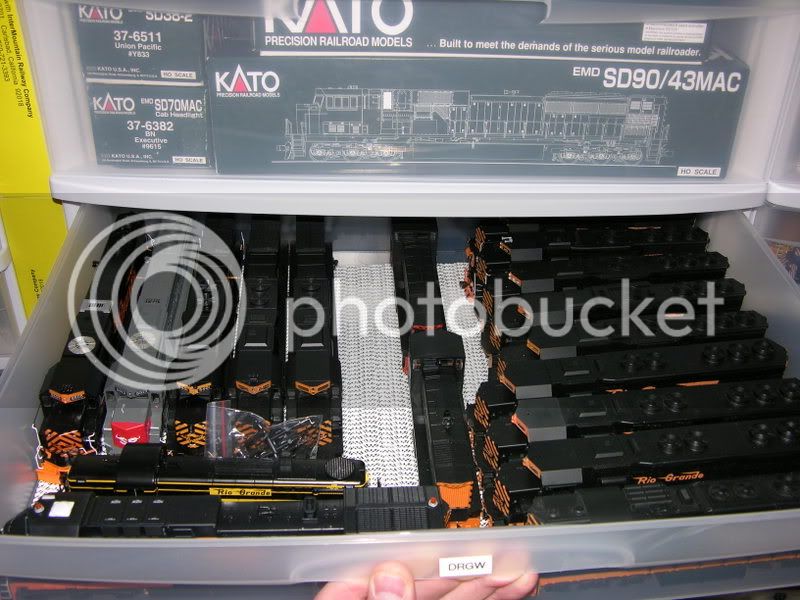 WOW!
That is pretty slick there! I kinda like it except I would probrably have little card inserts between each loco or something. Very nice though. All organized. Looks like he is doing all of the Major RRs! Impressive! I see he has a test track of some sort on the floor. does he have a layout? or does he belong to a club? Very cool!


Give me your friend Addy, and will pay him a visit while he's at work! He's got to many train's to be able to fully enjoy them all! I got's a truck and trailer All we need is and hour!

Jerome remember this talk never happen See ya there soon
U

Chris, LOL, I do that collection could use some thinning out. I doubt he'd miss a few of those if they somehow disappeared.

Jerome, are sure he doesn't own a hobby shop? Are these all Rubbermaid type storage drawers he picked up at Walmat and then just stacked on top of one another? Any idea how much he spent on the storage setup alone?

UP2CSX said:
Chris, LOL, I do that collection could use some thinning out. I doubt he'd miss a few of those if they somehow disappeared.

Jerome, are sure he doesn't own a hobby shop? Are these all Rubbermaid type storage drawers he picked up at Walmat and then just stacked on top of one another? Any idea how much he spent on the storage setup alone?
Click to expand...

With that many trains. a couple could go missing and the dude might not realize it for months!

Um I don't think you'd want to go there and have a few go missing. He's a Law Enforcement Officer. Locked, Cocked and Loaded!!! LOL

Yikes! Nope but I'd like to be his friend! Does he know about our website here? Sh Chris this could be a problem ya know....lol
N

I built a rolling cabinet, one for locos and one for rolling stock. Each one fits under my layout, and has trays, with about 10 tracks in each. I will post pics when i get time. Mike

UP2CSX said:
Chris, LOL, I do that collection could use some thinning out. I doubt he'd miss a few of those if they somehow disappeared.

Jerome, are sure he doesn't own a hobby shop? Are these all Rubbermaid type storage drawers he picked up at Walmat and then just stacked on top of one another? Any idea how much he spent on the storage setup alone?
Click to expand...

Jim, I believe the brandname is "Sterlite". No he doesn't own a hobby store, he's a police officer. Just happens to love trains too!! I'll ask him about the costs of all of the bins. I'm going to start off a couple each payday. Should get there sometime next year!! LOL

Here's what jay said about the costs.

Under $200 for everything. They are about $18 for 3 of the deep narrow and 4 of the shallow narrow ones at Walmart.

I have a screw through all for corners on the tall ones at each connection point so the weight doesn’t make the sag. I do have a tower of the deep narrow ones in a different corner where I have my intermodal cars and containers, bottom few drawers in that has track and cleaning stuff for track.
Last edited by a moderator: Dec 23, 2008
B

I bet I would notice if anything went missing. Jerome told me about the forum so here I am. I spent less than $200 on the shelves, works great. Everything is exactly where I want it and easy to get too. No I don't own a hobby shop but I keep a few in business.

Cool, thanks for the information, Jay, and welcome aboard here. They look like the Walmart type bins I've been buying. Now that I looked at the pictures again, I can see where you ran the screws in the corners - good idea, since they do tend to sag. That is a fabulous collection you've got. Let me guess...you're not married. I showed you pics to my wife and she about fainted. I don't think I'm going to be getting that much stuff any time soon.

I'm a retired deputy out of California. Chris and I were just kidding abour liberating a few of your locomotives. Of course, you can never tell with Chris. He owns a lawn service company in Florida. I suspect that he might be offering you free yard care if he was in Colorado.
B

The narrow ones are from Walmart, the wide ones from Target. They are both Sterlite but the two don't match up so that's why they are in separate stacks. That is quite a few years of collecting, and nearly all the Athearn Blue Box in the roads I was looking for. Not ALL of the drawers are full by any stretch, multiple drawers for roads in most cases (like BNSF, BN, SP, and UP...separated in drawers by type of engine).

I'm actually in federal law enforcement, so is the significant other of 6 years(she's an agent also) and there isn't much problem with spending money on trains...or Harleys, my summer hobby.

I like this storage system because it can be added to easily, keeps everything organized (I have a workshop in the garage that I use similar drawers for detail parts, handrail sets, motors, paint, etc.).

I am still part of a group of police and firefighters that refurbish trains and give them to childrens' hospitals and a couple Shriners' Hospitals now. Seeing how easy Athearn was to work on I decided to stick to them for my own stuff with a few exceptions, mainly engines that Athearn doesn't make (I have a separate drawer for Kato, one for P2K and Broadway Lmtd, one for Bachmann Spectrum, and one for Walthers and Atlas...there's a lot of empty room in those drawers).

I read a couple more posts up now, and I don't have a layout, 3 rings of track (as of Saturday two are DCC finally) and one standard DC. I am not in a club, there are some here in Colorado Springs and up in Denver but that's not really something that interests me. Jerome has forget more about Athearn than I'll ever know.

Thanks for the welcome...glad to help with storage ideas...that's enough typing for a while