Well guys, I did it. Lone Wolf once again. After 19 years, I am no longer a member of the FCSME.
Between my work schedule, projects here at the house, trying to build my own layout and a litany of small issues with the club itself, I called it quits today in a nice email to the club Prez. Ill still do railroady things with a few members, attend and eventually host run sessions and such, just not as a member, and now I can sell the trailer and "retire" the truck and disassemble the modules.
Wait til ya see whats next!!

Time for me to call it a night. Went to town today to get refills on my prescriptions and get a pizza. I found that all my prescriptions are expired. So it looks like they won't be filled until sometime tomorrow or Friday. I did get the pizza though. A Domino's large thin crust meat feast. So the trip wasn't a total loss. I learned that a Niagara I recently sold arrived safely at it's destination today. See y'all tomorrow. 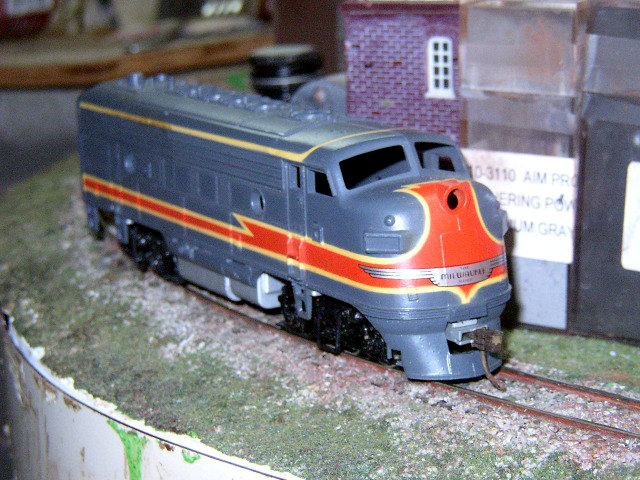 Good Morning! from Tipton IN.

kbkchooch said:
Well guys, I did it. Lone Wolf once again. After 19 years, I am no longer a member of the FCSME.

Well I googled the four county society of model engineers in central maryland....and they have a nice website.....which I'm not finished looking at yet. Good luck in your new ventures and with your own layout!

We are currently sitting at 55F going for a high of 86F in the sun...of course the humidity will make it feel like it is 94F out here...

Got some IV things to do today then it is off until 2 weeks from now to see how the treatments took....

So, after the treatments I am going to my FLHS to see about picking up some more paint and such....

My old 2006 HP latop computer has been really super slow on the internet for a long time.......until a few minutes ago. I used a free program called a TCP optimizer (TCP = transport control protocol). In a few seconds it more than doubled my download speed from 5 mbps to 12.5 mbps. It increased my upload speed only about 10%. But the internet feels a hundred times faster than before.....and things don't freeze up now. What a miracle!

I'm not sure if I'm smart for figuring this out.......or an idiot for taking this long? This here MRF site is still pretty slow sometimes......most others are ripping fast now! The youtube videos run so much better.

Good morning. It's 73° with a high chance of showers and thunderstorms. A flash flood watch is in effect. Locally heavy rainfall is possible. The high will be 82°.

Think I'll stay home today what with the weather being what it is. It's looking like rain through to Wednesday. The grass is growing like there's no tomorrow and I can't cut it with all this rain.

I had a lot of fun yesterday speed matching the Dash 8-40B to run with two locos that have Bachmann decoders (Bachmann GP38-2 and Atlas SD27J). The Dash 8-40B has a Digitrax decoder. Compared to those two it took off at warp one! They'd keep up with it at higher speeds but at low speed it was a speed demon. I had to make minor changes in the mid and high speed settings (CV6 & CV5) but the low speed (CV2) had to be set all the way down to one. It's normally twenty-six.

On the agenda today is more layout cleanup. It's already a mess from working on the new arrivals. 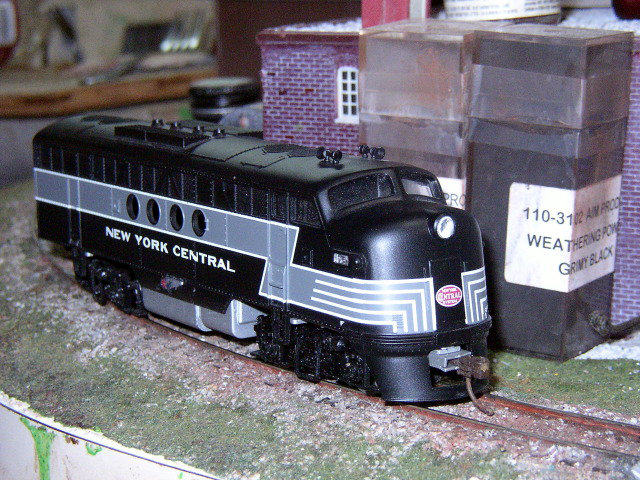 Weather radar shows a bunch of nasty stuff coming so I'm going to shut down for a while.

However I couldn't go without showing what I did with the two NYC FT shells I got recently. 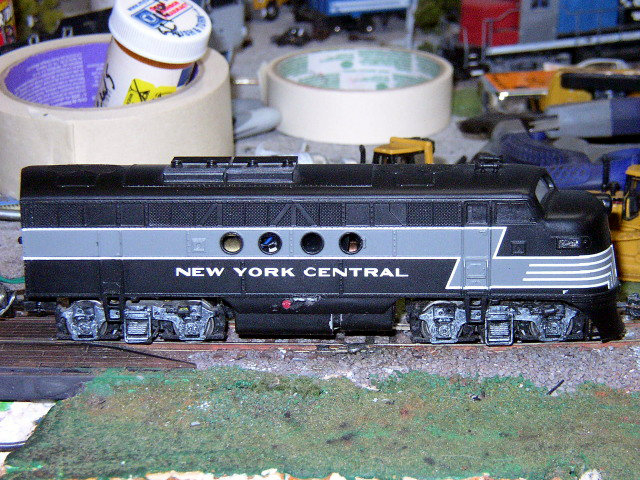 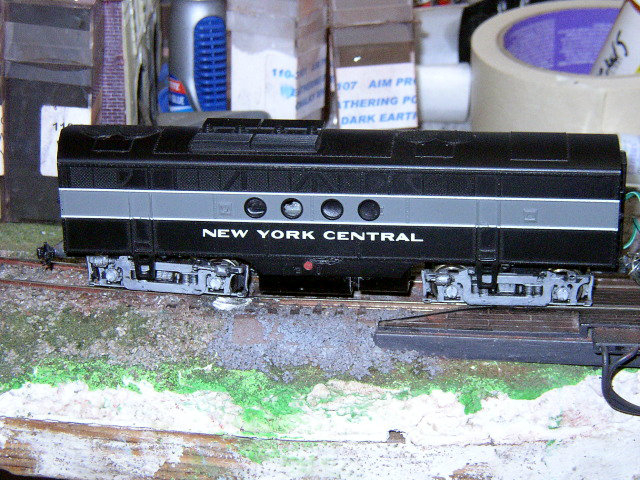 The FT-A shell is on an Athearn clone frame from I don't remember which company. The FT-B shell is on a cut down Stewart frame with Proto trucks.

Jeffrey, send some, well quite a bit , of that rain up this way, PLEASE! The area where I live is extremely dry! We've had about an inch of rain in the last two and a half months. The corn is going to be a total loss for some of the farmers. The ones who got their corn planted very early are doing better than the late planters, but not by a whole lot.

If you go 20 miles north of here the corn looks pretty decent, but they have had at least 4 inches of rain that we haven't. The last rain that we got was a 10 inch rain...............a rain drop every 10 inches. This is starting to remind me of living in Mesa, AZ. The yearly rainfall is starting to look like it might be about the same.

Is everything okay with Larry? No Thought Of The Day?

Is everything okay with Larry? No Thought Of The Day?
Click to expand...

This is the first time in the seven months I've been here that he's missed posting. Hope he's OK.

I see Larry has made his regular posts now. His mind must have went blank on him!


This is the first time in the seven months I've been here that he's missed posting. Hope he's OK.
Click to expand...

Burlington Bob said:
I see Larry has made his regular posts now. His mind must have went blank on him!
Click to expand...

Speak of the devil and he shows up. Folks were starting to wonder about you Larry.

Had to do some work on the FT B unit today. The wire for the right rail pickup on the rear truck had broken loose and I had to solder it back in place. That was easier said than done. It has a cut down Stewart frame, Proto trucks, a PPW motor. It also has an Athearn F unit super weight glued to the frame (with epoxy) and that partially covers the rear truck. Add to it that the units Bachmann decoder is on the underside of the super weight that's right over the rear truck. That left just a hair over half an inch to get the needle nosed pliers holding the wire and the soldering tools tip in there and kinda be able to see what I was doing. I got it done on the first try and put the shell back on. Note for the future: When mounting an Athearn super weight onto a foreign frame don't glue it. Find some other method to secure it. I had first thought of drilling a couple of holes up through the frame into the weight and putting in screws. I ruled it out as being too much work. Oh, such short-sightedness. It's gonna be interesting if I ever have to replace the motor.

Time to call it a night. While looking in the box the Dash 8-40B came in I found a snow plow. Upon close examination it appeared it would have to be glued to the front of the loco. That didn't appeal to me. I tried it on my Bachmann GP38-2 and what do you know. It snapped right on. So that's where it will be. See y'all tomorrow. 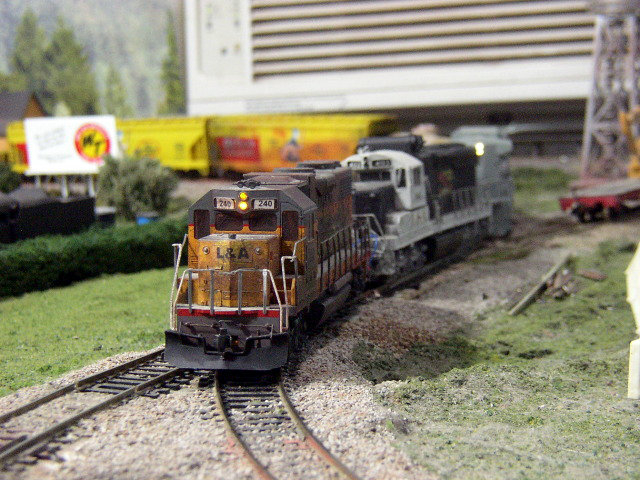 railfan said:
Yeah David, it's mostly an idea I have for the future. Not really needed....but kind of like mount everest......many do it because "IT'S THERE". Ha ha!
Click to expand...

The only thing I might bring up is, if the helper really isn't needed isn't it going to look out of place? I'm not sure if you have any grades on your layout, or even a very long consist your trying to pull, but if you do then it would certainly look a lot more realistic.

railfan said:
Was just watching the news.......an enormous train explosion in columbus, ohio at 2am this morning......50 miles south of here. Something about an alcohol filled tank car derailed. !! >> boom << !!

What I find rather curious is that to the best of my understanding as well as use of Denatured Alcohol as a fuel for a backpacking stove, it won't explode like gasoline does but it can be ignited with a flame but I'm not sure if a spark would actually ignite it or not? Mabye if was of a real high proof # but I still don't think it will explode?

This is the second train wreck within about a week as Oklahoma had a very bad passenger train wreck recently. I wonder if they ever determined what caused the engineer to run through warning signals without being alerted??

Also I found it strange that it should be a passenger train that was involved rather than a freight. Almost as if it was an act of terrorism?

Good Morning! from Tipton IN.

I'm awake as I have the last session to do today...they were going to finish it off yesterday but they ended up flushing out my Picline instead and replaced the dang thing ...with one under my collarbone........oh...btw...the lovely thing gets to stay in me for the next few weeks so they can draw blood from me.........I'll give them some blood...

So...maybe after the event I'll be going to my favorite park and watch some trains....out in the sunshine......

Good morning. It's 71°, wet and load here. The high will be 81° and there's a major chance of showers and thunderstorms.

Even as I type this there's a large thunderstorm bearing down on us, so I'll be shutting down just as soon as this is posted.

No plans for today. I hope to be able to get my meds refilled today. Checked yesterday and no action had been taken by the docs office. Tried calling them and nobody ever picked up so I have to assume they were closed. I'm hoping they're open today so this can be resolved. I really need those meds.

Things are getting bad here now. Rain is falling fast and heavy and the satellite dish is blacked out. Looks like 5am out there. 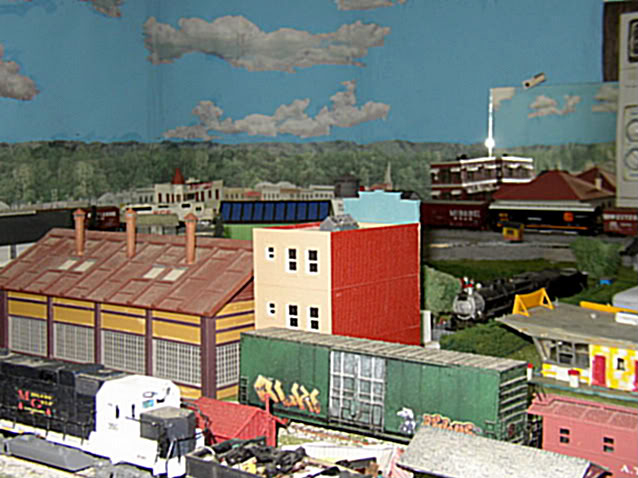 Stay strong Barry! Lot's of folks here are praying for you.