Staff member
This is the new place.
Any remarks about Ukraine or Russia will be summarily dealt with.

Thought we could put this big picture on that fresh painted wall, so folks could be reminded about trains while enjoying coffee with friends. 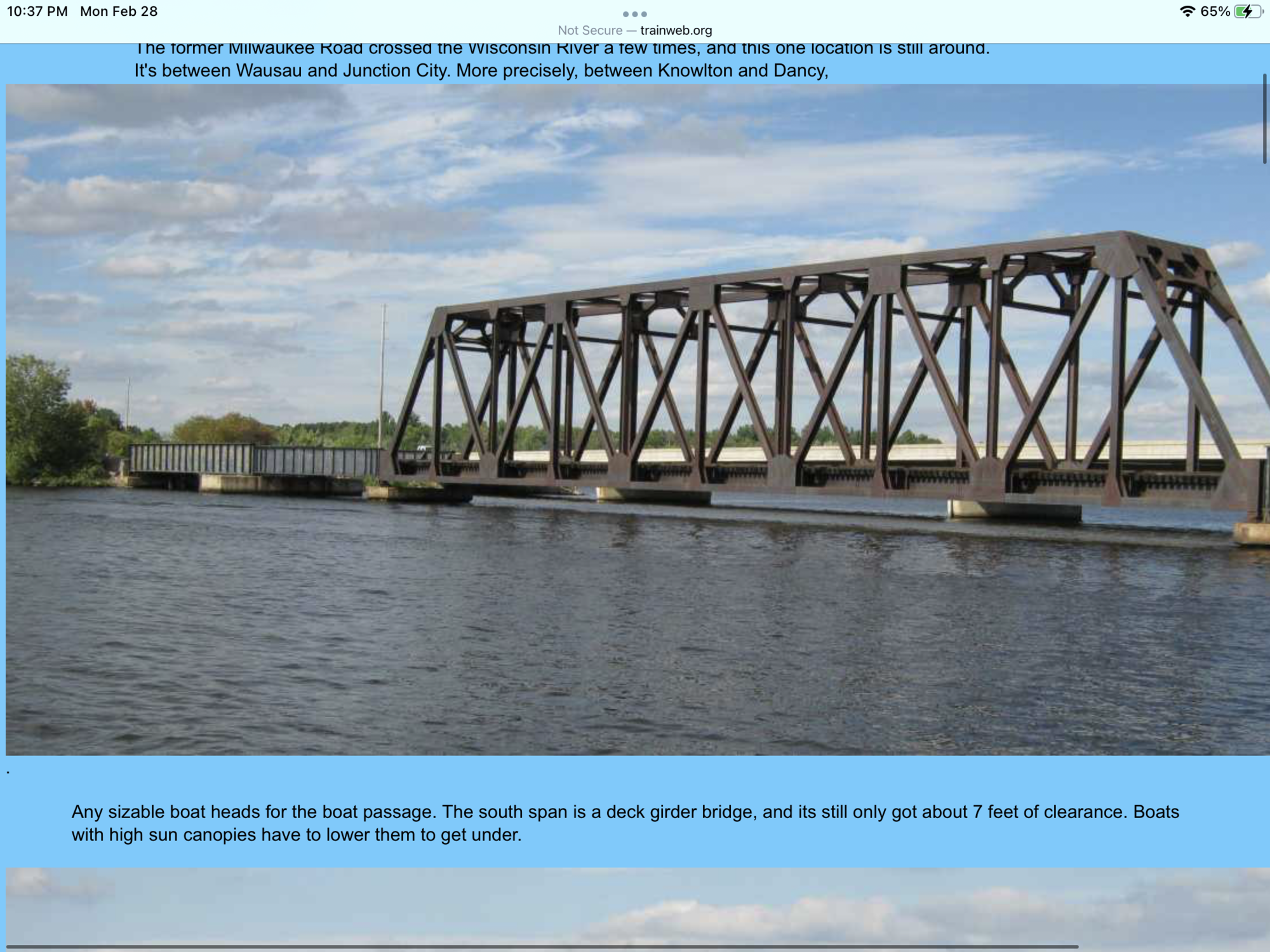 Got you Guy. These are the current bridges on Lake DuBay in Knowlton, Wi. Our house was 1/2 mile past the other side of the bridge. I bet I went under this bridge a 1000 times boating from 74 to 2014. CrossEd the bridges many more times then that. The numbers would be combined for the old single lane bridge and this newer one. Picture is from Ken Oldenfeld, I messed up the name sorry!

My pictures were lost in the move of 2014

Here are a few of my N scale Japanese trains. The first is half the KATO Twilight Mizukaze resort train of JR West. I forget the second but it has a Gudetama livery and actually belongs to daughter and is from Tomytec. They are actually unmotorized models but they sell motor chassis and upgrade parts to turn them into running trains, which I have installed. The next two are NB-E300 trains that serve resort areas. These are diesel hybrid trains. The next is from Kyushu and I forget the model number. This last three are all from MicroAce. The next is part of the KATO E001 cruise train (you book the train like you would a cruise ship). It runs under the name “Train Suite Shiki-shima”. The last is my GreenMax JR 103 Hanwa line. 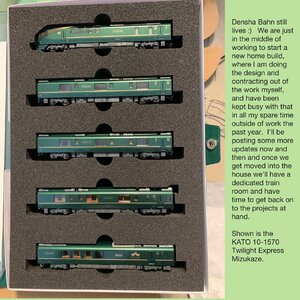 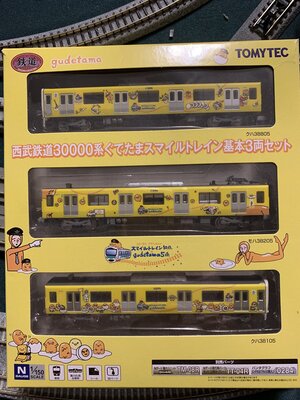 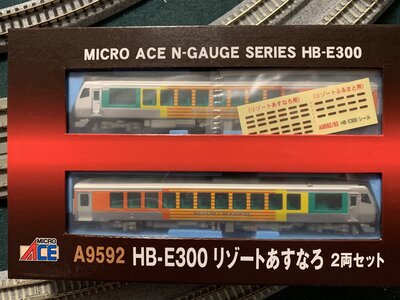 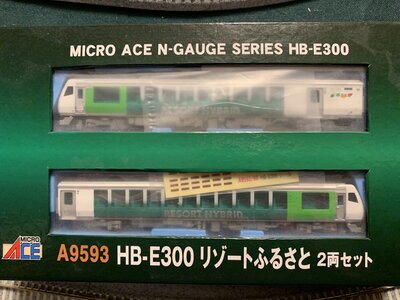 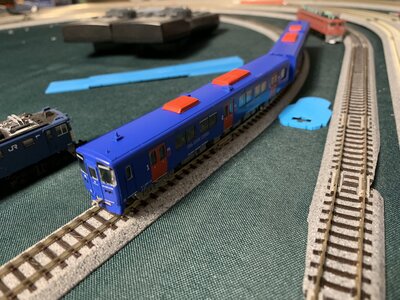 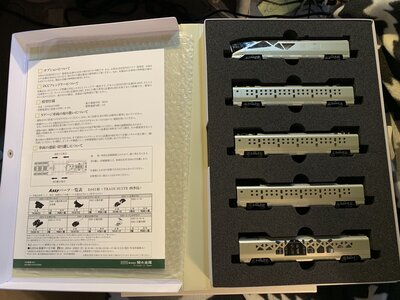 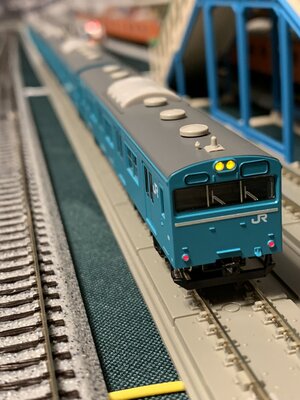 March 1st already! The older I get the faster time seems to go by.

Can't stay long today. Today I'm driving 1.5 hours to pick up the mother unit. Then drive her down to Indianapolis 3.5 hours away.

You might recall she's a liver transplant recipient. Been 25 years.

I've got one cup of coffee to enjoy, then I hit the road.

Timing-wise, I might be able to reward myself with a pizza from Volcano in Elkhart IN. We'll be driving by there on the way back to drop Mom off at her apt.

Bruette said:
March 1st already! The older I get the faster time seems to go by
Click to expand...

Tell a 15 year old that by the time he/she gets old they could live to over 100 years easily and say the same to someone topping 80+, sort of has a time compressing effect, especially when they realize that that is not likely for them. After the age of 20-25 is when the second stage booster seems to kick in.

Good morning....Fresh coffee fresh paint. Flo I'll have a cup of the coffee.

Hmmmm, opening the March coffee shop in late Feb.
Sorta like the Model train magazine. The April issue is already out.

Coffee break.
So....when a Union Pacific rep sneaks out to check on Southern Pacific premises pre merger time and got caught by "your friendly Railroad" employees...they know how to deal with the guy.

Note: No preiser figures were harmed during the scene. 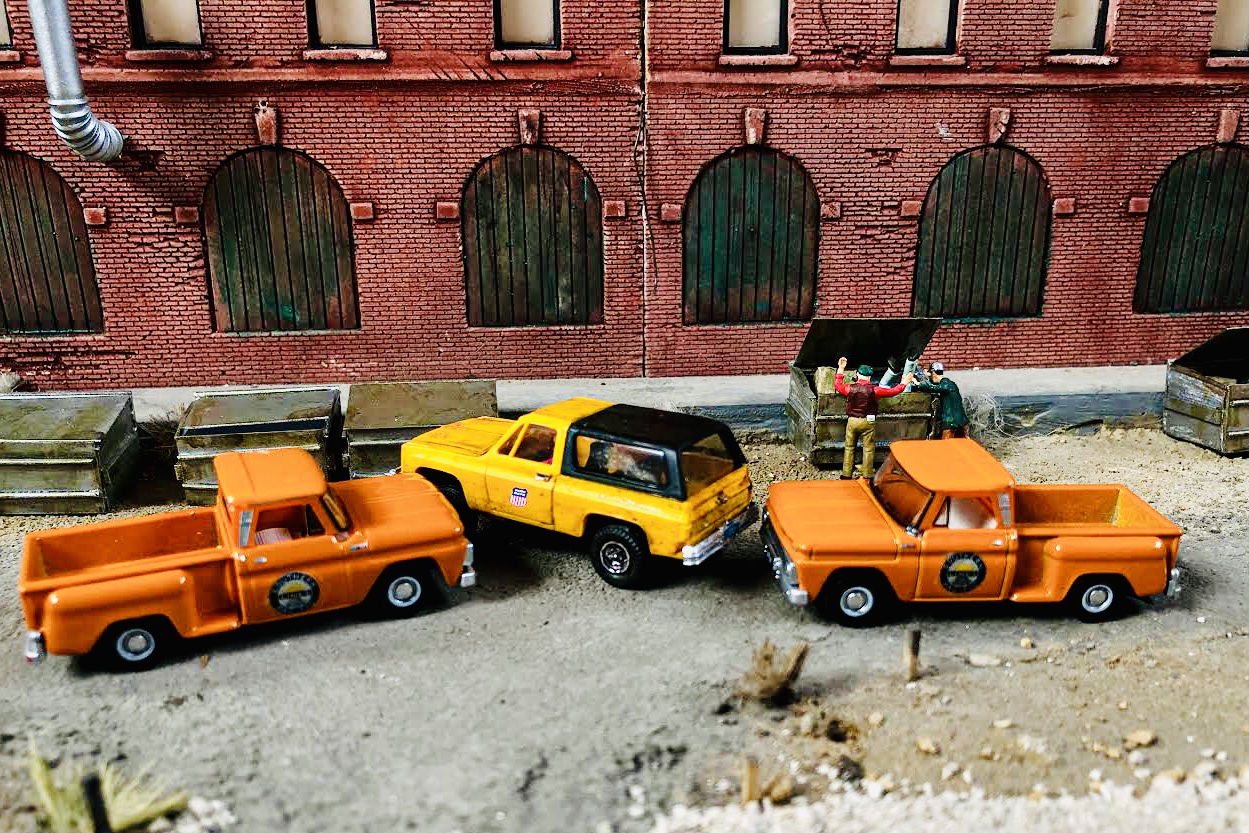 Liberation day here in Virginia. Face diapers aren't required in school anymore. Those who feel the masks are doing something for them can still wear em if they want but there's no guarantee the other kids won't mock them. In the meantime, my chain link fence is still keeping the mosquitos away. Haven't seen any for the past four months now.

Fresh coffee and fresh paint, must be a new month! Remember to tip your waitresses, and once you do please stand them back up!!

Good Morning All. Clear and 39°, headed up to the mid-70's later on. Happy Fat Tuesday, traditionally known as Mardi Gras, to all our Cajun friends out there. My family lived in New Orleans from 1959-1961, and things were not as raucous back then.

Yesterday afternoon I noticed some water under the house. leak from a pipe. Plumber coming around daybreak this morning. I guess that I will have to put on a pair of pants.

I went in a different direction yesterday out in the train shed. As you know, I like to build structures so I started another one. This is a City Classics model called East Ohio Street Building. 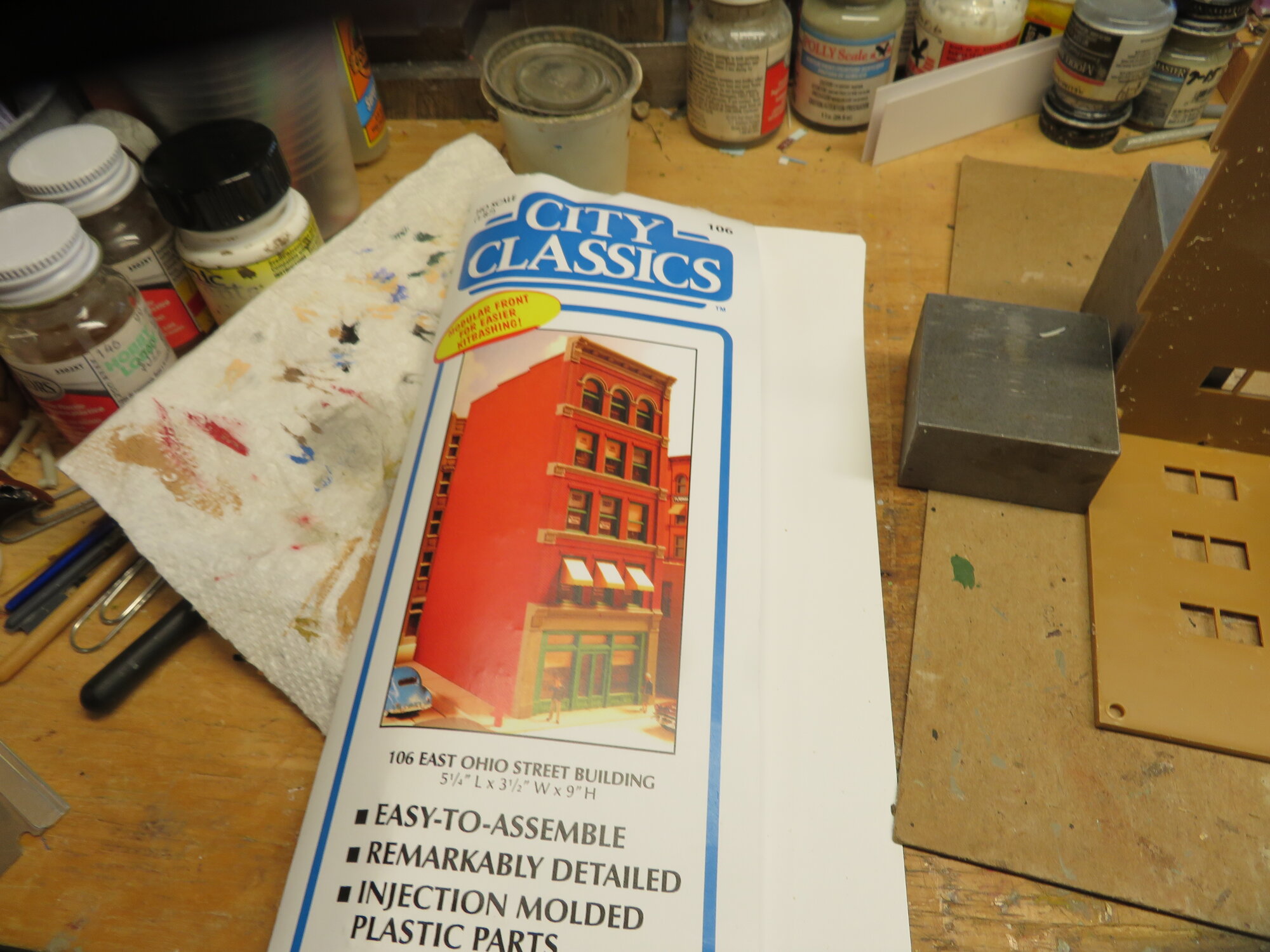 It's kind of straightforward, but in order to make it expandable with multiple kits, the front wall is in two pieces. 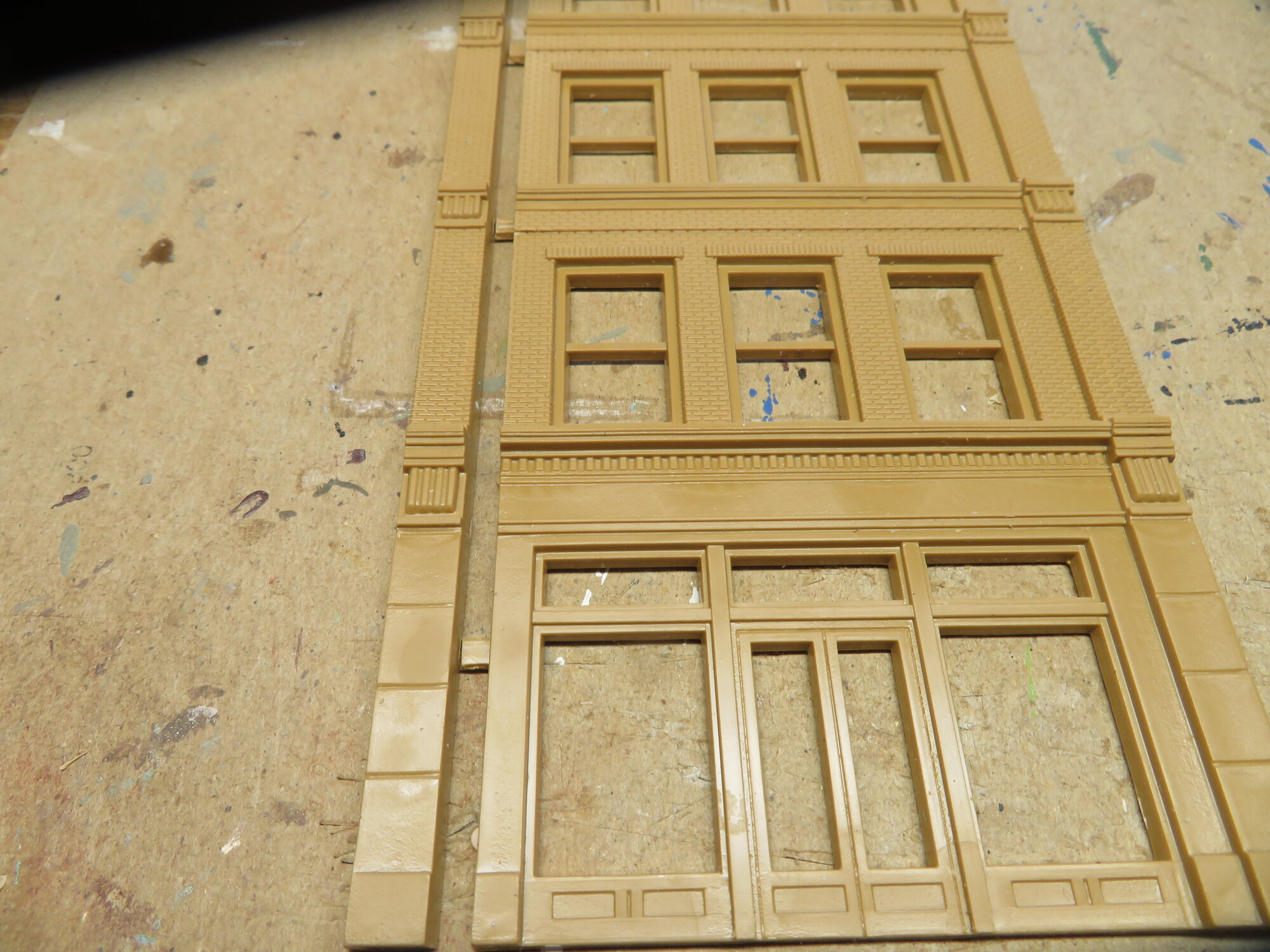 Lots of trimming is also required as these mold release marks are everywhere, in gluing surfaces no less. 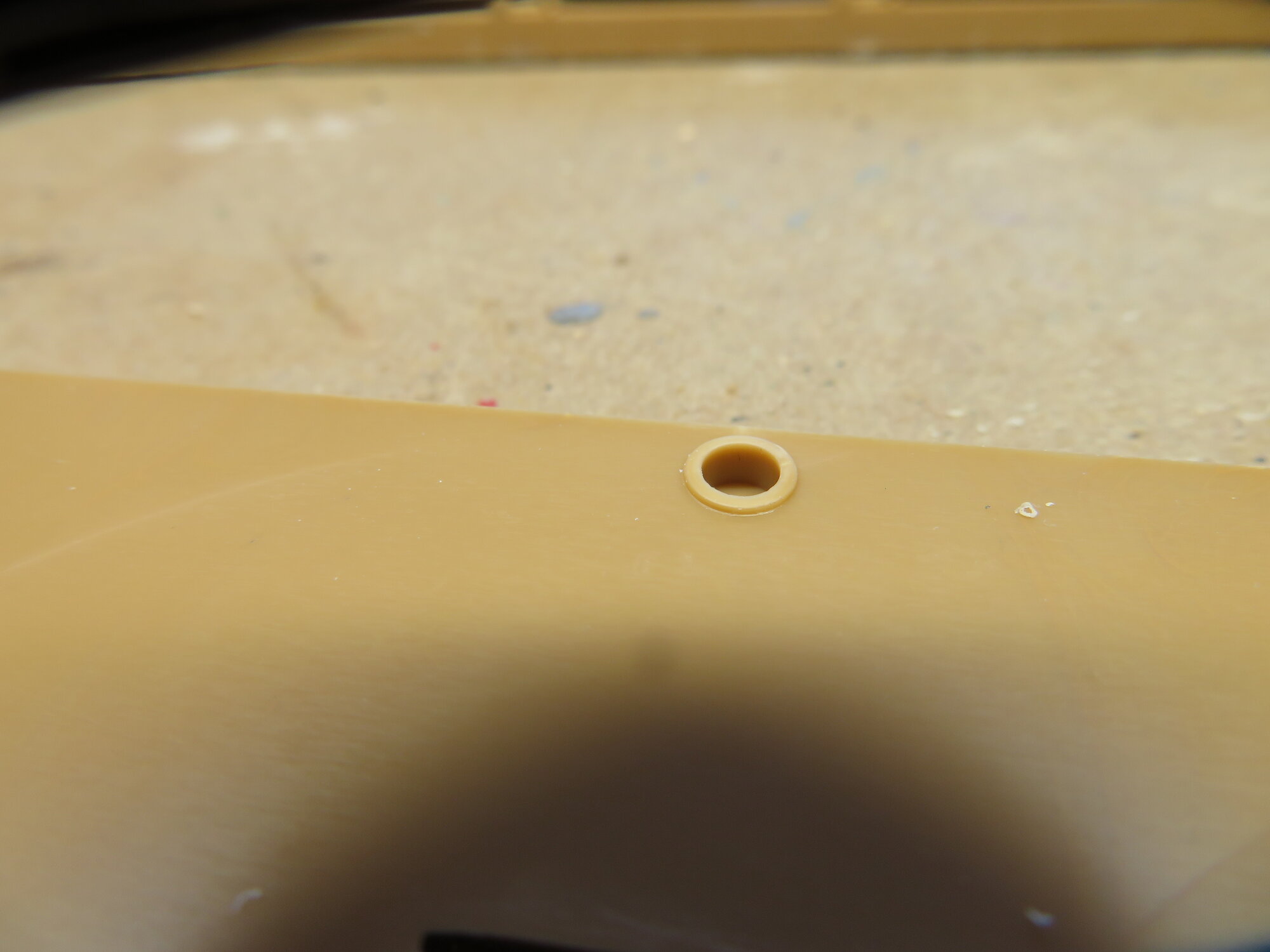 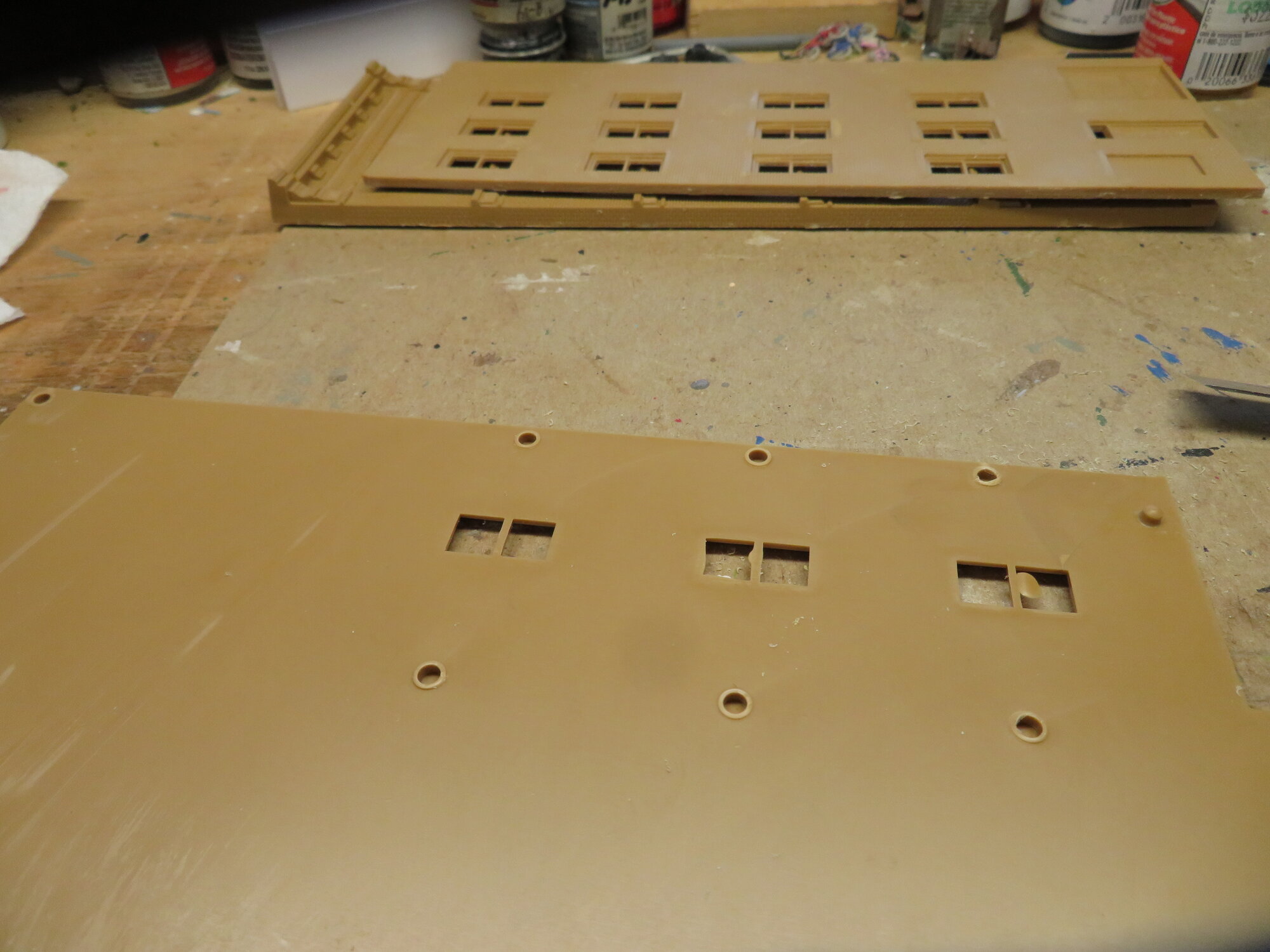 Got out the "big" Exacto for this job. 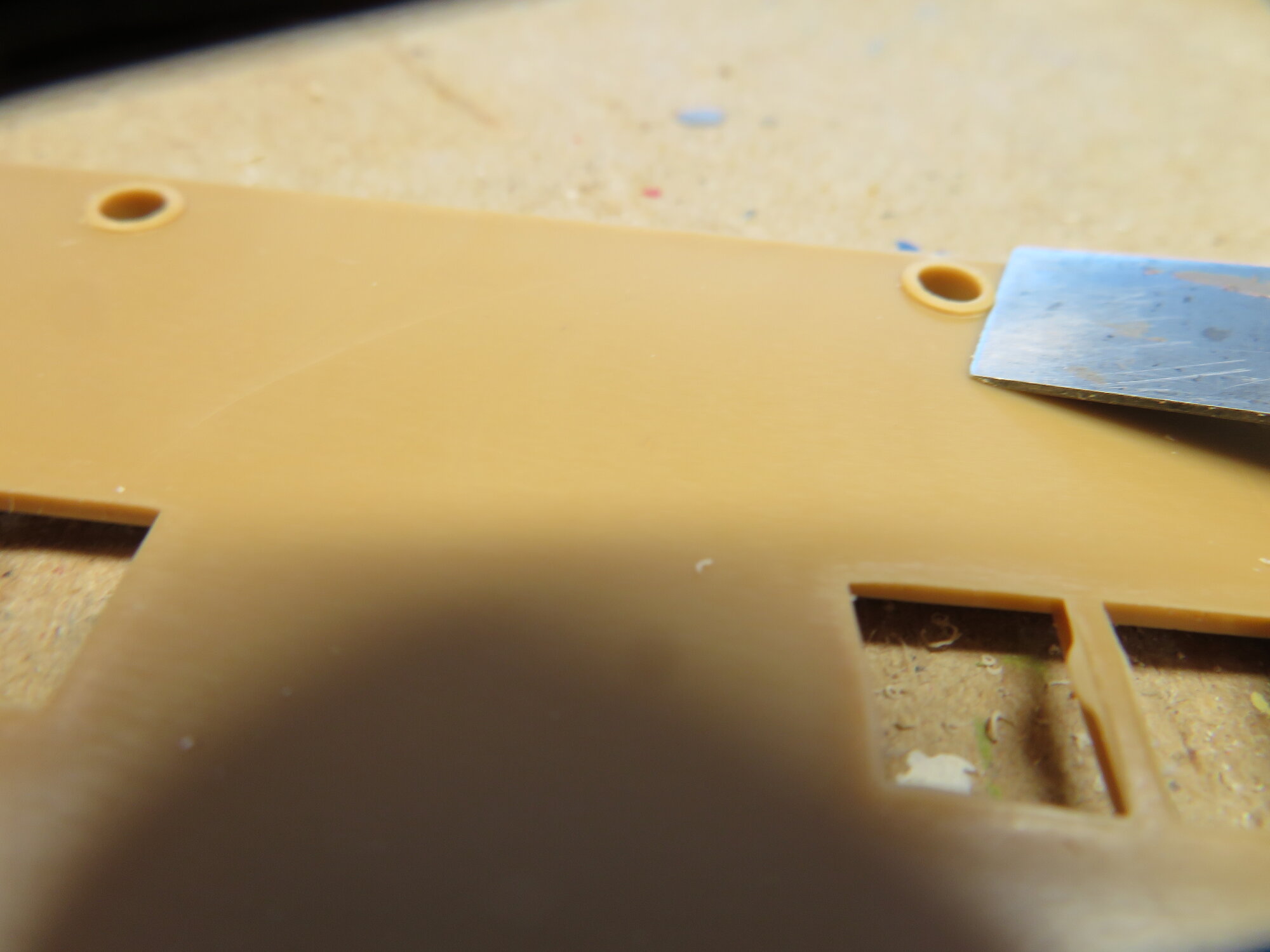 Gluing was rather routine. 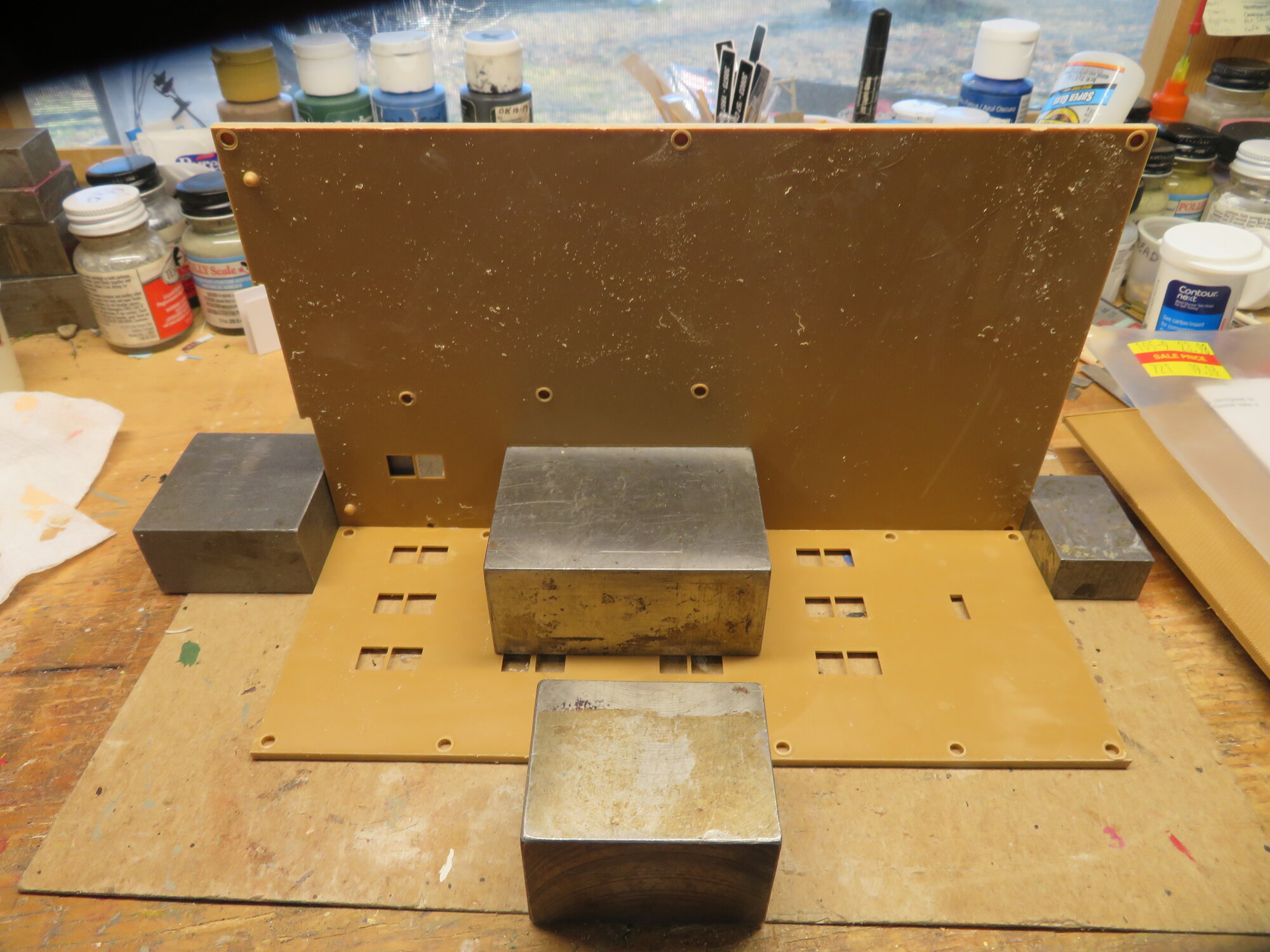 Progress so far after lots of trimming. 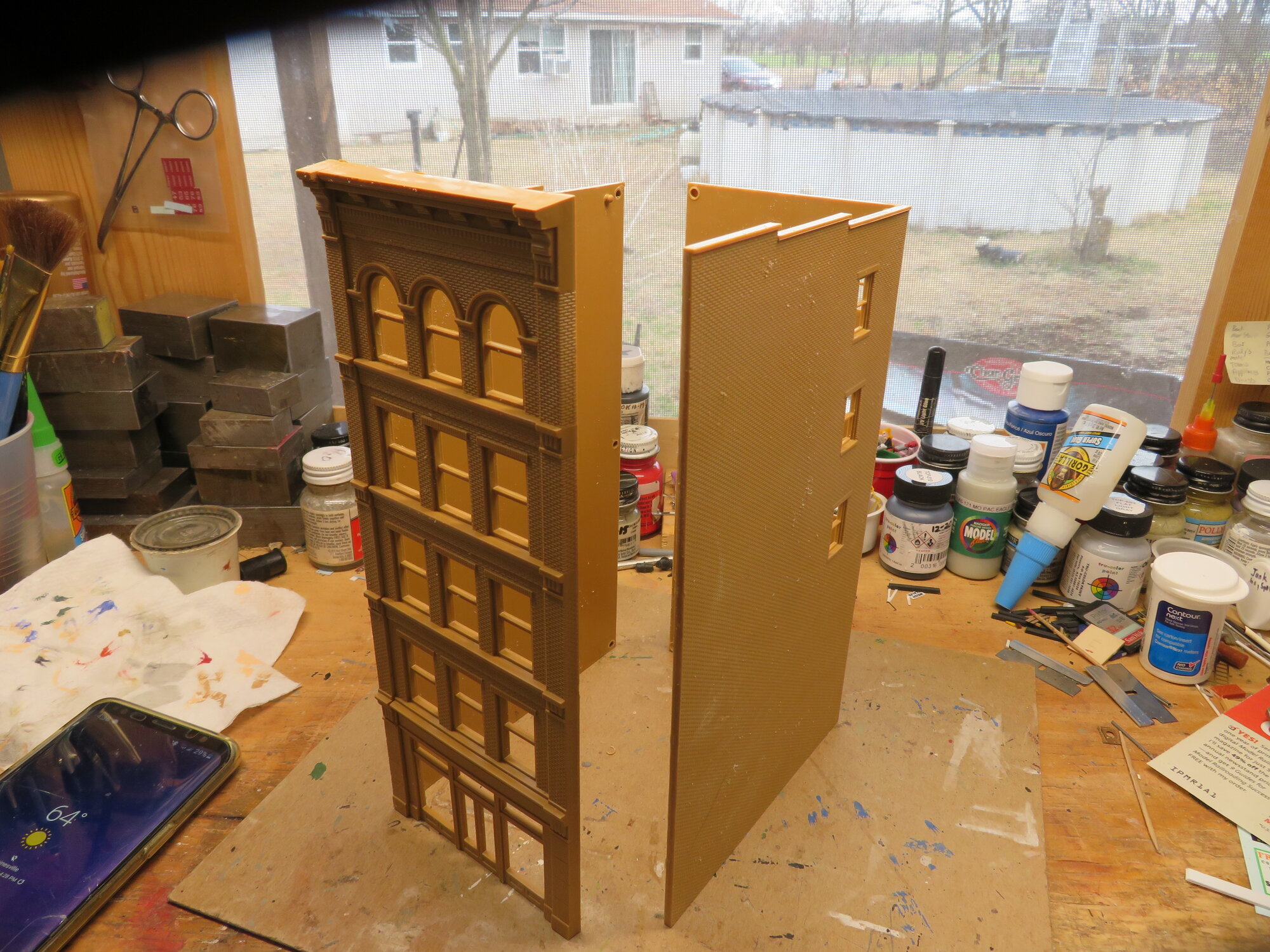 Window painting is next.

Terry - I don't know whether to offer congratulations or condolences on your sudden promotion. I've seen it go both ways in my 43 years with my company. It always went well for me personally, but the Peter Principle got to some others. Best cure for stress as I learned and practiced, was to leave it there as soon as you leave the parking lot.
Tom O - I agree and disagree with your post #1621 regarding posting about the foreign conflict. While I chose to not post anything, this is after all the Coffee Shop. But, like the current media, nothing new was added here; we were wasting electrons and it was getting boring. Sorry if I offended anyone.
Greg - That's too bad about the old motel. The party sounded good though.
Tom - I have to kick myself whenever I see your scrap loads. We had a machine shop at work that generated hundreds of pounds of those shavings a month and I never thought to get any.

Everybody have a good day. Support your local stock broker, I need another good day like last Friday.

Like what Mel has done to the new place!

In late as it was a busy first of the morning. Got to go to the bank later and lose my tax refund...<sniff, sniff>. Taxes filed electronically on Feb 14th, Refunds (state and federal) in my bank on the 23rd, and refund gone on March 1st. Nothing like making a big principal payment on the house to get rid of a tax refund quick. I would have spent on something less worthwhile otherwise (you know a vacation, a new bass boat, time snare, etc.

Gotta go read what I missed at the old site...BBL

I forgot earlier, if you live in Texas, it's primary day. Go vote!

Mild temps here in the upper midwest. May even get liquid precip today!

Took the weights off the loop and ran trains roundy-roundy! ! ! One curved TO is tending to derail, no time to investigate fully yet. I am a bit concerned that perhaps I put too much weight on it as the glue was drying and perhaps it is cock-eyed or something. We'll do in depth looksie-ing Thursday when wifeykins is in Denver.

Thanks for the lead on the BLI* site for keep-alives. I will check out the BLI site and see if I can make heads or tails of it. May try my hand at building a keep-alive ala Larry Puckett.

I must admit some hesitation to crack the shell open of a $200+ locomotive and tender. Are the BLIs pretty easy to get into? Good vid or instruction file out there? Now that I have the loop, I want to run that steamer and get it tweaked so that it runs reliably.