Boris said:
Tom: Agreed. I still have a Chris Chelios home sweater, from the 90s. Hope the hawks are not the next target of the politically correct crowd.
The Devils current home sweater is great, but the concept of a Pine Barrens monster is a tad preposterous. BTW: The state requires a semester long course on the Jersey Devil legend in all public schools for the fourth grade students...
Click to expand...

Bruette said:
Sherrel, are you watching the Orioles and Red Sox? The Orioles’ starting pitcher has an 87MPH fastball and 3 pitches (slider, change up and curve) 80MPH or below. The Red Sox have a 100MPH fireballer on the mound!

The Birds had 3 good at bats in the top of the first.

The Red Sox look confused with 2 Ks in the bottom of the first!

I hope this keeps up!

We finally get to watch our Boys of Summer tonight(blacked out last night- ESPN game). Kike’ had a great game & Graterol looked sick, with the 100+ heater.... & then his slider is essentially a changeup, in the high 80’s.
Last edited: Jul 24, 2020

Thanks, everybody, for likes and comments for my photos of Britsh Railway Museum. It was good to see the replica of the world's first steam locomotive.

Willie .... More great photos from you ! I especially like the Santa Fe red and silver paint scheme.

Joe .... I know that type of Baldwin was called "baby faced", but I don't know why. It does not resemble a baby in my opinion.

I'm running trains. ..... Here is a freight train with P2K GN Alcos I have owned for many years. 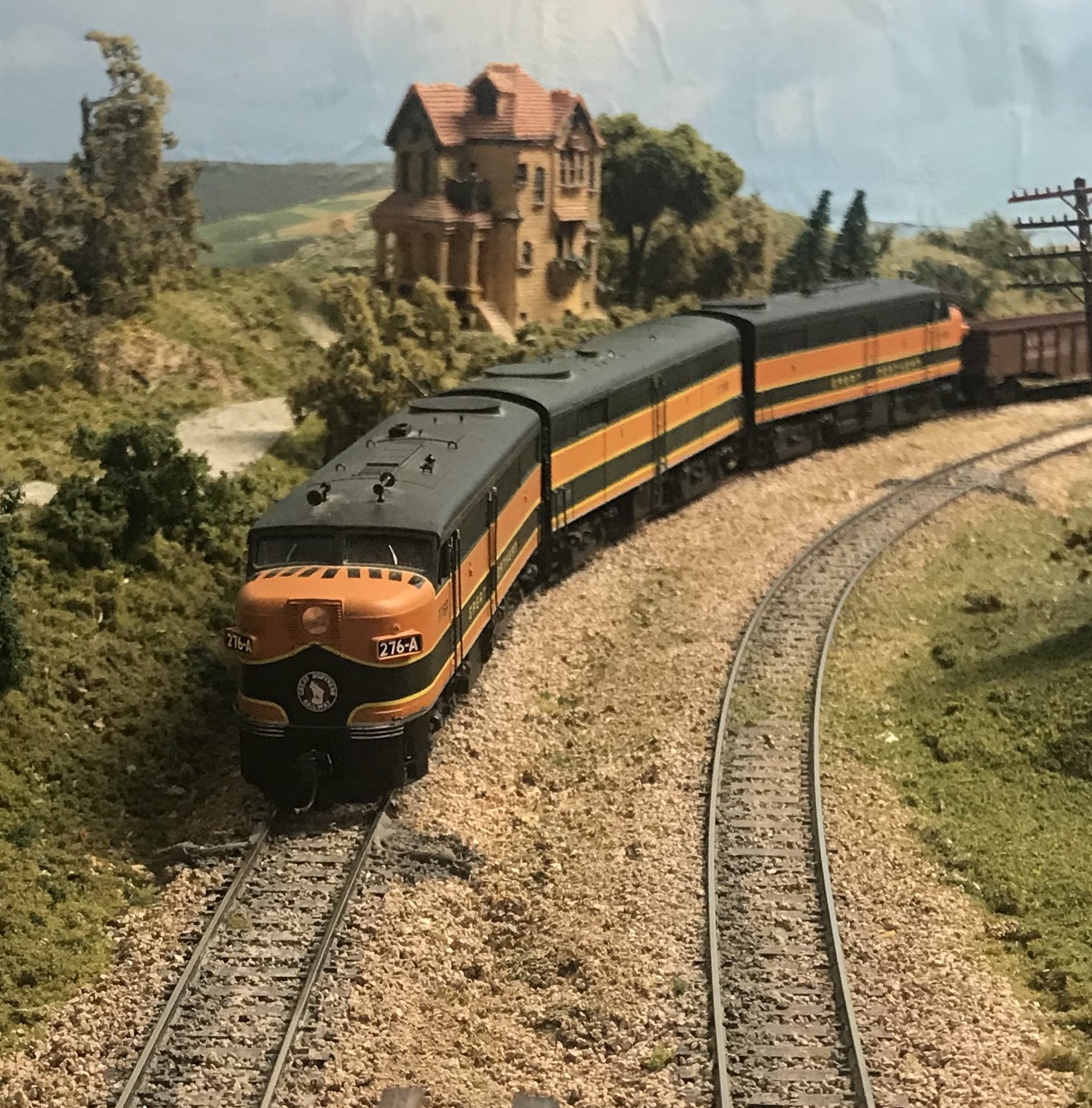 Garry: Nice shot and scene. Is the three or four story house I am steel structure to give perspective? 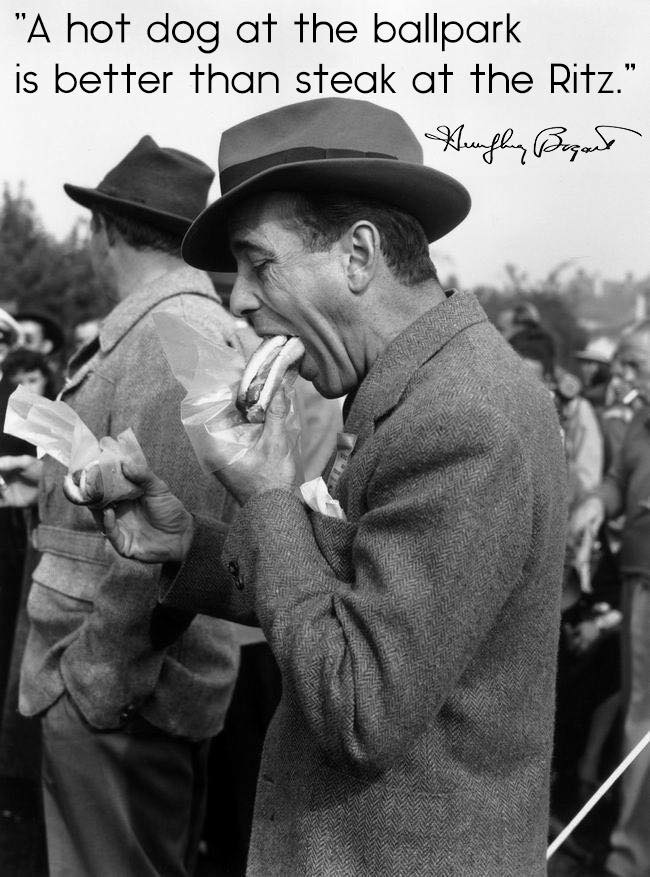 Bruette said:
Update: It has not.
Click to expand...

It has only gotten worse.

Thanks to all who commented and like my photo with GN Alco locomotives.


Trussrod said:
Garry: Nice shot and scene. Is the three or four story house I am steel structure to give perspective?
Click to expand...

David ... Thanks for commenting. I don’t understand the question. Would you like to rephrase it?

Everybody... Apparently, the players on pro sports teams are too political. Pro sports are now about politics. So, should we no longer talk about pro sports because politics is not allowed here ?

Garry, don't get me started about politics in sports and entertainment....

GarryCBQ said:
Everybody... Apparently, the players on pro sports teams are too political. Pro sports are now about politics. So, should we no longer talk about pro sports because politics is not allowed here ?
Click to expand...

Recently I have gone out of my way to avoid politics on this forum.

I have ignored both back handed political comments and out right political statements.

I have ignored all aspects of the current events infiltrating sports.

If sports are banned, I will soon be as well. 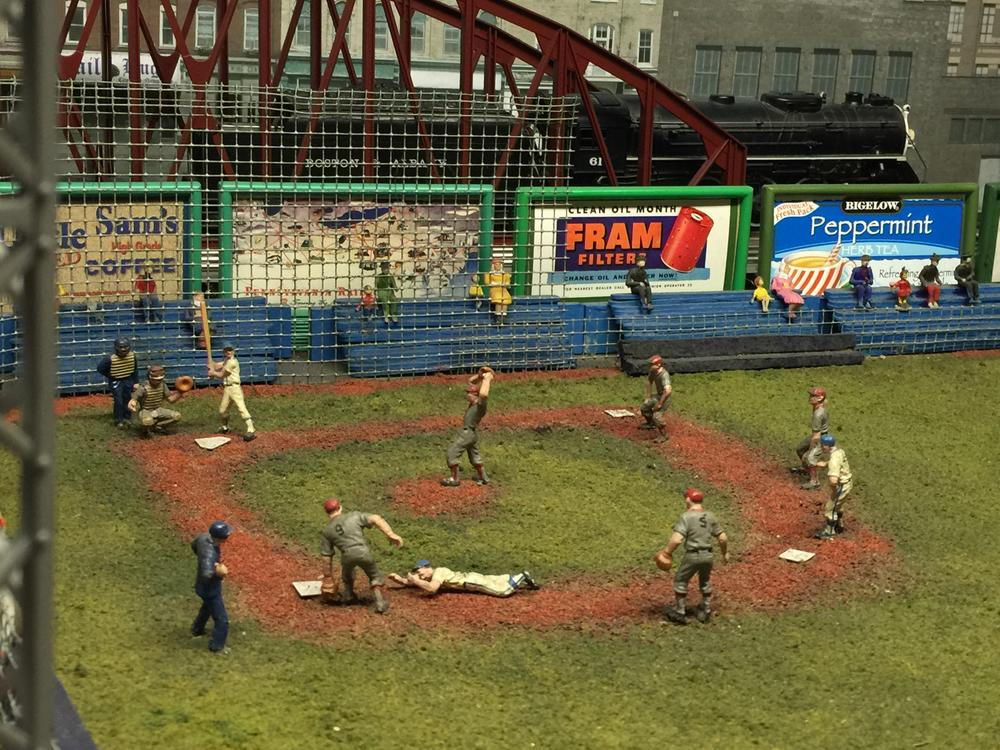 Good morning gang!
Just time for a quick bite of a breakfast burrito today. Powerwashing the house and installing nerf bars on the Colorado today, maybe mudflaps too if time allows, the a pool party next door tonight.
L8ter!

Good Morning All. Mostly clear and 75° on this beautiful Saturday morning. The ever changing weather forecast now has thunderstorms in for Tuesday through Friday. Maybe related to that tropical storm in South Texas, I don't know. Made it up to 95° yesterday, more mild temperatures for the next week though.
Received two grandkids yesterday afternoon for a few days. The third, a "mama's boy", did not want to come. First stop was the pool even though my granddaughter has an in-ground pool at home. Ours is more fun she says, and is actually bigger! I think that we are more permissive as well. When she stands on her toes, her mouth barely breaks the surface. She brought her goggles and spends most of her time underwater. I showed her how to shoot grandma with the water cannon, she liked that.

Keep rolling out those breakfast burritos Flo, I'll take a couple over here.

Got a special package yesterday from ScaleTrains. Pictures are a repeat of what I posted in the RPO thread yesterday. 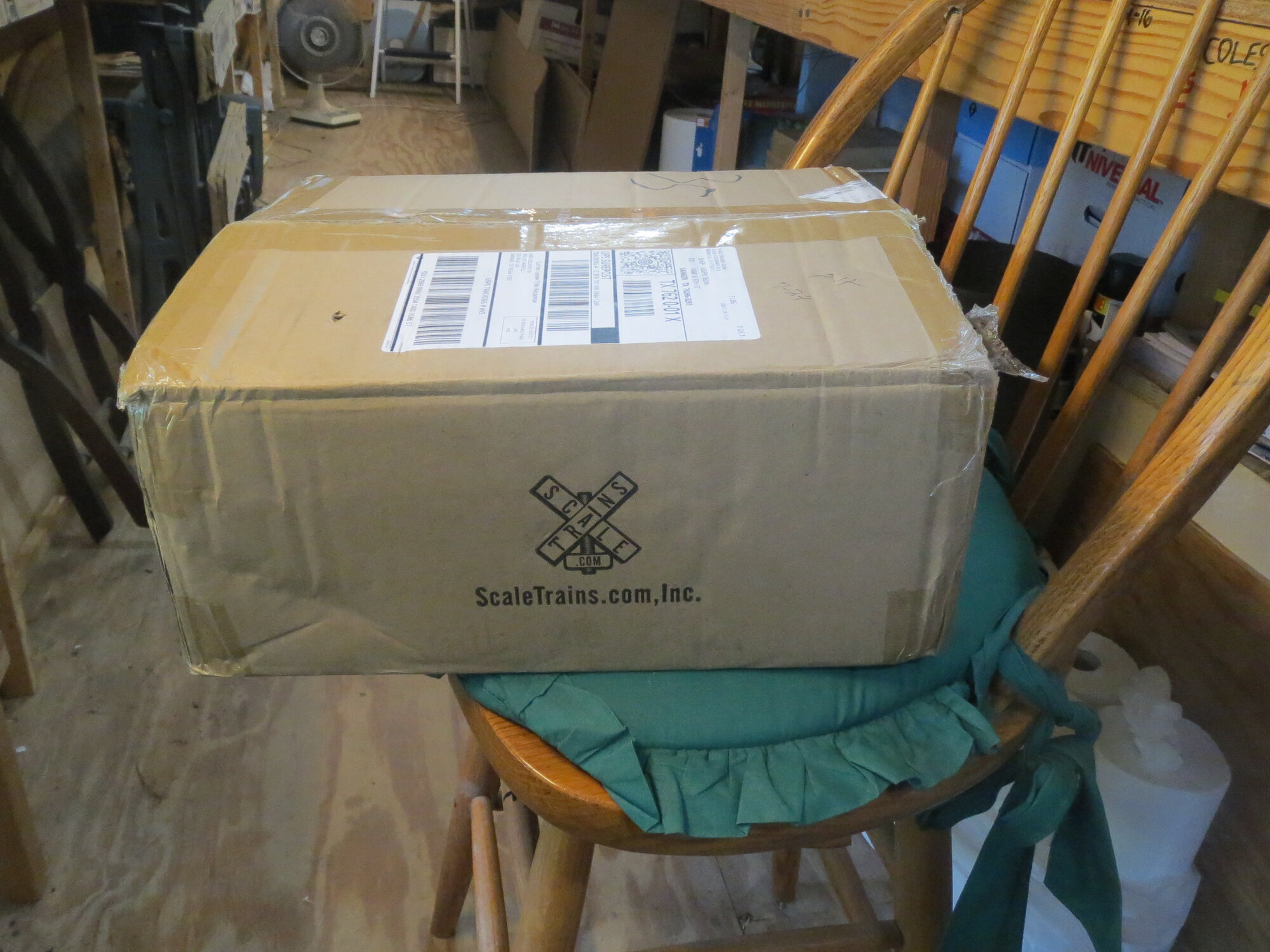 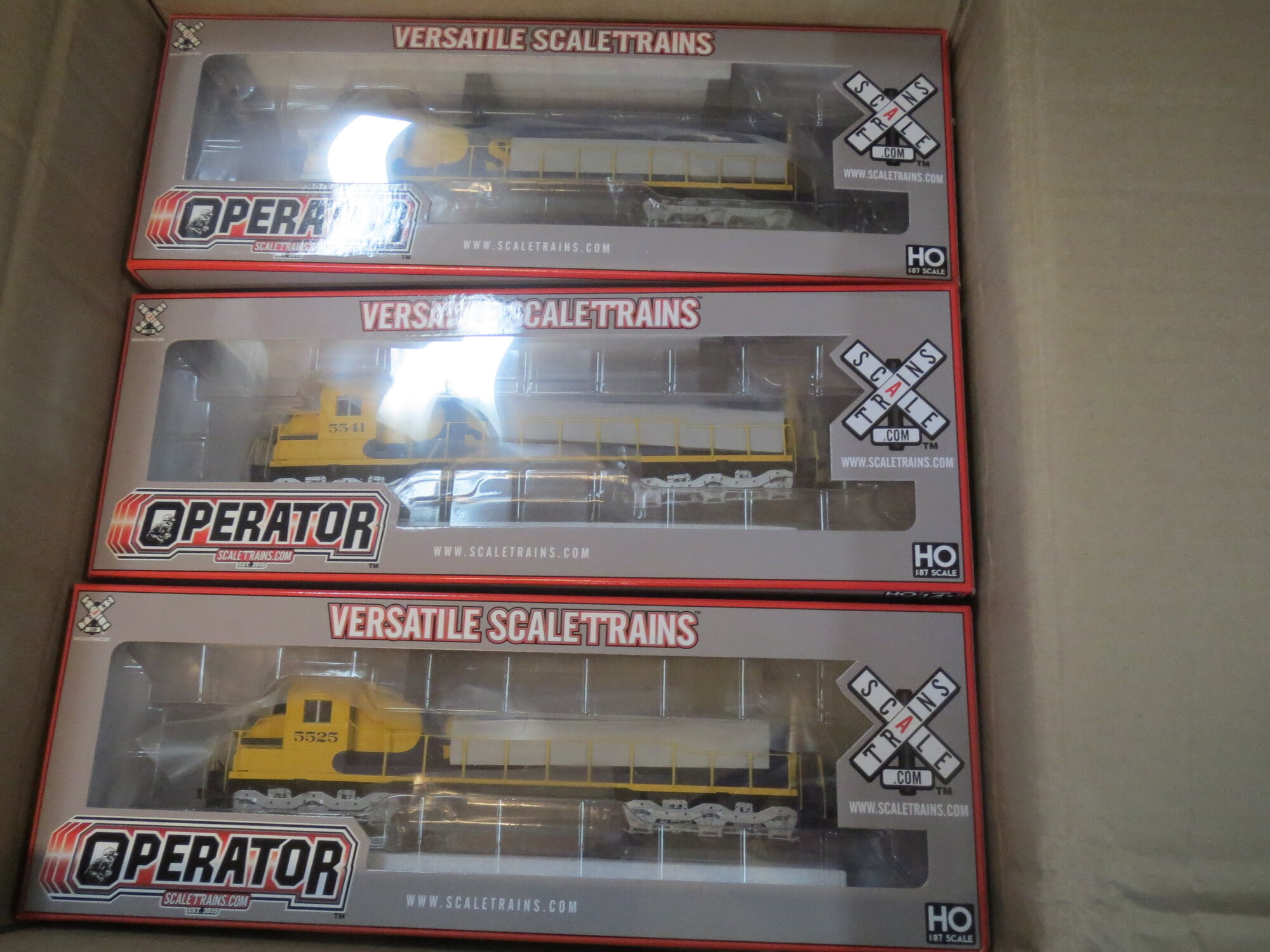 It was my three SD45's that I pre-ordered back in November. 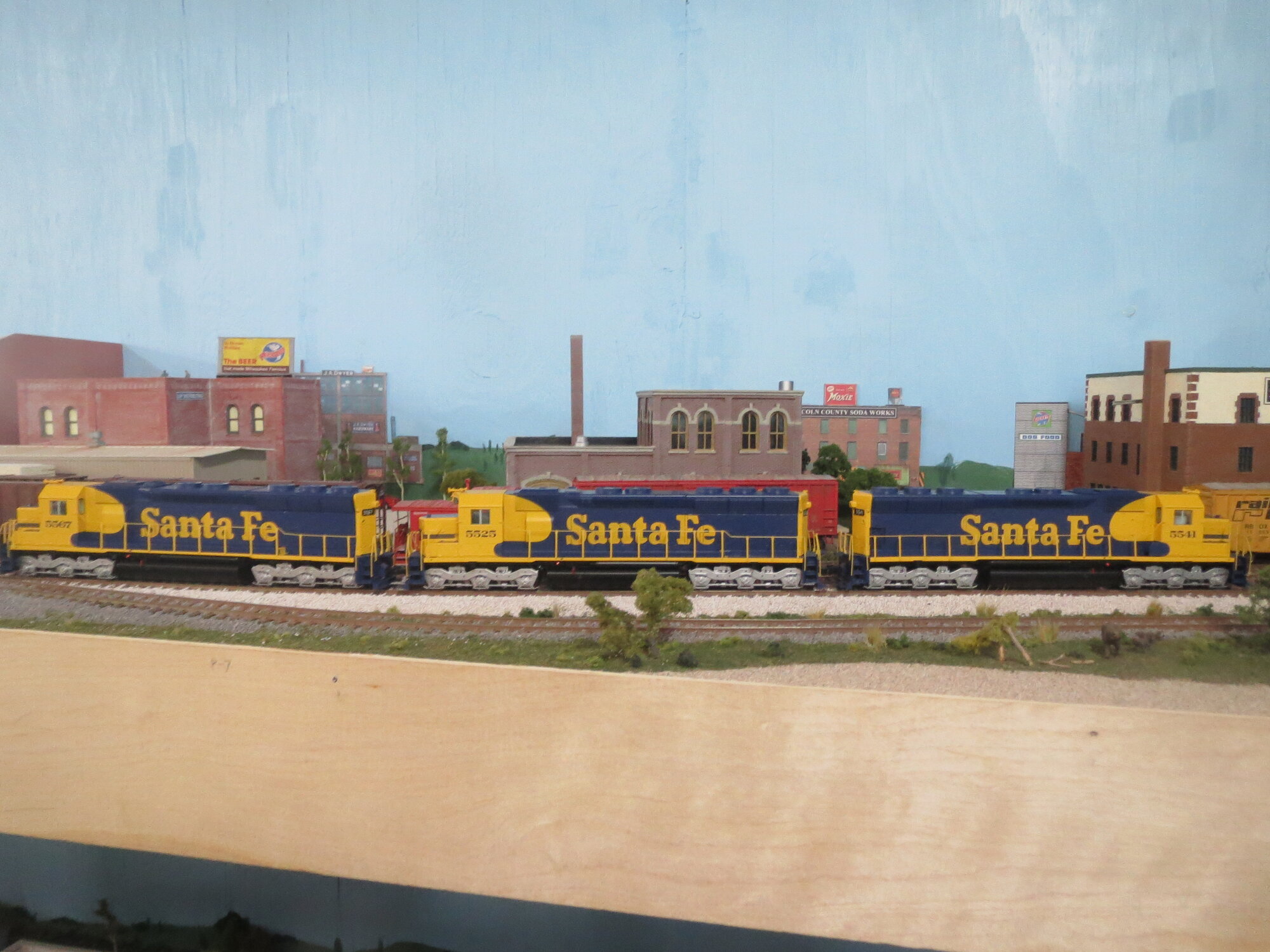 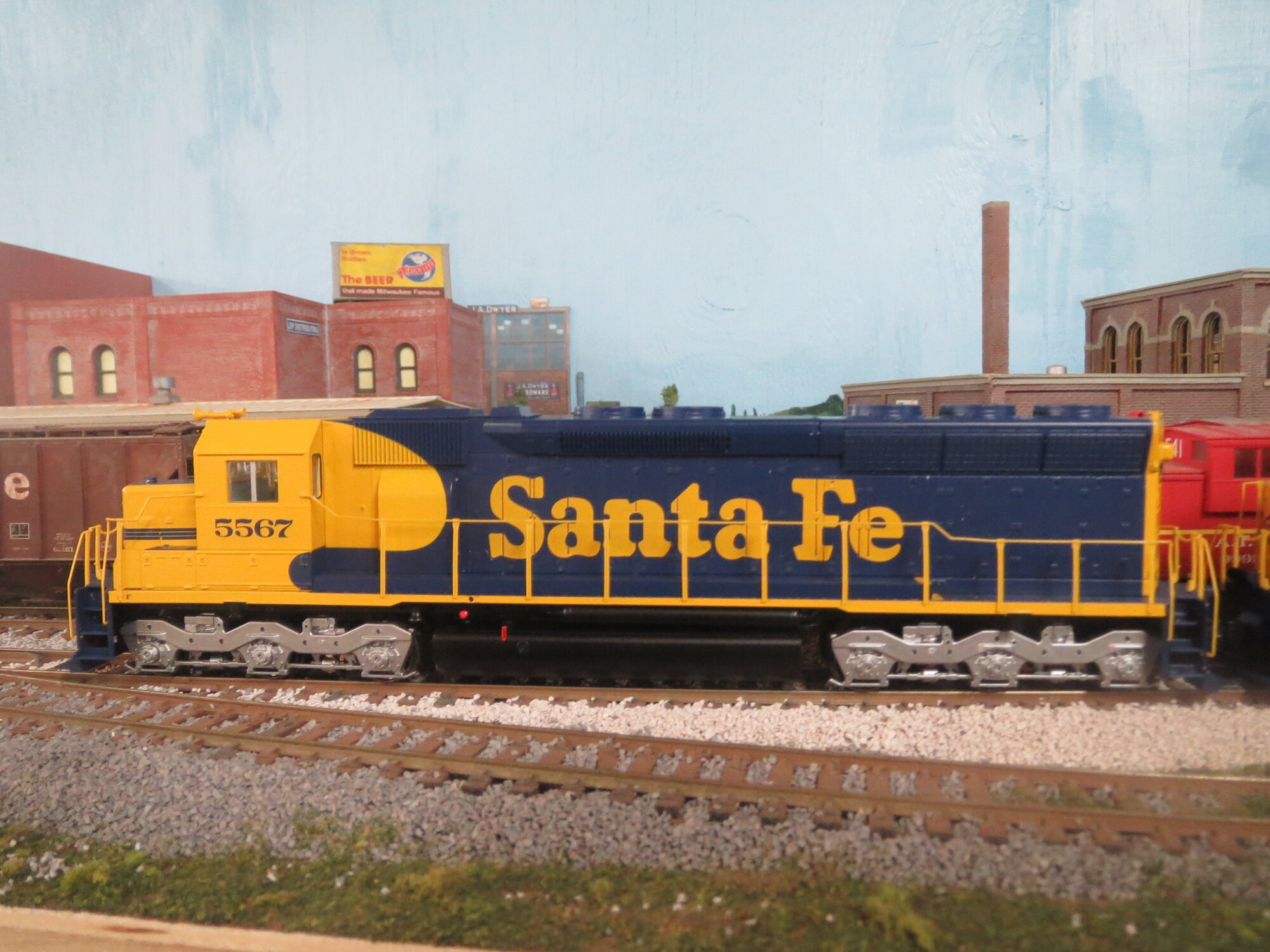 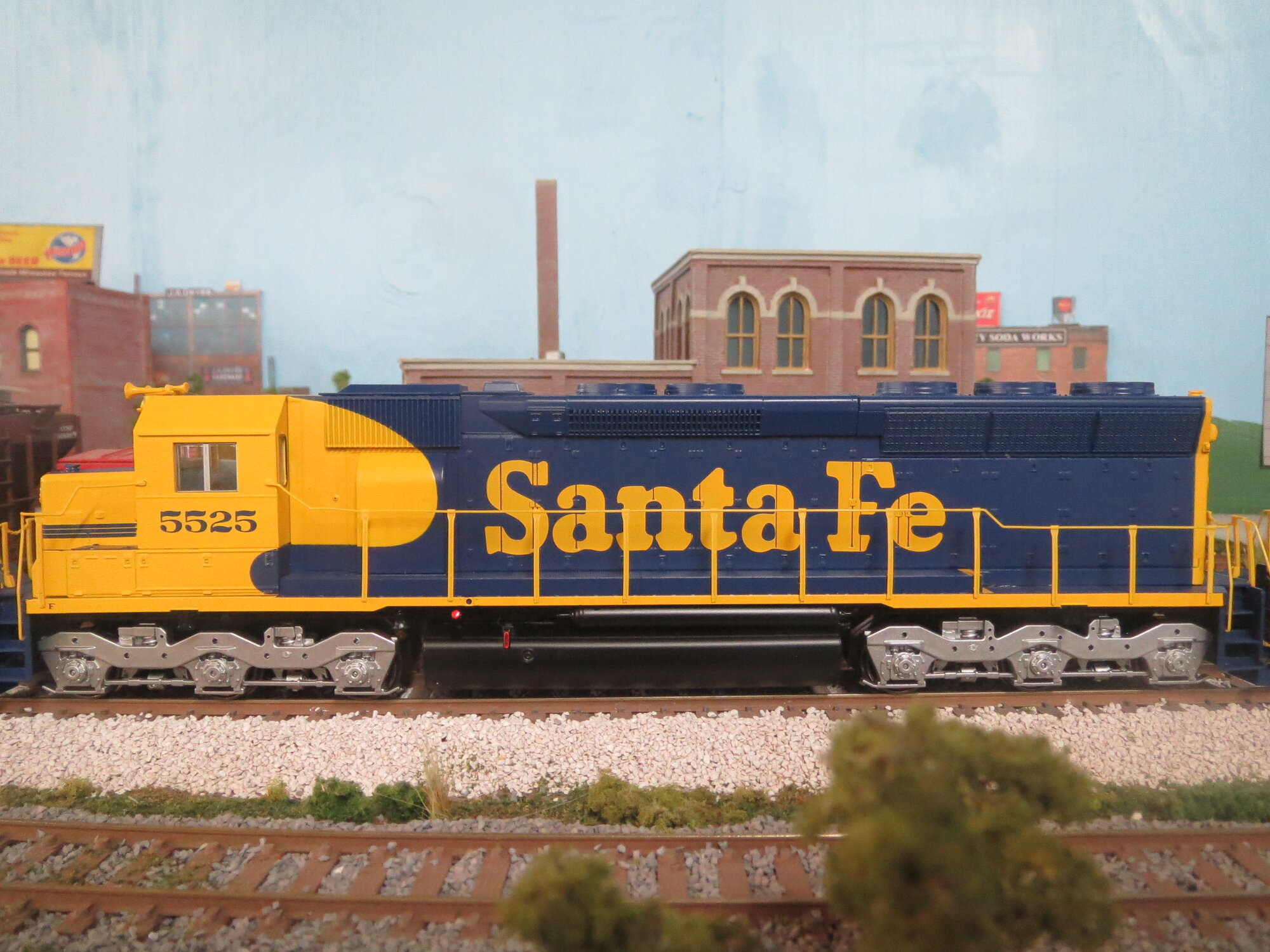 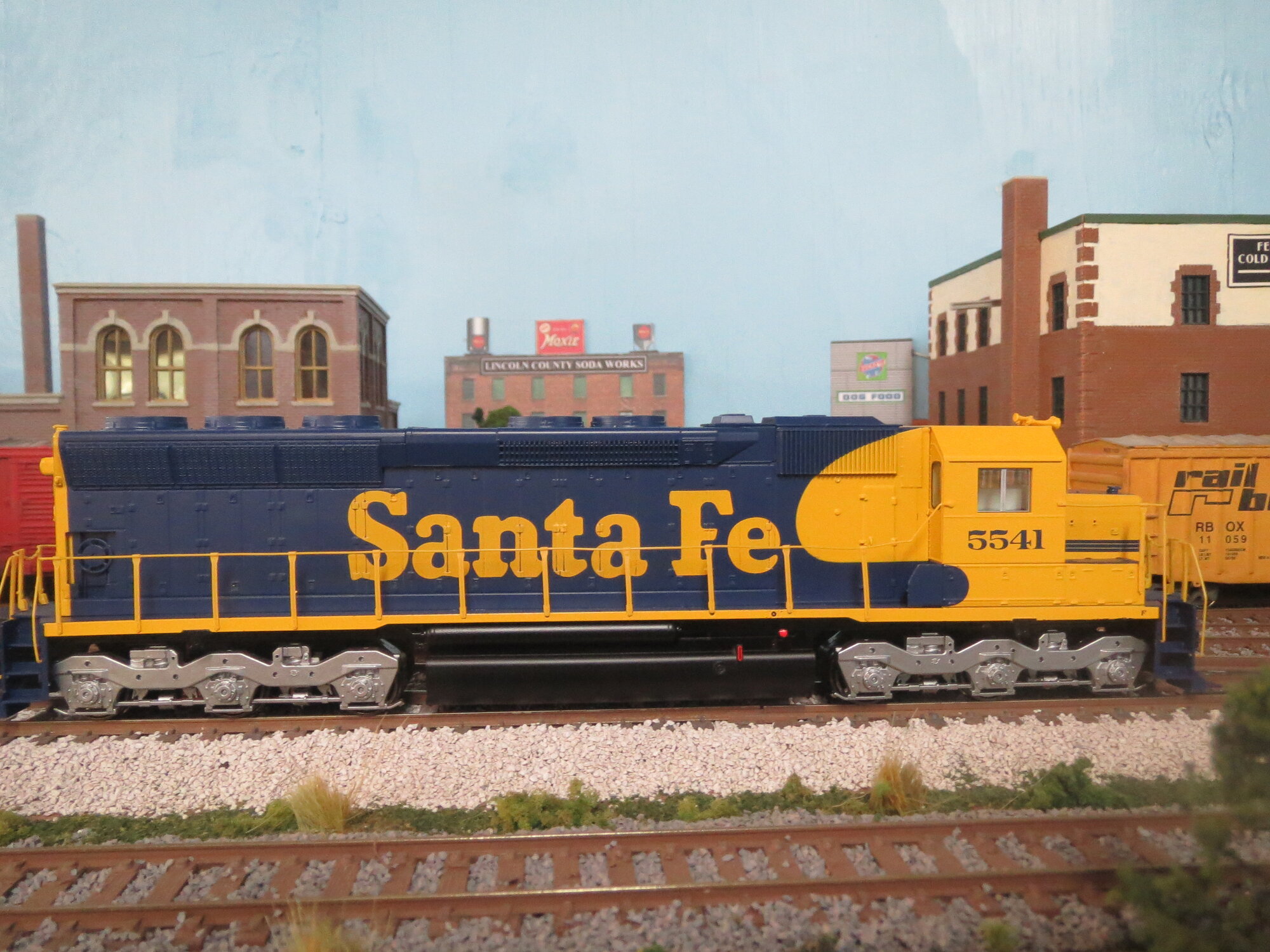 They have very detailed interiors which cannot be seen!
After giving all of them about 30 minutes of break-in running, I replaced those god-awful ScaleTrains couplers with Kadee whisker couplers. I am not really too sure why ScaleTrains felt that it was better to "reinvent the wheel"? Had to shim the Kadee's with a modified .010" washer to prevent drooping. 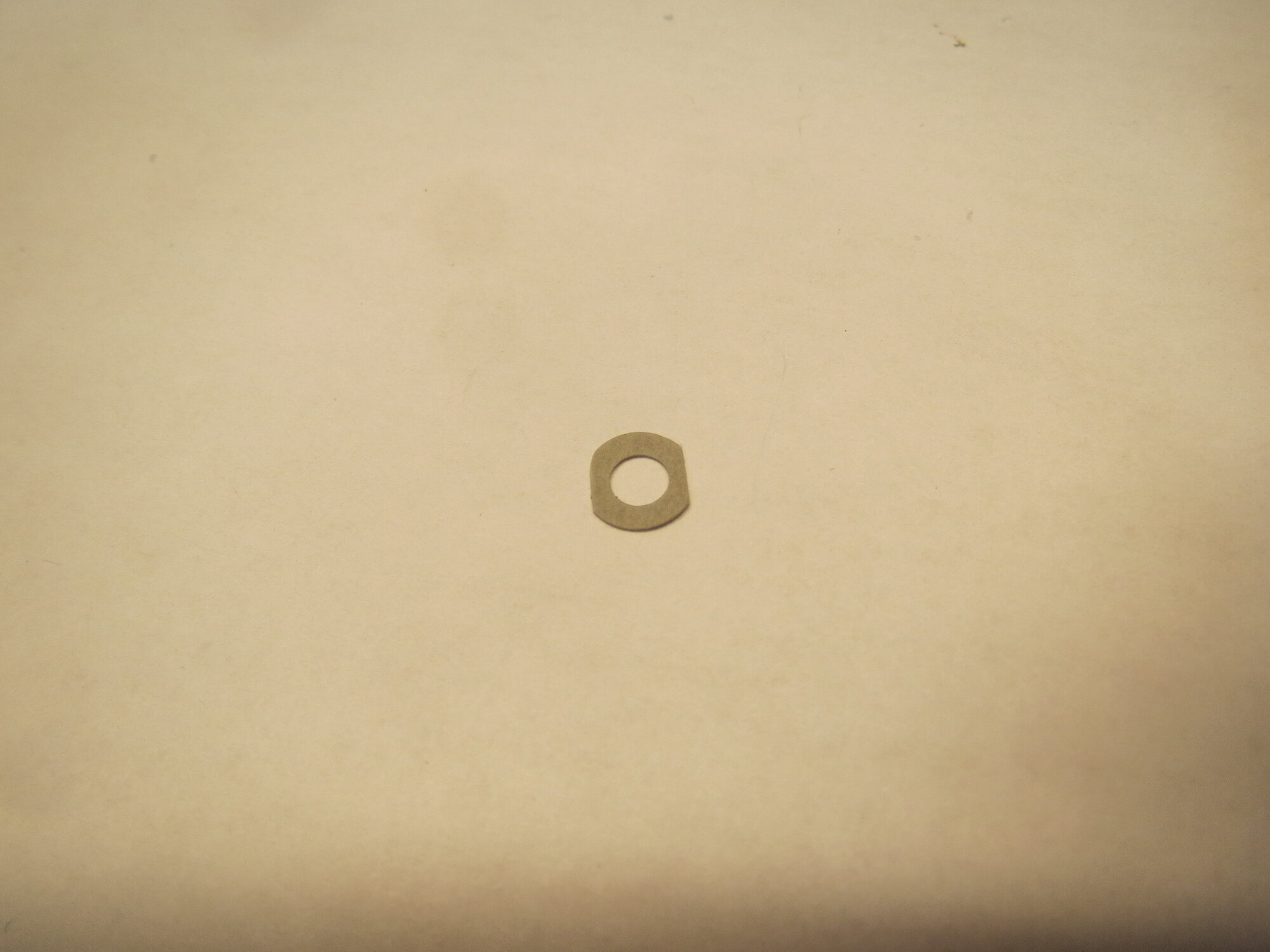 Kadee centering springs will not fit in the coupler boxes, thus the need for the whisker variety and the shim.
Unfortunately when they took pre-orders, only the "Operator" model was available for ATSF, and there was no information regarding when they might do the "Rivet Counter" version. I will be getting three of the detail kits with lift rings, grab irons, MU hoses, uncoupling levers and who knows what else. These have the same fine running mechanism as all of their higher grade models. They are really nice for less than $100 each.
I also spent a little time running my favorite locomotives, a pair of Athearn Genesis F45's. 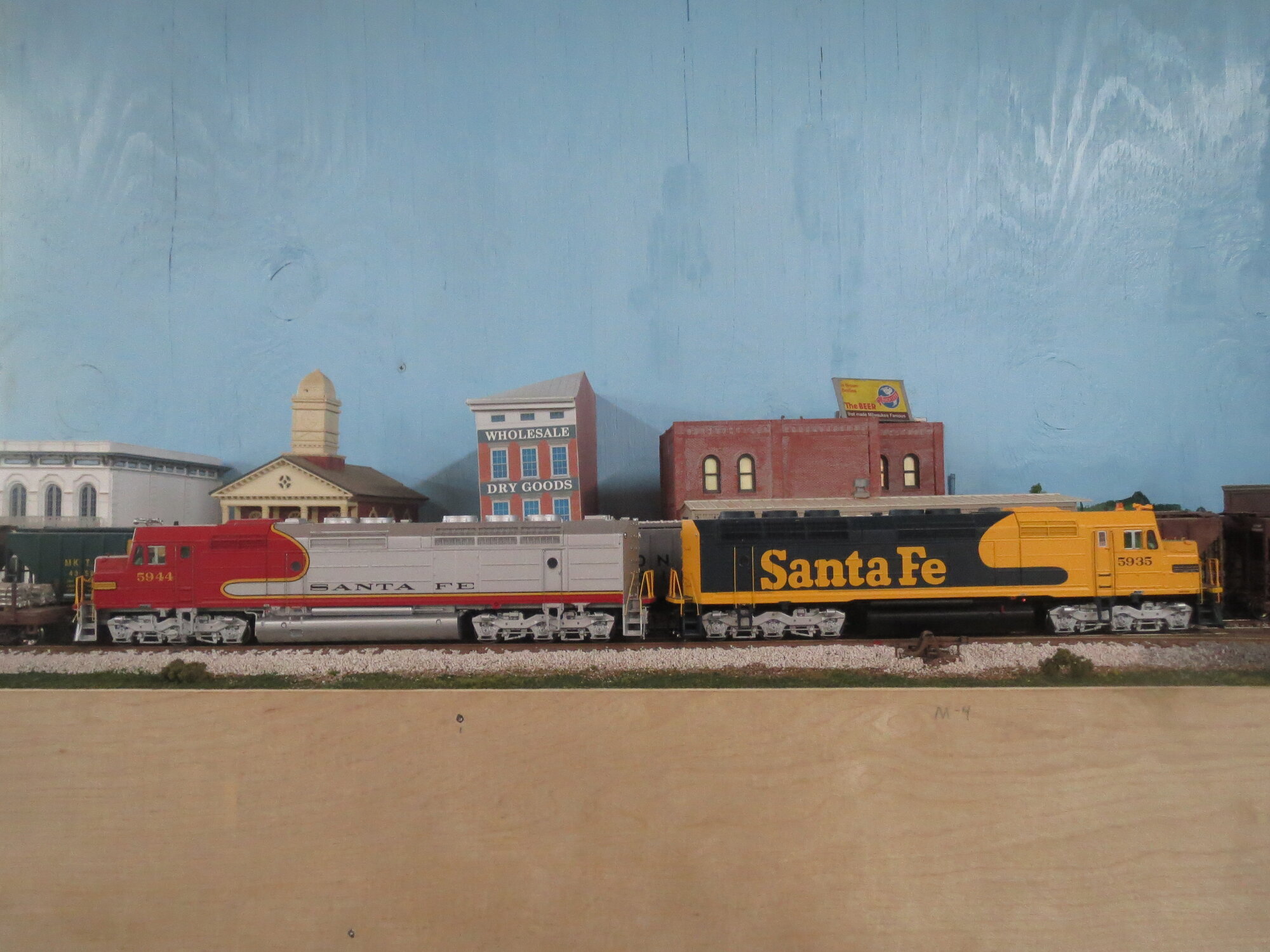 5944 is actually an FP45 that Amtrak didn't want and was used in freight service for a while.

Problem is that they brought it back in the late 80's after they eliminated most cabooses!
Curt - I can barely remember when my train shed floor was that free of clutter!

Everybody have a great day and an awesome weekend.

That’s me the day I lost my front teeth getting picked off of 1st base but instead getting hit in the mouth with the ball. That was an expensive day for my parents. A great looking scene though. Memories...

Good morning....85 and humid today. Pool side will be the theme today.

Staff member
Willie, I talked to Shane about the couplers. He said in order to use kadees, they would have to buy them, pack them, ship them to China, then get the stuff shipped back here. All the extra handling, plus actually paying for the Kadees, would add as much as $10 per unit. What amounts to a 10% Kadee surcharge would hurt their sales. A question about making the coupler pockets more Kadee friendly was not answered.

Good morning from the deck in So. Central Wisconsin. Heat index later will be 100+ but it’s ok right now. Politics, nope but sports I am ok with. Politics within sports I don’t mind because a guy who makes 5 or 10 million a year has no clue what real working people go through. Hockey players and baseball players starting out do but after that 2nd contract they become out of touch. I really don’t think whatever a sports celebrity says people pay that much attention too. Everything is a phase.

My trains and the layout are important to me as are the daily pictures posted here. Flo, my first meal here, English muffin and a diet Dr. Pepper please! When unsure of food in a diner, English muffins are a safe choice. Grilled cheese is another. While I would love a breakfast burrito or taco, the doctor says not yet!

ok, my modeling bench is seldom this clean, but the picture is about the plastic extrusion factory above it. The 12” x 84” area above the bench is my program track, my scenic experimenting area and the connection if I want to run the layout continuously. To the left of the Railbox the lift out section fits in and crosses the aisle to the tree tunnel south of the Paper Mill. 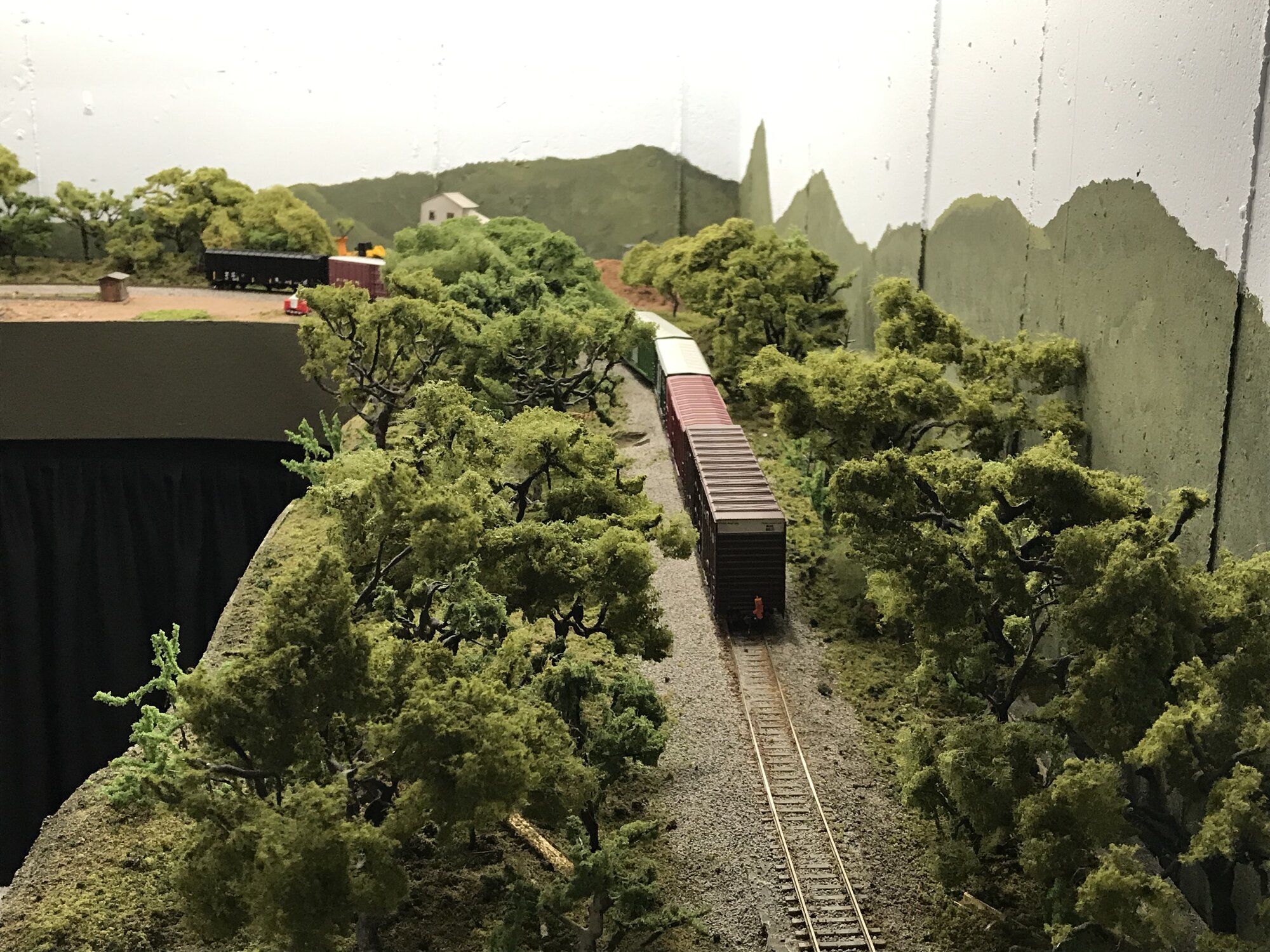 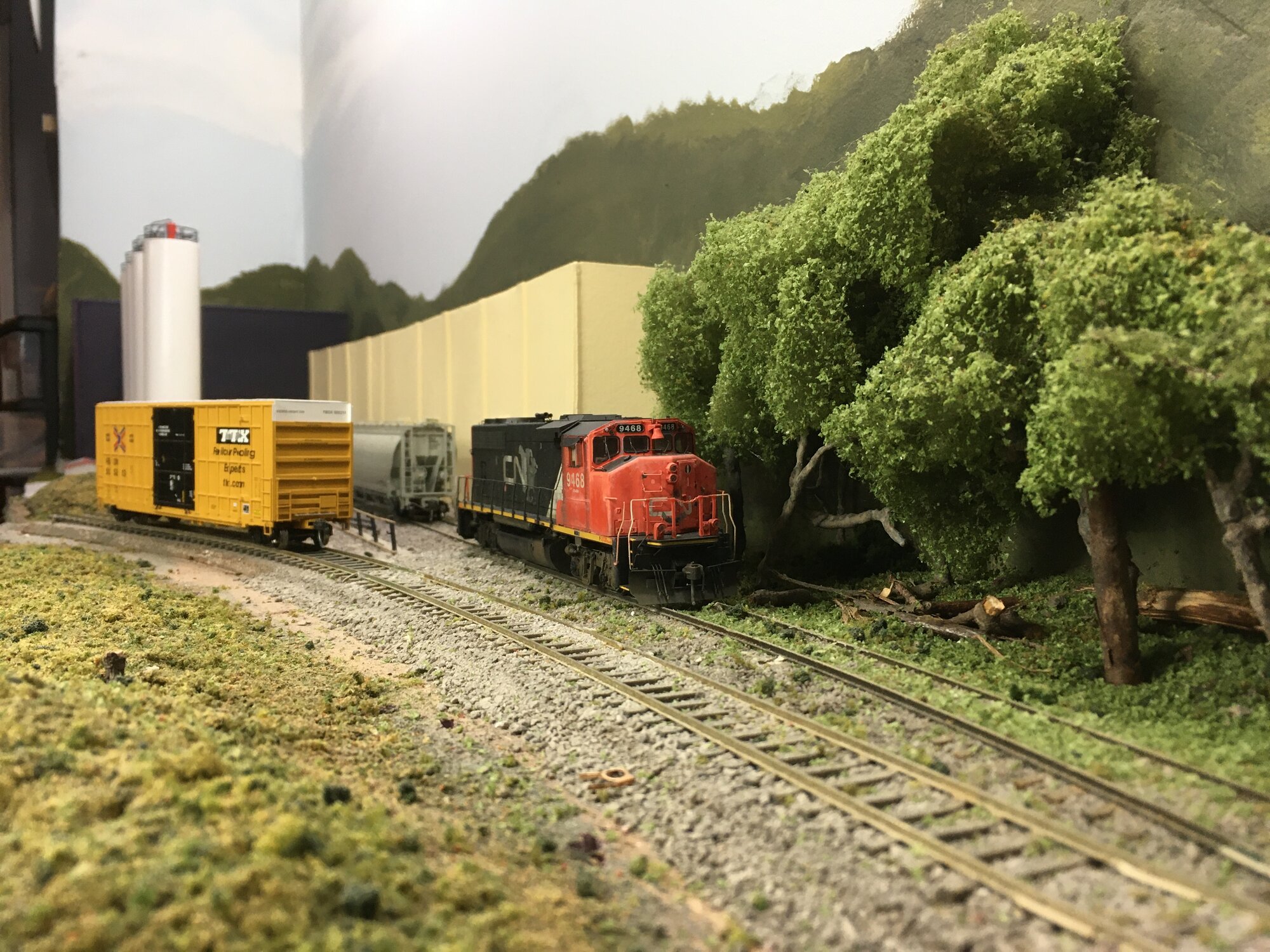 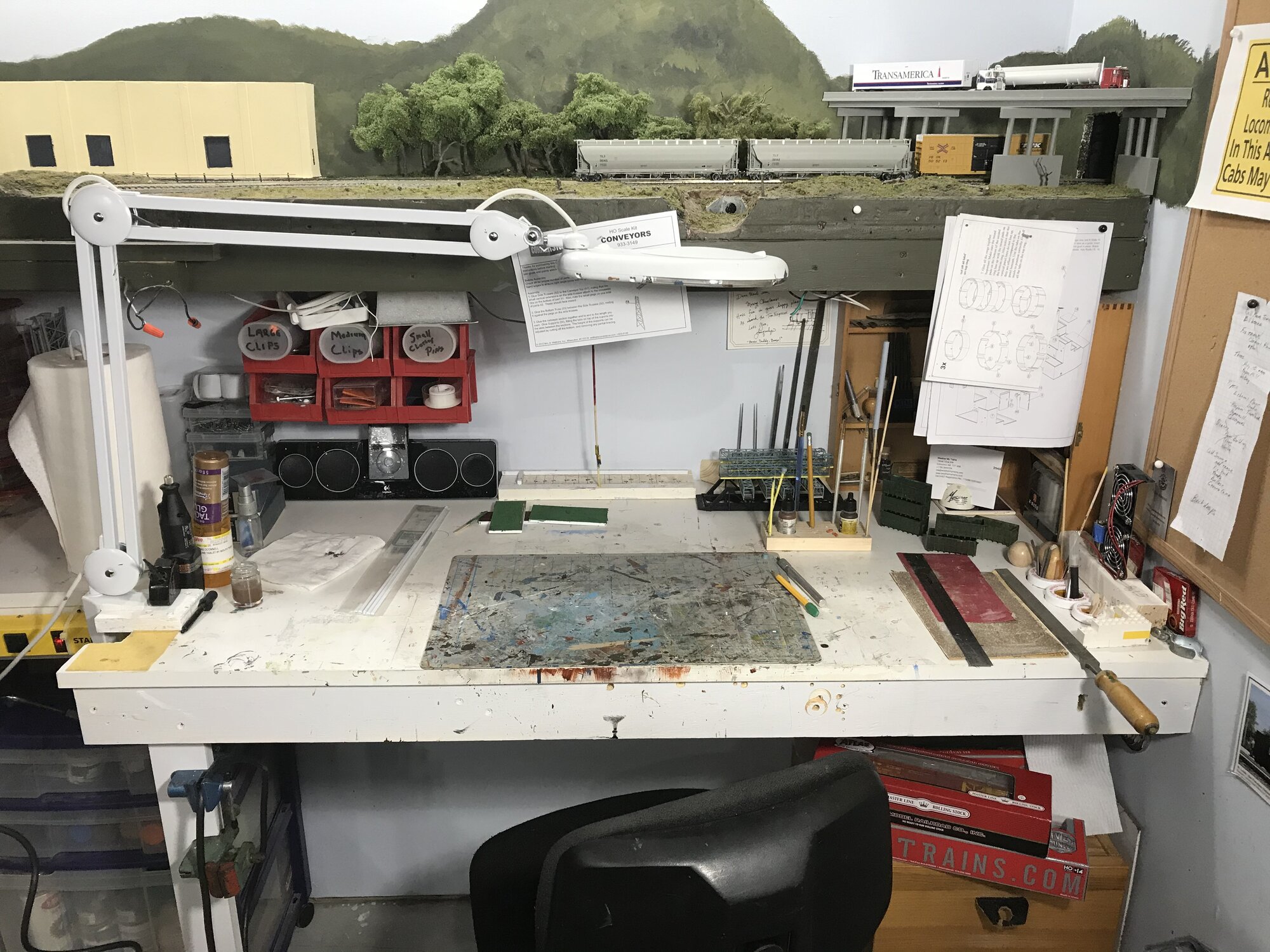 Willie ..... Those locomotives look great. I probably will not be acquiring new locomotives for a while because I don't want to buy anything from China. I did not feel that way before the China virus.

Terry ... I've herd that explanation before about Kadee couplers not being used for Chinese made model locomotives.

Tom O .... Your layout looks great. with plenty of trees.

Louis ... Thanks for being considerate. Unfortunately, the media spends too much time talking about what players are doing off the field or off the basketball court instead of the accomplishments of athletes while playing the games. 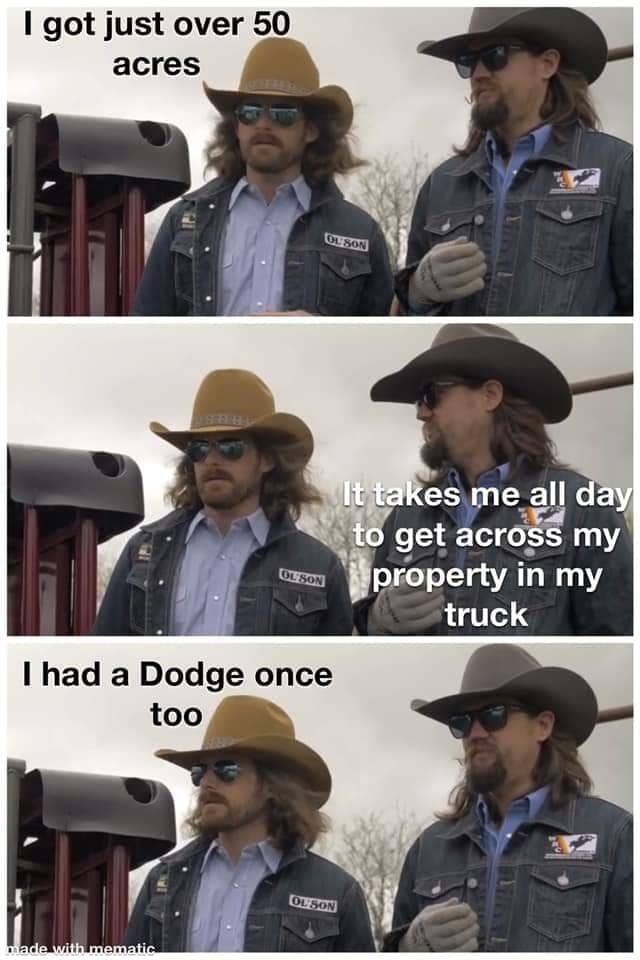 bnsf971 said:
Willie, I talked to Shane about the couplers. He said in order to use kadees, they would have to buy them, pack them, ship them to China, then get the stuff shipped back here. All the extra handling, plus actually paying for the Kadees, would add as much as $10 per unit. What amounts to a 10% Kadee surcharge would hurt their sales. A question about making the coupler pockets more Kadee friendly was not answered.
Click to expand...

I understand about the couplers themselves, it's the coupler pockets that irritates me. The whiskers work, but not as well as they are designed to work due to the narrower pocket.

Staff member
Watch it there, TERRY! (I had a Dodge - remember?)

Good morning - 59 degrees on the way to 86 today with sunny-breezy!
FLO - A couple of eggs, sausage, and cheese biscuits to go, please!

WILLIE -- Nice looking SD-45's -- Frisco drivers sure liked the ones they had. Management didn't!

CURT - WOW - I am really impressed with your benchwork construction - magnificent looking!

Staff member
An answer to the "Babyface" Baldwin...
The Baldwin DR-4-4-1500 began production in November, 1947 using a carbody design that can only be described as unique. Similar to EMD's cab units that featured a streamlined design with a sloped front nose ahead of the crew cab, the DR-4-4-1500 was much lower with large windows, giving it the appearance of an infant's face thus it was dubbed the "Baby Face."
The DR-4-4-1500 was meant to be used in passenger service but its design was never popular with railroads and few found their way in regular use on passenger trains. Instead, the railroads that did buy them often employed them in freight service, even though this was not Baldwin's original intention.