Got my interest Ken!!! Loving every bit of your layout!!
R

KenL, the thing I hate about your steelmill posting is it makes me want to come by and see it in person, but too far away . I enjoy watching your progress and look forward to every photo post.
N

Awesome ken, any steel fan would want your work

Josh/Rex/Bob, thank you all for the encouraging feedback - makes the work "worth the pain" as Rex mentioned in the WPF.

BTW Rex - are you going to the National Show in Philly this year? If so, you'll be driving past my neighborhood...

Don't think that I will make it to Philly, but I may take the CFO to Memphis for the SER show in June. I guess that you will just have to post more and more photos (w/sound narration, of course) .
D

And Ken thinks his modeling skills aren't that good. I say bull, those steel plant buildings and details, and your ideas for lighting are excellent!!!

Thats kind of you to say David but I am comparing myself to the likes of Dean Freytag, Mike Rabbitt and Jeff Borne - all of them steel modeling legends. They were doing this kind of stuff long before Walthers ever released their series of steel mill kits that got me started.

Last weekend (01-20-06) I was preparing o reinstall the building for my Basic Oxygen Furnace mill, when I ran into some last-minute "issues" (which were discussed in a previous post here). Well, this picks up where I left off back then.

In the first image, I've placed the West end covering of the charging area on the layout. I test-rolled some hot-metal "submarine" cars as far in as I could to check clearances BEFORE reinstalling all the rest of the building! 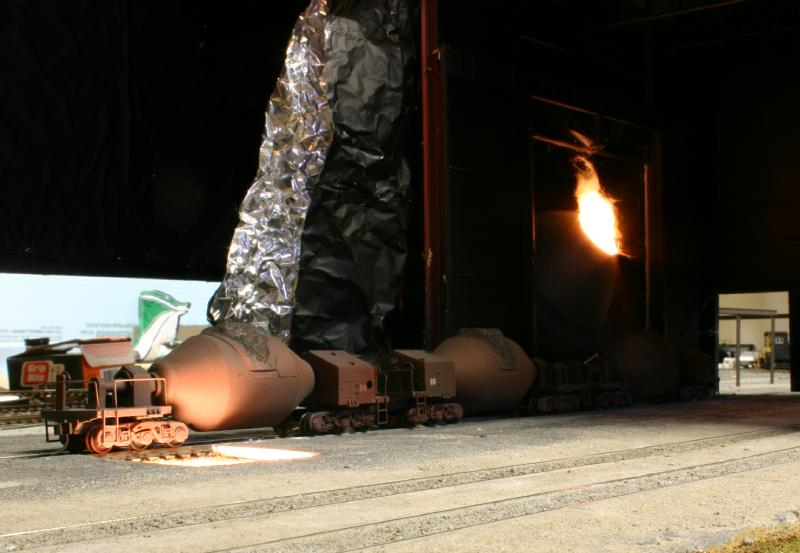 The clearances were verified to be OK, so everything else went on, and out came the ol' camera! For starters, here's an overall view of the East end of the BOF shop (that's my 7yr-old daughter Stephanie in the lower-right corner)... 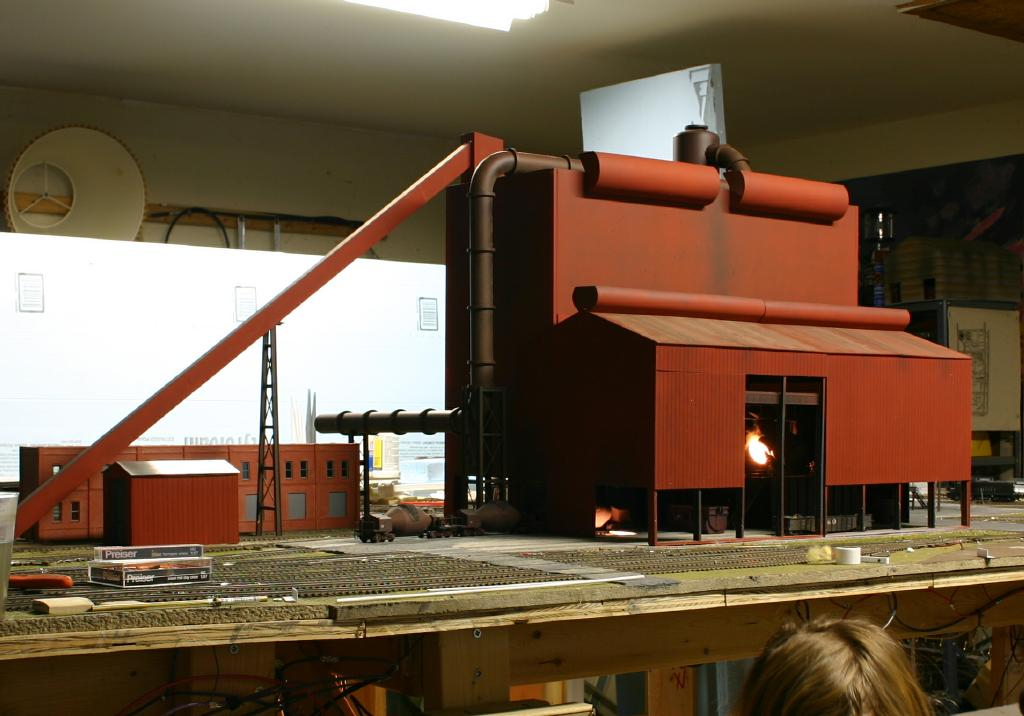 ...and a view of the West end, including the ingot teeming area: 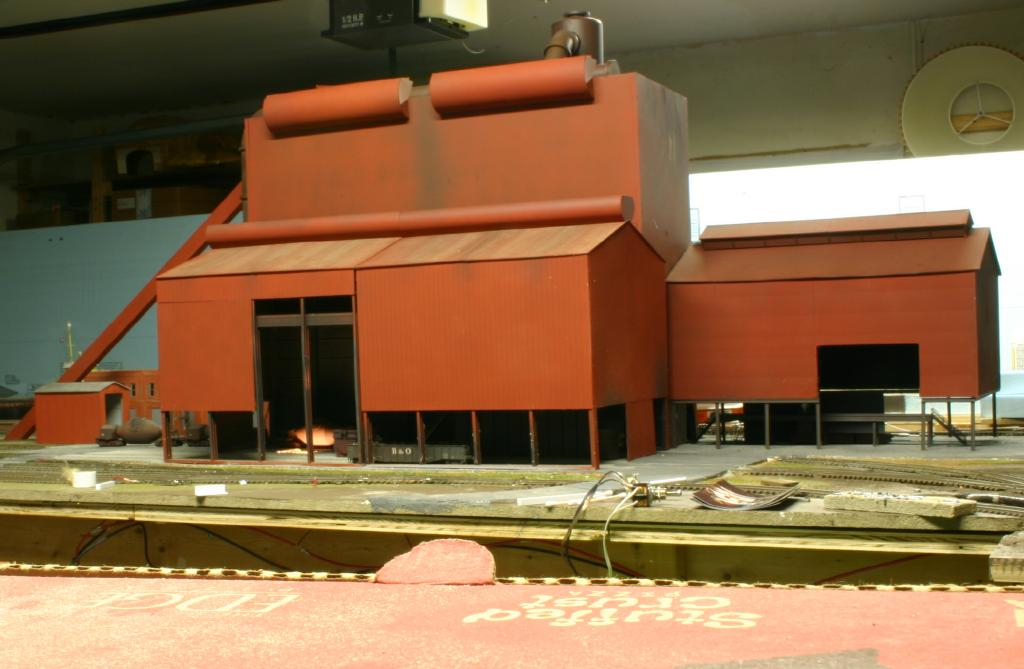 A closeup view of the "charging" area: 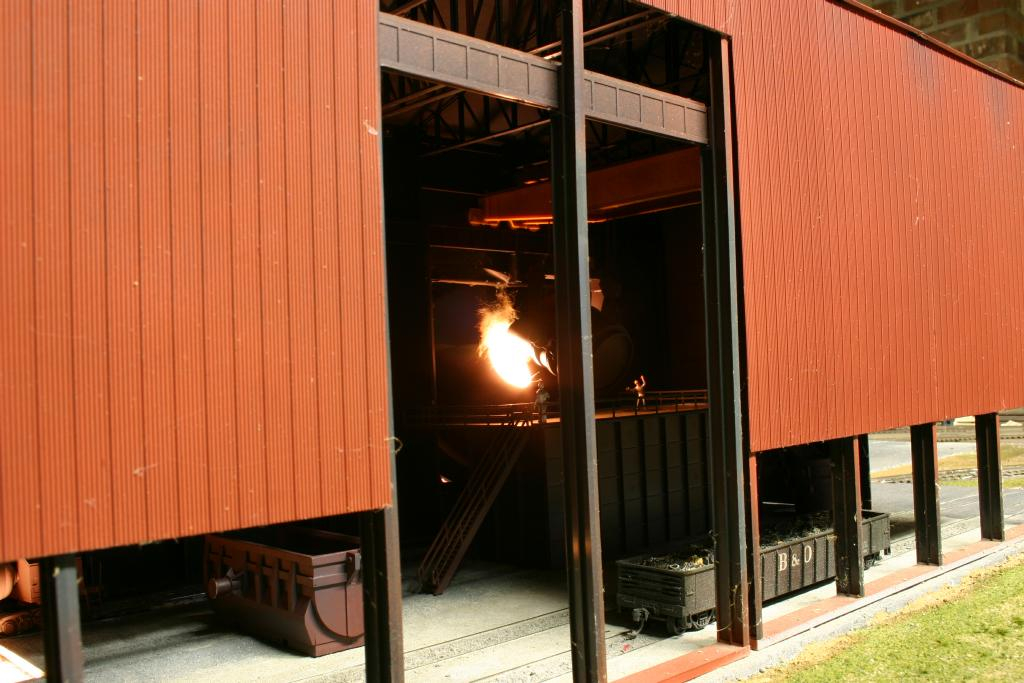 An even closer-upper view of a hot iron charge:

WOW ,,, Ken, I just found this thread and I'm totally blown away by what you are doing. It looks fantastic. keep up the great work and keep the photos comming

I am very impressed Ken

The past 7 days have had me adding a few of the less-interesting 'support' facilities to the Iron Belt from the previous layout: the coke ovens and the ingot-stripping facility. Each installation required some adaptive scratchbuilding for a proper fit.

First, a little blast-from-the-past - an ancient (1998) photo of the standalone stripper crane as it appeared on the old layout: 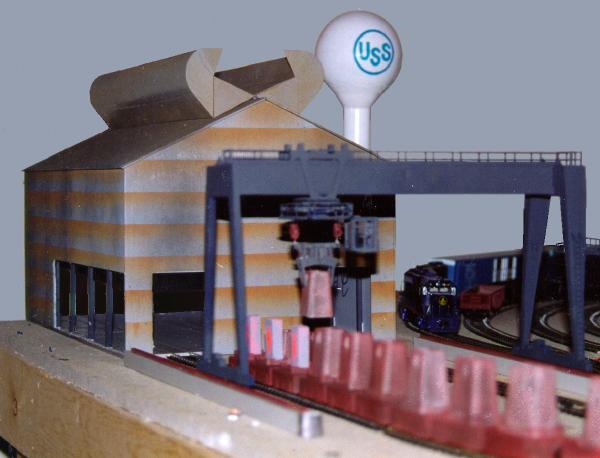 As the photo shows, the rails had to be raised a scale 3 feet in order for it to be able to hoist the moulds completely over the stripped ingots - not big deal, when there were no paved surfaces to accommodate. Unfortunately this was not the case on the new layout, and the rail slabs just didn't look "right"... 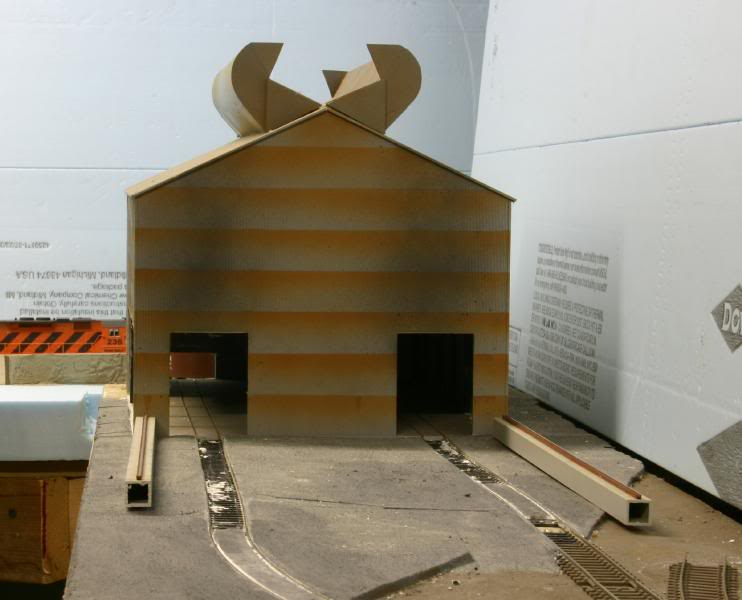 ...so, in order to make the work area under the stripper crane seem more 'open', a crane support frame had to be constructed: 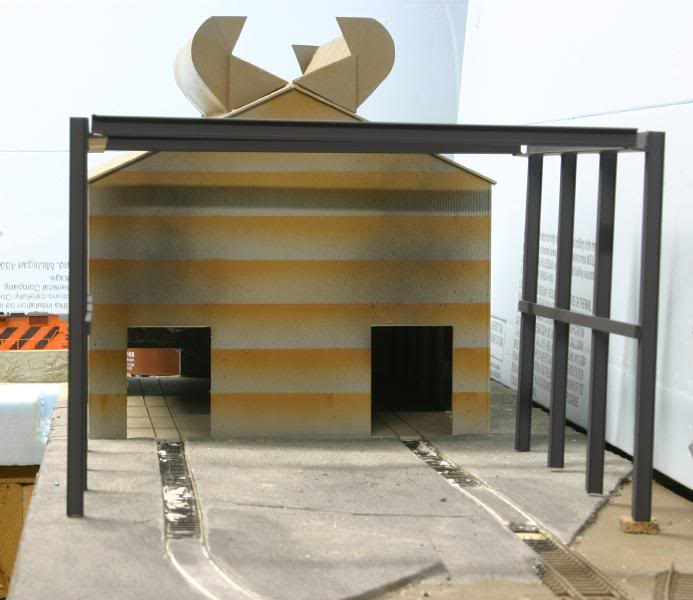 Since the crane would be elevated by the support frame, the legs were no longer needed so they had to be removed. The wheel housings were re-attached directly to each end of the crane itself: Here is a preliminary "ground level" view of the modified stripper crane with a sample payload: Another view, looking up up from underneath: 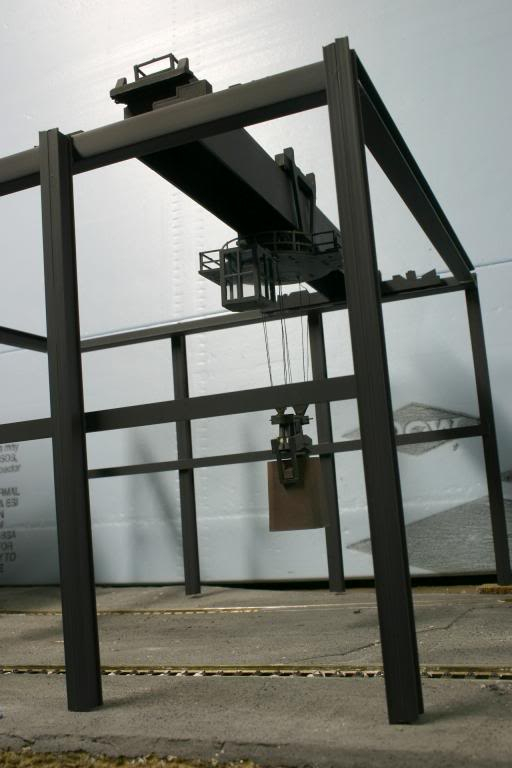 ...and a top view looking downward: In addition to the ingot stripper facility, I also restored the coke ovens to the layout. Since they now receive all of their coal via a rotary dumper, the conveyor configuration had to be modified to reflect the dumper's location. The conveyor would now need to enter the receiving bunker on a perpendicular plane, not parallel as in the original Walthers kit. This required me to scratchbuild a small junction house to be attached onto the bunker roof: In order for trains on the spur below to clear the repositioned conveyor, a semi-underground loading house had to be built to support the bottom at an adequate height: By now you've seen numerous images of the rotary coal dumper sitting oasis-like in front of the ore unloading area. Here is a view of it along with the facility it is supposed to serve: At this point, it's probably time to start building some of those unassembled Walthers Cornerstone kits and place them on the layout in their planned locations. See you next week [hopefully]!
D

Looking really good Ken. I need to tell a friend of mine about the pictures. He's modeling Keystone Steel & Wire in Bartonville IL. He would really like the way you have setup the plant.

Looking good Ken!!! I look farward to the days of looking at your layout!

Thanx for the feedback Josh and David!

Dave, it appears that Keystone is a modern "mini-mill" - where their raw material consists solely of scrap metal, melted in an electric arc furnace (EAF) - at least that is what Keystone's process website indicates. I didn't have the space to fit an EAF mill on my layout [hmmm, I wonder why? ] but they make pretty exciting models in their own right.

Looking good Ken, i'll be glad when i get more time to do MR ing

Another two weeks, and another two structures have appeared on the Iron Belt. Both of them are essentially "vanilla" Walthers Cornerstone kits, but their uses are a bit different from what Walthers' design engineers had in mind. I bought each of them 5 years ago and I'm glad I did, because they have been out of production for awhile now.

I discovered early-on that trying to connect my blast furnace highline to the rest to the layout would complicate access to the interior of the northern half - I had to nix the plan. To minimize the pain of this loss, I decided to setup some type of mechanism for coke to be delivered to the blast furnace independently of the railroad. The concept was simple enough: An overhead bin at the end of the highline, fed by a conveyor coming directly from the coke wharf, would feed coke into the transfer car.

Luckily I had just the structure to play the part: a small Walthers coal "flood" loader that I had originally planned to use along the main line before my last major track plan revision. Assembling the kit was easy enough, but I did have to relocate the conveyor feed hole on a different side, at a 90-degree angle from its original spot. I also had to scratchbuild an extension for the structure to sit on, since the high line was already too short to accommodate the entire raw materials pit.

Here is a view of the completed floodloader at its new home, with the conveyor rising up from beside the coke wharf: 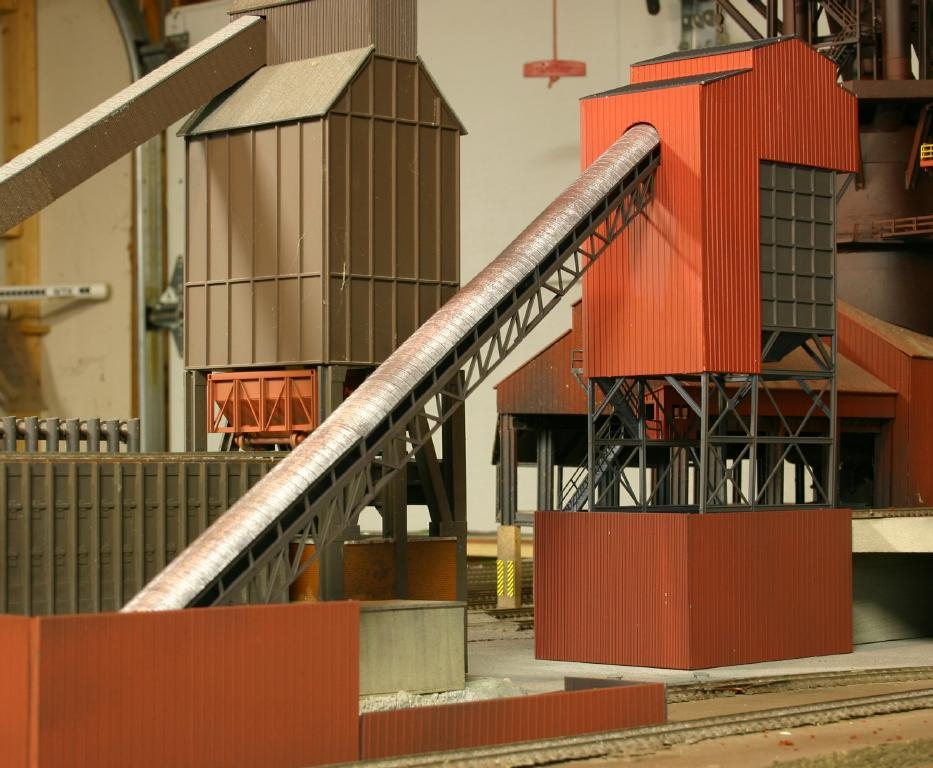 I used a painted clapboard 'vent' to cover up the original conveyor opening: 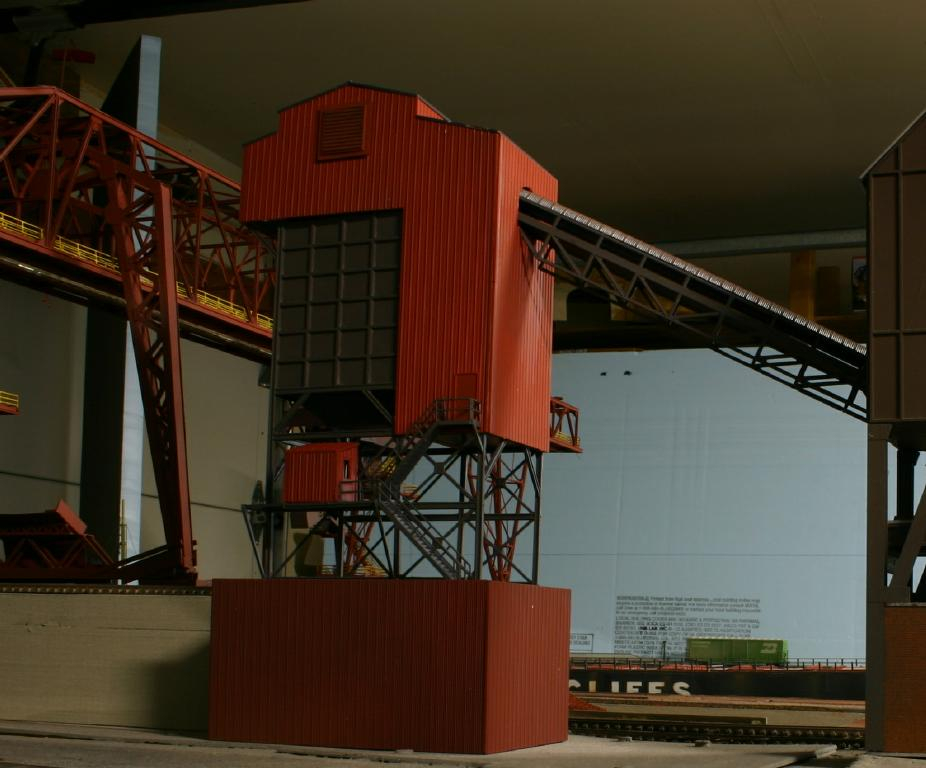 Now there is no mystery as to how the coke chips find their way to the blast furnace from the coke ovens!

All Things Must Come To An End...

...especially BOF downcomers! When I first erected the BOF building on my previous layout, the far end of the downcomer pipe was against a brick wall - literally! Actually it was my basement wall...and on that tiny piece of real estate, there was no place for me to fit a bag house! [Bag houses are so named because their function is similar to the bag in a vacuum cleaner, trapping dust particles to be emptied later.] Since my new mill is now visible from both sides, I felt compelled to put in something - and the Walthers Tri-State Power Authority seemed to fit like a glove. It is the same general size and shape of the baghouse I saw at Gulf States Steel Corporation's BOP facility in Gadsden, Alabama, except for the Venturi stack [which I plan to add later]. 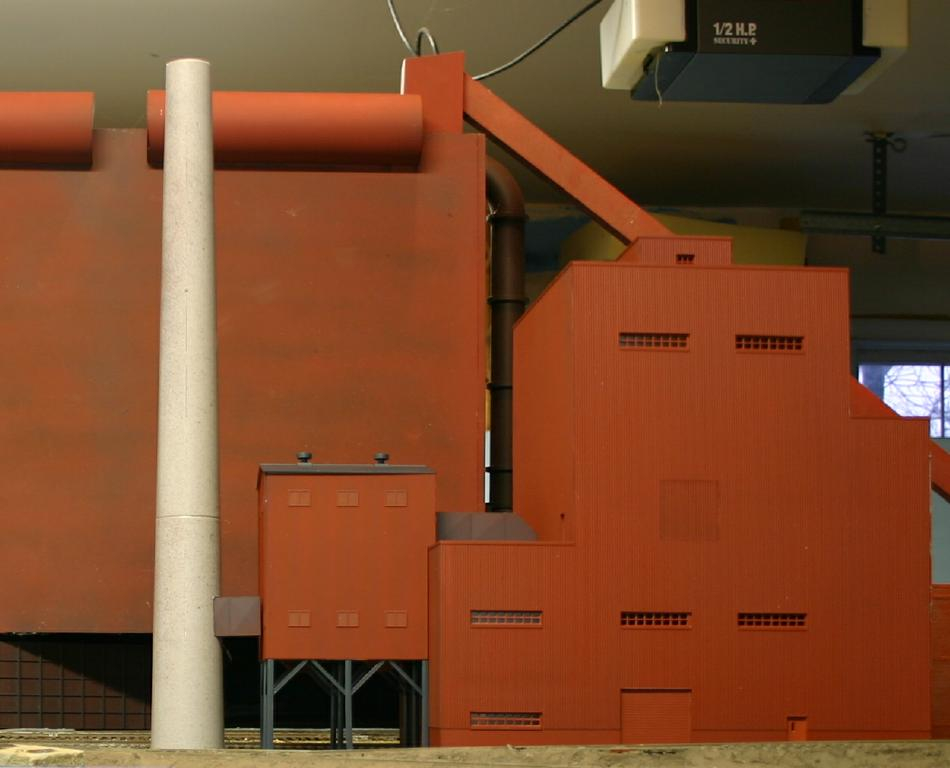 Here's what the downcomer looks like from the front of the BOF building as it "disappears" into the baghouse: ...and a perpendicular view from the rear of the BOF building, looking down along the utility spur: About it!!!??? Geeze that's some big industry going on there!! I really need to start building something.

Love those wobbly tracks in the last pic, really prototypical.

Thanx Ken, actually the tracks always come out that way [squiggley] whether I want them to or not - that's how flex track is for me anyway. I suppose that somewhere, somebody has written a technique for ensuring perfectly-straight mainline tracks, but I haven't seen it yet! [Luckily the track in the photo is only for parking coal cars.]

Nice work again Ken, i was reading about the bag house in our company book "Paccar the persuit of quallity" there is allsorts of information about when they made steel in Seattle and the process involved including how much waste the Bag house collected per hour.

Steve B said:
Nice work again Ken, i was reading about the bag house in our company book "Paccar the persuit of quallity" there is allsorts of information about when they made steel in Seattle and the process involved including how much waste the Bag house collected per hour.
Click to expand...