How to build a fancy prototypical Northern Pacific Depot

Watch all the steps of building this depot. Cost less than $25 in materials, with several useful items left over. This Depot was in use during the steam era and up until 1955 as shown.

Nice video. I would probably attempt something like this if I needed another passenger station. Well done.

Great video...make a terminal for me please.

Great video of an awesome terminal

Dave, great build on the Depot. I haven't scratch built anything yet, put together the Campbells Quinchy oil buildings & kit-bashed I believe what was a Revell pump house for the Quincy set.

Chet, Greg, Edsland, Jerry--- Thanks for your comments!

That's an awesome building Dave.
Very meticulously done and the attention to details is what makes it outstanding.

Very nice job. I will have to remember that video as in the future I want to build a Santa Fe station like this one. I imagine it will be less difficult. 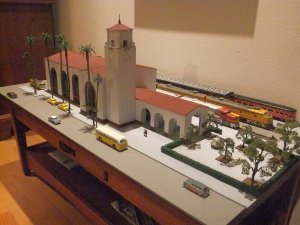 Thanks, Borland-- That is a nice looking station you are considering!
B

I looked thru a large number of images on google, but found none i liked as much as this. I forget where I found the image, but I think I have had in on a old thrumb drive for quite a long time. It may have been from some train show out west that someone was reporting on, and I saved it for future use.

My new layout will have this general theme of stretching from the east coast (Balt, ....B&O, C&O lines) to the west coast (Santa Fe on the upper level). I have a lot of nice Santa Fe locos, some of which need to be staged around such a station.
You must log in or register to reply here.
Share:
Facebook Twitter Reddit Pinterest Tumblr WhatsApp Email Share Link