Hello all. I'm looking for modern day high rises in HO scale. Most of them will me backdrop. Does anyone have any ideas? Or would I have to make my own?

For some reason i thought i remembered KATO having High Rises Buildings? I think Kibri or Faller might also have a couple you might be able to use and kitbash to make them to look more American, that is if your looking to model American High Rises.... lol
S

Not what you asked for - but may help for backgrounds
http://www.skyscrapercity.com/showthread.php?t=142692

Paul, not a clue, since I left the West in 2005 but it's a pretty impressive building. How much does that whole thing weigh?

John, if you look at Larry's picture, you'll see he did some pretty creative things with air filters. There are other found objects that can be made to look like skyscrapers with a little imagination. I know one guy who used cereal boxes painted white or bronze with plastic strips for the outside floor supports and black electrical tape for the windows. It wouldn't have looked too good at the front of the layout but looked remarkably realistic four feet back. Rix's Smalltown USA has one five story building at http://www.rixproducts.com/kelsey_nicole.htm that would be easy to add on to with the modular windows and Plastistruct materials used in the kit. City Classics also has a nice line of inexpensive five story buildings that would also be easy to add on to. If you're looking for really modern glass and steel types, Kibri and Faller both have one but they are really expensive and kind of ugly. You would need to rework them to look more American.

Thanks Guys for the advice. It's tough to find modern day stuff in HO scale. Hey kjd that is one impressive building. What did you use that for anyway? Larry, that's pretty creative. How much did all those air filters cost you man. Those things aren't cheap! I've looded at Kibri and Faller and those would take too much to make them look American and yes they are very expensive.

The building is made out of plywood, acrylic sheet and polyurathane foam. It is the WaMu Center. The building in the front is the Seattle Art Museum. How did a modeler of the NYCS know that?

I have built lots of high rises but usually on a lot smaller scale. For high end buildings I used acrylic sheet and scribed it with a laser withour removing the protective paper. The window mullions, spandrels, etc. were uncovered and painted. If the spandrels and mullions were different colors, one was peeled then painted then remasked and the rest of it peeled and painted. Then when the rest of the paper was peeled you ended up with windows. Sometimes if a building had lots of releif, the windows with mullions would be one sheet and stone work or whatever was another sheet laid over it.

John, Those are tower fans & some of them still work. I bought them from Walmart for $5.00 ea. When I worked there from 2003 to almost 2008 when a customer brought 1 back because it didn't work or had parts missing I bought them. I originally bought 12 of them. Then I buy them at yard sales for about the same price & also people see them on my layout & give me their old junk ones out of their sheds. I take the guts out of the non working ones & add some painted plexiglass from top to bottom & wa-la a skyscraper.
There's some buildings there made out of the floroescent lite covers that are in drop ceilings. Then there's 3 NASA tall buildings made out of Shelf(painted clear plastic) retainers that I got at WM for free out of the dumpster.
Then there's a big building made out of the fan blades(round & tall) out of one of those non working fans & a little half round aluminum display mouldings out of electronics.
A lot of the Walmart Supercenters are going thru a major remodeling of the stores. If you go behind the store ""Everyday"" & check what they throwaway you get some real nice stuff. All it takes is a little imagination & a lot of trial & error. Found Junk makes nice buildings. If you had to buy one of those tall buildings in HO scale you are looking at $500.00 ea. in kit form.
I have 18 tall skyscrapers & I have about $50.00 tied up in all of them put together.

kjd said:
The building is made out of plywood, acrylic sheet and polyurathane foam. It is the WaMu Center. The building in the front is the Seattle Art Museum. How did a modeler of the NYCS know that?
Click to expand...

It helps that my second passion, after railroading, is high-rise architecture. 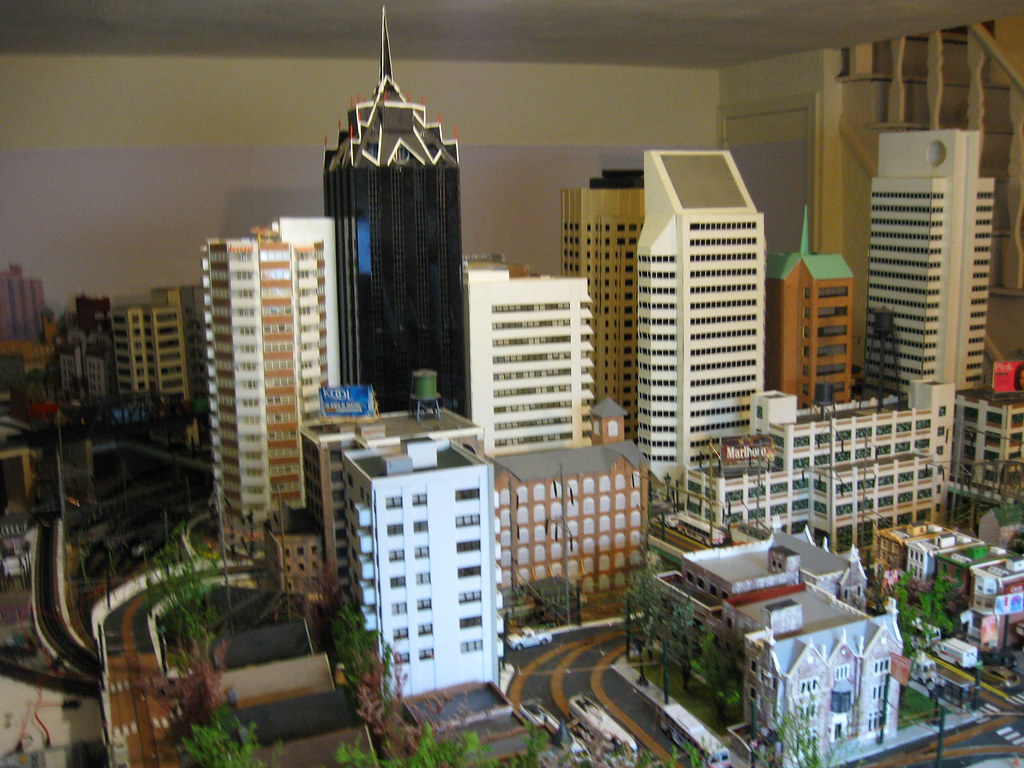 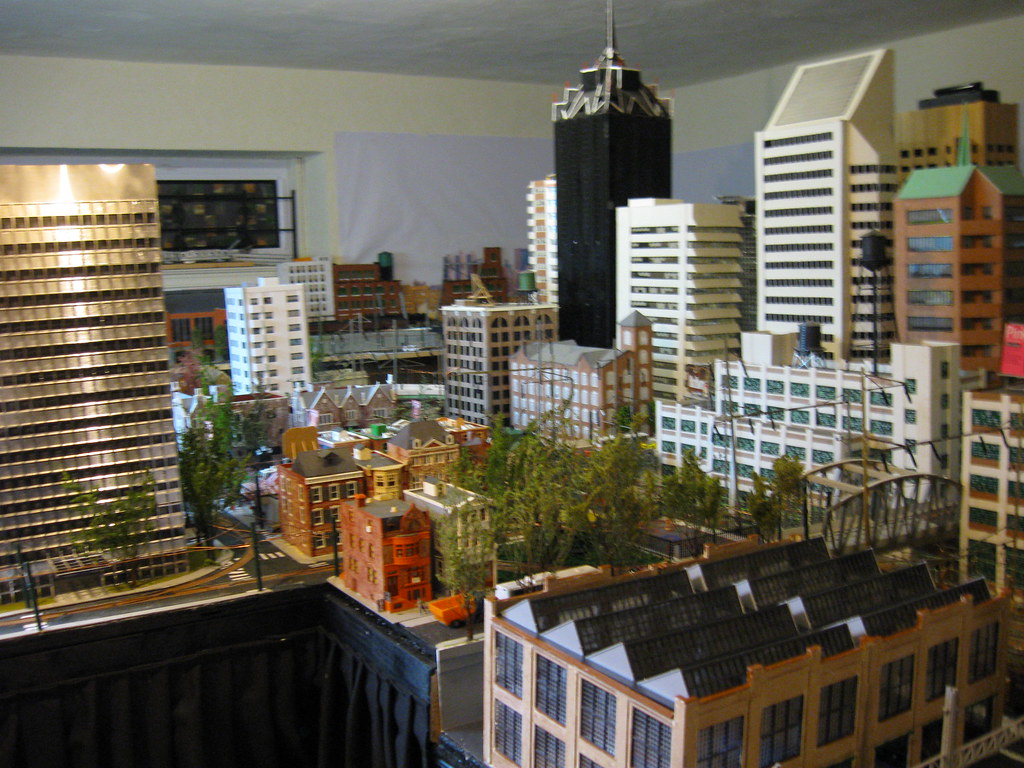 I have about 6 more High Rises and a Station Head house to Build and the Layout will be about 85 percent finished. This layout is 2 two layouts in one. one for trolleys and another for heavy traction

Very impressive indeed. Do you have any construction photos or summary of how you built them?

The buildings are made of clear and colored acrylic and lexan plastic as a building core. Styrene sheets/strips are then glued on as required. Windows are made from plastic matrix sheets and window shades are made of tape. I have not lighted the buildings yet but because of the construction it should be easy. I use a CAD program to design each building before it is built and print out exact elevations which I use as templates when building. If I had a laser cutter I would be in business.
U

Truly the work of an architect. We want more pictures of your layout! Looks like you have an interesting trolley line running through town.

Thats for the compliments
Heres a look down the main street 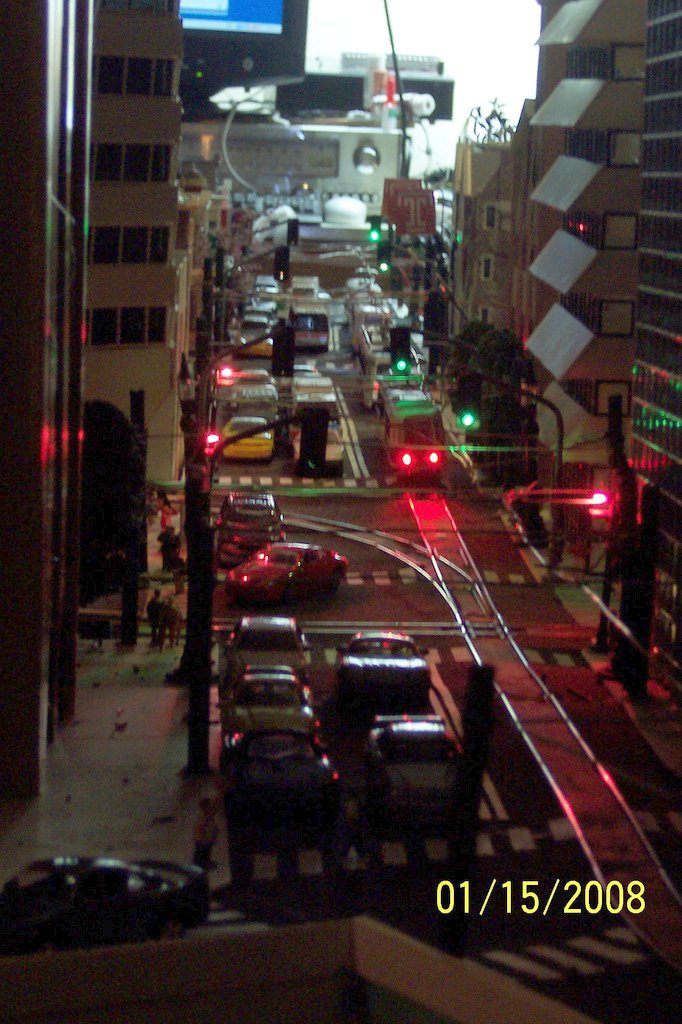 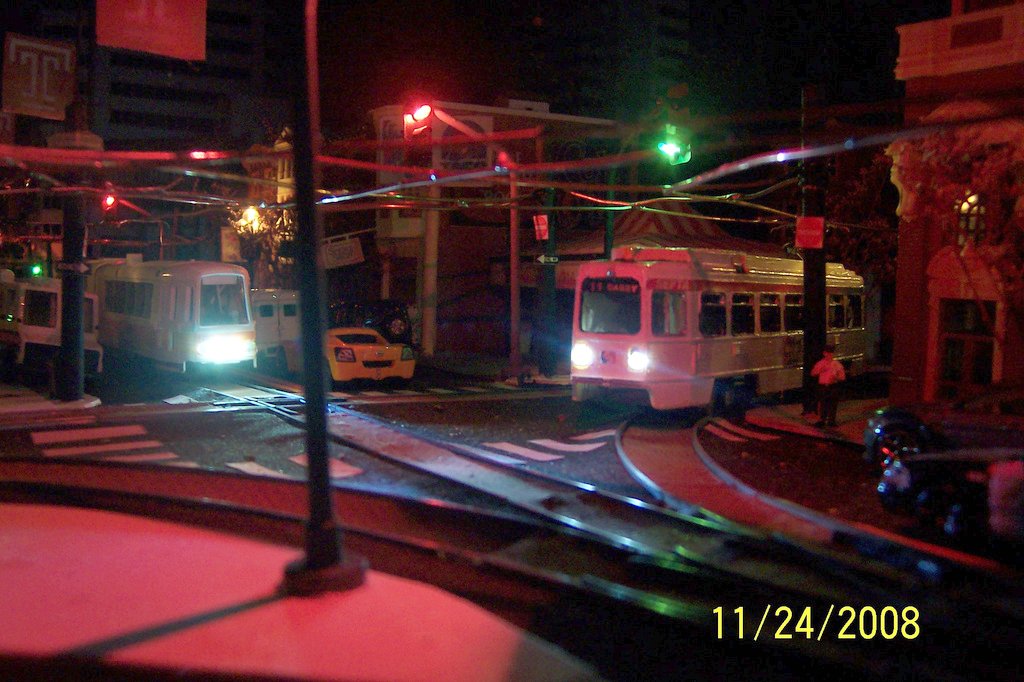 and the MASTER PLAN 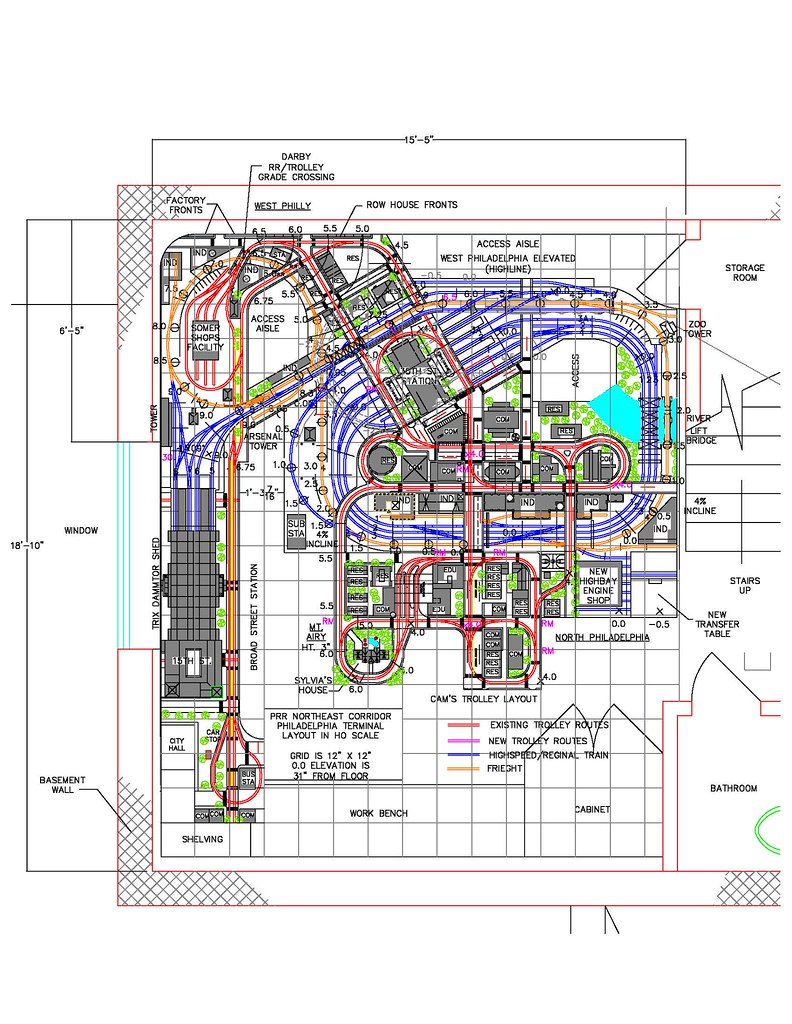 Here is a CITY tour on You Tube! showing trains in action