Difficulty with Atlas Turnouts That Will Power on, but Fail to Actually Switch (They Used to Work!)

Very new to the MRRF, very new to forums in general, etc; so apologies in advance.

Anyways, the issue I am having is quite infuriating, but I am not engineer for anything so I have to ask for help, and hope that you guys might have some ideas.


Here is the issue:

The setup shown in the pic related has four turnouts, all connected to the same power grid, and was working perfectly fine after we had set it up (that is, all four turnouts would switch easily when the corresponding switch was activated without fail) Then, after two weeks of no use, we tried using the track and none of the switches would operate functionally. We would hear the hum on the solenoid, and occasionally the little manual lever would knock back or forth as if to almost switch, but never could. Its like there isn't enough "Oomph" to actually switch the track. We used small machine silicon lubricant to try to make this as effortless as possible for the solenoid but it still isn't enough.

We live in Florida, so its humid, and our track, while covered, is outdoors. We need to clean up the track every now and then, but this hasn't caused any issue that we know of until now. Perhaps this was part of the culprit? I doubt it, personally. The track here is N Scale (9mm between tracks) and Code 80. If there is more information then let me know and I will post all I can.

I'm looking at the single strand telephone wire you have for the connections. That stuff is easy to nick when stripping back the insulation which in turn opens it to corrosion and eventual breaking. Also, the amount of insulation you have stripped back on those wires is a bit more than required. You really want to have that insulation almost to the point where the wire wraps around the terminal. That keeps em from shorting out on each other.

Having used the same wire on my HO turnouts, I can say that that single strand phone wire can be tricky. That said, I've used it in tons of application s, but agree with D&J, you need to keep the insulation as close as possible to the connection points. I'd verify that ALL your connections are tight making proper connection. I know the wire on those N-scale turnouts is a bit tiny and can partially lose contact. Also make sure they are corrosion free. ANY oxidation can cause issues. That said, Is it possible that the power pack controlling the AC power to the turnouts isn't sending enough voltage to the switches? It looks like you're using the small power pack for the train DC and AC and using the larger power pack for accessory AC?

I'd hook the AC for the turnouts to the larger power pack and see if that made a difference. IMO there's a reason they make better power packs than the small ones they give with the train sets.

Thanks for the feedback! I will verify continuity, see about shortening up the exposed wires, and connect the switches to the larger AC power pack. Once done, I will return to give feedback. Thankfully, shortening the lengths of exposed wires is an easy task.

Also, when you wrap wire around a mounting post or screw terminal, it should always be wraped in the direction that the screw will be tightened down. Most of your's are in the opposite direction.

I agree with Ken (D&J) about being against using single strand telephone wire for model railroad uses. Yes, it is hard to strip the insulation without nicking the wire and the wire itself can be brittle. I had an electrician save me telephone cable from a demo job we had under way and he saved me hundreds of feet of cable. Most of it I discarded.

I did find some telephone stranded cable that works fine when the ends of the cable have had solder applied (tinned).

I do use some of the telephone cable in certain areas, like the short runs for signal wiring. 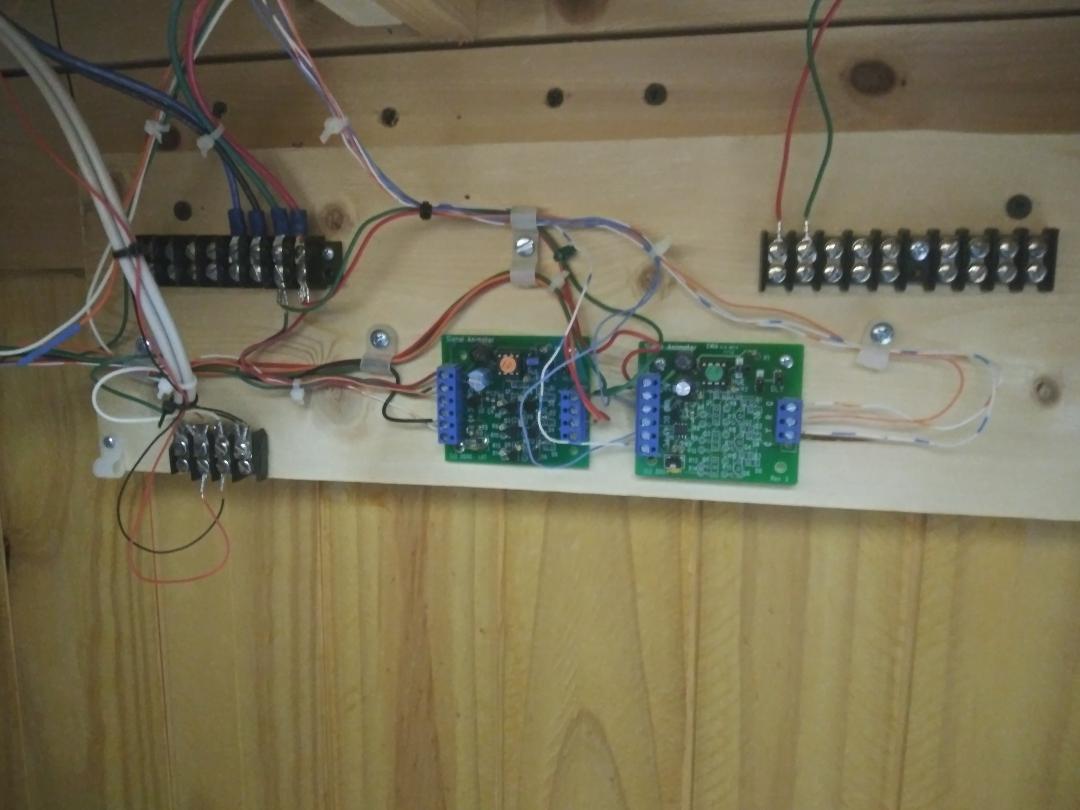 The cable in the gray shield is stranded wire. This wiring is under the layout and I can work from a rolling mechanics chair with ease.-Greg

There are a lot of sources for thin, stranded hook up wire like All Electronics for an example.

So, The first thing I did was to shorten up the exposed portions of the wires shown in the OP, once that was done, I connected the stronger of the two transformers to the switches instead of the small brown one pictured. This did the trick! While the track needed some surface polishing, everything ran fine once that was changed, and so there was a weakness present in the smaller transformer that rendered the switches faulty in their operation. A stronger current (or like, less ohms or something) was all that was needed.

Thanks for the feedback! This is pretty much my first railroad, and so Its neat to see such a helpful and sprawling community, sadly /toy/ and /diy/ don't have busy enough communities for model railroading, and I can't exactly hit up friends on snapchat about it. Appreciate ya