Ken and Bob, Thanks guys.

Ken, I'm looking for more characters. Woodland Scenics is about to get the best of my checkbook though. Those little buggers ain't cheap! 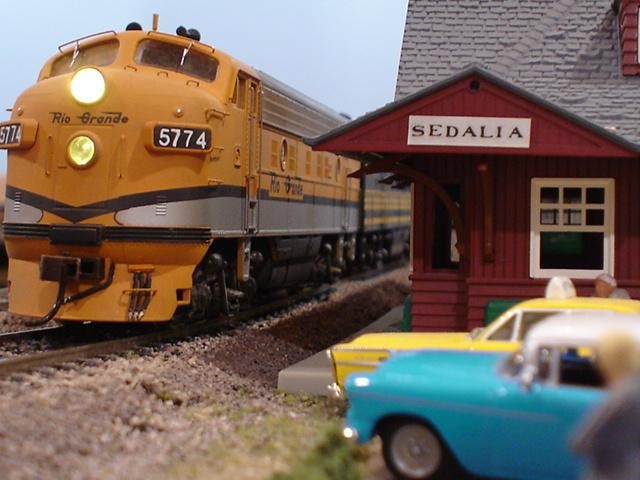 Evolution of a locomotive series, FT's pose for the camera beside an F9. 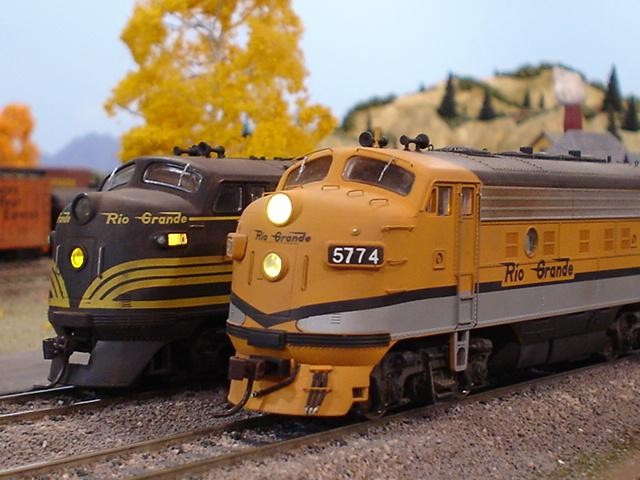 Jimmy gets to know the Mayor's daughter a little better as a new CB&Q GP30 passes by. Better watch the hands there, Jimmy! 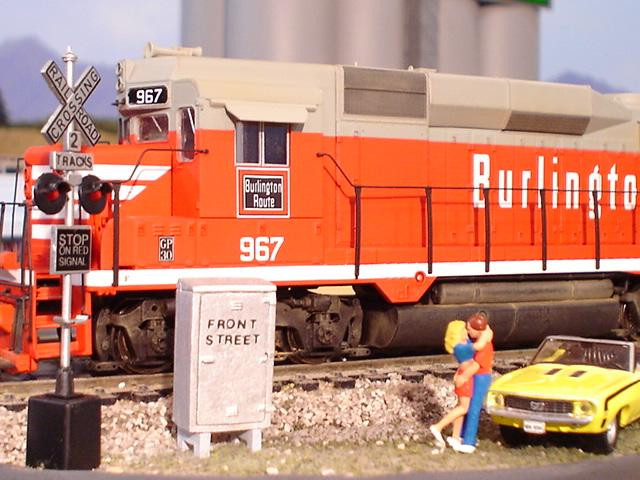 Hi all. Just a few of the later pics since this is our main online showcase.

I don't care if the alarm went off. I keep telling you guys, I'm the night manager! 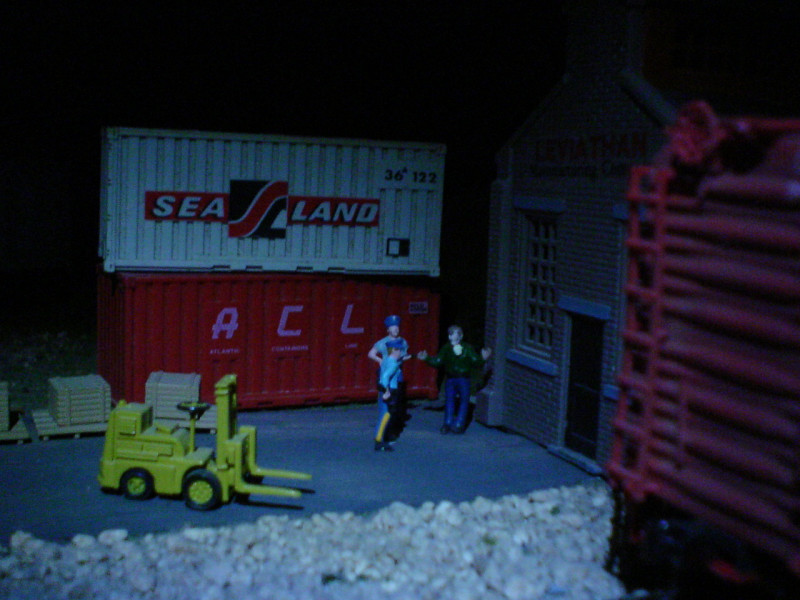 Hobo camp under a full moon. 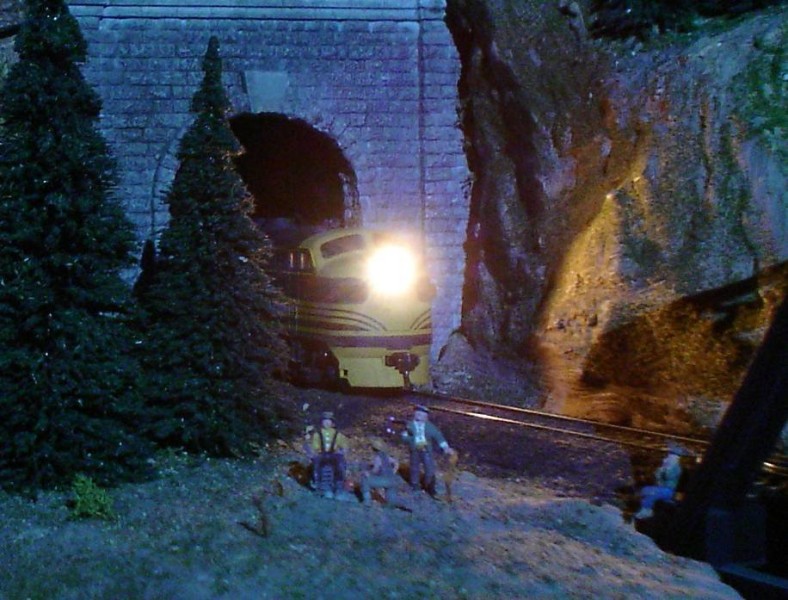 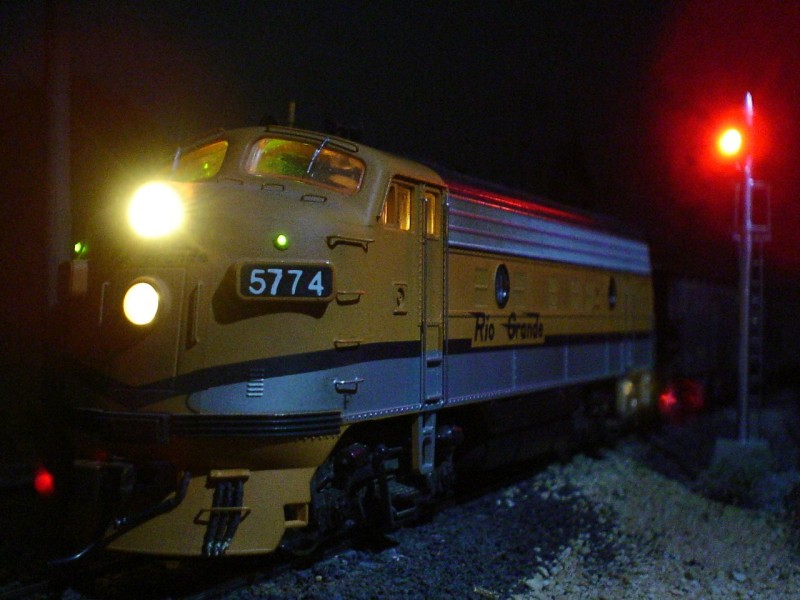 Seriously Jim, get in the taxi and show up sober tomorrow! (thanks Rex ) 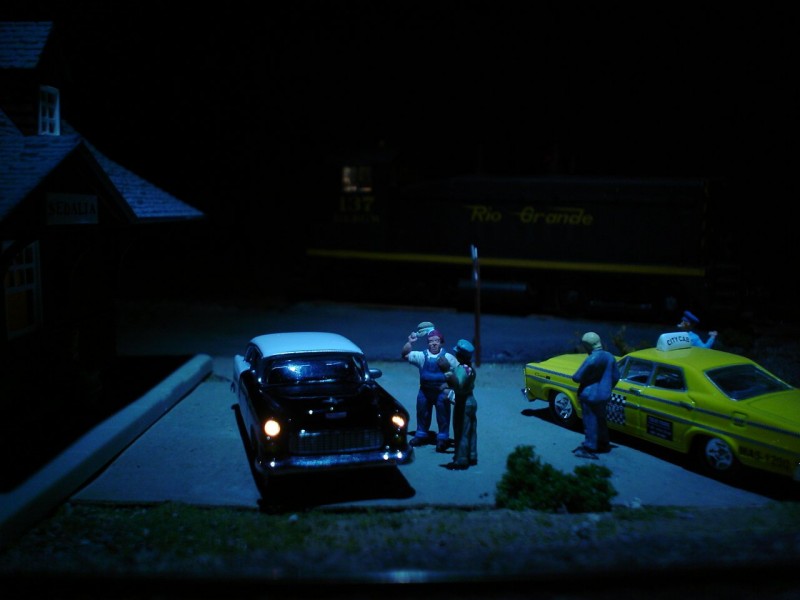 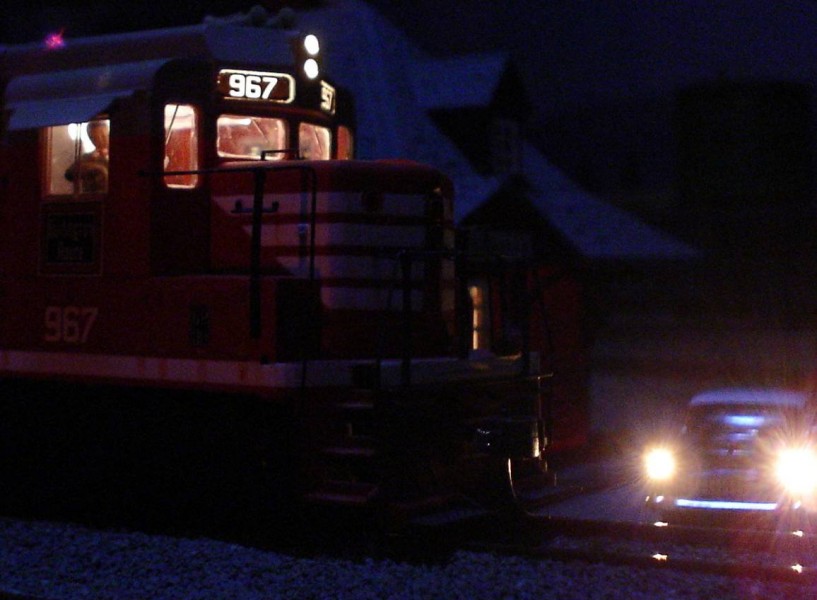 Thanks for the Welcome, Grande Man Eric!
Your layout phtos are wonderful!
Blessings!
p

Moonlight at mine #4 ROCKS!!(pun intended). Lovin' those nightshots Grande!!!

Yes. What do you use for lighting?

dingoix said:
Yes. What do you use for lighting?
Click to expand...

Thanks for the comments, guys. We're having fun with it!

As for the night shots lighting, check out page 4 of this post...
http://www.modelrailroadforums.com/forum/showthread.php?t=4104
S

Put down my Brass!!!

Very impressive. I do Like it. Ummm, can I come over with my own stuff?

thats cool I cant weight too see it!

Thanks guys, for the comments. I just noticed that the hit count on this thread is up to almost 6100 views! Thanks to everyone who's shown an interest in our railroad.

Jeremy, maybe you and Ray can come over sometime after Christmas. Keep in mind, this is a much smaller layout than the other two you've seen so far...

You won't be dissapointed Gent's,

Steve B said:
You won't be dissapointed Gent's,
Click to expand...

Thanks for the recommendation Steve.

Since this is our online layout showcase, here are a few pics from other threads that I thought would be good to have posted here. It's been quite a while since the last update.

Running light in the mine district.

Hurry up and Wait.

True love is getting your number boards wiped down...

You have one amazing railroad, engines, rollingstock and scenery!!!

I also don't think I need to mention you excellent job at taking pictures!

Really a pleasure to look at and read about.

You have one amazing railroad, engines, rollingstock and scenery!!!

I also don't think I need to mention you excellent job at taking pictures!

Really a pleasure to look at and read about.
Click to expand...

Thanks so much, Ken. We have really enjoyed building and operating the layout. LGM and I have spent countless hours hanging out and having fun. We hope to spend many more doing more of the same. A lot of the fun has also been sharing the experience with all our online friends and enjoying their layouts as well. This truely is the world's greatest hobby!

We currently have plans to reshoot many of the layout photos with our new cameras. Hopefully, we can improve on the "tour" some with them.

Wow your layout is awesome! I went thru the slideshow fast because I'm at work, but when I get home, I'm going to go thru them more slowly. It sure is something to aspire to!

PlebianAngel said:
Wow your layout is awesome! I went thru the slideshow fast because I'm at work, but when I get home, I'm going to go thru them more slowly. It sure is something to aspire to!
Click to expand...

Thanks for the comments on the layout.

Ours is actually a fairly modest model railroad compared to many of the larger layouts and something similar is well within your reach with a little time, money and experience (ok, actually a good bit of time and money ) As Kalmbach says, dream it, plan it, build it. And I'd add, have fun with it!

Anything new in the works here GM?
U

Eric, I'm glad this thread was bought up again since I didn't see it previously. What can I say - beautiful layout and skillful modeling. Maybe, if I'm lucky, I'll get to see it in person one day.

Alco, there's not much new on the PCS. We've done some weathering of rolling stock, loco detailing and a bit of train running lately. There is a good bit of detail work left to do. LGM and I have been getting into a modeling mode again as of late, so you never know, we may tackle some of that soon. We also have one "realignment" upgrade in mind (in keeping with the prototype ).

Jim, thanks for the comments. Maybe we could have you over for a little western RR action some time. It's a small layout but can be operated by three.

Though this was originally done for a separated thread, I thought it would be a good update here... Mine Run on the D&RGW!

Ya'll come along on a flashback to 1965 and railfan D&RGW train 171, an extra coal drag running between Colorado Fuel and Iron Company's Split Rock Mine #4 and the Cherokee Station electrical generation plant north of Denver. Even though its early October and cold weather is still a way off, coal requirements at the plant are up today due to reported interuptions in supply at another local plant. The Cherokee Station manager has requested extra fuel to be handled by the railroad.

The eastern sky is beginning to brighten as the engineer of extra 171 waves to night shift miners as they prepare for shift change. Our power today is two of the Grande's most modern. At less than a year old, GP35 #3047 is on point. GP30 #3002 trails. It was built three years ago and its type is already well liked by the railroad. The 30 is destined to become a motive power mainstay on the mountain railroad. We have time to run to the diner for a quick breakfast as 171s forty-nine carloads of coal begin loading.

It's almost 9:15 before extra 171 begins it's trek east toward the Joint Line. We'll catch a quick glimpse of the train at Mine #1 before we have to get moving again to shoot more photos down the line. The brakeman is overheard on the radio telling the conductor to wave at the "guys with the cameras" when he passes by. We may be back on the road before he does! Hopefully our quick shot from the trestle won't give future generations of railfans a bad rap...

It's been a hustle on the mountain backroads but we're ahead of the train as it arrives at South Platte Junction. Geez, I wonder what the brakeman is thinking now. He's awfully quiet. He's probably wondering how many traffic laws we broke to get here!

We're a bit late getting to the siding at Rocky Top, but the restroom break was mandatory! Still, a shot of the tail end of 171 is possible as it passes a MOW train led by SD7 #5304. The conductor of extra 171 appears to be enjoying the fresh mountain air.

D&RGW 3047 as seen from a Colorado and Southern F3 cab. Fortunately for us, the crew invited us aboard for a look around. A shot of D&RGW extra 171 from the cab was to cool to pass up.

My, look at the time, it's past lunch! After a few more exposures of our favorite coal train passing thru town, we may as well get lunch here in the booming metropolis of Sedalia.

Since we've been running late most of this trip I guess it shouldn't be much of a surprise that we bailed out of the truck just in time to see extra 171 rolling into the the complex of unit 3 at Cherokee Station. It's nearly 2:30, the time we spent talking with that nice state trooper almost cost us the shot of the day!

As ya'll may have guessed, I've been playing with my new Canon 40D camera and its live view function. Camera angles that were tough to capture in the past are now possible. Of course, all the benefits of the SLR type camera are still available from those camera angles. I hope ya'll enjoyed our railfanning trip chasing D&RGW extra 171.
Last edited by a moderator: Jul 4, 2008
You must log in or register to reply here.
Share:
Facebook Twitter Reddit Pinterest Tumblr WhatsApp Email Share Link