Scratch that, it rained monday night/tuesday early moring. I think I jynxed it!
Josh

Yeah. Yikes! I thought I was back in Minnesota!!! Boom! Crash! Bam! We started counting seconds between flash and crash until they began coming simultaneously. That's when I was ready to crawl UNDER the bed.

Staff member
Yuh! did'n have tuh send it up here did ja!

Sheesh, I slept though the storm, I guess it was all those booms & bangs in Iraq. I just saw the prequil before i went to sleep...

Its been nothing but sunshine and light drizzle here. Almost wanted to go to the beach

This is the longest lived wpf in forum history... If it keeps going I'll just change the date this Friday. BTW, it's sunny and warm here.

How bout we change it to "This WEEKS Photo Fun," its already Wednesday and were still going!

Staff member
Sound's good to me Seth, How about it Grande Man?

It's already been shortened to WPF. So who's to say it doesn't mean Weekly Photo Fun?

CBCNSfan said:
Sound's good to me Seth, How about it Grande Man?
Click to expand...

Ok by me, Willis.

Since it's Friday anyway, instead of kicking off early, let's just keep them coming...

OK everyone, it's officially the weekend again. Since this thread carried all the way thru the week, let's post some pics for the weekend!

GP7 Helpers prepare for their trip down the mountain. 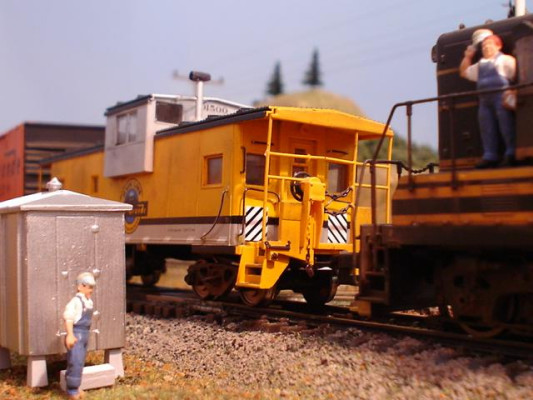 The same pair at Mine 4. 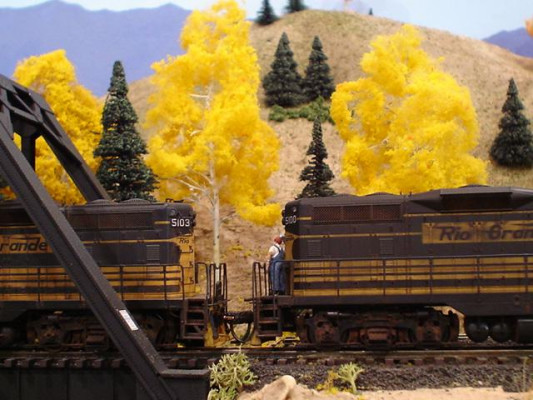 I'm having some computer issues, so that's all for now.

Well, as usual I have no pictures... But I'll be making a purchase this weekend which will give me something to take photos of. I'll be picking up a couple Athearn blue box flats, 2 GHQ log loaders, and another package of Details West log bunks. I'm contemplating on buying an Atlas GP7 and associated detail parts. I'm burning my wallet out so fast...

NWR #200 said:
Well, as usual I have no pictures... But I'll be making a purchase this weekend which will give me something to take photos of. I'll be picking up a couple Athearn blue box flats, 2 GHQ log loaders, and another package of Details West log bunks. I'm contemplating on buying an Atlas GP7 and associated detail parts. I'm burning my wallet out so fast...
Click to expand...

I'd like to be the first here to highly encourage you to go forth and buy more trains. Do it for the children...

I've attached a picture of my latest project.

I've been able to do nothing but watch everyone's efforts here. I've had to move, so everything is packed away for that bright day in the future.
I would like to get the Roundhouse Model 40 diesel switcher. It's cute and fits what I will be doing someday. I got to see one run at a nearby hobby shop.

Dirty Geep from playing follow-the-leader in helper service. Anyone got any Windex? 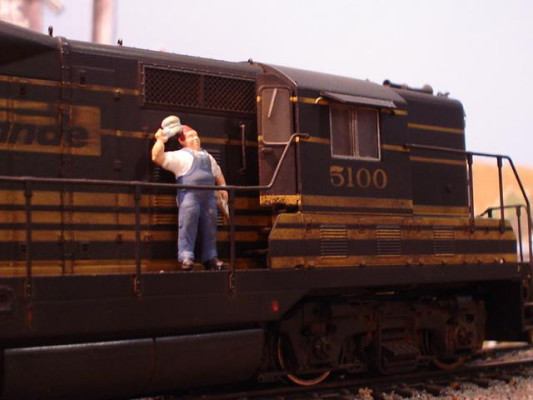 Couldn't get down to the bacement because of too much work to do last week, but this week I stayed on campus from 8 'till 9, thus earning myself a free weekend.

It always amazes me, how many people complain about having to do assignments and stuff on the weekend, instead of going out and getting drunk.

It's much better to do work on the weekdays and then have the weekend for whatever you want do, HO in my case.

Putting up scenery I found my old roadbridge from my first matchbox set I got in the mid 90s. It's one of those road bridges that's the same as a RR bridge. So I started thinking how it'd be nice to use it on the layout, going second deck...
As a result I took down about 1/3 of the trackage and re-layed it. This time its for good, I think.

#1 This is the mainline with a small yard. The red tracks are the locomotive depo (insulated) and the white track is going to be elevated to the second floor over industrial trackage. Bridge installment is my next big project.
#2 With the tracks re-layed, I started testing them with my Geep. The two foreground tracks are for the future train station platform.
#3 Got to love flywheels! The Geep got pretty far behind the insulators in the depo, with no power, before it stopped. I was running at "2speed". Not sure how much that is, but trains tilted over when I ran at 4speed on my old oval.

PS. How do you like the new bunny logo? Better then the old boxcar copyright IMHO.

LGM staging trains for an operating session. His quick draw with that DT300 is impressive. 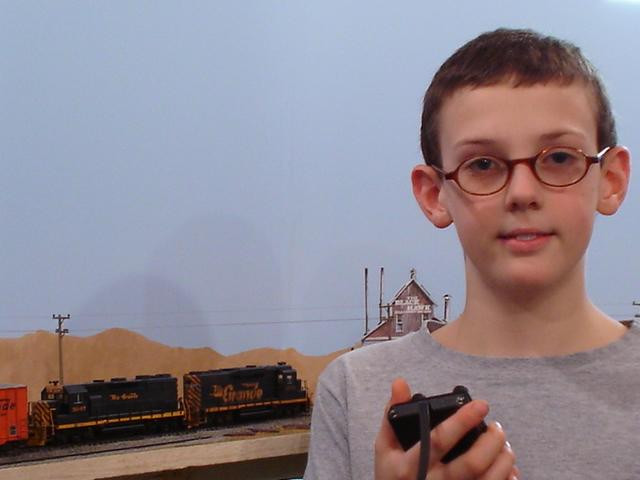 #137 outside Sedalia, Colo. We gotta do a little work on that crossing!!!

Nice work Roman. Keep us posted on your progress.

Thanks. I spent a lot of hours down there today (it's a completely different world), but my camera's batteries died (I need to find new ones), so no pics for now.

I've installed the ramp for the second deck, made out of Lego's and put the tracks on it and over the bridge. Suprisingly it worked out ok, exept for two major problems:
1. Cars came off the ramp at dangerously derailing speeds and right into a curve
2. Engines refused to go uphill onto the ramp.

So I tore the bridge/ramp down and now needed to rebuild my layout again.
I've been thinking a lot about my layout and realizied that when I planned it on paper, I focussed on industrial switching too much, and not the actual operations. So I tore 90% of it down, moved the rest around a bit and now have myself a "brand new" layout. Some of its highlughts:
- The depo's tracks are the same as before, exept now they connect to an actual yard.
- The yard is 4slidings wide by about 5 feet. Before it was... See the middle photo in my previous post. That was the "yard".
- A 6feet long sliding along the mainline, allowing for trains to be stored there. I think I doubled my overall "train storage" capacity on the layout, before they either had to block the industries or the mainline, now they can rest in 3 comfortable long slidings.
- The mainline looks doubletracked now, thanks to the mentioned slidings. Before it was just "another track".
- The passenger station is drive-throw now, a sliding from the mainline basically, just like the real pass. stations.
- The yard allows for pretty good switching manuvers and has a special short spur for 2 Geep switchers and a caboose.
- I now have less industries, but at least I can now make pick-ups from them, take the cars to the yard, then onto a mainline freight. Much more realistic that way. One industry is larger then the others, it has 2 parrallel spurs, making it look much more realistic then the short 2-3 car spurs I had going off of the mainline before
- No more spurs off the mainline that allowed trains to fly off the table. They're simply gone now.
- More flat space to put in buildings and the Lego subway, before it was too crowded.

I know that seems confusing, but once I get the camera going, I'll climb up on a chair and take an aerial shot of the whole thing.
To make the explanation easy, before I had the layout physcially ecided into two 4x4 squares, one of which had the industrial switching, with the other one having a yard, depot and pass. station. While the industries were dominating, the yards didn't like their lack of space.
So the yard occupies one hald of the table (2x8 roughly) with everything else on the otherside. Now I can use the tables 8foot length for a long and more realistic station.

Final note, my IHC BN C-Liner is working much better now then it was even a month ago for some reason. Before it went forward ok and refused to go backwords. Now it goes forward pretty good and does a fine job pushing cars going backwards. It restored my faith in IHC.