Time for me to show off!

Held a very informal New Year's party at North Metro club, which also included me moving in most of my collection. I took over Northtown yard for a few hours.

MILWAUKEE ASSEMBLE! This is the vast majority of my motive power, missing about seven. Three locos were lashed up to a grain train down in staging, and four more were still at home. Not bad for a year of collecting, eh? I'm nearing 40 MILW locos, and about 52 total now.

We also had a major shakeup in our club ops pool, which meant tons of holes needing cars, so I rushed as many of my cars to the club as were needed. I documented part of this in a recent YouTube video: 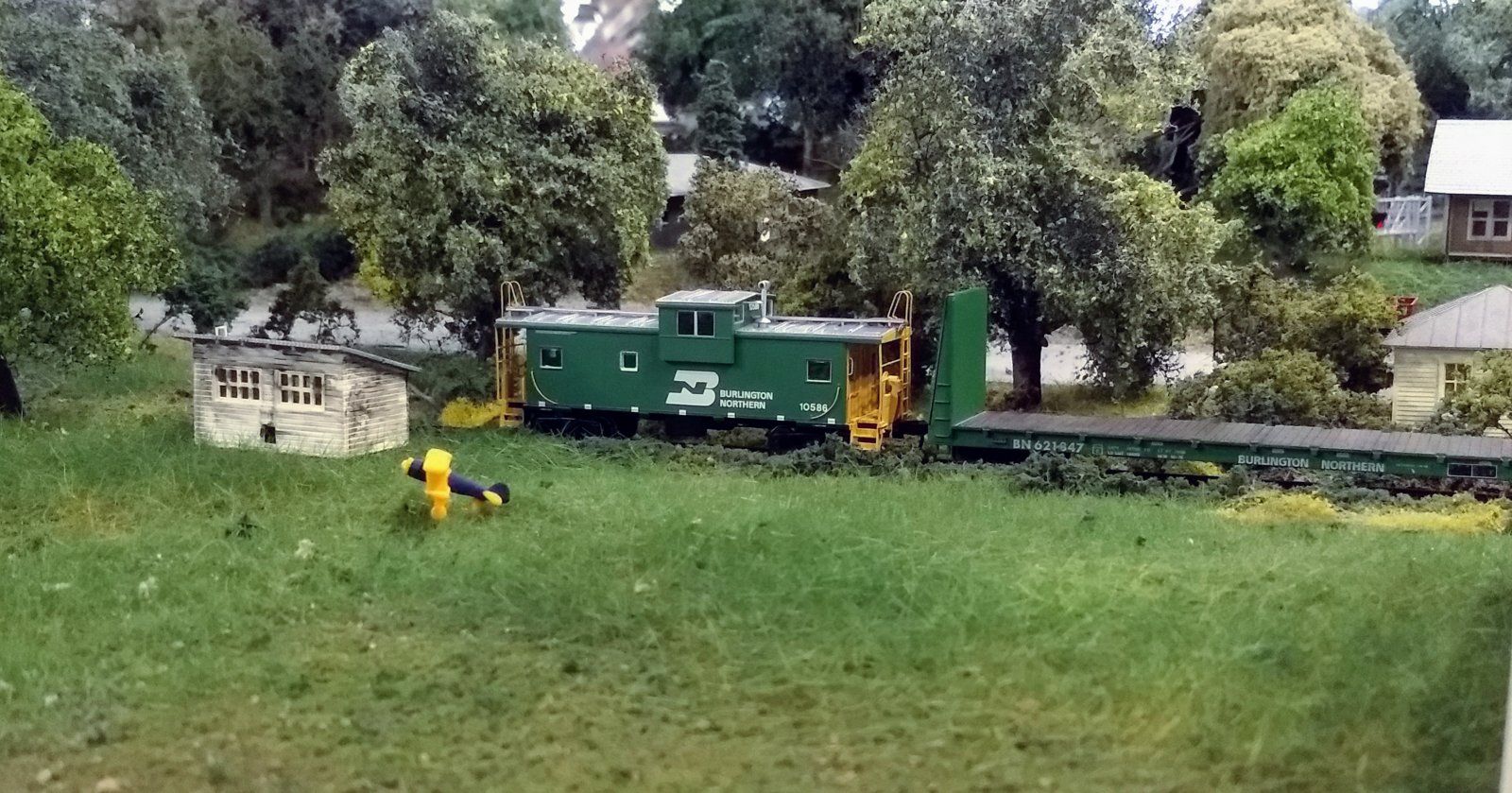 Staff member
VERY, VERY Nicely Done. That is quite a beautiful layout!

Back for my "few months" check in. I've been a busy guy.

First off, I've begun something of an arms race within North Metro for making open car loads. Myself and our Ops manager are competing with eachother to see who can make the coolest and most practical loads for gondolas and flats. A few of mine are purchased, but I have been scratch-building or bashing many of my own. Most importantly, all the loads can be moved to other cars, allowing our ops pool to be diverse and varied. No loads are on the same car twice in a week, which is very good for our realism. 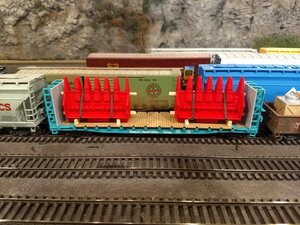 I got us two pair of these combine corn header sets. Both were new old-stock from Ertl and Life-Like. The Ertl ones come glued to a flatcar deck, but otherwise both sets come glued to a big crate between the headers. I separated them, sprayed them with a Model Master gloss red, then dullcoted them and mounted them to craft sticks with E-6000 glue and art tape. I'm very proud of how these turned out and I want to do two more pair in J.D. Green. 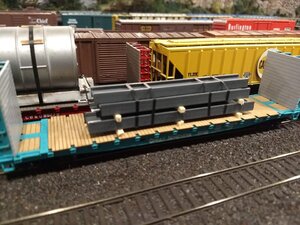 This large I-beam load was made with scrap Plastruct bridge beams we had laying around or riding in gondolas as ad-hoc loads. I cleaned them up, painted them, then mounted them. Looking much better this way. 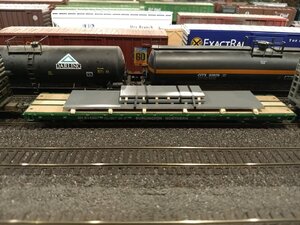 Steel plate load made of Evergreen sheet styrene we had laying around. Easy to make. 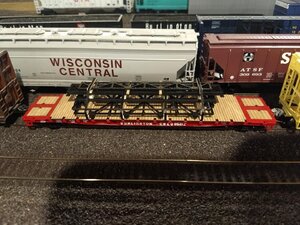 This, I believe, is a Bachmann signal bridge kit I found in our scrapyard. I took it apart, cleaned it up, and turned it into this bundled load. 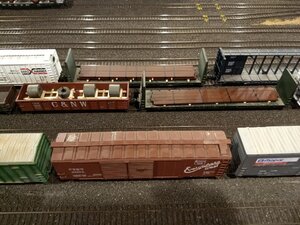 Steel beam loads on flats made form Evergreen styrene strip. These are another easy load to knock out several in a day. Also one of my coil loads. Three plastic Walther's coils, and one random pewter one we had. 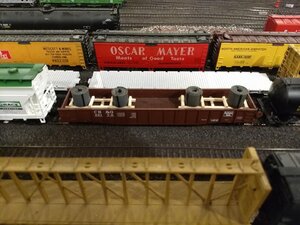 This coil load I actually made from scratch following a project in an old Model Railroader. Mine aren't as neat as the ones in the article but they look the part. I had to brain out my own cribbing so they could be removeable. We have a couple of gondola rails for holding coil loads which I will use next time. 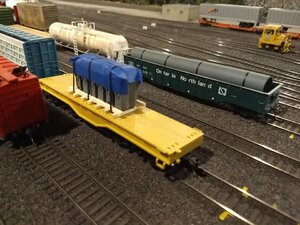 A very imaginative transformer load I made from an old electrical junction block I found in the trash at work, next to a piece of electrical conduit turned into a big ol' pipe load. The pipe is resting on craft stick cribbing.

I'm also happy to say my collection has been refined and grown a little bit. I've sold off most of my forever projects and less-than-stellar locomotives. Also acquired a few new things, like these gorgeous SDP45's. 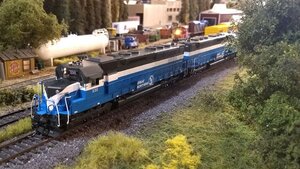 I also snapped up a very-loved Blue Box U33c, which I originally mistook for an Atlas. It runs well and looks pretty sweet, so I'd hate to sell it. Also goes well with my NP SD45 I traded for. 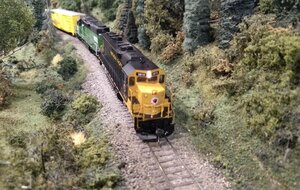 And because I keep forgetting which end of the Milwaukee I like, I got a pair of Proto-2000 SD45's at decent price! One of these has a Soundbug decoder, which I normally don't like. This one is actually pretty good and I'm not inclined to change it yet. See them in action with my "Ford Fast" style auto train. 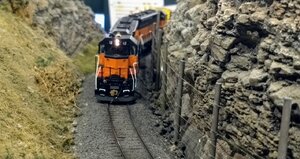 I also acquired my first ever brass model, a Milwaukee Road 4-6-4 Baltic (Not a Hudson on the MILW!). Built in Japan, IIRC. I believe someone told me it's from the 1980's. Either way I'm happy with it. The drive is okay but clearly needs to be serviced by someone who knows how. I'm intending to reach out to a local expert for that, as well as a sound install. Paint work is something I can handle myself, since this thing already has paint on it.

And last, but not least, I got cracking on assembling an Arrowhead train. This little Amtrak shorty ran from Minneapolis to Superior, WI, and then later to Duluth. The service lasted about a decade and was eventually shut down. It would have been quite a scenic ride, back in the day. Every photo I find of it shows the consist had atleast one dome car, but usually both a Full- or Super-dome and a Vistadome. I opted to have two domes for interest. This train also doubles as a 1977 Amtrak Steam Special for my AFT #4449. 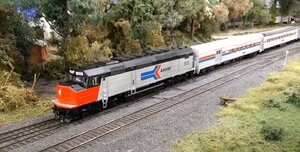 I've tailored my Arrowhead specifically for the North Metro club, as our layout is Minneapolis (Northtown yard) to Duluth. It's meant to be part of our Ops pool, and as a go-to easy train to run for our open houses.
Last edited: Jun 22, 2020

Staff member
You a hard man to keep up with the way you purchase, swap, and trade around!
All the equipment looks great - per Willie's comment, "The loads look great"!

I love some of the loads on your flat cars in the video!! Was one of them formerly a motorcycle fuel valve? That's great.

Sirfoldalot said:
You a hard man to keep up with the way you purchase, swap, and trade around!
Click to expand...

It's hard to not. My goal is to have at least a pair of all the 1970's diesels MILW had. I could have gone without the brass but I love the MILW's 4-6-4's, the price was good and it already had paint. As far as the other things, like my SDP45's, a fellow North Metro member was selling those as a pair for $150/ea. Hard to pass up Genesis locos for that price, especially when one has sound. Big Sky Blue is such a beautiful paint scheme, and I have a budding early BN collection, so those were very hard to resist, and they look really cool at the head of a colorful '70's grainer.

Collecting this stuff is like a drug, made even worse when you have friends who sell it cheap, and they know who has the weakness for Milwaukee. I hate to admit, model railroading has been a hell of a lot more fun since I started representing the MILW as it was 50 years ago.


KB02 said:
I love some of the loads on your flat cars in the video!! Was one of them formerly a motorcycle fuel valve? That's great.
Click to expand...

I couldn't tell you, honestly. The loads in that video (Except for the metal plate/sheet load) are ones I did for North Metro club out of materials North Metro provided me. I think the ones you're referring to were some kind of valve or part of a pump, yes. I'm just glad to say my loads have been a landmark positive for us, as now we have dynamic loads that can be changed out and are not just random debris thrown into a gondola.
Last edited: Jun 22, 2020

Dakota: Great scenery and loads on the club's layout. I'm a MILW nut and have maybe 50 MILW locomotives.

I am old enough to remember the last days of steam on the MILW as well as the SOO and C&NW and saw lots of action living in and near Milwaukee. I grew up within walking distance of the former MILW, SOO, C&NW and some trackage rights for foreign roads. I'm still within 2 miles of of where I grew up and my home is less than a half mile away from the former MILW Bug Line, the line from northwest Milwaukee to Merton, Wisconsin.

Now I hear the CN and UP from my home and if lucky sometimes the CP. 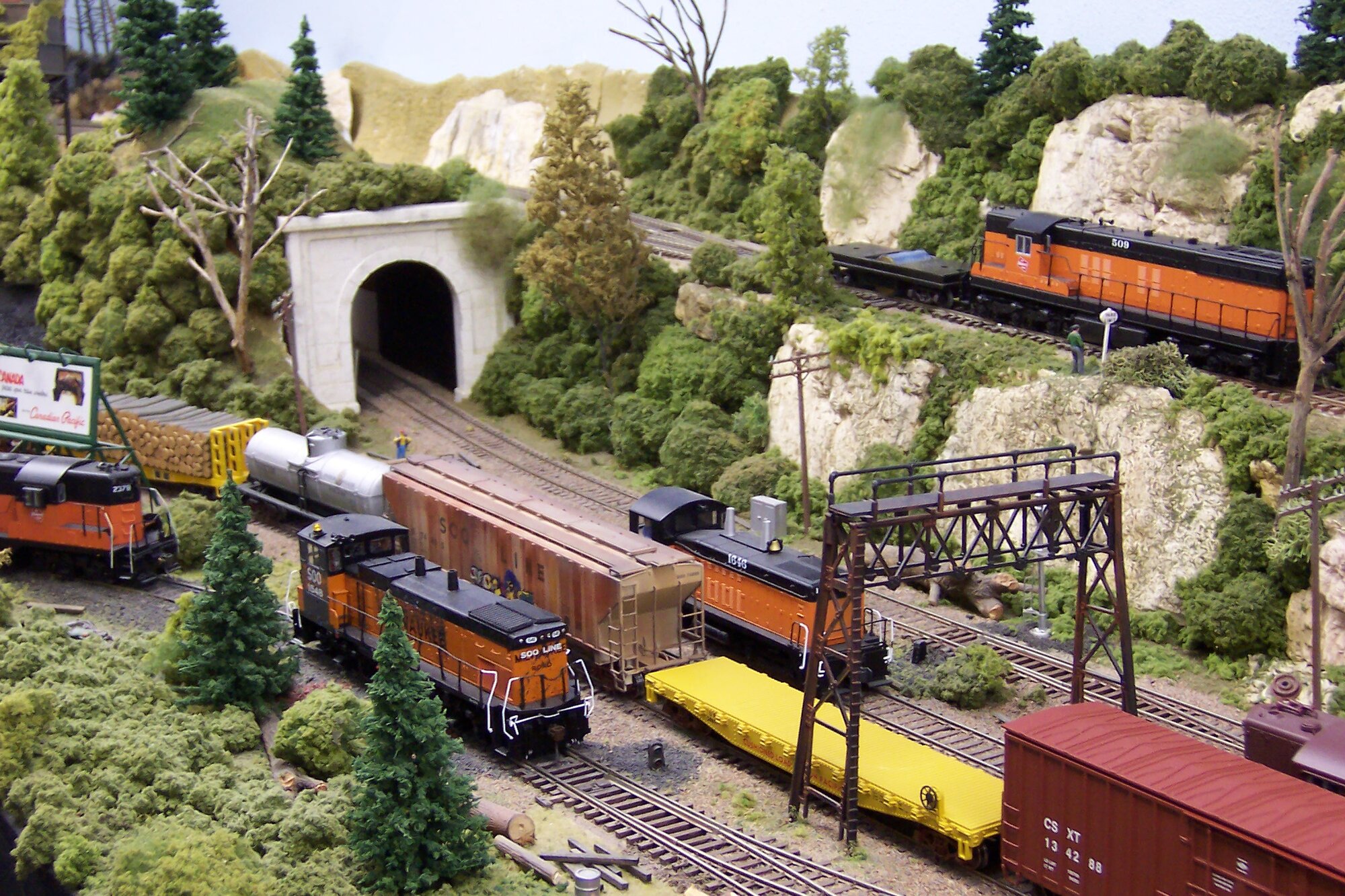