The Uffington and Davis Railroad (The Uff Da Line)

Been a busy week, but hereby submitted two track plan ideas. I would appreciate your review comments and suggestions.

2. North is 'up.' Entire north edge is against a wall; entire west and south edge is free; most of the east edge is free, except the "Ell" that runs full into an alcove formed by a closet. The walls are shown by the heavy red lines, except on the north edge. Dimensions shown in the image "TwiceAround."

3. I am former Navy officer, so entered this hobby with the idea of a port scene. I am now coming to realize that I might be pushing too hard, but attached is best design to date. I am a bit concerned that bascule bridge would be so heavy that it would visually overpower the layout. Also a bit concerned that my novice sills could get it installed so as to provide trouble-free operation. Plus, the 'main' would have to cross the bridge each loop. I do have a line on the ship (coasting steamer) and pier (Frenchriver? IIRC) and they are drawn to scale. But just can't devote much space of the 4x8 to the port, making it look significantly out of proportion. Open for suggestions.

4. So I switched in my head to a modified Twice Around, which is the other image. Op plan would be for road freights to leave the yard head first and take the outter loop (22 inch R), then inner loop (18 inch R), then drop cars for the industries, and then take the reversing loop back to the yard head first. I have one steam road loco, and two diesel switchers in hand with a Plymouth on pre-order.

5. I don't really ***need*** the second reversing loop, but want to serve the industries both north and south of the primary reversing loop track, and just kinda worked out that way. But open to suggestions.

6. The southern loop/s extend 'off-table' by a max of 4 inches. This edge abuts my living room TV area and I foresee this as the premier rail-fan vista. I will make those extensions with hardboard and foam with some guardrails to keep the vertical drops to a minimum. I'm also thinking some clear plexiglass 'guard' along the entire west edge, which is a pretty tight aisleway.

7. Benchwork is all built and is 1/4 or 1/2 plywood topped by 1 inch foam, the good stuff. Joint is shown on the Twice around. Ideally, I ought to build/wire it so that I could potentially take down the 4x8, which is on bolted legs. The "ell" is attached to the wall, not the floor.

8. Goal is to operate turnouts by both DCC accessory decoders (looking at Cobalt or Walthers) and pushbuttons. Current idea is to install a 12" wide hardboard fascia and mount switch controls locally instead of a master control panel. I would definitely appreciate advice here.


Right now, I am leaning toward the twice around layout. There is more, but please ask questions. I look forward to your constructive criticism. Thanks in advance!

One other thing occurs to me , if you use code 70 , you need to make sure the engine and cars meet NMRA wheel specs , no pizza cutter flanges.
Last edited: May 10, 2021

Personally, it is similar to what I have started, I love the plan !

I'd take the first plan myself, looks like a good one to play around with.

Rico said:
I'd take the first plan myself, looks like a good one to play around with.
Click to expand...

Help me to be clear: with the harbor or without the harbor?

Harbour, but like some have said, reach distance could be an issue moving forward.
K

I really like the port variant. My only suggestion is to reduce the amount of trackage a bit. The layout will be a lot easier to build but it will still be a lot of fun to operate. One idea is to get rid of the three sidings inside the oval.

kleiner said:
One idea is to get rid of the three sidings inside the oval.
Click to expand...

That would certainly reduce the opportunities for switching!

Getting pretty close, I think. I decided against the harbour scene. Too worried about the bascule bridge and the too-small space for a true waterfront scene. Maybe I'll make that part of the shelf RR to be built if ever this one gets complete!

1. TT where it was was problematic. So moved it clear of the wall. Makes it easier to cut the hole and install, and hopefully downline maintenance.

2. Made some adjustments to the approach tracks to the TT.

3. Was worried about the TWO reversing loops, but saw a Tam Valley Hex juicer, which will power either six frogs OR 2 reversing loops. Sounds like the ticket for me!

4. Other than that, I think I am about ready to start cutting holes and putting down roadbed. I am using Woodland Scenics sheet foam roadbed for the yard area. Seems that prototype yards are often fully ballasted level, with no elevated roadbeds. So that's my plan.

As always, suggestions and critique most welcome! 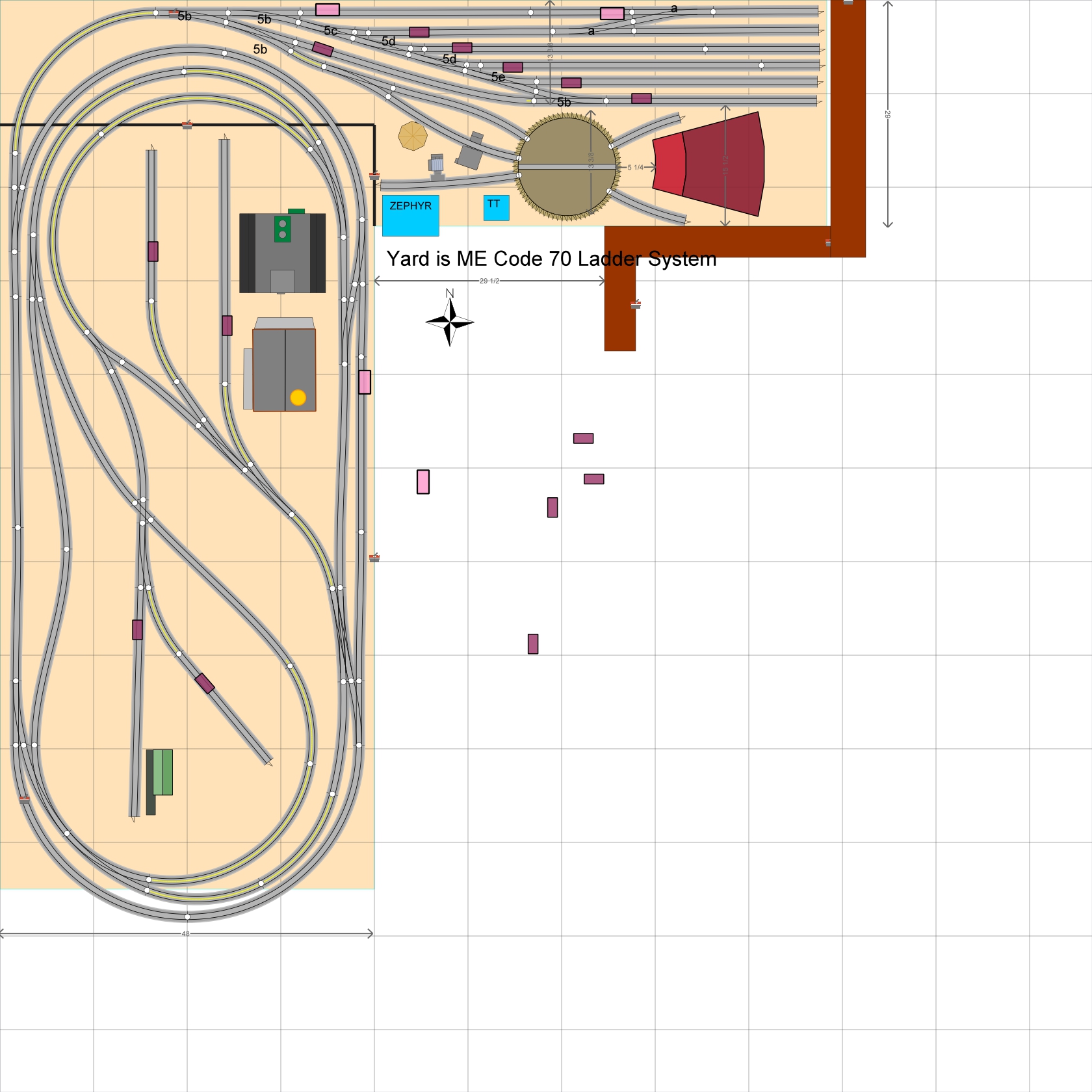 I am hoping for some more feedback. So those of you lurking - this is your chance to help my line be a better railroad! Thanks!!

1. I am deciding that the northern reversing loop is redundant and that there might be a better/easier way to serve the southern spurs. So I deleted that turn and loop.

2. The southern industry spurs have a wye turnout because I already have it in hand and want to use it!

3. I have installed the turntable, so the yard design is pretty much fixed.

4. I have a Walthers/Shinohara #6-1/2 LH Curved Turnout in hand that I am not currently incorporating. Any ideas on how I could bring it back into the design? Wasn't cheap!

5. The yard ladder is ME Code 70 ladder system. The rest of the lines are Code 83 ME Flex. The curved turnouts are Walthers/Shin #6-1/2; all other turnouts, including the double slip, are Peco insulfrog/unifrog. 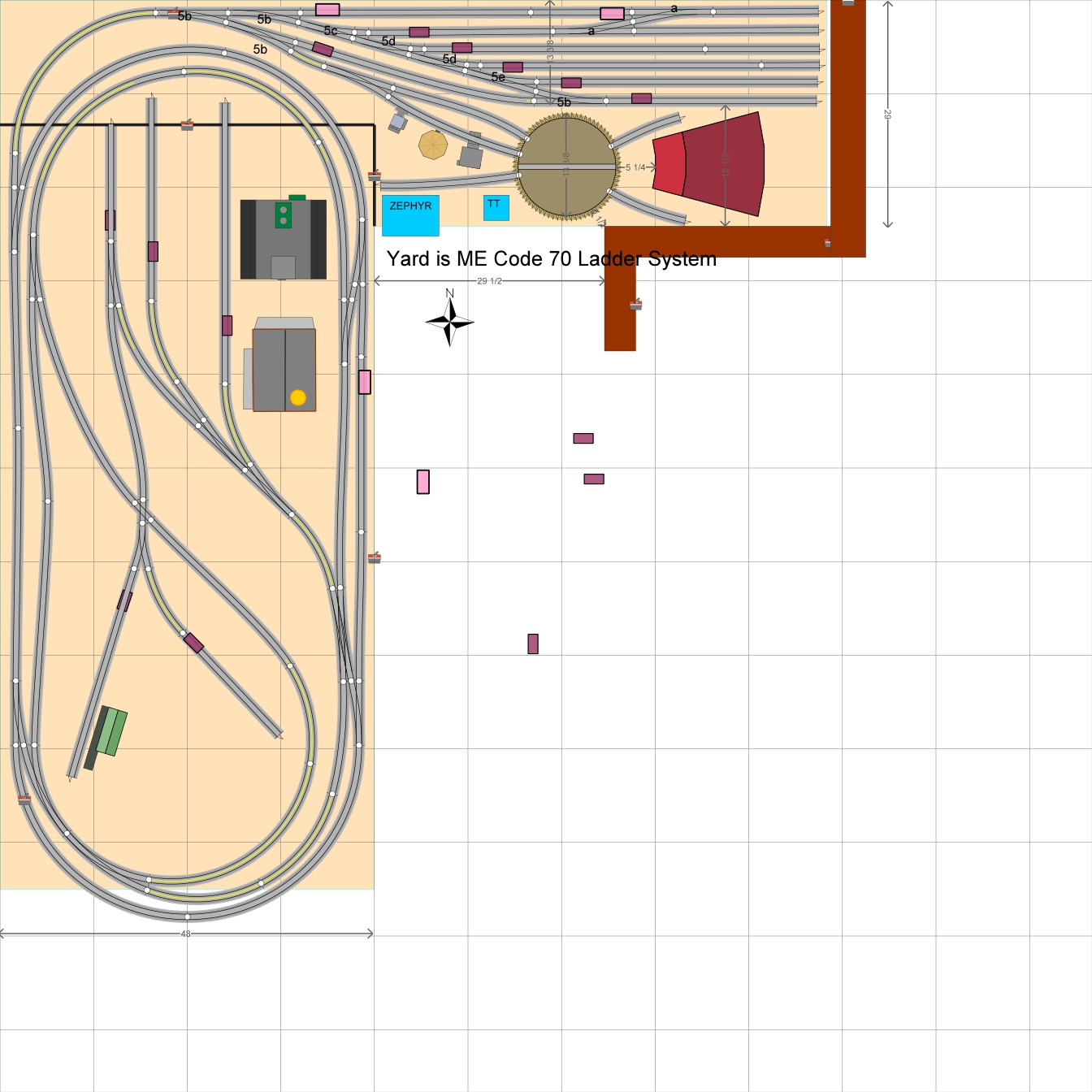 Gentlemen, I submit for your approval:

This afternoon I glued down the first permanent tracks of the layout. I checked and double checked and then checked some more. Adjusted, fiddled, filed, and then put my lightest rolling car on the TT to check.


I know you old vets are laughing at me, but I am excited. I glued the roundhouse down with Elmers and then used clear latex caulk to glue down the tracks.

Man, I sure hope I don't have to pull it all up!

I'll let the caulk dry overnight and then start wiring feeders to the tracks. I plan to wire them through toggle switches in the fascia so that I can control power to the RH bay tracks. And I'll probably have to solder those rail joiners connecting the RH bay rails to the approach tracks. Does it ever end?

Looks good but I think the switchback that feeds the two bottom stub tracks should be just a tad longer.
Know what I mean Vern? (obscure reference)
S

MilwRoader_Steve said:
This afternoon I glued down the first permanent tracks of the layout. I checked and double checked and then checked some more. Adjusted, fiddled, filed, and then put my lightest rolling car on the TT to check.
Click to expand...

Great layout in sight ! Can you reach every place on your layout without any problem?

Raboliot said:
Great layout in sight ! Can you reach every place on your layout without any problem?
Click to expand...

That back corner has been identified as a 'problem' reach. Some say it is THE biggest goof-up in the history of model RR-ing; some say, "No Biggie." I do have a good solid step ladder and it's not too bad. Worst comes to worst I can always rip up the yard ladders going back there and replace with a structure.

I like plan 2, however some sort of port is always interesting to me(and I worked for the Army for over 20 years).

I wonder if you could make the loops a bit shorter, and add a pier/dock at the bottom(south) end of the plan. You might just have the side of the dock, with some sort of cranes for loading unloading, maybe a very narrow, but tall warehouse for 'storage,' and a 'gate' to the facility. maybe a sliding the length of the pier on either side of the warehouse. I'm thinking the warehouse is some scratchbuilt structure, along the lines of the warehouse in Baltimore, near the baseball stadium.

I don't suppose there's any chance of any shelf off the bottom portion of the layout, that could be the port/dock? It could be a dock rr, with an interchange, if that's not politically too much to ask.

MilwRoader_Steve said:
As always, suggestions and critique most welcome!
Click to expand...

Late to the party, but that looks fantastic for the space. I've always contended that the out and back design is the most flexible for massive amount of operation in a small space. And double track main to boot.