GarryCBQ said:
Beady .... I am sorry to hear about your mother passing away. I know what you mean about seeing people with extreme old age. I always thought I wanted to live to be over 100, but after being with people in their 90's in nursing homes I no longer feel the same about that. Thanks for sharing your beliefs about death. Briefly, I will say I know there is something waiting for us when our bodies die. I base that on near death experiences I had when my heart stopped beating because of my heart condition. I had those experiences two times out of the six times my heart stopped. It really happened. That is all I want to say about that. Thanks for being willing to accept prayers from believers. Condolences and prayers for you and your family.
Click to expand...

Near death - I'm skeptical, but won't argue. The essential problem is that it's unverifiable. That's one of the problems I have with gods, too.

kjd said:
It looks like a diorama to me, even the car in the background has fat model wheels.
Click to expand...

It could well be. But the details on the rails, and the coloration are spot on. There's none of the big clips you usually see holding model rails in place. Whoever built that did a hell of a good job.

You're right though, the wheels were a give-away. The paint seems just a touch to thorough and perfect too though.

Did some inside chores, went to the P.O. then picked up 1/2 cubic yard of topsoil. After getting home I backfilled the retention wall on top of the rocks. I consider the project complete now. I called B.T.S. to verify they were still in operation and that the mine kit was in stock, it was, so I ordered it.

Joe- The Pennsy had a prototype for everything.

Ken- Prayers for your wife and family. Nice weathering job.

Willie- Nice job on the building.

Sherrel- I have "O" rings for the roof solar that are square. It makes sense about the extreme clustering in big cities due to human density and living conditions. I'm sure the huge homeless numbers will not help in CA's case. If the feds aren't careful all the medical supplies can be sucked up by the large cities with nothing for the rest of the country.

bob said:
That photo is screwing with my brain. They Photoshopped the model over the real thing, didn't they? Something's just not quite right about that.
Click to expand...

While that particular photo is staged by ScaleTrains, it is representative of some cars that I have been seeing recently on the UP tracks coming thru Denton TX on the way to Ft Worth.
Here's one from Thomas Stebley at RailcarPhotos.com. 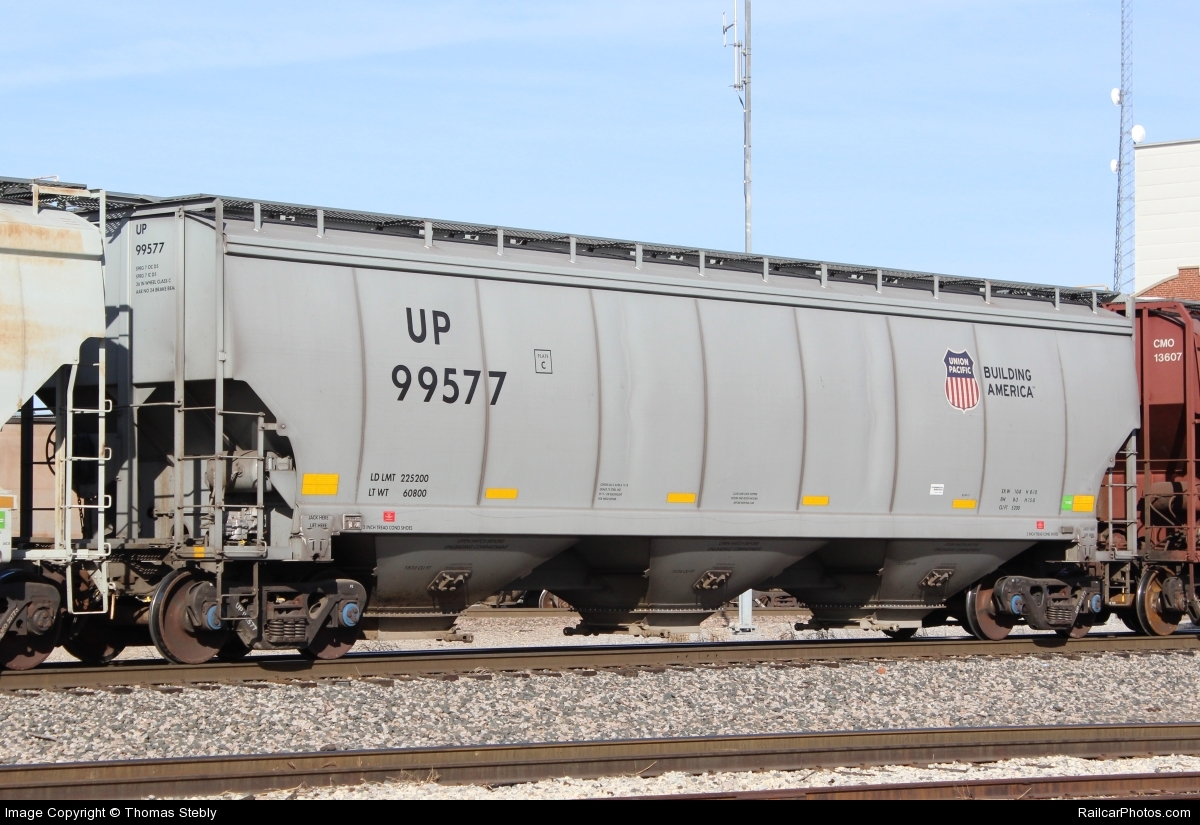 Another image from the same photographer, both taken in Enid OK, on the same line (maybe) that I see them on, just a bit further north. 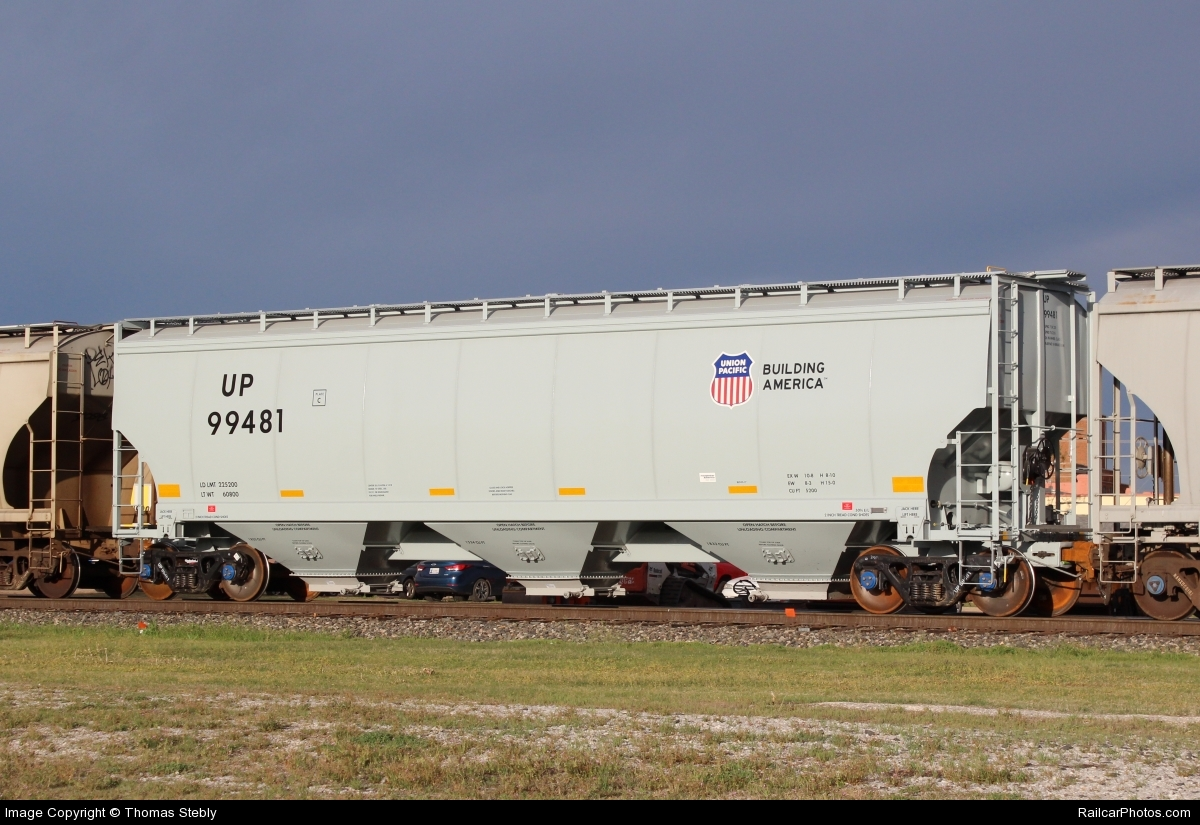 McLeod said:
Most of our outdoor pools are called skating rinks, and they don't leak all that much.
Click to expand...

Guy: Unless they're filled with Oil and the Flames get 'em....

Speaking of swimming pools and by extension, beaches, They have extended our sequester to May 1, (for now). That's getting dangerously cose to the summer season at the Jersey Shore.... Oh, my !

Went out to pick up a couple of prescriptions today, hardly anyone out, anywhere. Meanwhile, I'm still waiting for a call back from any of the local Dental Practices that come up under emergency care. Non emergency dental procedures are cancelled until April 20 as it now stands.

I can fill one of the two folks, BOB.

Staff member
If you use the forum notifications, please read this thread. (Short version, they're working again, if you're not seeing them, check your spam folder)

Short version - E-mail notifications of replies to your posts and private messages should be working again. Please check your spam folder if you have them enabled but aren't seeing the e-mails. Geek Version: When we moved to a new server, we had to re-establish our mail credentials to verify...

OK, if you have forum notifications on, see if you're getting the e-mails. If not, check your spam folder. Gmail got grumpy when we changed servers. I think I've got them calmed down now.

bob said:
OK, if you have forum notifications on, see if you're getting the e-mails. If not, check your spam folder. Gmail got grumpy when we changed servers. I think I've got them calmed down now.
Click to expand...

Yes they are in spam. March 29 was the last spam. Nothing in regular email.

I use Gmail. I just checked, and the only thing in my spam folder was somebody trying to sell me covid 19 face masks.

bnsf971 said:
I use Gmail. I just checked, and the only thing in my spam folder was somebody trying to sell me covid 19 face masks.
Click to expand...

Well, I just checked your account. You have e-mail notifications disabled. You are set to "watch" content but not get e-mail notices. That can be useful if you're very active and don't want to get overwhelmed by forum e-mails.

So, in your case, the fact that you're not getting forum notification e-mails means things are working as intended.

Staff member
That's another reminder folks. The e-mail notifications are handy, but purely optional. You can turn them off or on at any time in your profile settings.

We do that for two reasons. 1) Allowing you to choose whether to get them is simply the right thing to do. 2) E-mail regulations require that we allow folks to unsubscribe if they so choose and we comply with that.

Good Afternoon Everyone....partly sunny here in this part of Wisconsin

Work the entire day on solving my electrical problems with the two Tortoise switch machines. Finally have the Tortoise running only to find that the dwf, two lamp incandescent lamps are are not working. I did get one signla to work, but using 12-14 lamp bulbs at ,10 volts they burn so dim and I don't want to increase the voltage, but will install dwf and a standard LED signals from Tomar. Tomorrow, I'll work on the remaining signal, it's a bear to work under a layout and have to lift myself up through a 24"x24" opening to see the position of the turnouts.

I'll re-wire the dwf. signal and that maybe the fastest way to correct the problem.

Beady: Sorry about your lost. My thoughts are with you.

Short and to the point.

The other day I said, my wife and I made a trip to Steam Town and watched the fireman shovel coal into the fire box. Here's a photo of the engine on the turn table at Steam Town.
George 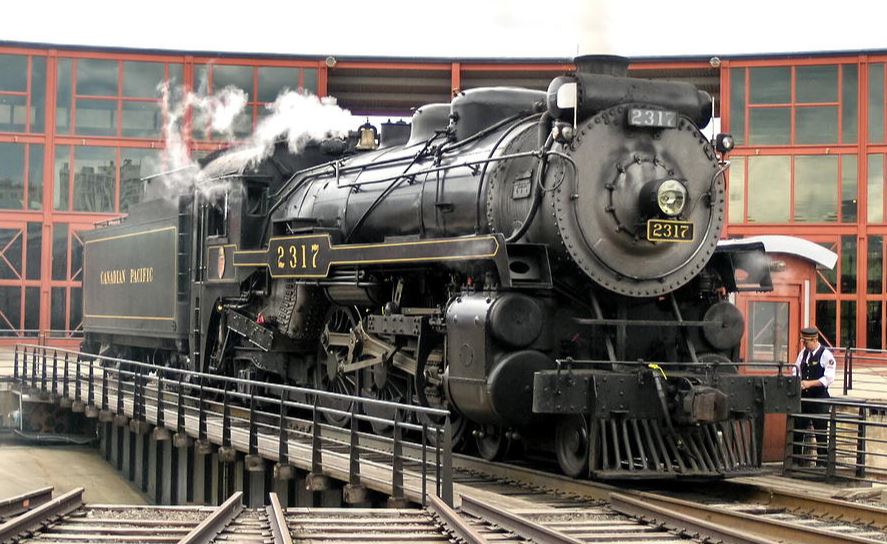 As you may or may not have heard, Maryland has now gone to a mandatory stay at home plan for all non essential people. Even though I am termed essential my underlying health issues (hypertension, diabetes and stroke) and the wifes (asthmatic) and #4 son (asthmatic and just getting over a bout of C-Diff) I have elected to take myself out of the rat race until further notice. #3 son is dropping off the remaining fittings I need for the BIG compressor, so now I can get all those projects (other peoples) off my workbench! Of course in between honey do lists. Wife is still working from home and will be until the school system reopens.

George, that is a purty engine !

Willie, the code 110 wheel sets threw me for a bit!

MMID F7s with a cement train!

Staff member
A couple of Norfolk Southern GE units at the head of a tank train, passing West, through Columbus MT. A commenter asked if BNSF was leasing NS power as they had seen others mixed in to their trains. 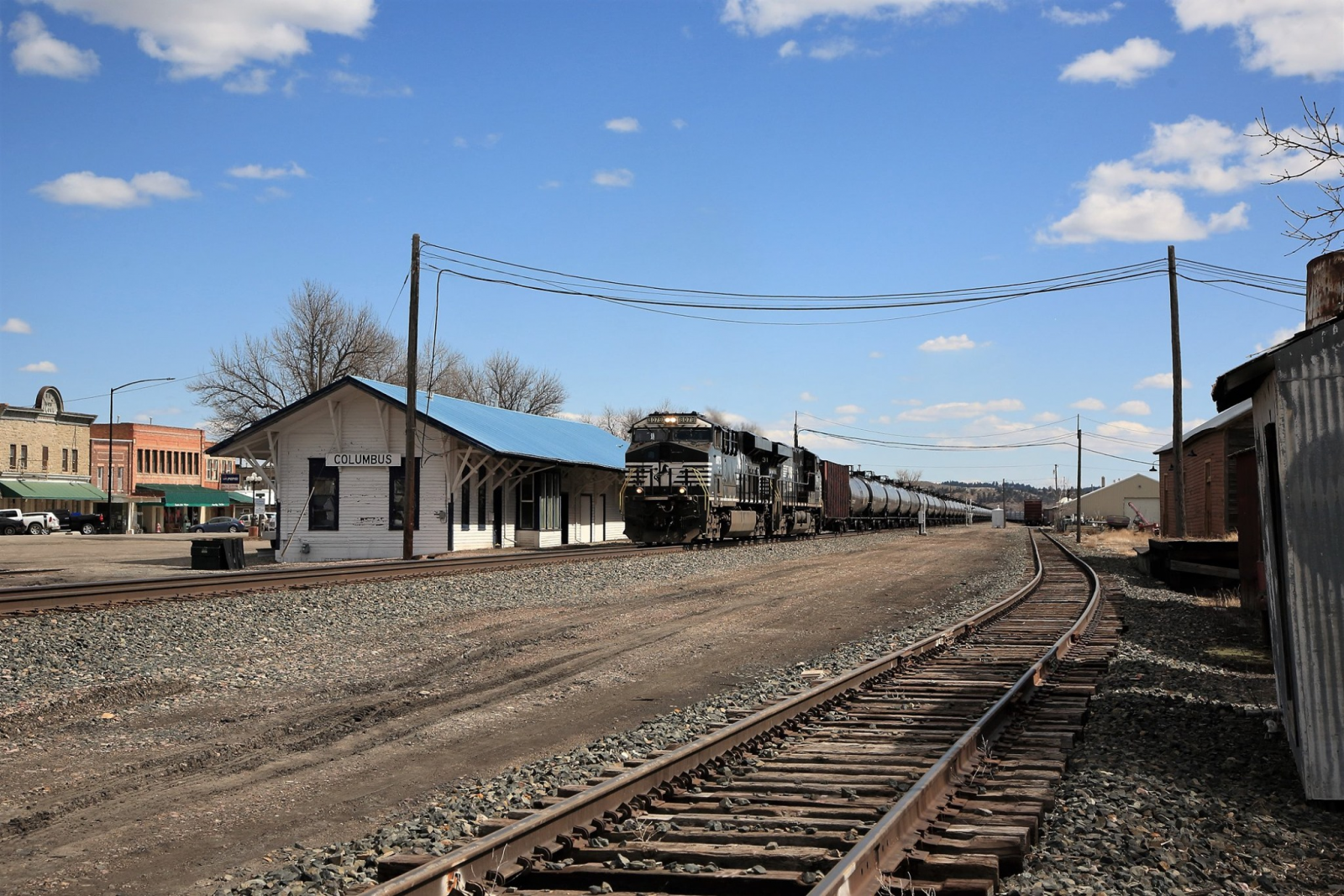 Followed by the Laurel/Bozeman a while later, with MRL's SD45 #346 and SD40-2XR #251 providing power. The architects of Columbus had an easy resource for building plans, by the look of it. Found them all in Walthers HO catalog it seems. 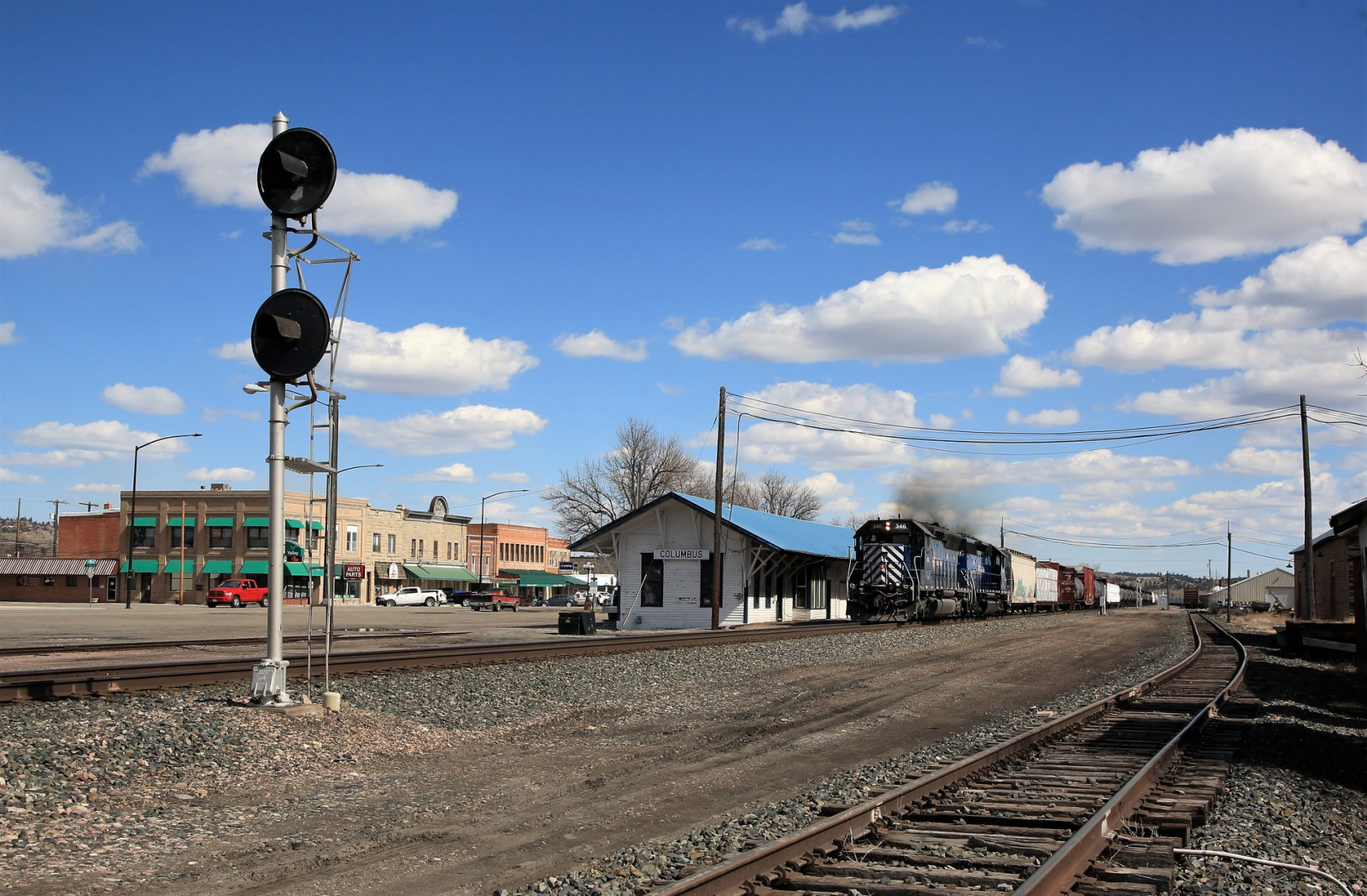 A closer up of the power as it passes. One of the oddities of the new livery is in the model type designation painted on the front of the sill of the SD45's, that previously were, like the following '40, also and which remains -2XR, the larger 20cyl loco has reverted back to it's original, without that add-on. 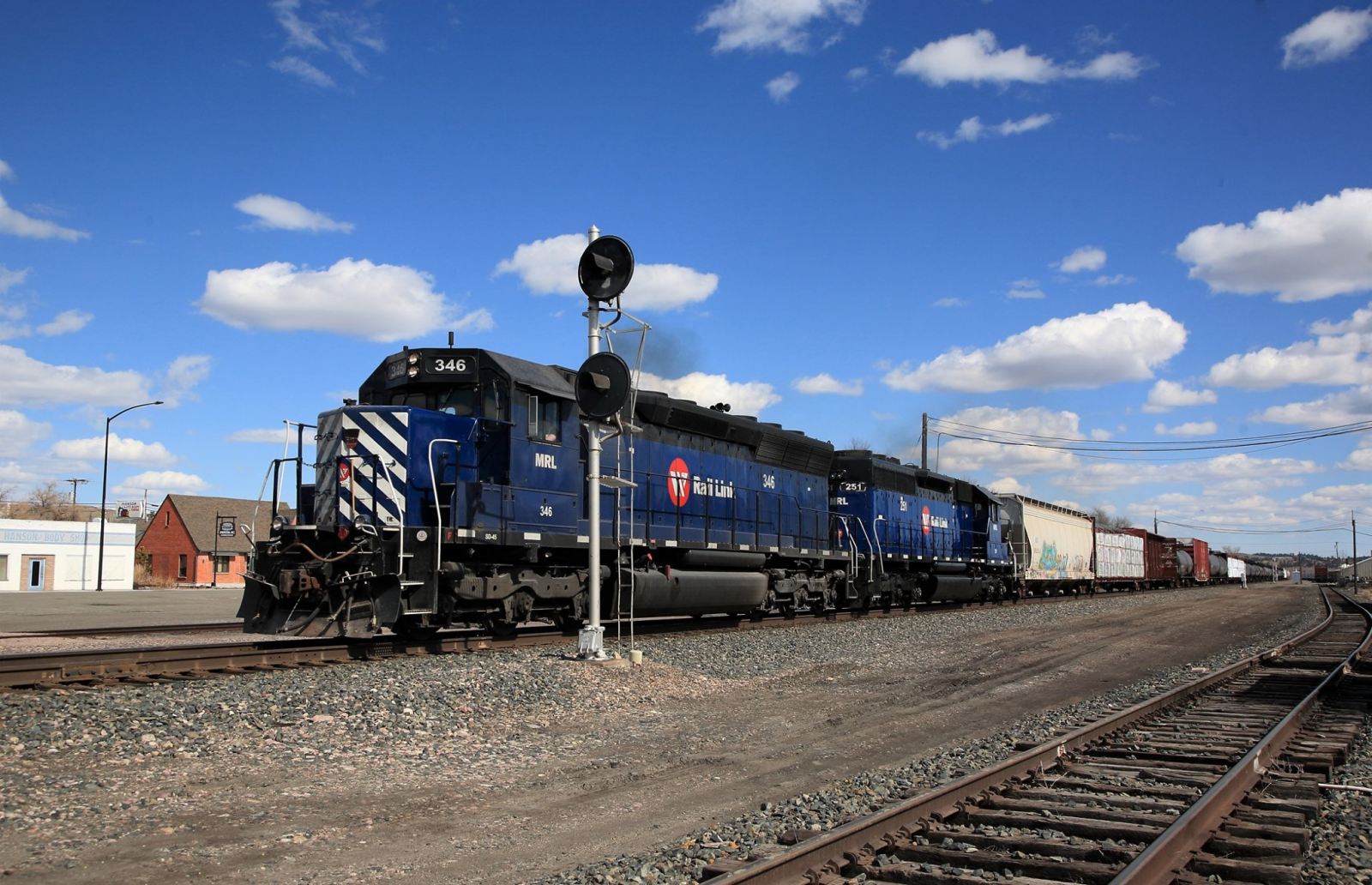 kbkchooch said:
I have elected to take myself out of the rat race until further notice.
Click to expand...

I sort of figured that you would slide that direction!
Good for you!