Willie That fence looks great, and the El Camino too. But didja have to paint it the West Virginia state car color?? (primer gray)

Chet I'm a cheapskate from way back, that C415 is an AHM piece, I built a new frame from brass, and stuffed the running gear from a Walthers FA in it. Cost including decoder less then 50 bucks.

Staff member
Getting warm again out here again .. supposed to be 96 today! No clouds in sight! I think that I heard that all the weather stations have been asked to remove their rain gauges.

Staff member
Chet, I'll bug my friend for one when he gets the new ones in production-- probably in another 5 years or so...

Afternoon fellers. Another rainy day today here in Charleston. Gonna share some of my ballast work with y'all. It's an improvement over my previous ballast. Definitely darker than my last ballast. Add some detail to it and it'll be spot on. 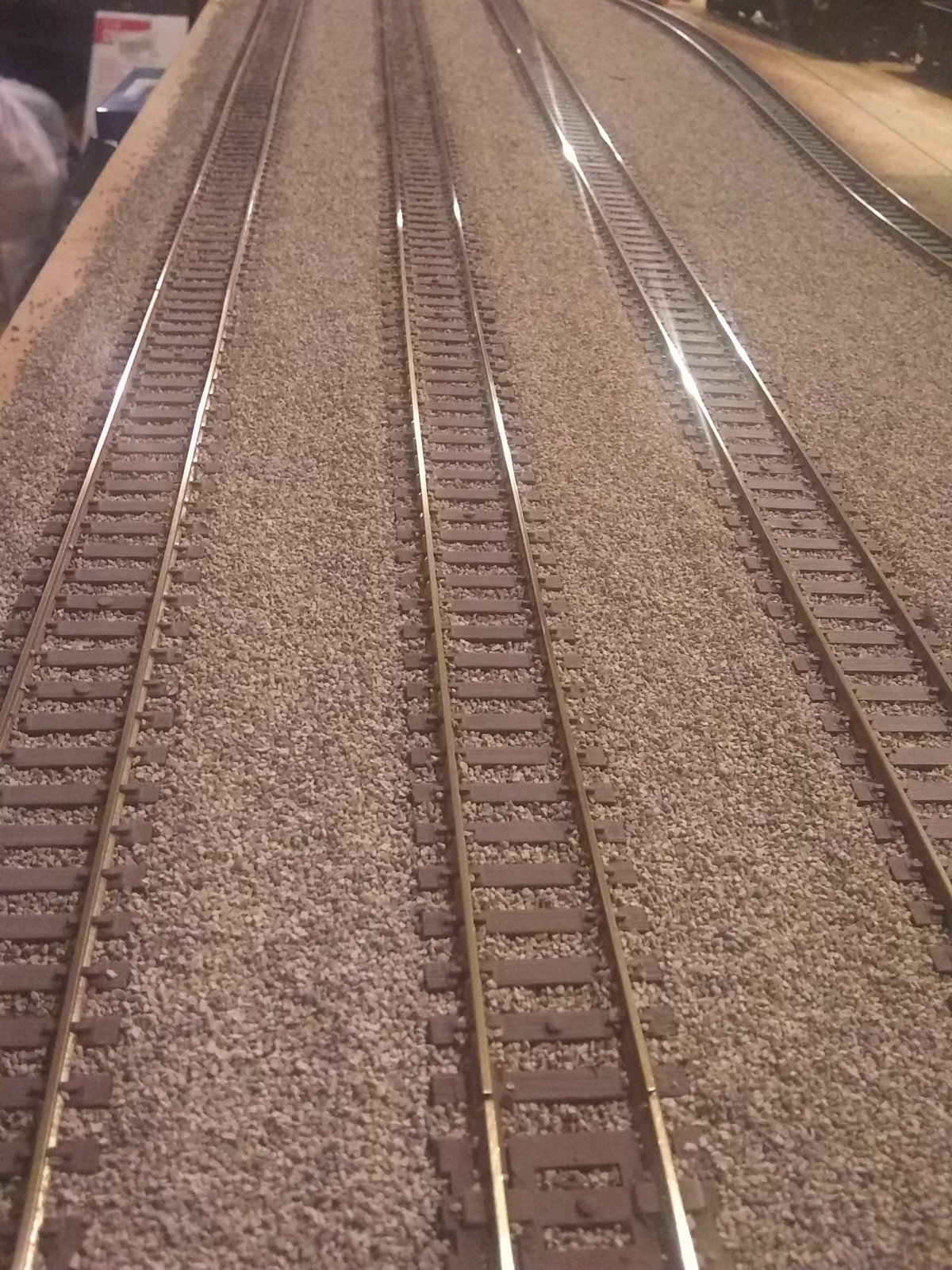 chessie_system3 said:
Afternoon fellers. Another rainy day today here in Charleston. Gonna share some of my ballast work with y'all. It's an improvement over my previous ballast. Definitely darker than my last ballast. Add some detail to it and it'll be spot on. View attachment 30741
Click to expand...

Staff member
Looks really good, Justin!
What did you use?

Made the trip up to see Jon and Phil today. I took my TT bridge and we discovered the shaft that comes from the motor and has a gear on the other end was just spinning (gear loose on shaft) so it would try to move the gears of the gear tower but couldn't. Jon tried supper gluing it on the shaft. After getting home I gave it a try. The bridge moved about 1/4 of a inch before it failed again, so I'm ordering the part from Walthers to replace it. It seems all 3 versions of the TT use the same exact part.

Johnny- It might be both. You would be surprised how dirty loco wheels get especially steamers for some reason. Very nice layout picture.

Justin- Great job on the ballasting.

Thanks for the kind comments and likes for my O scale rustic barn.
It helps my commitment to the hobby to get some recognition for the time and effort one puts into a project.
Plus, seeing other people's efforts exposes me to ideas and techniques I can "borrow".
Thanks again for all comments!

Mikey - Yes, I agree with others - that's a nice job on that barn.
Justin - That is some nice ballasting work. HO scale? What did you use, and what's your secret for keeping the ballast off the crossties?

Good morning everyone. 52 and clear out my window.

Sort of a slow day at the coffee shop yesterday, huh?

Nothing much to report from the train room. Finished installing the plastic window panes on my newest build, and I think I have the window scenes picked out. Just have to size them and print them. Put in an order with MBKlein - that will take a week or so to get here. Just some "scenicking" stuff (I'm getting sick of that word) and some track cleaning stuff.

Have a good day everyone.

Good Morning Everyone. 60°, partly cloudy and hazy this morning. Starting to warm back up a bit. Good night to sleep with the windows open.
Thanks for all of the comments on the fence scene, Joe, Chet, Johnny, Garry, Karl, Ray, Curt, and anyone else that I may have missed.
Out in the train shed yesterday, I did some work on the fence after the encouragement received here. My original goal was to finish by the end of the month; I will come close to completing the fence but not the whole scene. Just too many other things going on in life that are occupying my time. I also added some more figures to a couple of already existing scenes while I sifted through ones that I might use in this one. Ran trains as usual. By the way, I am really liking these new engines that I purchased from ScaleTrains recently, other than their couplers. Those have been replaced by Kadee #148's since the centering springs for #5's don't fit. They are right on par performance-wise as Kato's, and as detailed as Genesis's.

Boris said:
Your concept looks good...it's what you see from the cab.
Click to expand...

Thanks, I'm trying for some degree of realism as well as liking the whole concept of "driving through the scene". I will admit though, that the ROW is a bit compressed in most places on the layout. Yes I have a second level. It's not connected to the lower level as of yet, it may never be but I do have provisions for constructing a helix if everything works out eventually.
Karl - Primer Gray seems to be the prevailing color for most El Caminos here in Texas as well.
Chet - I'll have to put you on the list for fencing. I still have at least a dozen other locations that need that type. Board fences are so much easier to build, but there isn't a lot of them in the area or era that I am trying to loosely replicate, mostly barbed-wire and chain-link.
Justin - Good work on the ballasting.

Everybody have a great day. September 28 is National Drink Beer Day. Enjoy a couple of cold ones if you indulge, although they should be enjoyed every day.

santafewillie said:
September 28 is National Drink Beer Day. Enjoy a couple of cold ones if you indulge, although they should be enjoyed every day.
Click to expand...

I believe I will do so tonight. One for the day, and one for Brett Kavanaugh.

Here is a freight train rolling through the country.... 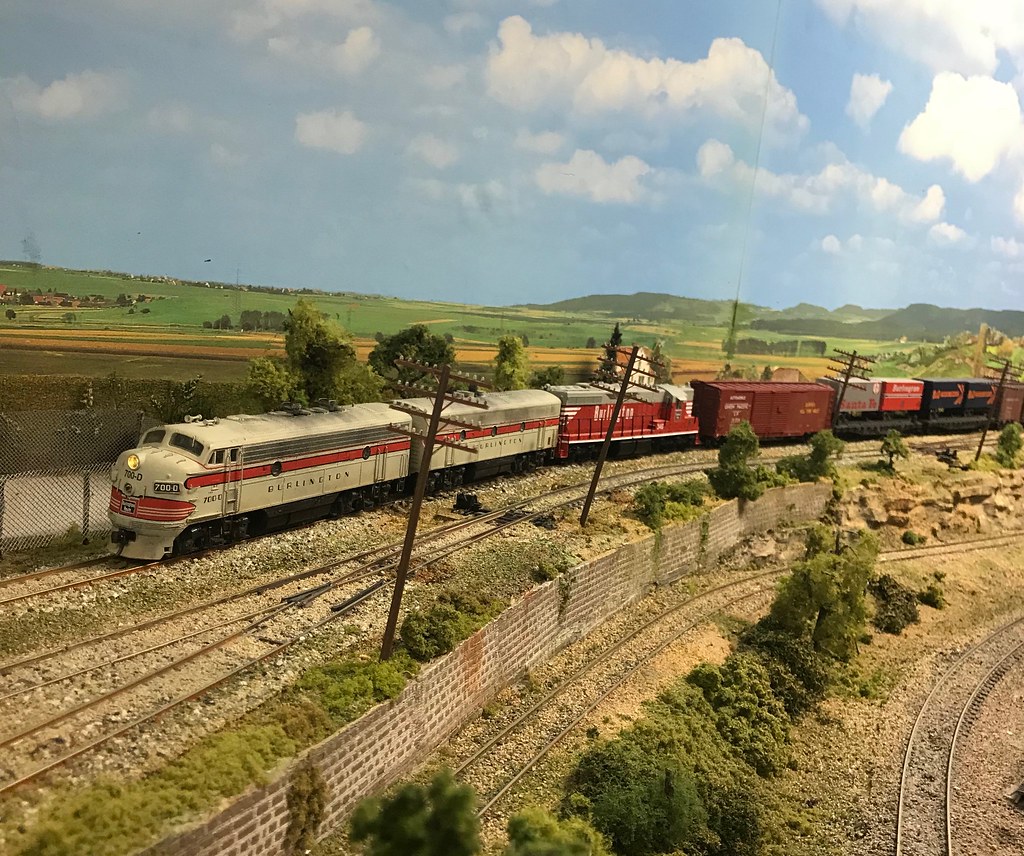 Good Morning. 36 degrees to start off the day with an expected high in the upper 50's. Fall is here.

Justin - That is an excellent job on the ballasting. Well done.

Curt - I have a Walthers turntable and I was not at all impressed with the drive system. I tried to use the Walthers motor and had nothing but problems. Got POed at it, tossed the motor and found an ild hand crank from an old Diamond scale turntable and installed that. Good luck with it.

Garry - Nice photos as usual. I am struggling to retrieve my photos from my old computer, but it is a big project with the bad hard drive. I did manage to get some and will continue to work in that problem.

I didn't un trains very long yesterday, but did take the Stewart F-3 that I had cusrom painted for my North Coast Limited, which has the identical chassis as the F-9 I have been working on and it easily pulled 20 cars up the two and a half percent grade on my layout. The grade is almost the same as the grade at the club. The F-9 weighs a ton. Looking forward to get it on the club layout on Saturday and see how it performs. My Atlas RS-1 is at its limit with 10 cars at the club.

I did manage to retrieve some rail pictures, so here is one of them. Looks like it is taking on water. 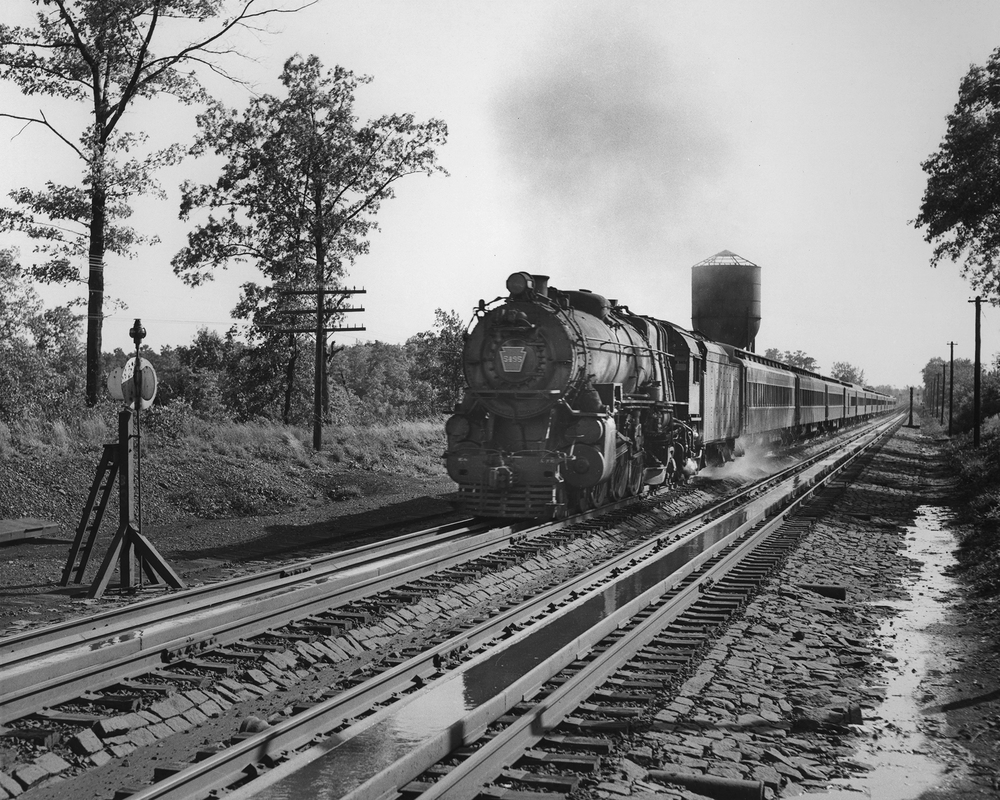 Staff member
A photo at Hartz Mountain National Park, Tasmania with my oldest in the starring role. He's cold. 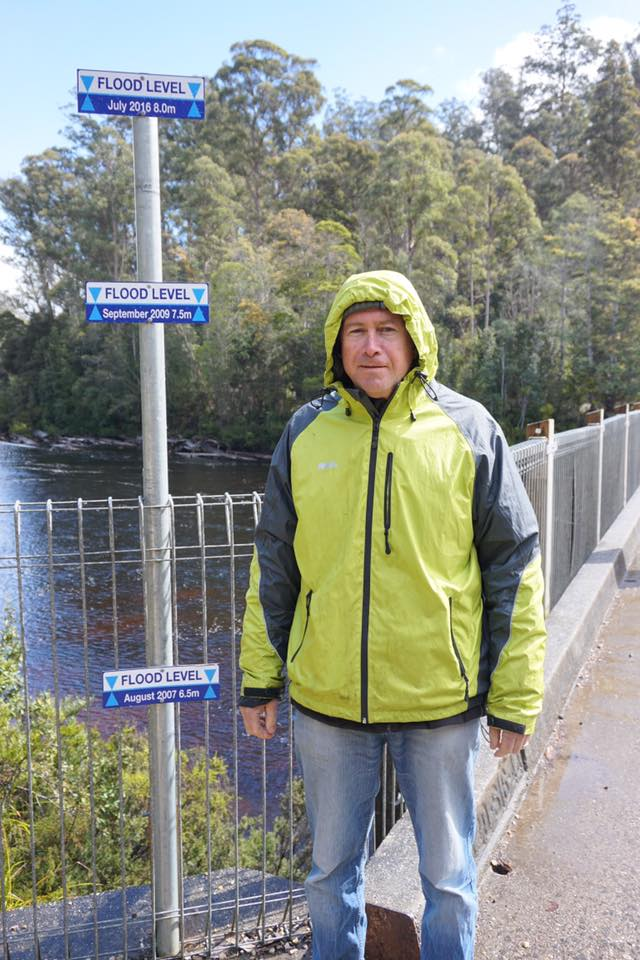 Going by those flood readings, they might be advised to consider a longer pole.

kbkchooch said:
I believe I will do so tonight. One for the day, and one for Brett Kavanaugh.
Click to expand...

From what I saw, he might want more than one...

Good morning fellers. Trip to the dealership this morning for one of those great annual state safety inspections. The joys of living in West Virginia. Being I'm licensed to perform these inspections I'm unable to do it myself as my shop is only allowed fleet only inspections. Anyways thanks to everyone who complimented my ballast job. It was tedious to say the least. I've been asked how I did this job and what I used. I used woodland scenics grey blend medium ballast. It is the closest to C&O style ballast as I can get. It's more coarse than my previous ballast. My previous ballast was like sand. Actually it was sand. Very fine ballast. It was really really white! So the woodland scenics is an upgrade. To spead the ballast I used a 1" typical paint brush. For leveling I used the typical tea spoon that I snuck out of the silverware drawer. To clear the ties I used my index finger. Used woodland scenics scenic glue to hold in place. Cleaned my rails with a brite boy and you have the end result that I shared. This typically is how I do my ballasting on my railroad. 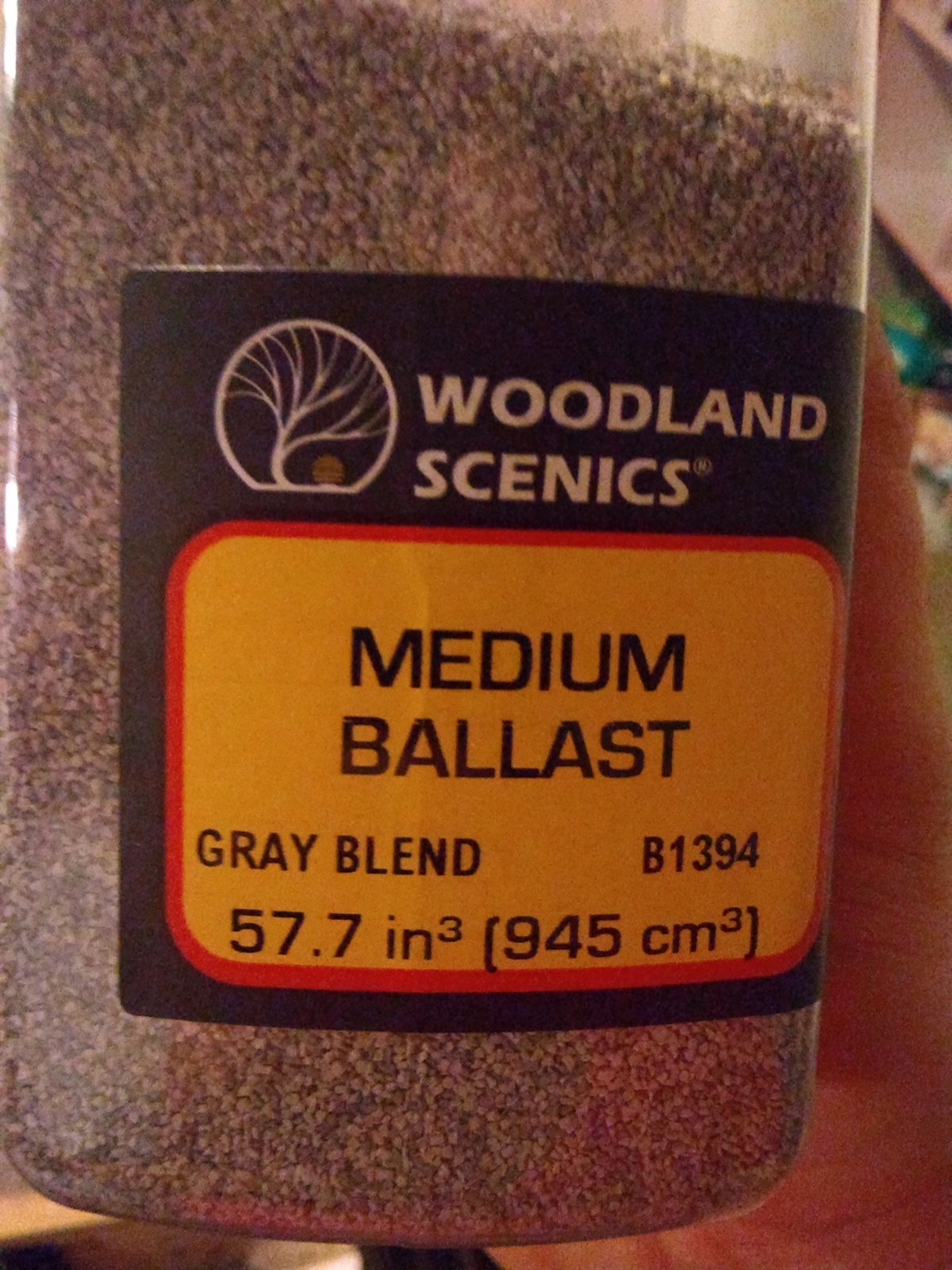 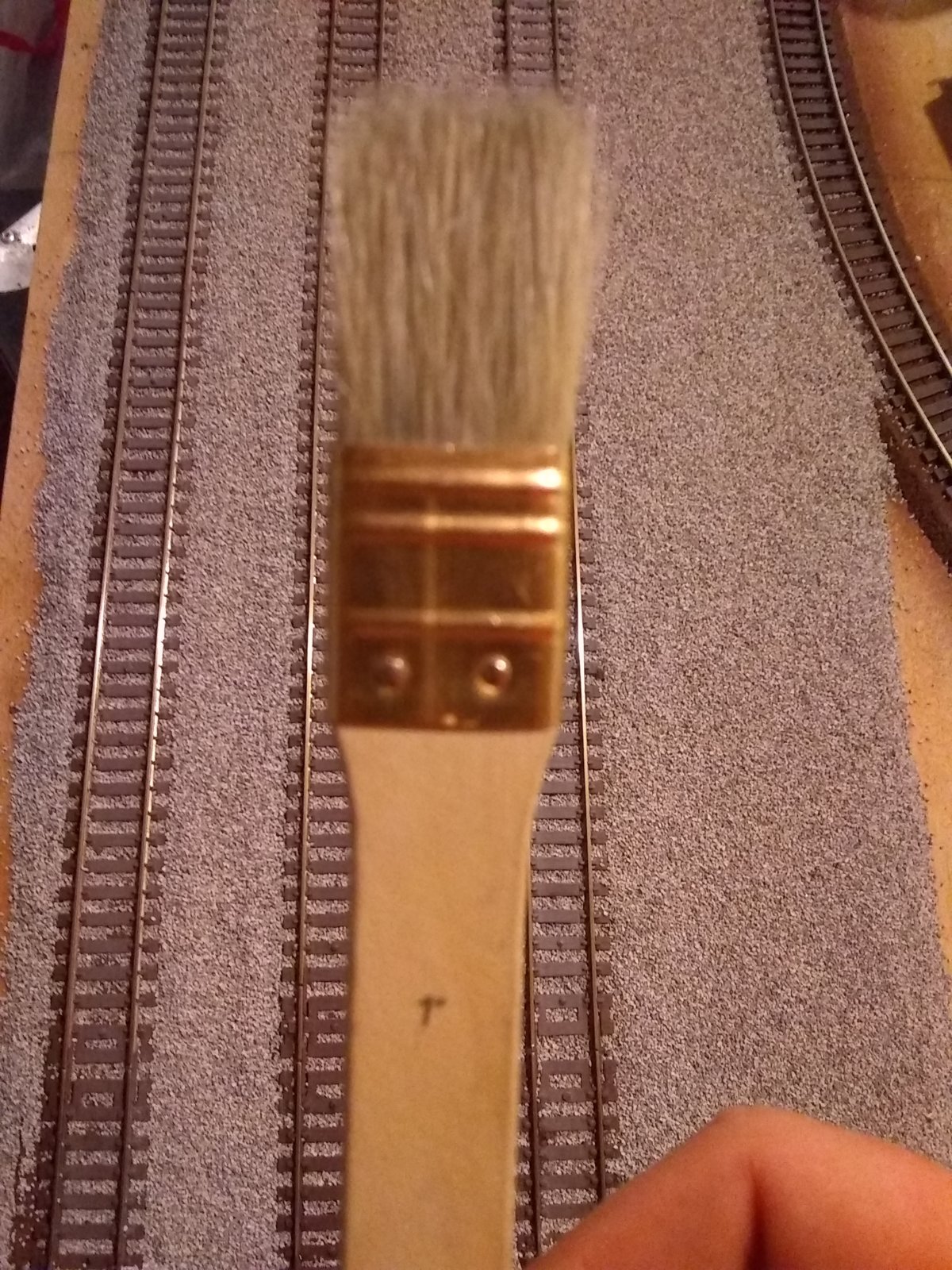 Another dark and wet day at the Jersey Shore...just a bit cooler .

Hey guys, This Yuengling is for y'all!

Made a trip to my parents home this morning with 3 portable fans since their AC is still out. They are getting a new one on Monday. Tomorrow I'm going down to meet up with some MRR buddies in downtown Orlando.

Willie- I did not realize you had a 2 level layout.

Chet- A hand crank may be what I end up with. Great pre-1950 K4 taking on water at some track pans.