Staff member
Thanks.
Obviously, I've had a couple of other things going on here...

Good Morning All. 75° and clear but slightly hazy. Spent the better part of the day yesterday entertaining my granddaughter and her parents who came for a visit. While she has been here before, this was a "get acquainted with the house" visit in advance of her staying with us alone for three days later this month. SIL and I added some child safety features to doors and cabinets since we long ago removed ours.
Train shed visit with her was short, as she was only interested in one train traveling from end to end before her attention span moved on. After everyone left, I ran a few trains for myself before heading for the pool. Today I am going to resume scenery with a 9 sq in area between two structures, with the backdrop behind and a road in front. While small, it helps finish a stretch of already completed town. I'll be using a backdrop building from fellow member Tomkat's old thread that Bob recovered for us a few months ago, for part of it. I had originally saved some in 2012, but the one that I am intending to use here I just downloaded recently.

Garry - While I am not into steam, that is one nice looking engine that you posted yesterday.
David - Welcome back. Thanks for checking in, many of us have missed you and your wealth of knowledge. Ahhh! Another manual transmission owner. I had to wait a week when I purchased my new 2009 Honda Civic years ago until the dealer could locate one with a manual transmission. Still drive it today.
Karl - Nice looking pup. Hope that it works out.
Ray - I like what you are doing with the flatcar loads.
Terry - You just take care of your loving wife, we'll take care of business at the Coffee Shop. The good news continues and I pray that it keeps getting better. Thoughts and prayers from all of us will continue as well.

Everybody have a great Labor Day weekend. I have a young neighbor, well 48 yo, who absentmindedly drove 30 miles to work yesterday morning and had to turn around and come home when he realized that they were closed for the weekend. He is a manager and opened up, turned on the air compressor and lights and waited in his office for 30 minutes before realizing it when no one else showed up. He sheepishly admitted to me that he didn't intend to tell anyone else what he did. I've known this guy since he was eleven years old when his family moved in about a quarter mile away.

I'm going to have to get an assembly line going, I have rather a lot, far more than any sensible individual would.

Thanks everybody for commenting on my NP 0-8-0.

Willie ... Thanks for starting the September Coffee Shop.

Terry ....Prayers continue for your wife.

Here is an SD9 on a branch line. 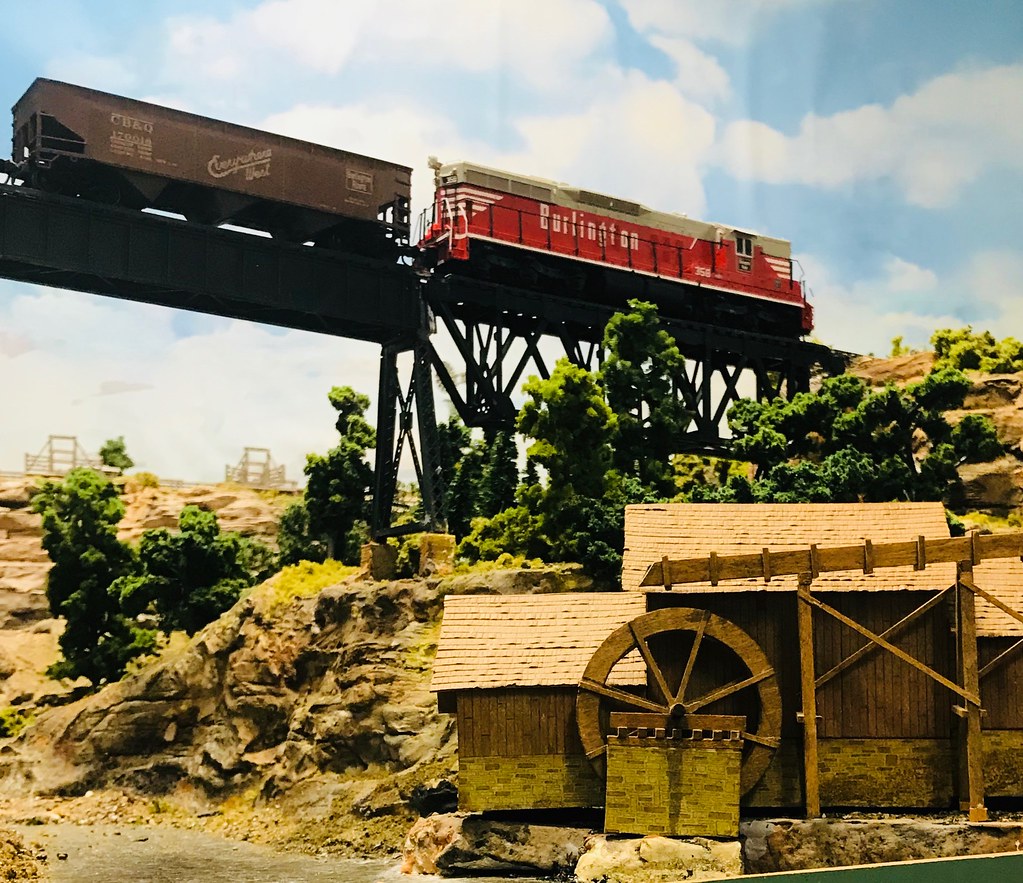 Good morning. A chilly start to the day at 40 degrees but the high should be up near 80. Did start a fire to take the chill off.

Willie - Thanks for the grand opening of the new Coffee Shop. A couple of cackle berries over easy with some bacon and toast please.

David - I was wondering where you went. Nice to see you back again. It can be difficult to find manual transmissions any more today. That's one reason I enjoy my old classic cars so much.

Terry - That's some nice sound on the Gp 35. Sweet. Hope your wife is doing better.

Willie - 48 years old is a bit young to come down with CRS.

I bet he was a bit sheepish. Post some photos when you get the scenery done.

Garry - Enjoyed the photos. An interesting angle of the SD9. That NOP 0-8-0 is exactly what I tried to get. By the time I saw that they were available, they were all sold out. That seems to be the norm when it comes to NP equipment. It's scarfed up as soon as it hits the market.

Here is a photo from the club. It is a train that has left Gardiner and is heading north back to Livingston alongside the Yellowstone river. Notice in the top of the photo the rock formation known as the Devils Slide which they also receated.

Here is a photo of the actual Devils Slide. Locals really enjoy seeing that scene as they can pick it out immediately. 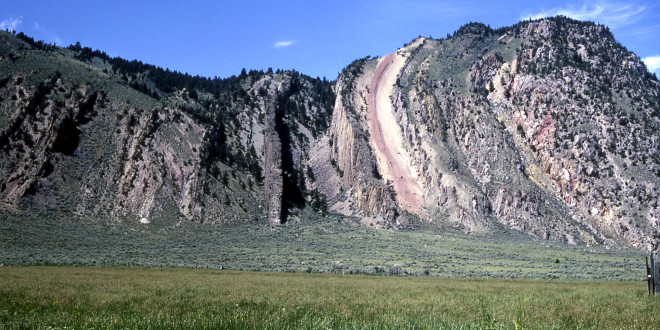 Yesterday the grand kids came over and really wore me out. They rode their bikes for a while and then wanted to run trains. I did enjoy that of course. Then they noticed the drone sitting near the computer and wanted to see it fly. Got it up andwas buzzing them and the dogs. Here's a drone selfie. 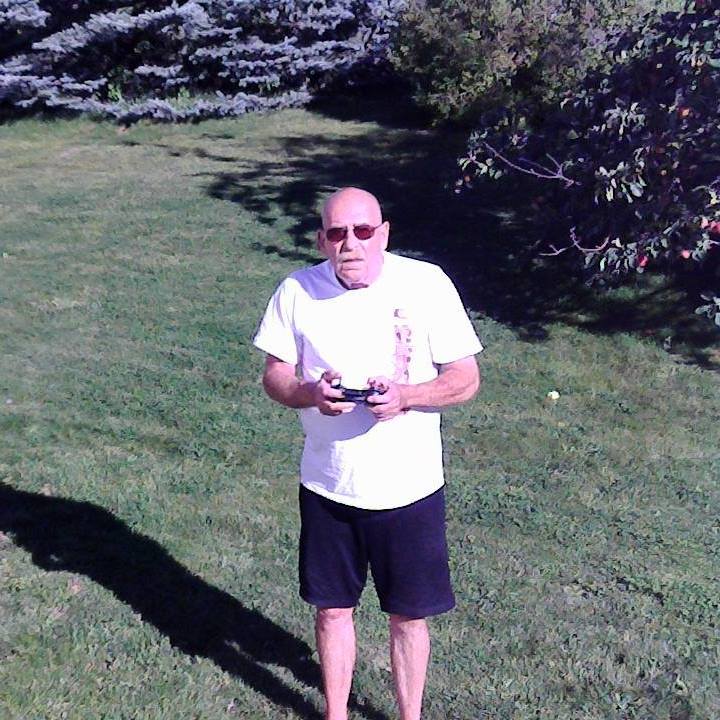 Managed to keep it out of the trees but a gust of wind set it heading into my neighbors pasture. Almost crashed it but did manage to get it back to the house. Then came grilling burgers and hot dogs. The kids really enjoyed out doxie Hank begging to some ice cream. He had never had any until a couple of weeks ago and I think he likes ice cream better tan bones. He can get quite animated waiting for the empty bowl to lick. Have to have another bowl for the other dog. She loves it also, but she has patience.

Later this afternoon, it's off to the daughters place for our grand daughters birthday.

Here's a rail picture for today. The tracks are MRL tracks along the Clark Fork River between Plains and Thompson Falls, MT. 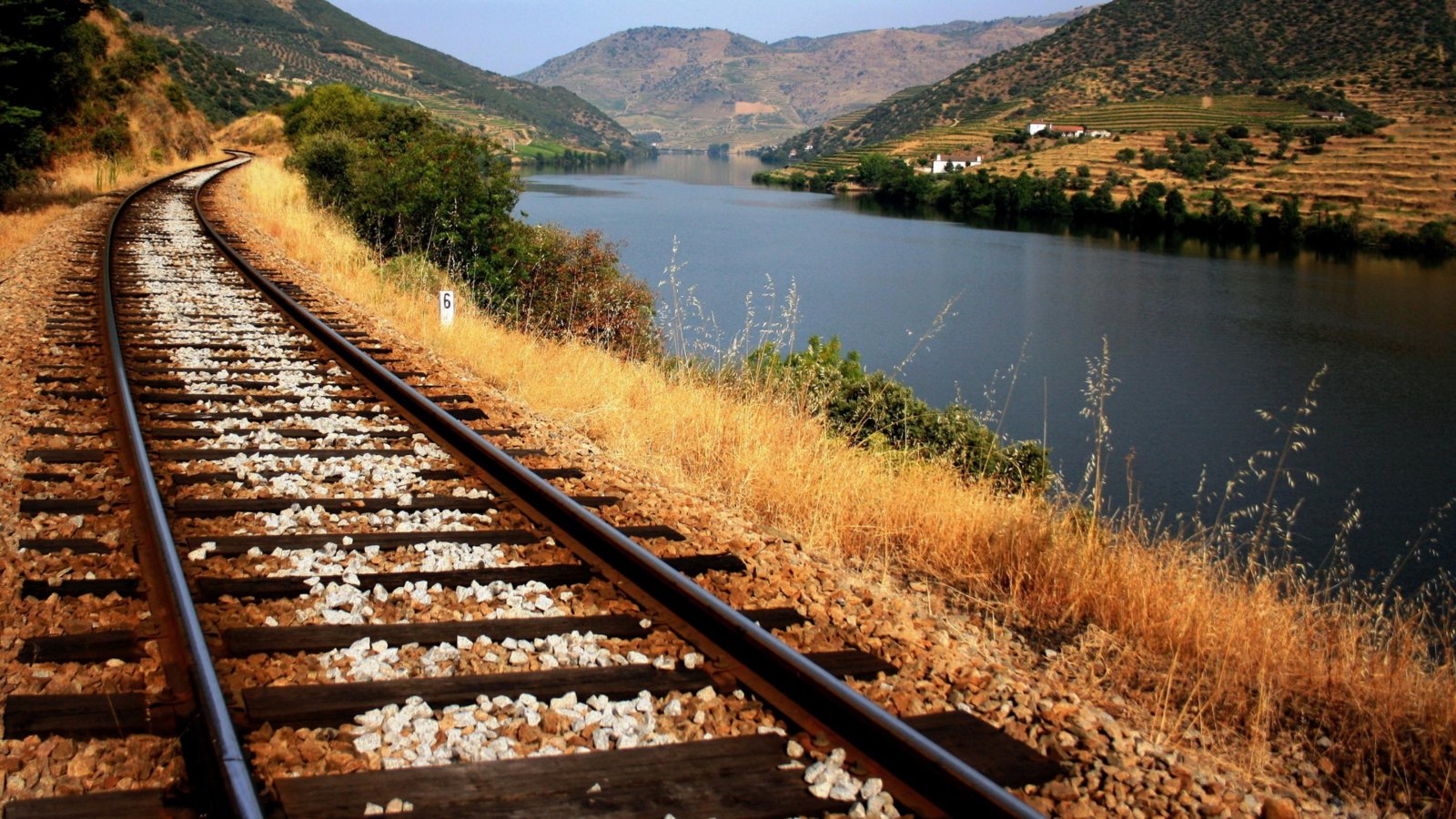 Staff member
Hard to believe that the YEAR is 2/3 over with already. .. Weather continues to be GREAT - just no rain!

Terry - Glad that you were only in the traffic lineup and not in the accident! Prayers that things continue to improve for the family.

Karl - Like the pup! Love those ears. Treat him nice and you will have a friend for life. I have never crated a pup but have been very lucky. A couple chair cushion ends chewed on but no destructive behavior. I have always had a dog door as well and have had a fenced yard. Have all my doggies chipped and I never take off their collars.
Some folks have their houses totally wrecked!

Willie - Funny about your neighbor. I showed up for work a day ahead of time once and Management thought it was amusing - NOT SO when I showed up a day late once!

He's currently known as Bud, but I was thinking of something more RR related, like Mikado, Shay, or something along those lines.
Terry, no qorries, well take care of the shop.

Still keeping my fingers crossed for the pup.

kbkchooch said:
He's currently known as Bud, but I was thinking of something more RR related, like Mikado, Shay, or something along those lines.


Still keeping my fingers crossed for the pup.
Click to expand...

Staff member
Then there is always "SPIKE", or "CROSSTIE"?

kbkchooch said:
He's currently known as Bud, but I was thinking of something more RR related, like Mikado, Shay, or something along those lines.
Terry, no qorries, well take care of the shop.

Still keeping my fingers crossed for the pup.
Click to expand...

Well, another year has gone by, and I have my birthday tomorrow. ... I already have my present which is a coal mine kit. I plan to combine it with one or two other kits to build my mine over the next few months.
Last edited: Sep 2, 2018

Before I moved I only had 2 loops of track and 2 sidings on my little HO layout. Tracks, plywood and a few accessories. It was run by Bachmann's EZ command DCC. I had my Bachmann Spectrum Series Acela train and Bachmann GP38-2 powered, B&O/Chessie coal train. A Santa Fe GP 40 and F7 on one siding. The B&O switcher I got from you on another. Every time somebody ran my HO trains they would always end up playing with that B&O switcher. My boys kept it on the "mainline" occasionally running it between video games. It is so realistic they way you have it programed. I'm sure this one will be just as much fun.

Staff member
Good morning. It's 68 and partly clear.
My wife is still in the hospital, may get word later today on when she will be released.

Good Morning Gang. Happy Labor Day. 74° and mostly cloudy right now. Forecast is for an 80% chance of thundershowers beginning around 11:00 am, with the high temperature today of only 80°. Seeing is believing! This will most likely be the last week to use the pool, as the high's are not expected to even hit 90° for the next ten days. Abrupt end of summer. Thundershowers are also in the forecast for eight of the next ten days. Yesterday's plans went awry early, but not in a bad way. My neighbor, the one who mistakenly drove to work Saturday, was having what started as a small Labor Day party for family and a few close friends. It was a fajita party with a professional fajita chef. He ordered thirty pounds of skirt steaks and twenty pounds of chicken which is far too much for the twenty or so guests. So he invited us and our other four closest neighboring families over to join them. I grabbed a twelve pack to share and we walked up the road and had an enjoyable afternoon. Today I smoke some spareribs for our Labor Day enjoyment, while he and his family travel to the nearby ATV park and get muddy.
You might ask, what's a professional fajita chef? Well. he brings a large charcoal cooker and however much meat you order, and finishes grilling all the meat before he starts drinking. Several of my former employees moonlighted doing this for extra $$$. That chef told me that after yesterday's gathering, he was headed to another in Denton to start cooking two goats in a pit overnight for a large party today. Speaking of goats, a different neighbor sold 200 goats last weekend in less than four hours at $75 cash per goat at the local flea market. The Hispanic community in Texas cooks lots of goats for holidays. My goat herder neighbor does this four times a year.

Needless to say, I didn't get to any projects in the train shed yesterday.

Garry - That is a neat mill(?) in that SD9 picture. HAPPY BIRTHDAY today.
Chet - Chuckle! I haven't seen or heard of the term "cackle berries" in at least fifty years. My grandfather used that term every morning. Watch out for drones taking selfies, lest it take a flight path towards the subject! Great club picture yesterday.
Louis - All right now. You've been in the new place over half a year and we're still waiting to see at least a loop on plywood.
Terry - Continued best wishes for your wife and family.

Everybody have a great Labor Day 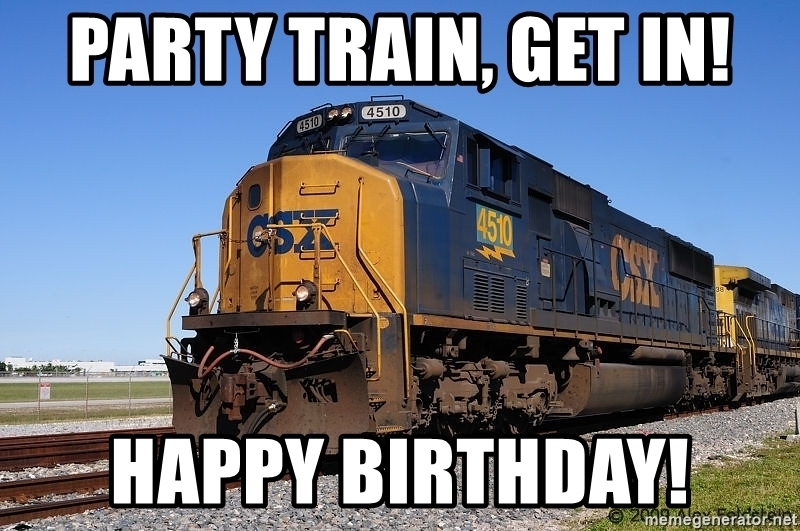 Wishing everyone a "laborless" Labor Day or a "labor of love" day cooking and eating.