tootnkumin said:
Well....my computer problems continue. My main Win10 machine seems to have settled down, although I'm not totally certain. Did a Reset, but still had some issues, seems to have been OK today. Can't say the same for the mini tower I got to run JMRI on, seems to have died because of equally strange reasons. When trying to boot up the screen gets taken over by vertical columns of what look like hundreds of fine bars of military decorations, jiggling or flickering which also fades and obscures the background. Managed to make out the words run recovery I think, but was unable to do so through it. I had previously Uninstalled an AVAST anti virus program and secure browser program that Google had blocked as dangerous. At the time of doing that, subsequent boot up speed etc improved markedly. So it looks as though I had inadvertently installed a fake when originally looking for a free one when setting it up. Even the WIFI dongle was not flickering or even lit up..

Because the Win10 is about 8-9 years old now and started life as a Win7, I'm looking at a new one with the much improved i series intel CPU's. Present one is the first of the i3's and am told the latest version 10 of that is as fast as the original top of the line i7. Think I'll go for an SSD hard drive too. 8 Gb of RAM offered as well, instead of the current 4 for about $AU900. Whether it's even worth having the mini tower looked at with it's Pentium processor is moot. Was so handy as it fitted nicely inside the desk that also contained the 22" monitor all enclosed when not in use. A later model refurbished one I guess. I like a larger screen than is available in a Laptop.

Ray, I also have an older computer to run JMRI and Lokprogram on. In my case, it's a Dell XPS laptop. When new, it was top of the line, but that was 8+ years ago. I kept it on Win 7 until the first of this year when support for that OS ended, and upgraded to 10. That has brought on all manner of display issues such as you're describing. I finally wiped the drive, and installed Windows 8.1 on it, and the display problems stopped. It used the Win 10 license key stored on the motherboard to activate the older version. Windows 8.1 is still supported by Microsoft.

Had to visit with fam and have lunch for the birthday girl yesterday. But, while out, I dropped the wife at the fabric store and ran around the corner to the 1/2-Price bookstore. Not much in the way of railroad books, and NONE on Model Railroading. I keep thinking of the few I sold off before we moved out to La La Land four years ago. Just wasn't room for my library out there.

So, I'm rebuilding. I decided on three more for pics than for reference ability. Plus, with the recommendations from TWFOREMAN, I've got two more specifically about Great Northern History on the way. 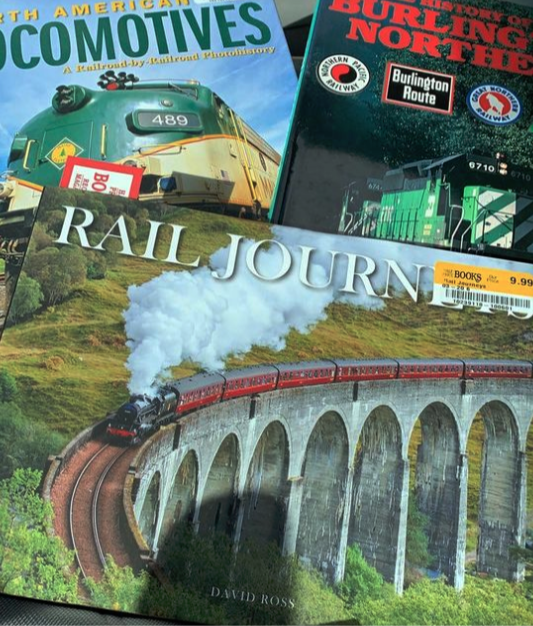 Today will probably be drilling bus holes in the grid, adding legs and braces, and maybe the initial stage of leveling. It's not tooooooo bad right now, but a couple of sections are squirrely.

Staff member
WOW - It appears to be GG1 day (make it a holiday) Could use a "fun" holiday! Strange, my computer does not have the GG1 key installed - Louis mush have an "add-on"? Nice pic, LOUIS!

Cool this morning at 55 degrees with only a 90 high expected - was 92 yesterday. I had to get up and close the bedroom window as the wind off of the desert was too cool - either that or look for a blanket!

IBKEN - good to here that you sorted your truck problem. Have to give credit - TERRY is a pretty smart guy! Now, may we see a couple close-up photos of the finished product?

OPPS - I just hit the wrong key and now my post is screwed up, I'll reload and see if it correctes itself?

Louis. Nice pics as always I like the Conrail piggyback match up the best

Willie. Thanks for the nice complement I really enjoy O scale now it’s much easier on me to
build. Thanks for sharing the Foley pics I’ve enjoyed them


Toot. I hope you get this computer thing fixed soon I know that has to be frustrating

Yesterday I built a Team Track Road on the O scale layout and that was about it besides ran some trains. Here’s some pics of it as well as some others take care 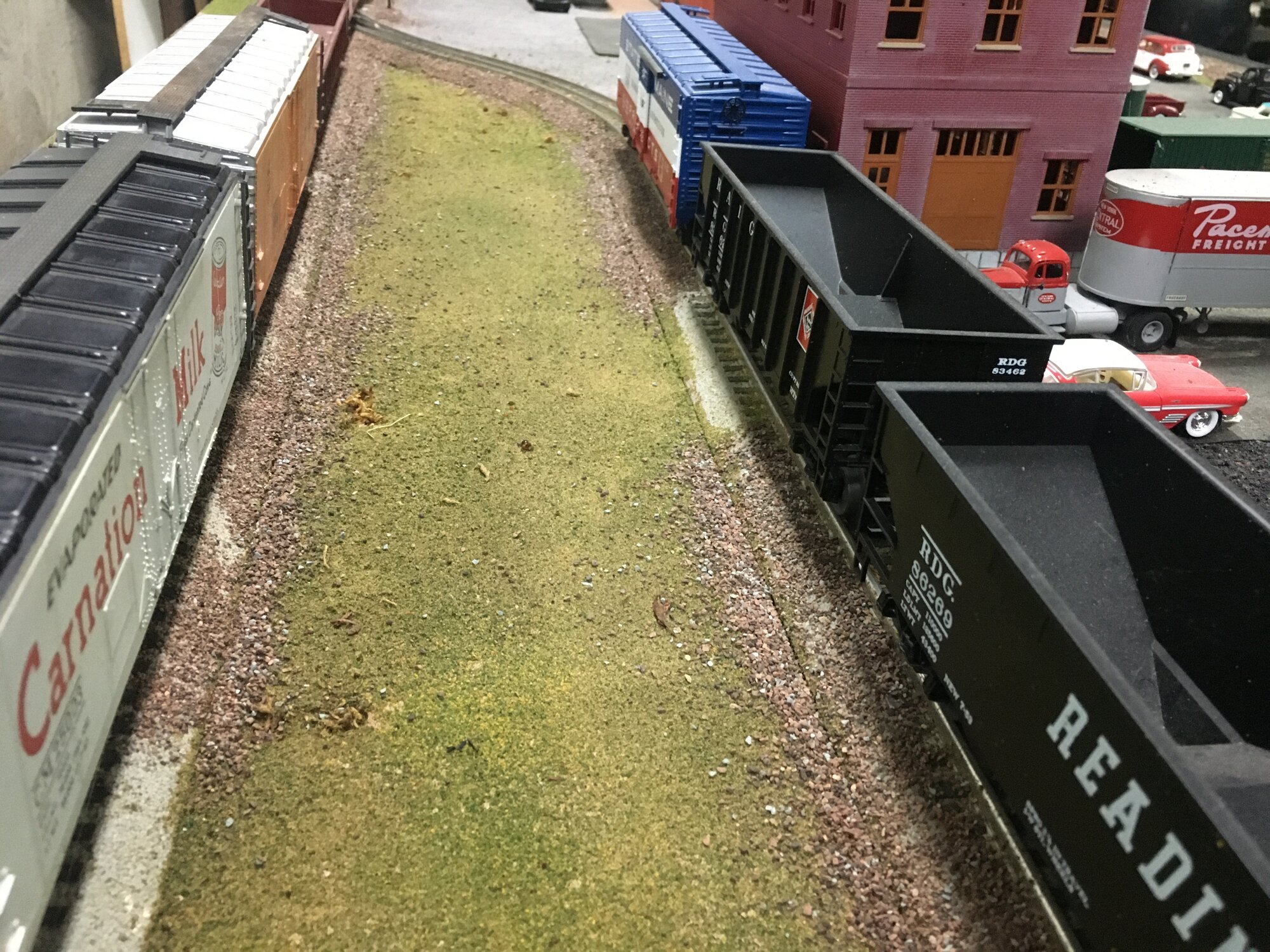 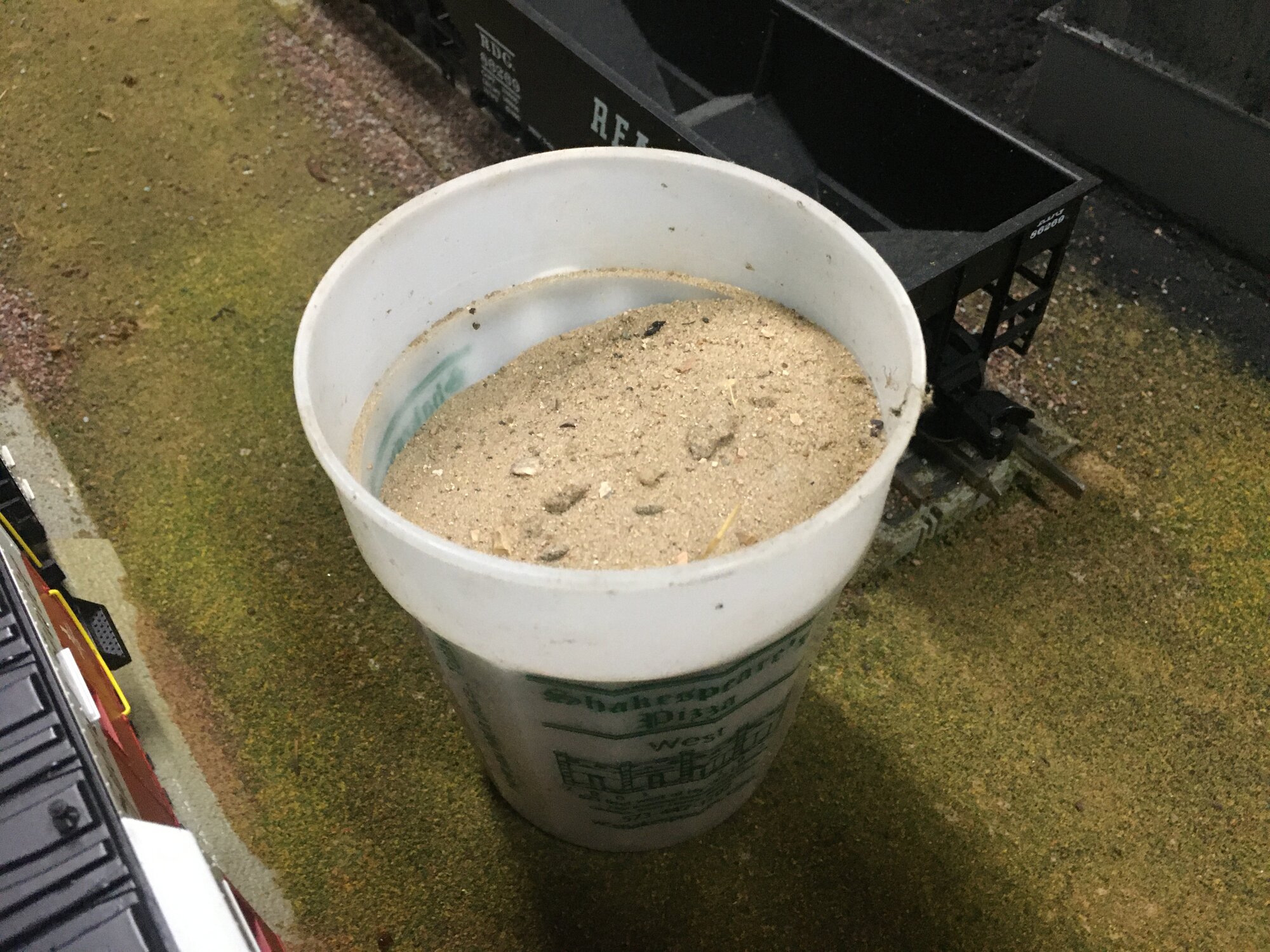 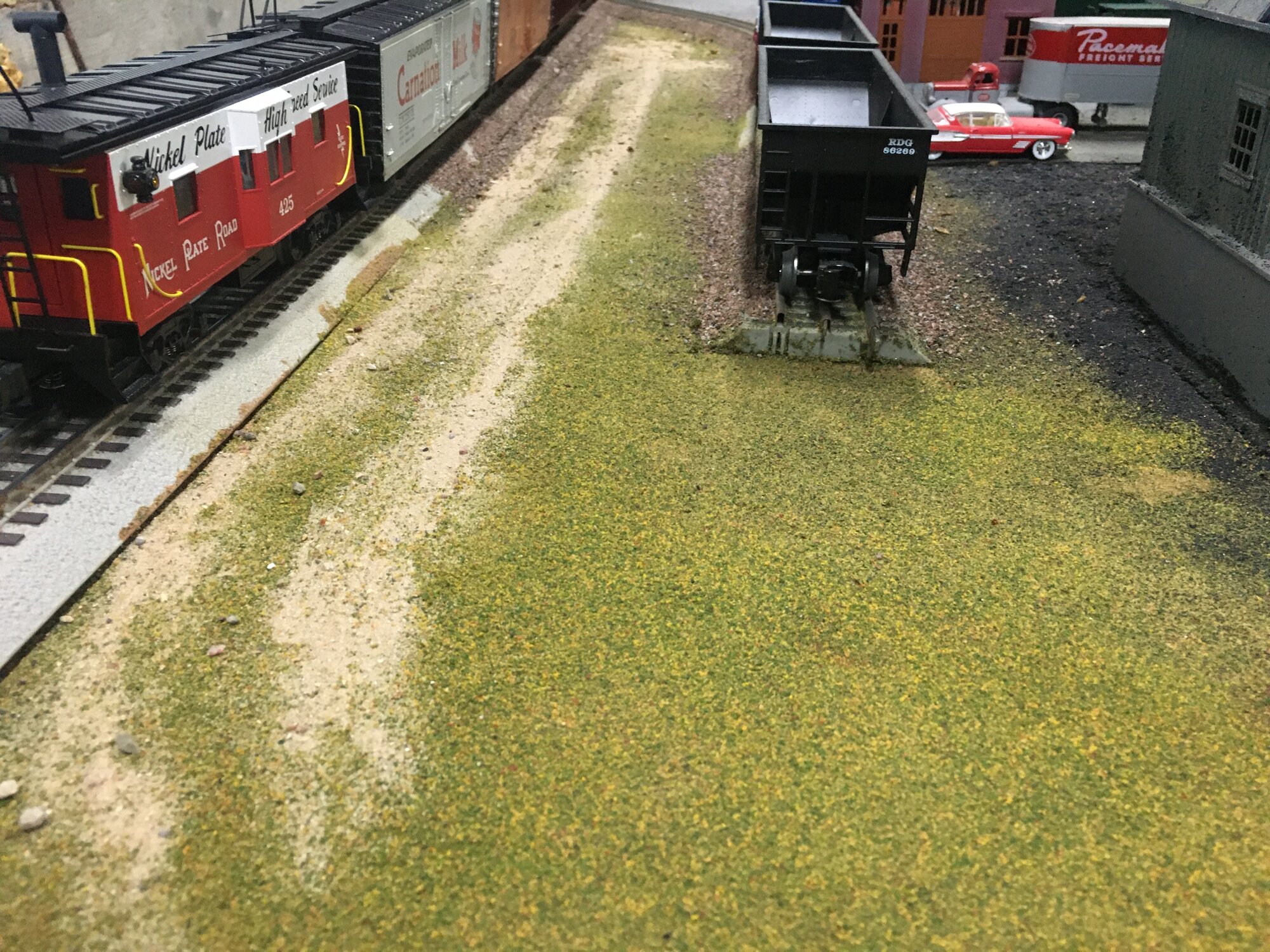 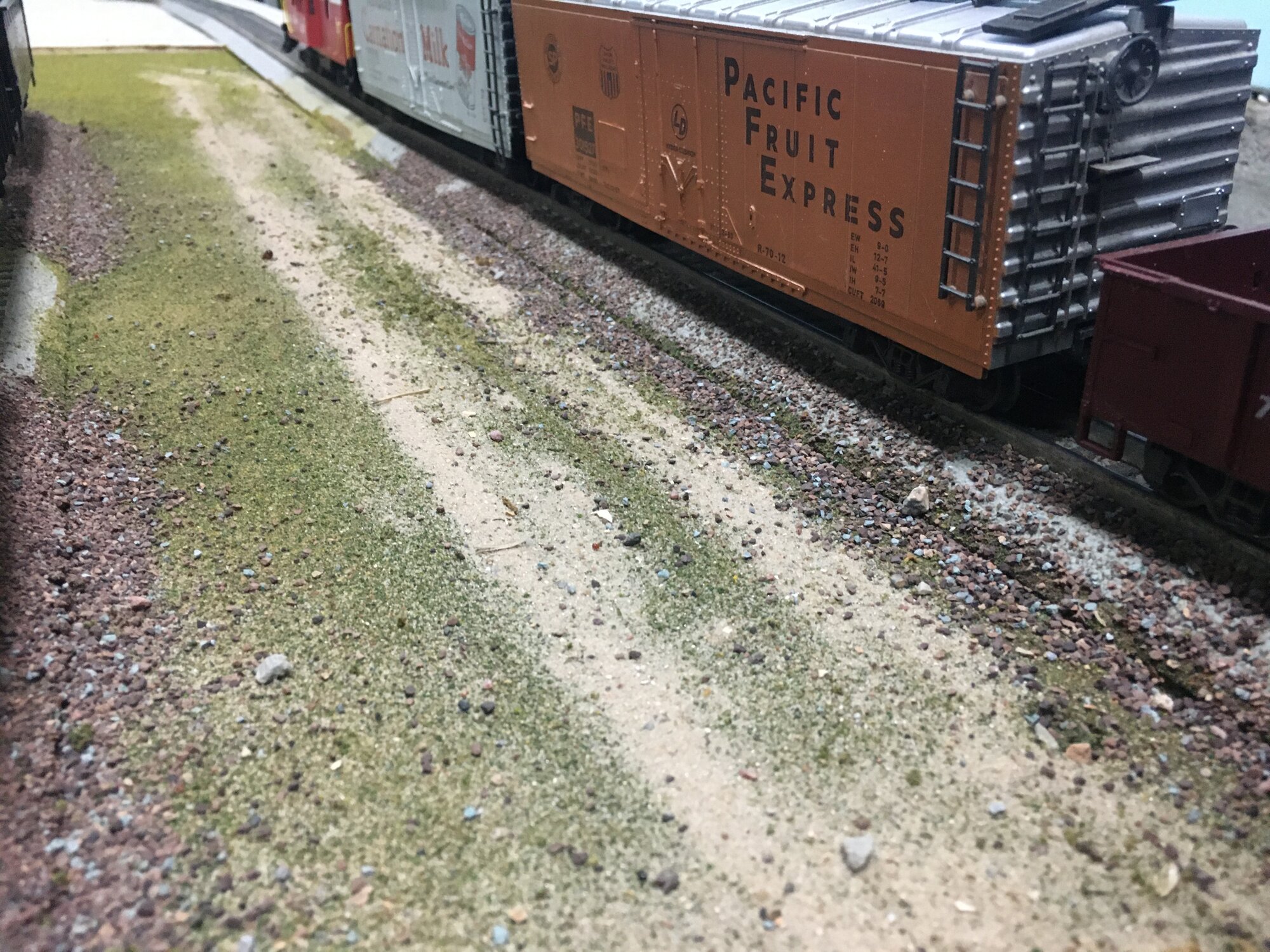 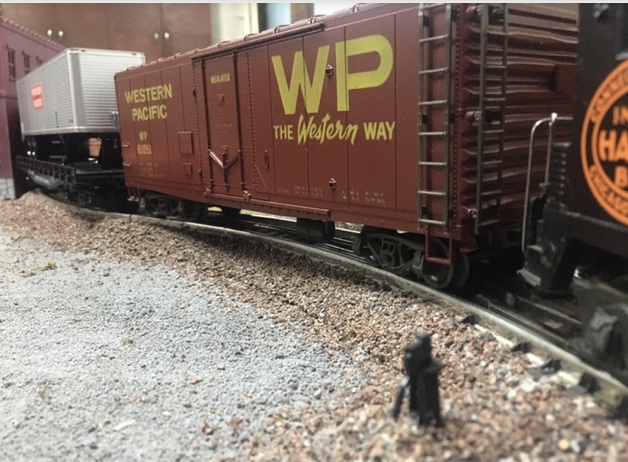 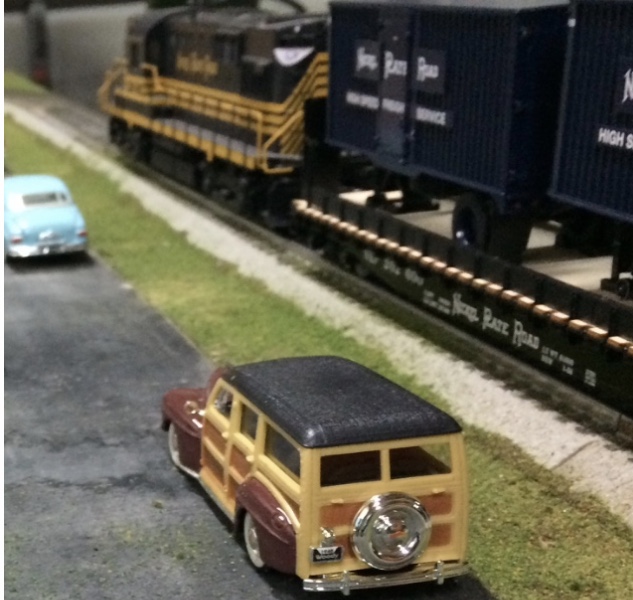 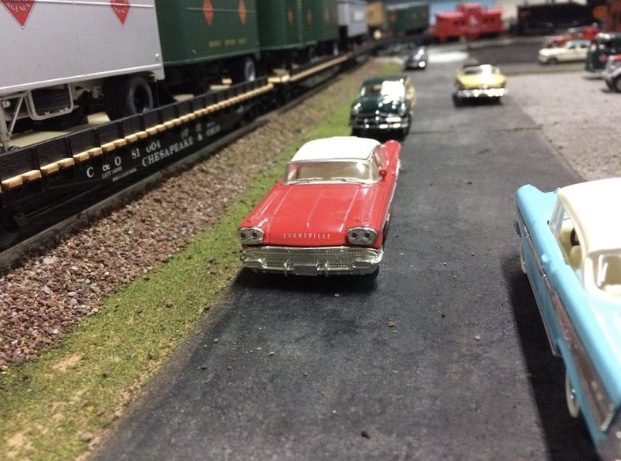 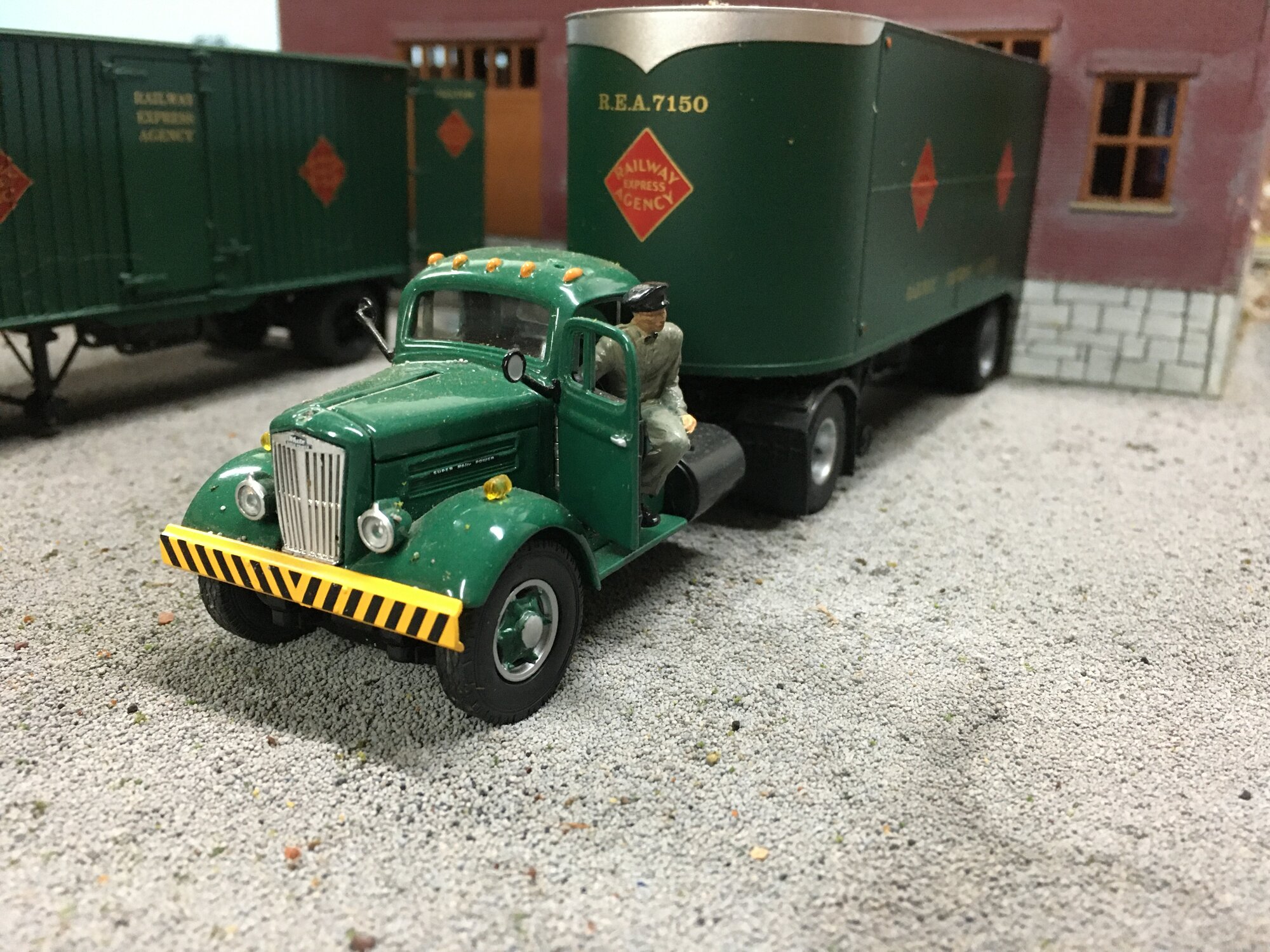 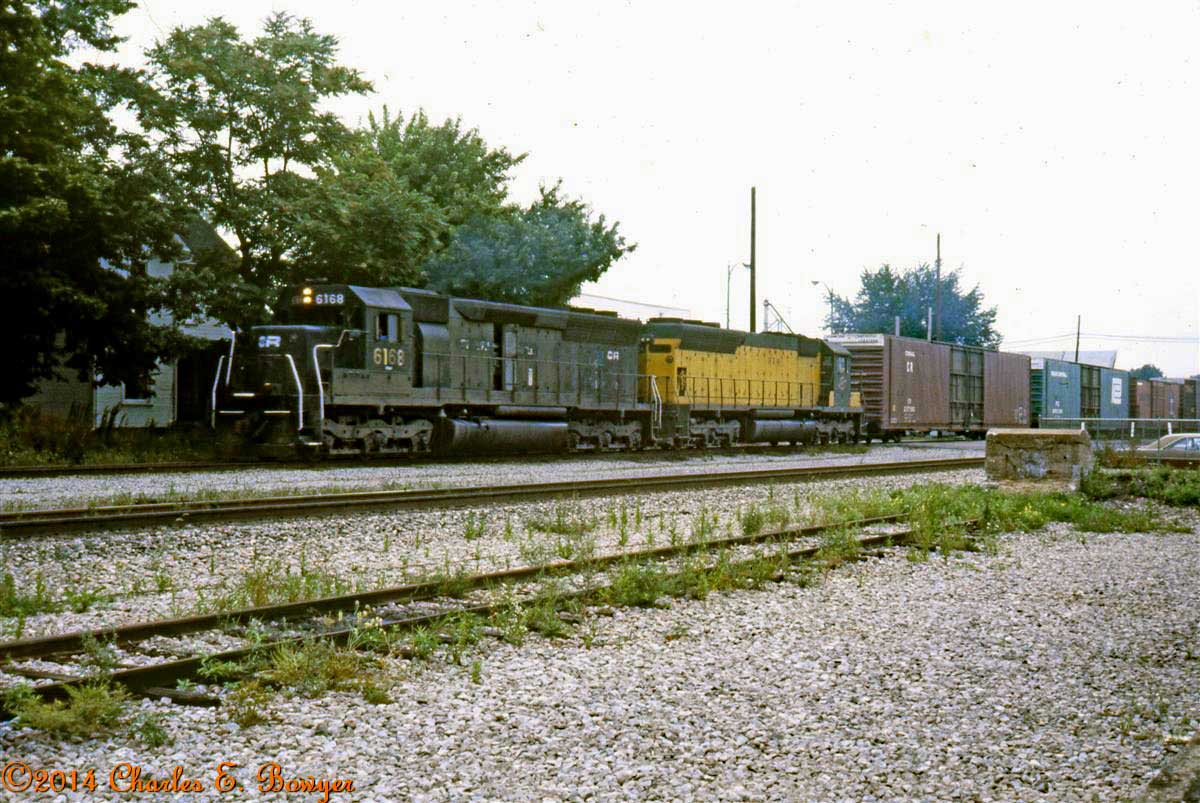 Staff member
Good afternoon. It's mostly cloudy and 82. I just finished mowing the lawn for the third time in a week...

bnsf971 said:
Good afternoon. It's mostly cloudy and 82. I just finished mowing the lawn for the third time in a week...
Click to expand...

Terry I feel you pain. At first I like it then by the end of the season it feels like a job I got out of it this weekend it rained

All I accomplished today was yard work with the grandkids or as I like to call it "lawn camp". Tomorrow I should start mounting the rock faces on the inclines.

Thank you for the likes yesterday.

Willie- I have enjoyed looking at the museum photos.

TomO- Nice loco photos also. I remember seeing the Big Boy at Steamtown. I couldn't believe how large it was.

Got skunked fishing.....I have to remind myself on days like this they there is a reason they dont call it "catching". SWMBO is now talking about wanting to buy a boat. Evidently, she likes drowning worms more than I do! As we were leaving the lake, we got to the end of the access road and who turns into it going the other way,no one but ex #2 (Ken might remember her) Thank God she has never seen my new truck before, or the Go-tee and shades I was wearing. Wife and I had a good chuckle about getting out on the park at the right time!!

Been spending part of the weekend getting stuff organized in the basement in preparation for new benchwork. Yup. I'm finally going to decommission the modules and build a real layout . Part of the benchwork will include a place for a PC for programming and sound file changes. Also a DC test track, disguised as an abandoned spur'. All rolling stock that does not fit my operational scheme will be considered excess and disposed of. (IBKen, you better come and get those coil cars if you want em!!) Most of the excess will wind up on fleabay or the local auction house. I find that I have 4 Rubbermaid tubs full of unbuilt structure kits, and 3 tubs full of built structures (some by Howard Zane), and that doesn't include the structures on 22 feet of modules!! Time for me to, as they say, poop or get off the pot! I'm becoming a collector (read packrat or hoarder) and not modeling!

Oh, and if anyone needs parts for an Atlas/Roco S2/S4 I just found a stash, motors, cabs, truck parts, handrails. Also some other Atlas Alco parts.

bnsf971 said:
Ray, I also have an older computer to run JMRI and Lokprogram on. In my case, it's a Dell XPS laptop. When new, it was top of the line, but that was 8+ years ago. I kept it on Win 7 until the first of this year when support for that OS ended, and upgraded to 10. That has brought on all manner of display issues such as you're describing. I finally wiped the drive, and installed Windows 8.1 on it, and the display problems stopped. It used the Win 10 license key stored on the motherboard to activate the older version. Windows 8.1 is still supported by Microsoft.
Click to expand...

The mini tower had a bit of a peculiar startup sequence to it, requiring the F1 key be pressed as part of the process, didn't automaticaly step from one part to the next, but uninstalling that Avast program seemed to be the start of it's current problem. It never liked that I wasn't using their browser as default. An 8.1 is probably a better choice now anyway for that continuing support. It was handy to be able to check up on other sites like this one while I was out there. Might check out the financial comparisons of doing as you did against another used machine with 8.1 already on. Thanks for the tip.

Sirfoldalot said:
IBKEN - good to here that you sorted your truck problem. Have to give credit - TERRY is a pretty smart guy! Now, may we see a couple close-up photos of the finished product?
Click to expand... 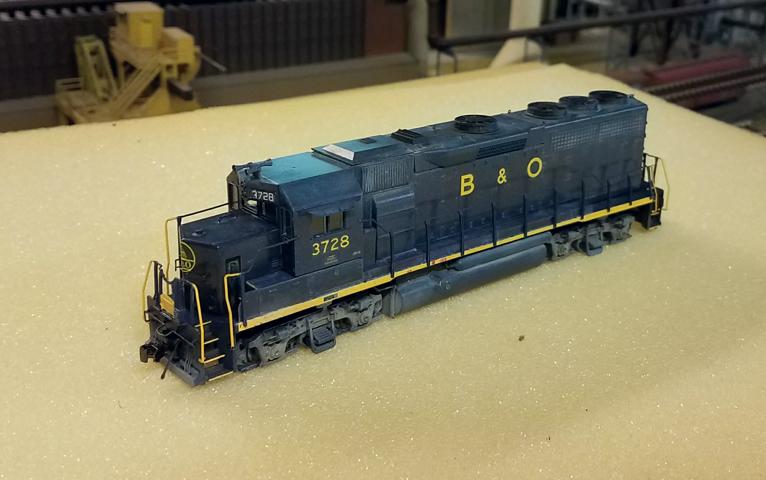 Well what a way to top off the weekend. The wife made home made Chicken n Dumplings like Grandma use to make she’s made them for as long as we been Married 23 years. Have a good evening 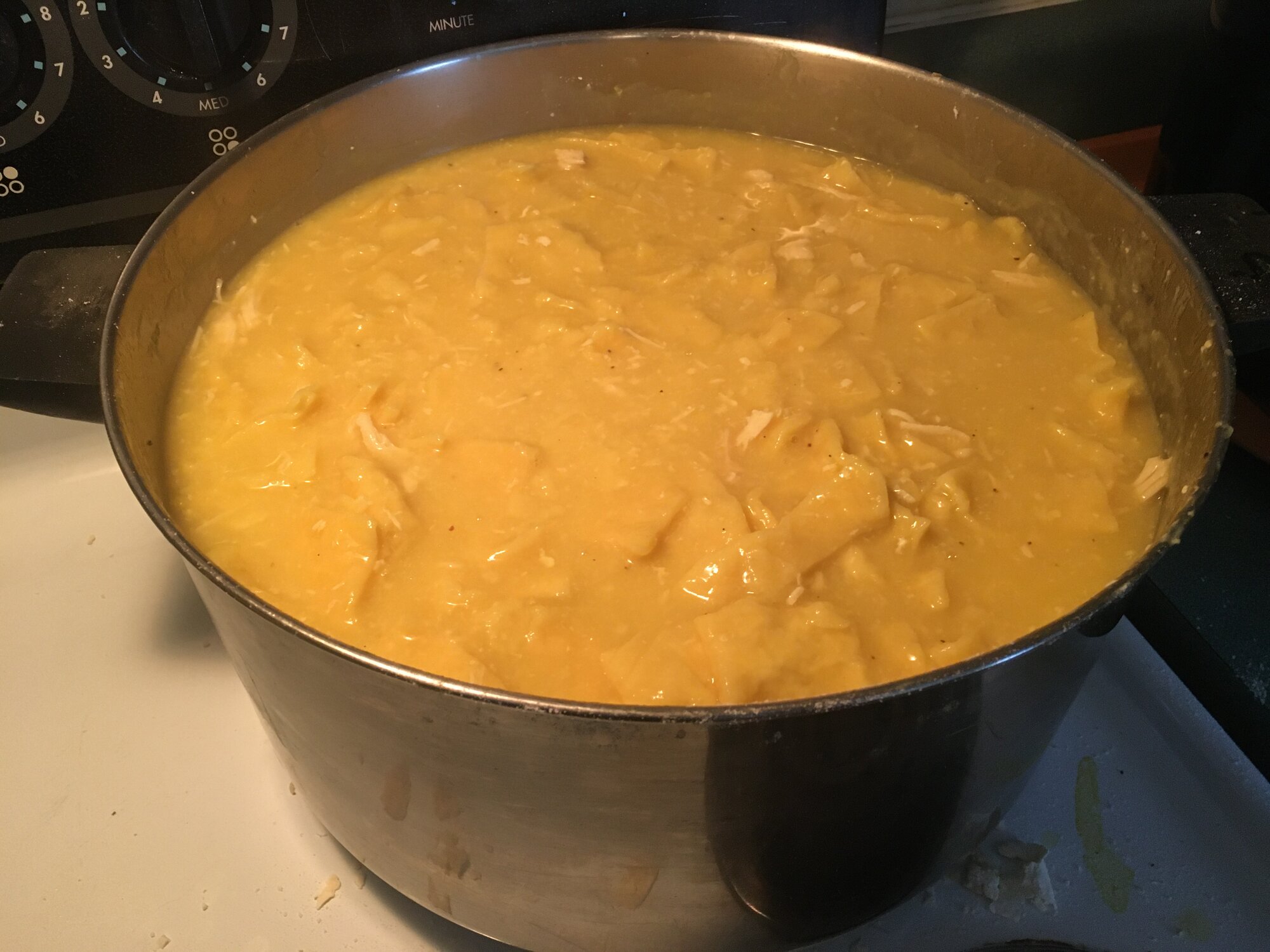 Now that the passenger cars are at least temporarily finished I got back to locomotive work. I painted that Santa Fe 2-10-2 that went through the blast booth a couple of weeks ago. It was covered up to keep the dust off and still had a nice profile, so no re-blast or prep was required. I just love how Scalecoat levels out when you bake it! Now I have an hour or two of clean up and removing paint from places where I don't want it (axle ends, wheel tires, frame slots for the drivers, etc.) then she can start to go back together. 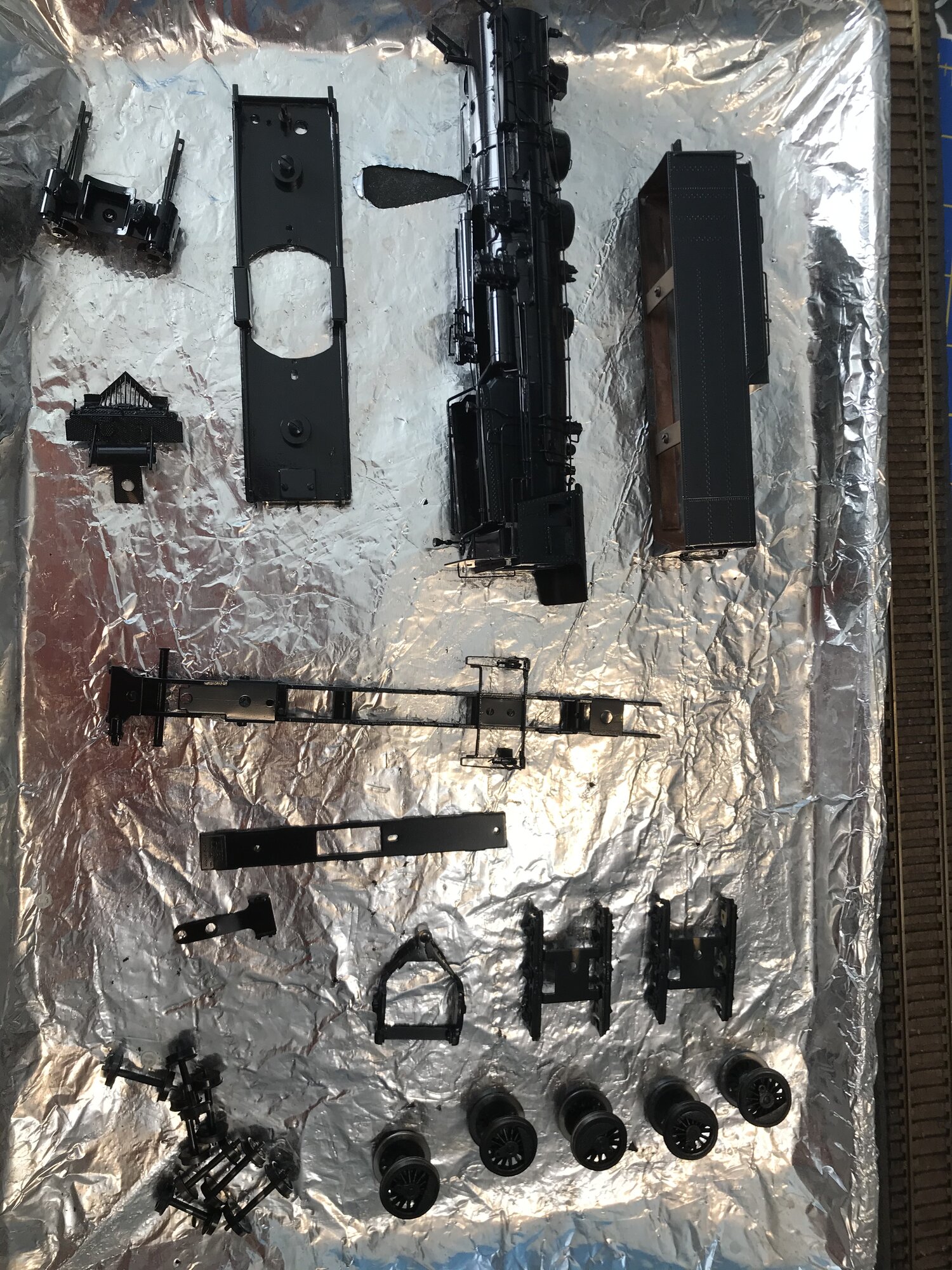 Your prototype looks very similarly weathered to one of my MRL SD35's, which I want to replicate. Getting that streaking down the angled sides of the roof and tank is not easy. Too thin and the paint just blends back together again and gathers along the bottom edge. Too thick and it is obvious that it is paint. Only on the trucks is it relatively easy. I did see a technique in a Tamiya magazine used on military vehicles using their clear orange acrylic spray paint to create the darker streak lines, airbrushed in light narrow stripes over the thinned gray. Sort of creating the effect in the reverse of how it would happen in reality
My prototype 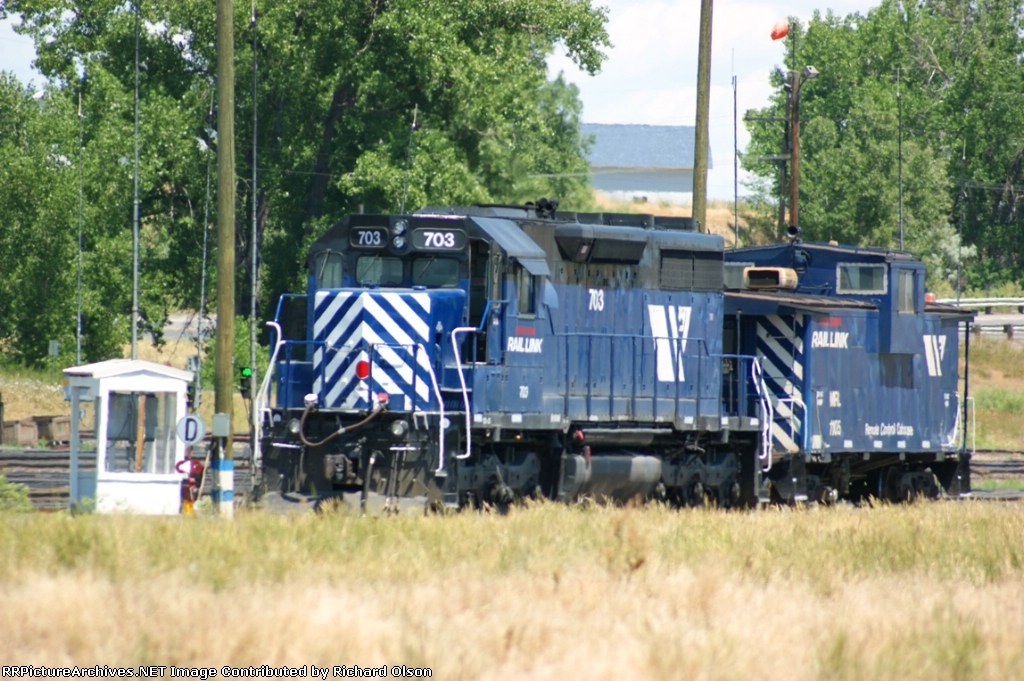 I remember some of you talking about steam cars a while ago.....

looks like Rapido is doing another run on these...

I've seen the various people of walmart websites and shots, but can't for the life of me ever spot such people in the wild. I visit Walmart regularly (several different ones) and have never seen those sorts of people. Nor did I see them in Cali or Florida or AZ or NH when we were visiting and stopped at Walmart. I guess I have all the bad luck.

Pic of the day that came up on Instagram. Yes, this is what you think it is: 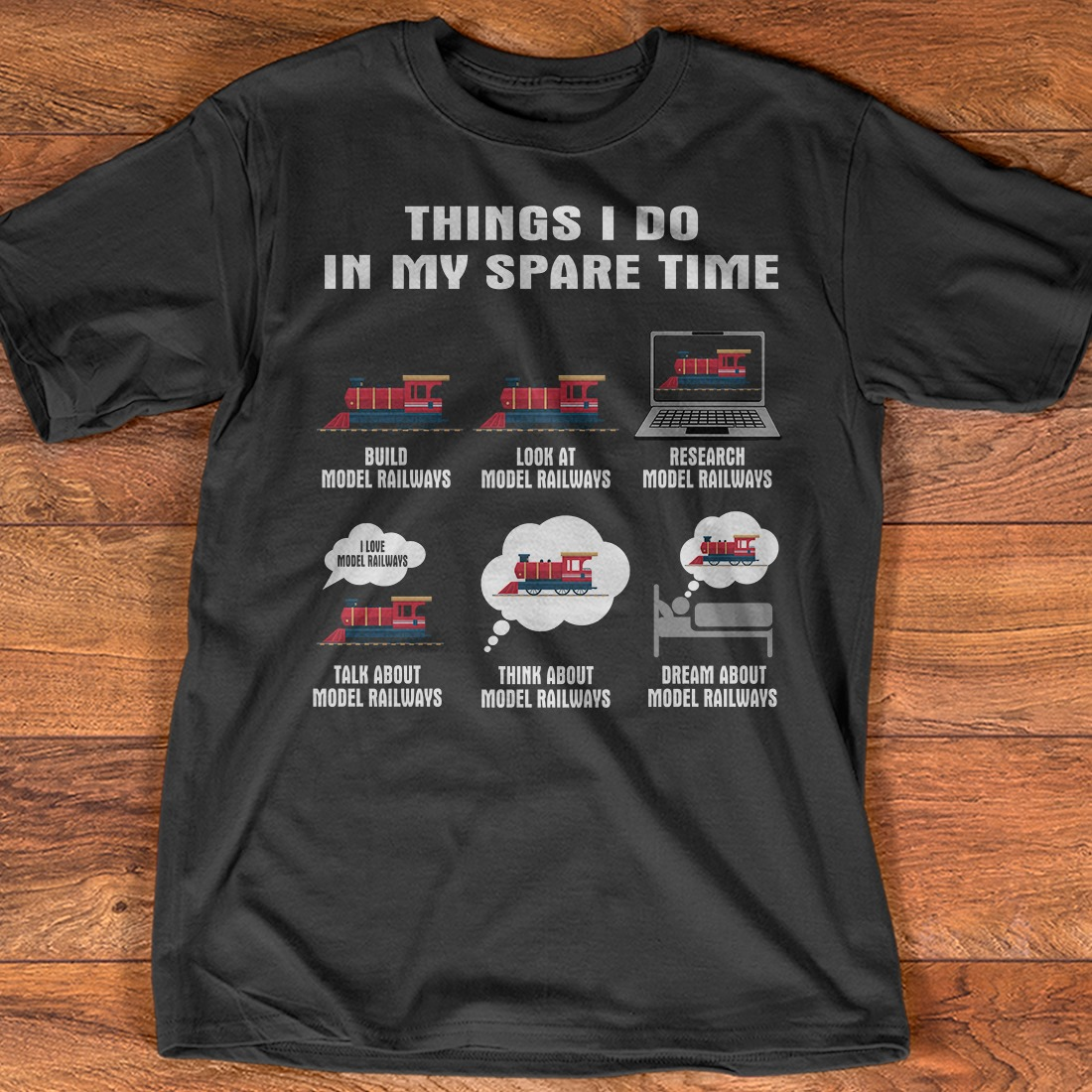 Just remember to keep your whistle whetted, then.

Good Morning. It's 5:00 am and 81° outside with what looks to be a minor thundershower on the way. Be back later.