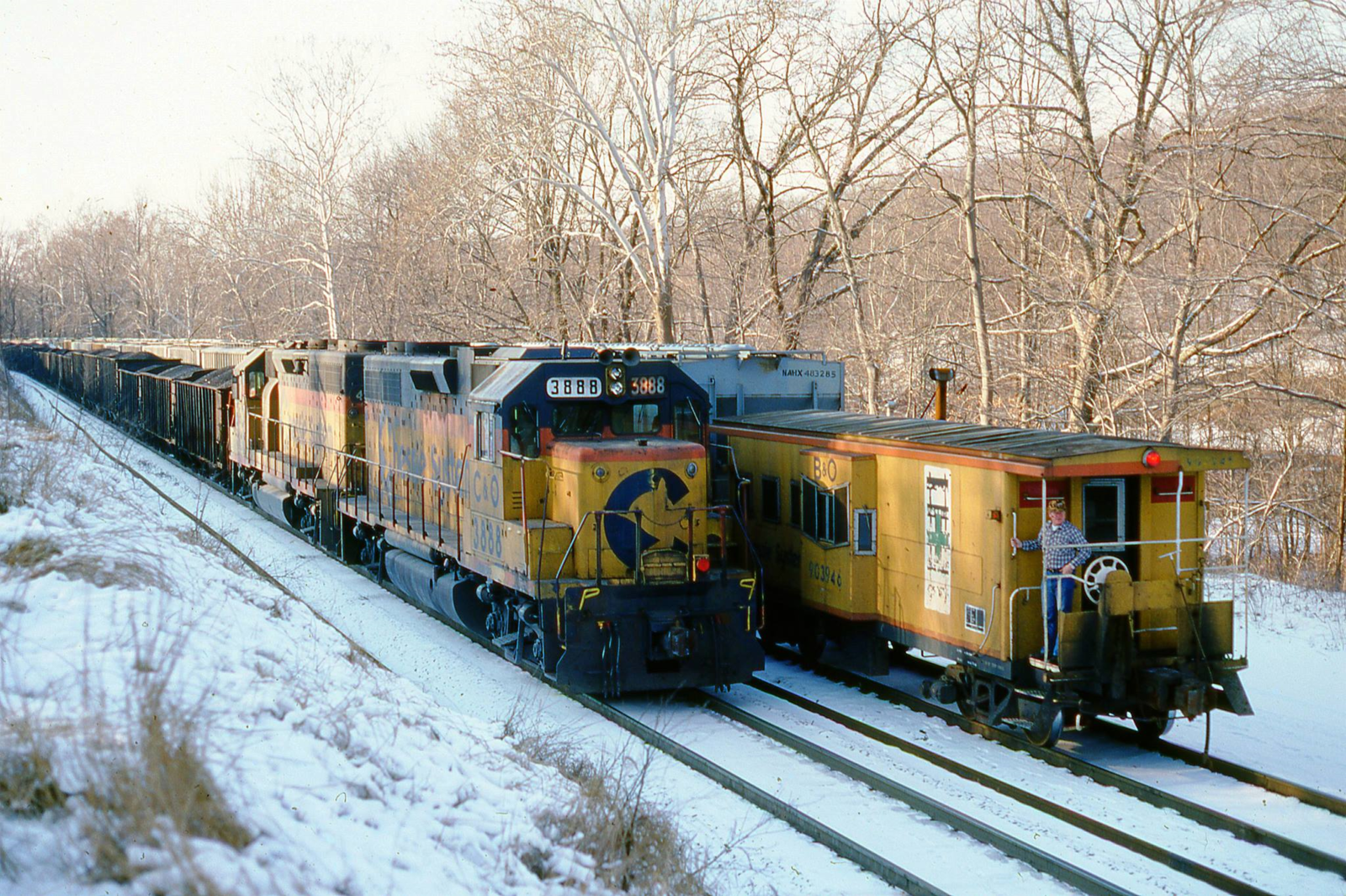 Baltimore Chapter, National Railway Historical Society
Video of the Cass debut of restored Moore, Keppel & Co. Climax #9, the subject of a restoration that stretched out over nearly 50 years!
https://www.youtube.com/watch?v=4lYE_Bgydlg 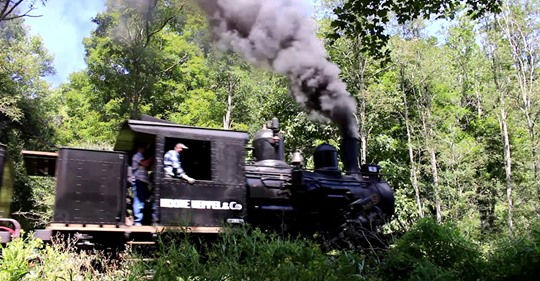 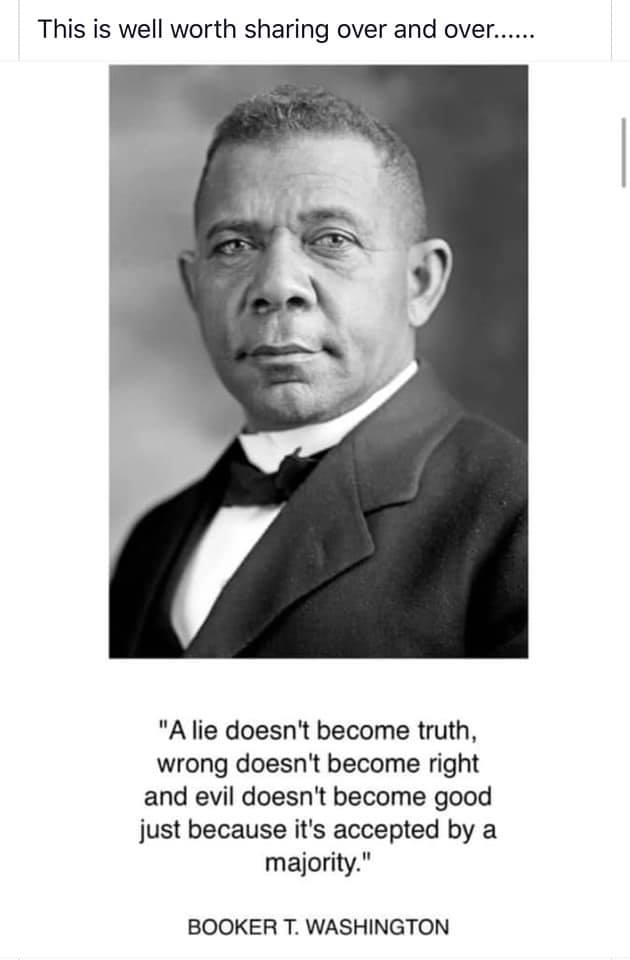 Kevin Kelly‎ - Steam Locomotive Photographs
Today in New Jersey history:
September 11, 1901: Delaware, Lackawanna and Western Railroad engineer John “Pop” Draney of Jersey City was selected to bring Dr. Edward G. Janeway, a New York physician, to Buffalo to attend President McKinley, who had been shot by an assassin. Draney recalled, “I ran that 395 miles in 405 minutes. We had a green light all the way and I went so fast the doctor rode all the way to Buffalo sitting in the aisle.” Draney retired in 1931 but remained active all his life, appearing as an eighty-nine-year-old panelist on the television show “Life Begins at 80” in 1950.
Septeber 11, 2001: In the September 11 terrorist attack on the World Trade Center twin towers in New York City, over 700 New Jerseyans died. A flight originating at Newark Airport that day was also hijacked as part of the terrorist operation. The hijackers’ plans to crash the plane in Washington, most likely into the Unocer ited States Capitol building, were ruined when passengers attacked them, and it crashed in Pennsylvania, killing everyone onboard. One of the leaders among the passengers was New Jerseyan Todd Beamer of Plainsboro, whose words heard over a telephone, “Are you guys ready? Let’s roll,” became a symbol of resistance to terrorism.
Photo: Draney an his engine. 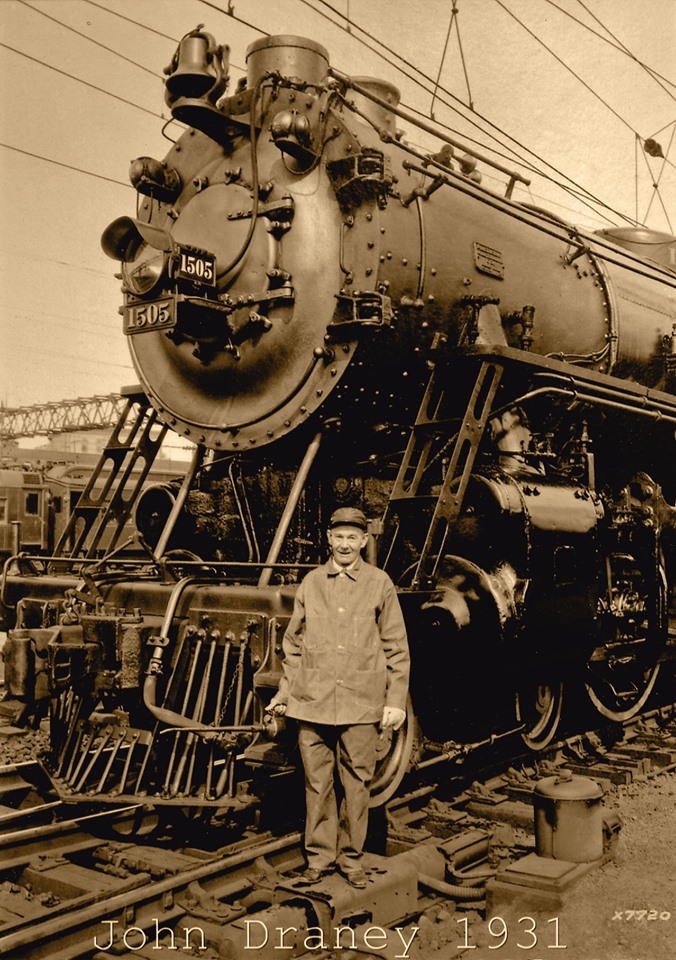 Marvin Anderson‎ - Amazon Flex Drivers
When the customer tells you to deliver it to the second floor..... 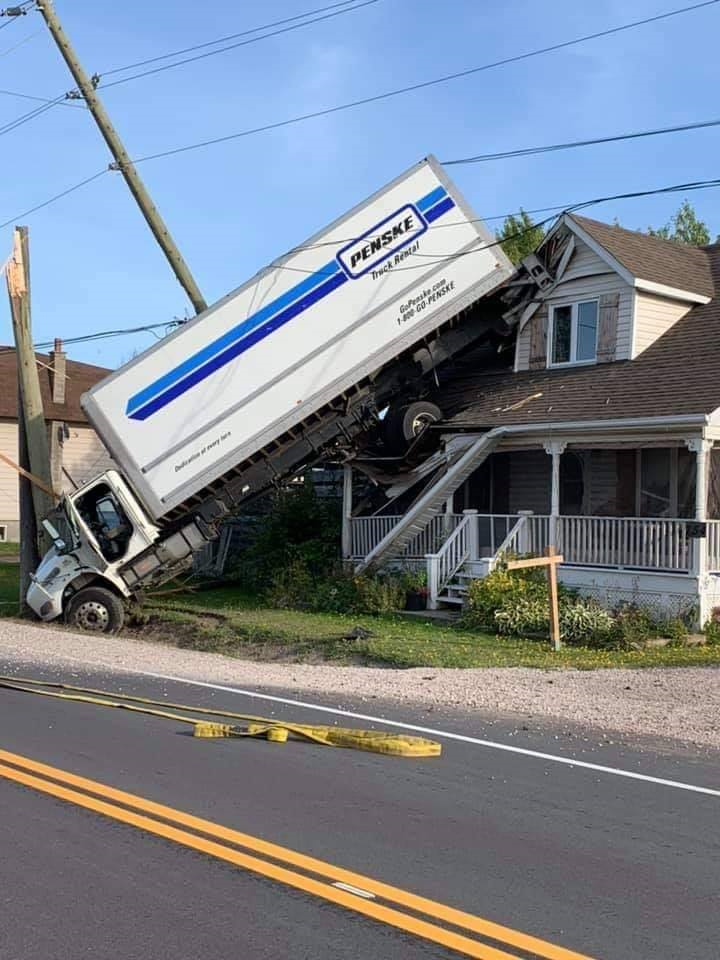 tootnkumin said:
We have the cure for that affliction. Ours goes Day/Month/Year. Today is 110919. Keeps it logical you see.
Click to expand...

You all are pretty much backwards down under. You drive on the wrong side of the road, start spring on September 1, and worship a monarch half a globe away!

Have time for a cup of Joe this morning. Thanks Flo...

Got the screws for the Athearn motor mounts yesterday and completed my repairs on the GE U28B Pacific Western BB model last night and ran it for about 30 minutes. It runs fairly smoothly and for a bit ran faster forwards than backwards. I still need to clean the wheels a bit more, but it does run. I only have $21.00 for the parts to fix a model with an original price tag of $22.00. I do have enough parts to do the same repair to 5 additional BB kits if needed, so it's not like I actually have the money only in that model. Next thing is to get some paint and work on converting it to the GN along with the SD-40 I picked up in a Santa Fe colors. The trick will be the SD-40 in GN colors as GN never had one.

I need to get back to the grandson's layout and wire the switches so he doesn't have to reach over to manually move switches. Then I need to get back into mine and get the second loop configured and wired. then start the rest of the modeling.

Good Morning All. 71° and clear skies on this hump day. Fall doldrums are here, temperatures between 71° and 95° for the next ten days. No rain in sight. Here in the Central Time Zone and westward, we'll have a Friday the 13th full moon this week. It'll look full to you Eastern Time Zone folks, but it will actually occur after midnight. Look out for the crazy people everywhere! Haven't had a nationwide one since 2000.
I'll take waffles and bacon this morning Flo, if you can tear yourself away from Louis's photo album. I know that they are interesting.
Spent another morning mowing yesterday, then it was on to household duties. Wife has stagnated in her recovery or at least she thinks so. Physical therapist says otherwise, the recovery is just not as pronounced.

Thanks for the likes and positive comments on the post yesterday; Sherrel, Patrick, Chet, Clint, Chad, Tom, Justin, Louis.
Looking about, here are a couple of pictures of random businesses on the layout. First is the Cut & Curl Beauty Shop. It is a Grandt Line section house that I have re-purposed. 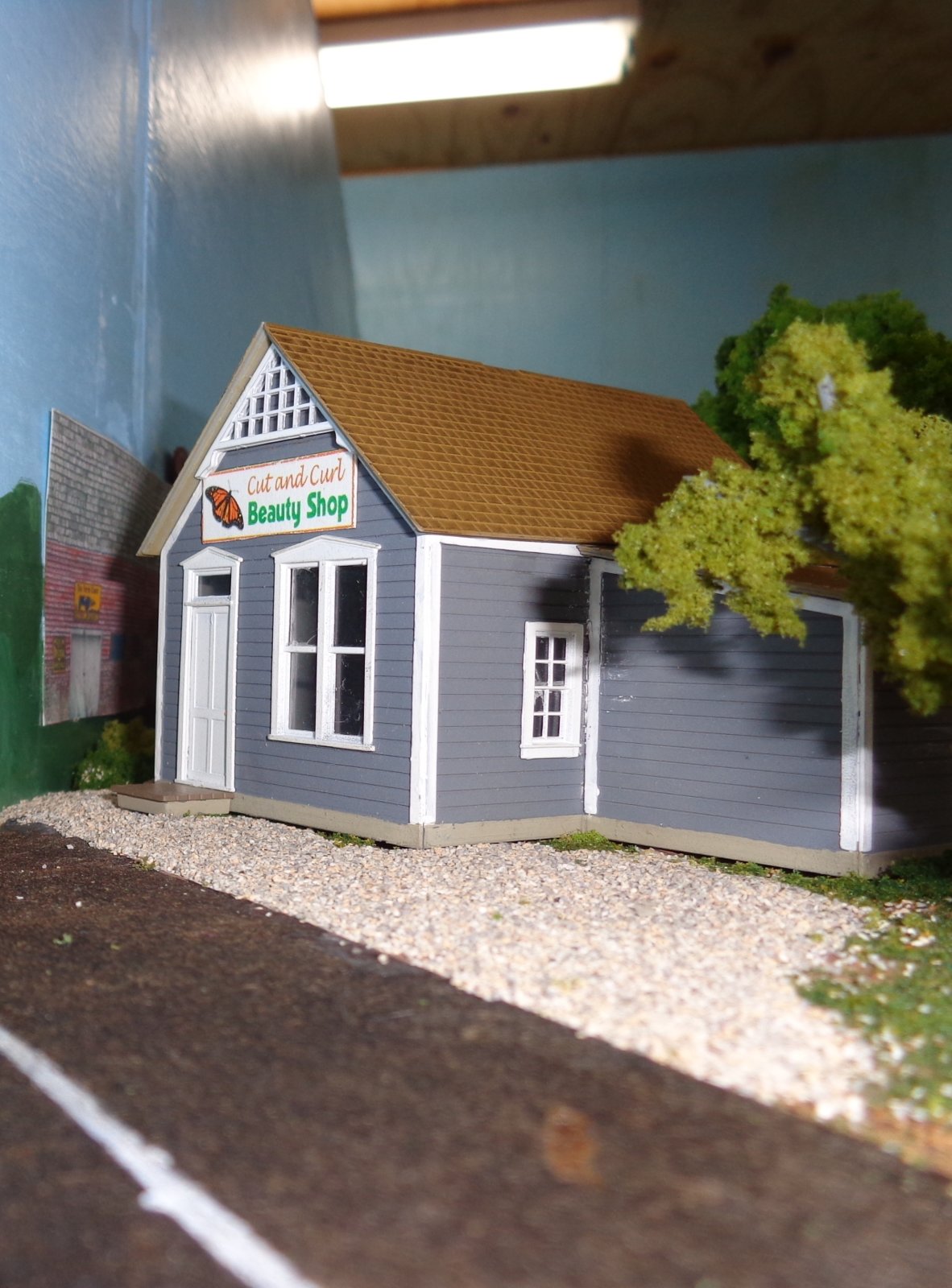 Next up is Joe's Radio. A small structure made from DPM walls. 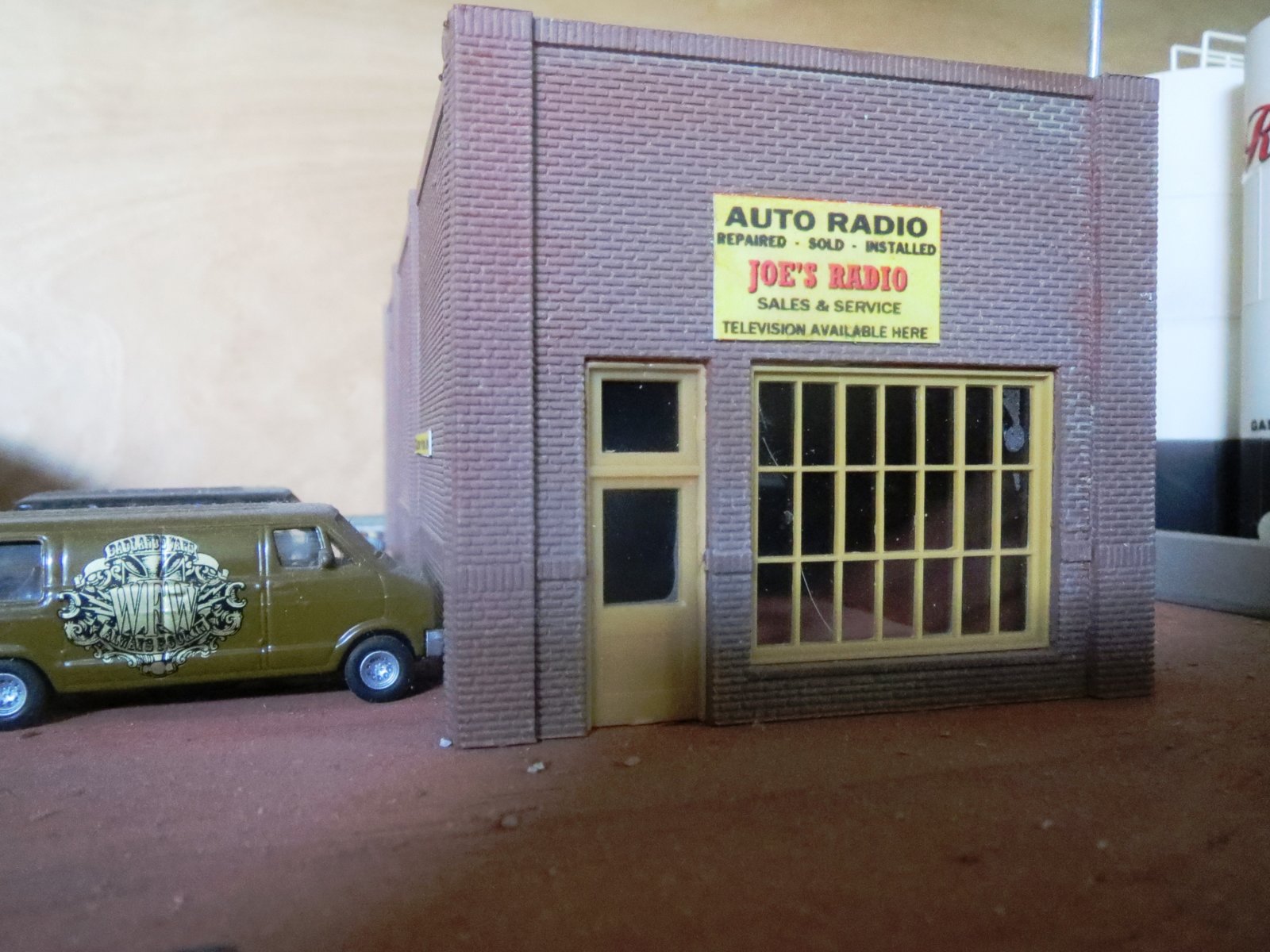 Moving on to the train shed, I randomly painted ties various shades of brown and gray in the current Maultown project area.
Had another run-in with a Polly Scale bottle and the Channelocks, less than favorable results. At least I got the top off! 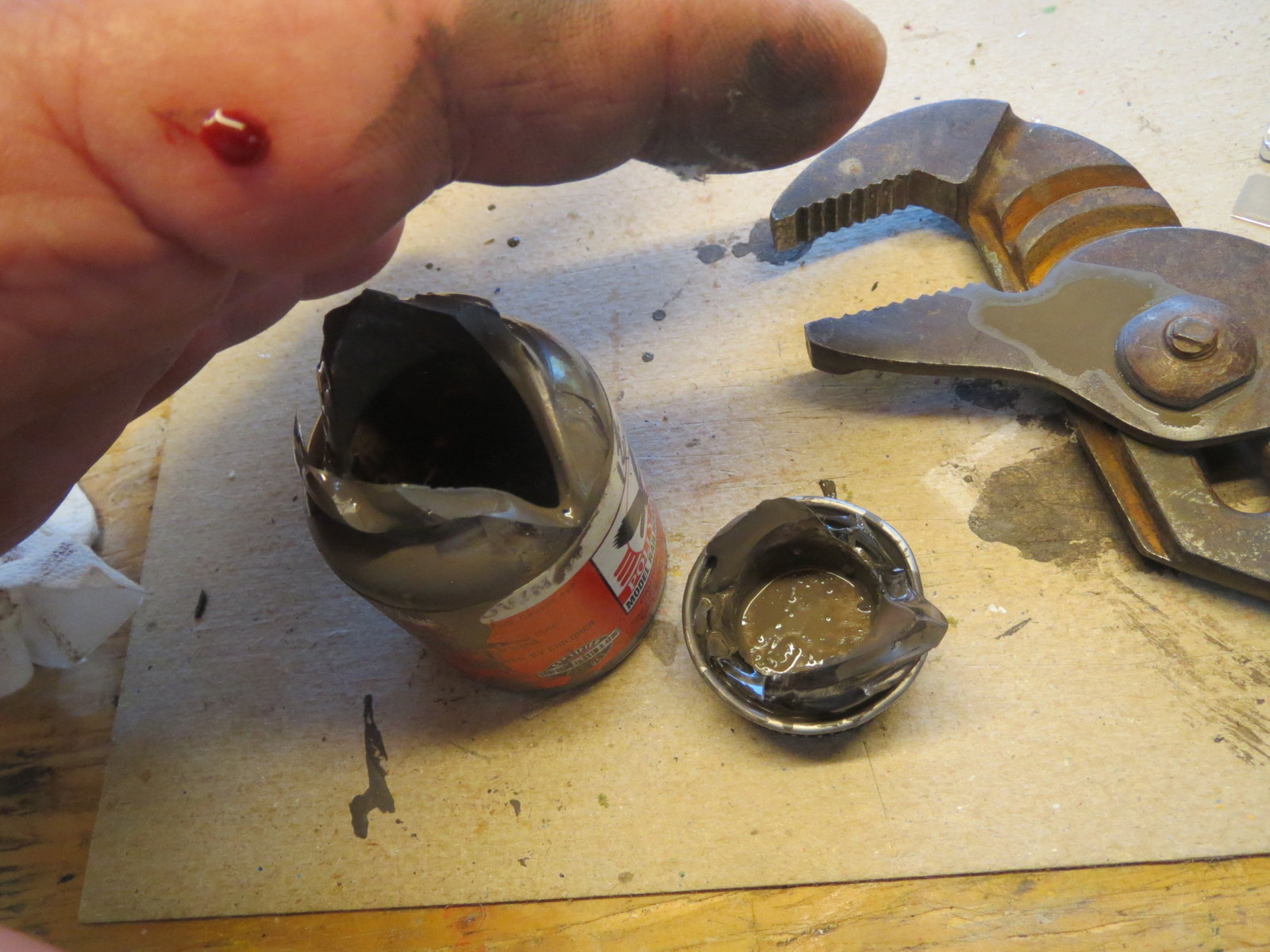 I was able to save the paint (purchased in 2004) in a leftover empty Testor's Liquid Cement bottle which I save just for this purpose.
Made a few more trees while I was in the mood, but had to cut my time short to be sure that the pool was still usable. It is but it's getting cooler, water is down to 80°.

Chet - I may have commented before that I like what you did with the stockyards. It is a shame that you weren't able to use the rest.

Of course today is Patriot's Day as Terry posted.

Everybody have a great day.

santafewillie said:
You all are pretty much backwards down under. You drive on the wrong side of the road, start spring on September 1, and worship a monarch half a globe away!
Click to expand...

Don't forget the upside down. Driving on the wrong side. Doesn't feel like it, couldn't imagine shifting gears with my right hand, especially through neutral. As far as the Monarch, when she passes, the push to become a Republic will be "on" in earnest.

tootnkumin said:
Don't forget the upside down. Driving on the wrong side. Doesn't feel like it, couldn't imagine shifting gears with my right hand, especially through neutral. As far as the Monarch, when she passes, the push to become a Republic will be "on" in earnest.
Click to expand...

My son keeps on asking about the safety harnesses (to keep from falling off the earth). What color is yours?

bnsf971 said:
When Chet and I were talking last night, we both commented on the similarity between it and your avatar photo.
Click to expand...

Yeah....great minds with awesome taste in locos and livery

Greetings from the great state of East Texas (Willie will understand)!!

We spent two days in Hot Springs Village, Arkansas, staying with family. Looked at potential retirement homes. Found one we like. Will keep you updated on that - no rush, but we are looking toward retirement. Now we're with relatives in east Texas, not far from the Louisiana border.

Haven't had a chance to read all the posts since last Friday. I do see Willie's photos from earlier today - too bad about that bottle of paint, Willie - been there, done that too.

I did get that barn structure finished before we left on vacation, but I can't access the photos right now. Will post another day.

Will read more posts as I get the time.
Have a good day everyone.

Good morning. 48 degrees and rain. Think summer is history. Went from 90 to 55 like it saw a state trooper. We could make it up into the 70's again by the weekend. Will probably put the hoses up for the winter.

Willie - I do wish that I had room for the rest of the pens for the packing plant, but as you saw, no more space was available. Nice photos.

Patrick - Glad you finally got the locomotive running. Does it have nickel wheels or the old sintered iron wheels?

Ray - I have driven in a number of countries that had right hand drive cars and after a bit of driving, I found that I had no problem. Just checked the tracking on my Walthers B unit and it shows that it is out for delivery. It will be nice to be able to pull a decent size train tomorrow at the club.

Gene - I had thought about repainting the RDC but decided to keep it as is. I like the war paint. Now I have to figure out if I want to install the gyrolight.

I did manage to run trains for a while yesterday being that the weather was crappy all day. Did a lot of switching with this little prairie.

I thought that was April 19th.

Here's a link for anyone interested in adding some interior detail to buildings.

montanan said:
Patrick - Glad you finally got the locomotive running. Does it have nickel wheels or the old sintered iron wheels?
Click to expand...

Beady said:
I thought that was April 19th.
Click to expand...

Today is Patriot Day, September 11th, In remembrance of 9/11.

Patriot's Day was April 15th this year and commemorates the first battles of the American Revolution. It was originally April 19th, but more recently it has been celebrated on the 3rd Monday in April. It is not celebrated in all states, mostly in New England. The Boston Marathon is run on Patriot's Day.

Bruette said:
Patriot's Day was April 15th this year and commemorates the first battles of the American Revolution. It was originally April 19th, but more recently it has been celebrated on the 3rd Monday in April. It is not celebrated in all states, mostly in New England. The Boston Marathon is run on Patriot's Day.
Click to expand...

When I lived in New England, and when so-called "tax day" was on the same Monday (or the weekend before so extended to that Monday), we got an extra day the rest of the country didn't get for tax filing deadline. This was due to the regional IRS center being in Andover MA.

Alas, I no longer live in New England and also they've rearranged the IRS service centers and the policies so this peculiar occurrence does not happen any longer, Patriot's Day or not.