I have actually ended up with 3 of them...somehow?

I got all 3 of them out today, and was trying to recall the history of how I ended up with 3?,...and which ones had what modifications??

If I recall correctly, I purchased 2 of them from Peach Creek Shops when they were closing. They were both brand new, and came with the stock 'DCC installed',.....just motor control, not sound.

I burned one of these up when it stalled out on a Shinohara double crossover during some turnout experiments I was working on Subsequently I was visiting with a gentleman south of me who promised to show me some introductory work on DCC installations,...and to sell me a few of his surplus (used) TSU 1000 decoders at a very attractive price. We replaced the burned out 4-8-4 Bachmann with one of those TSU 1000.

While we were at it I replaced the second new loco I had with a TSU decoder as well.

That left the 3rd one of those engines that I believe I bought thru the mail (craiges list or something) a few years ago. It came all packaged up as a new one would be, so I'm now thinking I must have never removed it from it box and done a thorough inspection?...strange??. Why do I say this? I unpacked it today and noticed it was missing the one, rear most wheelset on the tender. I then decided to open up the tender and do an inspection on its interior. This is what I found. 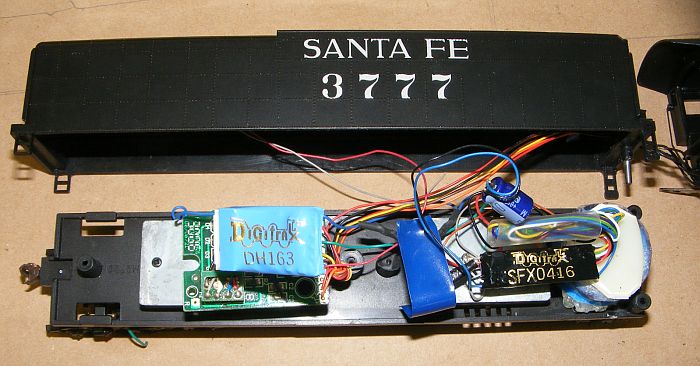 My question at this point is can I run this engine on a DC track (not DCC) without problems, or burning something up? In other words is this a dual mode decoder setup??
B

I was taking a closer look at that 3rd Northern to see if I might find out whats wrong with it,... I got some sound, but no motion.


I pulled the components further apart for these next 2 photos,..

...and I marked the 4 wires that I have questions about. It appears as though the sound decoder is hooked in with current pick-up wires from the tender's wheels,..those 2 with the shrink wrap on their ends.