Help Me Plan My Layout

Here is a good youtube video on Electrro vs Inso frog turnouts. It also addresses the steps on how to adapt a Peco Electro frog turnout for DCC use.

Staff member
It's not all that difficult if your soldering skills are OK, just need to read it a few times, The addition of what looks like unmodified ones in each photo confuses it a bit. Do a search on youTube, there's some instructional vids on there too, Here's one I thought was good

In this one he shows it can be wired up as a standalone piece of circuitry, connected to the buss wires so none of the turnouts tracks rely on contact with any other trackwork, but the essential thing is that the 2 tracks that extend the frog are insulated by gaps.

Staff member
Ah, we've both been doing the same thing, yes there's plenty of info on there. Getting an accent you can understand is sometimes the hardest part. One of the most confusing things about DCC, is though wiring follows DC polarity conventions to a certain amount, it is actually a different wavelength and is the reason DCC decodered engines can run on the same track in different directions and he talks about track 1 and track 2 rather than positive and negative. Short circuits still happen as well as other similarities i.e. reversing circuits, but in the case of turnouts as you can see, it's different. The Peco Electrofrog as it's produced for DC, will short on DCC. Just don't ask me why.

I have 2 electro-frog that I accidentally ordered and using them on the layout. I took a picture of the back of the package so you have the instructions . ( these are code 83) Also I snapped a picture of my Caboose Inds. Throws. I painted one side green and one side red so that you know when they are thrown. Don't be too critical I will do some final detail to them.

I think I have 10 tortoise switch machines and 2 of the Digitrax control boards that let you control them by DCC . I have to get the Part number for you. They all work fine because they were used very little on my old layout. I know you may have to get some piano wire if they are not long enough for you switch mounts. They sell them on their site. If you are interested I'll figure out a good price for you. 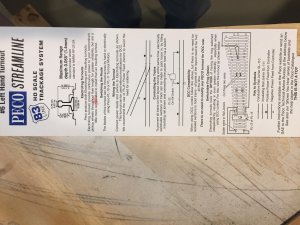 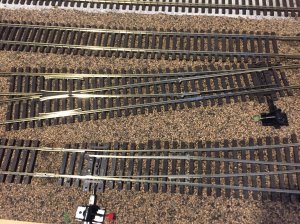 Thanks for the pics, I just ordered some of the same switches you have shown the package of. The manual throw switches will work well for you. Many of the turnouts on my layout are not within easy reach....... And down the road I want to leave the option open for a computer operated layout.

I am definitely interested in your tortoise switch machines and the Digitrax control boards. You can send me a PM with the price.

Can the bullfrog switch controllers be used with DCC or they only work with manual operations?

What about doing a controller yourself with a servo?

Maybe a little off topic but I was lead to these questions so thought I would throw them out.

I took a quick look at the Bullfrog switch machines. They are manual switches, but could be used with DCC, but not controlled by the CAB or an electric switch.

I like the tortoise because it can be controlled by the DCC CAB with the addition of a decoding device connected to it, and has leads that will also activate LED signal lights on the layout and at a control panel. Ultimately I may choose to go with a computer controlled system so I want to build in the foundation for that and the tortoise switch machines are a part of that foundation.

Photo Update:
Most of the cork sub-roadbed is down. Ordered some track and turnouts this weekend. Then I got a great deal from Eric on some Tortoise switch machines and other goodies. So there will be more progress to come. 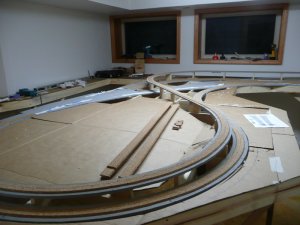 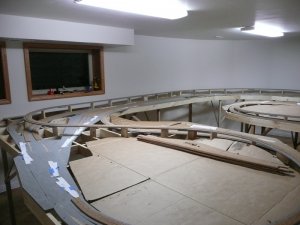 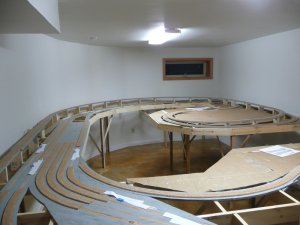 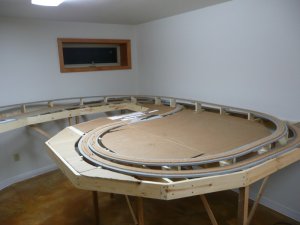 yeah, I mean this isn't golf, its Model Railroading.

More questions for the layout experts:

The first one has to do with how I set up the two reversing sections on each end of the layout. I get how to do it with a simple single line that loops back on itself. But my layout is a little more complex as it involves some double track loops and more than one route between the loops. Specifically, where do I put the isolating track connectors on each end of the layout? I have poorly drawn in where the inside loop on the right side of the layout connects with a turnout to more closely depict where that happens on the layout. 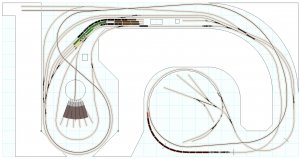 The next question is about how many and where do I create the individual detection blocks in preparation for a future computer control of the layout. See posts #207 and #209 for reference.

Thanks for the input.

Really nice work
Don't know why I haven't seen this thread up to now, but now I'm up to date.
Now I'll be following it, again very nice work.

Really nice work
Don't know why I haven't seen this thread up to now, but now I'm up to date.
Now I'll be following it, again very nice work.
Click to expand...

Thanks, I have had a ton of help from the good people here.

I received the switch machines and circuit boards today. It will be a while before I can get it all installed. But I will certainly keep you updated on my progress.

Thanks for the great deal.

gjohnston said:
Thanks, I have had a ton of help from the good people here.
Click to expand...

I was showing the carpenter who helped me the pix of your bench work and for what it's worth, he approves! Looking really good!

Good luck with that track plan, I can't help you there, I just do loops, off loops, in loops, off loops with a loop off the end and a siding or two, or five. Nothing as complex as that wee beauty you got there!

I am getting excited about how the layout is coming along!!! All of the cork roadbed has been layed on the main lines and I am ready to start putting down track. 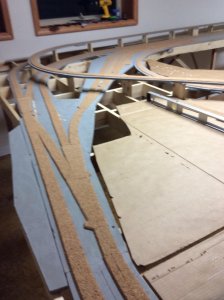 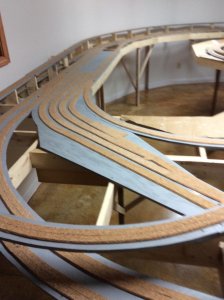 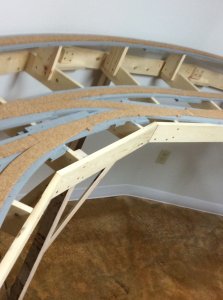 The next big decision is what type of DCC operating system to get. I was leaning towards the NCE PowerCab, but then started looking at the Z21. I like the visuals you get on the tablet with the Z21,and it seems to be more intuitive to program locos, turnouts, and other DCC features. I also like the visual representation it gives of your layout with the turnouts and their positions. I would not need to build a control panel, it would be right on the iPad or smart phone. You can also add a conventional throttle cab if you want.

I do not have a Z21 but it will be my next DCC system based on what i have read. Consisting and speed-matching methods really impressed me and sold me on this unit. Furthermore if you prefer a traditional throttle if i am not mistaken, roco will release a multimaus wifi as a throttle and i think the Z21 works with other throttles as well. I think when the time comes i ll use a multimaus as a throttle and a tablet as the main programming tool.

GREAT progress on your layout. I use the NCE PRO cab and really like it. I had DIgitrax and it had its advantages too. The NCE , for me, was easier. I will look into the Z21 also. I know the procab already has a computer connection so you won't have to buy that extra.