Hi, all! Could someone please explain the differences between a double crossover turnout and a double slip turnout ? Pros & cons?

Having recently retired, I'm building an HO-scale around-the-walls shelf layout in my basement. As I lay out the track I'm approaching a place where 2 parallel tracks go in & 2 parallel tracks come out. I'd like to route trains to either path in both directions, though space is a little tight. I plan to have switch machines with whatever configuration I use. Thanks!

While a double slip saves a lot of space, a double crossover is only available in #6 turnouts which makes kind of a tight curve.
Double slips are kinda hard to understand as far as where your train will go unless you use turnout machines and a lighted board to indicate your path. Double crossovers are a bit easier to see your route.

The video here is a double slip.

A double slip turnout has four possible routes, two in one direction of movement. It also serves, however, as a crossover, not just a turnout that deviates. A double crossover is just that...but also has only two possible routes in any one direction of travel. If you take the deviation on a double-crossover, you must go on to a parallel route. A double slip allows the person to take the next parallel route, or to cross over it and move to a third track, potentially.

A double crossover is a much large appliance with complicated trackwork at its crossover, or diamond. It requires four simple turnouts, whereas the double slip only requires two. 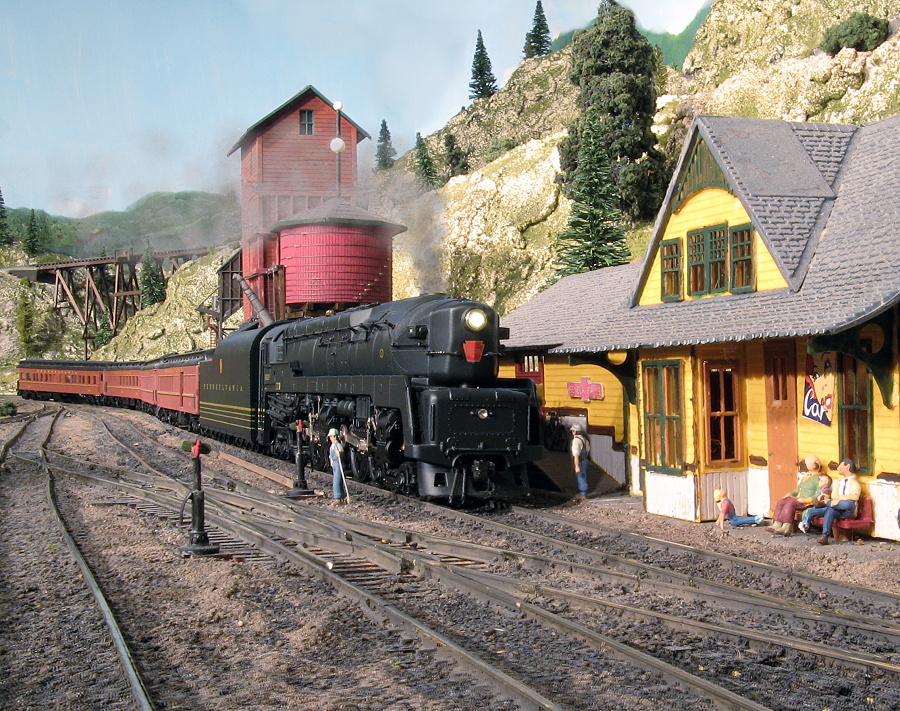 For a case where you have two tracks in parallel you want to use a double-crossover OR you could use two single-crossovers "back to back".

A slip switch is more suitable when you have three or more tracks and want the greatest flexibility in moving from one track to another.

Thanks to all who answered. Very helpful.

AJay said:
Hi, all! Could someone please explain the differences between a double crossover turnout and a double slip turnout ? Pros & cons?
Click to expand...

With a double crossover trains can go straight through on parallel tracks, or cross from one to the other. With a double slip all trains must pass through the unit to get to either one of the other tracks. A double crossover is much easier to route trains through without having to think too much. Even after years of using double slips, I have a hard time looking at a one and knowing where my train is going to go. A double slip is usually used when on track is crossing another - and oh by the way - it would also like to transfer onto the track it is crossing over. As you already alluded to a double slip would fit into a more narrow space.

As I lay out the track I'm approaching a place where 2 parallel tracks go in & 2 parallel tracks come out. I'd like to route trains to either path in both directions, though space is a little tight.
Click to expand...

That sounds like double crossover since you have parallel tracks.
Last edited by a moderator: Jan 30, 2018

Staff member
Here's a video of the relationships you would find where a diamond crossing is employed, as well as double slips.

The double slip is little used by prototype North American railroads where linear space for trackage is less of a problem. It takes a lot of maintenance. You might find it in cramped passenger terminals where the throat trackage with multiple passenger platforms and/or routes are required but not in most situations where there is usually space for a full crossover or even more likely a pair of single crossover tracks. Modelers usually have space problems and so may need to resort to the double slip as a means of cramming more track into their confined layout spaces.

The double slip (and single slips) were used much more by European and in particular British railways. This is the reason you find the double slip in the PECO Universal/Code 75 and Bullhead Rail lines rather than the US oriented Code 83 track line. Space in Europe was at a premium even in smaller towns.

Ken brought up some good points about the usage of double crossovers and double slips, but unfortunately we have lot less real estate in our model railroading world. In order to make things "fit", I ended up with a double cross over at the entrance to two yards in order to make operations work the in limited space. 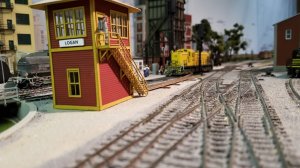 In this yard I also had to use a double slip switch just past the locomotive at the sand towers in order to cram in all of the trackage I needed. I also have a double crossover at the entrance to another yard.
F

Peco is now offering a double-slip in the American style Code 83 line.

So far as HO scale Code 100 double-slip turnouts are concerned there are actually two types. Years ago, Atlas made one that allowed a train to run through it as follows: Think of a crossing in the shape of an X, with the points labeled clockwise A, at the lower left, B, upper left, C upper right and D, lower right. The old Atlas double-slip could be set so a train goes A to B or B to A, and at the same setting, a train could go from C to D or visa versa. If the switch was thrown the other way, the train could go A to C (or the other way) or D to B, as a crossing. Regardless which way the trains ran, they would NOT derail. The points were controlled by an integral switch machine powered or manually. Other double-switch brands required two separate switch machines, and depending on the route selected, the points on the alternate routes were set against a train coming through the turnout, causing a derailment. Not sure about PECO, but Shinohara definitely works that way. Unfortunately, Atlas no longer makes their double-slips. Fortunately for me, I have one that makes it possible to select one of three tracks in a close space.

I had a double slip and removed it. I think their to unreliable. The double crossover I have works perfectly. I would go with the double crossover which is pictured Montanan photo. I did had to add a little nail polish to the insulfrog to expand the insulated area.

Thanks again for all the replies -- and fantastic photos! It sounds like I should use a dbl-xover if there's room, otherwise the dble-slip. I'll have to download 1:1 templates for both so I can literally see if they fit. I'm trying to shoehorn it between the spot where two tracks on 2% grades converge to the same elevation, & where a 90-degree curve begins for both tracks near the backboard.

In terms of reliability does it matter whether code 83 or code 100? My layout is a mix of both, but I have 83-100 transition tracks if necessary.
F

AJay said:
Thanks again for all the replies -- and fantastic photos! It sounds like I should use a dbl-xover if there's room, otherwise the dble-slip. I'll have to download 1:1 templates for both so I can literally see if they fit. I'm trying to shoehorn it between the spot where two tracks on 2% grades converge to the same elevation, & where a 90-degree curve begins for both tracks near the backboard.

In terms of reliability does it matter whether code 83 or code 100? My layout is a mix of both, but I have 83-100 transition tracks if necessary.
Click to expand...

If you have just two parallel tracks you need a double-crossover OR two single crossovers.

A slip-switch (double or single) really only makes sense if you have three or more tracks.