Just finishing up Crown Crate and Tucker Brothers Machine Shop and I think it's time to tackle Tylick Tool. I've learned many things on each previous structure build and I think I'm ready for this nasty looking build.

I bought this kit a while ago - I pretty much fell in love with it when I saw it. I even designed a spur on the layout specifically for this industry. But I knew I wasn't ready to build it. Now I think I am.

The first order of business is to glue corner posts and bracing on to the wall sections. 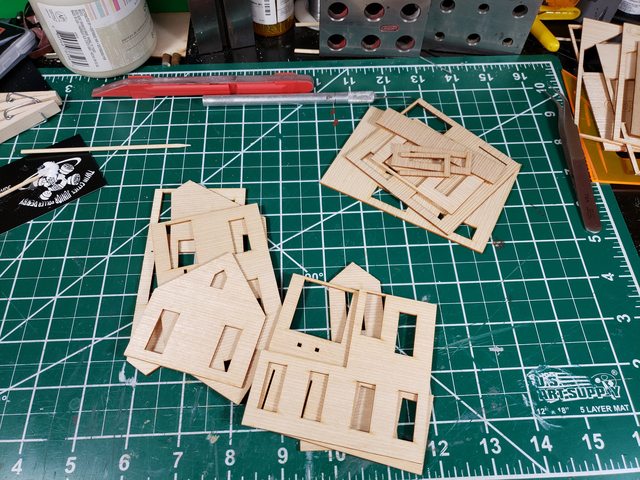 It's definitely a Bar Mills kit. I just started gluing the corner posts onto the wall sections and discovered that none of the pieces they provided are quite long enough for two of the corners. Luckily I have some material in my pile of strip wood that will suit.

Should be a very long and entertaining (and probably frustrating at times) build. 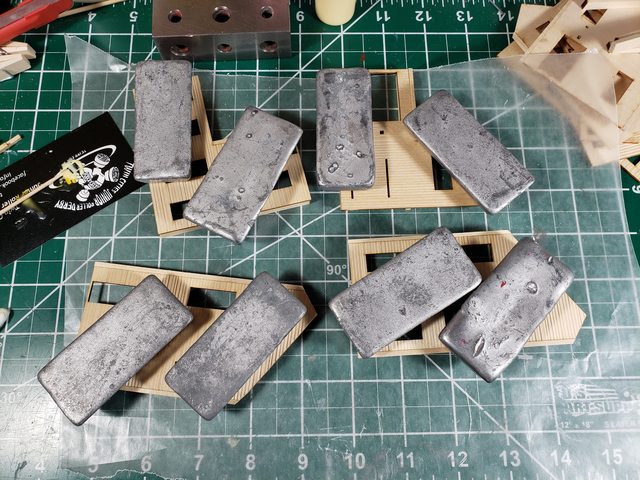 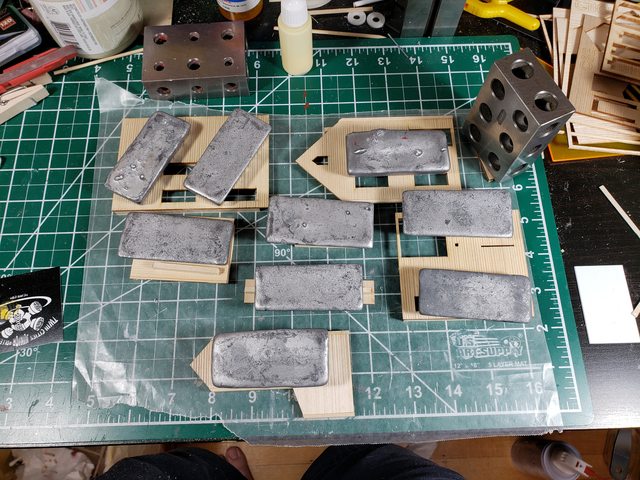 Tomorrow I'll start painting the walls. I bought some light green spray paint and I have some darker green for the window frames. I'm becoming a fan of spray bombing my kits. I have a nice airbrush, but thinning the paint, testing it out, then cleaning up the airbrush is just a bunch of work...
I

Have you considered using india ink washes? I did this for this build: 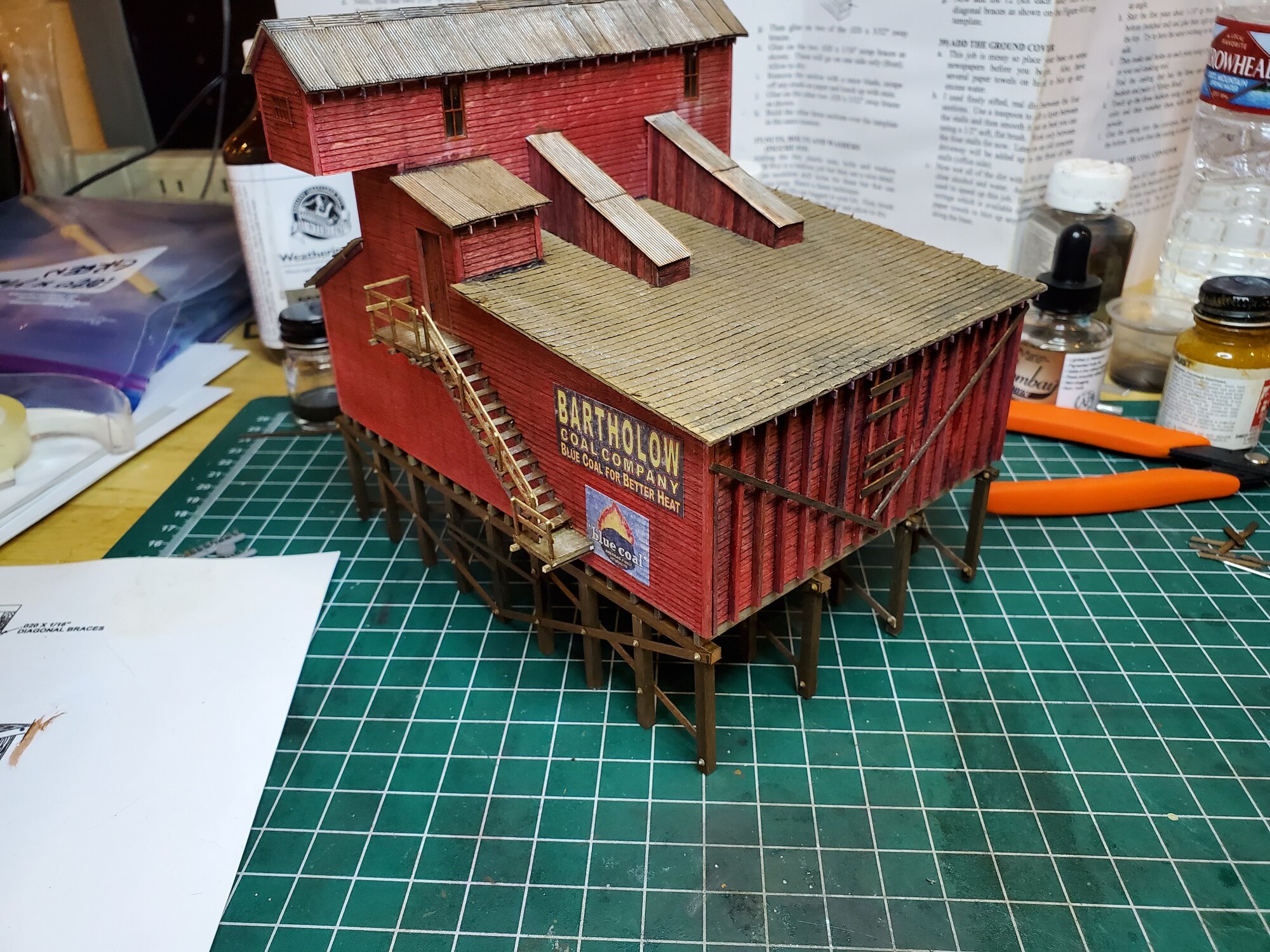 I will probably do some ink or paint washes. The main reason I don't use india ink washes is because I usually paint with acrylics and the alcohol in the washes dissolves the paint. I have had some success with diluted acrylic washes. And putting clear coat on the acrylic before ink washing is an option, but adds more steps of course.

Edited to add: That coal building looks really great!
I

Thank you! This was my first go at using AI washes on a craftsman (wood) kit. I really like the results, so I've been doing the same on my current build.

Started painting today. Got the walls and window frames painted. 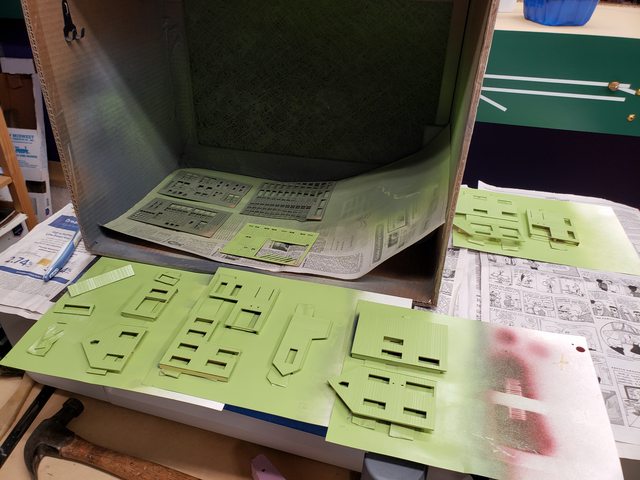 Going to do a wash and some distressing on the walls.

Also got the concrete bases assembled and painted. 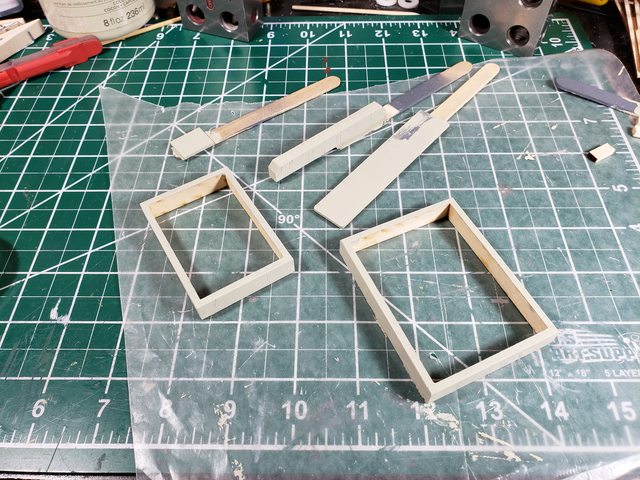 I also tried making custom decals for this kit. It came with a printed piece of paper that had all the signage on it. It was suggested that you sand the back to thin it out and then glue it to the wall. I know this is an accepted way of doing it, but I've never done it that way. The first thing I did was scan the image so I could make copies of it. Then I printed a copy on my laserjet. I started sanding the back, but then decided that was kind of a pain in the butt.

I recently bought some clear and white decal paper from MicroMark and what better time than now to try out the white paper? I had made some decals on the clear paper for the Western Crate project and they turned out okay, so I figured I'd give it a shot.

The first thing I did was pull the image into Gimp and play with the levels a little so it was actually black and white. Then I cleaned up all the little speckles that you get when you scan.

Printing it on the inkjet was a little frustrating. The ink worked better on the clear than it did on the white. The printing came out more brown than black and had color graduations in it. It didn't look great. I actually printed it twice with different settings and it came out about the same. The brown was pretty dark so I figured what the heck and hit it with some clear coat to seal it.

When I started applying the decals the ink started running, even with the clear coat. I think the fact that I trimmed right up to the ink let the water under the clear coat to dissolve the ink. I actually applied several of the smaller decals and had about a 50% success rate. Then I made a major error and installed the really large decal. It went on okay, but when I started applying MicroSol the ink really started running. Darn it (stronger words were said.)

Then I thought "the image is black and white, the decal paper is laser compatible, laser toner doesn't run..." So I printed another set on the laser printer. They look pretty good even thought it's only 300 dpi. 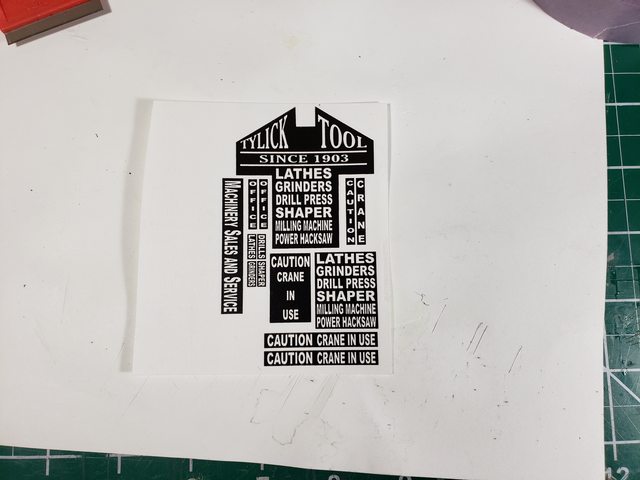 While that was drying I started assembling the windows and doors. There are a lot of windows in this kit. They did come up with a slick way to apply the glazing to most of them - the windows are self-adhesive and all in a row, so you can peel off the backing then stick down a strip of acetate and then cut them all apart. That was pretty slick. But you can only go so far before you have to start sticking them into the walls, and the walls are far from ready for windows. 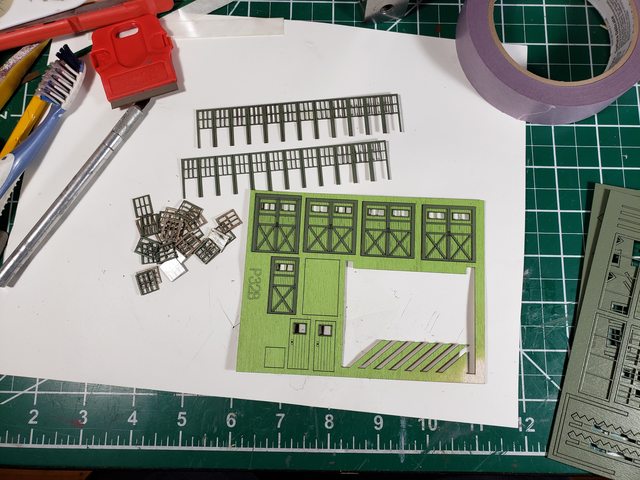 The peel and stick assembly does work pretty well. I hope the adhesive stands up over time.

Wow, that got long. Thanks for reading.

More window work last night. Installed the acetate in the upper sashes then started marrying the two sashes together. 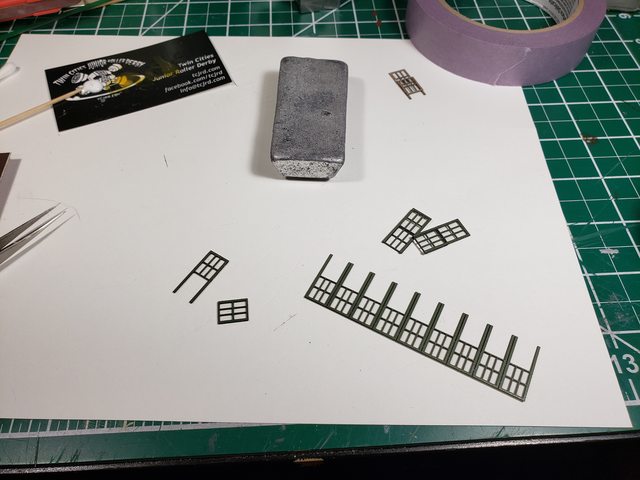 I made half the windows closed and half open various amounts. 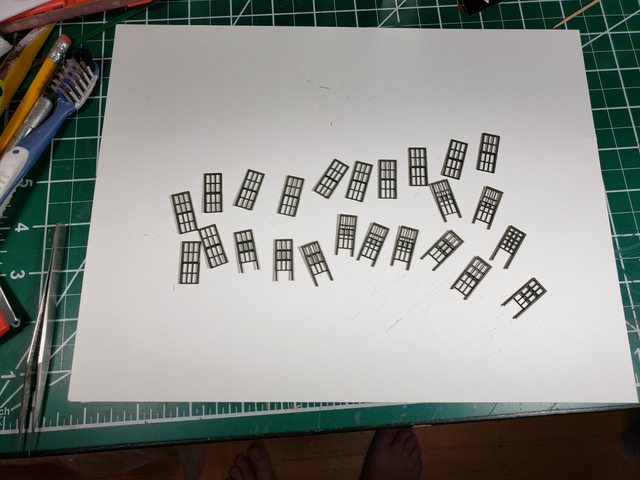 I'm not going to apply the frames until it's time to install them because the adhesive on the frame is what glues the window into the wall.

I also applied a few of the new decals I made on the laser printer. They are black, but there is a different issue with these - the printing chips off the paper at the edges when I cut them out. I think I'm just going to use them anyway and call it "weathering" but it's pretty annoying. No pics of that yet.

I went ahead and applied a bunch of the decals. I guess they will look okay, but I'm not super happy with them. Then I decided to glue the walls together before weathering. So here are a couple of photos of that. 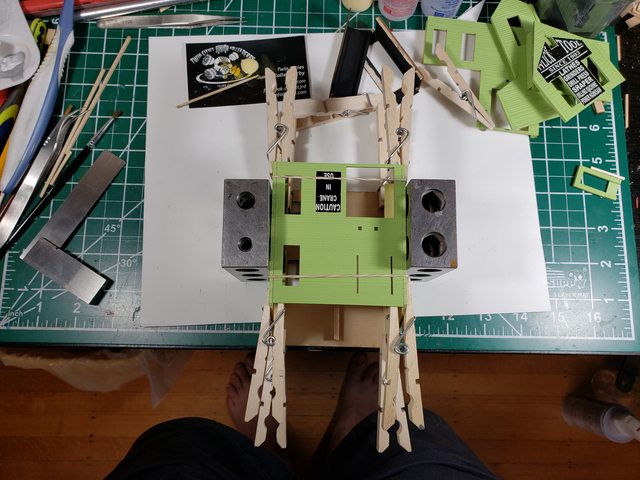 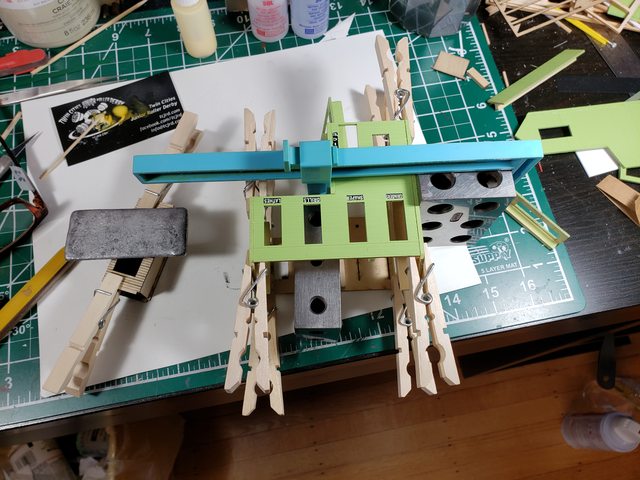 Yesterday I applied a pretty heavy wash that was a mix of black and grey. I can't decide if it's too much or not yet, but it's acrylic over enamel, and I didn't seal it, so I can lighten it by removing some if I feel the need. After that I glued the concrete foundations on the buildings. Here is my sketchy weighting system. 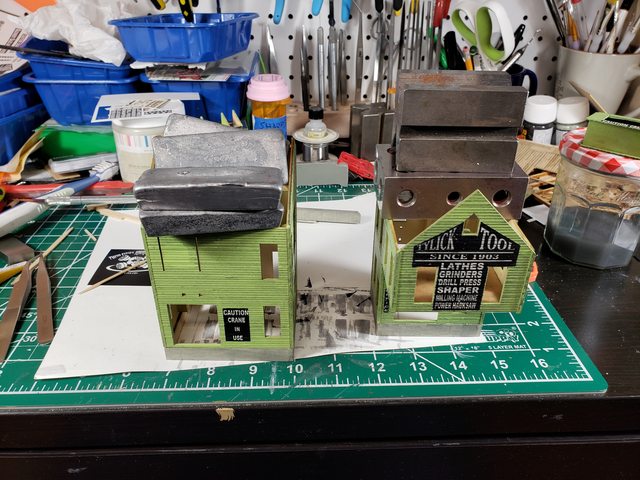 Then I test-fit the walkway, just to see what it looked like. 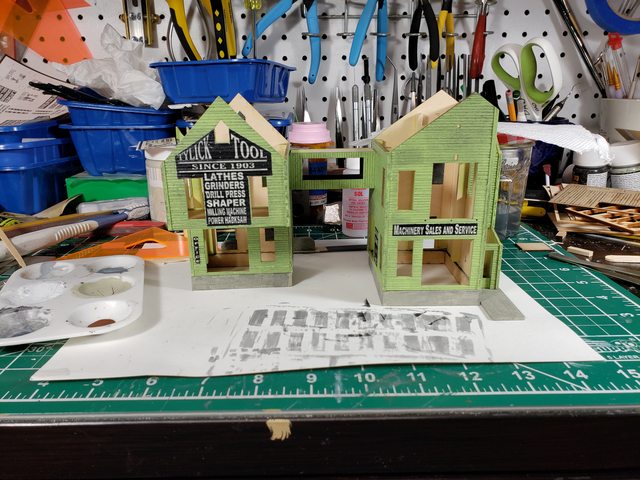 I applied the "Caution Crane" decals to the walk way, then started working on the windows some more. There are a ton of windows in this kit, and they are all a multi-step process.

No more photos yet, but I'll be working on windows for a while yet I think.
I

Great job on the large sign! I've struggled getting those to follow the contours of the siding. Looks great! Mind talking through how you did that?

ianacole said:
Great job on the large sign! I've struggled getting those to follow the contours of the siding. Looks great! Mind talking through how you did that?
Click to expand...

I scanned it in and printed it on decal paper. It worked so-so. See https://modelrailroadforums.com/for...tool-time-for-the-insanity.32556/#post-482854
I

twforeman said:
I scanned it in and printed it on decal paper. It worked so-so. See https://modelrailroadforums.com/for...tool-time-for-the-insanity.32556/#post-482854
Click to expand...

Ah, I missed that from above. While frustrating, the results are really good!

Staff member
Great looking work, so far!
If I may pick your brain, a small section, what are those weights made from in post #10 on the left? They look like lead castings? From tire weights?

Sirfoldalot said:
Great looking work, so far!
If I may pick your brain, a small section, what are those weights made from in post #10 on the left? They look like lead castings? From tire weights?
Click to expand...

They are lead ingots for casting bullets. Another of my too-many hobbies. They make great weights though.

twforeman said:
They are lead ingots for casting bullets. Another of my too-many hobbies. They make great weights though.
Click to expand...

I used to cast my bullets from tyre weights, but now they use something else for balancing tyres? I don't even know what metal it is?
(being from the South I should have said tar waits.)

Sirfoldalot said:
I used to cast my bullets from tyre weights, but now they use something else for balancing tyres? I don't even know what metal it is?
(being from the South I should have said tar waits.)
Click to expand...

Most tar waits are made of zinc now I think. Doesn't make good boolits.

Today I got the sills glued into all the main windows. This is the back side so it doesn't look like much. But this means I can start installing windows tomorrow. 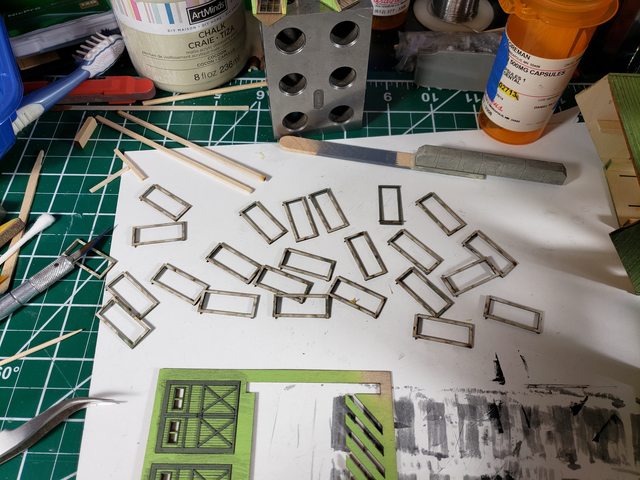 I also glued the staircase to the main building. 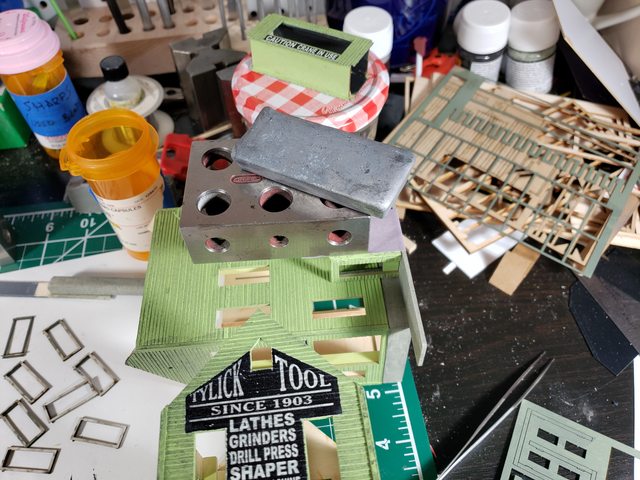 Here is a closeup of the first freight door I installed and an attic window. Those little attic windows have some tiny details. 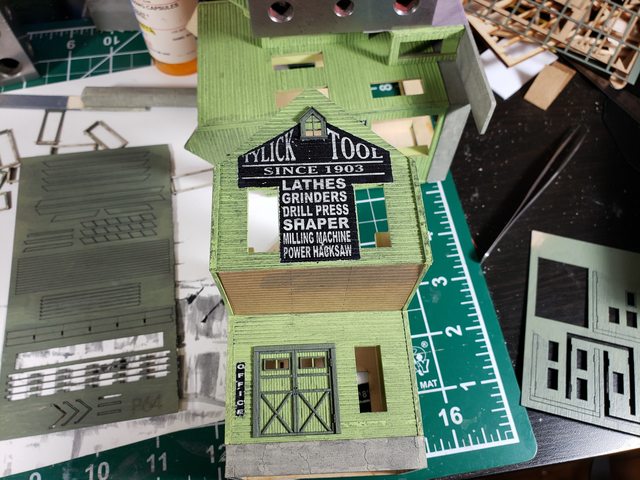 And an over-all of the current state of the two buildings. 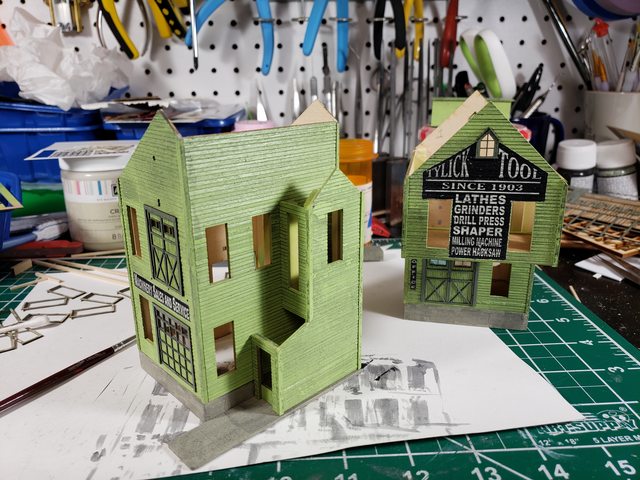 Worked some more this evening. Managed to get all the windows installed, except three. The two in the crosswalk and the one you need to leave out to install the crane rails. 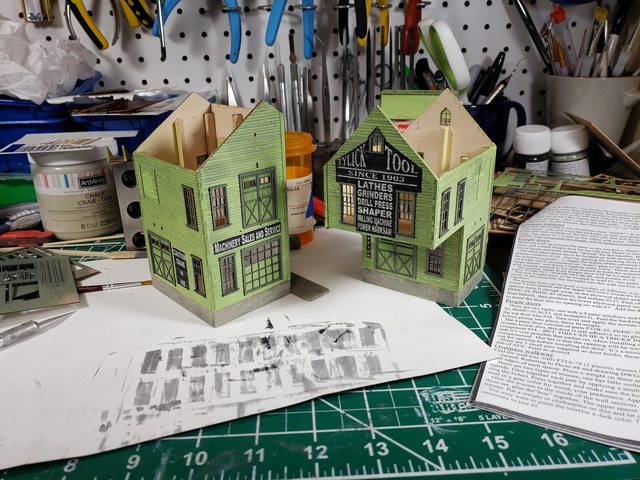 I'm going to have to glue this thing to a base pretty soon I think so I can add the crosswalk and the support for the underpass. I have some 1/4" foam core, I'm just worried that it will be too thick when I want to install it on the layout. I'm also going to have to figure out how the track is going to work where it goes under the building...

Got a little more done yesterday. I started building the support bracing for the overhang (you can see it in the background) and started making the docks. 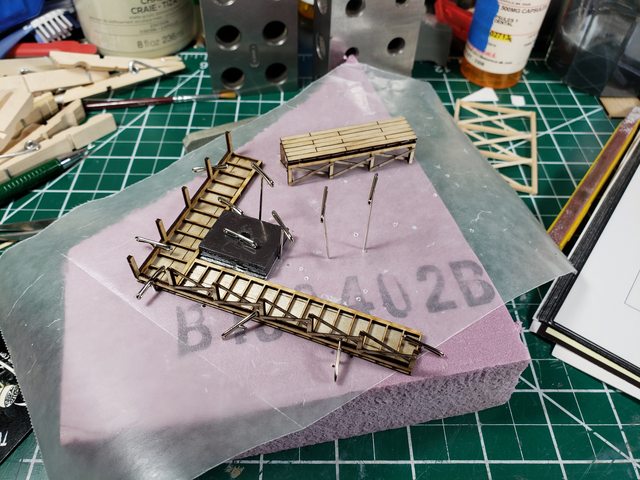