Atlas GP38 decoder: What I SHOULDA done the first time

[Last week I posted a question on another forum about installing a speaker into an Atlas GP38, and it somehow morphed into a how-to thread. I learned shortly afterward that there's a better way of doing it, to get improved sound quality. Hopefully nobody imitated my original bad example , here's the 'better part': ]

The LC series of Soundtraxx decoders are notorious for their weak amplifiers - they output only a fraction of what other popular brands (Digitrax, QSI, etc.) produce. For this reason I needed an enclosure at least 1/2" deep, mounted beneath the twin fans at the rear of the long hood. Since the space was filled by a metal weight, cutting and grinding was necessary.

Here is what the rear weight looked like after the downsizing operation (forward end toward the left): 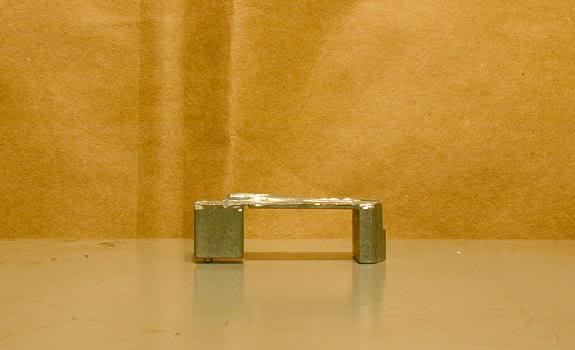 With the decoder and speaker already connected electrically, I carefully guided the speaker into a face-down position over the rear truck. I measured my available space, then cut out the sheet styrene pieces needed for a 1" x 0.56" x 0.5" box to house the speaker. I used a hacksaw blade to cut two small slits into one of the end panels for the wires to slide into, attaching it to the forward-facing end...

...then I re-attached the weights. This view from the loco chassis' right side shows the interior clearance between the speaker cone and the top panel: 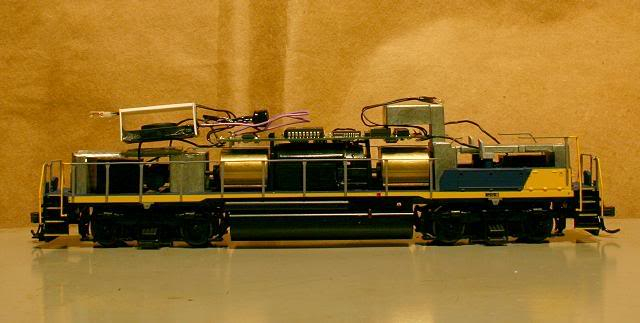 Since I was re-doing an earlier install, the speaker was already wired to the decoder - this prevented me from being able to construct an enclosure separately ahead of time. A consequence of that was, not all of my seams were airtight. Luckily I had plenty of Liquid Electrical Tape... 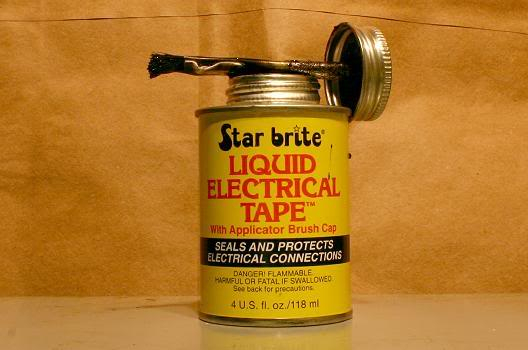 ...this not only helped me protect the uncovered leads of the capacitor, but filled-in unwanted gaps as well: 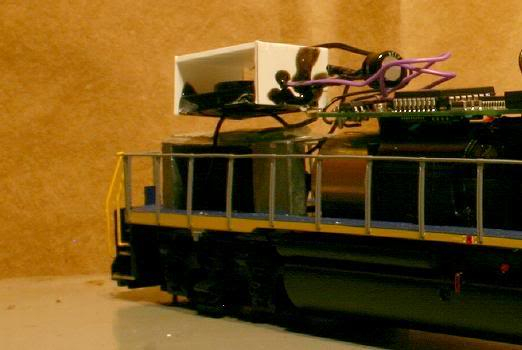 Here is a view of the almost-completed speaker enclosure. I still needed to attach the 'feet' to the bottom to keep the speaker cone off of the metal weight surface:

Now the unit was ready for the preliminary track test, minus the body shell. I was pleased to hear that the exhaust sound was perceptibly louder than it had been when I tried earlier to use a smaller, flatter enclosure. All that remained now, was to re-attach the shell:

The sound was even louder once the shell was restored - the additional effort paid off handsomely!

YEA, Ken!
I am very happy that you saw an improvement. Ain't it sweet.
S

Glad I found this thread...I just installed an AT100 in an Atlas GP38 with a 3/4" speaker facing up through the fans, and I can barely hear it! My only other Soundtraxx installation was an older DSD sound only decoder. It's the exhaust volume that's so quiet, the horn and bell are fine. But since your method seemed to help I'm going to give it a try.

I'm also not that happy with the motor control and throttle "lag" with Soundtraxx decoders, anyone ever play around with tweaking voltages and speed tables to get better performance? For example, if you throttle up a bit, then throttle back to a stop, the sound lags several seconds behind...

So how much width is there inside the shell of a GP38/40 anyway?
R

SteveWoodward said:
...I'm also not that happy with the motor control and throttle "lag" with Soundtraxx decoders, anyone ever play around with tweaking voltages and speed tables to get better performance? For example, if you throttle up a bit, then throttle back to a stop, the sound lags several seconds behind...
Click to expand...

Steve, there is a CV for adjusting the throttle notch which will give you a quicker exhaust response. However, it still won't compensate for quick jumps in throttle settings, up or down. Sorry, I don't know the CV# right now.
S

Jeff, I don't have a shell handy, but a 3/4 speaker barely fits, requires a little trimming. There's a "step" in the atlas shell that widens toward the top, you can make a 3/4" speaker work but now I'm going to experiment with a 1/2" oval speaker with a larger enclosure.
R

Steve, I meant to add that if you play around with this CV and the acceleration and deceleration CV's, you should get close to what you want.
E

I just completed my first install of a sound decoder in my NECR GP-38. I used a Soundtraxx AT-1000 and a Soundtraxx 810112 speaker. I trimmed the rear weight down by removing the "housing" for the rear light, making the top flat. This gave me enough clearance to install the speaker against the long hood front fan. Before I attached the speaker, I used styrene to block off the rear fan opening. I think it sounds pretty good, especially after getting into the CV and cranking up the volume.