A new beginning inspired from my old Central Midland Layout

Staging huh? How come I can already see it ballasted with a few industries to switch back there on Henry curve. Maybe an ammo plant!!

The yard looks great! Nice size - it's about 4x the size of mine. Have fun staging, Eric.

Ericsauto said:
Now I can Park and stage some trains!
Click to expand...

I see an Empire State and a California Zephyr. Which other trains are you representing here? I see some Santa Fe diesel coach train, something in SP steam daylight, and an NYC heavyweight.

Iron Horseman said:
I see an Empire State and a California Zephyr. Which other trains are you representing here? I see some Santa Fe diesel coach train, something in SP steam daylight, and an NYC heavyweight.
Click to expand...

I have too many to list or remember. I have some Florida road names, Pennsy, Baltimore, and Ohio, etc.I never really did represent any certain era or road name. I like too many things that I just run what I want to. I jokingly call my layout the "ANY Era Layout". I just like people to enjoy the variety. I have a double-decker bus that my daughter bought me when she was in Germany. That will always stay on the layout since she bought that for me.
B

Hi Eric,
I agree with you, 'any era layout'

I'm particularly fond of steam engines, and particularly the large ones. I'm a fan of C&O, B&O, NW, etc, etc.

And as a kid of course I had the ubiquitous Santa Fe diesel engine,...those famous worldwide recognizable colors.

I had recently returned from Asia and was living in the Wash-Balt area when a company in Balt called Life Like made the bold move to really upgrade plastic trains to nice scale models. They introduced their Proto 2000 line. They introduced a whole line of detailed diesel locos, then they introduced that superb 2-8-8-2 steam engine.....WOW. They set a standard in plastic scale model trains that the others quickly followed. Bachmann, Athearn, etc all jumped on the band wagon to introduce their premium lines as well. Plastic detailing became an art that eventually was a rival to brass locos.

I was collecting a little of everything. I would buy some stuff that eventually got superseded by even better stuff, so I would attend the Great Scale Train Show in Balt and sell off older stuff and try to upgrade to the better stuff coming out. I would visit John Glabb's Peach Creek brass shop in Laural, Md, and droll over the brass locos which I considered beyond my reach, but then look what was coming out in plastic a few months later.

By this time I had collected quite a few steam engines of various lines, and principle a number of diesels from Santa Fe.

So when it came to planning my new layout, how could I choose just one time frame, or location, .....if I wanted to collect and run all of those type trains? I wanted to run steam and diesel, and I wanted to run east coast and west coast lines.....on one layout??

I've decided my trains are going to run from the east coast to the west coast,...Balt to Calif. I'll call it the Continental Connector. Balt will be on the lower deck and Calif will be on the upper deck.

Since I am not a stickler on time frames I'll be able to run both modern and older style freight and passenger cars on my layout, and of course steam and diesels. I'm going to have lots of staging that will present any number of variations,...including a few European trains I've collected. Yes it won't be prototypical, but it will be fun. And I hope to get a considerable amount of industry in this space as well.

Time to start back on this one. This year has been so crappy that I was just not in the mood to do much. Went down to the basement and dusted some stuff off and decided to write down some to list and goals. I did change up some scenery earlier this year and did not update it yet on this forum. Maybe some pictures later next week. Hope everyone is well.

I have finally been doing some work on the layout. Like writer's block, I am having issues figuring out the scenery. I tore out the scenery that I was working on at this part of the layout because it just looks like two loops and in a valley. I figured at one end of the layout we needed some raised scenery. I am playing around with the Drive-In theater idea again. I am planning to hide the projector on the hillside. The screen is just for reference. I will scratch build a wooden one. I really need to get this scenery going, because I want to work on details. A couple of shots of my rocks and cliffs. My favorite part of modeling. I like detailing the rocks, it is relaxing to do. I am in process of purchasing a bunch of trees to fill some hillsides. Winter is coming and time to get it moving again. God only knows how look we will be in lockdown with this Covid crap. You take care and I will post some more soon. 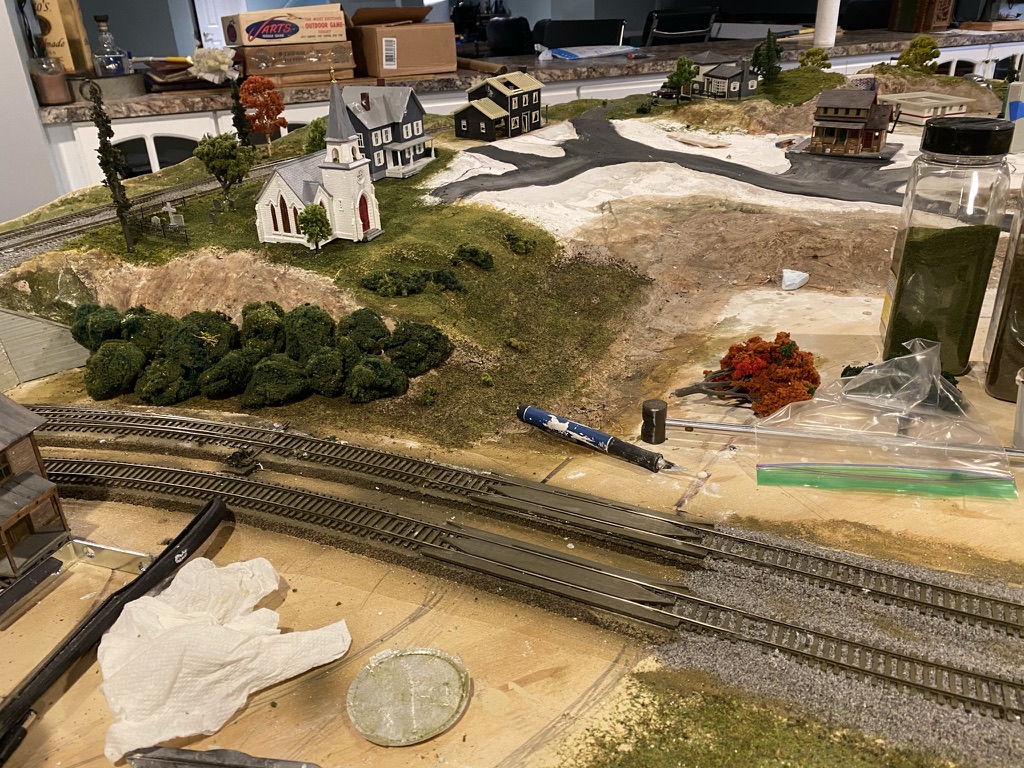 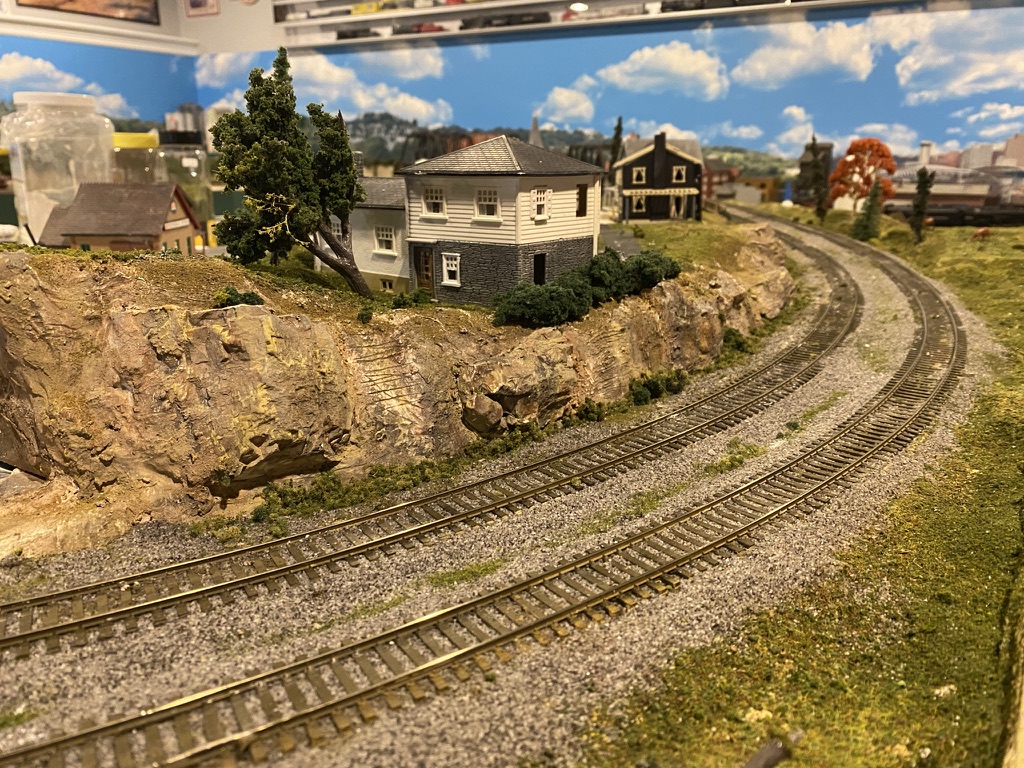 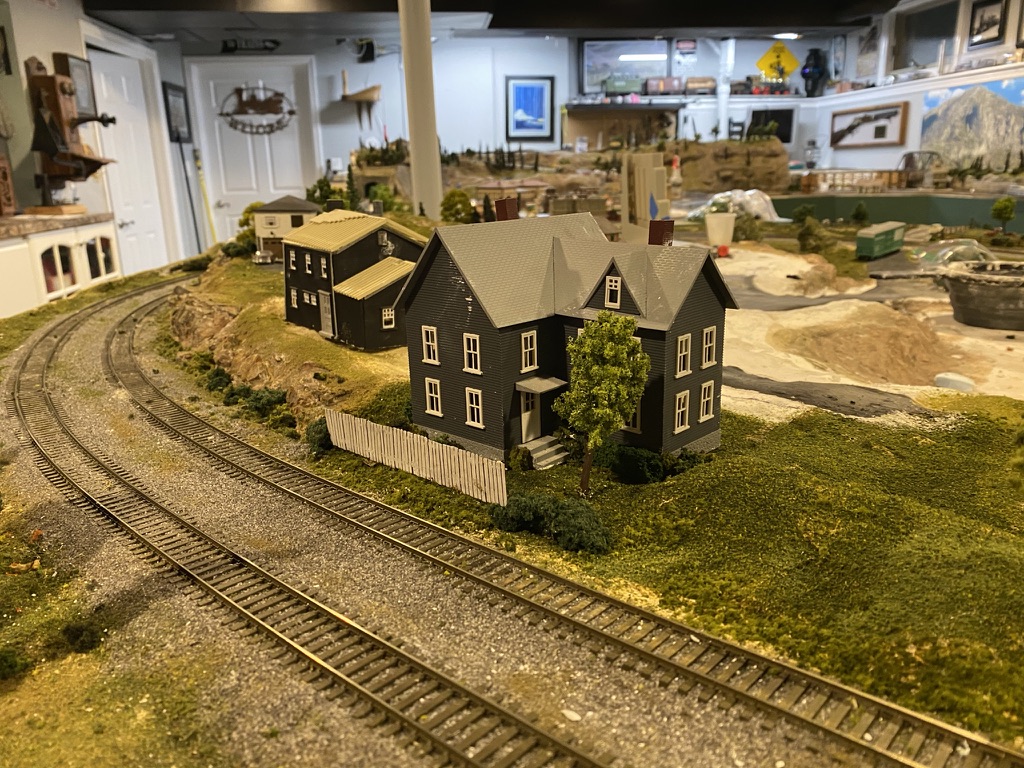 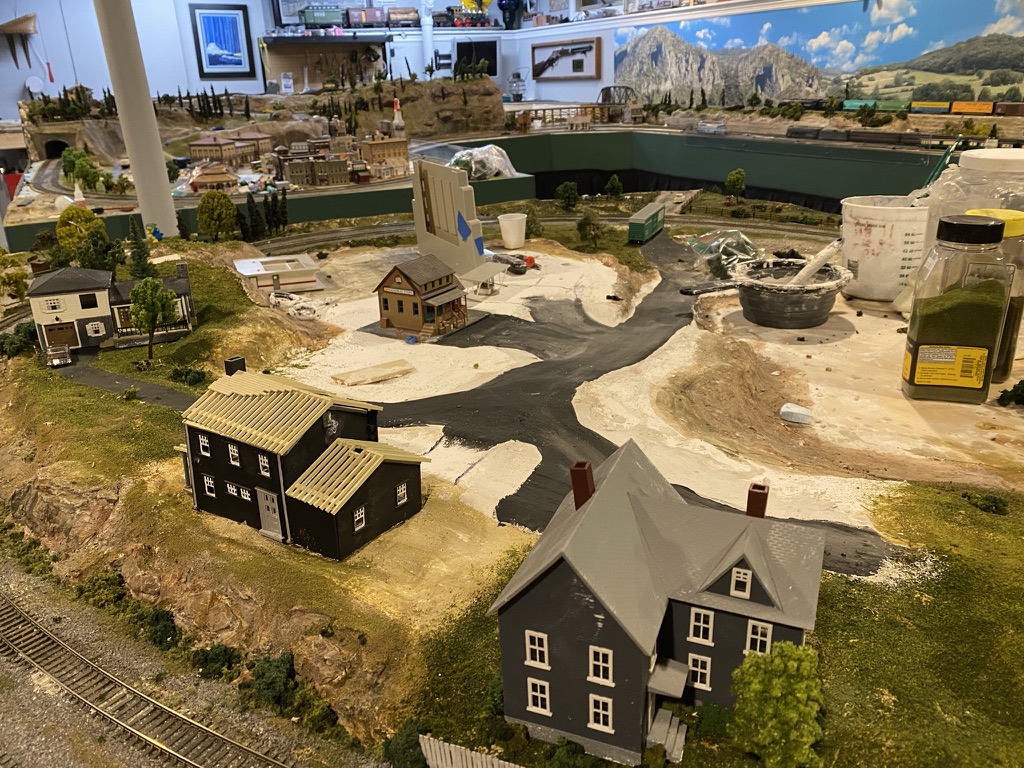 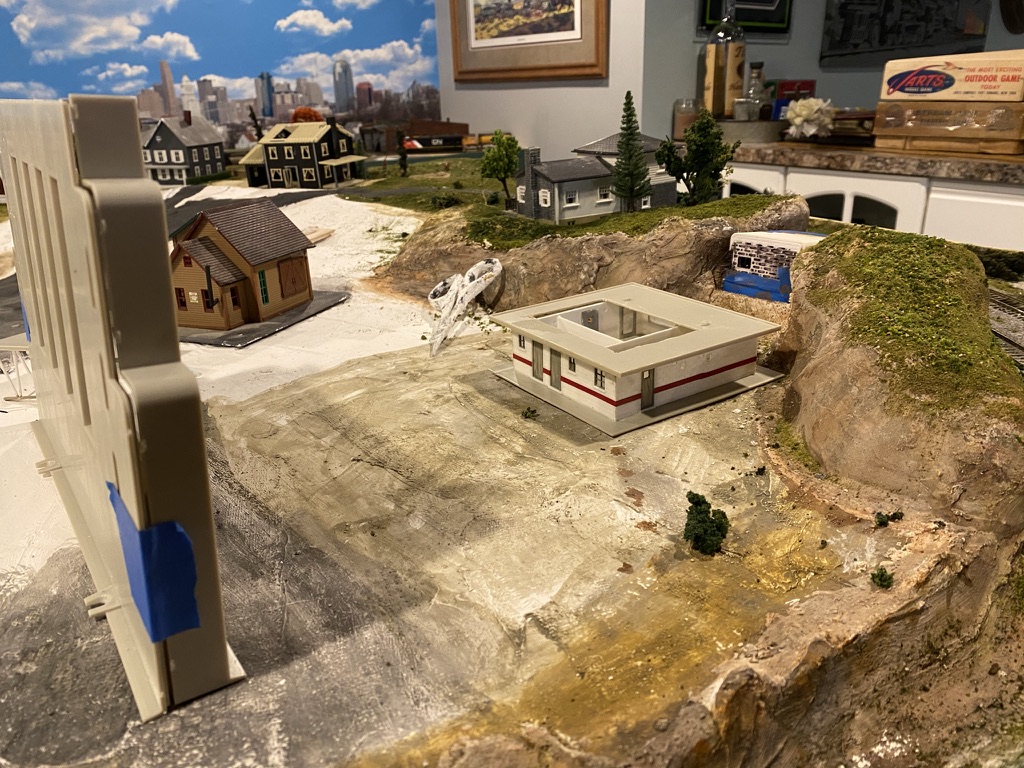 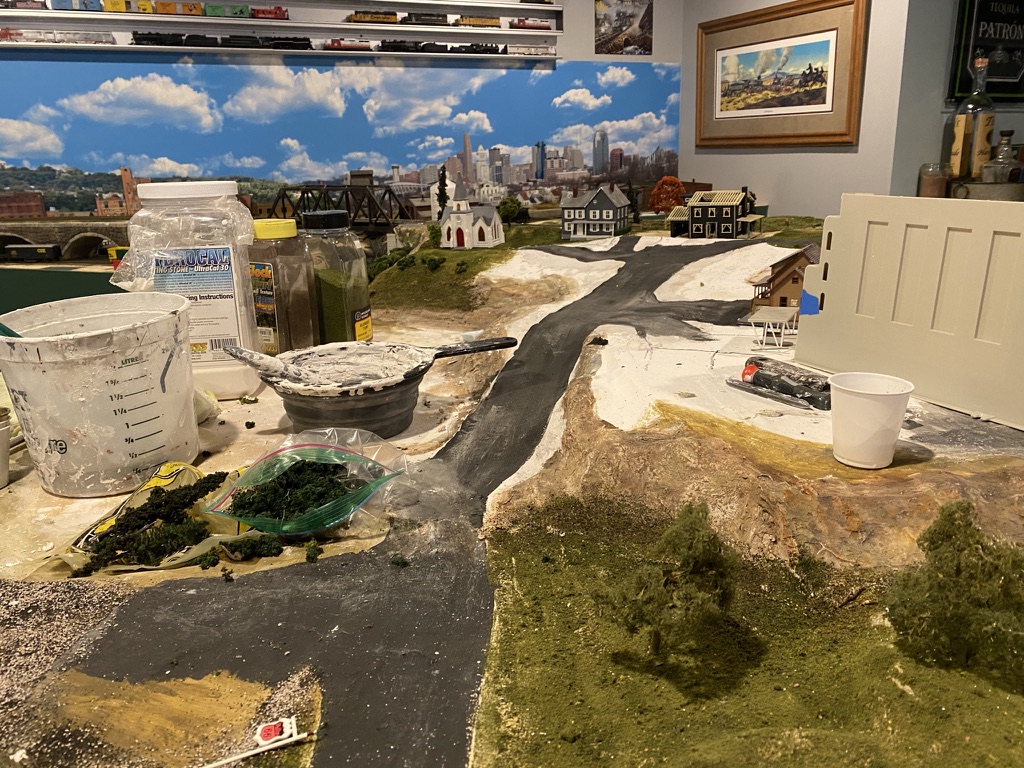 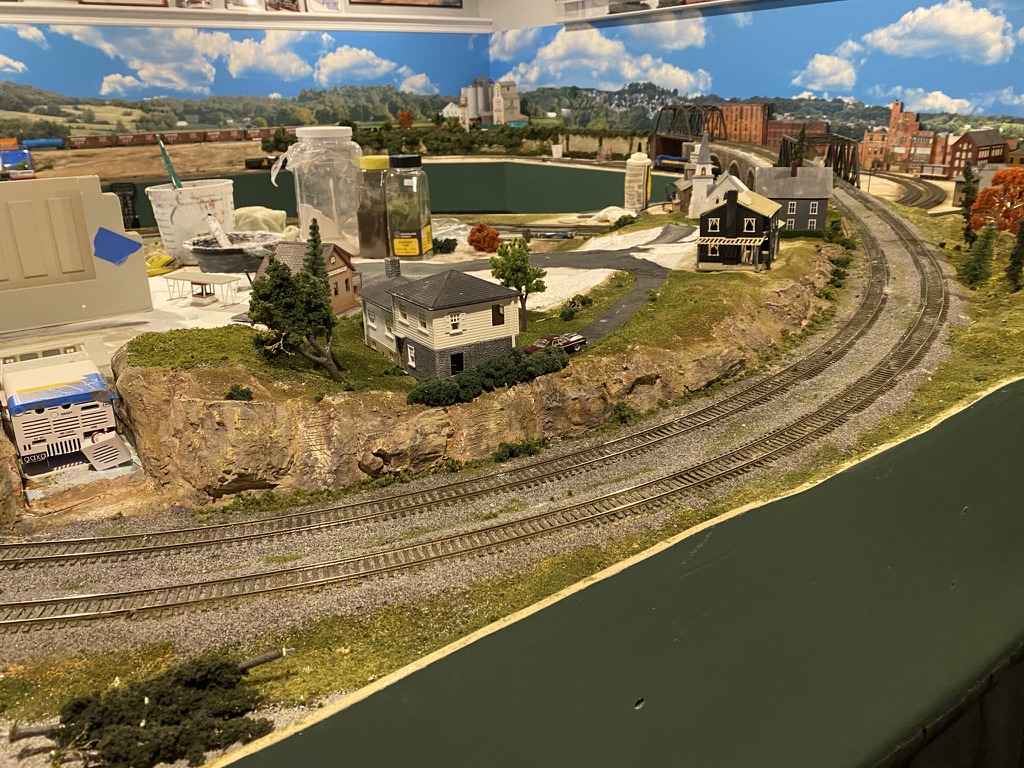 I can relate to what you are talking about getting stalled in the building process. I try to not let it last too long.

Eric, I just started your thread this afternoon and it is a great read. Congrats on getting as far as you did prior to the Covid crisis. I am an operator, basically I like switching. Your idea and your build of Any Era while not for me definitely works for you and it looks great. That to me is what is most important and its that you like it. I love the big steam and that BigBoy on the turntable looks great. My wife and I chased 4014 when it was in Wisconsin the summer of 2019.

Glad the grandkids are keeping you busy. Just remember it is tougher work being retired then when you actually were working.