Who wants to see Walthers produce an NW5?

Gents (and ladies too),
I know that the fun folks at Walthers have been getting some suggestions for producing an NW5. If you are a GN or BN fan, these are a must-have item. Yes I know there were 3 others built besides the 10 for the GN. Anyway, Walthers has gotten a few emails about producing one, after there was one pictured on their new catalog.

Now would be a good time to drop them a line about making one. They have seemed receptive to the idea. It would sure beat scratchbuilding one (I tried, I failed) or the high cost of brass.

Let them hear your voice now.

Not sure what in the heck an NW5 is? Look here:

If Walthers came out with one in plastic, I'd buy it. I model Seattle in the 60s and there was one working around there then. BTW, the one on the Walthers cover is the recently restored unit at Duluth, MN. Saw her there in '99 before the makeover.
Ron Ferrel

I might buy one just because its different after all I had a brass RS1325..EMD made two of these units..Both went to C&IM..

Personally, I'd rather see someone else do it besides Walthers. The only locomotive I'm interested in seeing from Walthers again is the SW1. And if they won't do it, I sure hope somebody else does. It's getting old looking for undecorated SW1s for nearly a decade and coming up empty....

Maybe we should ask Walthers to do the NW5 as part of the old Life-Like line.

Isn't there already an SW-8 in the LifeLike line? How difficult would it be for them to modify it?
C

There's a big difference between the SW8 and the NW5, although some of the hood and a portion of the cab could be used as a starting point. The frame and drive would certainly have to be all new, as would the short hood.
C

There was an article in one of the magazines many, many years ago about kitbashing one of these. I remember it started with a GP-9 frame and two SW bodies from Athearn. Now that I think about it I believe it was RMC in early 1969 or so. At the time Athearn was the only source for anything even similar to the pieces parts needed to build it. The SRR had a couple of these as well as the Mississippi Export I think.

Are you guys petitioning Walthers? One thing I would definetelly like to see from them is a CN striped version of the FA-1. Those are great units at good prices, and Idon't feel like working with an undec one. Model Power already makes good FA-2's in CP pant, both powered an dummy, so all we need now is a good CN unit. No VIA FA1's ever existed, although its another great sheme.

Russian said:
Are you guys petitioning Walthers? One thing I would definetelly like to see from them is a CN striped version of the FA-1. Those are great units at good prices, and Idon't feel like working with an undec one. Model Power already makes good FA-2's in CP pant, both powered an dummy, so all we need now is a good CN unit. No VIA FA1's ever existed, although its another great sheme.
Click to expand...

How's this? The caption shows it as a FPA-2U, which could probably be kitbashed from a FA-1 model. Not that I'm an expert on Alcos, or cowl units, for that matter. Still, I have to agree, it's a sharp scheme: 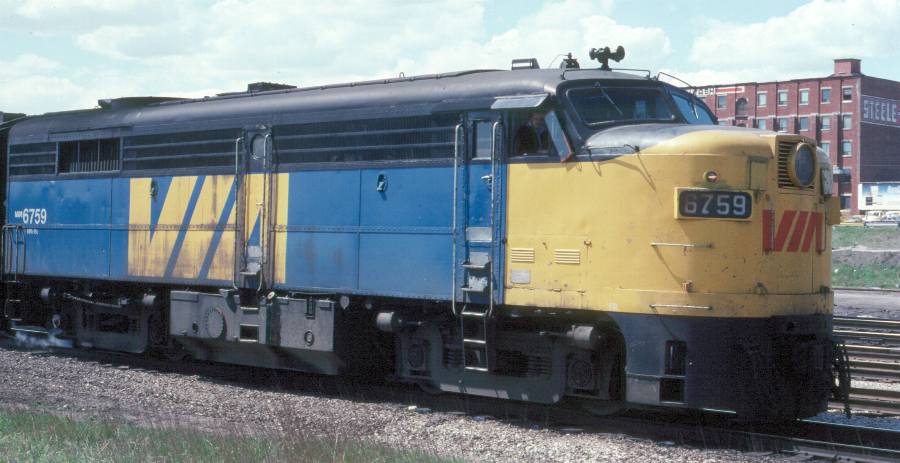 RCH said:
How's this? The caption shows it as a FPA-2U, which could probably be kitbashed from a FA-1 model. Not that I'm an expert on Alcos, or cowl units, for that matter. Still, I have to agree, it's a sharp scheme:
Click to expand...

I've discussed this a lot on a modelling group and basically came up with this...

I was planning on buying two CP Rail FA-2 dummies, but now with so many F units around, it will lickely be just one, the other one would be for a VIA conversion anyway.

However I've managed to find an Athearn F7A powered VIA engine at a good price yestarday (they're discountinued) and thus the other two units are free now to be dummies. Expanding further, the curent VIA lash-up is:
VIA Athearn F7A powered
CP ? F7B dummy
CP ? F7A dummy

So an FA-2 in CP paint would be an accurate replacement for the F7A dummy. Moreover, if I could find a F7B in CP or VIA paint cheap I could make an ABBA set! (A CN F7B is welcomed for CN feights too). Thus I'll just need one FA-2 and won't need to repaint it in VIA color.

With that said, another point is that all the CP units operating on VIA could at any time hit the road working on CP freights. As I've got an F unit ABA dummy lash-up that needs another units to power it. The dummy trio was tested as DMU power on CN last night though, and performs quite well.

Interstingly I've aslo found a powered VIA FPA-2 (Model Power?) for sale at the model show yestarday. It was being sold by the same person who repainted the powered F7A mentioned earlier, at the same price too. It even had an engineer in the cab waving. I did not buy it though because the paint was "too crudely" done in my opinion.
Someone else was also selling a VIA SD40-2 dummy eek but it was sold to a young guybefore I even got a look at it.

Final note regarding VIA.
I also now own an F40PH-2, which is great for trailing another F40PH-2 on a steel Budd train, BUT I'm going to model the "blue cars" first which traditionally have had the GMD F units and ALCO's for power, meaning the VIA F40PH-2 is out of a job right?
I first heard about it and didn't beleive it until I've seen pictures, but in the early-mid 90s powershort CP leased these units to run on their freight trains, which often had Century ALCO's for other power! Thus this passenger unit is being demoted to freight service for a while.

The good thing about modelling CN/CP/VIA is that a fair number of oddballs is allowed.

Sorry I'm going on for this long, but I've given this a lot of thought overall the last few days.

Apology not accepted for your post running long - I found it way too informative to allow you to shorten it! Now that you mention the difference in length between a FA-1 and the FA-2, it seems to correlate to the difference between a F7A and a FP7A, with the additional length used for the steam generator and water tank. Hmm, anyway thanks for the info!

RCH said:
Apology not accepted for your post running long - I found it way too informative to allow you to shorten it! Now that you mention the difference in length between a FA-1 and the FA-2, it seems to correlate to the difference between a F7A and a FP7A, with the additional length used for the steam generator and water tank. Hmm, anyway thanks for the info!
Click to expand...

You got me thinking now - one of those F units I have might be an FPsomething, as one is longer then the other... Still need to research to see exactly what I purchased. For instance I purchased an SW7, but the seller added a Canadian bell to it and said it was a SW900...

You might notice that I haven't incluided the ALCO FB units. That's because they cost the same as the FA units and are not available as CN/CP/VIA versions at good prices. Not that I like the B units much anyway, even the dummies. I see them primarily as trailers to highlight the F7A's beauty.
J

The NW5 has a NW2 body on an extended frame with Blomberg road trucks under it. The SW8 has the right length main body, but the single stack, louvers, and radiator grille are wrong. All new tooling is needed to do the NW5.

Fellas;
Just looked up that NW5 article. Its RMC but its June 1975 and the article was written by Donald Cook. I have that mag somewhere, now if I take those two bodies I have and that hobbytown chassis aahhuummm...
J

I think the FA2 is 2' longer than the FA1. The radiators were moved forward 2 ' and that gave the extra 4' for the S/G. The basic FA2 is no different than the FPA2 from what I have seen(other than the passenger train heat equipment). The FPA4 is a '251' engine powered unit(rather than the old '244' engine). Also note that the 'battery boxes' were moved from just forward of the fuel tanks to just under the cab floor. This gave additional
room for boiler water tanks.

I would likely pick up a couple of these units. I have a brass one painted in GN colors that I've been deciding whether to go through the effort of repowering and repainting, or keep it as is.

If I had some undec units to start with, life would be easier!