Staff member
May I enquire as to the scale N, HO, O? That would help as to track spacing.
Welcome to the forum!
A

Staff member
Late out here and time for my closing eyelids. Be sure and check in the morning - should be lots of guys with advise.
I'm usually back here between 7-10 Eastern Time.
Put your first post in the "ANPL Coffee Shop". Lots of guys check in there every morning - you are welcome too!

GUY - The Tractor Doesn't look too bad on the outside? Actually, The tyres look very good - certainly not 20 years old! Good project - after all it is summer up there and good temperatures to be working on metal objects outside - not when it is 20F below and your fingers stick to the wrenches...

I'm not thay much into HO as I used to model mostly tinplate and O-scale (2-rail).
But you will find much he,p from all the others?

Staff member
Apart from the tracks along the straight walls and any buildings/scenery you wan't in front or behind them, that will determine how wide those shelves will be. A maximum of 30" is plenty, to reach over easily, less if possible. For the corners where the shelf needs more to allow for the curved rails to "cut inside" that, the best method is to use triangular infills to support them. I'm going to take a guess that you intend to use set track i.e. pre-curved, fixed length, sectional commercial track, the gapping between is usually 2" or 2-1/4" between centers.
A

Will be using code 100 flex

Welcome to the forums. I have a shelf layout with 24” maximum depth except of course in the corners. I have 2 curves that are 34” and could have gone with more. I would not cut to 36” and would go no deeper then 30” and only put scenery or structures within the last 6”. My suggestion is to read some of Lance Mindheim books on shelf layouts his blogs and website (shelflayouts.com) and check the recommended standards on the NMRA website for track spacing.
TomO

Anything over 24ish is to far to reach to get to the back . Its the reason that counter tops are 24 , anything deeper than about 28 - 30 and you fall over and anything you hit gets trashed or you have to use a claw to reach the back . I highly recommend using layout planning software , it will save you a lot of headaches.

If, IF you are going for as much realism as possible I'd steer away from code 100, especially if it's the Atlas with the black plastic ties...
C100 rail measures out to about 14" tall if it were the 1:1 scale (this excludes the tie height)...In the US, the tallest rail is about 9"..So, C100 is visually 5 scale inches too tall..The (black) ties are too wide, making them too close together, the space between them too narrow...Then there are the switches (TOs): Again, if it's the same track, the frogs are plastic which can cause stall outs over them..
Sorry if I've been barking up the wrong tree. But if I'm correct thus far I strongly recommend you go code 83 or lower, rail... Atlas CustomLine switches and Peco code 83 have metal frogs which can be powered to prevent stall outs...
Cut a piece of string 28" long. Anchor one end somewhere directly out from the room corner and use the string to show you just how much depth your shelf will need in order to install a curve of any radius there (including scenery/structures you may want behind it)....
Last edited: Jul 18, 2020

I have told you before that code 100 scales out to 8.7". Please do not mislead newbies. Yes it is a bit oversize, but not as much as you represent.
A

Wow thank you guys so much for all the feedback I am now thinking of eliminating the 24 inch radius and going 26 28 30 as far as track spacing am I going 2 inches off center of track for spacing ? I will get shelves ripped to 30 inches I have used code 83 my whole life but when I think of realistic railroad ties are black after being dipped in tar code 100 appeals more to me

One thing about code 100 rail. Weather it and the ties. I have never had anyone tell me the code size of my rail, I use 70 now but have used 100 in the past. Krylon camo brown worked great for me on the 100. Have fun.

Once code 100 is weathered, the difference between 100 and 83 isn't much of factor. Ties weather and even black new ties will weather once they are subject to the elements. My advise is use Code 83 rail and not worry about the ties not being black.

I use Earth color spray cans to weather the track and will soon use rust color paint for the sides of the rails. Once the track is ballasted I run some India Ink solution down the center of the track. This is a minor touch of weathering, but it makes a difference in the track's appearance.

Like I think Howard Zane of George Sellios once said, "Track is a model too." 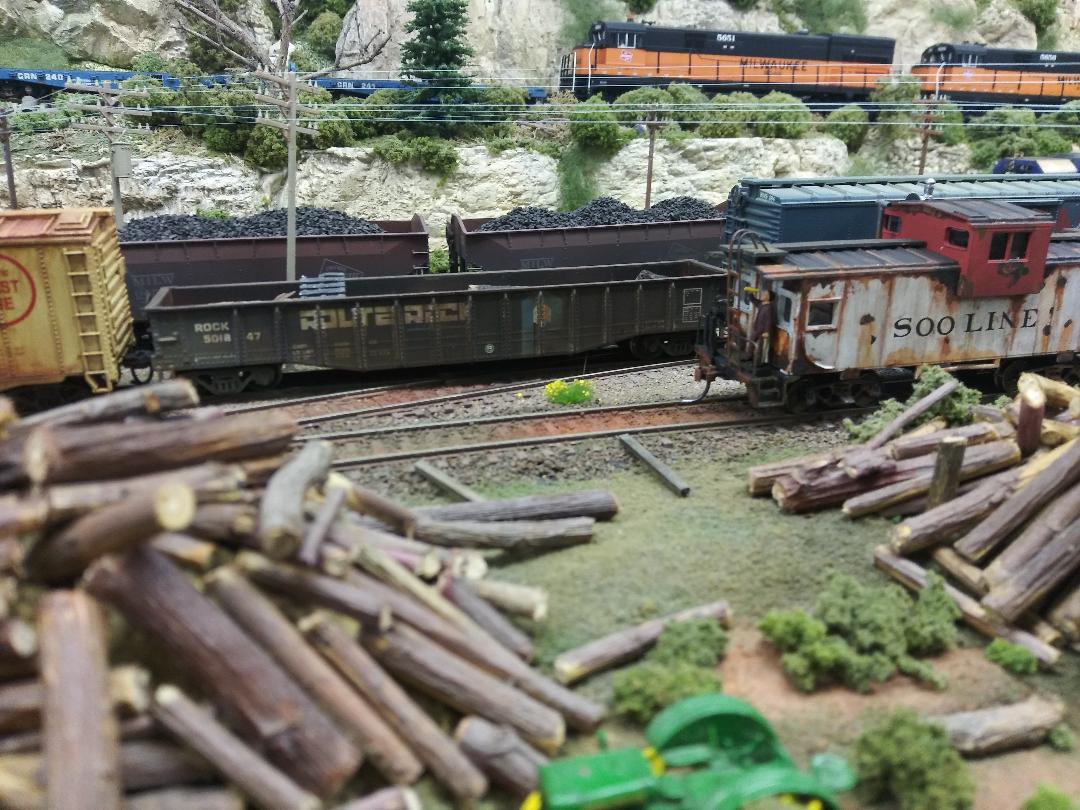 Spilled ore on the track behind the caboose. The ballast is a blend of Woodland's Fine Gray, Black and Red ballast.-Greg

For what it's worth, My benchwork is 24" deep. My curves are 32" and 30". It's all about the placement. I really don't have a problem with 24" radius curves for that matter, although you are limited with regard to some longer equipment. However, if you are dealing with an 8'x10' space, you are already dealing with limitations. The object is to build something you will enjoy operating, and not something that will frustrate you.

Code 100 supposedly scales out to prototype 136lb / 155 lb rail, which is quite a lot to step over in real life. But on a model railroad, Code 100 rail doesn't really look out of place, especially when weathered. The ties may be a tad big, but again with ballast and weathering this flaw disappears.
I use code 70, because I like the appearance, but we work with what we have available.
G

Code 83 is more prototypical for modern equipment and most railroads other than the Pennsy , Code 100 is more prototypical of the Pennsylvania Special type 155 lb rail . Pennsylvania and B&LE both had 155 lb rail . Use what ever size you think is best and weather to taste. You don't have to stick to particular size, Most railroads use heavier rail on mainlines where the speed and abuse is the highest, and lighter rail on branch lines and yards. Personally I use both code 100 for main lines(Micro Engineering / RailCraft) , hidden tracks (Atlas ) , and code 70 for everything else ,
T

My current layout is in a 14' x 14' room, folded dogbone with a pennisula down the center. I have always use Code 100, mainly because I started with it 67 years ago, and still use some of the old fiber-tie, brass track on yard and spurs. To keep the areas where the return curves run a bit smaller, I have used Sinohara 20" radius sectional track (no longer available) with 18" radius curve Atlas inside that and 15" radius Atlas inside that at one end of the dogbone. The curves converge into curved turnouts. Separations run between 2-3/4" and 3-1/4". My main criteria was clearance on the curves for 85'passenger cars. One thing to keep in mind is how far across the layout you can reach to correct derailments, make scenery, etc. Planning needs to address those circumstances. In some instances I have always relied on doing a preliminary placement of track to see how things work out. Welcome to the "road". Best of luck and stay well!

We're way into the weeds here discussing Code 100 rail vs any other code. It wasn't the OP's question.

For longer cars, you'll want the largest curves you can shoehorn into the space you have AND that you can reach into without your elbows destroying stuff or knocking it askew. It might even help to have easements, although you won't notice those unless you're standing sort of over them. And around-the-room layout, especially higher towards the chest, and you won't even know if there are eased curves. But, using them or not, it can make a difference to the depth of your benchwork if you are going to nest two or more curves of concentric tracks.

Note also that you can't nest curves of the same radius...not if you want their approaches to be parallel. If you don't see that, draw it out and you'll find it to be true. 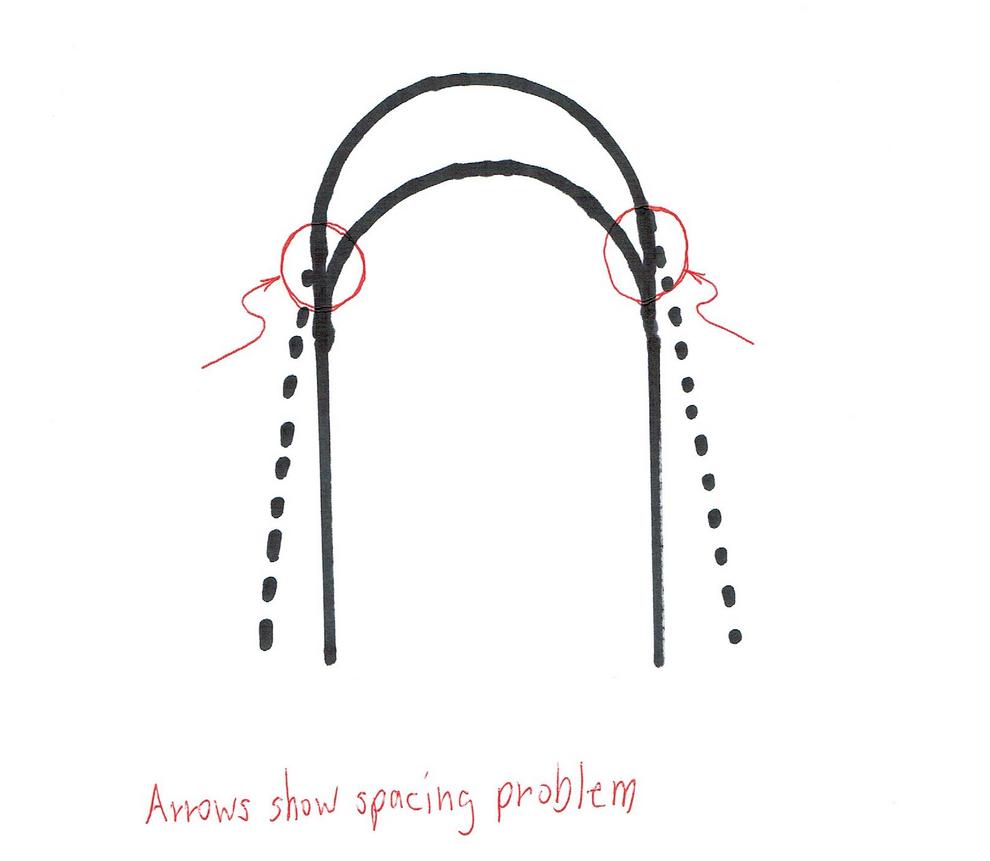 You have to approach the top curve with non-parallel tangents, as the dotted lines depict. So, you'll want nested curves, fine, but of increasing radius.

One other suggestion, and it could be important later when you realize what you have done: don't run tangents to curves. Run long shallow 's-curves', or a gentle sweeping curve between the main corner curves. It's more natural, but it also forces you to create matching scenery and even contoured terrain to make the long curves appear to be engineered and sensible. 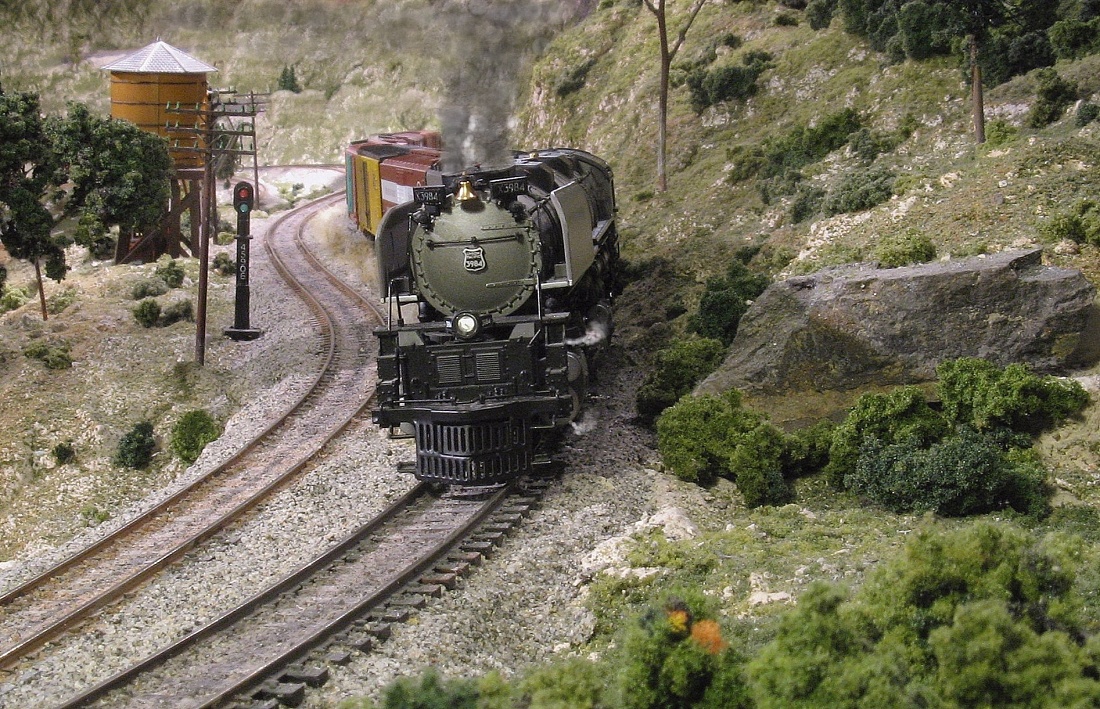 If you do this, it could alter the thickness of the bench top between the corners of the room.

It's good you're asking. Draw it out to scale. Better, and I have done this for every layout so far (X4), I use cheap masking tape about 3/4" wide, and I map out the bench edges on the floor, and then make the curves and tangents. Any turnouts, use a realistic length and angle at the frog so that you aren't dismayed when you go to put all the tracks down and they don't line up. Once all that tape is down, you can stand up and survey it and decide what needs revision or just a better line.

Boris said:
For what it's worth, My benchwork is 24" deep. My curves are 32" and 30". It's all about the placement. I really don't have a problem with 24" radius curves for that matter, although you are limited with regard to some longer equipment. However, if you are dealing with an 8'x10' space, you are already dealing with limitations. The object is to build something you will enjoy operating, and not something that will frustrate you.

Code 100 supposedly scales out to prototype 136lb / 155 lb rail, which is quite a lot to step over in real life. But on a model railroad, Code 100 rail doesn't really look out of place, especially when weathered. The ties may be a tad big, but again with ballast and weathering this flaw disappears.
I use code 70, because I like the appearance, but we work with what we have available.
Click to expand...