santafewillie said:
I have told you before that code 100 scales out to 8.7". Please do not mislead newbies. Yes it is a bit oversize, but not as much as you represent.
Click to expand...

If you put a ruler to C100, the rail is just about 5/32" tall. Even if it depicts only 11", not 14", it's still 3"-5" overly tall...No way is C100 in HO..8.7". Code 83 is about that..Informing new comers of certain ancient or archaic aspects of the hobby they might not, typically aren't normally aware of, and may in fact be very happy to have been alerted to, is not 'misleading' them; no diff than explaining why/why not DC/DCC... One's old. One's new...
If Atlas were to at least correct the code 100 ties to its scale size and color, as their code 83 is, perhaps I'd like it a bit more..But as it stands this stuff is a 70+ year old design from back when toy trains had overly deep flanges. (And there was a reason for that in the 1950s).
As calls by serious scale modelers for more in-scale flanges were finally being met by Athearn, Atlas, BMann and others, so did the call for more scale-height rail eventually get answered with the advent of code 83 (The sequence of events may be reversed but it still is to the same end).
Whatever positive or negative responses it may cause, this is my last post in this thread...

MikeInHubCity said:
do you run your mainlines in the background or foreground? Just curious, as my layout will be around the room 8 x 9- 1/2.
Click to expand...

Mike: They are mostly centered, with industries and sidings on both sides.

On my layout I have one area that is difficult to reach and as I added scenery and structures, now working on this area became increasingly difficult. I did purchase one of those Top Side Elevated Creeper platform from Micro-Mark in case I did need to do more major work in this area in the future. 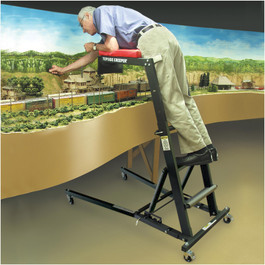 Knowing how far you can reach into a layout after the the area is finished is as important as checking your "reach" prior to construction. Why ruin your work by reaching in and over and hitting with your arm on structures you detailed and painstaking built?

Note: The creeper is well constructed, but difficult to move around, heavy and takes up a lot of territory to store. It will live under th layout expansion when that happens.

Staff member
Willie -- I appreciate the reference you posted above. There is some nice information there of which has given me some knowledge that I had forgotten about and some new as well.

I am a little concerned about the 2" spacing that the OP is talking about. I have let slide much of my brain power, but seems to me that I remember that to run longer passenger and freight cars that you need greater than 2 inch centerlines?

2" spacing is fine for tangent track, a little tight but it works. It must be spaced much further on curves, even broad ones, to 2.75" or more depending on the curve radius.
M

OK. My final input over this code 100 fracas...If it does represent 8.7" at paradoxically, 87:1 scale ratio, that still is roundoutable at 9". And I'm happy to move on with that being the finalized, recognized, and accepted hobby-industry heavy, 152 lb. HO rail...
I now realize gang that the larger side of my, or maybe the only side of my dislike of code 100 has always then, been the black, out of scale ties and spikes which, sorry, is hideous to me... If there were enough push for it in the hobby, I'd be right with you trying to get Atlas to re-tool, if need be, in order to have brown, correctly scaled/spaced Delryn HO ties under it !! I'd make a hi speed main with it myself if my situ called for it....
...So. In closing..(if I haven't made the equivalent of one already !), yes I like code 100 rail in HO (or larger scales)..But in HO it'd, for me, have to be for heavy traffic depiction and on scale ties..

Selector,
now, after I finally gave up on calling C100 too tall, having gobs of folks convince me C100 is a tad below 9 scale inches [see graph/post 23], here you come along now, sounding like me before I came to my realization and confession about how I'd been wrong about C100; that it's really been .............the ties !! M