give it your best shot everyone

No model railroad pictures as yet but i home to have some later,, i have been busy building the childrens play area, it's almost done just need another load of chippings to complete it,,, the rabbit think's it's great 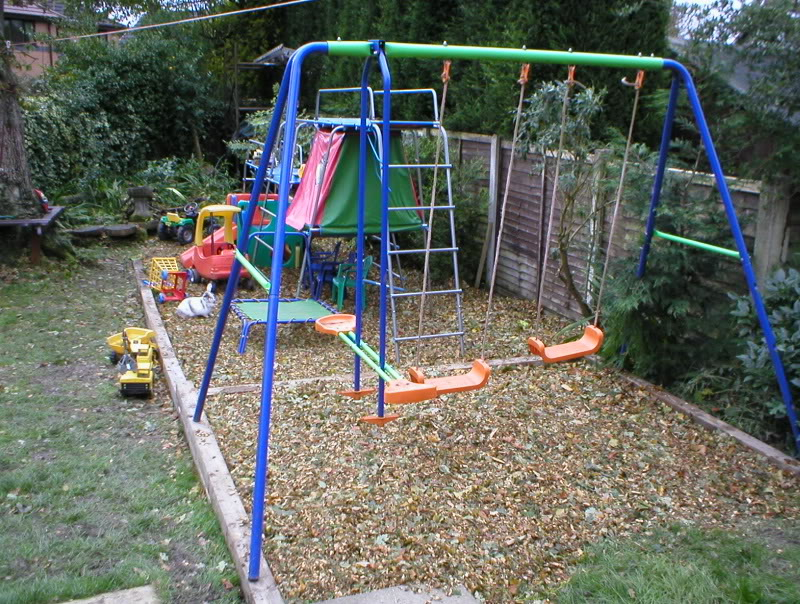 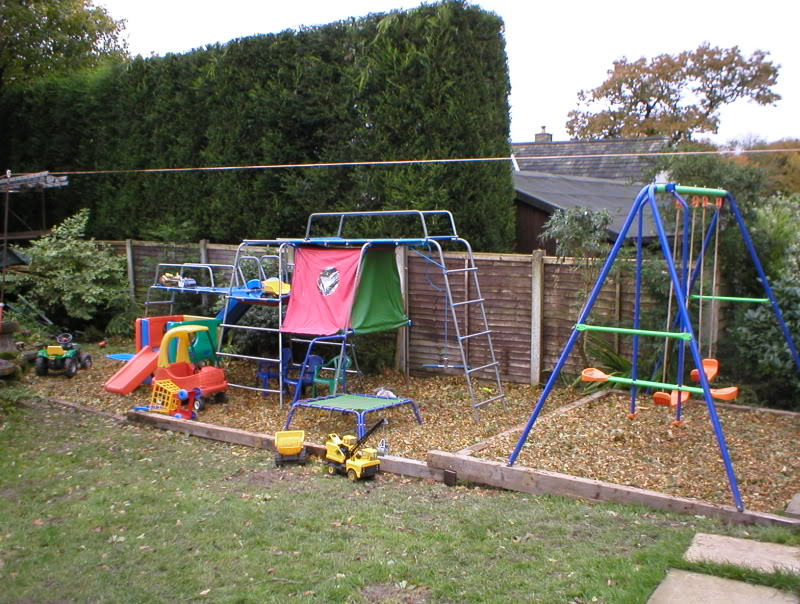 Wow Steve, again it looks like television: Extreem make-over in "Gardeners World"!!
"Ta, ta, till next week!"
This week no pictures but drawings. I posted them already in the thread with Mr p Pop's layout ( from Bangok)WPF 3-5 nov.
Or should I show them also in this WPF? 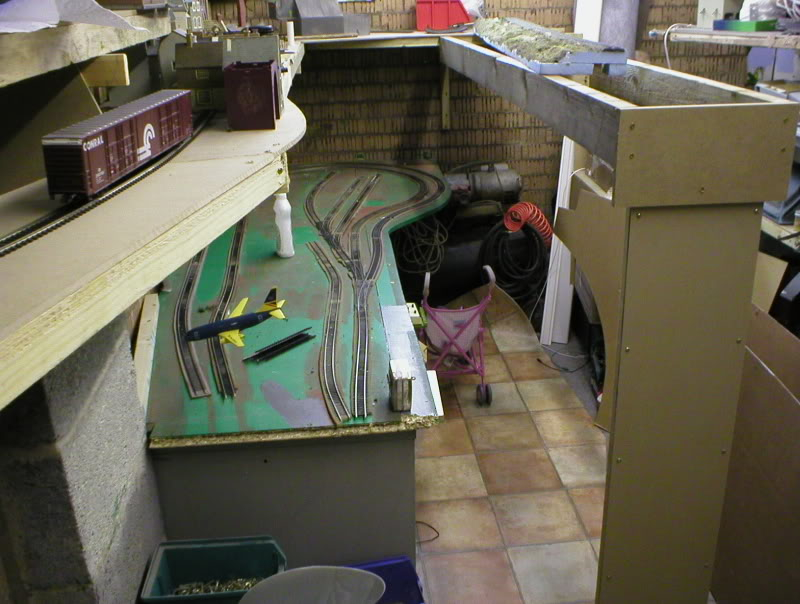 Wow, Steve, both the yard and the layout look great. You have been busy lately.

looking good Steve, Your going to have fun keeping those chippings in the right place, If its anthing like mine you will be raking them back lots

Ps the weather looks better there than in Oldham

Steve B Howly Steve you've got the same "8Wheel 2 hands" vehicle as we had for 9 years ago!
Jos

John bet the weather's not nicer anymore,, it's awfull now

grove den said:
Steve B Howly Steve you've got the same "8Wheel 2 hands" vehicle as we had for 9 years ago!
Jos
Click to expand...

Wow that ALMOST went over my head, then I looked back & saw the stroller!

So last weekend I dedicated a picture to Grandeman, this weekend it goes out to Ken L. Its not quite done yet, I still need the decals, and the roof needs another coat of black but otherwise she looks good alongside BNSF #7307.

jbaakko said:
So last weekend I dedicated a picture to Grandeman, this weekend it goes out to Ken L. Its not quite done yet, I still need the decals, and the roof needs another coat of black but otherwise she looks good alongside BNSF #7307.
Click to expand...

Wow Josh, that SD40-2 on the left looks mighty familiar!

Steve, sure wish I had the stamina to accomplish what you've done this weekend. Honey-dues and MRR work - those two always seem mutually exclusive for me. That peninsula is looking great BTW, amazing what can be done on a 13" strip of real estate!

OK I promised you guys some pictures, and I wasn't lyin' - here they are:

I did some shuffling [plus a bit of cutting and re-painting] of structures, and eliminated 3 major deficiencies of my layout. First of all, on my point-to-point coal trains, I had to split the train in two sections to load all the hoppers, and do some convoluted switching operations just to get the train pointed the right direction. I wanted a flood loader where I could load all the cars in a single train: Shove them in, pull them out - then do a 'runaround' on the passing siding. I already had the flood loader - it was an oversized coke bunker on my blast furnace highline. So I repainted it to match the New River mine, then surgically removed the original 'tipple' section which left me with the tall part, and voila: 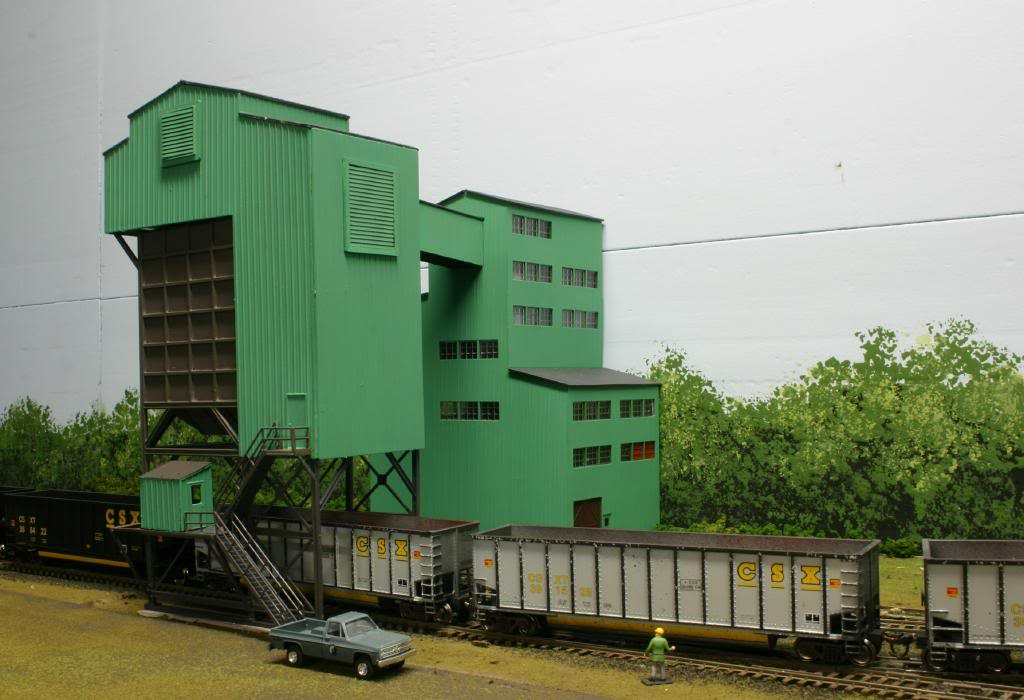 (Click here to see a BEFORE image of the mine)

Now I bet you're asking, What about the coke bunker? Not to worry - the original New River complex had just the thing I needed: (Click here to see a BEFORE image of the coke bunker)

On to Problem #2: The ingot stripper. Steel mills in the era I'm modeling (mid- to late-1990's) rarely, if ever, use the ingot process anymore; they've gone to continuous casting. So I decided to put someting else in that spot: A finished coils shipping facility like I had on my previous layout. 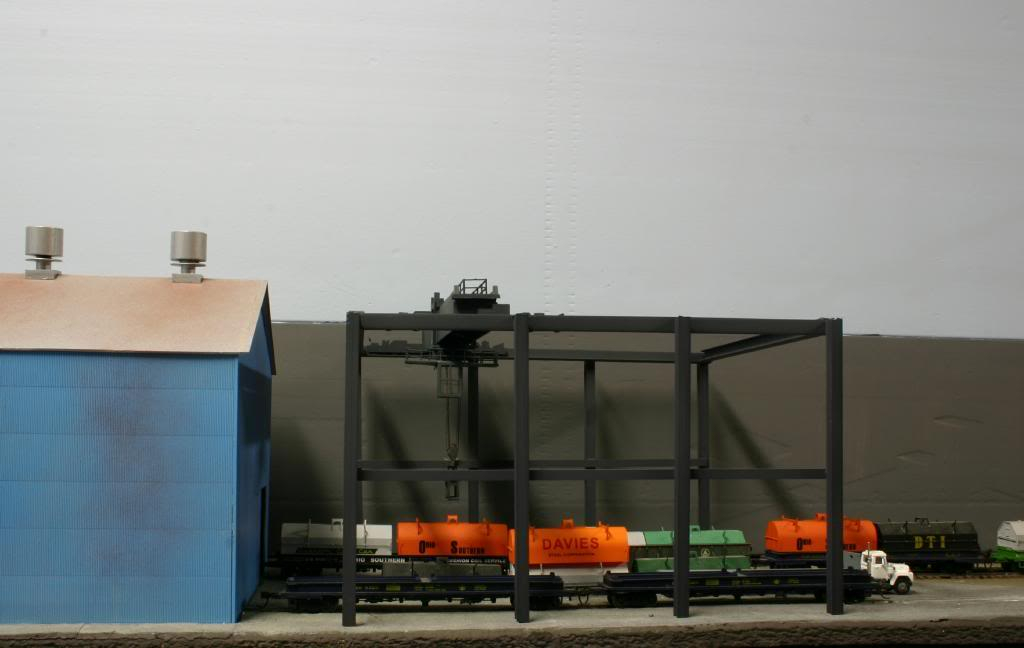 (Click here to see a BEFORE image of this view) (Click here to see a BEFORE image of this view)

This also took care of Problem #3: No "signature" structure/spur where I could spot the cars that deliver my final product - rolled steel coils. Now every freight car coming into the mill yard has someplace to go! I can assemble/receive a non-coal train of 16 cars (longest I can fit on the passing siding) to run between the mill and an off-layout staging yard, which I will build when I find another home for the clutter on the shelves...

Wow Ken, looks like you've been busy too! Thanks for the update!

Fantastic work Ken, imagine what fun you would have if your garage was only 8'6" wide like mine,,, tell you what, fitting some kind of industrial area on that peninsular WILL be fun, if i was into abNormal scale it would not be a problem but imagine Z, i could get an entire layout on there , maybe a backdrop on one side would work but that would obscure some of the view of viaduct so maybe not

Weathered, painted details and redecorated my Precision Scale On30 Galloping Goose this week:

Steve B: What do you meaN with:" AbNormal" (kidding)
SiNce last ceNtury ( 1968) I am a faN to scale N!
Ken: great chanches and progress too! Fine scratchbuilding!( right word?)+ painting
Last edited by a moderator: Nov 12, 2006

Bob, the galloping goose looks great with the FNR roadname

Nice vehicles Bob and great "painting"!
But...
Please can anyone explain to me what a "galloping goose" is/used for.
I am (still) not familiar how you call your types of trains/loco',s or freight-cars.......I still have to learn a lott!! I'm glad I can.

NIce work everyone. Ken, I have to say that every one of those kitbashes are a huge improvement. Good job.
R

grove den said:
Nice vehicles Bob and great "painting"!
But...
Please can anyone explain to me what a "galloping goose" is/used for.
I am (still) not familiar how you call your types of trains/loco',s or freight-cars.......I still have to learn a lott!! I'm glad I can.

When many railroads were faced with declining passengers due to the influx of autos and better roads, they tried to cut their losses in many ways. One way the Colroado Southern did was by placing large autos on the rails to haul the few passengers and mail they had. They expanded the operation by adding on trailers, then as in my model, replaced the car body with the front of a bus to carry more people. When freight revenue declined too, the trailers were converted to carry passengers too.

They didn't track all that well, and were thought of as "waddling" down the track like a goose. That along with their distinctive horns that sounded like a goose garnered them the nickname of "galloping goose". The railroad later capitalised on the name and actually lettered them with the galloping goose name.

I'm not all that knowledgeable - I have a book on the geese!

Thanks everybody for the kind feedback!

Jos, I believe the word you are looking for is "kit-bashing". Everything in the photos originated from a Walthers Cornerstone series kit.