Trying out a micro layout (or close to one).

The weather was perfect today for continuing painting the structures so I decided I’d get as much as I could done. I’ve painted the main components of the bakery complex. I’ll be painting the top of the dock piece and the stairs gray as well to simulate concrete. I’ve also begun painting the downtown district buildings Colonial Red. It looks brighter than it really is because of the sunlight and it still being wet but I think it’s a great base color! I’ll be weathering these buildings so the colors will definitely fade a bit. 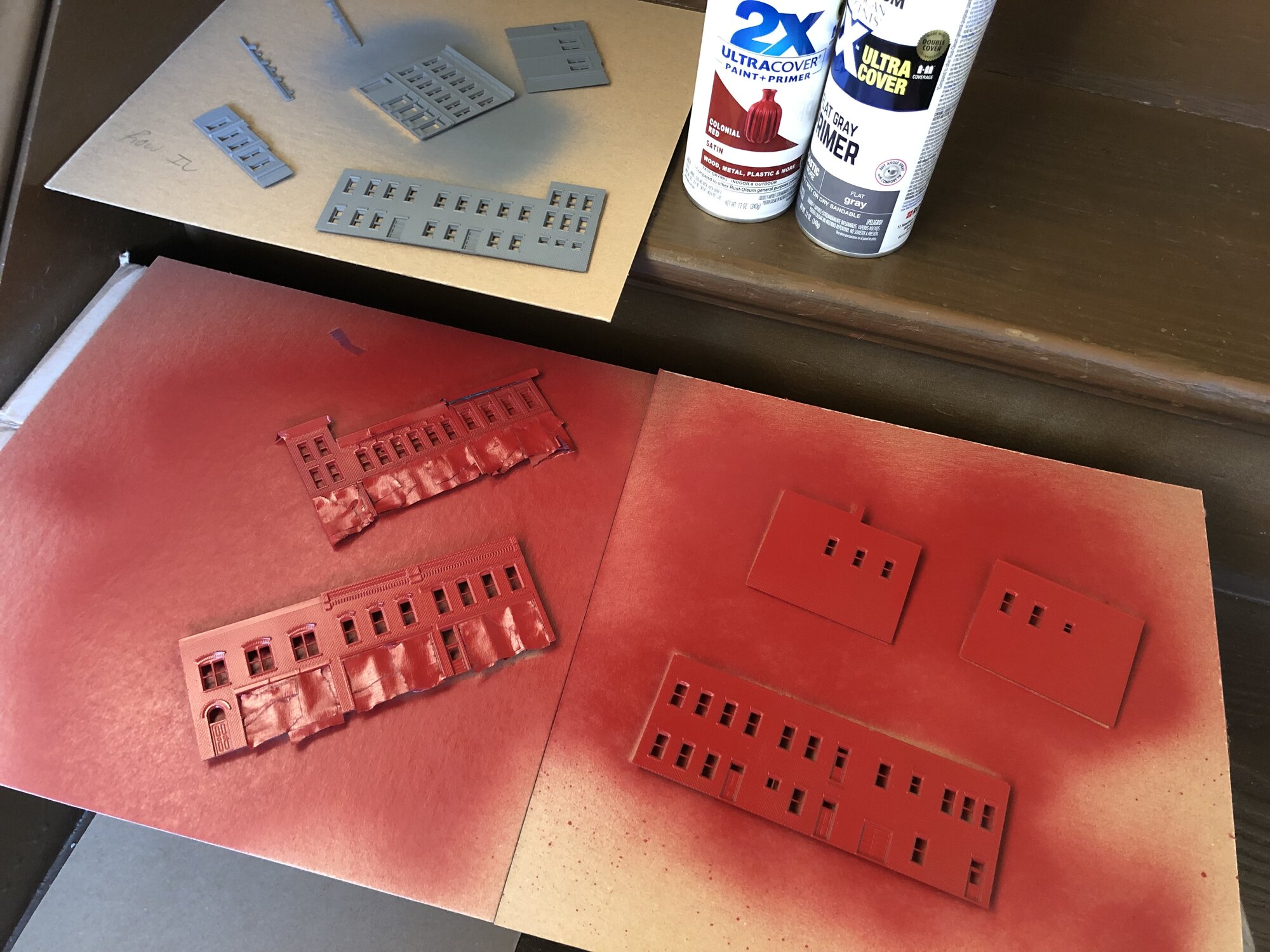 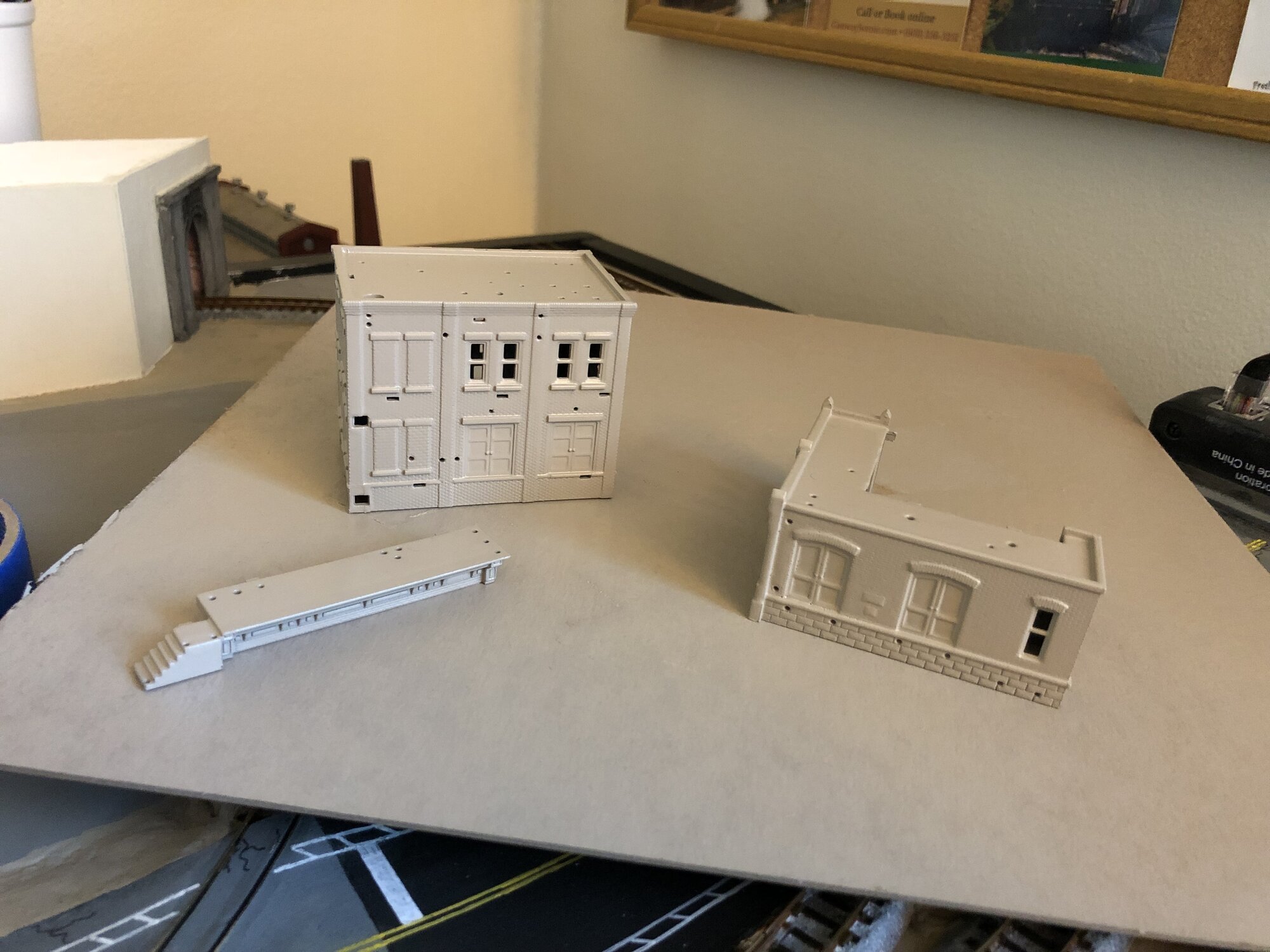 I’ll be doing some work on the layout later today but I figured I’d better start my day rail fanning, so enjoy this short clip of a local freight train passing through. Already ahead of you haha. Learned the hard way from my last layout.

Hehe, i got reminded about that the other day. I forgot one of the turnouts and now i am not sure how i am going to get it out to clean it out. I thought i had learned this lesson...O poop.
G

OleSmokey said:
Hehe, i got reminded about that the other day. I forgot one of the turnouts and now i am not sure how i am going to get it out to clean it out. I thought i had learned this lesson...O poop.
Click to expand...

I have had to “relearn” a few lessons here and there. Hopefully you can salvage the turnout!
G

I have completed the preliminary ballasting around the outer edges of the track. I need to touchup a few areas (as always) and then I’ll move on to ballasting between the rails. My weathering powder kit arrived yesterday so I’m hoping to have a chance to begin weathering the roadbed tomorrow once everything has a chance to dry. 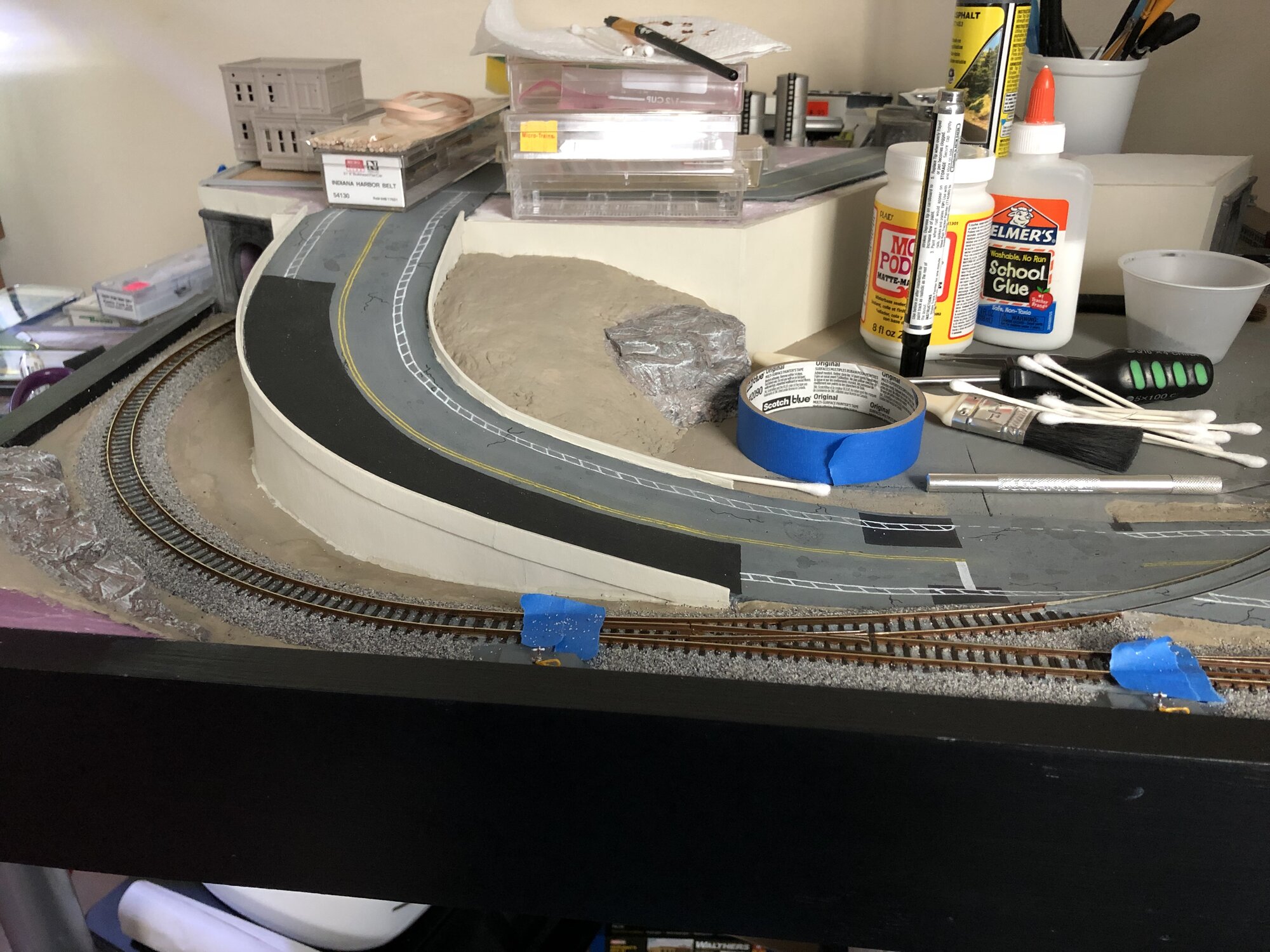 It took me a little longer than anticipated to complete the ballasting touchups so I decided that while it dries, I would begin weathering some of the structures.

I still need to paint the window sills and some details on the structures but I wanted to try some weathering techniques I’ve never done before and decided I’d wait on completing the detail work.

I originally tried a white wash on this structure to simulate mortar and it was not working out unfortunately. I believe that I may have applied too many layers of spray paint which left very little “space” in the grooves of the model. Since this method didn’t work, I moved onto weathering powders. This technique is entirely new to me and while the results are tolerable, I still had difficulty creating mortar lines. They are very subtle but present so at least that’s something.

For weathering powders I’m using Doc O’Briens. I started with white highlights, followed by grungy gray, and lastly with some grimy black. I sealed it all in with matte clear coat. 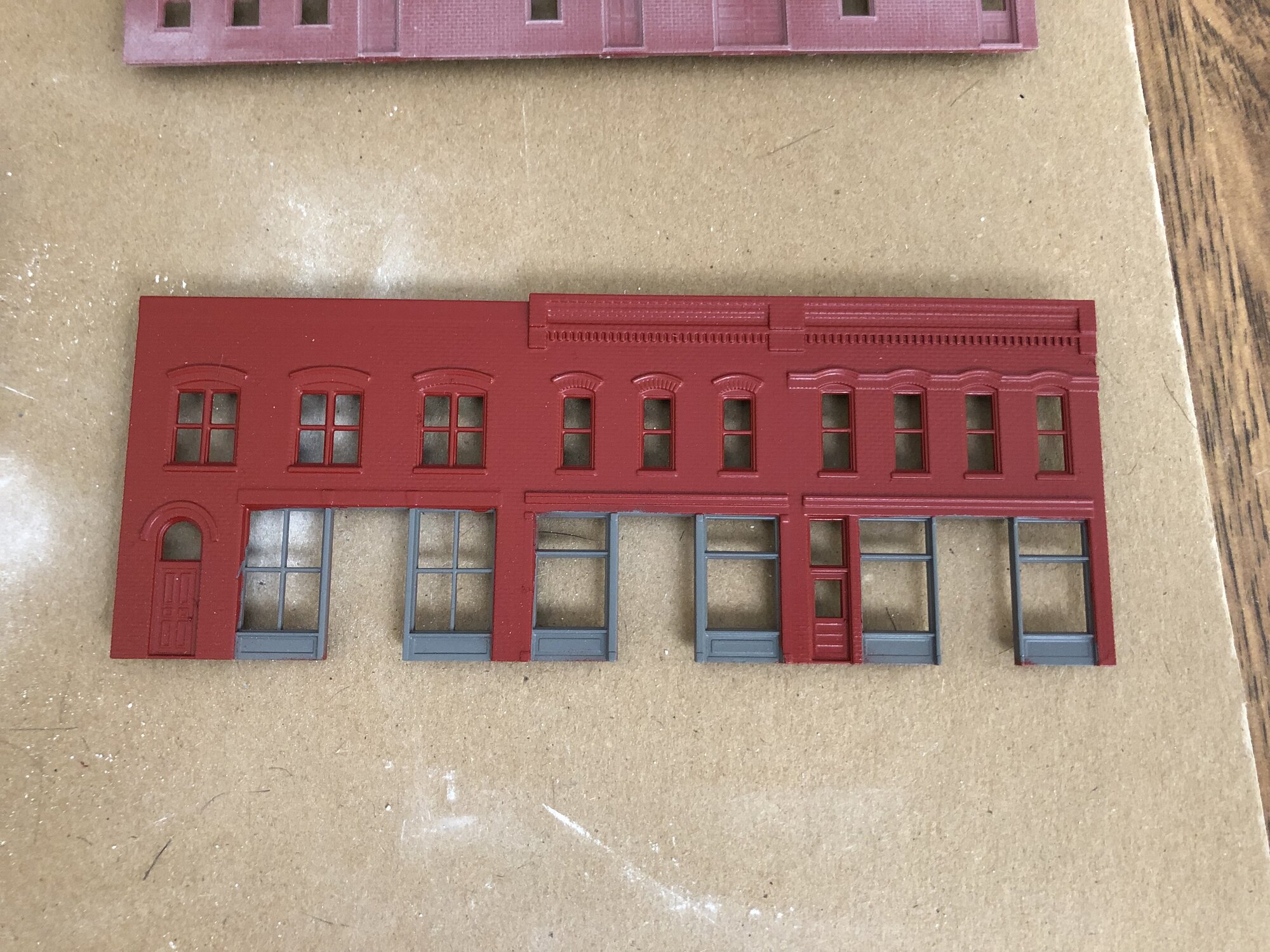 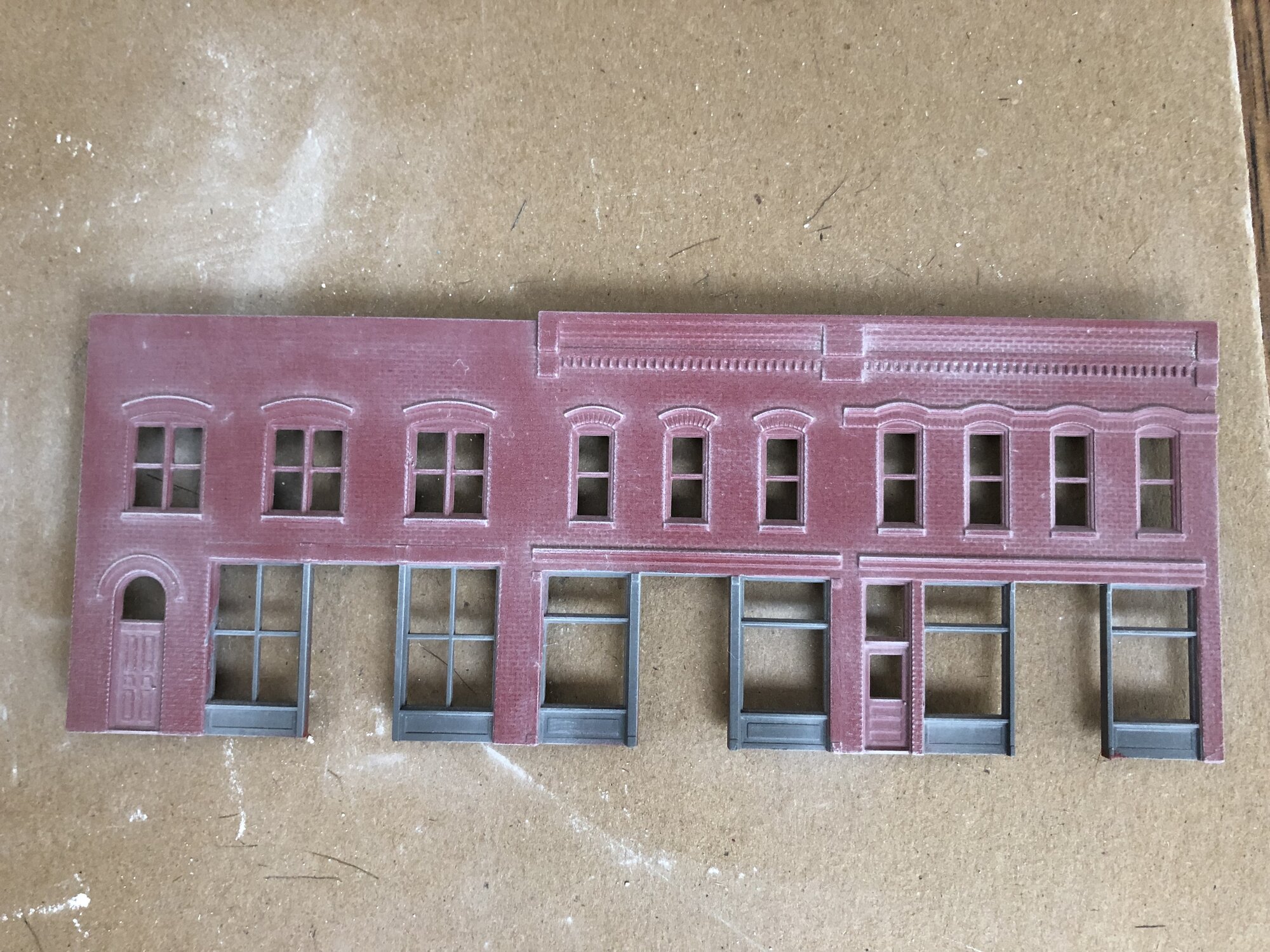 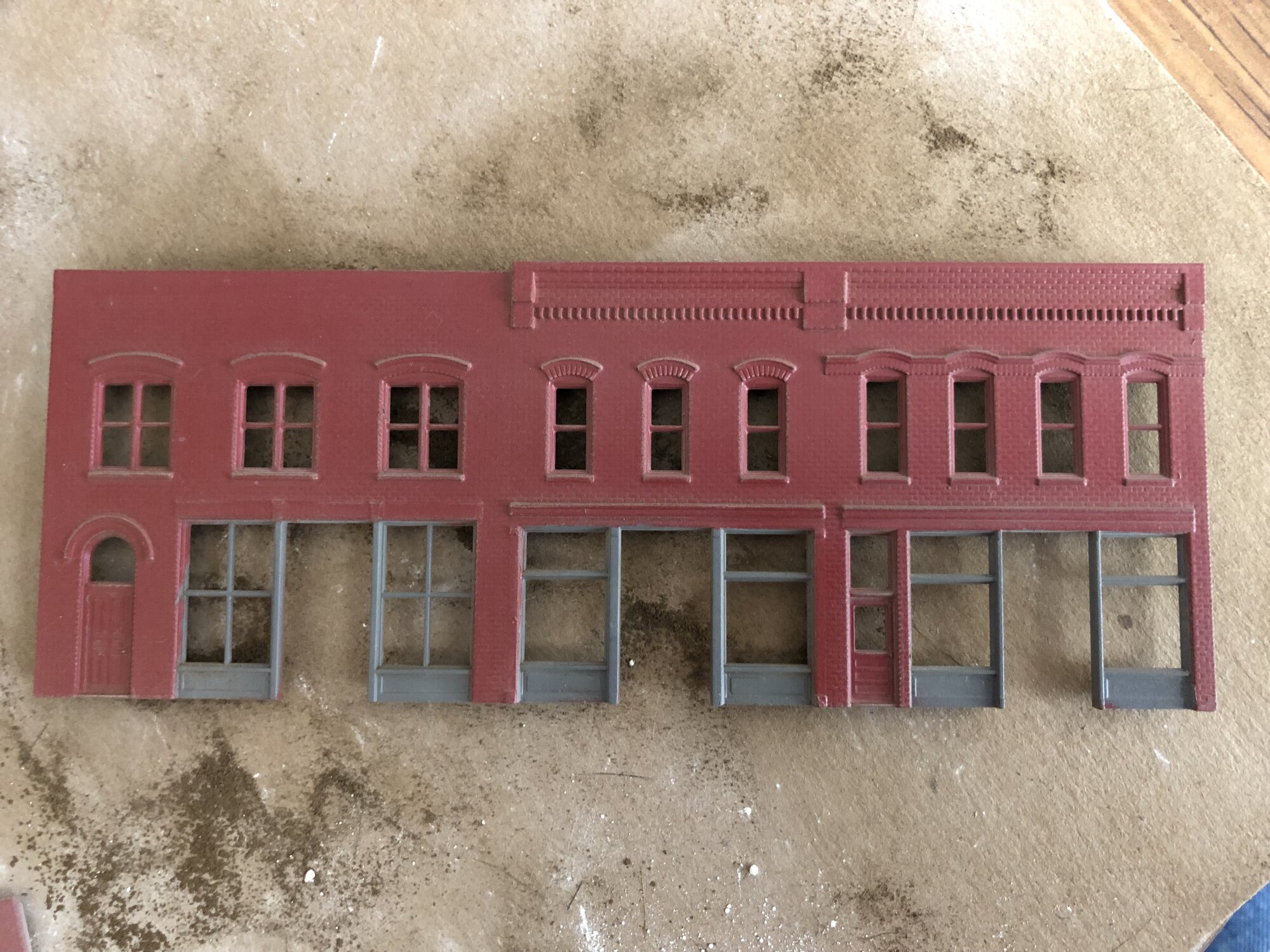 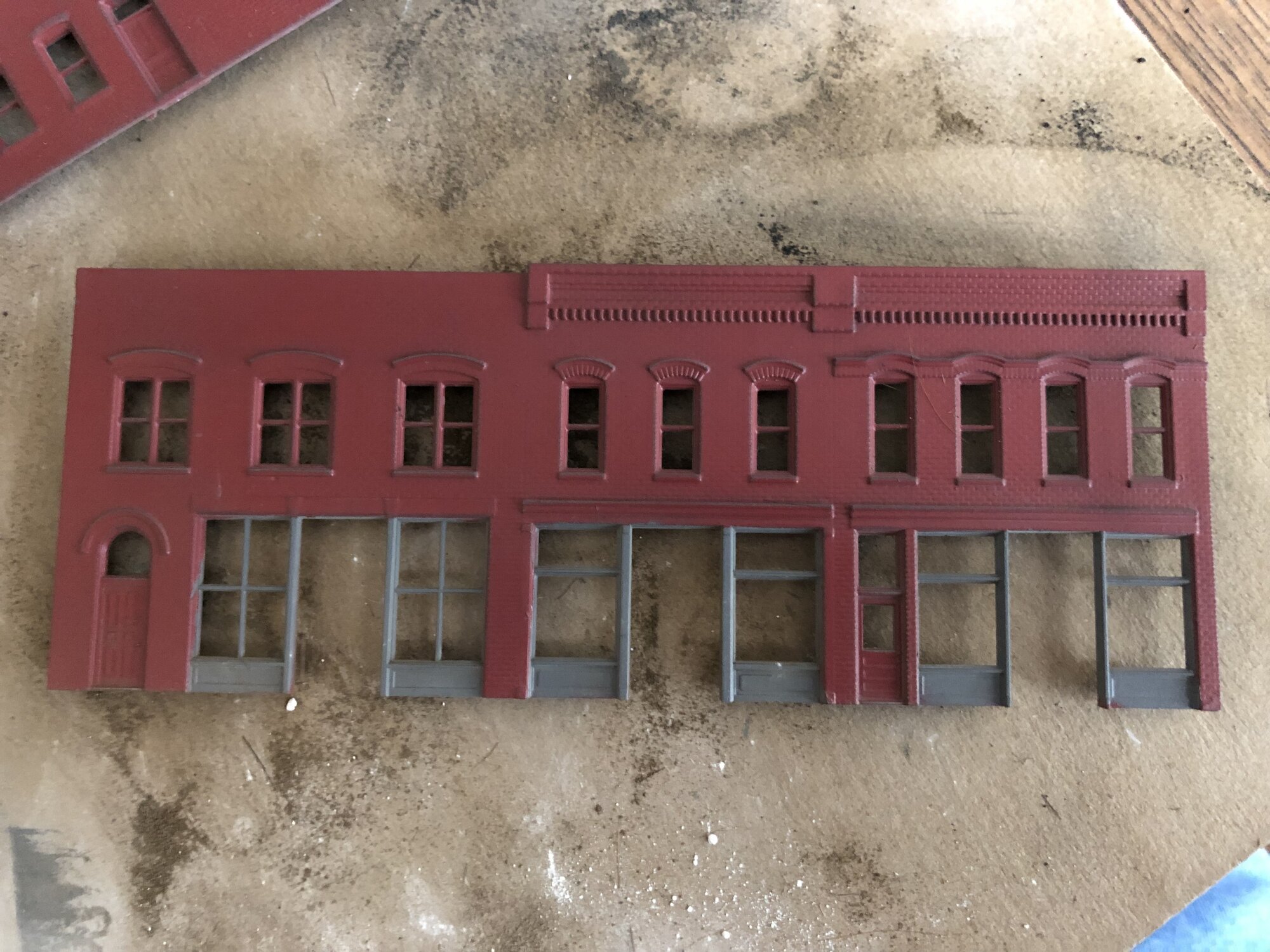 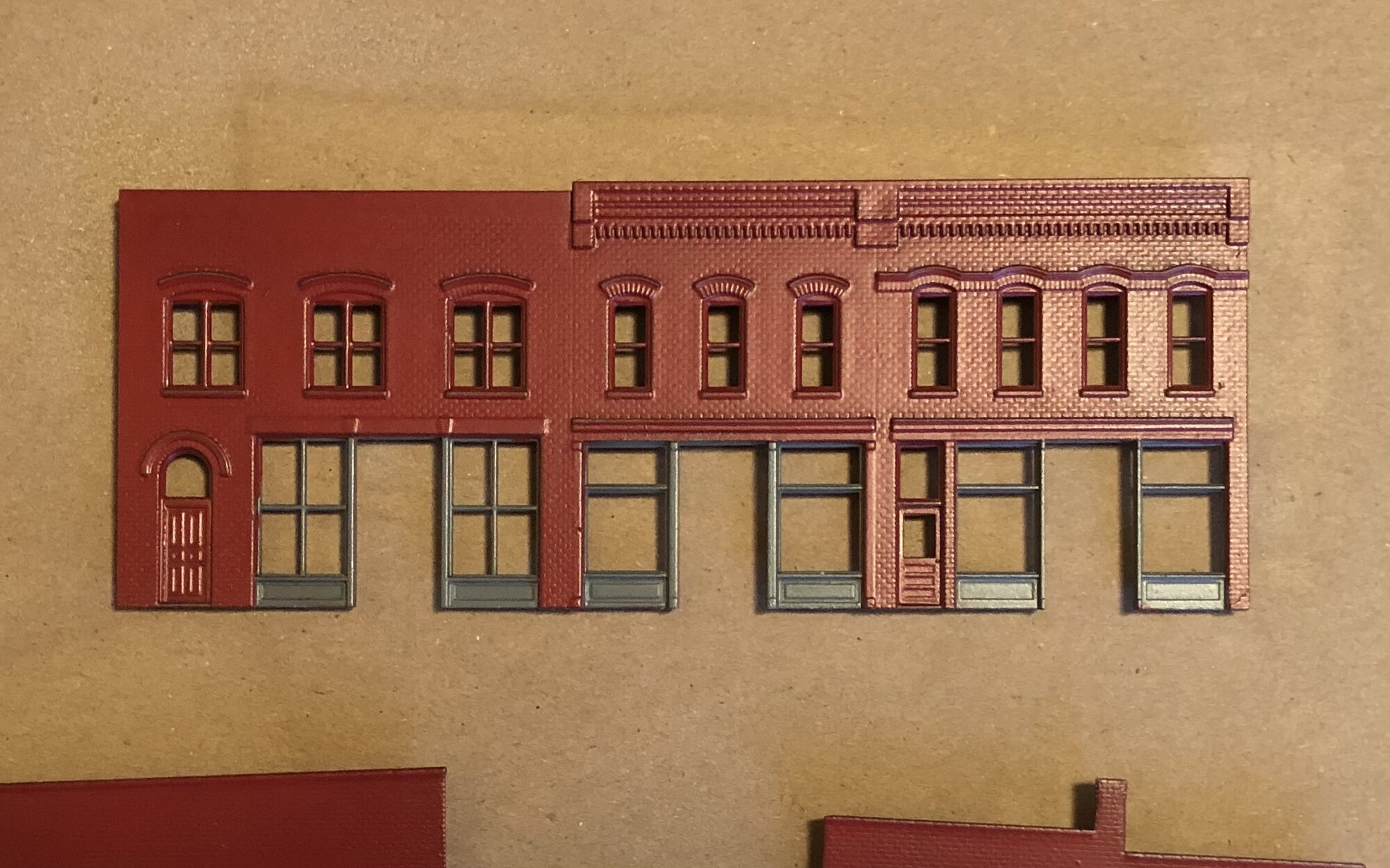 This last picture doesn’t do it justice for showing the weathering but this is the final result. I’ll try to upload better pics tomorrow.
G

Well this week hasn’t allowed for nearly as much time as I would have liked so progress is a bit slower but I’ve begun weathering the ballast with powders. It’s amazing the difference the powders make on the overall look of the track! 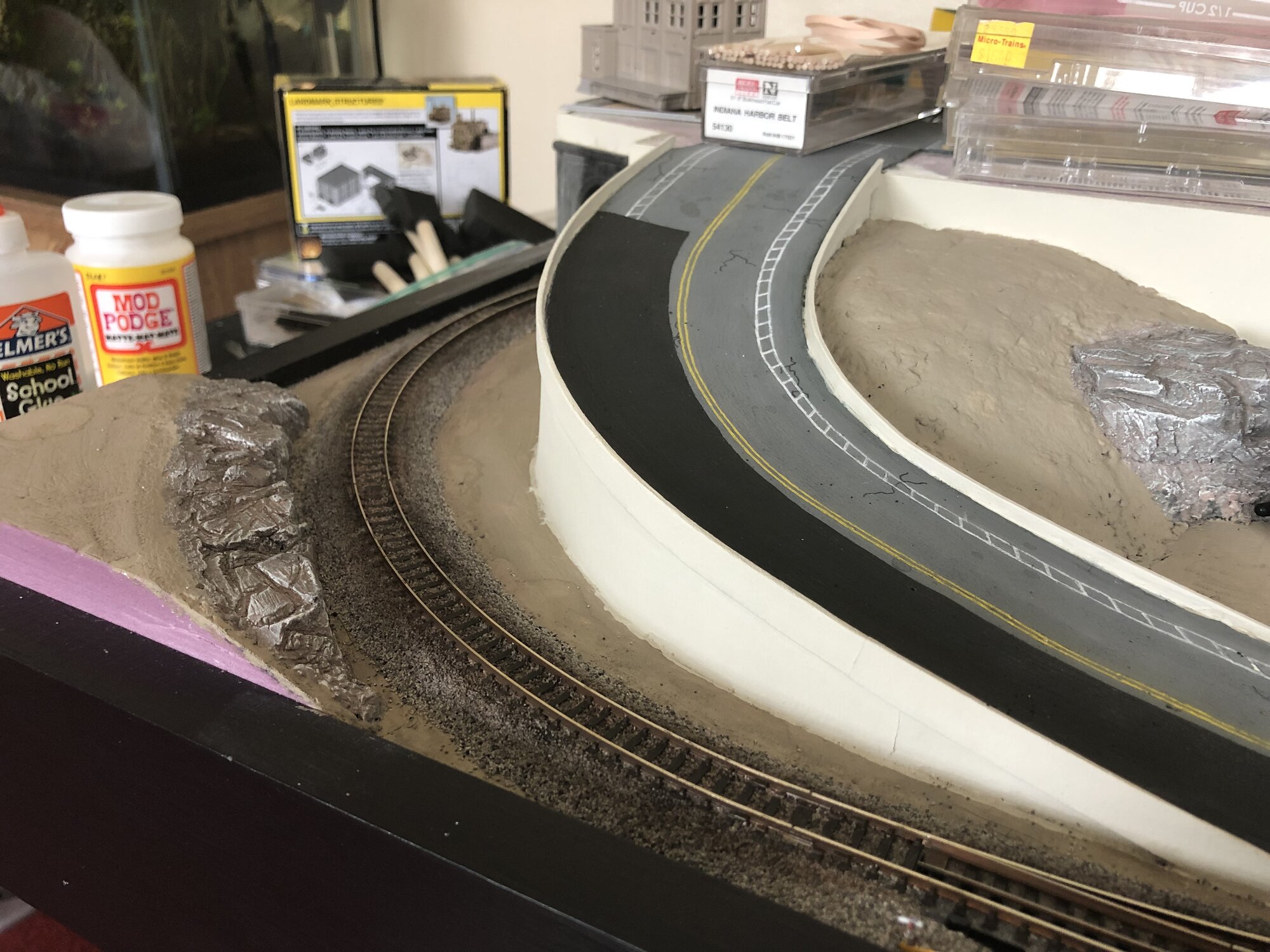 I will be finishing up the track later today and will hopefully have time to move onto some structure work.
G

I’ve begun experimenting with the weathering powders again on another structure. Not exactly the result I wanted but it’s a start! I will say I do like the look that powders give tho compared to other weathering methods. 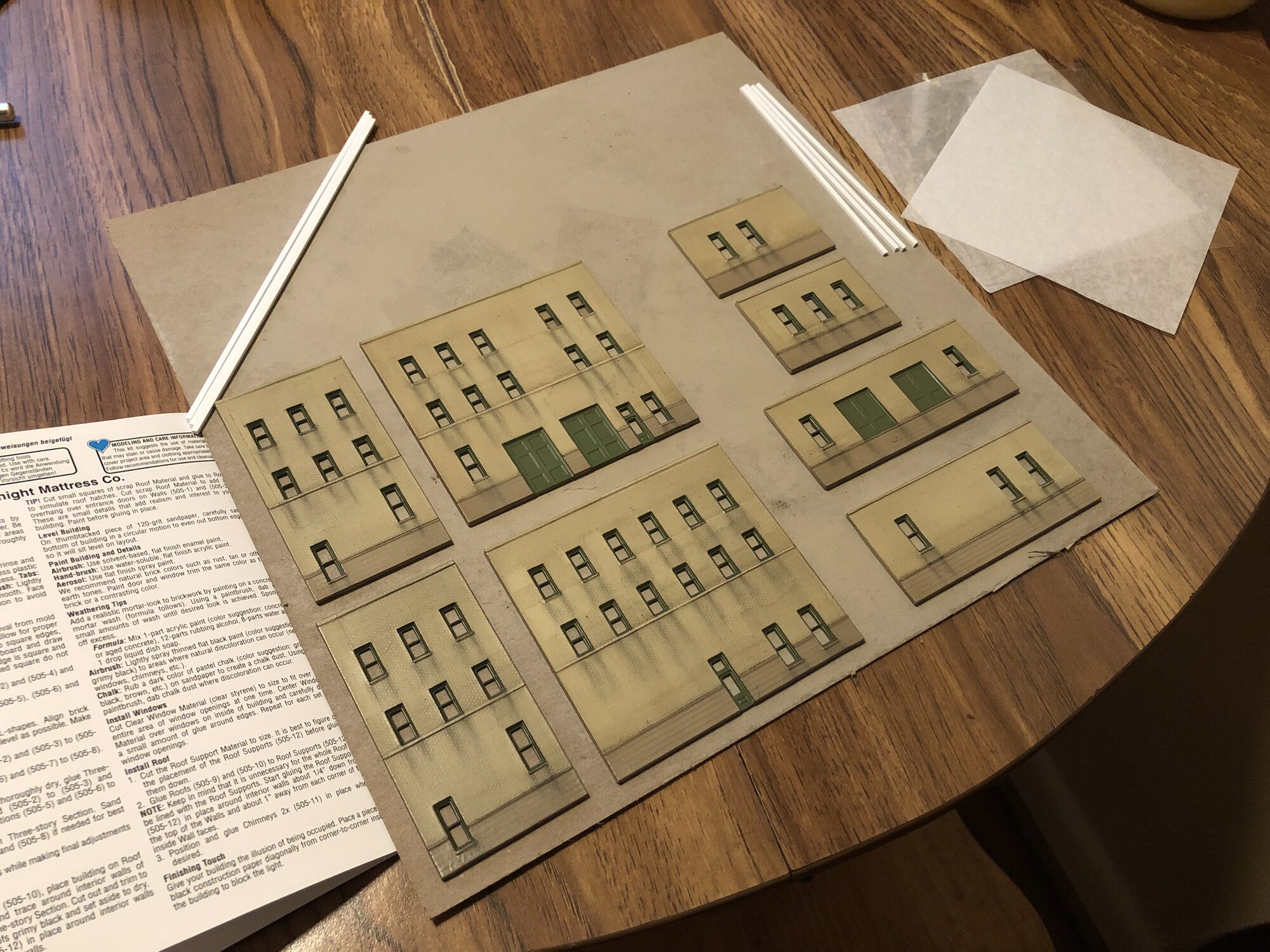 You’ll notice in the picture of some odd areas where the original paint was messed up when trying to touchup the windows using painters tape. It didn’t occur to me that having the tape only in a few spots and painting around it would create a very slight raised edge where the touchup paint meets the original. I tried to hide it with weathering but it didn’t quite work out. I do have a few ideas tho utilizing scenery and building accessories to hide the markings
Last edited: Apr 16, 2022
G

Progress has been slow this week but not for lack of trying. After weathering the mattress factory earlier in the week, I began assembling the structure and after finalizing it all, I quickly realized the lower portion of the structure was off set and not glued to the proper location. While it was only off about 2 mm, it would have made a difference in the placement of the roof and would have made things more difficult than need be. Not to mention, knowing me, I would stare at my mistake every time I used the layout while it slowly destroyed my soul.

Therefore, I opted to reposition the two halves of the structure. After doing this, I quickly realized this would make even more work for me because the adhesive used during the process removed the paint and weathering and would need to be touched up. Fast forward to today and it’s been touched up (although it doesn’t look as good as it did) and the two halves are once again joined together.

Moving onto the other project I’ve been doing…another structure. This one has been a smoother process but still tedious work. I have weathered the four main wall sections and have painted the storefronts and doors. These still need to be weathered. I opted not to paint the windows for this structure. It still needs some touchups, but this is where I’m at with it: 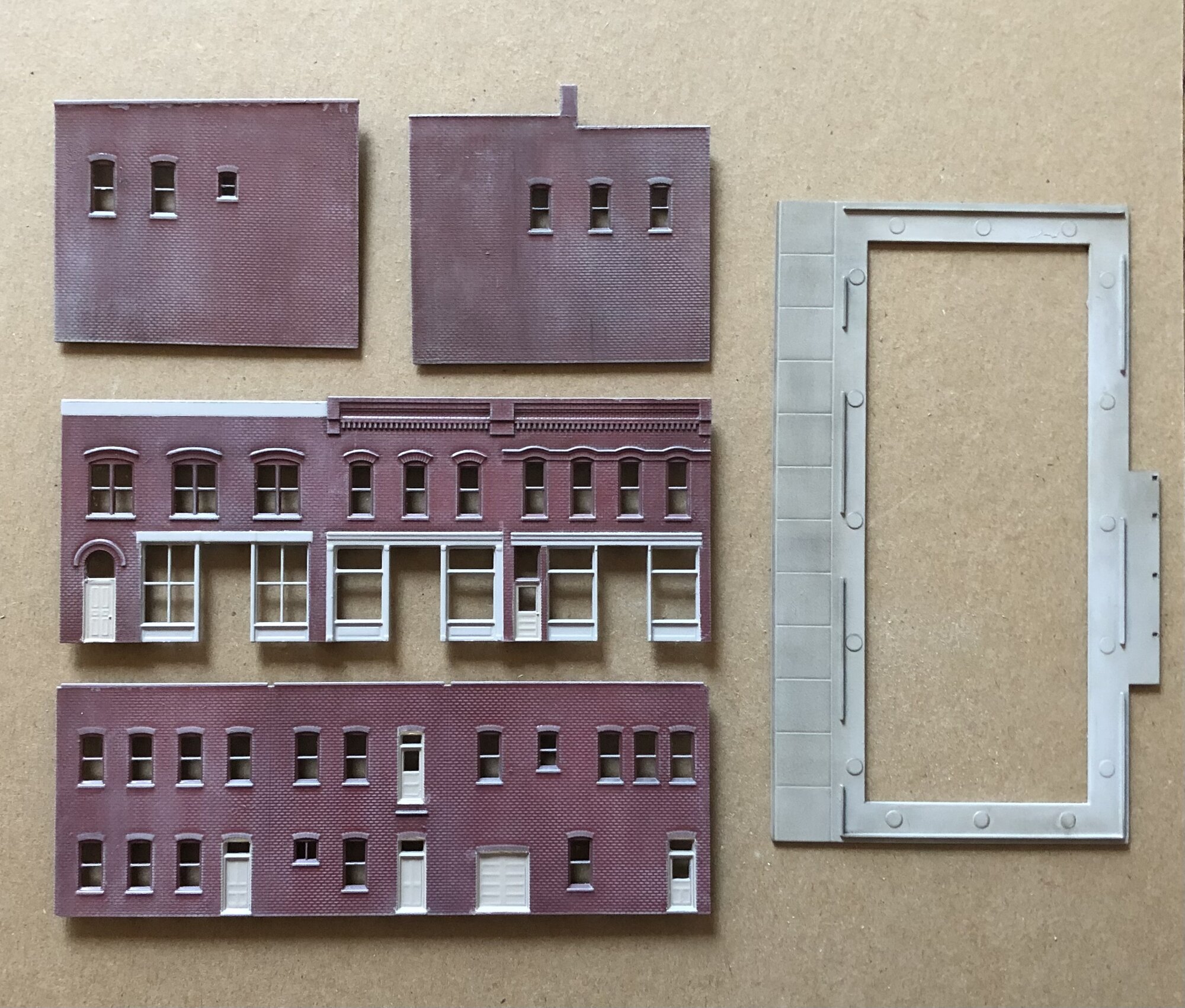 I tried to create a blend of darker and lighter portions to make it unique. Not sure how I feel about the results so far but having this building being only the second one I’ve ever built and weathered, it’s better than I thought it would be!
G

I received a couple things in the mail today!

First is a 3D printed gas station kit with a service shop that I opted to use instead of a house or similar structure. I really liked the look of this kit and knew I had to have it. There are many other smaller detail parts included but this is the basic structure. 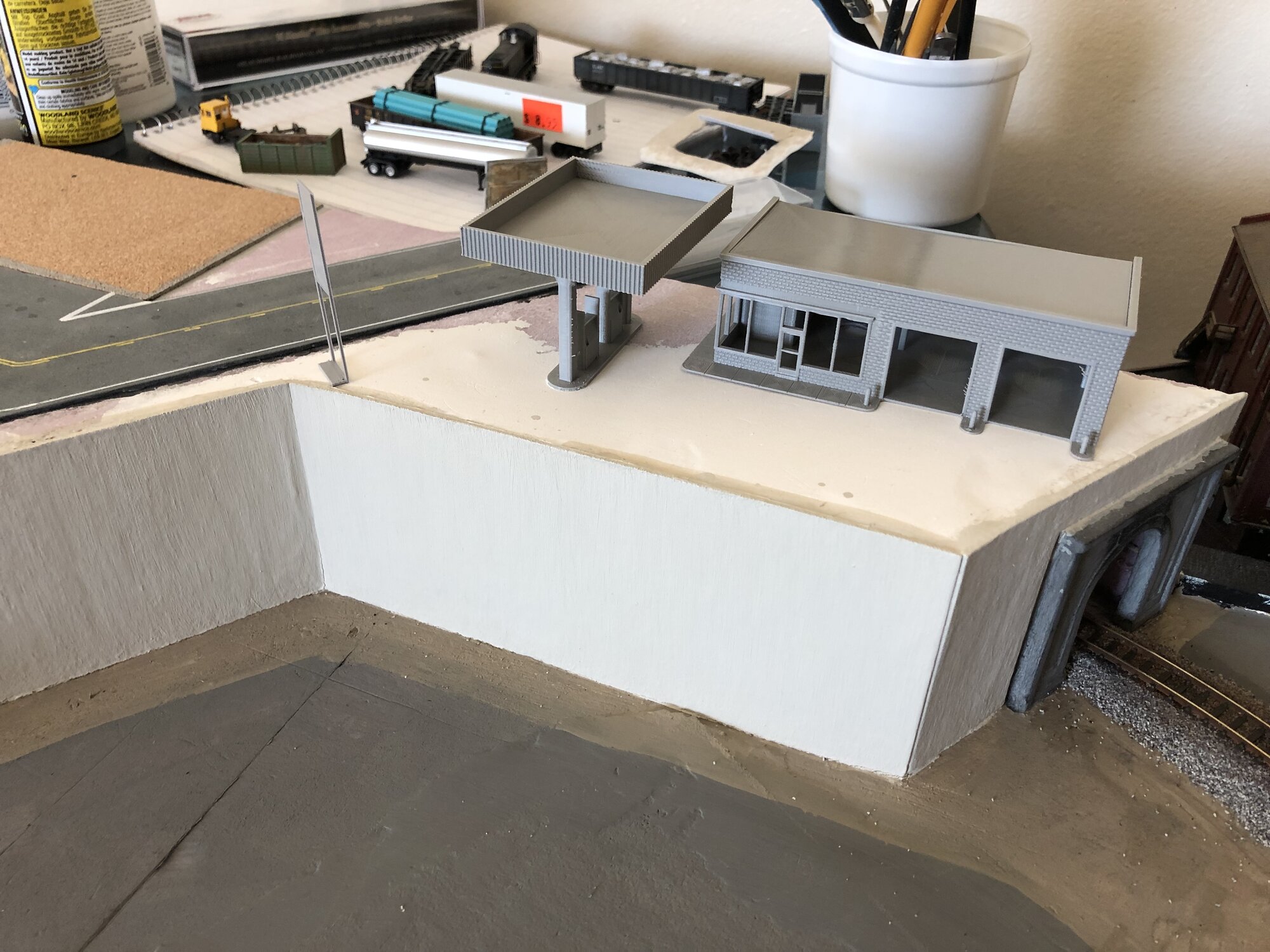 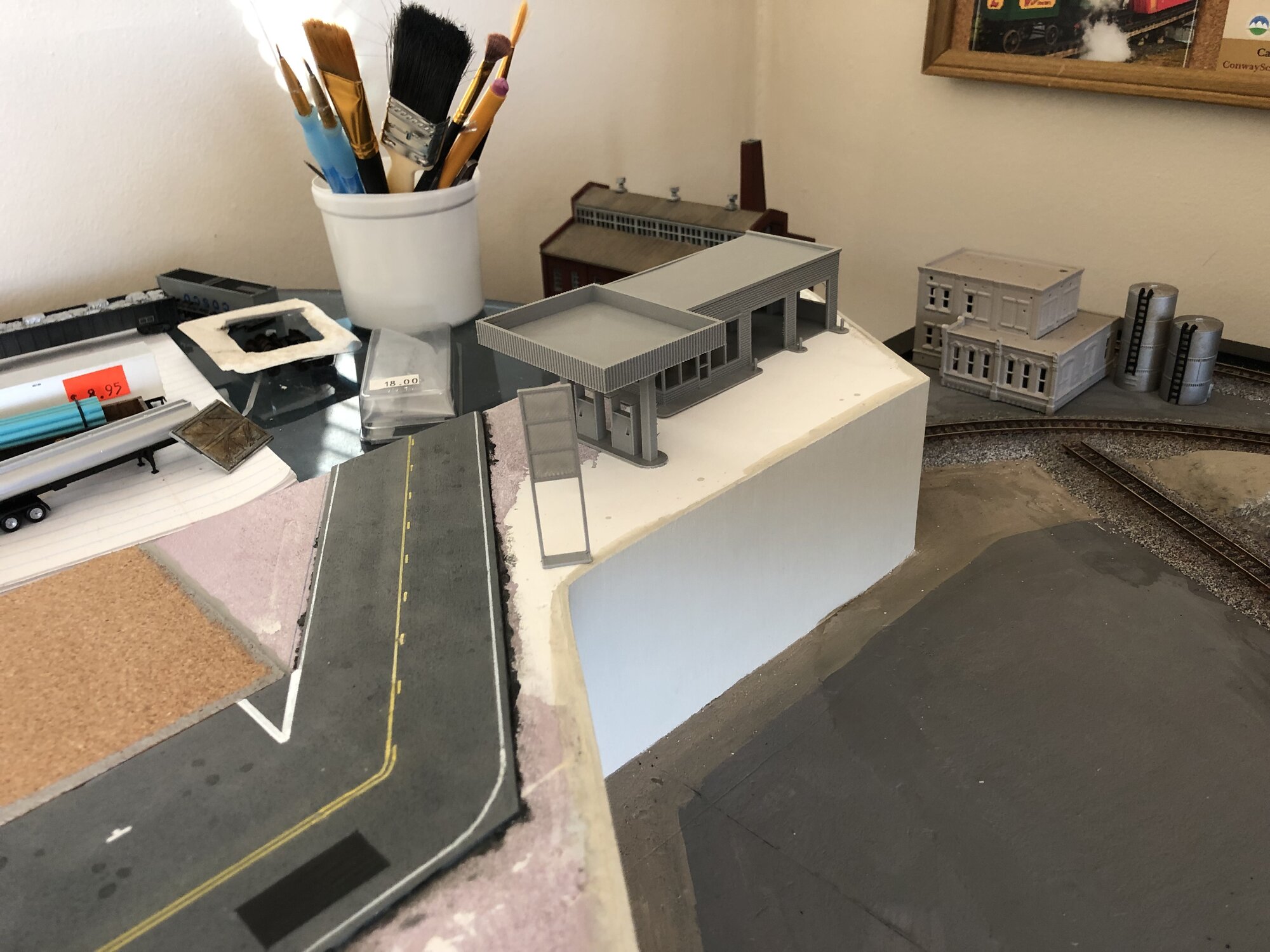 The second item I received is some graffiti decals which I’ll be utilizing on the structures, rail cars, and the retaining wall. 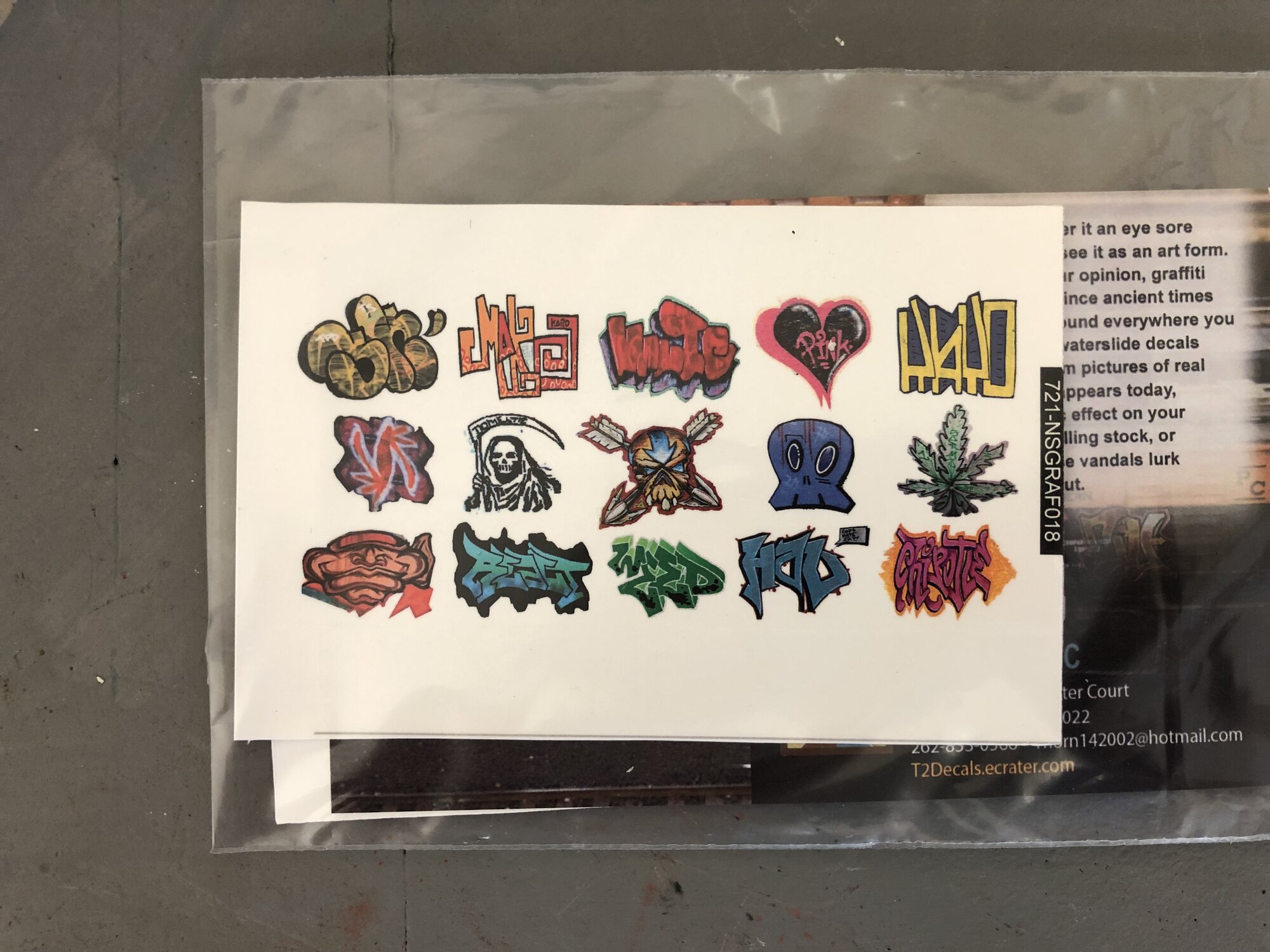 Haven’t had time to work on the layout this week as I spent most of it in Florida but I have returned! I spent a few minutes applying some decals onto the retaining walls today. 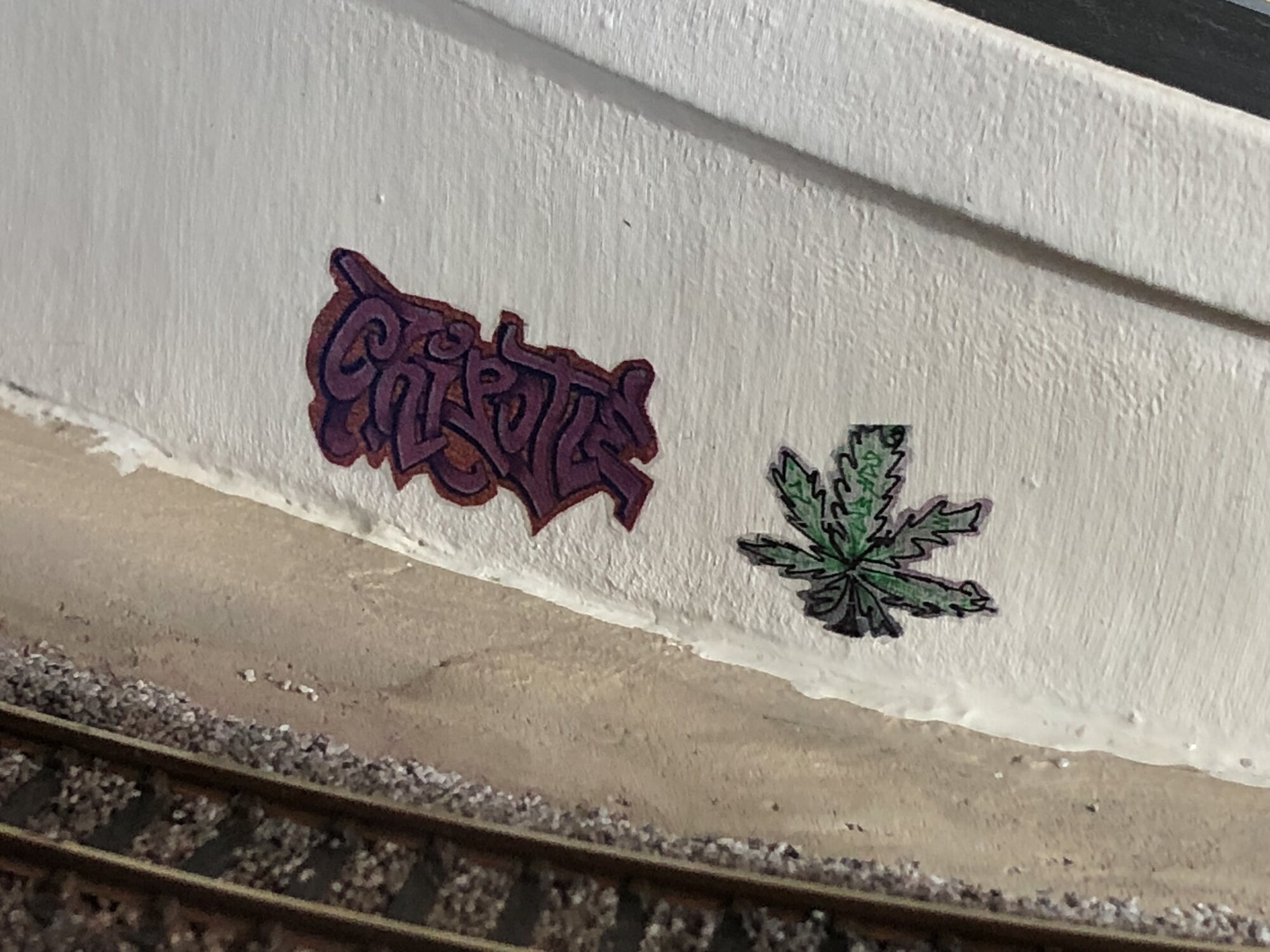 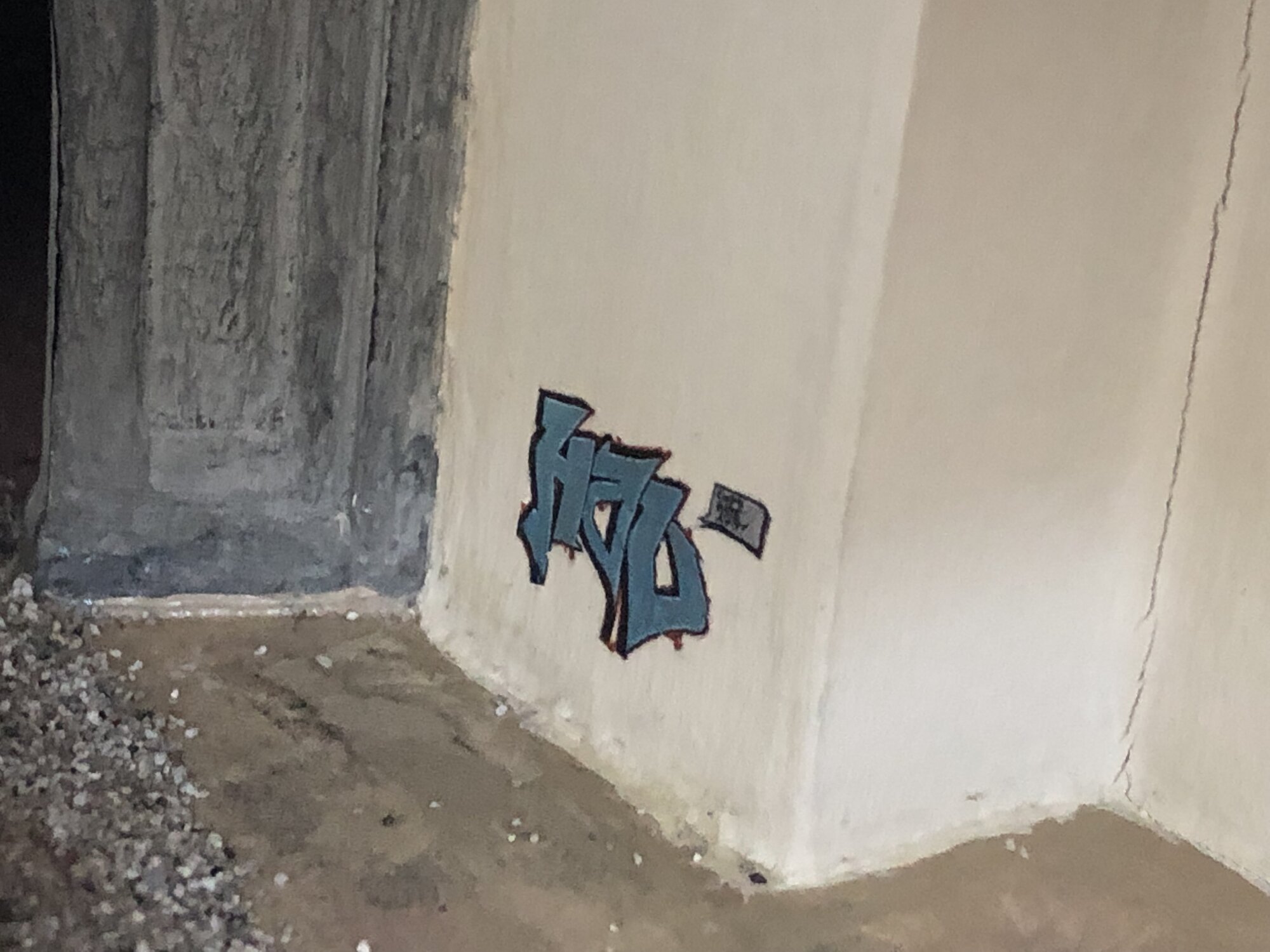 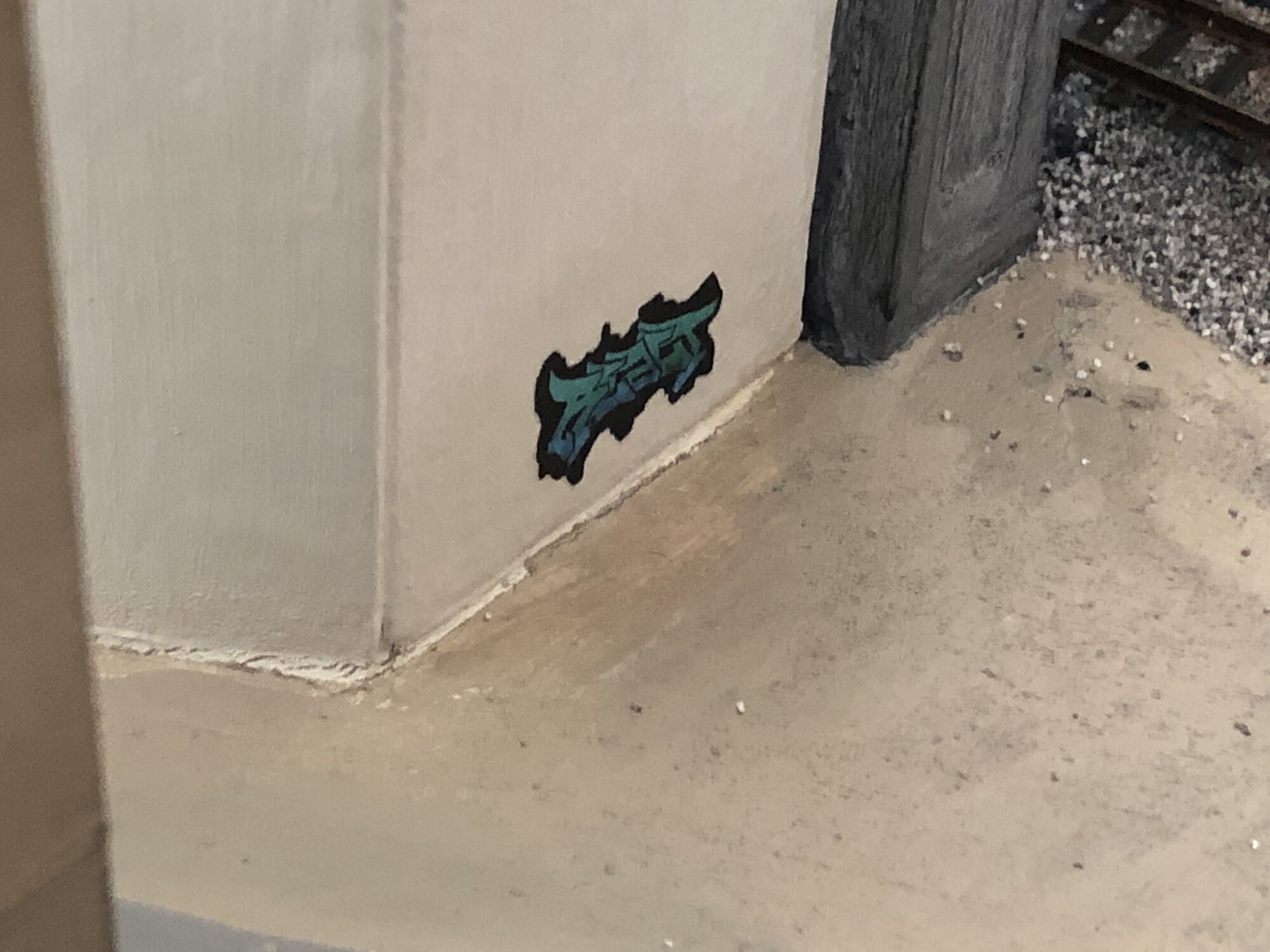 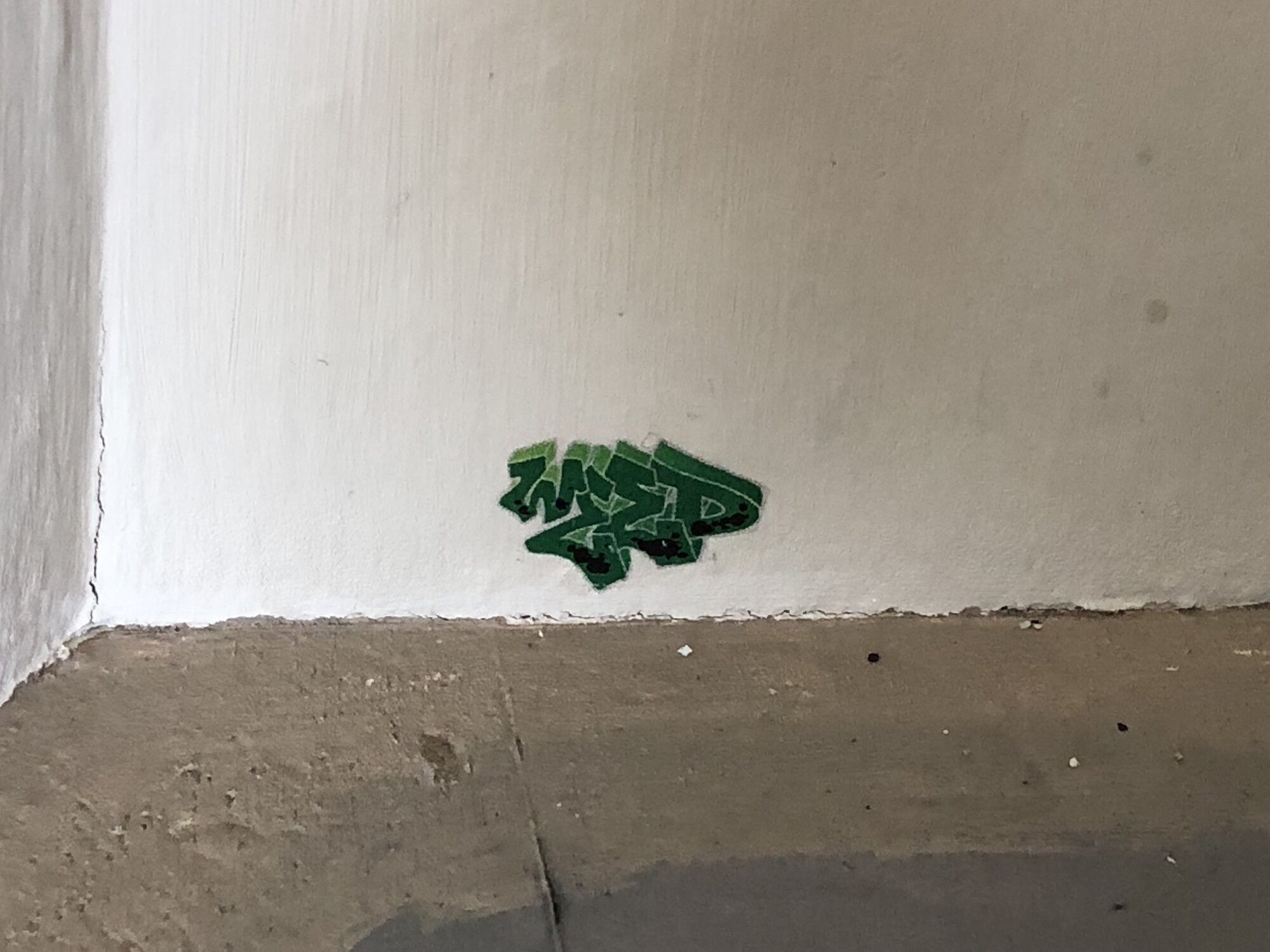 When I get a chance this weekend, I’ll spend some more time applying a few more decals and weathering the retaining walls.
G

A bit more progress for my Merchants Row III kit. I’ve completed all weathering and have applied the provided interior curtain/shade decals. I still need to paint the cornice and storefront doors as well as apply the storefront window decals for the bicycle shop, plumbing supply store, and photo studio. Once that’s done, I’ll get the main four walls assembled. GuilfordRailman said:
A bit more progress for my Merchants Row III kit. I’ve completed all weathering and have applied the provided interior curtain/shade decals. I still need to paint the cornice and storefront doors as well as apply the storefront window decals for the bicycle shop, plumbing supply store, and photo studio. Once that’s done, I’ll get the main four walls assembled.

WOW! Definitely looking far better than my attempt, how many structures do you think you'll need ?
G

WOW! Definitely looking far better than my attempt, how many structures do you think you'll need ?
Click to expand...

I opted to include a total of 5 structures for the layout. Two industrial buildings, two downtown district buildings, and a gas station.

So far the only one nearly complete is one of the industrial buildings. It’s the Goodnight Mattress Factory kit. The other structures are at various levels of construction.
Last edited: May 3, 2022

GuilfordRailman said:
I opted to include a total of 5 structures for the layout. Two industrial buildings, two downtown district buildings, and a gas station.

So far the only one nearly complete is one of the industrial buildings. It’s the Goodnight Mattress Factory kit. The other structures are at various levels of construction.
Click to expand...

You intend to add lighting as well?
G

Smudge617 said:
You intend to add lighting as well?
Click to expand...