This weekend i tore out a section of benchwork and re built it so i get more yard tracks, this will be a small industrial area with a British theme, for my new trains. the era is early 1990's, an era which saw massive change, any loco could turn up on any job, new train operating company's formed such as Loadhaul (below) , Mainline, Freightliner, and a few more besides. 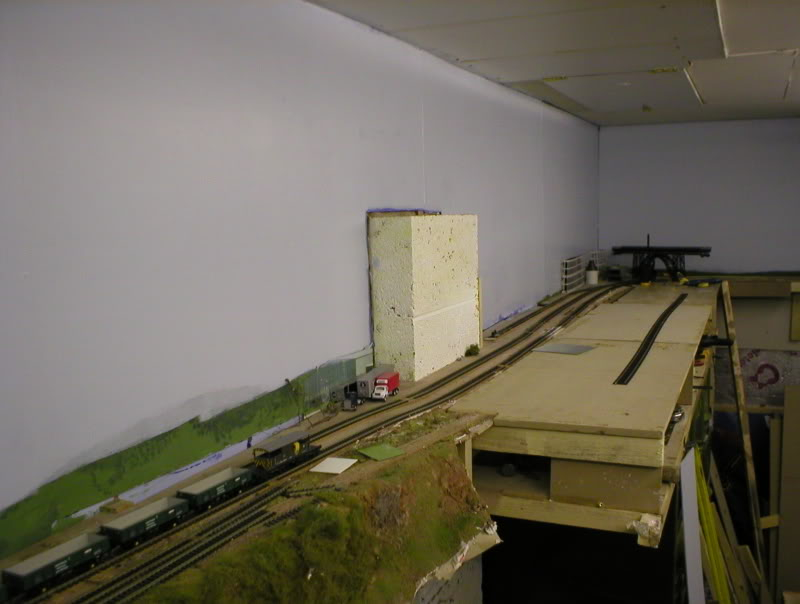 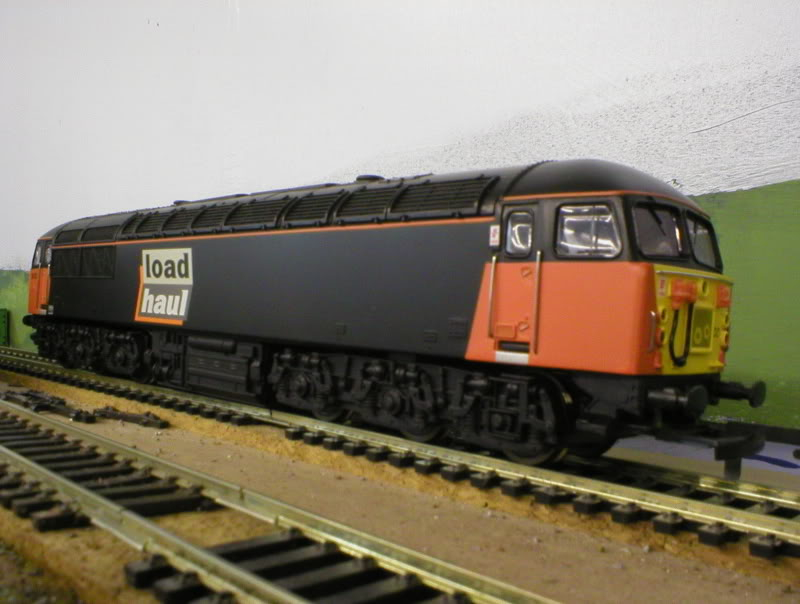 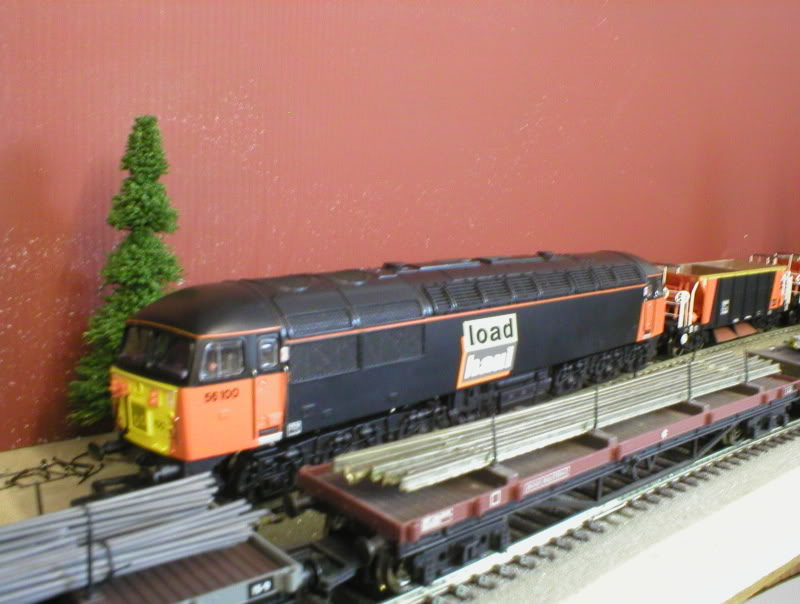 yesterday i got this bodyshell for a class 57 for £7, the detail is very good with seperate handrails, lamp brackets, stainless steel etched grills and rotating cooling fans, this model will be re painted into British rail blue 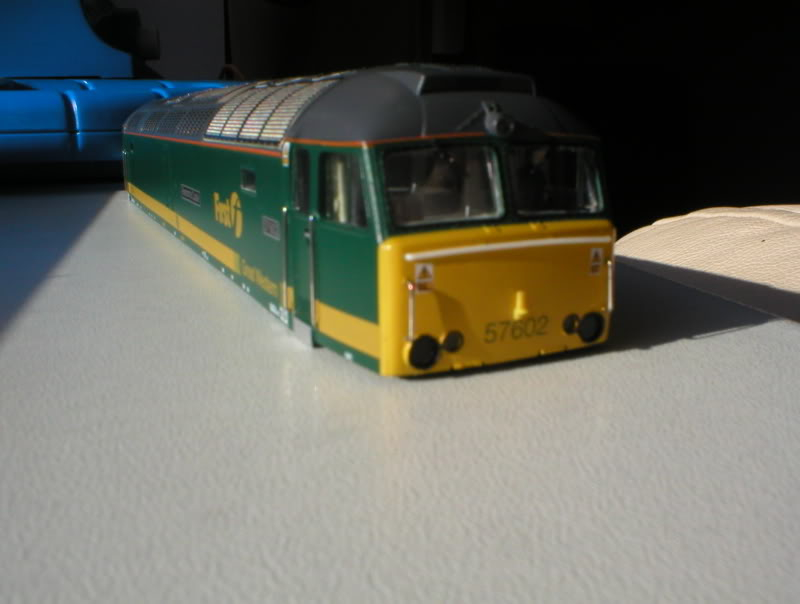 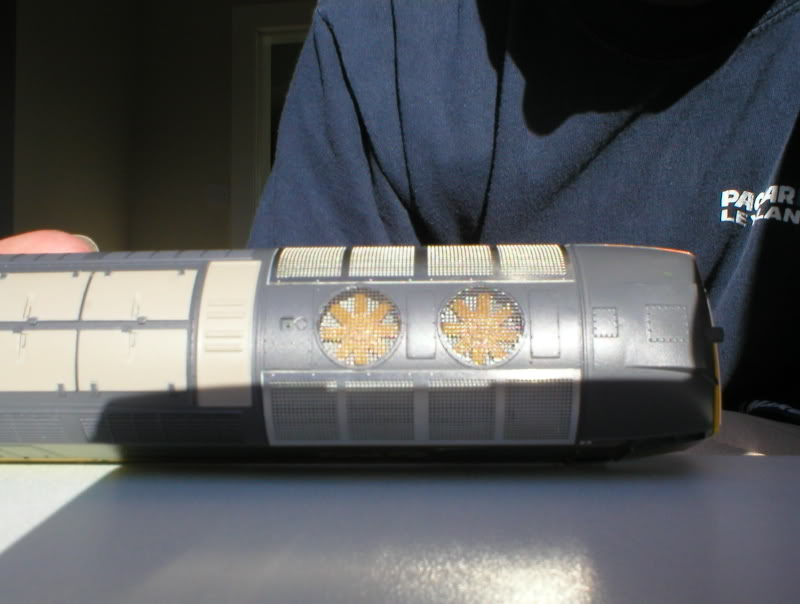 Still waiting for this class 57 freightliner loco to come,,, the 57's were a rebuilt 47 with a refurbished SD40-2 engine transplanted into them,,, so i get the best of both worlds, British trains with American sounds 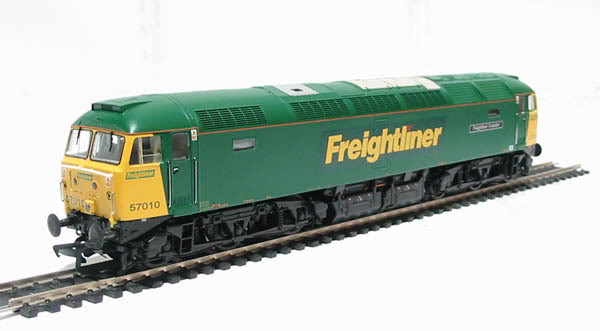 Steve,
Is that class 56 a Roco product, or Lima, or Hornby OO or what? Just curious. It looks great.

Jimmy, it's a hornby model, it only cost £23, the trouble with Hornby is the motor, it's a ringfield unit built into the leading truck, and the frame is plastic and way to light, but Bachmann or any of the other manufacturers don't make a 56 so it's the only option for now

today i got my 57, these are a very well built and detailed model's, much better than Hornby, you get all wheel drive, a very heavy chassis, directional LED head and tail lights and they are DCC ready. 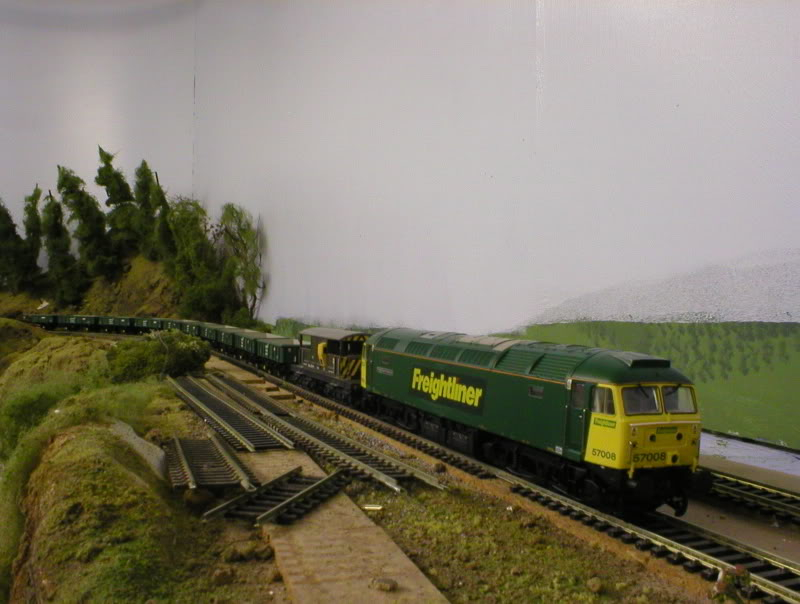 Steve B said:
,,, the 57's were a rebuilt 47 with a refurbished SD40-2 engine transplanted into them,,, so i get the best of both worlds, British trains with American sounds
Click to expand...

Steve that's really cool! Does Don Burgess have any online videos of English diesels that sound like American geeps or F-units?

cheers gent's, be even better when were DCC'd up with ESU sound decoders
Ken how bout this class 35 diesel hydraulic on my local East Lancs railway
Last edited by a moderator: May 16, 2007
N

Lookn good Steve, your getting quite a collection there

Yes, now got almost two filing cabinet drawers full of trains,, don't tell the CFO.
The next stage is to buy four hollow core internal doors for the new project, a portable display layout which will go to show's,,,hopefully, with the main theme being a quarry and ballast dump

Steve B said:
Ken how bout this class 35 diesel hydraulic on my local East Lancs railway
Click to expand...

Wow Steve, that one really barks! Thanx for the link
R

Steve, you are really moving along well. I tip my hat to you for your progress.

Your FreightLiner looks awesome, Steve... looks like you are moving right along with your layout.

done some yard work today, this is the new layout of it, at the heart is the Walthers Glacier gravel plant, on this railroad it re cycles old ballast, washes it then re loads it into ballast cars ready for dispatch. The excavator over the track is where a steal gantry will be built over the track to unload hopper cars full of used ballast, it will be dropped into a chute and carried down a conveyor represented here by the white pvc conduit to the gravel plant for screening, washing and re loading into waiting ballast cars, that's the theory anyway. 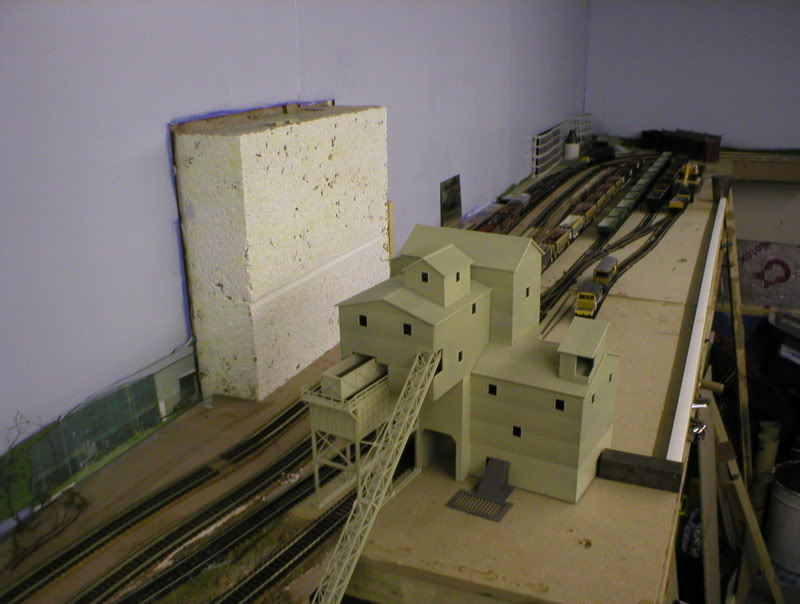 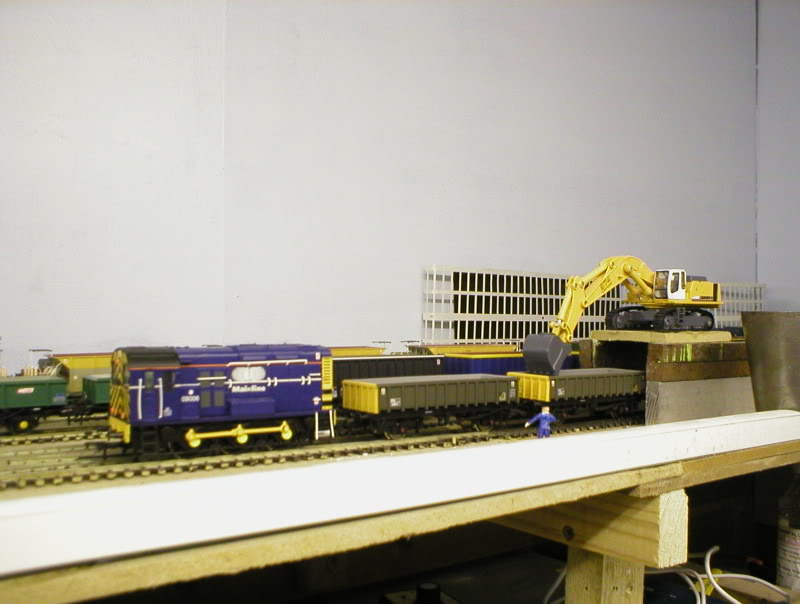 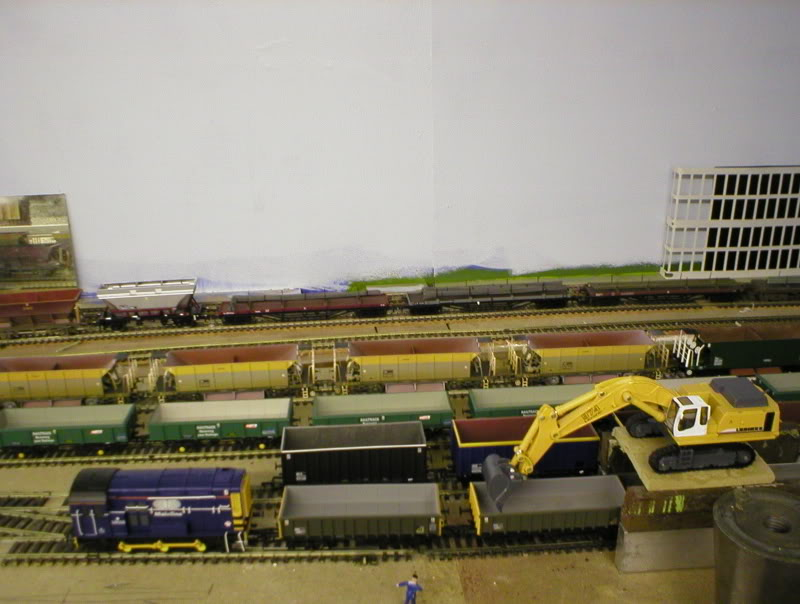 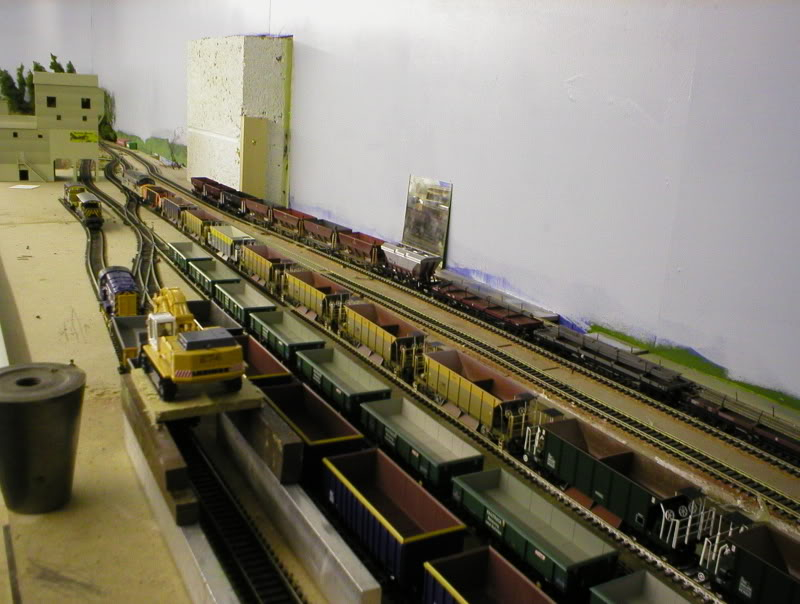 Wow Steve, your layout is really taking shape! Looks like heavy equipment is a major part of your theme

Sure is Ken, the dragline will sit behind on a 12ft section of the layout which has not been done yet,,,trouble is, now i'll require dump trucks, crushers, loading shovels and other stuff. To enable this i'm down to single track right round the garage which is almost all within 5" of the wall, this gives me quite a lot of foreground to make quarry features.
R

Love to have that dragline!!!!
I'll trade you my modern one, still in kit, even for it.

You did "some"??
It is almost halve a layout! ( to me
It's going to be a fantastic part of your layout and if the "concept" ,you thought about, will work you'll have done a great job( actualy you already do/did!! )
great pictures Steve!

Thanks Jos, the scenic stuff can wait till i'm happy it's working 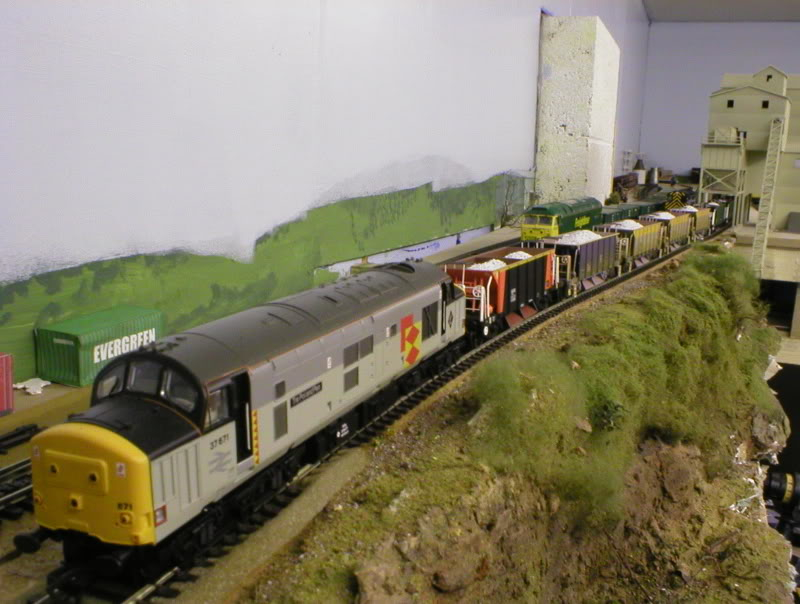 Looking good steve, I like your 57, Im really pleased with my Virgin "scott tracy" 57 by Bachmann its an excellent runner that flywhhel makes a big difference.