"Whether I shall turn out to be the hero of my own life, or whether that station will be held by anybody else, these pages must show."

So, here I am. Finally...
My journey in model railroading is a continuous one, and after building a layout in HOn3 the last couple of years, I've now jumped headfirst into the dark side of model railroading; On30!

As some may know, I live in Sweden and work as an artist/cultural heritage consultant.
My former freelanced layout: the Minturn-Kings divide & Eastern was a Colorado based empire built in HOn3.

, my fat fingers aren't getting any nimbler....
A good friend of mine decided to dismantle his On30 layout and sell me a bunch of the stuff.
How could I say no?
So, with a MMI K-27, a Goose and a bunch of other On30 stuff, I'm going to rebuild my layout into a On30 layout.
The new layout will be based on the south western part of the narrow gauge circle, and be named the San Miguel Central RR. 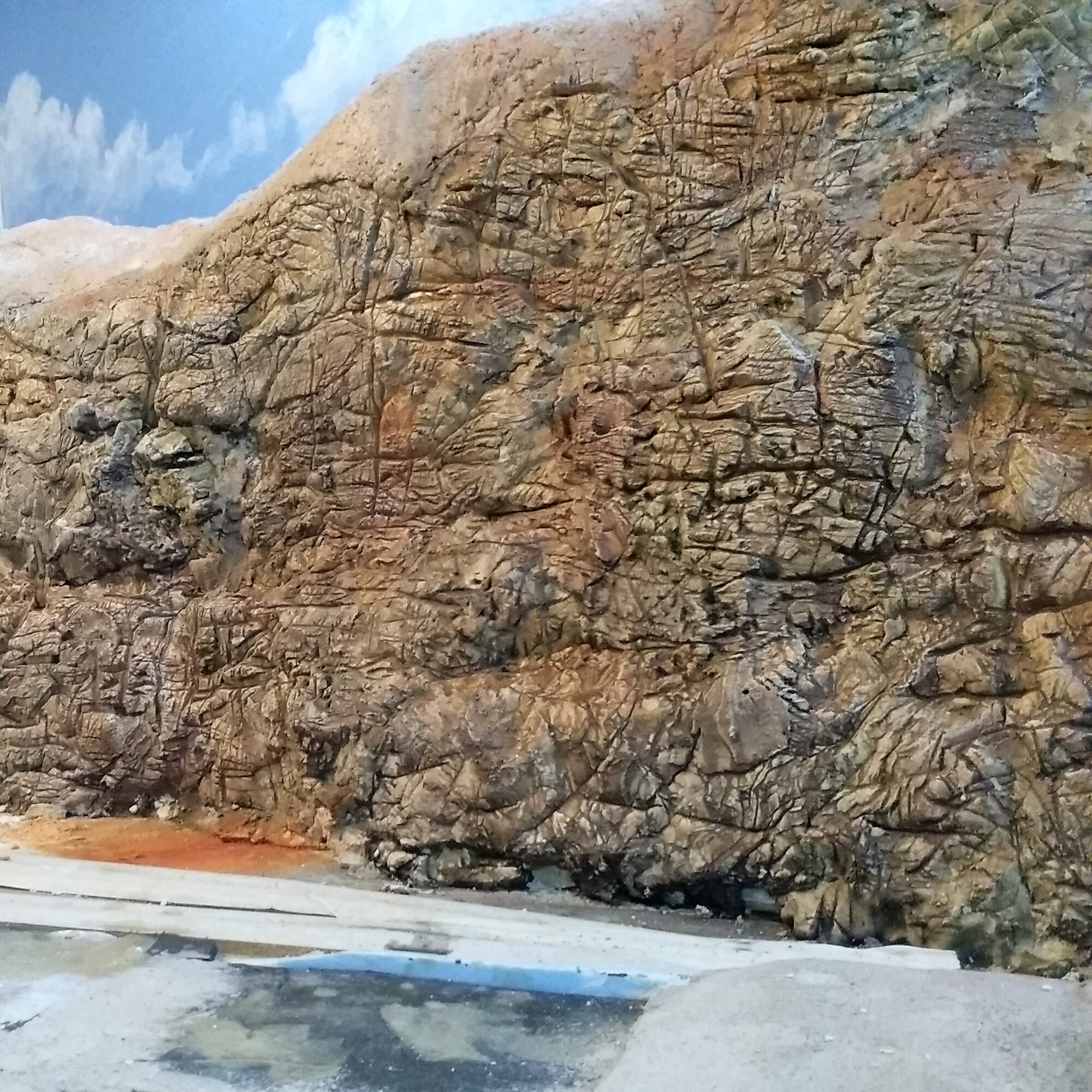 So, if anyone has any good pointers on how to be successful in this new (to me) scale, please chime in!

Hey, great to see you back!
I started into On30 (and other scales) but realized I’d better pump the brakes and focus on one thing for now.
I still might do a wee On30 shelf thingy as I have a few items left.
I’ll be tagging along for the ride! 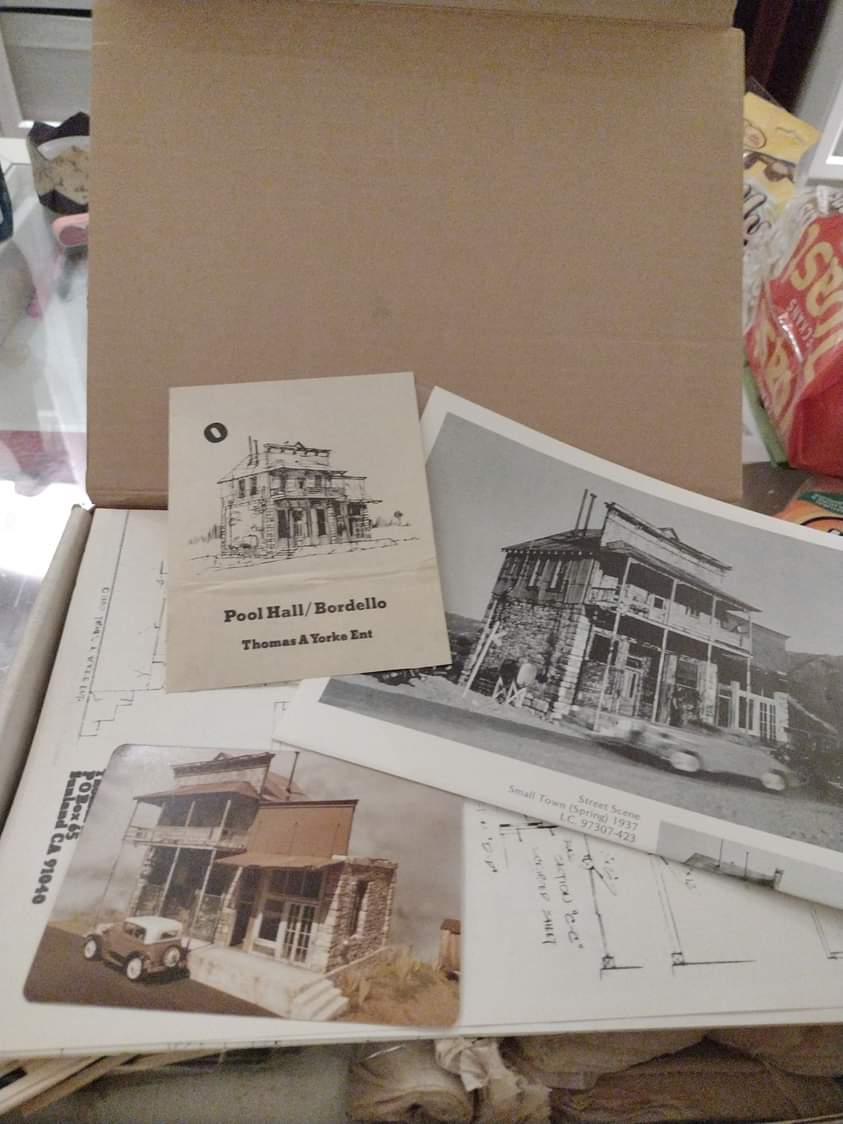 So this is the first O scale build getting started.
Yorke's Pool hall & Bordello in 1:48.
I have built it in H0 before so I have some knowledge of how to build it.

It will be fun to test my skills on a kit in O scale! 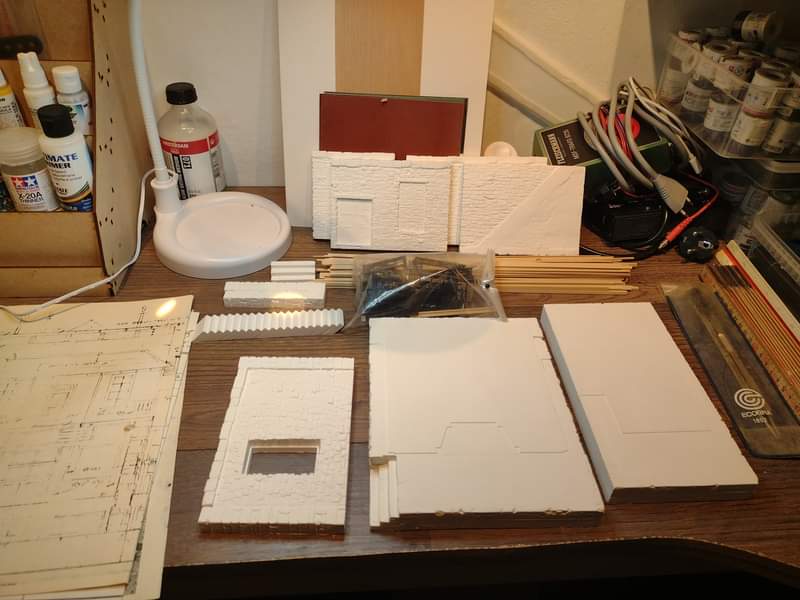 I CAD designed an interior for the saloon. 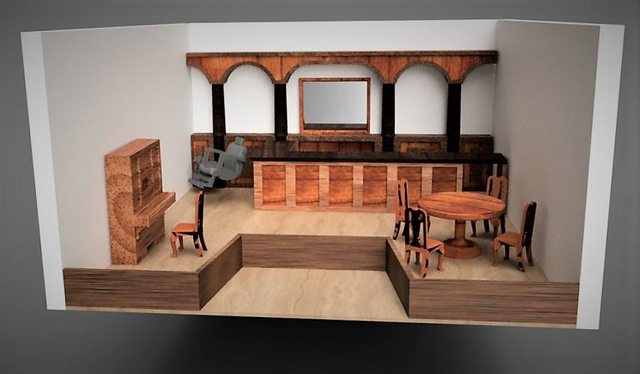 I designed the interior in Fusion 360 and sliced it in Chitubox for preparing it to print on my trusty old Anycubic Photon S resin printer.
This is how the file look for the wall: 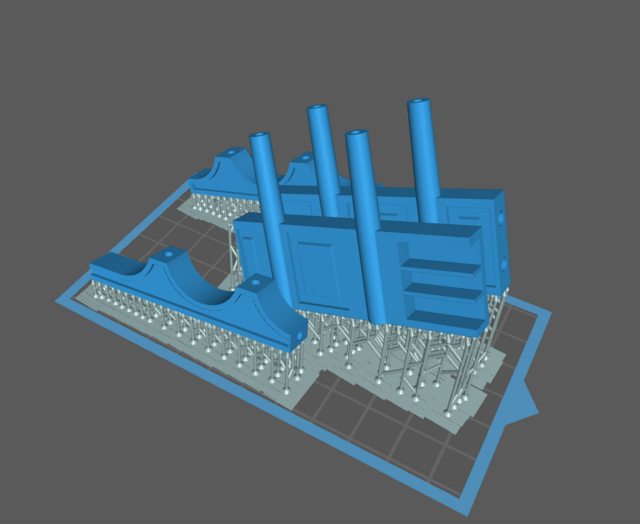 And this is fresh from the printer: 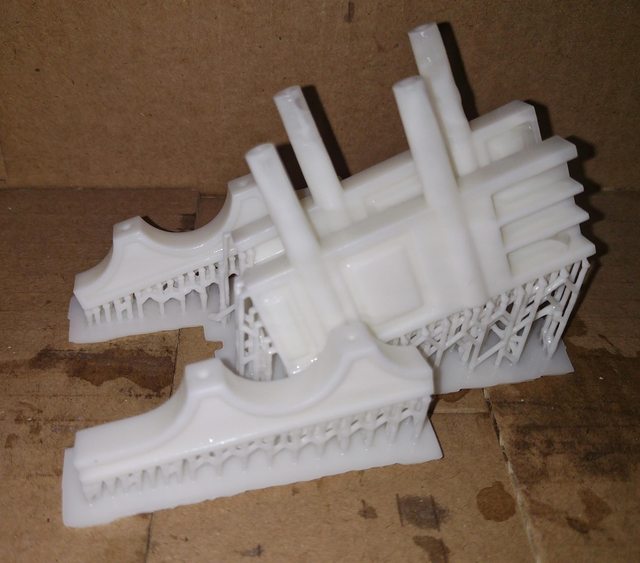 I use a water soluble resin as it is much less toxic.
After trimming the supports and hardening it in the UV chamber, I glued it together with CA: 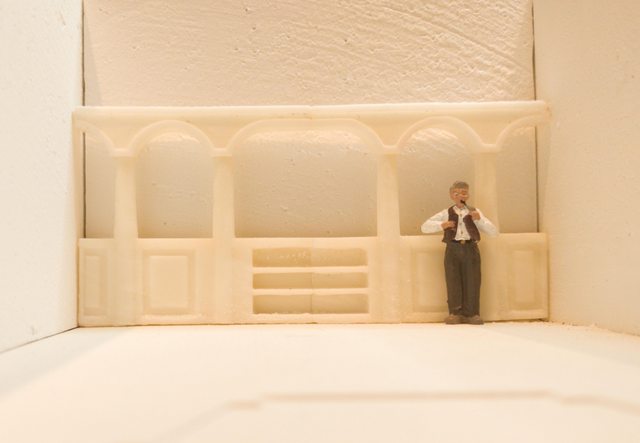 Theres a bit more sanding and a bit of filler needed at the joint, but I think it will look smashing!

I primed the back wall with Tamiya dark brown. 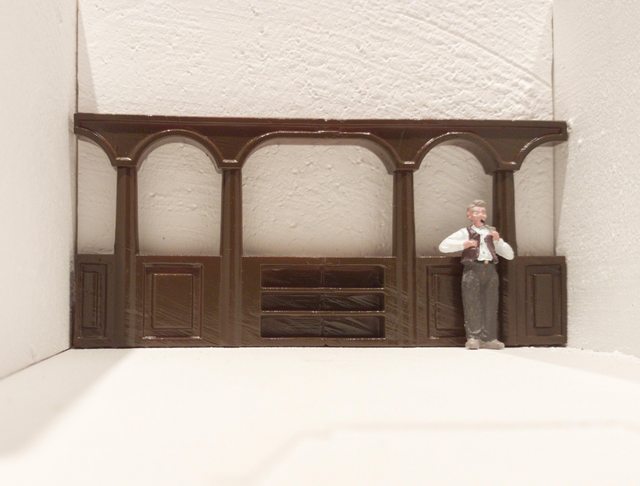 Then I added some drybrushing and painted the pillars black.. 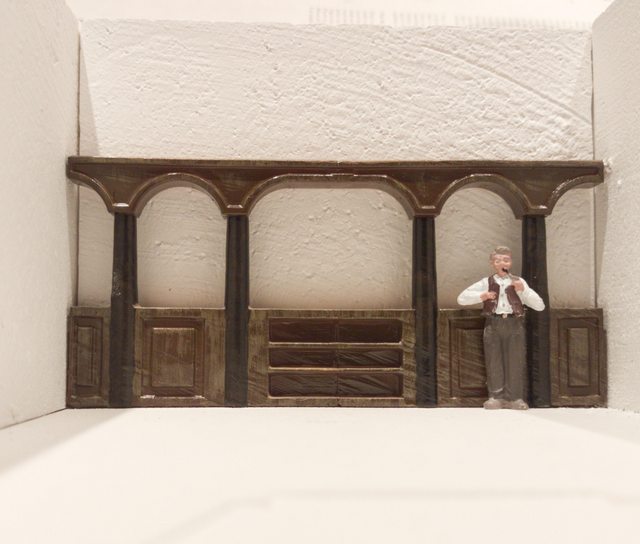 The walls are maybe going to get wallpaper, I haven't decided yet....

That's the last of the interior pieces printed and painted for the Saloon, except for the chandelier...
I think it'll be nice when finished. 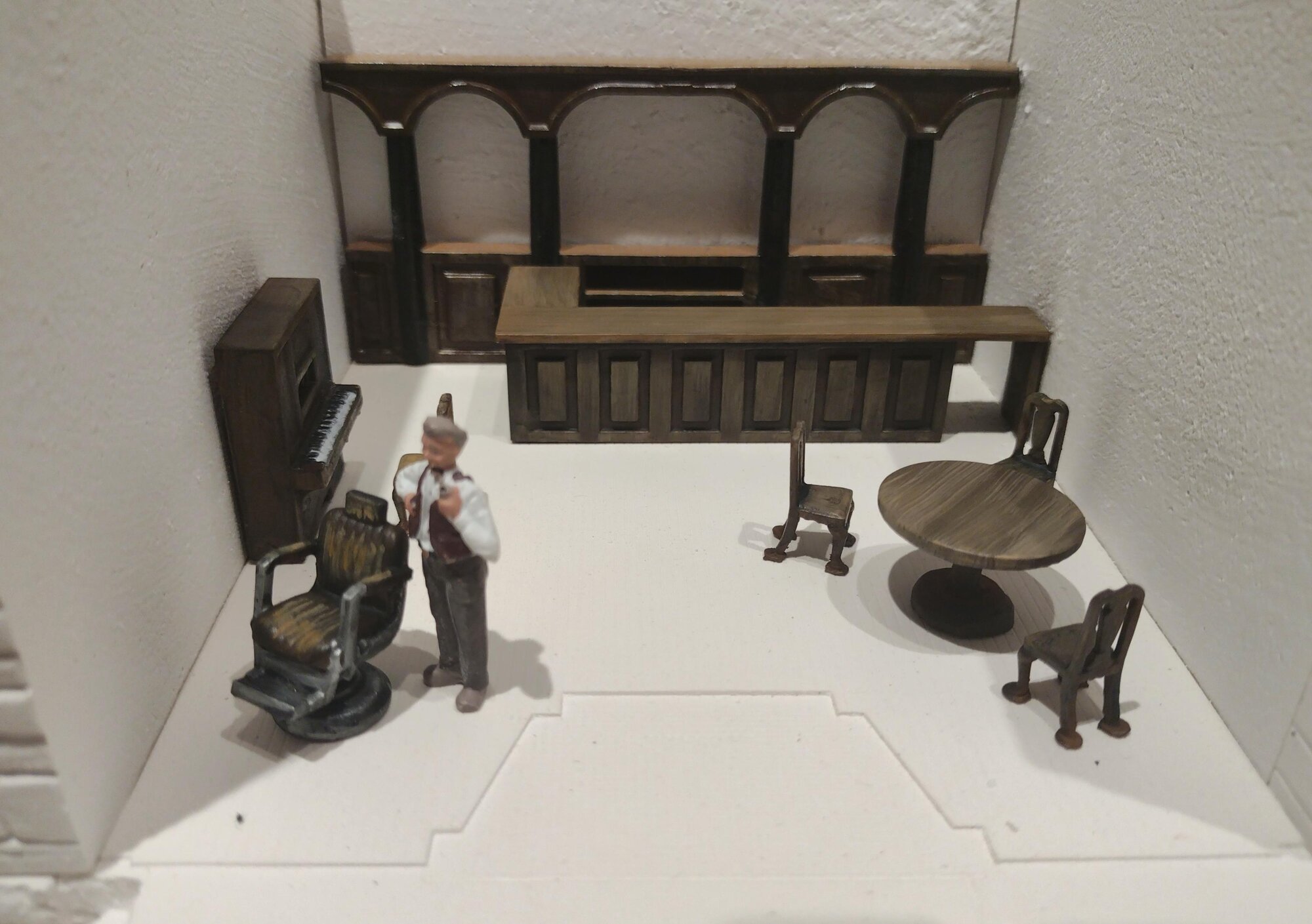 I primed the floor with Vallejo IDF sand: 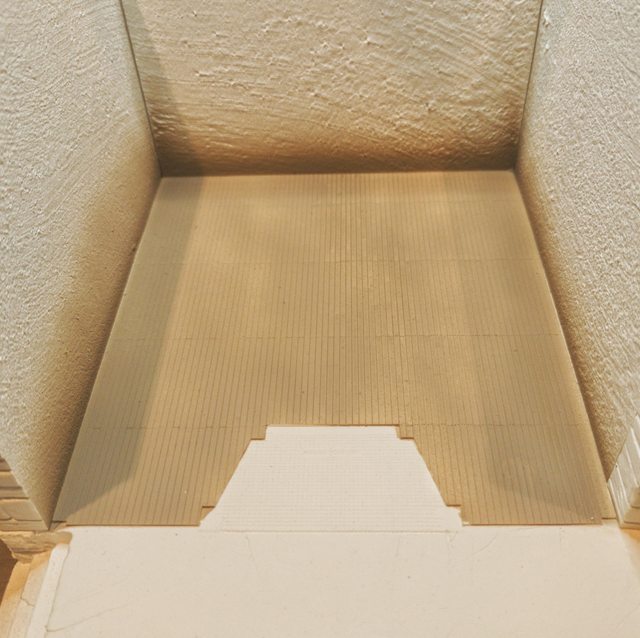 I had some wallpaper printed out and glued it to the walls, it wrinkled nicely vertically, which made it more life like: 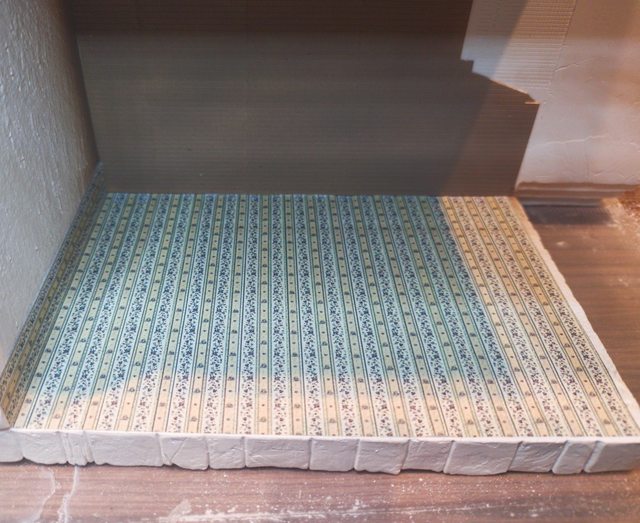 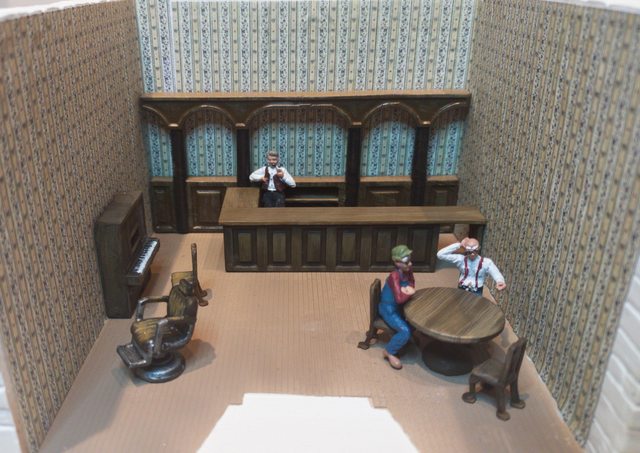 I weathered the floor a bit and glued the interior in place. 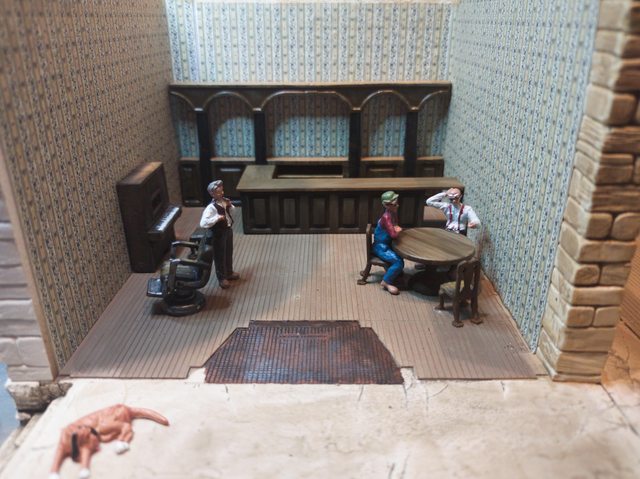 Now for the rest of the detailing.
I haven't decided which type of light fixtures to use yet.

Good looking layout and nice video!
Which loco was the 0n30?

Damn, I need your guy’s eye for detail, seen a lot of slick looking models on here!!!

Topherisme said:
Damn, I need your guy’s eye for detail, seen a lot of slick looking models on here!!!
Click to expand...

I resemble that remark.

The plug between the locomotive and tender was broken (the wires were broken off...).

So after some repair work I tested it:

I've started to paint the outside walls on the Saloon.
I use a variety of Vallejo and MIG paints. 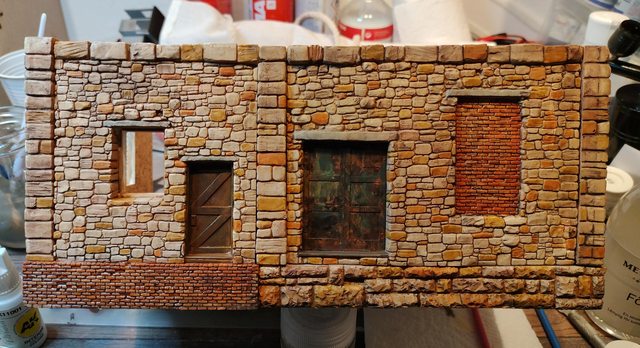 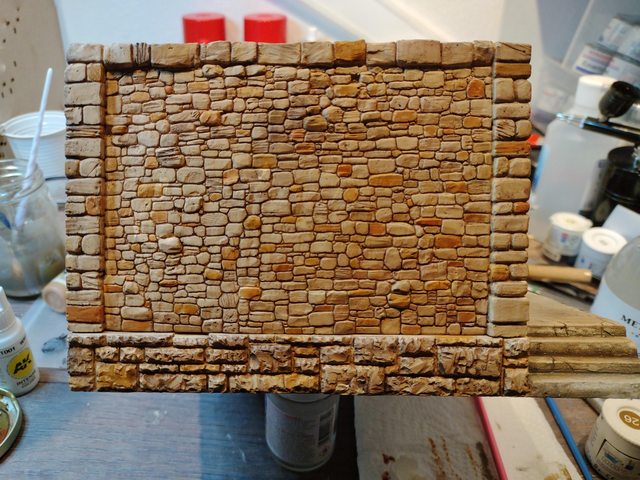 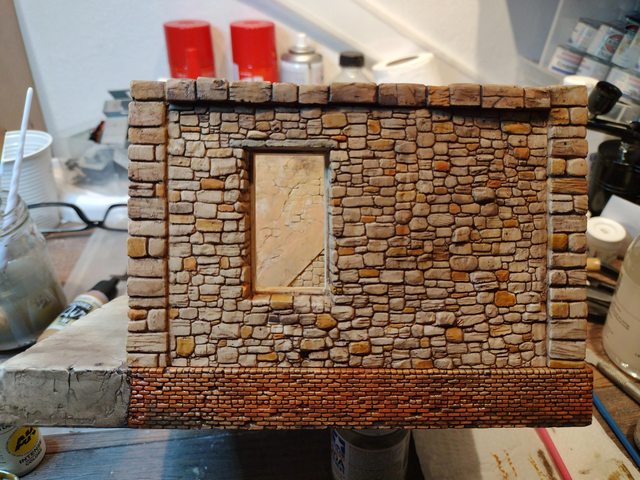 I have just added the enamel panel line wash on the bricks.

This is how it looks now after all the filters and dry brushing is finished.
I used a lot of pictures of masonry buildings in Colorado as an inspiration. 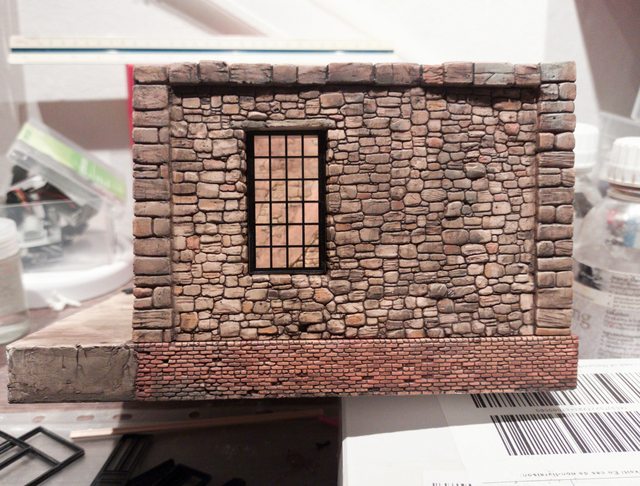 I'm quite satisfied with the result.

I started on the plethora of windows and doors for the project.
These older Grandt line castings are good!
Not a flash to be seen anywhere.
I primed them with Badger Stynylrez primer before painting them an old wood color.
Then I used hairspray as a chipping layer before painting them offwhite.
The chipping was done rather lightly with a small brush.
A dark grey pin wash from MIG was then applied. 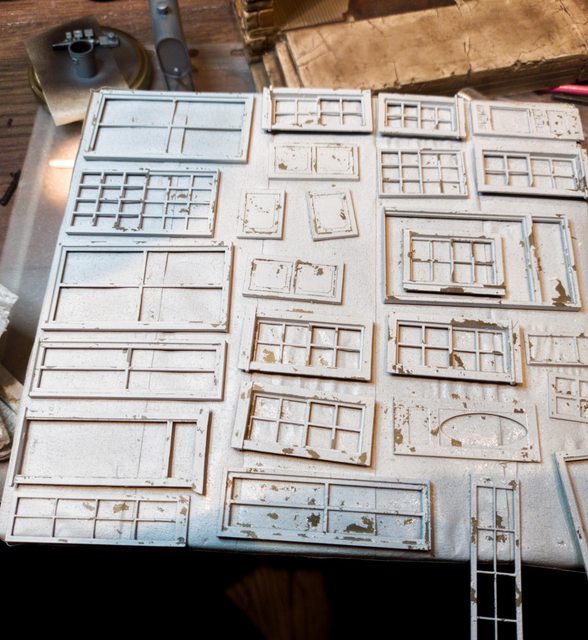 The glass I use is microscope slide covers. They are really good to use when you have an interior to show, as there's no distortion.
They are quite delicate though, so I divide them in separate panes to avoid big sheets that may break easier. 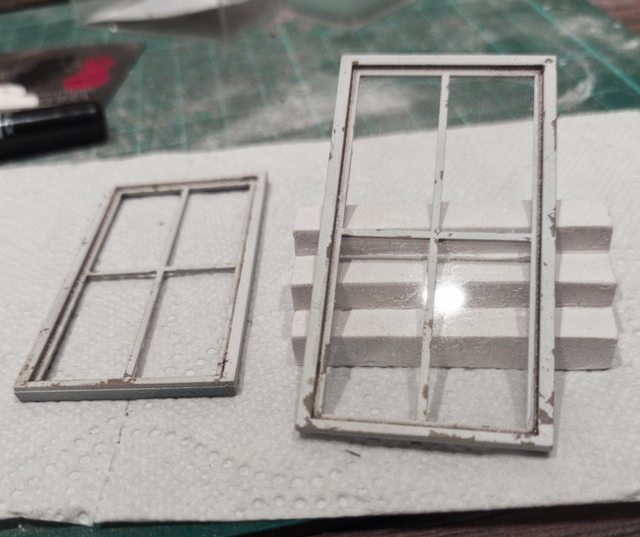 Staff member
That's some beautiful work - Happy to see you back on here!