Happy to be here !

Update again today. Glued down the platforms for the main station on the side of the layout opposite the entrance door. Also worked on ballasting more track. Continued work on the background scenery and did some excavating in one corner where we decided to install the young fellow’s motorized windmill. See photos and notes below.

Glued down the main station platforms and removed the roof support columns to make it easier to ballast the tracks and work on the scenery behind the platforms. Started adding ballast between platforms but it hasn’t been glued yet. This is the last section of tracks that needs ballasting. There was discussion of adding an additional track along the edge of the layout in front of the station platform to run a trolley. The club still has the reversing circuitry that we used to run a trolley track on our earlier layout which we could use here to control the trolley stopping at each end of this track. 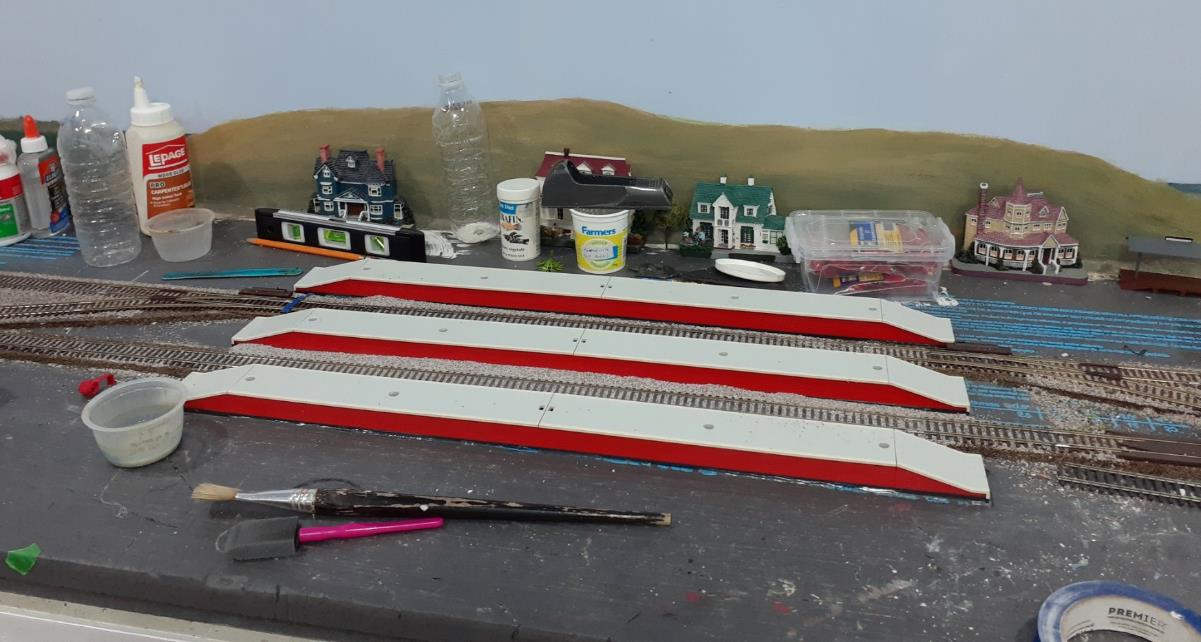 Ccompleted the laying and gluing of ballast of all the tracks on the right side of this photo. We also dug out the young fellow’s lighthouse with working light and decided this is probably the best location for it. 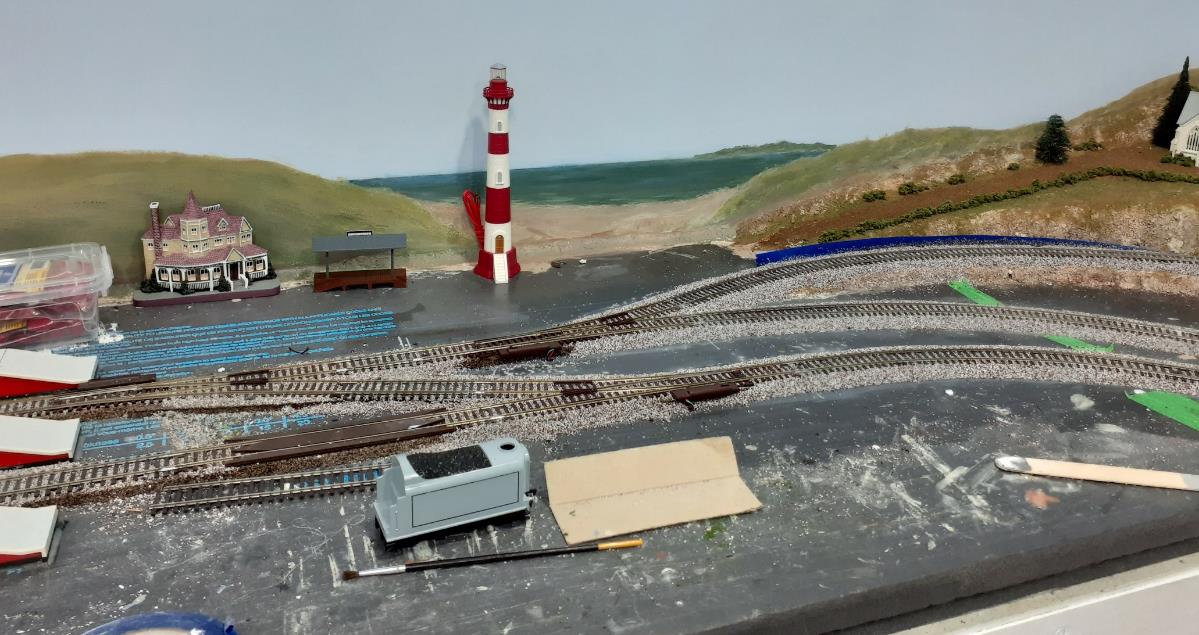 We also unpacked his working windmill and decided the corner behind the farm was the best place for it. Did some excavating of the hill and covered the area with fiberglass mesh tape and plaster. 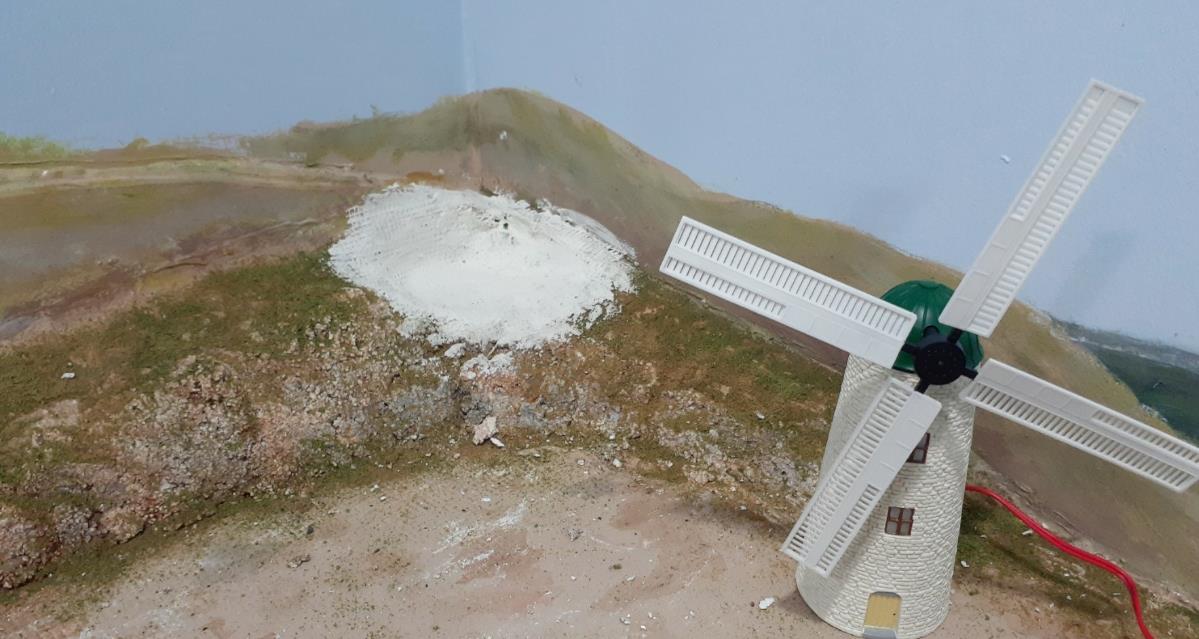 Painted the plaster with brown latex paint and then added some Mold-a-Scene rock faces. Next session, drill the hole for the power wire going down to the underside of the module and redo the scenery around the windmill.

Also added trees and shrubs on the hill in the corner to the right of the entrance doorway. 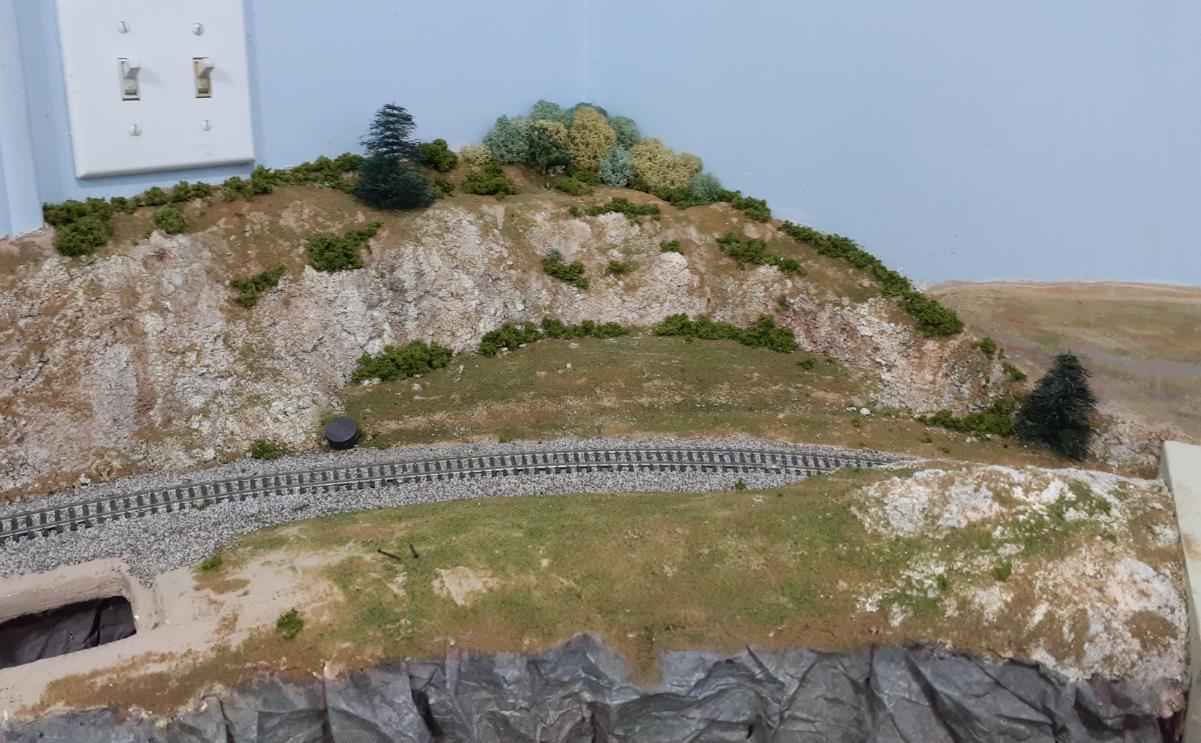 and finally some panoramic views

This morning the two primary expert modellers of this layout worked on adding ground cover to the remaining areas on the side of the layout with the main station. We finally have at least basic ground cover on the entire layout. Still more scenery and details to add including trees and bushes. One of them also looked in the club’s two binders of information on our older layouts and found a diagram of the wiring for the trolley control module. On Thursday he will likely look at wiring the trolley tracks. Next they will likely add the 8” tall Masonite facia around the inner edge of all the modules and connect all the wiring for the other trackwork. See photos and notes below.

Area to the left of the main station. I added the darker gravel area around the small building at the end of the harbour and the ground cover behind and in front of the roadway with trolley track. 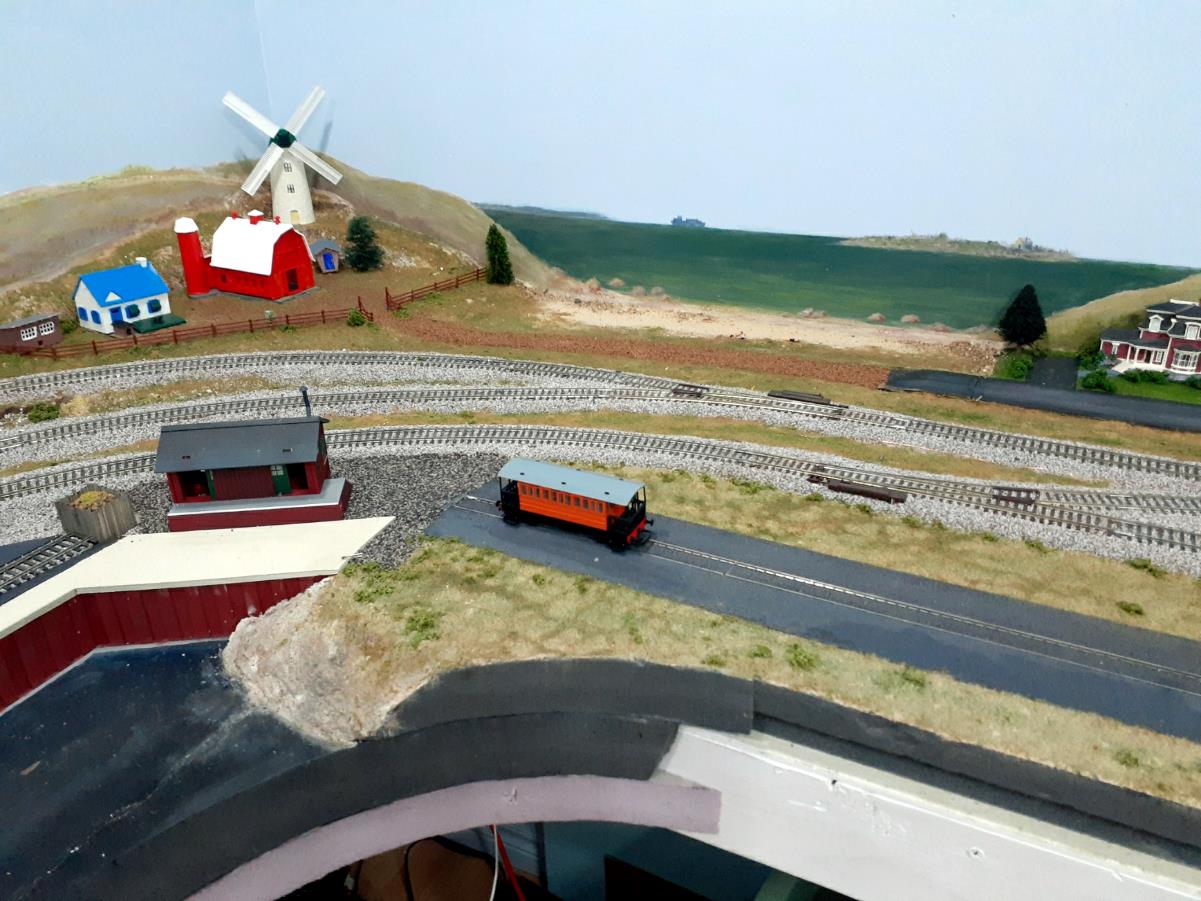 A bit more gravel around the station to level out some bumps and dips and also the ground cover on either side of the front roadway. 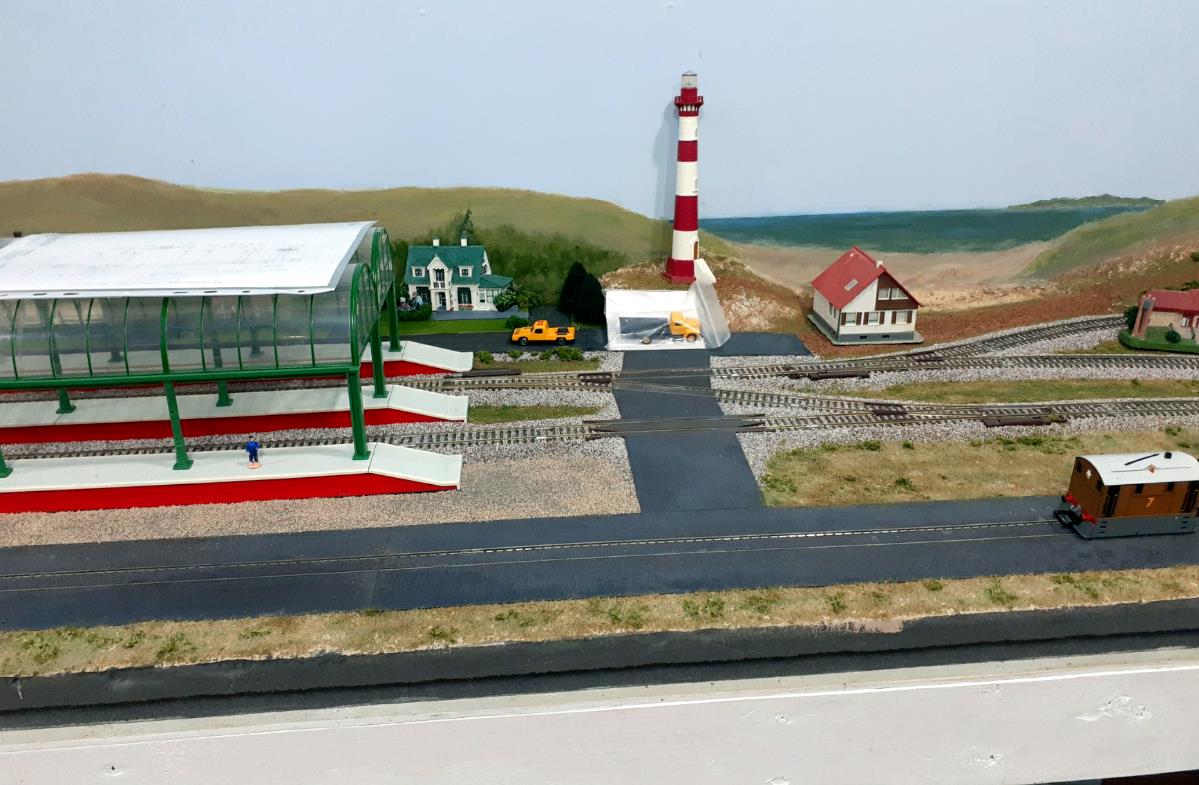 Ground cover around the right end of trolley line. This will darken to match the ground cover on the right of photo once the scenic cement dries. 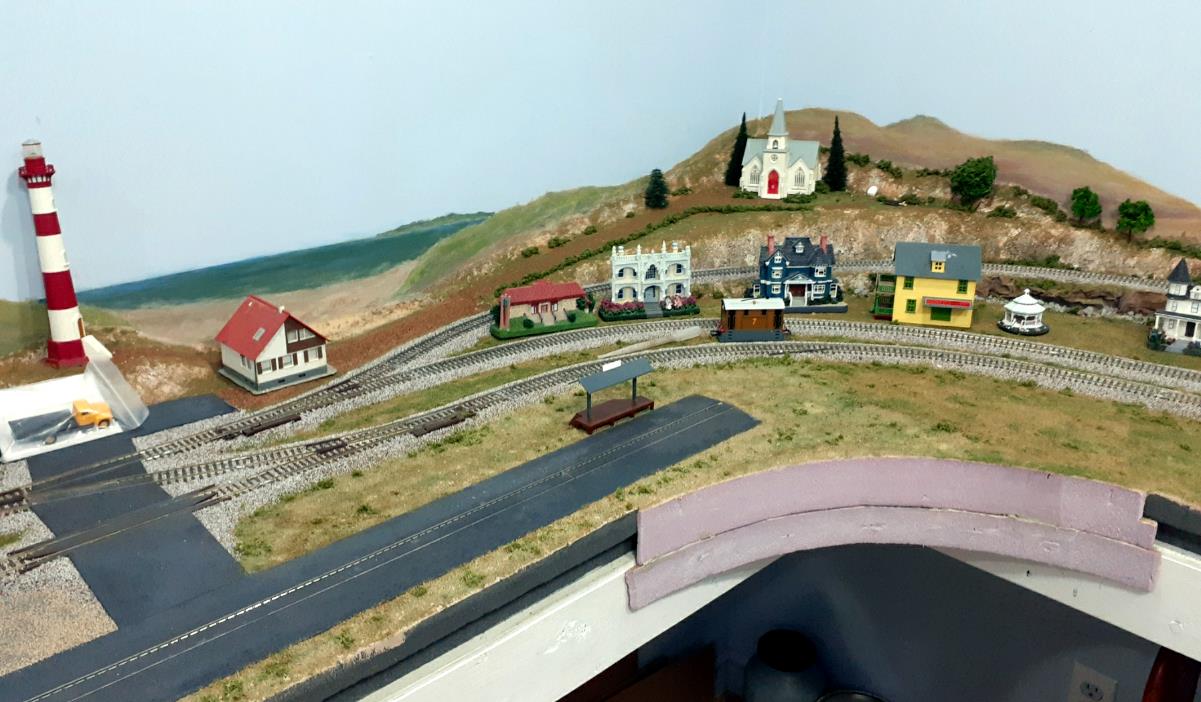 Area that they added ground cover last week now that the scenic cement has dried. 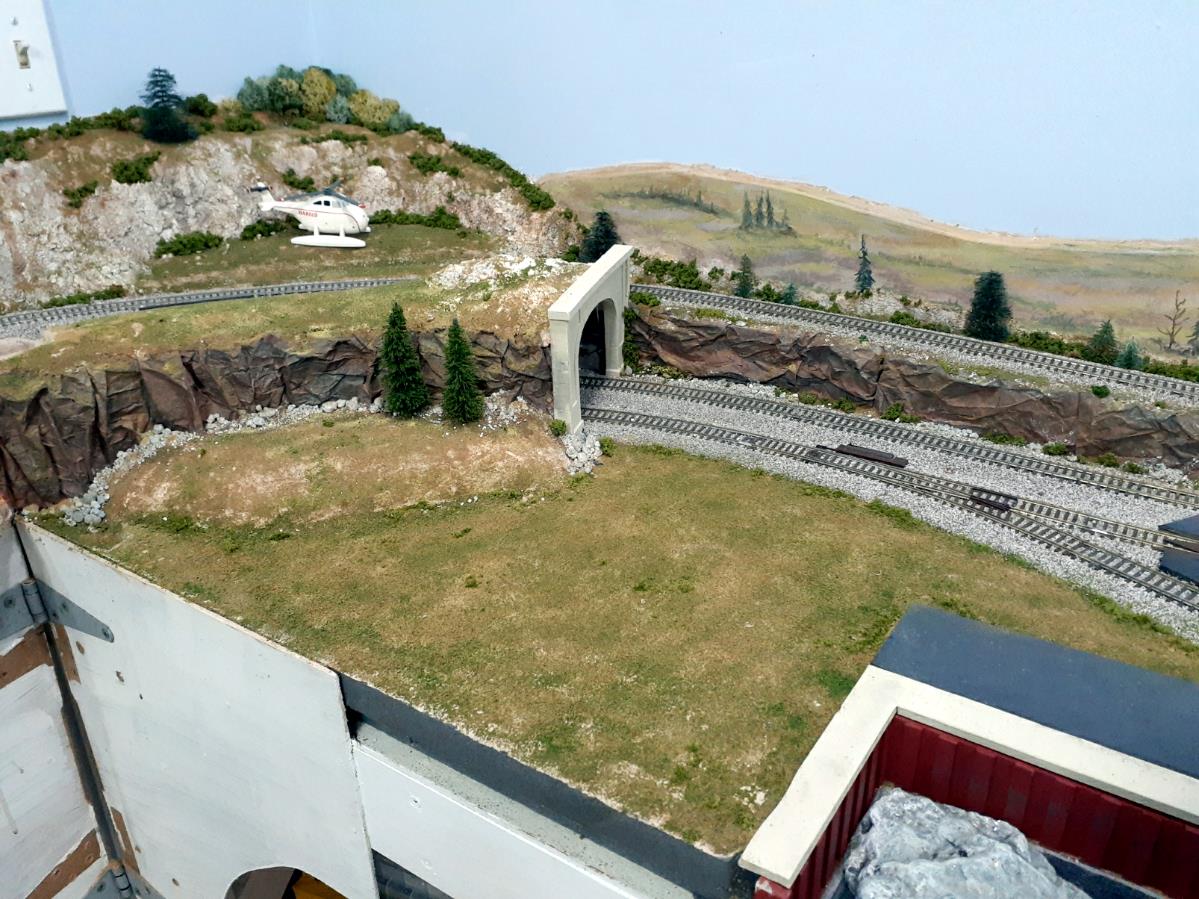 Throw in the work that they did with the Truro Model Railway show and these guys are incredible !
Last edited: Nov 18, 2021

Thanks Everyone! I played a micro micro role due to Covid and space, but it illustrates the great work done by many clubs and groups. I always like to acknowledge the huge effort made by volunteers everywhere !

Landscaping continuing and working around the harbour. 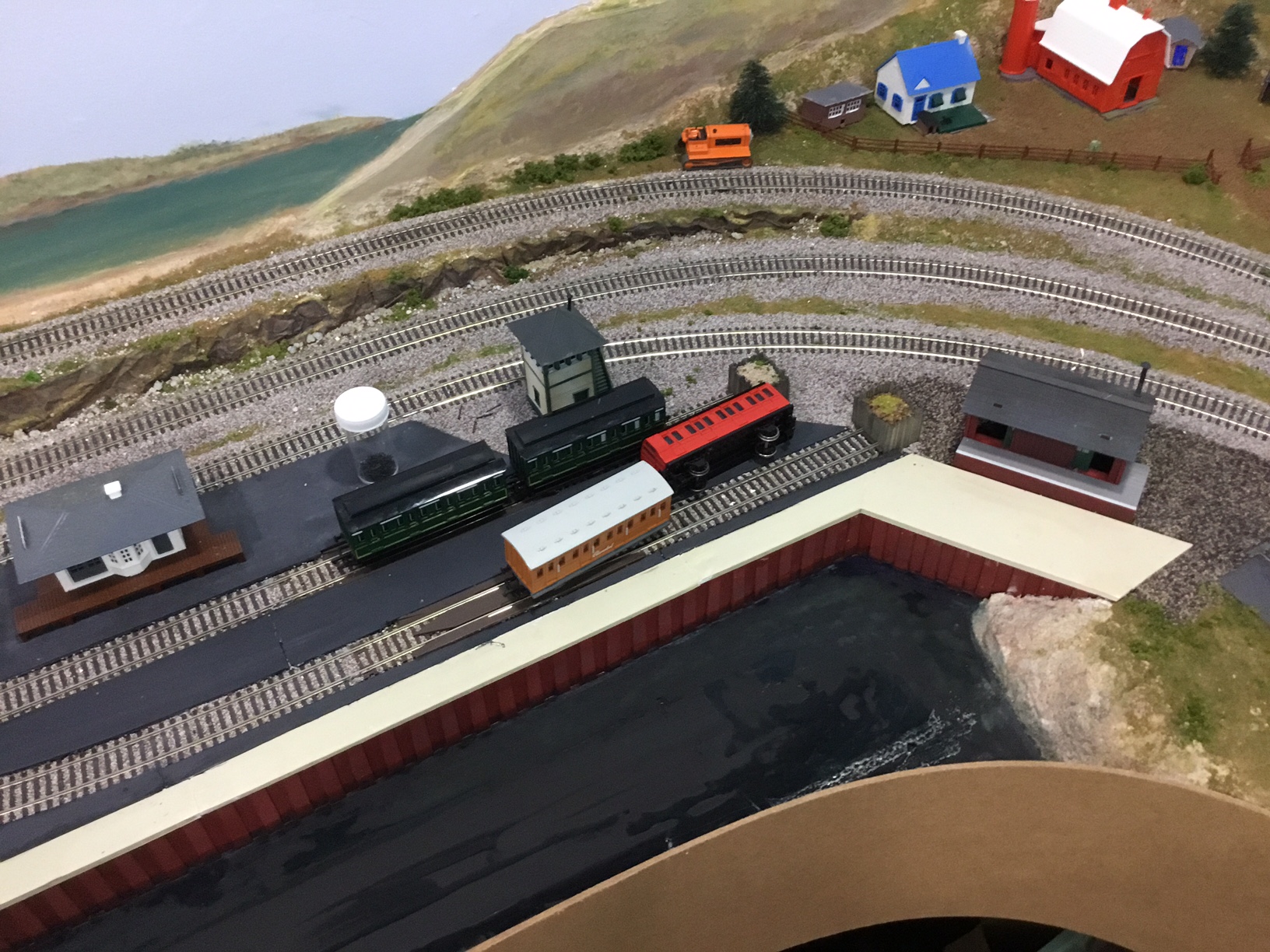 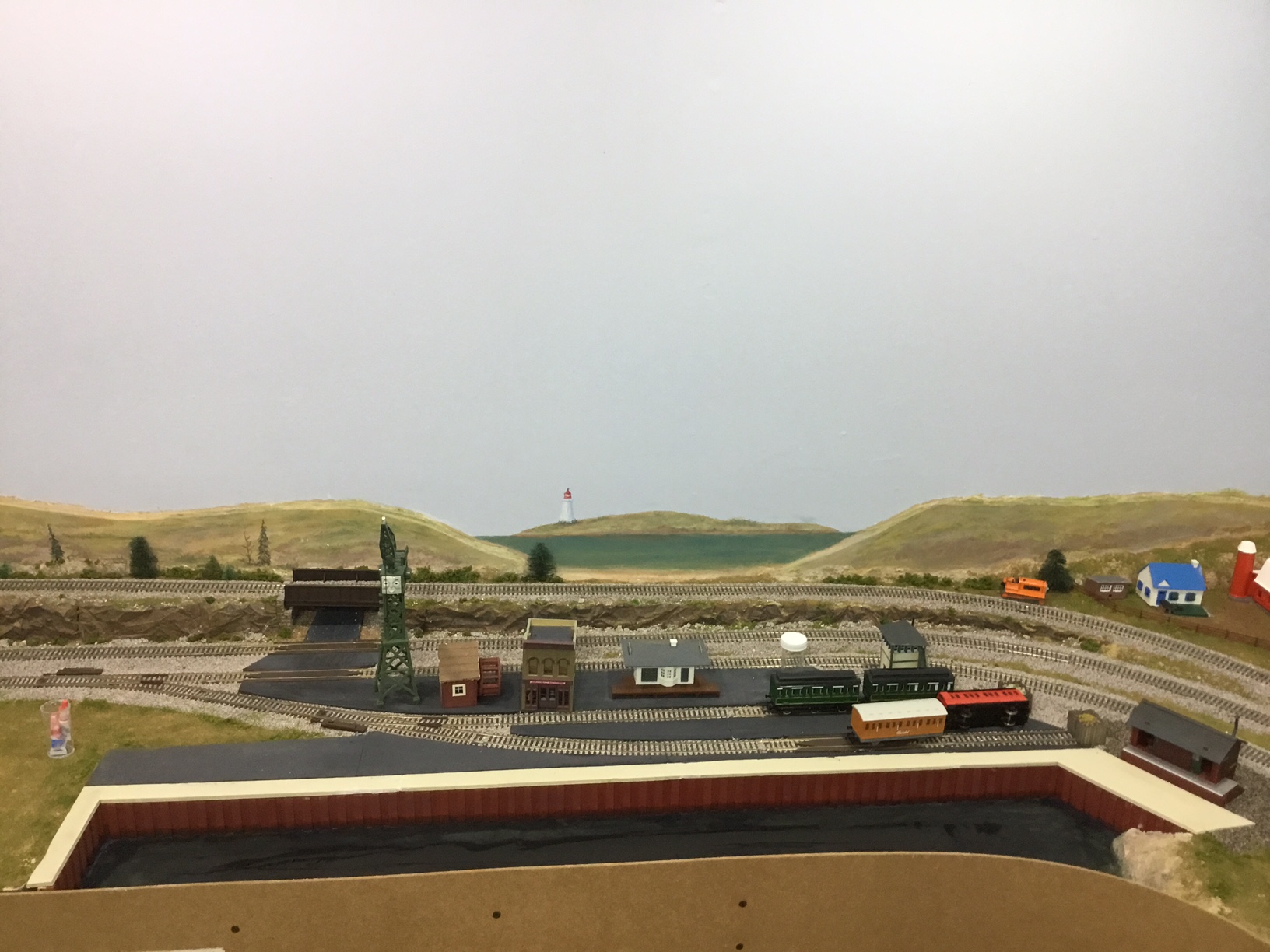 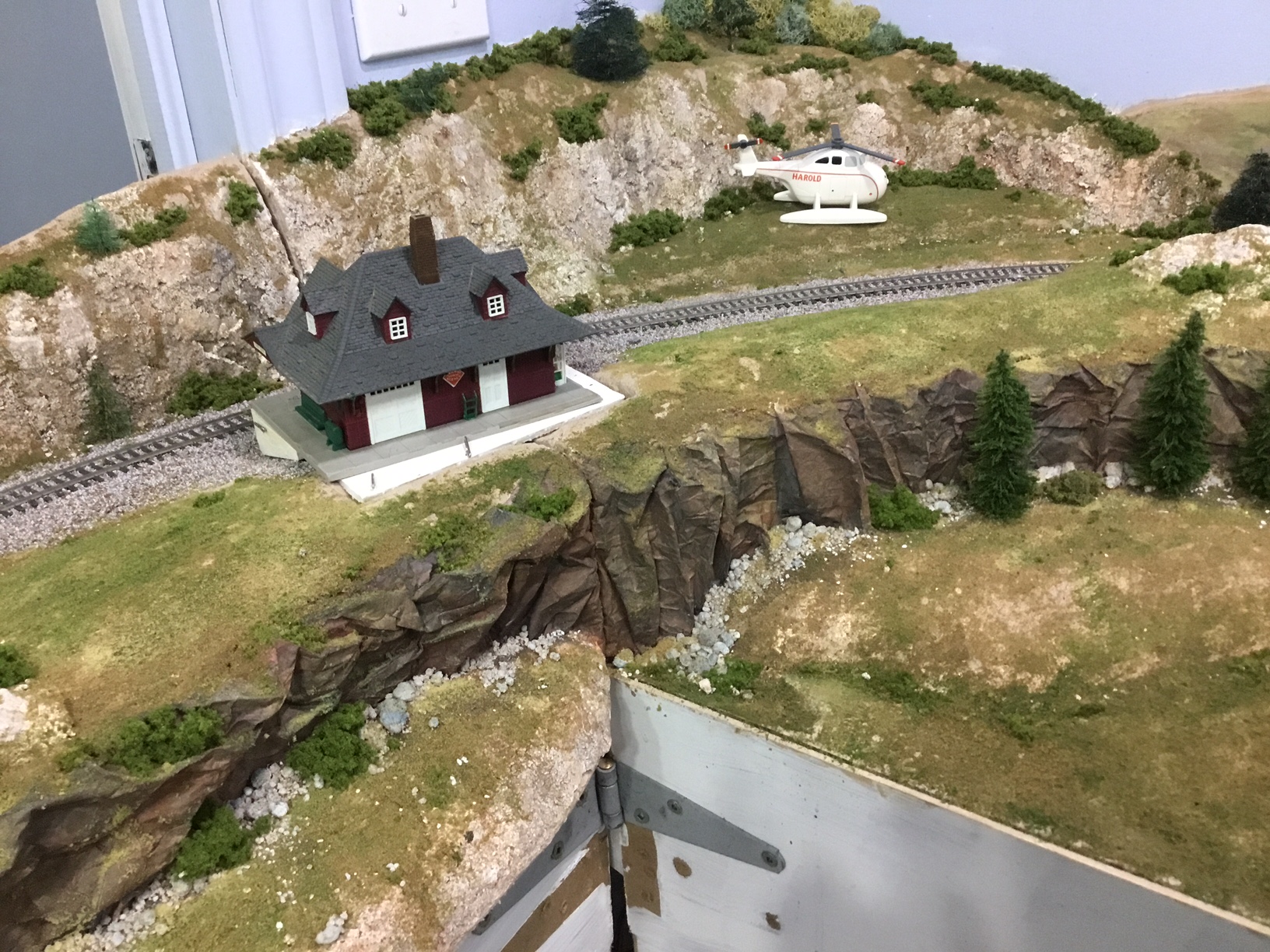 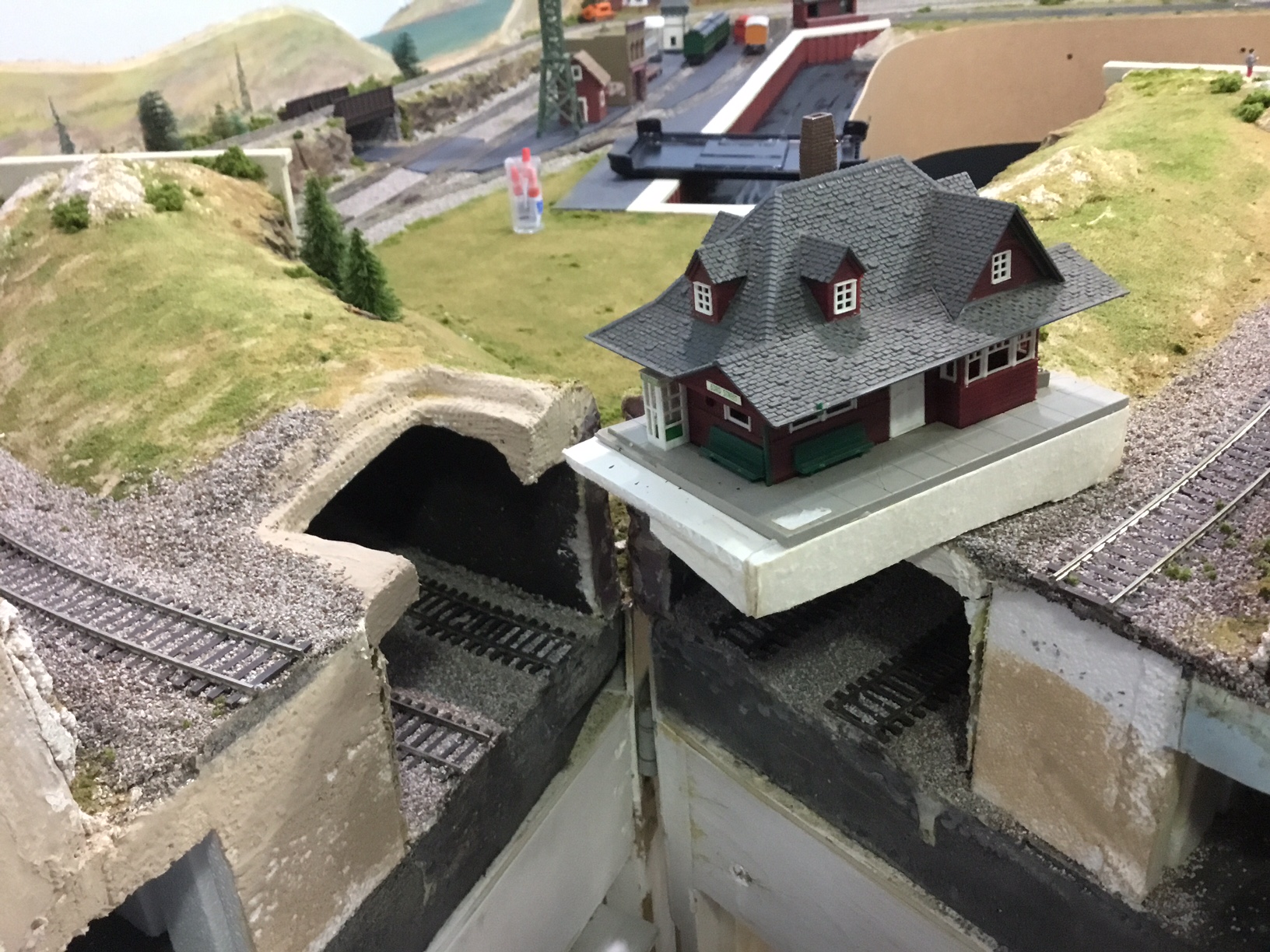 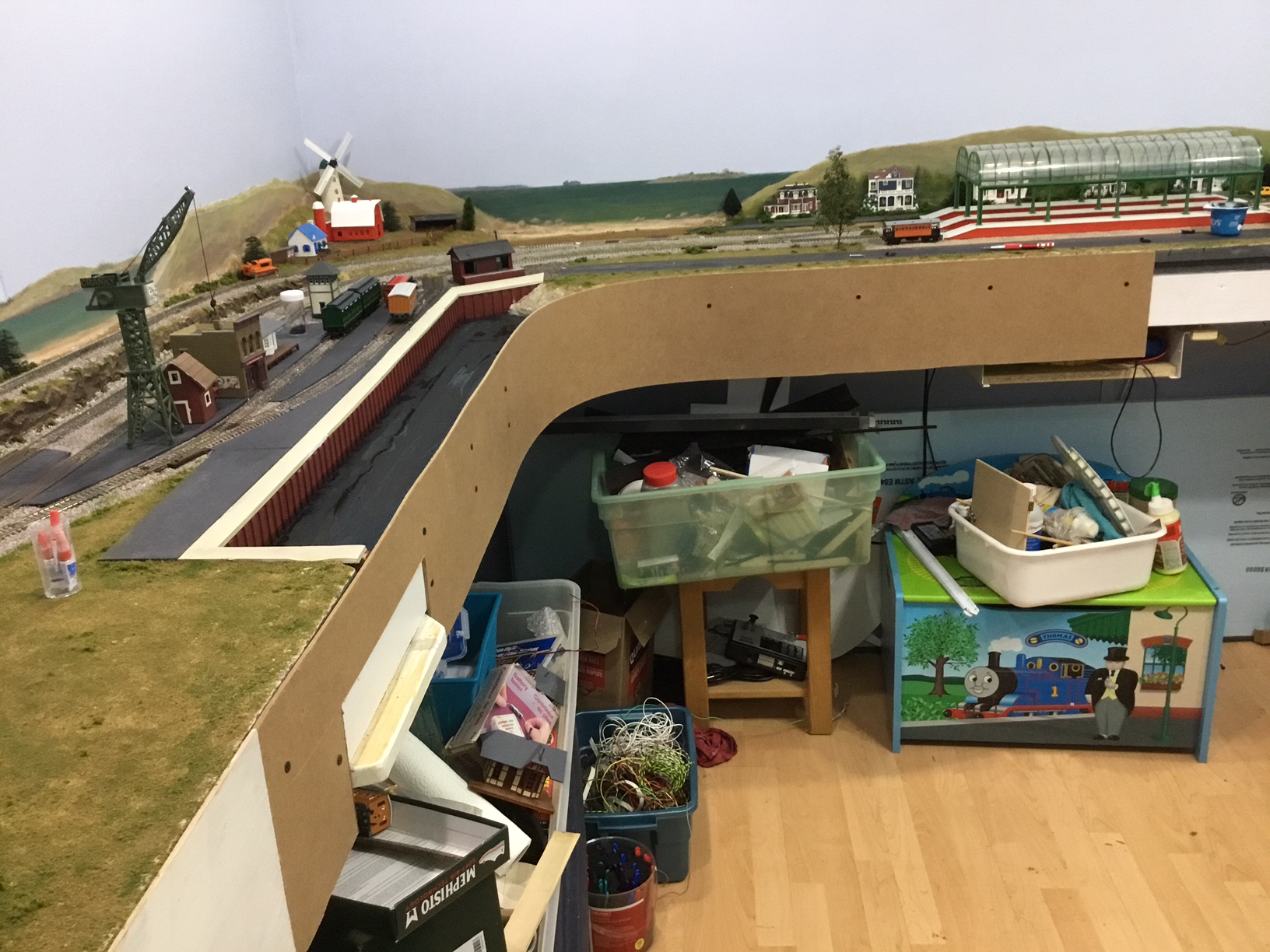 Is it really to scale ? 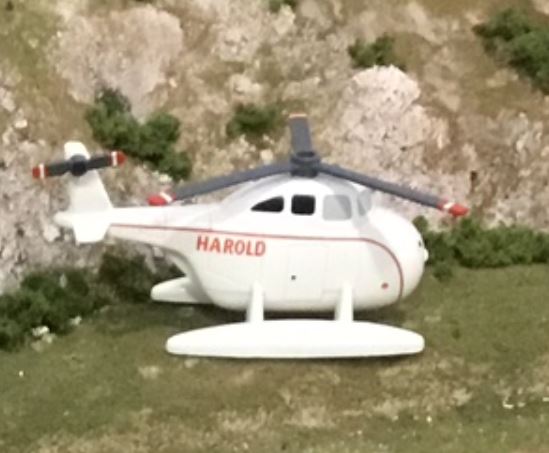 Work continued on the charity layout this morning. Members of the club installed the remaining two short sections of Masonite facia board by the roundhouse and then gave it a first coat of green paint. They also did a little more gluing of the ballast and tracks at the joint in the tunnel at the hinged end of the swingout section. Work was done on the wiring for the turnout switch machines. See photos below of the painted facia.

Next week we are thinking of going Tuesday, Wednesday and Thursday mornings and would like to have trains running by the time we finish on Thursday. We should get the second coat of paint of the facia.

Facia boards installed by round house and first coat of paint. After a second coat of paint, we will touch up the scenery along the top edge of the facia. The facia by the bridge and stream is still just temporarily installed. This will be removed when we are ready to open the swing out section and cut into two pieces with one on the swingout section.

Painted facia board by the harbour. 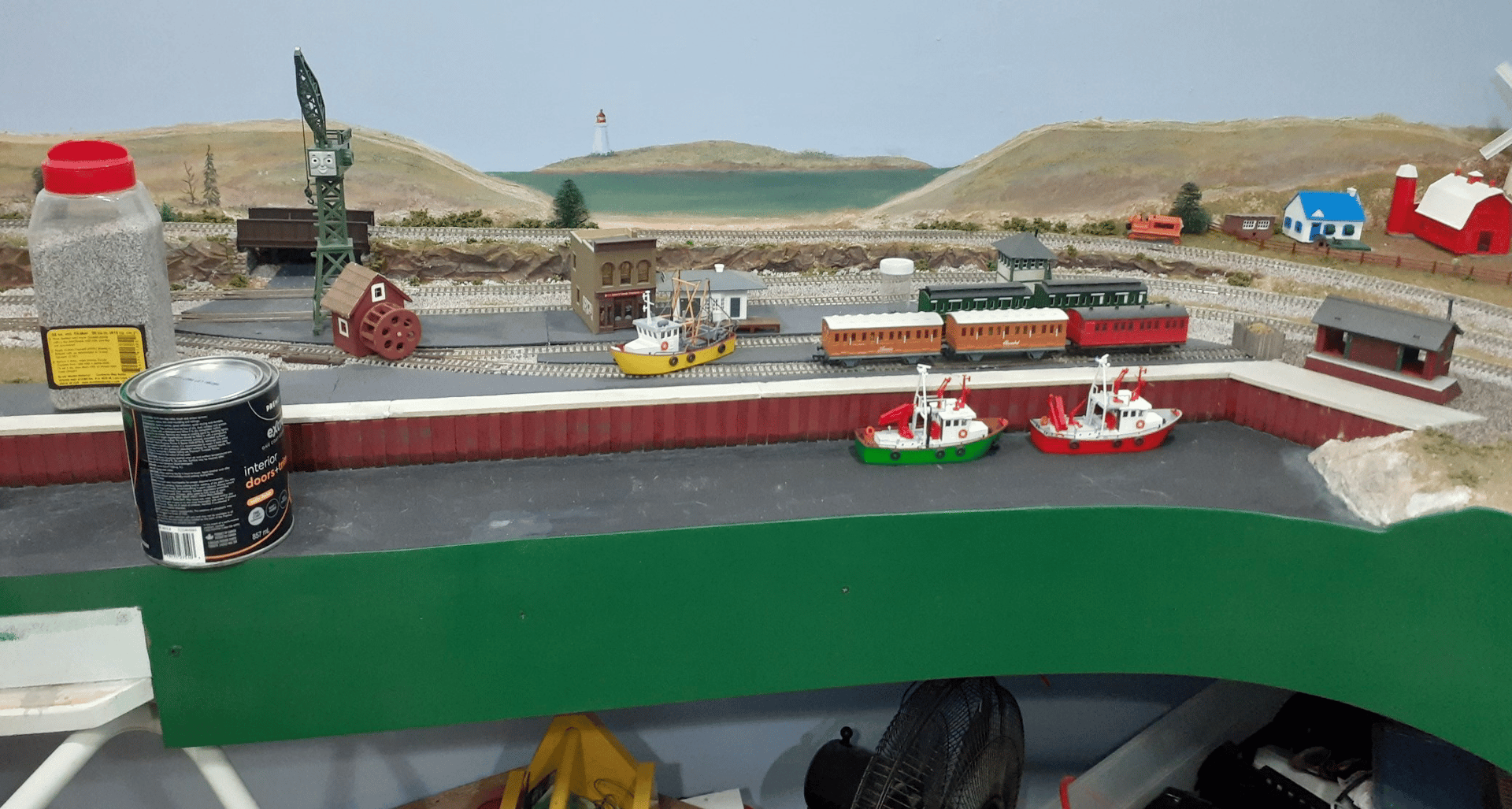 Yesterday they continued soldering extension wires to the dropdown wires on the switch motors that were then connected to the control switches. They still have three of the nine turnouts left which need wires attached. Yesterday Fergus and the young recipient cleaned the tracks and then Fergus started testing with one of his engines and then started pulling his track cleaning care around the tracks. After fixing a few minor issues he then ran one of the young fellow’s engines successfully. See photos and notes below. Fergus also posted a short video on Facebook of the trains running, see
https://www.facebook.com/video.php?v=980162322584477

They plan to go back in the new year for a few sessions to finish a few things including completing the harbour scene, touching up the scenery along the top edge of the facia board, finish the wiring of all turnout motors. Some of the turnout motors also require a little cleaning of ballast etc. to get them to actuate properly. Also likely the family will find a few track issues over Christmas that we will deal with in the new year.

Hope everyone has a good Christmas holiday and Happy New Year.

They were still having a few issues with track alignment in the tunnel with the swingout section. Over the last few sessions Fergus created the floating section of track in the tunnel where the tracks butt up to the two tracks on the swingout section. This allows for some adjustment of the track alignment is case changes of room temperature and humidity cause misalignments. 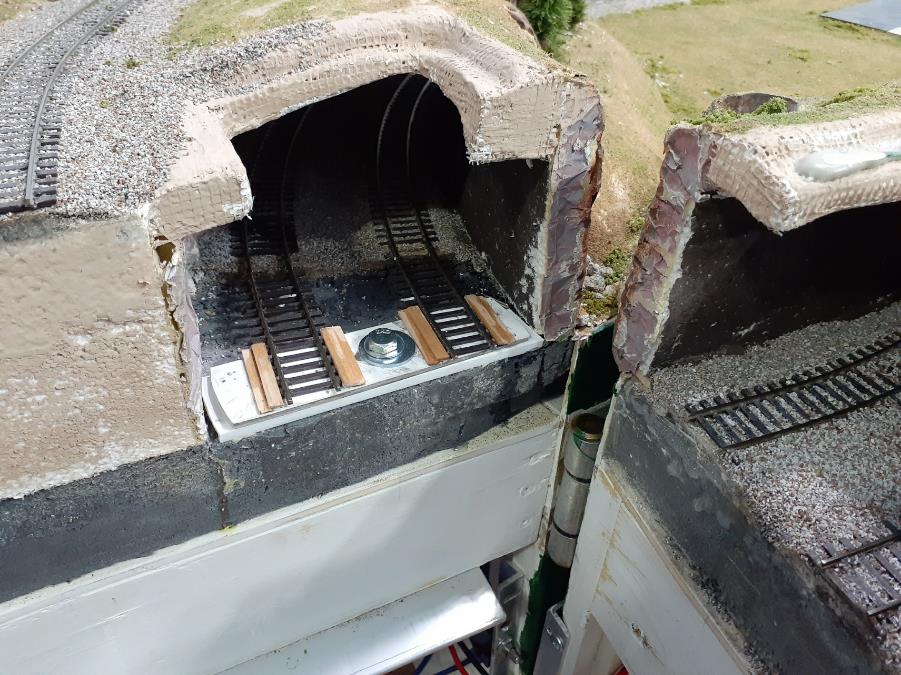 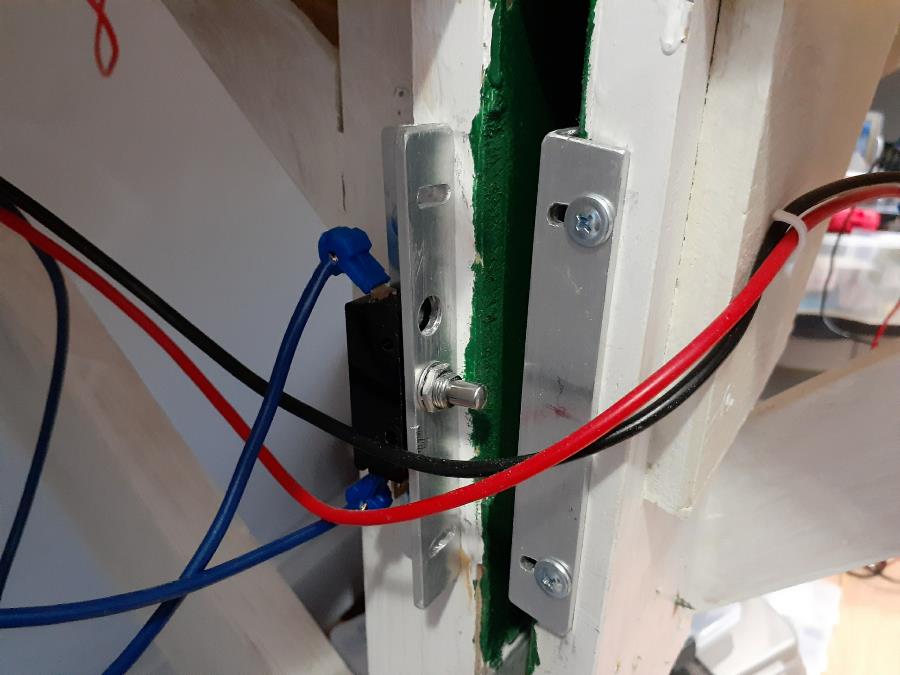 Pullout drawer with the Digitrax controller with wires attached for track power and for the programming track by the turntable. Fergus had his hand held controller attached to this for his testing. 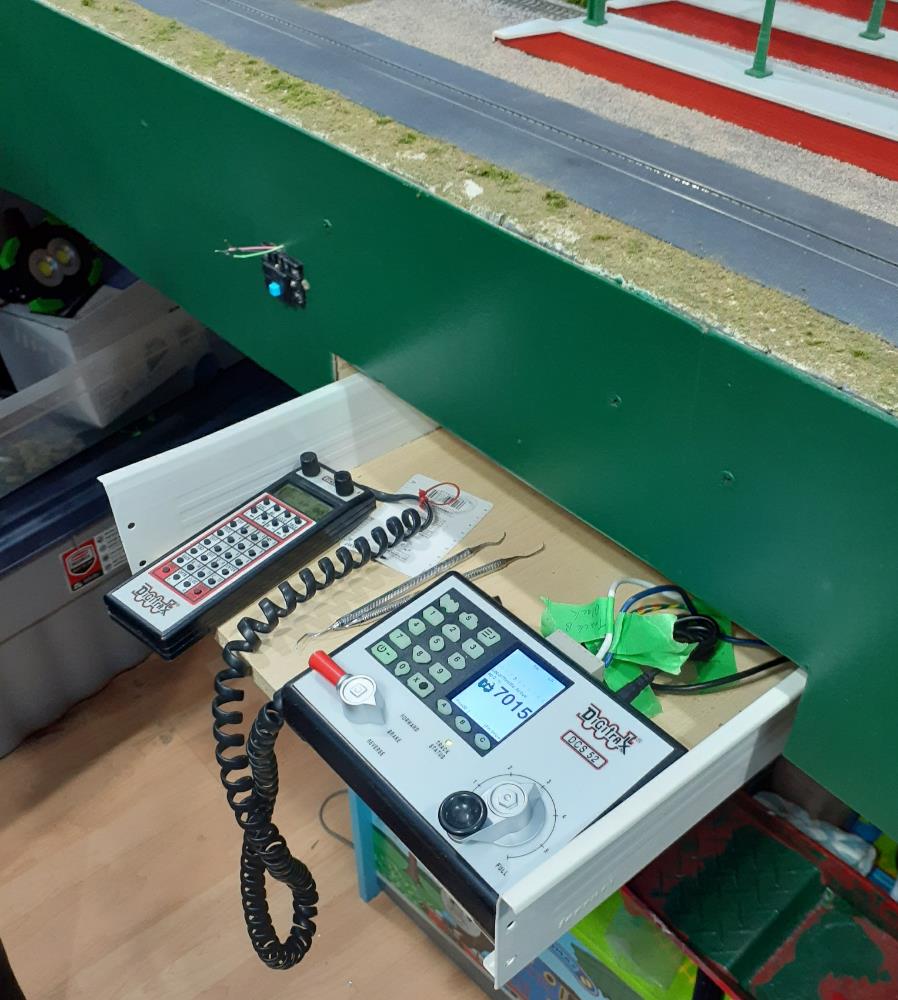 Track cleaning car operating on the inner track. The dangling wires of the track power bus will be trimmed and fastened to the underside of the swingout section. 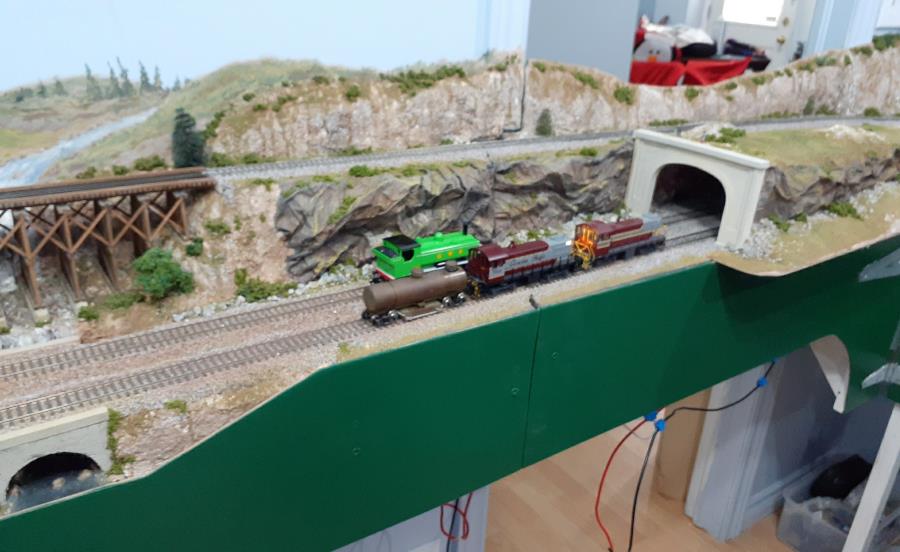 Swingout section open. We plan to cut a slot in the facia board so the that the swingout will rest of the ledge on the right for extra support when fully open. 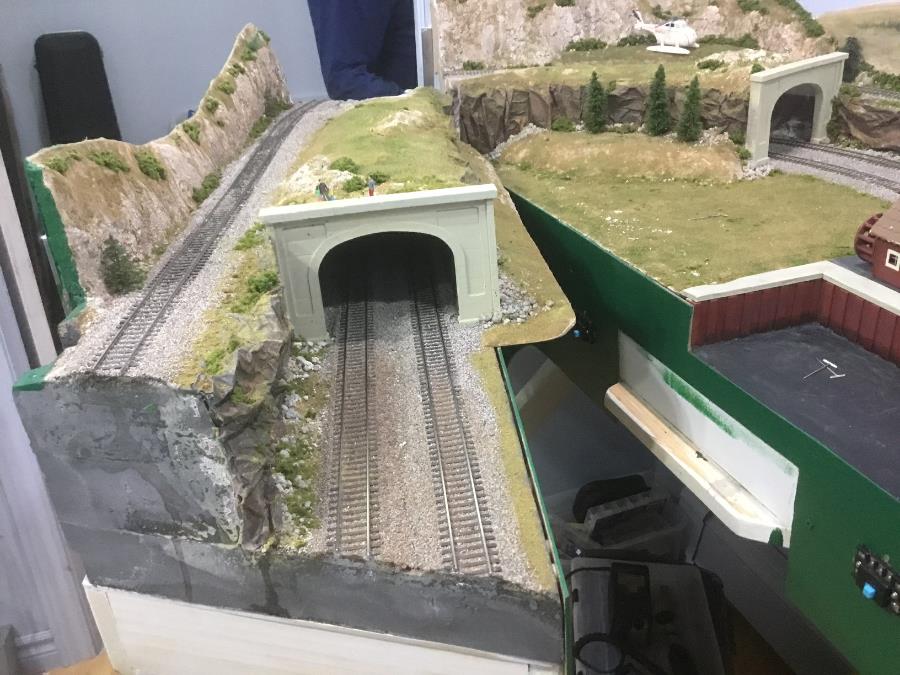 Harbour scene where boats still need to be glued down and water poured around them. 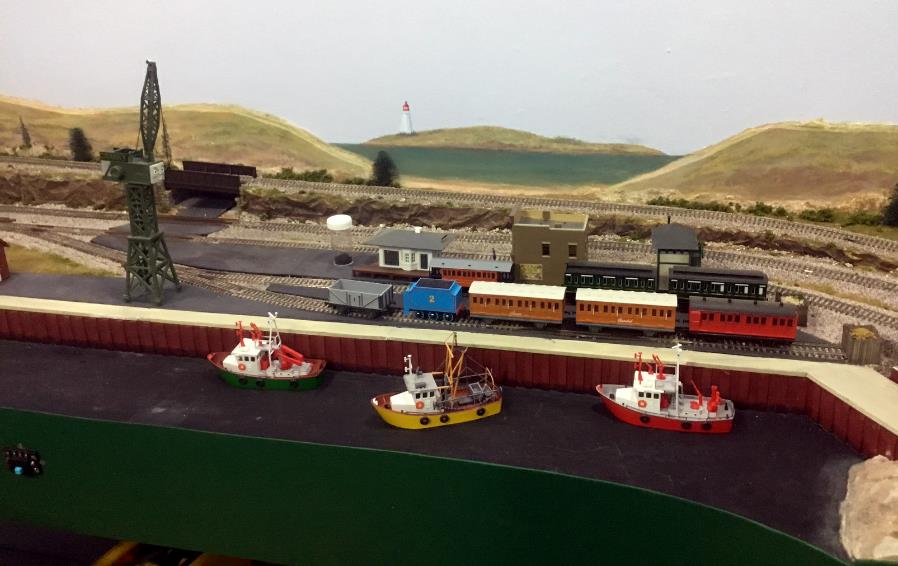