To make a photo backdrop I did a Google image search and found a photo that might work. Saved a screen shot, then ran it through Photoshop to get it to fit a standard sheet of paper. Then I printed some straight up and some flipped horizontally. I cut the sky off of the photos and glued them in place on the backdrop. Yes, the pattern repeats itself if you look at it closely. But if you're paying attention to the trains and the scenery (once there is scenery of course) you really don't notice. 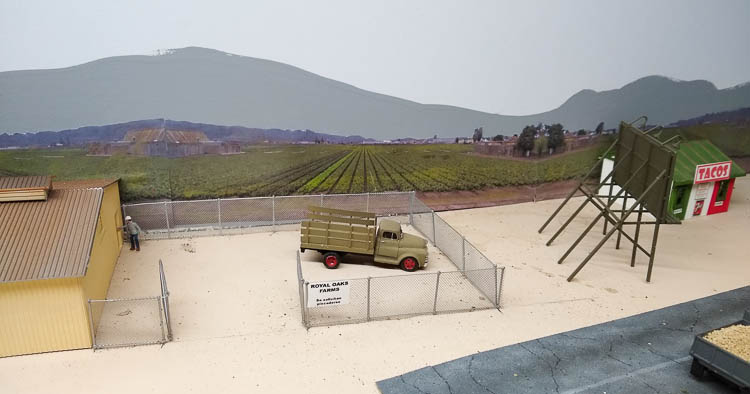 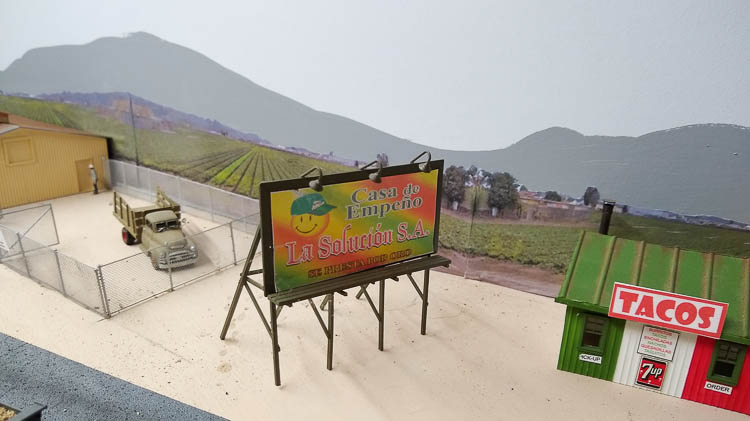 Normally, you won't be looking that closely. I think the overall effect works well enough. 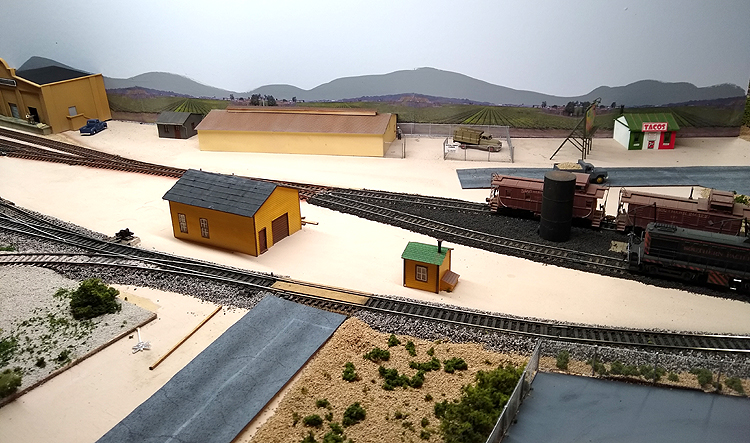 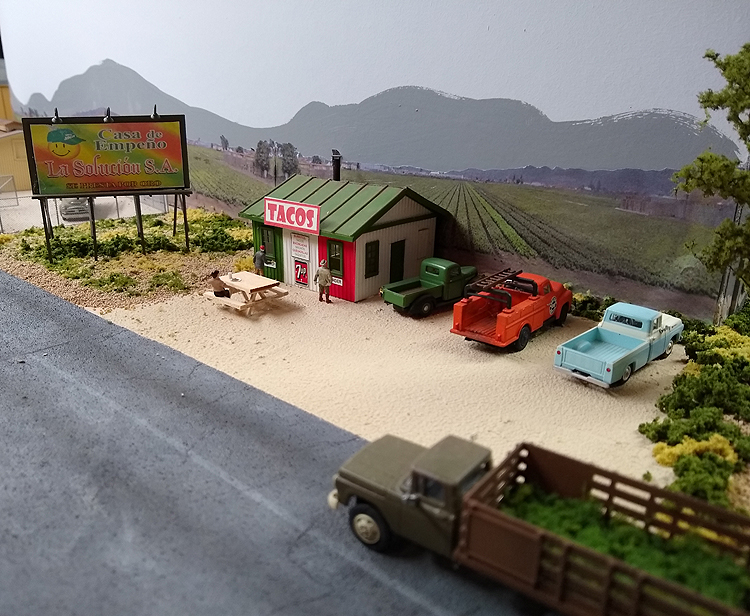 Not sure why that photo has posted twice. Sorry.

That has the look of Watsonville....
Click to expand...

Looking good, nice work on the chain link fence!
good to see you’re back at it!

Here's another rainy day project. Way back in 1992, there was an article in Model Rail Railroad Craftsman by Robert Smaus on building the SP's Dayton Avenue tower in Los Angeles. I always wanted to build it and now I finally have, sort of. I say sort of because this is a background building on a portion of the railroad that I have no plans to scenic. I really just did this for the exercise. I made no attempt to replicate the building in exact detail but I was more or less going for the "flavor" of it. For example, I avoided building the complex and delicate external stairs to the second floor. Just imagine they are in the back or on the other side. Speaking of that, the back and right side walls are just plain since they can't be seen in normal viewing. There are some other details I omitted just for simplicity sake. The building is made of Bristol board, the same material I used for the produce packing house further up on this page. The front wall is made of three layers to get the effect of the real building's deep relief facade. The roof is Evergreen corrugated sheet styrene. The window frames are .040" x .040" Evergreen strips. 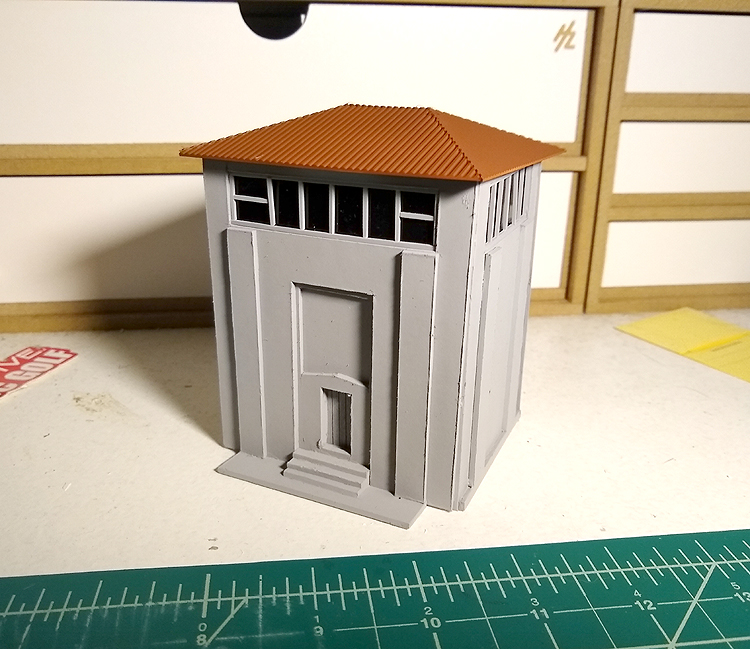 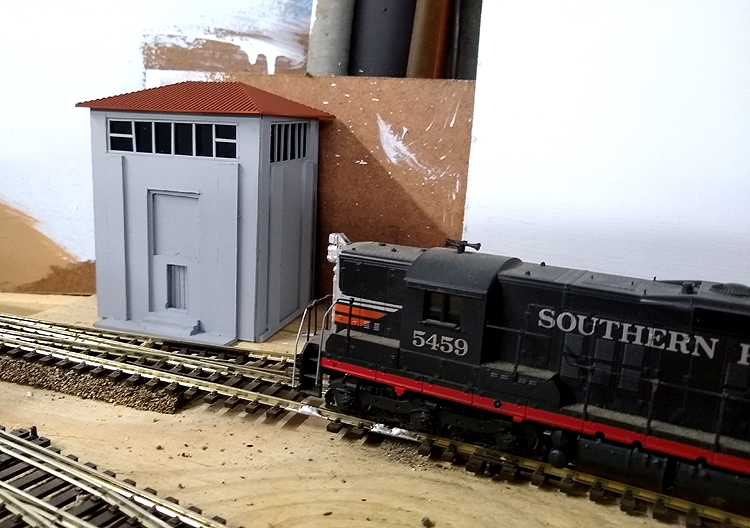 Maybe now I need to put in some scenery here after all.

Cause it looks real good! I love that Taco Stand as I posted a few years back.

Staff member
Just re read the entire build, as I had not seen portions of it.
We're gonna have to nail one of your feet to the floor, soes you don't disappear for long periods!
Great build - the SP "black widow" paint I like (raised on the Cotton Belt) - not so much the "bloody nose".

Some of you may remember this art board mock up I did several years ago. 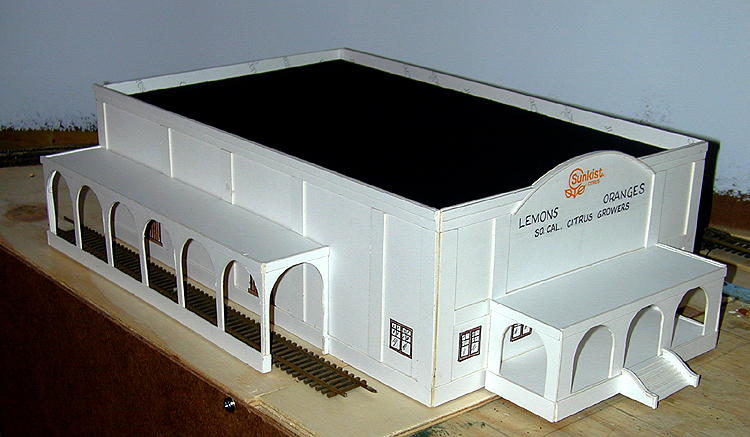 It was next to an interchange track for the Santa Fe and was supposed to be switched by that railroad. It existed just so I had at least some Santa Fe presence on my Southern Pacific layout. Well, the interchange track was too short to be useful and this building was just too large and was taking up too much real estate. So, it's gone and has been replaced by this: 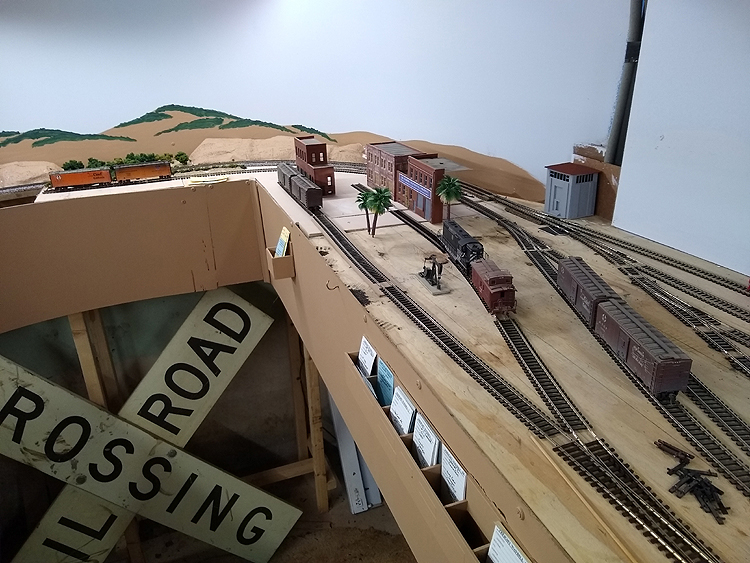 This will represent a small (very small) industrial switching area of Los Angeles. The two box cars on the right are on the interchange track, which has now been extended and curves around to where the two reefers are parked. The buildings on the two new spurs are place holders for now but I plan on probably two customers on each track. This will make the Santa Fe switch job an actual job worth doing. 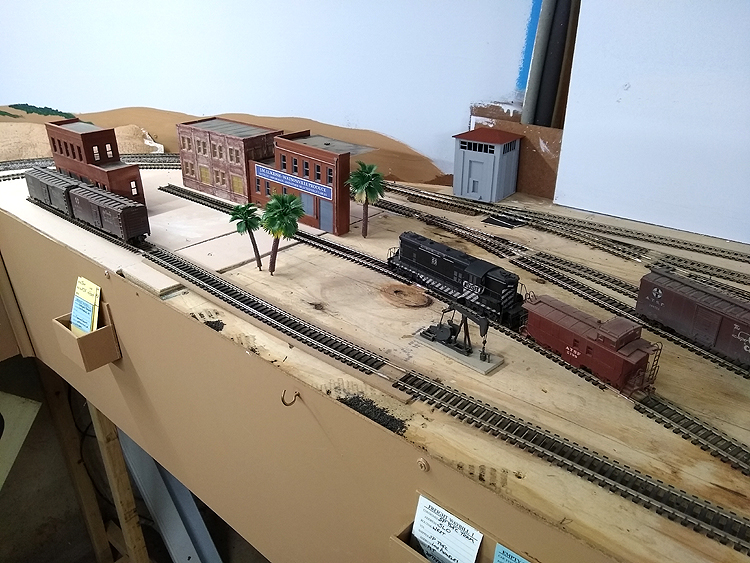 As for those two reefers, this is where the new produce packing house will be but this time the viewer will be inside looking out. 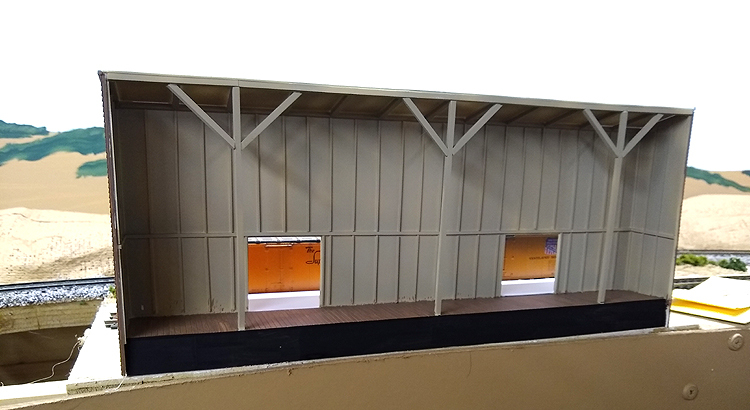 This is completely scratch built from Evergreen sheets and shapes. Obviously there is still a lot to do. Weathering and details like crates full of fruit, both incoming and outgoing, lots of figures and other details. Should be fun.

I think all of this is a big improvement as now I actually have something for that lonely ATSF switcher to do! 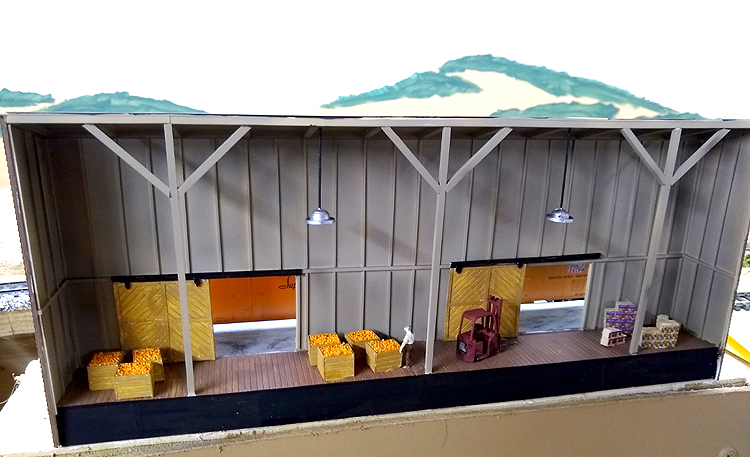 Staff member
NOT in any means putting your current work down, but I think the "mockup" had more character.
I do realize the space which was needed for it.
An excellent work of detail though on the new one.

I agree, I always liked that "mock up" It had the right look but I am so much more interested in operations right now. The more "work" I can come up with for the trains the better. I'm adding four or five more opportunities to switch cars with this change. Stay tuned, hopefully this new area will have as much gritty, industrial character.

Very nice. I see I'm not the only one with gaps connecting flex track. lol

I do like how you use the edge of the layout. Something I don't think I've seen before.

Those gaps will get filled with spare ties before the ballast goes down.

2002p51 said:
Those gaps will get filled with spare ties before the ballast goes down.
Click to expand... 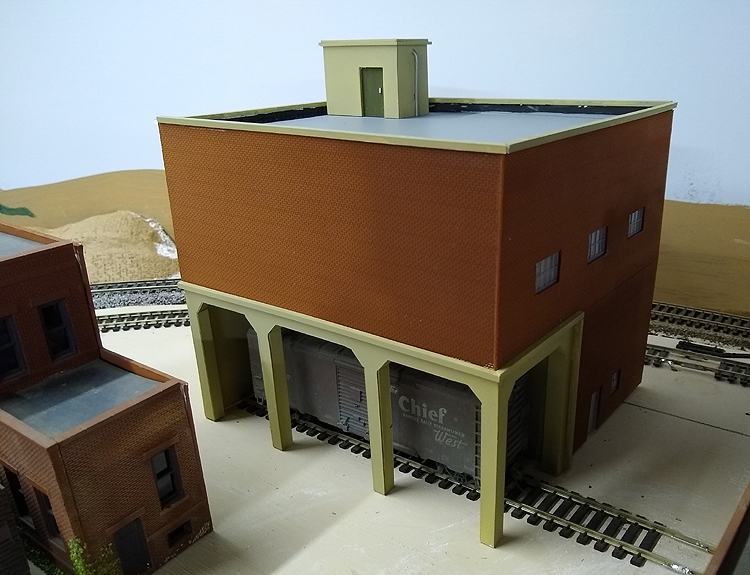 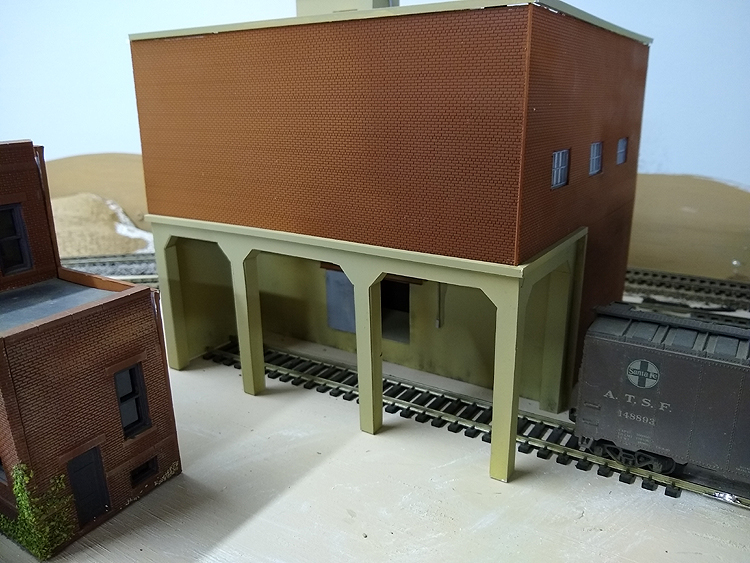 Working on the new industrial area I needed a small freight house. Time to break out more Evergreen. 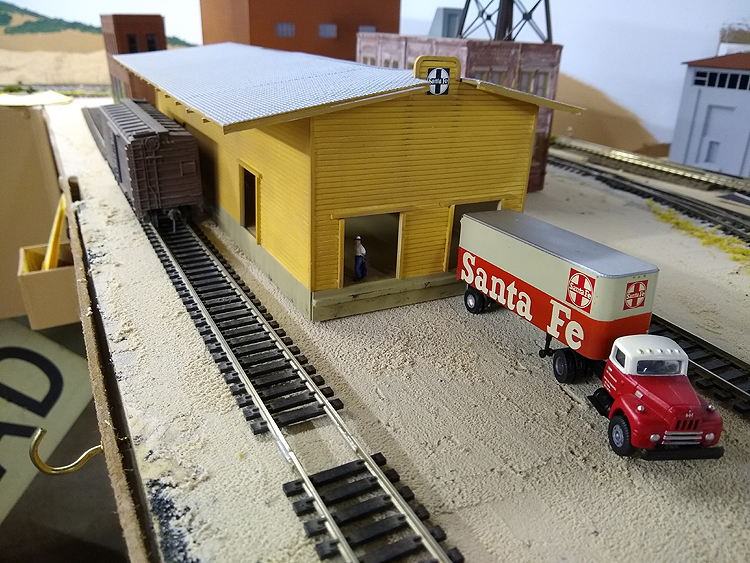 Here's a mock up of the entire area. This is pretty much the arrangement as it will be. The track is just stand-ins. I'm waiting on an order of Peco code 83 to arrive. 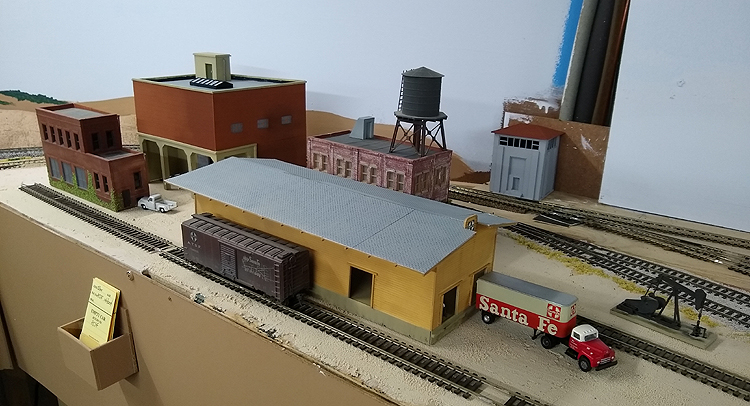 The track I ordered arrived today so it was down to the layout room and get some more work done. Got the track laid and tested so I turned to some details.

I made an alley between the buildings. 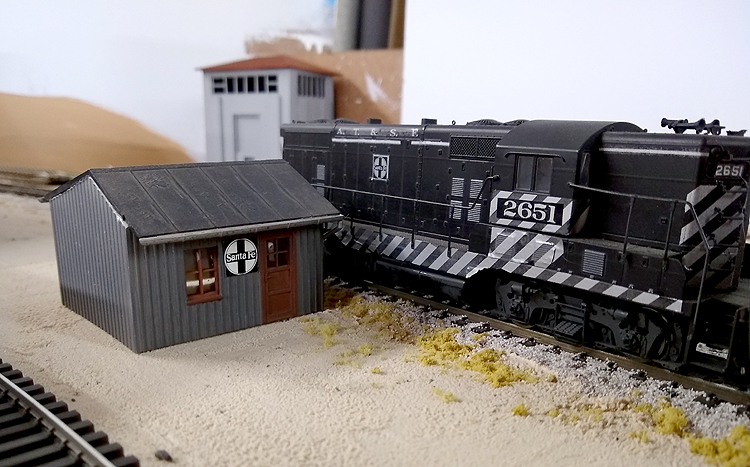 While I was at it I cut down the citrus packing house. I usually don't measure this stuff, just kinda do things by eye and it was definitely too tall. Looks much better now. 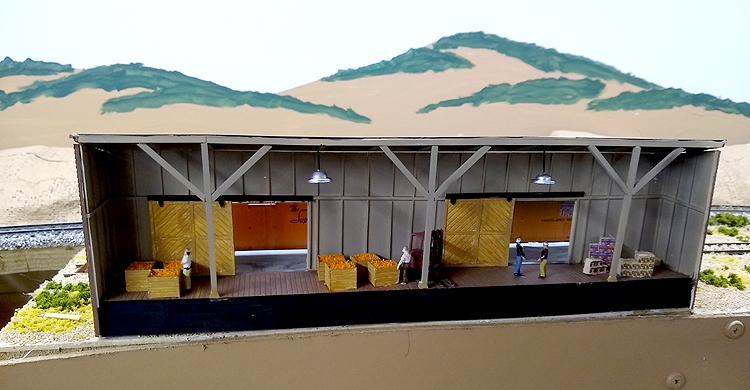 Today I got the basic scenery done. Still need a lot of details. Like broken pallets, trash, discarded dunnage, etc. Oh yea, and some tall palm trees, this is "L.A." after all. 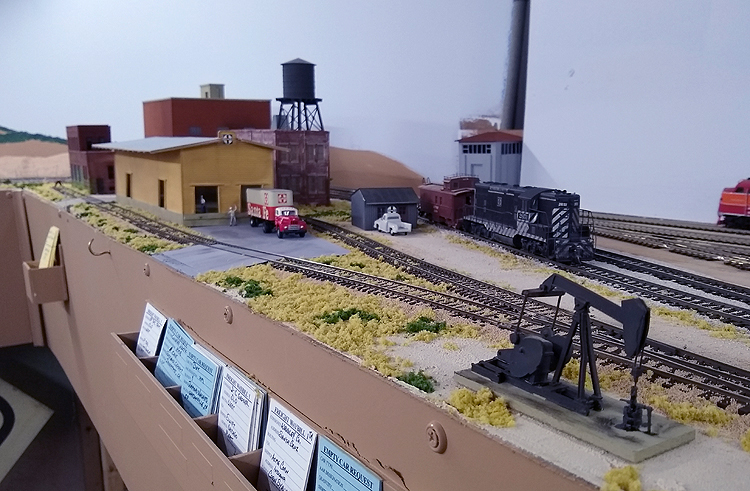 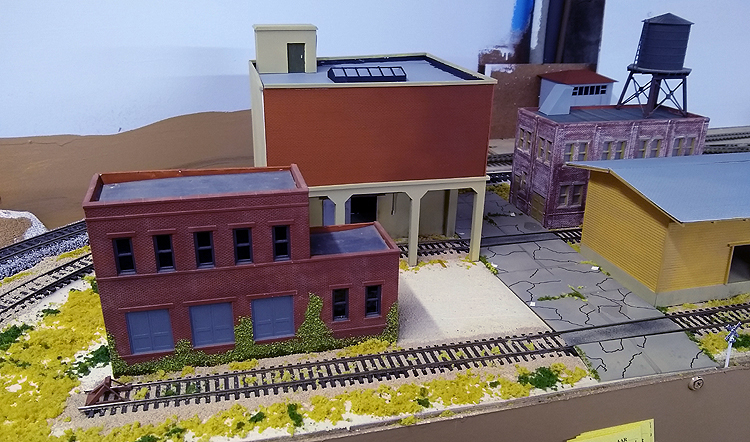