Those of you who have been following my thread on the N&W Abingdon Branch know that I have demolished that layout and started a new one. I won’t go into all of the reasons here but if you’re interested you can read it on that thread.

The new layout will depict the Southern Pacific Coast Line that ran from Los Angeles to San Francisco. Now, since I don’t live in an abandoned warehouse or a former bomber factory I obviously can’t model the entire 380 some miles of railroad. (For those among us who are math challenged, that would require almost 4-1/2 actual miles of HO gauge track!) So I have to do what every model railroader does and selectively compress the line down to a manageable size.

Sadly, this means that I don’t have room for any of the scenic 140 miles that the railroad ran right next to the Pacific Ocean. Nor do I have room for the Cuesta grade west of San Luis Obispo that challenged the power of the SP’s best locomotives to pull long trains up the hill.

No, the available space severely limits me down to just the important crew change point of the scenic San Luis Obispo area and Watsonville Junction. (And even those are heavily truncated) The goal is to model the heavy reefer traffic preparing to carry California’s abundant produce to the East Coast.

The benchwork is done, track has been laid (most of it anyway) and trains are running but there is a lot more to do. So follow along as I show you al some photos of the progress so far. As always, comments are welcome.

But first one last look at the old layout. Goodbye old friend. 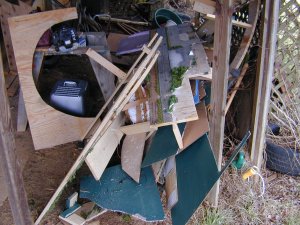 Here are the bones of the old and the staging yard in the background. These are all that will be retained. 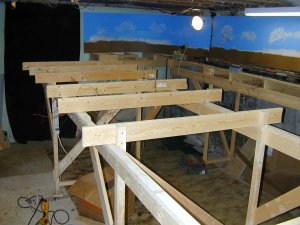 The new top and the beginnings of the cork roadbed. Yes it's all flat. While San Luis Obispo should be higher than the staging yard and Watsonville Junction, there really isn't enough track length to make reasonable grades so it will all be flat. 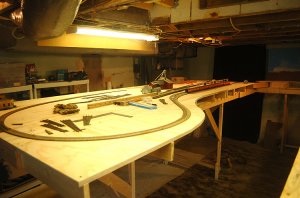 The main focus of the operations will be reefer traffic. 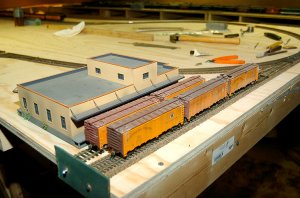 An icing track and a clean out track for reefers in Watsonville. Plus a caboose track. 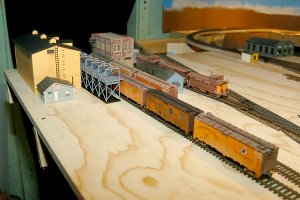 Fascia and back drop. This is the San Luis Obispo side. 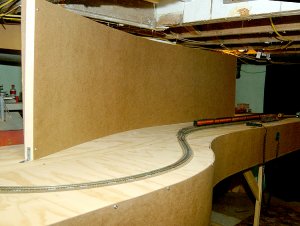 This is a mock-up of the San Luis Obispo depot made from art board. Eventually I'll build a "real" one. 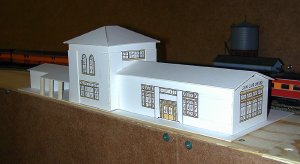 Backdrop painted and some distant low hills added. This is the Watsonville side. 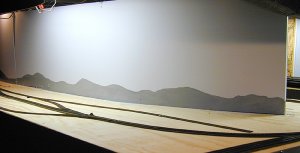 This is the staging yard from the old layout. It will represent Taylor Yard in Los Angeles but it will function as an open staging yard and will not have any scenery. 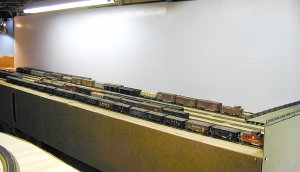 Another art board mock-up and another destination for reefers. 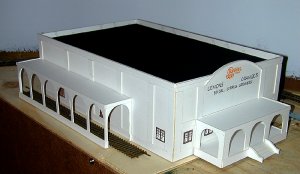 Not sure what this will be yet but I like it. It's a low relief building salvaged from the old layout. 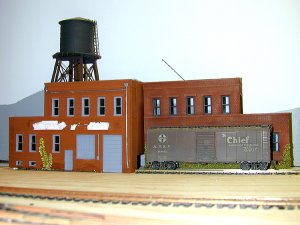 Here's another low relief building in Watsonville that I scratch built from Evergreen stock. 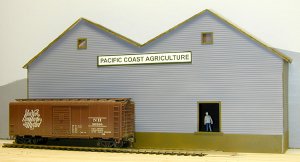 With all of the industries in Watsonville those workers need someplace to eat. This is also made from scratch. 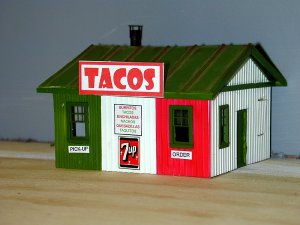 Except for the E-8 on the end, a few weeks ago these were all in N&W livery.

And now here's a rail pass for all of you. Stop by for a ride on the Coast Line anytime. 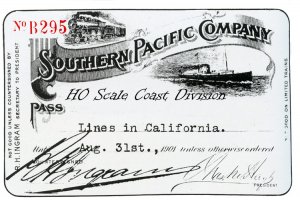 I like it! You're off to a great start.
Y

Really great start! I am really looking forward to see its progress. Thanks for posting.

You're off to a good start. Looking forward to your progress. I especially like your Taco stand, it is very typical of many of the ones that we see in Texas.
Willie

Here's an over all look at the Watsonvillle area as it is today. Keep in mind that the buildings against the backdrop are not permanently mounted yet and may still be rearranged some. It all depends on how I decide to route the spurs.

And this is the San Luis Obispo side. This is much closer to the final arrangement. The spur in the foreground is for a large wholesale grocer. 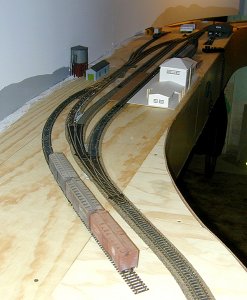 Wow you're really going to town!
Compared to most modellers you are in an old bomber factory! Lol
I'll be following the build for sure....

Btw awesome work on that station!!

Rico said:
Compared to most modellers you are in an old bomber factory! Lol
Click to expand...

I don't know about that. This "room" is only about 12' x 20' and I have to share it with the HVAC system and hot water heater!

I think this will be the final arrangement of these buildings. I like two of them sharing a spur and a separate spur for the last one. 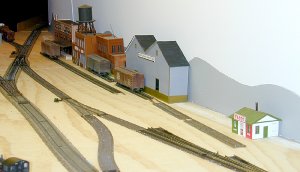 And I figured out what to do with the middle building. This is a recycled low relief building from the old layout. I did a little search on the web and came up with that business name and the sign on the water tower. 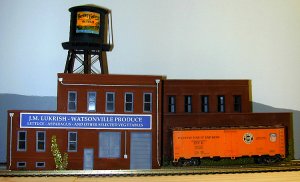 Mumbling in the corner

Will you be posting a track plan?

Great start on this! Looking forward to seeing it unfold.

DairyStateDad said:
Will you be posting a track plan?
Click to expand...

Track plan? I'll have to work on that. I haven't been using a track plan. Oh I sketched out a few things so I could figure out how much wood to buy and such but there is no real plan.

I will be following this thread closely! I grew up in Santa Margarita less than a half mile from the tracks and watched countless SP trains during my childhood.

It's funny - I've always thought that if I ever have room and time for a permanent layout, I'd model the SP in California, but I'd do EXACTLY what you said you were leaving out! I'd include some depiction of Santa Margarita and SLO with Cuesta Grade in between, and a small section of a generic coastal route.

Great to see the area getting some attention though, and you'really off to a great start!

Trust me, malibu43, if I had the space to do it effectively I would definitely include a good section of ocean side running and Cuesta! I also wish I had room for the Santa Susana pass, Santa Barbara, and Salinas! I lived in SoCal for 35 years and drove up and down the coast many, many times watching trains on that line. But this time I'm more interested in operation and having a lot of things to do in addition to watching trains roll by. That's the reason that Watsonville and San Luis Obispo took precedence.

Thanks for the update. I will also be following your progress. Looks like a point to point layout, which is what I have, but I do have some hidden staging tracks that does allow for continuous running. I really like the broad curves. I am a big fan of switching and I can see a ton of it on your new layout.

It is point-to-point as of now but the plans include a 3-track staging and reverse loop beyond Watsonville. That will be "Phase II".

I finished building this today: 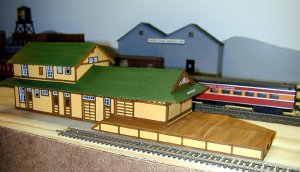 It's a standard Southern Pacific Type 22 depot from American Model Builders. These craftsman kits can be pretty expensive but I found this on on eBay for a reasonable price. It was a lot of fun to build, not easy by any means. Took about three weeks of part time work to finish.

Nice build. It's going to be a great addition to your layout.

DairyStateDad said:
Will you be posting a track plan?
Click to expand...

I worked up a track plan: 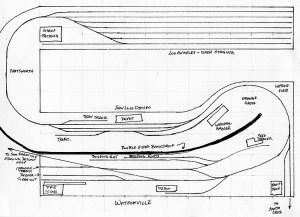