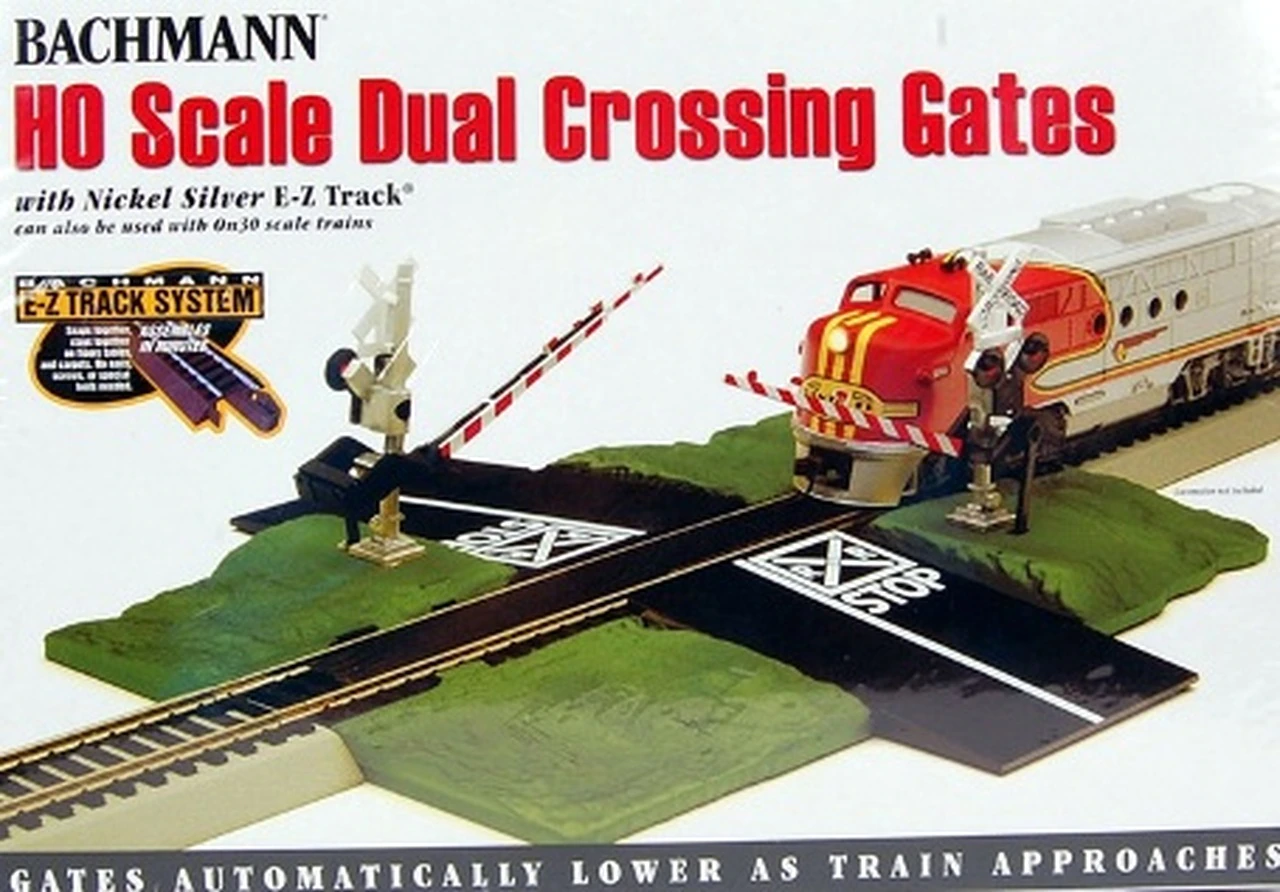 But that's not all, I would also like to light these up, the signals and even the gate arms!

I plan to insert LEDs into the crossbuck signals through the holes in the back (I figured that's what the holes were for, to insert lights through) and might use ModelModz LEDs like I did with the signal in this post Lighting Up a Bachmann Crossing Gate Signal | ModelRailroadForums.com only I'm debating if I should use the red LEDs or the white LEDs since the signals come with red lenses (I used red LEDs in the signal in the other post but that was only because those LEDs were originally intended for my crossing gate arms.)

Now to figure out what LEDs to use on the Bachmann gate arms. What I would do is cut off the fake gate lights, or shave or trim them off and carefully without accidentally breaking the rest of the arm (these are made of plastic!) Then mount the LEDs on the arms. 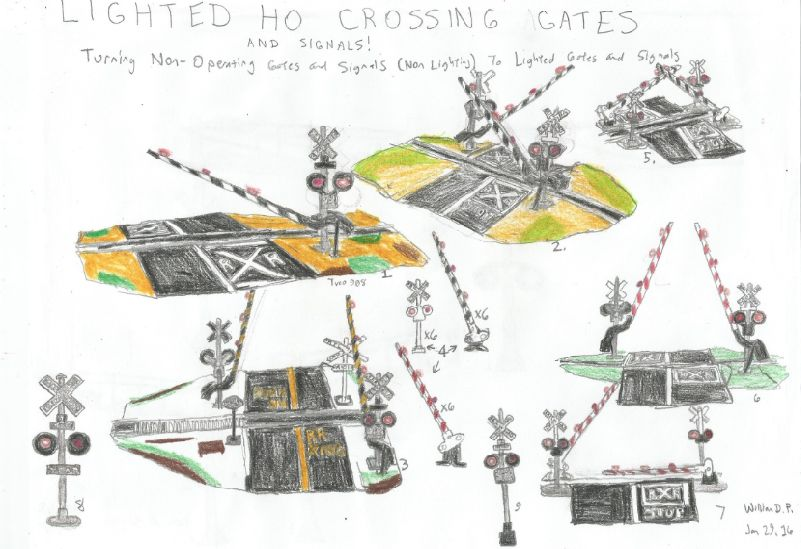 But unfortunately nobody seemed to be interested in doing so! And if there are any who did this, there aren't any photos of such or there are but they're difficult to find! So I'm planning to try to do this myself (You know what they say: "If you want something done, you have to do it yourself.)

I would like to try to do this in a few months or so, maybe next year, circumstances permitting, and hopefully show it and be an example for other model railroaders!

Will - I thought about you when I was walking past a couple of crossing signals down by the tracks. So I stopped to take a couple of photos.
These are from this morning: 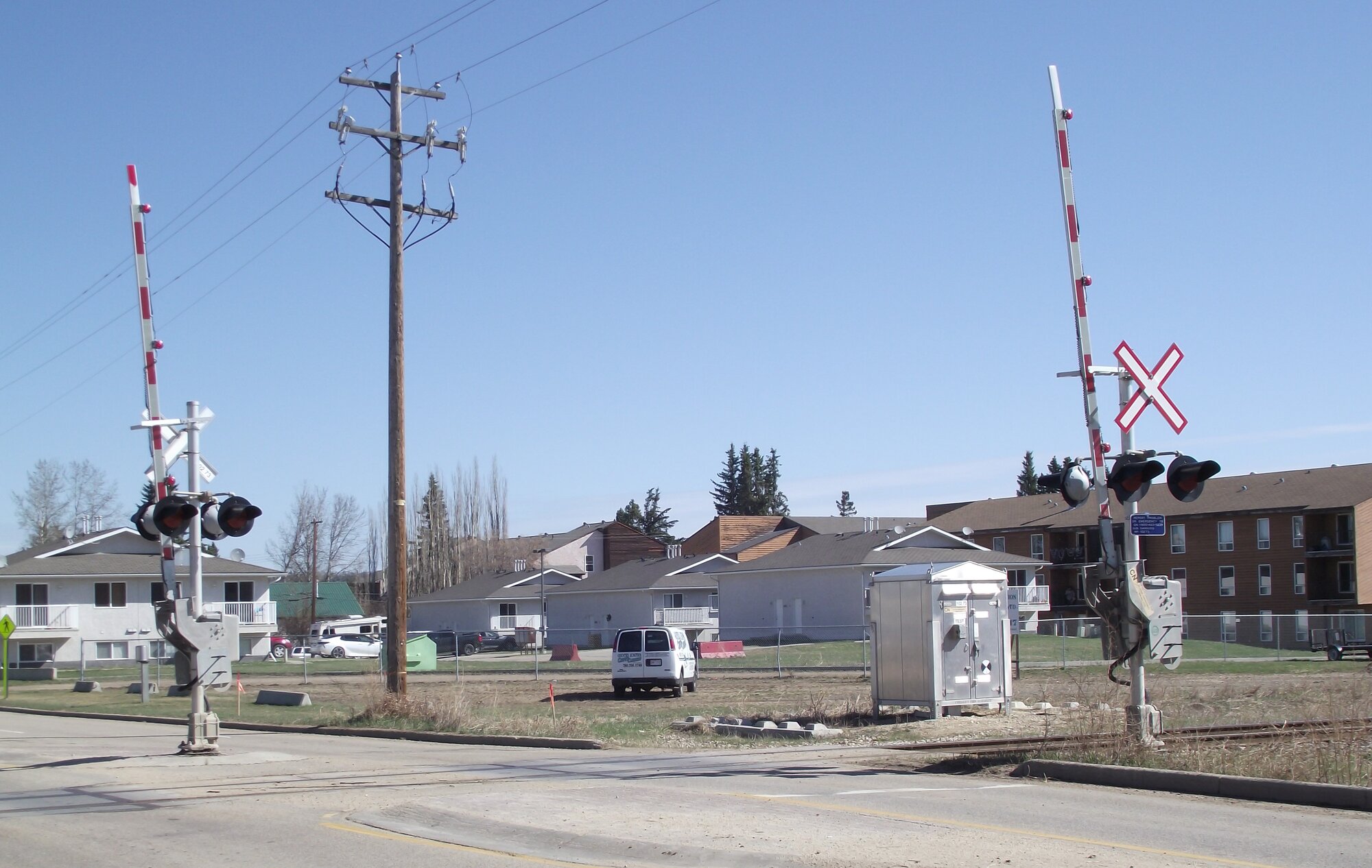 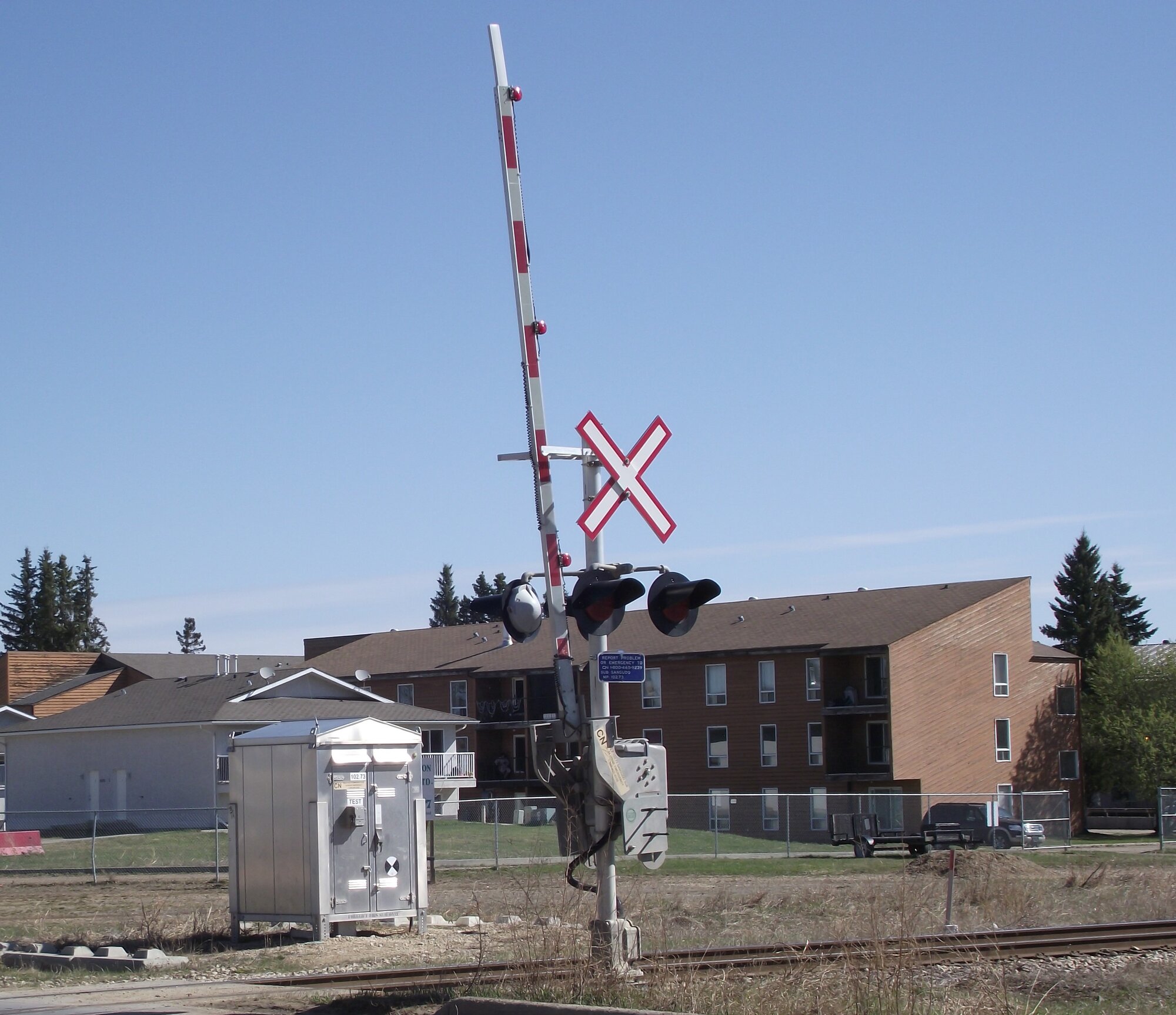 I'm fairly sure that little structure has something to do with the signals.
That crossing has only been there for about 10yrs, so those signals are relatively new.

Very nice, thanks for taking pictures of those! I did want to know where these signals were (city and province) so I could look these and other crossings up on Google Street View.

12" lights with 20" backgrounds as I like signals best and they look to be LED signals. No bell on either signal. Gate lights are 4", possibly RECO and possibly LED. And from the label on the gate-arm support (gate holder) I see the crossing belongs to Canadian National Railway.

Yes that structure has something to do with the signals, it's the relay bungalow or circuit box. Railroad employees can manually operate or test the signals with that. And it looks like a new model (older models of relay boxes are flatter.) I don't know if they do that in Canada but here in the USA, the relay boxes have the crossing DOT number (it has six digits and a letter at the end, it's kind of like a license plate number for the crossing, at least to me!) Those same numbers can also be found on signs posted on the crossing sign or signal, like the blue sign in white letters below the flashers!

Thanks again for the beautiful pictures! This is one of my crossings by the way 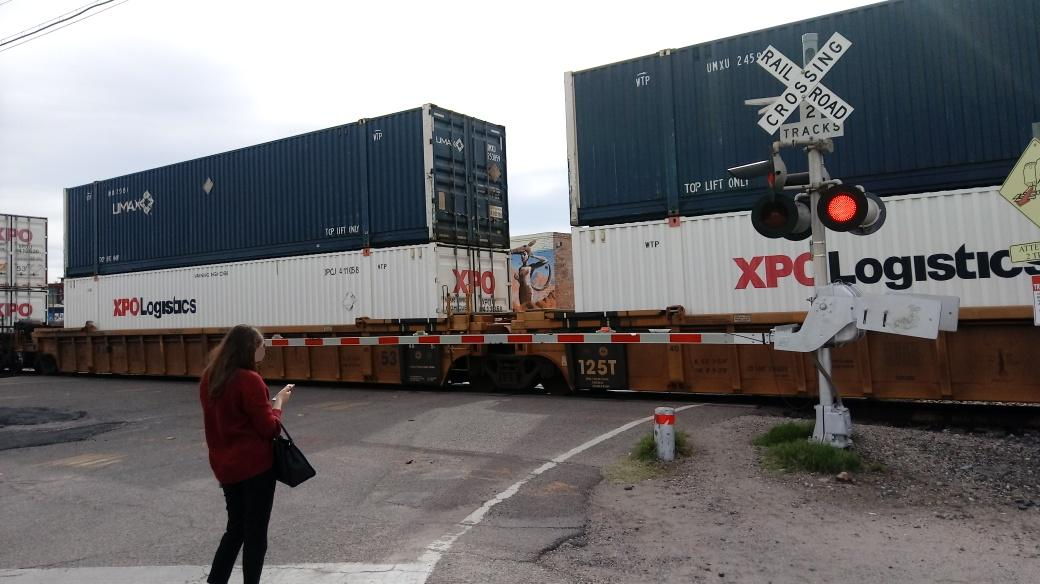 This one is on 7th Avenue in Tucson, Arizona, taken in November 2019, and this was the last crossing I was at before the COVID-19 outbreak. Like in your picture, the signals have 12"x20" LEDs, except these are Electro-Tech's brand LEDs (mistaken for Union Pacific LEDs!) The side-road lights though are 12"x24" (replacing 8" lights.) The gate lights look like they're Alstom Aurora LEDs (which are not as cool as the 4" lights in my opinion!) They could also be National Electric Gate clear LEDs.) The bell on this signal is a National Electric Gate electronic bell (replaced a Western Cullen Hayes electronic bell sometime before I got there,) the other bell, which you cannot see, is a General Signals type 1 electronic bell. Most of the LEDs at this crossing are Electro Tech's, but there's also a Harmon LED and a 1st-Generation Miller Ingenuity/Western Cullen Hayes LED, they're on the other signal at this crossing.

These crossing gates work on a feather weight spring system. Weight of the loco and cars physically push the gates down. Don't know how you are going to use that to trigger the electronics without interfearing with the dropping gate.. Might have to trigger them with a read switch and a magnet on the bottom of the loco, or standard electronic detection before and after the gate section.

@Iron Horseman That's kind of what I was aware of although I didn't know it was called a feather-weight spring system. I had a Bachmann automatic crossing gate set back in 1999 (my grandmother who worked for Amtrak at the time got me one.) It didn't have any lights, just the gates and the signals for looks but the gates operated, and the piece between the rails triggers the gates, making them go down when the locomotive and cars run over it, but unfortunately the gates don't stay down, they go up and down, up and down as the train passes, which is totally weird!

I got another one like it in 2004, except this one came with lights and bells, only the lights didn't flash alternately and the bells didn't sound like crossing bells, they were high-pitch fast-ringing bells along with a drill sound or an electric-pencil sharpener sound. The lights also flashed fast! I didn't like it all that much! I'm talking about this item 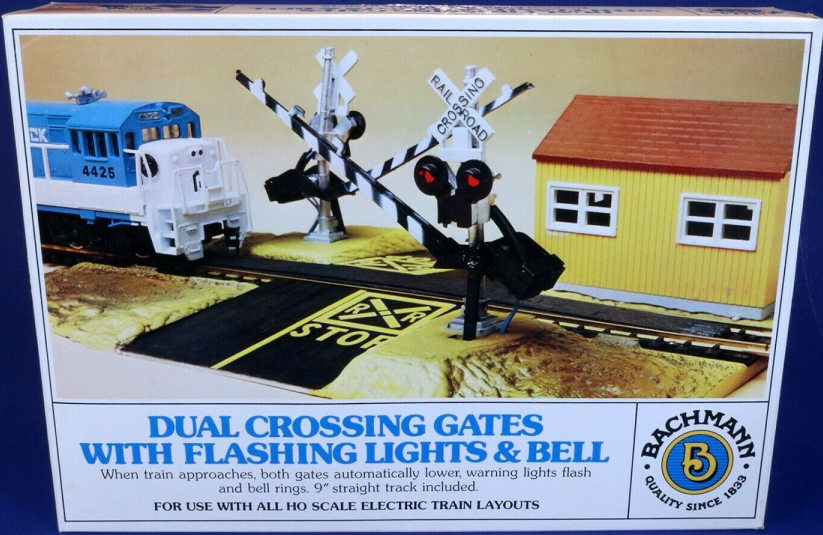 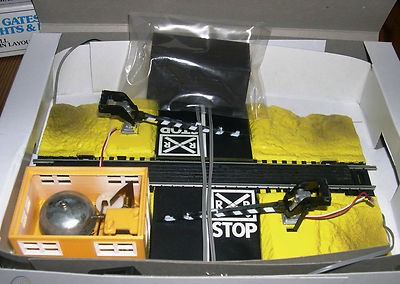 Here you can see the bell. The crossbucks are probably hiding under that building roof in that plastic wrap. and The things that trigger the lights and bell are also hiding. Source WorthPoint HO Model Train Dual Crossing Gates w/Flashing Lights & Bell - Bachmann No. 46214 | #458443534 (worthpoint.com) It's very hard to find good pictures of this item!

But if you're looking for realistic crossing lights and bells, this is not the crossing gate set for you, so I've learned the hard way!

But this is what I was planning to do 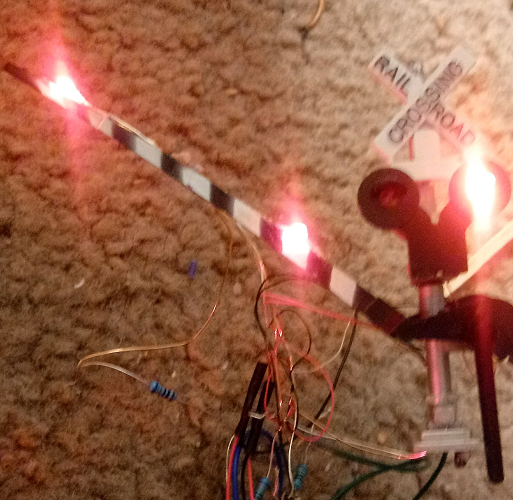 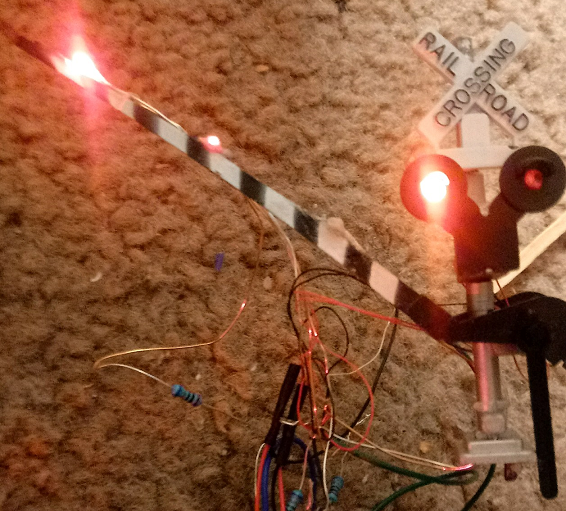 I lit my crossing signal and crossing gate, using LEDs. The crossbuck is lit with ModelModz Ultra Nano SMD LEDs with prewired resistor while the gate arm is lit with Amazon Bowerful Micro Litz SMD 0603 LEDs. This started off as an experiment to see if the Amazon 0603 LEDs would work with the ModelModz LEDs (since I couldn't get my 0603 LEDs to work with my Busch 5934 signals but was able to get the ModelModz LEDs to work with the Busch signals. And then, I wasn't originally going to do this but I decided to clip off the fake gate arm lights and replace them with the 0603 LEDs and superglued them in place although I couldn't get the innermost gate light to stay in place, it kept coming off or sticking to me! Also the middle light isn't lighting brightly.

But this kind of what I wanted done! Lighting the crossbuck signal and the gate arm and with LEDs!

Although I solved the lighting problem, I still have some other obstacles. It's harder to move the gate arm with the added lights and wires, also hard to keep the lights lit when moving the gates or transporting the signal. And I'm thinking now that if this gate was on a crossing, it would be harder to move the gate up and down by itself when the train comes, especially with those wires and leads.

Fortunately what you see in the photos is for display purposes only and a test of what I wanted to do, I don't plan to use this on an actual crossing. All I wanted to do was see if the lights would work and how they would work, which they do. But if I do get another set of crossing gates, lighting the crossbucks won't be a problem though I'll need a flasher unit (I plan to use a Lionel 153c contactor to make the lights turn of when train comes and off when train leaves and use 9V batteries to power them up) but now I have to see how I'm going to make the gates still go up and down.

Oh and to flash the lights, I used this flasher unit that NJ International no longer makes 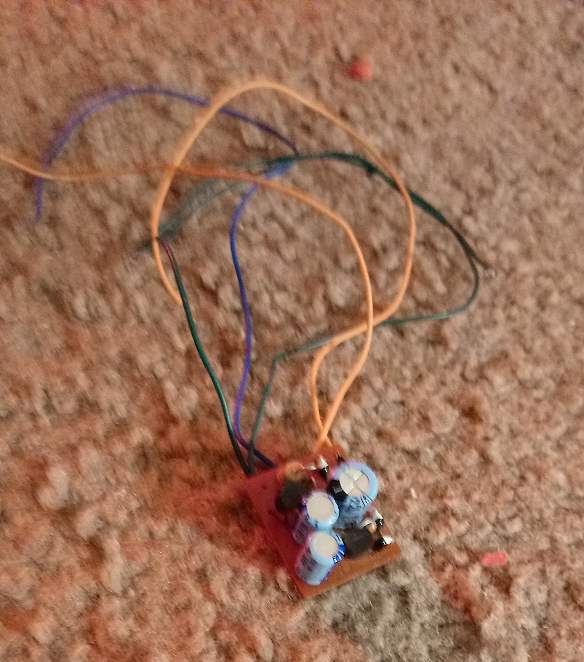 But I'll have to use other flasher units, like the ones made by Circuitron. The Circuitron FL-2 unit should be sufficient since these are LEDs and only eight LEDs would be used (four on the crossbucks and four on the gates (the lights on the tip of the gates do not flash and won't be connected to the flasher units, they'll be connected directly to the power source, with resistors wired to them of course!))

So yeah, I finally did something I wanted to see and did something I hoped others would do. I'm also hoping I set a pattern for other model railroaders who use similar crossing signals or gates, but only the Bachmann operating dual crossing gates, I don't know how to do it with the LifeLike crossing gates since the signals have different and bigger lenses than the Bachmann signals! Wouldn't know what LEDs to use on the Lifelike crossbucks!

By the way @Iron Horseman , funny you should say the word "feather" because when looking up railroad crossings in Mexico, almost all of which are passive, very few have lights or lights and gates, in the translated version, they call the gates "feathers!" Well they call them "insertable feathers!" I tried to find a link but I cannot seem to find one, unless the page got deleted. They also call them "pens" https://www.noroeste.com.mx/mazatla...n-cruces-ferroviarios-de-mazatlan-FBNO1003413 (Translate to English if you're using Chrome)
You must log in or register to reply here.
Share:
Facebook Twitter Reddit Pinterest Tumblr WhatsApp Email Share Link