Staff member
Looks really good, Mark!
Comparing the size - I'm a little confused as to what you would be gaining switching to Sn3? I do understand that some details will be slightly larger, but I think you should consider On3 or On30 - a size that you can really cut your teeth on in detail?
N

I have to agree with you, other than Sn3 being narrow gauge, size wise there isn't much difference! I bought the kit so I could physically see what I was getting into. Like I said before, P-B-L Sn3 kits are a bear cat to build and to build a fleet of cars would be very difficult, to say the least!

Was there really 30 inch gauged railroads? I will be looking into On3, what would a minimum realistic On3 curve radius be?

You have to as someone who knows what they are talking about. Above my pay grade - LOL

Staff member
Depending on what you what run I would think 18" would be the absolute minimum radius and that would be for old timers. For any small 4 axle modern equipment, your probably looking at around 20" and for any 6 axle modern engines 24".

These figures are based on HO radius so don't quote me as being 100% correct.

wombat457 said:
Depending on what you what run I would think 18" would be the absolute minimum radius and that would be for old timers. For any small 4 axle modern equipment, your probably looking at around 20" and for any 6 axle modern engines 24".

These figures are based on HO radius so don't quote me as being 100% correct.
Click to expand...

All of the above dimensions are approximations. To get HO Scale measurements, take the O scale and divide by two. G has so many different scales that I have no idea what would be needed.

The Sn3 Scale has always been one of my favorite scales , perhaps the Late Great Paul Scoles had some influence on me with his Pelican Bay and Navigation RR . I had a few meaningful conversations with Paul via emails right upto a week before he passed. I was very interested in his scale. Funny someone mentioned Chris Lyon, I travelled across to Ottawa to visit Chris and must say he was a true gentleman , him and his wife took us out and about in Ottawa , had a nice supper but above all the main purpose was he taught me his technique for painting backdrops but before I travelled to visit with him he had his wife hold the camera while doing a video to show his technique. When he taught me his technique we went to a modelers home layout , it wasn't Bill Scobie's but it was a beauty. On a seperate trip when I travelled to Ottawa area to pickup a 63 Vespa I made a point of going to visit Mike Hammers RR, not Sn3 but definatly well worth the visit and a pleasure .
If I were starting from scratch I think I would be doing Sn3, in the long run it would have been better for building with my worn out eyeballs.
It will be interesting to see how your Sn3 adventure pans out for you Mark. Box car is looking great.

Staff member
Sorry I thought we were talking Sn3 scale which, apparently, isn't all that different to HO. O scale is going to be very different then and what I put forward wont apply.

MY G Gauge radius was - I don't know. I was using sectional track so the radius was fixed. All I can say is it was the largest radius that I saw available for sectional track at the time. I'm guessing it was probably close to 30" though, or there abouts.
N

Tony, We have been talking Sn3. Sherrel and I discussed how much size-wise HO standard Gauge and Sn3 were alike and that in comparison there isn't much to be gained by switching from HO to Sn3. For me the jury is still out and I am looking into other options. Not giving up on Sn3 just yet, just interested in all scales Narrow Gauge.
N 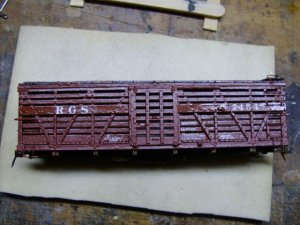 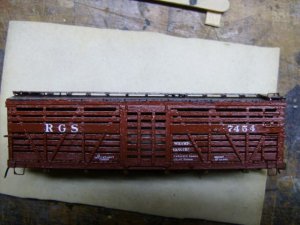 Here is a couple photos of the Sn3 P-B-L Stock Car kit I've been working on. This is the two sides, painted Special Oxide Red with a squirt of Gloss Coat on it, so I can put on the decals. The Road Number is made up from individual number as my choices where 7451 to 7474. I chose 7454 for no other reason than the 4 and 5 where right together. I'm putting the RGS and Road Number in the upper right corner on the ends at this time. When I get those done I will maybe weather the car some. After my confusion with the instructions, the car is coming together nicely!
Last edited by a moderator: Nov 25, 2017

Toot, The model is a Rio Grande Southern Sn3 gauge Stock Car, the RGS was a Colorado Narrow Gauge line. The reason I am building it was to give me something I can hold in my hand, look at, admire and compare with my HO stuff, to see if I really want to scrap what I've built so far and go Whole Hog into Sn3. The jury is still out. Were I to build an Sn3 layout, I would hand lay all my track. However, commercial track is available in Sn3 gauge along with turnouts. P-B-L sells Sn3 Flex Track in Code 70 and 55. They also sell Turn-Outs for Sn3 #6 left and right hand in Code 70 and 55.
Last edited by a moderator: Nov 26, 2017

NP2626 said:
Toot, The model is a Rio Grande Southern Sn3 gauge Stock Car, the RGS was a Colorado Narrow Gauge line. The reason I am building it was to give me something I can hold in my hand, look at, admire and compare with my HO stuff, to see if I really want to scrap what I've built so far and go Whole Hug into Sn3. The jury is still out. Were I to build an Sn3 layout, I would hand lay all my track. However, commercial track is available in Sn3 gauge along with turnouts. P-B-L sells Sn3 Flex Track in Code 70 and 55. They also sell Turn-Outs for Sn3 #6 left and right hand in Code 70 and 55.
Click to expand...

Didn't know about the commercial track. For you, I would think it's the perfect modelling. Give in to the urges and temptation, then you can share the adventure with us. Always liked adventure stories. Especially with pictures.
N

Toot, being the cautious person I tend to be, there's a little more to it than just "Damn the Torpedos, Full Speed ahead"! I agree that Sn3 fits right into my Wheel house. However, at this late date in my life, I'm unsure if the reward is worth the hassle! So, still thinking. The big question at this time is; can I put enough of the Rio Grande Southern in my basement to represent it well enough for my tastes? To find out, I need to draw a track plan and that is next on my "to do list".

You sound just like me, so yes, your as annoying as I am!
N

I have put on the decals on my Sn3 Stock Car and I think the car turned out respectable. When I am completely done with it I will take a batch of photos.

Staff member
I'm surprised, Mark, that with your skill, and the fact that you like to "build" that you should try "O" scale or "On30".
To Me - Sn3 is too close to HO size. I'm going to go for On30 - I have finally decided! Then I can scratch build (which I lie to do) and stillrun a couple HO trains on the same track ..just that any structures will look too large. Also, On30 will accommodate radius, some locos, as low as 15 inches!
Last edited by a moderator: Nov 27, 2017
N

All of the following is simply philosophical meanderings!

My HO layout is a mountain line. It was built free lanced. Once I got interested in a specific Railroad, I fit what I had built into the Northern Pacific's Butte Shortline. My railroad runs from Logan Montana, through Butte and on to Garrison Montana. I was O.K. with the fact that nothing on the layout specifically matched anything on the Butte Shortline. I figured, it's a model railroad, even if I had specifically modeled it after the N.P.'s Butte Shortline, there would need to be compromises, therefore since all model railroads live with compromise, any new layout I would build would need to live with compromise, also.

Were I to start over, I would like to model scenes that actually existed with selective compression, of course. There is a thread going on right now in General Discussions on how the hobby has changed. A problem for me is the fact that the vast majority of the market has completely lost interest in the "building models" aspect of the hobby. HO, which used to be the "Modelers Scale" is becoming just another toy train scale, not on like Tin Plate, although much more highly detailed. This loss of interest in the 'Building Aspect" is over flowing into the other scales, sort of excepting Sn3. And even P-B-L, a major proponent of Sn3, makes Ready to Run cars for Sn3!

With my HO layout, I likely have more freight cars than I need. Occasionally I attempt to sell off some of what I feel is overstock. I sell them on Ebay and really can't get what they are worth. However, Ebay is chalk-a-block with HO Rolling Stock and much of it over priced; so, my guess is that is why stuff doesn't sell to well on Ebay, anymore!

Simply put, I am in a quagmire! The sensible tack to take, is to stick with my HO Layout. However, I don't like the direction HO is taking; but, I have all the rolling stock I need, so I can live with it. I don't like that my layout has a Duck-Under and that I did not provide for the eventuality of it's removal from my basement. It also is limited in it's ability to be run realistically! Were I to start over, I would not have any Duck-Unders and I would build the layout in removable sections, easy to remove from the basement. My favorite RR is the Rio Grande Southern and it is exceeding my interest in the Northern Pacific!

So in the above 6 paragraphs, I have outlined where I am stuck in the quagmire and how I got there. These are ramblings from someone dedicated to the hobby and I expect not unlike where everyone get's stuck. Not asking for help. I got here on my own and if I can come to a conclusion, that conclusion will be obtained on my own. Thanks for following along! Many times for me, if I can put my thoughts down on paper, it helps me figure things out!
Last edited by a moderator: Nov 28, 2017
You must log in or register to reply here.
Share:
Facebook Twitter Reddit Pinterest Tumblr WhatsApp Email Link