I'm planning my first DCC-layout. It will be N scale, Peco c55 with electrofrog turnouts.

I'm preparing to build a flipped left-to-right version of Granite Gorge and Northern.

One of my locomotives is too long to be able to turn on a turntable.

Would it be doable to add a scissors crossover on the bridge, the only reasonably straight section where both tracks run in parallel? 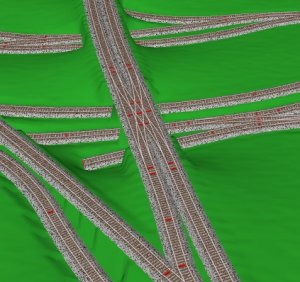 This obviously means the my feeder wires will cause a conflict.

From left to right they will be maroon, yellow, yellow and maroon.

I can easily make a decent section or rail isolated, and possible to connect electronically to the next section of rail in either end. I'll need to do this at least twice to make it possible to move my giant locomotive from one track to the other and back again.

This means I will have to stop the locomotive once it has driven passed the scissors crossover, restore the polarity of the isolated section, and then move on from there.

Would it be possible to automate this is any way, similar to how you would solve a return loop?

Since this is not something I would do often, and possibly never during normal operation, I could of course find an simpler solution, without having to resort to the big crane in the sky.

An auto reverser will work here as well.

I have never understood the attraction of that layout design. However it remains one of the most popular ones in the Atlas catalog.

Would it be doable to add a scissors crossover on the bridge, the only reasonably straight section where both tracks run in parallel?
Click to expand...

This obviously means the my feeder wires will cause a conflict.
Click to expand...

It shouldn't. When boiled down to its essence this is a double track figure-8. The crossover would just be a crossover from one of the 8s to the other. The power should be running the same way. The reversing "loops" are actually the more straight tracks that run along the top and along the bottom. In addition to reversing they also perform the "crossover" feature you are seeking to add with the double crossover.

From left to right they will be maroon, yellow, yellow and maroon.
Click to expand...

Once again shouldn't be. You might want to check your wiring plan and see what is going on. Draw a simplified diagram of the layout and start with wiring the two figure 8s. The two figure 8s should be wired in parallel with each other, you will need two DCC automatic reversing units for the other tracks. Fixing this will eliminate the other problems of crossing a locomotive you are talking about.
Last edited by a moderator: Jul 19, 2013
C

This plan dates back to long before DCC was even thought of.

Apart from flipping it, I have only added one extra team track for the farm, a pocket for my switch engine to avoid having to use the station siding when working the yard, and the tracks in each end to my next module and to staging. The narrow track working the mine is new too, of course, but since it does not connect to anything else it's hardly relevant.

If you try driving a train from staging to the factory, from the yard to the farm , from there to the passenger station (P), then the sawmill, and finally back to staging, without using the scissors crossover, you will notice that there is no need for reversing modules at all.

Because the switch-over tracks run as they do the result will be that trains on the long bridge diagonally over the river will run in opposite directions.
And trains will only ever cross the bridge near the front of the layout from left to right.

You are of correct about me needing two automatic reversing units, but not for where no reversing takes place.

By your post you accidentally managed to reveal one of the benefits of this plan. It's not over simplistic.

Caldermologist said:
This plan dates back to long before DCC was even thought of.
Click to expand...

Apart from flipping it, I have only added ...the tracks in each end to my next module and to staging.
Click to expand...

ONLY??? That is a HUGE change that can't be ignored. This is because the north exit to the staging is on what was intended to be a reversing section, and the entrance is the main. I am guessing that the wiring was designed including the staging as part of the main tracks which is the basic source of the problem.

If you try driving a train from staging to the factory, from the yard to the farm , from there to the passenger station (P), then the sawmill, and finally back to staging, without using the scissors crossover, you will notice that there is no need for reversing modules at all.
Click to expand...

No I don't. I cannot follow this route at all. From which staging are you starting? Do you mean going into the dead-end factory? If so as soon as the train leaves the factory and goes around clockwise to the farm it has reversed.

Here is how the layout was intended to be wired (according to an article I have) . The red figure-8 and the yellow figure-8 should be wired in parallel as the mains. Doing so will make adding the double crossover and all the issues you are trying to figure out go away. The blue and green are the reversing sections. Adding staging where it was is what has caused the problem. I think I would make the whole staging to be part of the green reversing. The "exits" to the other module are going to be a problem too since they each come off a different side of the primary figure-8. This could be fixed by connecting turnouts to the "exits" to the staging and other module to in different places on the "main". 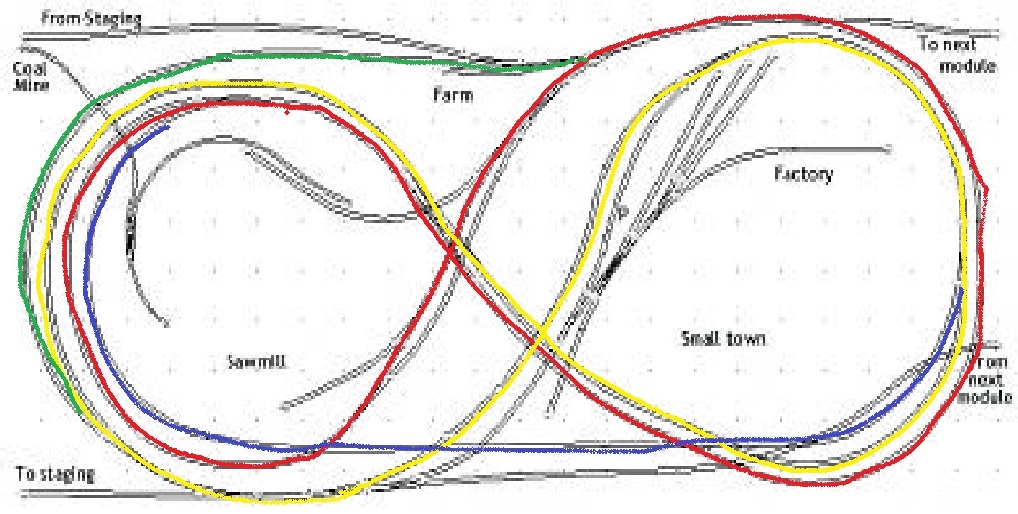 Ok, I puzzled over this dilemma (with the staging) over night and redrew as a twisted folded dog bone. The electrical block (in red) makes the two reversing sections part of the main (which I assume was the route you were trying to describe in your post above). Then I considered how to deal with the crossover. The proposed solution fixes the issues with the staging and the "other module". AND most importantly I THINK it solves the crossover issue. Basically make the green and yellow sections SEPARATE reversing units. I have never tried to run from one reversing section directly into another, but I see no reason it should not work. Both the green and yellow sections should be long enough. to prevent hitting the ends simultaneously. Amazingly enough the pink track is NOT a reversing section. And P.S. Sorry I didn't use the same colors as I did on the first diagram. 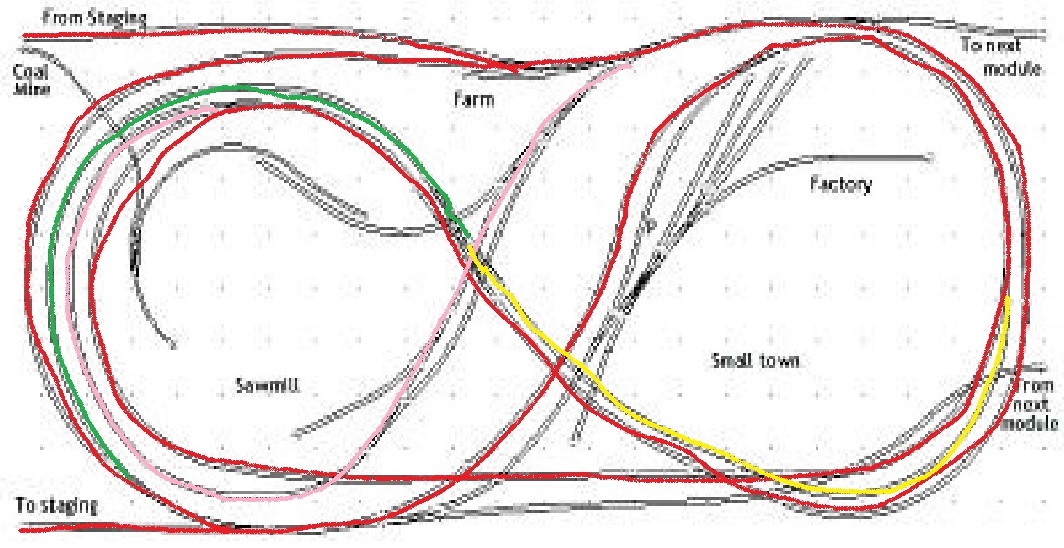 Your latest suggestion would have worked, if I had been using insulfrog switches, or points.

Since I'm not the yellow section has to terminate ahead of the crossings.

There is really no need to be able to perform the crossover with a whole train, so this will work anyway.

I've made this just to keep track of where I need to use insulating joiners, as a direct result of how I need to wire the turnouts. What does not show here is the obvious fact that the scissors crossover is insulated across its middle.

I could have managed with leaving one of the yard-tracks connected to the three-way turnout, if I could know that I would never want to leave a coach with it's lights on on that particular track.

However, building it like this means I will have to use auto-reversers at each end of all five reversing units, three of witch are the crossings. At €50 a piece that's quite an investment. I might install all the isolated joiners from the start, but let the scissors crossover act as just two parallell tracks to start with. That way I only need to get three auto-reversers to get started, both in running the trains and in getting familiar with how to use the auto-reversers.

Letting the trains run the opposite direction will make a switch engine needed on the west side of the river, serving the sawmill, coalmine, and farm. That, and adding a siding for it when not in use, would not be a problem at all.
Last edited by a moderator: Jul 25, 2013

Caldermologist said:
if I had been using insulfrog switches, or points.
Click to expand...

I don't understand why that should make any difference. Hot frogs just increase the number of gaps or insulated rail joiners that are required, they shouldn't change the master wiring scheme.

But you are right. Automatic reversing units make things much easier. You might want to start with some of the cheaper ones while "experimenting" and then move to the more sophisticated/expensive ones for the final solution you decide upon. Years ago I put one of the cheap ones into my layout on a wye. It has worked so well it is still there.
Last edited by a moderator: Jul 28, 2013
You must log in or register to reply here.
Share:
Facebook Twitter Reddit Pinterest Tumblr WhatsApp Email Link