Hi everyone. I thought I'd post an interesting idea I've been wanting to try for a while. That idea was to make an HO scale figure holding a working flashlight for some of our night shots we've been experimenting with. LGM and I visited a hobby shop in Columbia, SC last week, and amoung other things, purchased some Atlas unpainted figures. Using one of the figures, I drilled holes up one of the legs for a flexible .020" fiberoptic rod. The figure's right hand was removed. Next, details on the figure were changed such as the hat was rounded and the neck tie was removed (it was originally a police figure). I then painted the figure and ran the fiberoptic material thru the previously drilled holes. The end of the rod that would represent the flashlight was heated with a cigarette lighter and pressed against the workbench to form the flashlight bell reflector. I then painted the flashlight black and glued an appropriate hand from another figure in place for a natural looking hold on the flashlight. Under the layout is a 14v micro bulb in a piece of aluminum foil with the fiber optic rod situated to it's side to provide the illumination.

Whoa! Sorry for the huge pics. I'm used to my photohost automatically resizing them during the upload and these are posted at the photo gallery.

Here's a side shot with card stock added for clarity. 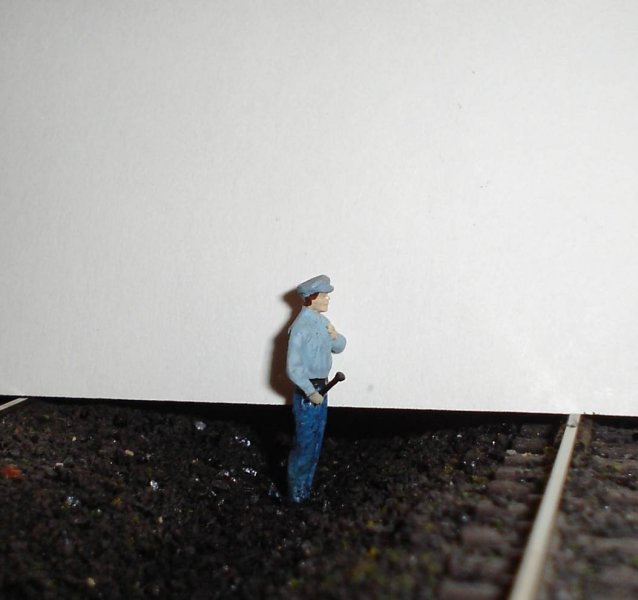 Now that is a GREAT idea Eric, top marks for that one
R

How about that! What a great idea, Eric.

Did he have to be hold his flashligh in that particular position?

SpaceMouse said:
Did he have to be hold his flashligh in that particular position?
Click to expand...

Aw gee, I can always count on you, Chip. Is there a particular way a flashlight is required to be held? As for Fred, remember, he's drilled with a .021" drill bit from two directions. There are limits to what one can route fiber optic strand thru...

Let's say the caption of that last picture could be, "Hey baby, wanna see my flashlight?"
N

Geeze how do you change the batteries?

SpaceMouse said:
Did he have to be hold his flashligh in that particular position?
Click to expand...

Eric, very, very nice work. Wow! There is no way my old hands would be steady enough to paint that model. The photo effect is great.

rhoward said:
Eric, very, very nice work. Wow! There is no way my old hands would be steady enough to paint that model. The photo effect is great.

Glad you liked the model. It's one of the few figures I've ever painted, and with the price of Woodland Scenics figures, won't be the last.
Last edited by a moderator: Jul 3, 2006

Agreed, that is one fantastic piece of work. I can't believe you pulled it off. Looks really nice in the night shot.
C

Yeah I can hear Fred's wife when he gets home!

"Honey is that your Flashlight, or are you just glad to see me!"

Eric, NOW THAT should be on Modelrailroadtips.com!!! Come on! Thats awsome, I'm gonna have to play with that idea.