PRR Modeler said:
Greg- That is true about Walthers.
Click to expand...

So everything is on back order and delayed for months... same as normal?

bob said:
So everything is on back order and delayed for months... same as normal?
Click to expand...

I get frustrated with Walthers they have this big book of nice pictures and that's about it. I call it a lot of nothing.

Good morning....Coffee,eggs, bacon,and hash browns this morning Flo.
Back to the train room always a project to do,starting to finish some stuff as parts come in.

CambriaArea51 said:
I get frustrated with Walthers they have this big book of nice pictures and that's about it. I call it a lot of nothing.

Good morning....Coffee,eggs, bacon,and hash browns this morning Flo.
Back to the train room always a project to do,starting to finish some stuff as parts come in.

And if you don't have that book with it's part/stock numbers, you have a heck of a search to find what you're looking for, but I guess that's the idea.

Good Morning Everyone. Clear and 46°. The rain yesterday never made it past a few sprinkles, it's in the forecast for five of the next ten days though, including tomorrow. I dug up and moved two more volunteer sapling trees yesterday to more optimal locations, so the upcoming rain will reduce the need for me to supply them with water, maybe! Took the day off from mowing just because. I have about another hour and a half of gas left in the tank before I have to deal with that.
Looks like I will have the opportunity to plant the tomato and pepper plants today, perfect weather, partly cloudy and little to no wind later this afternoon. I attacked the entire garden with the hoe yesterday to both eliminate weeds and prepare the planting area. Surprisingly no aches this morning. I should also get the row of green beans in today, and maybe some squash mounds. Everything in the garden is 7-10 days later than I usually do it this year, mainly due to untimely rain. Picked more spinach last night for salad, to go with that grilled rib-eye steak.

Eggs, bacon and hash browns like Tom is having sounds good to me this morning Flo. Give me OJ instead of coffee.

Making progress on the new laser-cut structure out in the train shed. Painted walls and windows then I added the trim early while it was still wet outside. 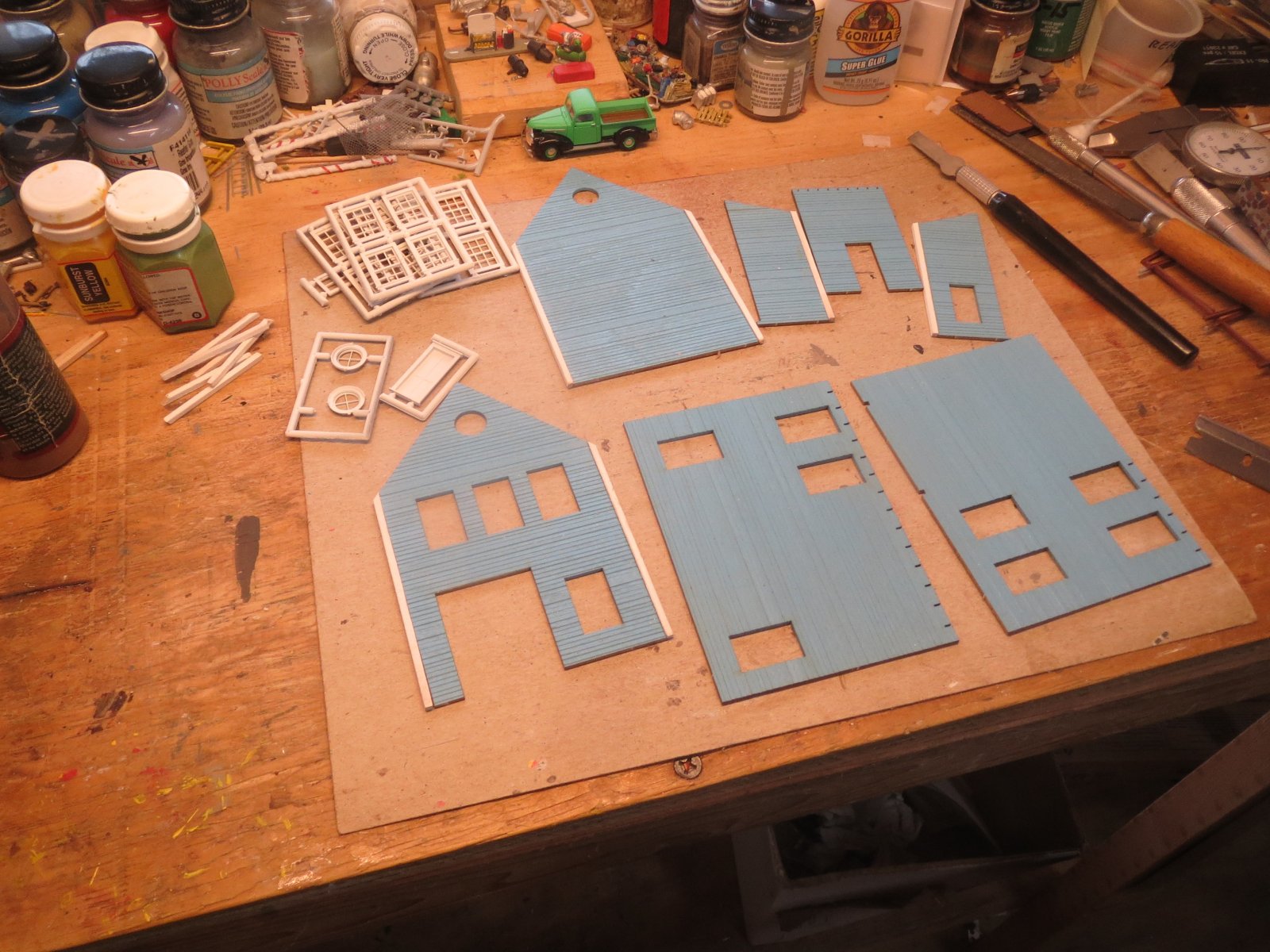 Then I added the windows, curtains (some) and one door. Even though the windows are plastic windows, it was a pain to get all of the clear styrene glued in place. Separate pieces for the upper and lower sashes. 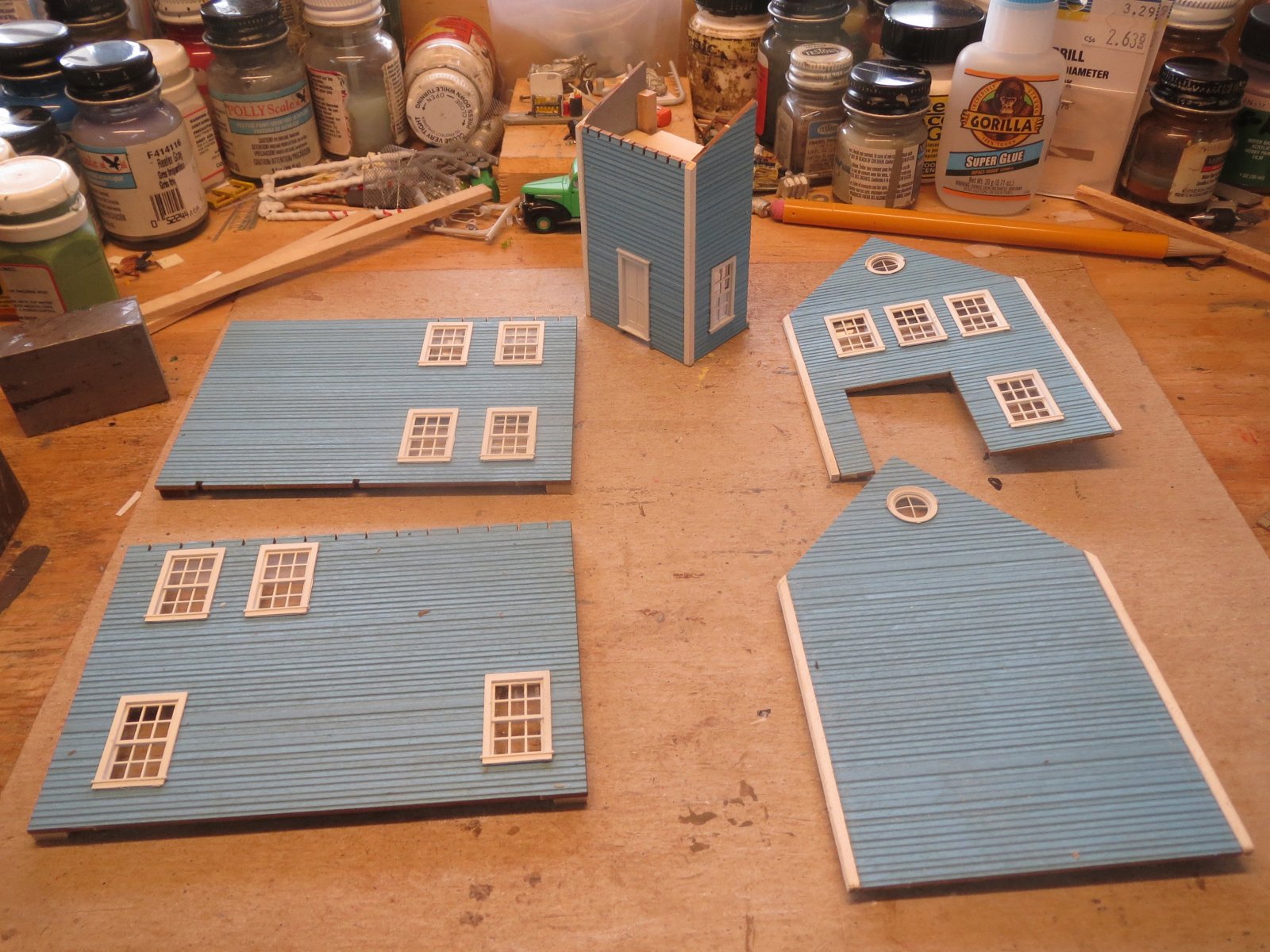 After assembly, I changed my mind about its orientation on the layout and removed the solid door which I will replace with a proper entry door. The side of the structure with the single door is now going to be the front instead of the loading dock side. 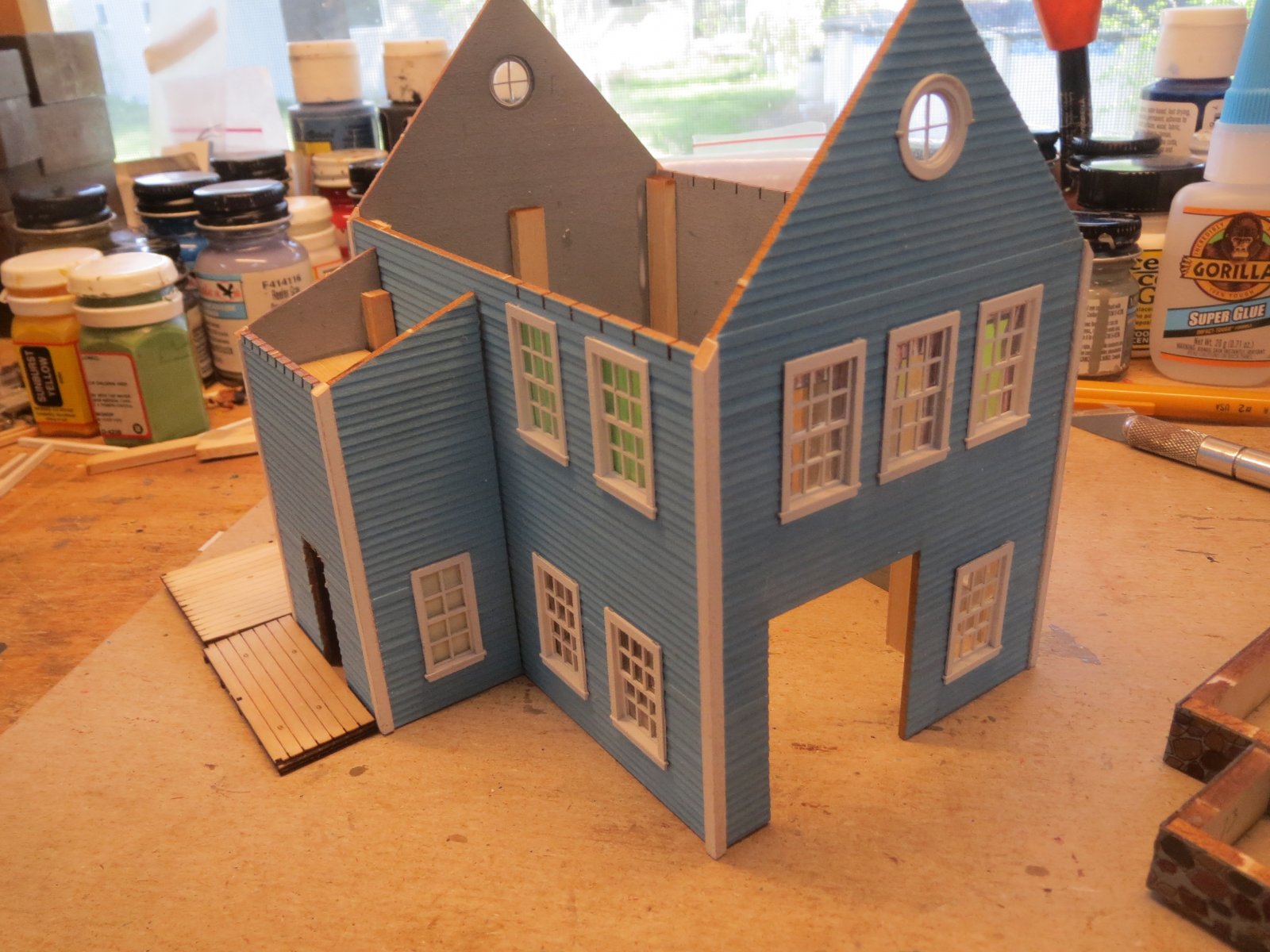 Structure perched on but not fastened to the foundation. 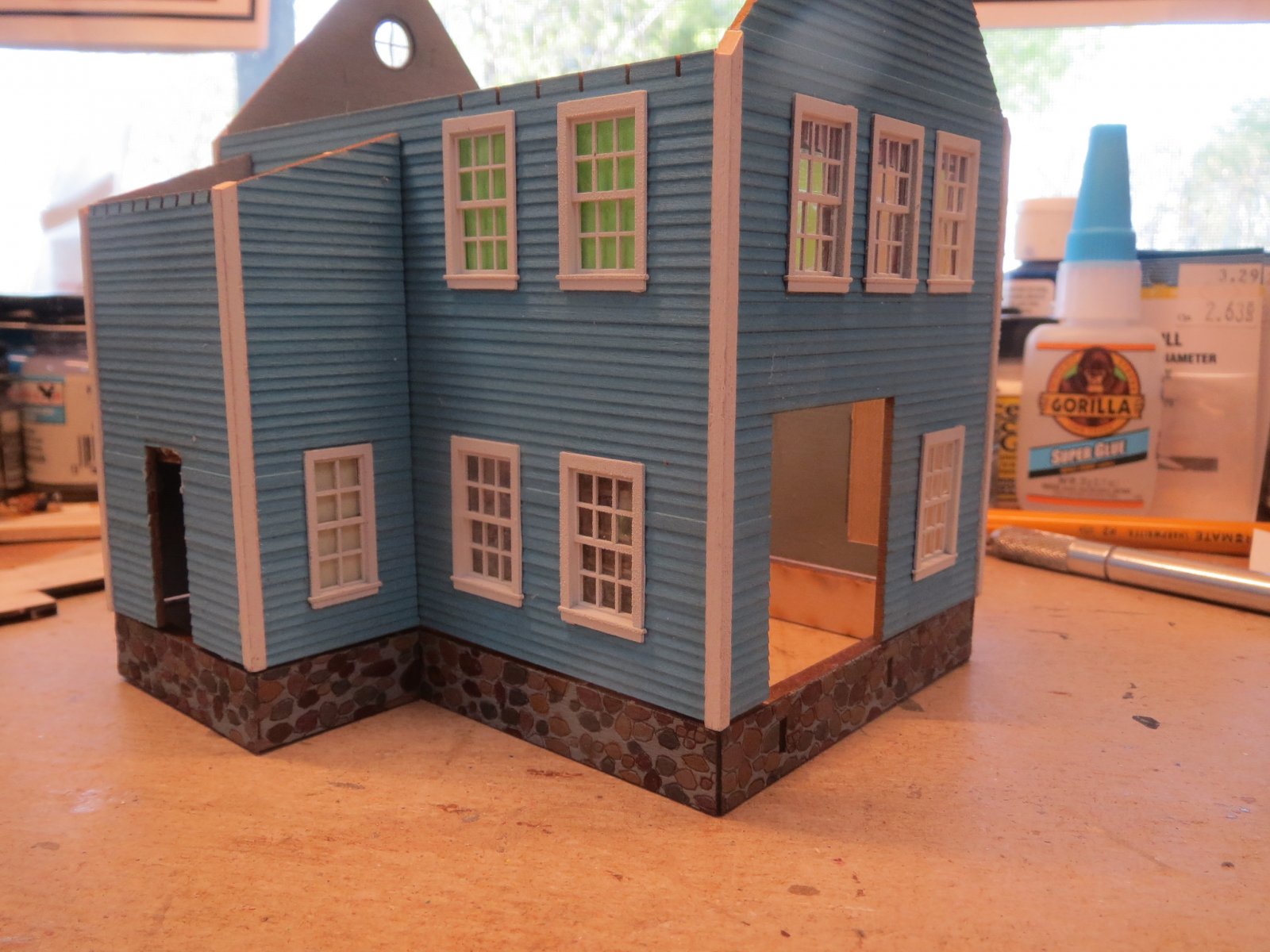 Note the notches in the tops of the walls for the "rafter tails". In this kit, they are individual pieces of stripwood instead of their more recent method of solid "forked" parts.
I plan to make a few other changes to the building that will better suit it's intended use as a retail business, more on that later.

George - Don't know about you, but I am beginning to dislike plumbing jobs. None of them are in convenient places and require me to stuff myself into a cabinet, under the house or dig a hole!
Sherrel - I saw a picture of a lady locally with 4-18 packs of TP in her cart. Give me a break! That's enough for my household for over three months. The caption indicated that it was all for her and she wasn't buying for family or friends. It's getting ridiculous out there in some places.
Curt - Really looking forward to see what you come up with as far as the layout is concerned.

Everybody have a good Sunday and keep your distance if you need to socialize.

tootnkumin said:
And if you don't have that book with it's part/stock numbers, you have a heck of a search to find what you're looking for, but I guess that's the idea.
Click to expand...

It used to be a catalogue, now it's called a reference.

Staff member
Good Morning Vietnam ..Troops!
Still, 41 degrees as I check this morning - going up to a whopping 63 with scattered clouds; maybe my solar will break even today! It has been running behind with all the rain and clouds we have had; it's supposed to be in the '70s tomorrow ... and '80s on Tuesday - YAY!

FLO - Good morning to you! Please give me what TOM and Willie are having - with coffee and OJ.

Willie - You sure don't let any grass grow under your feet? I am surprised that you have to mow?
That is really a nice kit you are working on ... The siding almost looks like individual boards in a couple photos there.
Better watch out though -- The paint jars and tools are crowding out the workspace?

Interesting tour of HD yesterday - They have roped off lanes with giant X's on the floor - almost like playing Hopscotch as a kid - to give each person a space. They were fairly busy so I got my batteries and left pretty darn quick!

If SWMBO will allow - I will get the smoke alarms all put back up today.
That is all for the moment.

Willie-The building is coming along very nicely. I do like that shade of blue, Did you spray paint it or use a brush?

Thanks to all for sharing their pictures and experiences during this period of social isolation. I am seeing signs of strain with some of my neighbors being house bound with small children. We, as a nation have a ways to go with the COVID 19 crisis, but this too shall pass.
Y'all have a blessed day!
Last edited: Mar 29, 2020

Yo:
Hope y'all had a good morning. Not much going on here. There are over 760 confirmed cases of Covid -19 in Monmouth County. Not good! 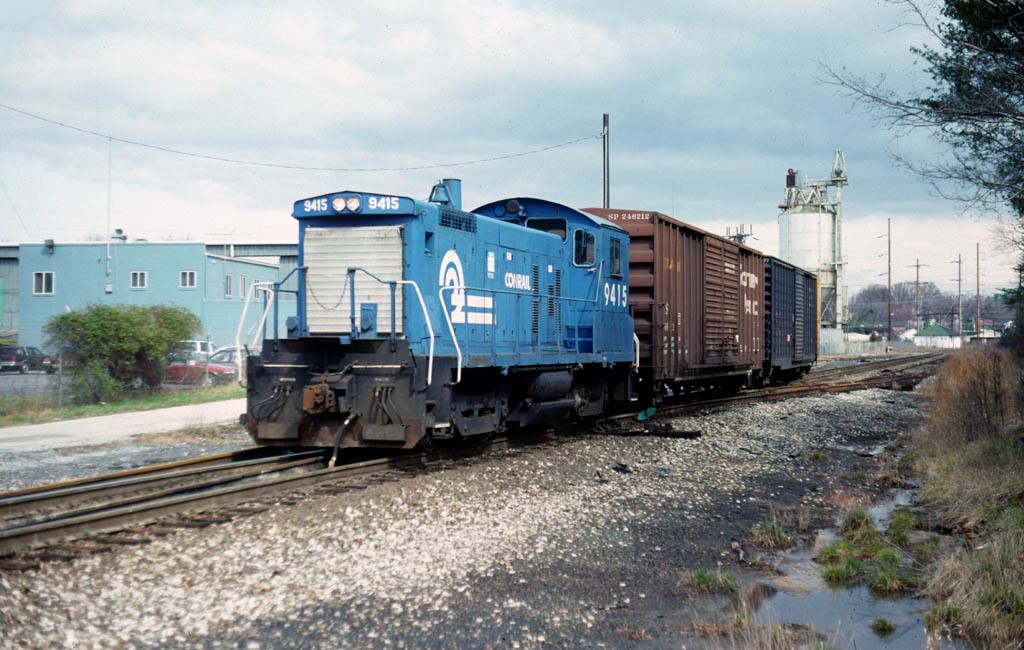 Just got back from the grocery store , and wow what a difference 9 days make. The Friday they announced the shelter in place noticed, it looked like a store going out of business. Today it looked like a regular everyday grocery store. They had plenty of bread, water, milk, eggs, and even had TP. Hopefully people have calmed down some, and realize it may take some time, but everything's going to be ok! They were even doing a pretty good job at social distancing.

Patrick said:
What I have a harder time with is the run on Guns and Ammo that the local gun and pawn shops are having. Even more so than TP. Are they going to kill the virus with a 9mm?
Click to expand...

No, it's other people they're worrying about. Just talked to my son in San Diego, and apparently they've had a couple of incidents where people are mugging other people in grocery store parking lots. Nothing like that around here, but population density probably plays a part in that sort of thing.

Good Morning All!
Need a coffee, as it is -10C cold again today. Plus, it's snowing aggressively. I stepped outside and took a photograph of my neighborhood, just in case those of you who are living with warmer weather don't believe snow is possible this time of year. Notice how void of activity the street is:

Nothing seems to be going on today, I'll tell ya! I can't even think of any hobby thing to get working on, right off the top. Twiddle my thumbs and stick my nose into a computer screen, I suppose.
Wish my Tichy supply order had come in. That would give me something to do, because it has a 6-pack of boxcar kits in it. The way things are, however, I'm even worried whether or not the mails are even going to get through.

Thanks for taking time to post the happenings in here, all those who do. Gives a fella something to read and often to chuckle at. There's a whole lot of advice and knowledge to learn from in here, as well.

Here's my train related photo for the day. A lumber loaded bulkhead flat, photo taken locally a few weeks ago: 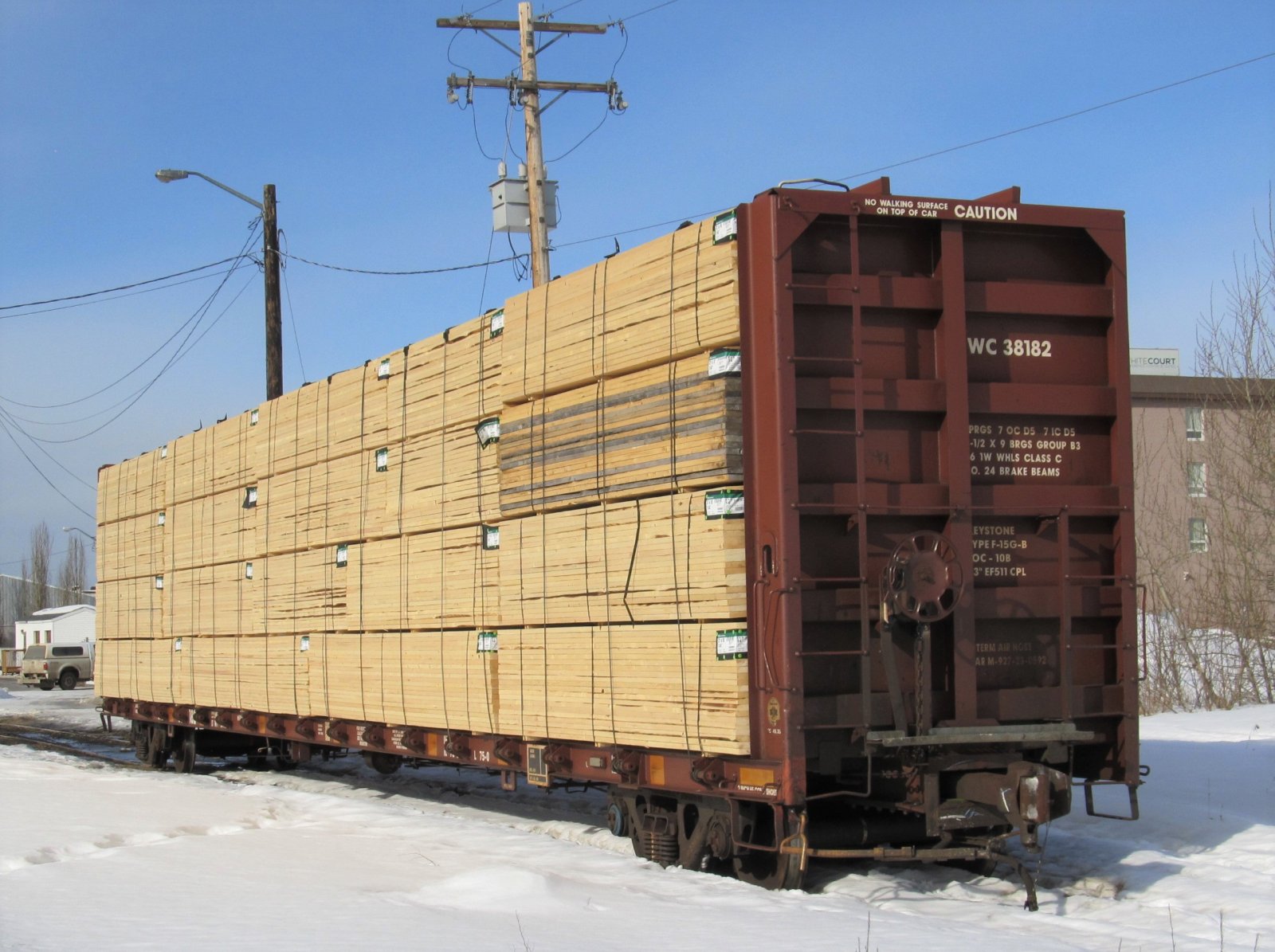 All Have a Great Sunday.
Guy

Still having problems with two Tortoise. When I operate a mini-toggle switch it operates a different Tortoise than it is supposed to do. I believe that when I cured the first problem, I created this one and the Tortoise are getting two sources, so I have to retrace the growing. At least I know the dwf signal lights work so the problem will just be a little tile consuming. I'll work on it tomorrow and take my time. Heck....... I have at least 26 days to work on this problem.

The real pain is where these Tortoise are located under the layout in an all impossible position to work.

Now to watch 1917 and then some other movie.

OK, gang, this is a bit of a downer. My mother died at 1:01 this morning. The hospital called us at 9:30 last night and we met my brother and his wife there at 10. They only let my brother and myself up to the room, so we sent the wives to bro's house. Afterward, the four of us sat around talking for an hour or so. When we got home, I couldn't sleep until about 7.

Some of you may wonder how an atheist deals with death. Well, we mourn our loss and then move on. The thought does occur that the last of our family's previous generation has died, and now it's our turn. Shrug. There's nothing I can do to halt the process and, having recently seen extreme old-age close-up in two instances, I wouldn't want to. One thing believers and nonbelievers have in common is that, for both, death can be a release.

Thanks for any thoughts, prayers and good wishes. I really like this bunch.

Sorry for your loss Beady.

My condolences Beady. It's time to celebrate and remember her life.

Cleaned the bird room this morning, carried the last sewing room box to the sewing room, so the train room only has train stuff in it! I ordered a kit from FOS scale kits on Friday and I'm calling B.T.S tomorrow to see if they are still shipping and if so I'm ordering the Mill Creek Coal and Tipple.

Tom- I think work is work anywhere you are, but at home I would have too many distractions.

Mike- Nice plan. I thought it looked like a large radius.

Joe- Thanks for the info. My FP7's are Tuscan but I use them for freight. Nice shifter.

Bob- Actually my Walthers backorder was only 2 weeks before shipping. This was my first order from them.

Beady- I am very sorry for your loss.

Staff member
Sorry for your loss, Beady and Family!

Sorry to hear of your loss Beady.
F

BEADY - Sorry to hear about your loss.