Sirfoldalot said:
ALAN --Looking forward to seeing one of your "stripped" pass cars?
Click to expand...

That would be striped Sherrel, as in the stripes are applied, not stripped as in the paint has been stripped off of them. I could show you some stripped ones though, as I'll be doing a few today...

Espeefan said:
I could show you some stripped ones though, as I'll be doing a few today..
Click to expand...

ALAN -- Throw a couple of stripped "girly photos" with the stripped cars too! LOL

The center pic is Black Eyed Susans. They have different size sunflowers from 3' to 8'.
Save yourself the consirversary and plant flowering bushes.

Staff member
SAY, TOOT ... Did you raise up your left leg at the strike of midnight?
That would get you started off in 2020 on the RIGHT FOOT!

Well, Willie, what I want to know about the flowers, seeing as there is a large area of what appears to be freshly dug dirt is, who's pushing up the daisies?

Thanks for all the pictures that have been posted. Enjoy seeing them and the huge amount of talent you folks have
Our clothes washer is on the fritz. What brand do you recommend? The one we have is a Kenmore and it's over 22 years old . Came with the house.

Thanks for the friendship sent on this forum. Thanks for the prayers when I and DEB needed them. We wish everyone and your families a HEALTHY and HAPPY NEW YEAR.
PHIL

Happy New Year to you too! We've had pretty good luck with Kenmore (Sears), but given the present state of Sears, I think our next washer and dryer will be Speed Queen. Our daughter got a new set about six months ago after going through a new set of Kenmore, then Samsung.

After nothing but problems with the previous brands, she told the dealer that sold her the Samsung set that she wanted the best ones she could get. He told her the best, hands down, was Speed Queen, but he didn't sell that brand. She was a little shocked but asked if he was serious and he said yes.

So, instead of buying locally, she went to Quincy to order a pair. Got them delivered about five days later and said she loves them. They aren't quite as stylish as the others, but they do look good and are built like a tank!

I think that's what we'll get when the time comes. Hopefully, they'll be the last we ever buy!

I spent 4 hours today wrapping structures (total of 6) and thought I was done with that part but I just realized I need to wrap the steel bridge and legs. The bridge has been disconnected and just needs wrapping. Probably nothing getting done tomorrow since the family is coming over for New Years.

Phil- Sorry to hear about the washer.

Alan- It's great that your son is getting involved.

Garry- I hope you are feeling better. Yes, it's coming down because of water damage to the wall and subfloor from a leaking roof. The roof is getting replaced on the 9th & 10th and most likely all the wood flooring (that we put in ourselves) on the second floor. We also have water damage in the framing at our back door. It's going to be a major repair job. 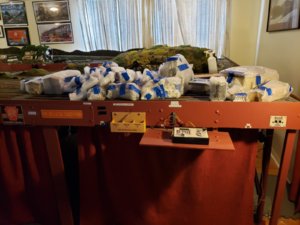 Happy New Year and I wish everyone the best in 2020.

santafewillie said:
Now that's the kind of sunflowers that I see. The plants that I made were not sunflowers.
Click to expand...

Sirfoldalot said:
SAY, TOOT ... Did you raise up your left leg at the strike of midnight?
That would get you started off in 2020 on the RIGHT FOOT!
Click to expand...

Staff member
LOL - Happened to cross tracks with this one today --
Sort of reminds me of something Beady would post?
If you ever wonder why the trains aren't on time! 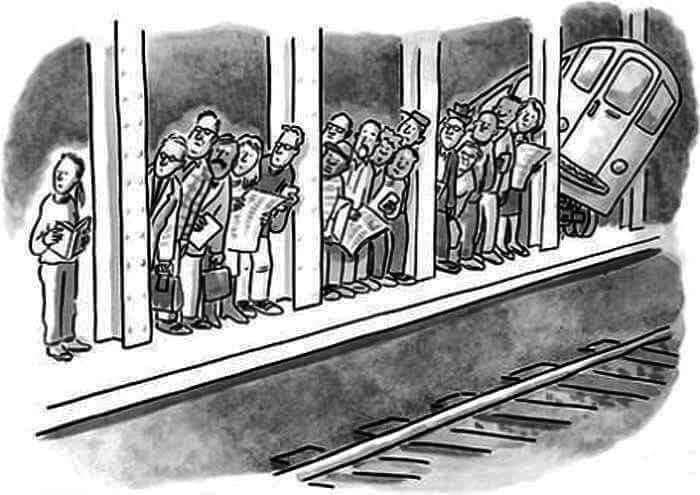 Interesting that the movie advertised on the street awning is "On the Beach", an 'end of the world' genre story, set largely here in Australia. I'm sure the 4000 residents and holiday makers, trapped in one of the seaside holiday towns on the southern east coast by the fires cutting all means of escape overnight, felt it was, when they were forced to flee to the beaches in the early hours. I believe this photo was taken about 9:30am. yesterday. 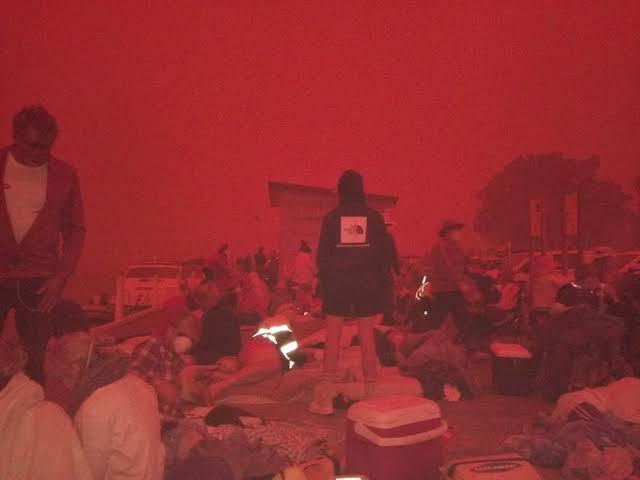 Figure it's time to check in again. It's been a few days. Went to my stomping grounds this past saturday for christmas day #2. Didnt get anymore railroad stuff. I did get some lowes gift cards. Nothing wrong with having a little spending money for tools. The rivet counters in one of the groups I'm in on the old facebook are celebrating a new athearn release. It doesn't really affect me much as I model more towards the C&O side of the chessie roads. However they are nice looking models. Well until I saw the price tag for them. I was rather floored!

Ever wonder why there aren't that many new faces to the hobby?

Burlington Bob said:
Well, Willie, what I want to know about the flowers, seeing as there is a large area of what appears to be freshly dug dirt is, who's pushing up the daisies?
Click to expand...

Thanks BOB . We have Lowes , the Depo near us also Wallywild. I thought Maytag made Kenmore

RAY- I remember the movie. Must have seen it 3 or 4 times. Funny what a window shade will do when attached to a Morse code key . Still know the code- could still send but would need practice DEcoding.
Phil

Flip said:
Thanks BOB . We have Lowes , the Depo near us also Wallywild. I thought Maytag made Kenmore

Years ago, a salesman a Sears told us that Whirlpool made most of the Kenmore line, but who knows now? We bought a Frigidaire stove about three months ago and the steel on it is so thin you can almost see through it!