Have two of the g'sons out this weekend. One had a soccer match this morning. Got beat 5-0. He will meet the girl who scored on him a couple times tomorrow at church. I suggested that he introduce himself and compliment her on her ability to play so well.

That is usually what happens on campus.

Another hot day today. The grand kids were picked up around 4:30 today. Once again I realized how spoiled they are. They wanted to get in our pool but decided it was too cold. Our pool has a solar heater on it. Back when I was a kid we had very little access to a pool so cold water didn't matter.

On my daughters issue. The principal and vice-principal bent over backwards Friday to make sure she had the help (medical) that they needed. I guess both of them want the kid gone but have been overruled by the district, based on this they want daughter to file assault charges (has not happened yet). I think daughter is waiting until a meeting Monday between the school, union rep, the mother, and probably district. I guess the school has tried to remove the student recently but it goes to a committee at district and that has to have a unanimous vote to remove a student and 1 person said no. More to follow.

Ken- That was a great photo. I actually had to really look to see if it was real or not. Do you have one or two overall pictures of your old layout?

Willie- I agree you have to pick your battles when you're married. Nice photos.

Sherrel- Thanks, I look forward to receiving it. All that story does is confirm that college students are so brainwashed that when they hear Trump's name their brain turns off and they salivate like Pavlov's dog.

I used to have an account until they started holding photos hostage for their upgrade charges. I do keep a back up on an external hard drive.

Sent from my SM-G950U using Tapatalk

Curt ... thanks for the update about your daughter’s situation. Prayers continue. Also thanks for commenting about my photos.

Willie ... Your link illustrates how naive and gullible many young people are.

Ken (VA) ... that’s good advice to your grandson . You are a very good grandfather.

Sirfoldalot said:
JOE - Who/Whom will it be?

Cubbies let me down - big time, but Dem Bums are HOT!
Click to expand...

Dem lovable Bums, over Houston, in 6. The Dodgers are as good as a team can be.It's 60 years now, an dem LA people don't understand why da team is called dem bums��
Last edited by a moderator: Oct 21, 2017

montanan said:
I used to have an account until they started holding photos hostage for their upgrade charges. I do keep a back up on an external hard drive.

Sent from my SM-G950U using Tapatalk
Click to expand...

I figured I'd leave mine there as an extra backup. Might as well use their bandwidth as a protest demonstration. Can't do what is the only thing I need it for, so leave it there to annoy them.

Good morning gang
It's clear and 50 here too!

Good Morning Folks. 59° and overcast this morning. Overnight thunderstorms left .75" in the rain gauge, never severe but noisy! High today is predicted to be 70°, which was the low yesterday until nightfall. For the week coming up, it will be 84° on Wednesday, but will drop to the upper 30's at night by Friday. Had an unexpectedly busy day yesterday in Dallas. My wife was going in to watch some games that my grandsons were playing in, and I went along. A double-header baseball game for the oldest and a single game for the younger one. Then lunch and nap at my daughters where I read that news story that I posted yesterday, then a soccer game for the youngest in the afternoon. Then on to the other daughters house to see my granddaughter and have drinks and BBQ supper. As a treat, I brought each of my SIL's a twelve pack of Yeungling beer that's not available in Texas. They both originate from the Pennsylvania area and yearn for it. I picked it up during the vacation as it is now sold in Louisiana. The only downside is that I was within five miles of Discount Model Railroads and I couldn't break away for a spending spree...grandkids take priority in my life.
Didn't make it to the train shed yesterday due to the above activity.

Garry - I haven't made it to the Frisco TX museum yet. I had seen it numerous times when it was still located in Dallas before the "Great Move". I also got to see some of the equipment riding by my then place of employment on the BNSF tracks that ran alongside. Some pieces rode on flatcars but a few pieces were just towed through. The "Big Boy" move was quite impressive and it took two weekend days to travel 30 miles. From what I can tell, they are not completely finished yet and access is still limited. They are not allowing "self-guided" tours yet. For that reason, I am waiting for everything to settle down first. Some of the more impressive pieces of equipment besides the "Big Boy", an FP45 diesel and an M-160 Motorcar (Doodlebug), which actually moved under it's own power. Somewhere I have pictures of it on a siding about a mile from where I worked at the time. I will repost some of them when I locate them.
Curt - It sounds like your daughter's issue with the student is on track to being resolved. Encouraging that they appear to back her up in the filing of charges.

Today's pictures were taken at the "HO" model railroad layout located at the Mississippi Agriculture & Forestry Museum in Jackson MS. I posted some from this museum last year. 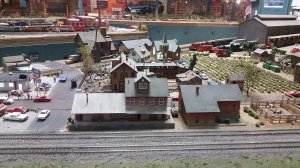 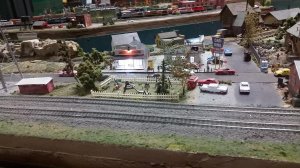 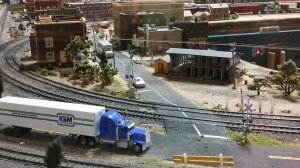 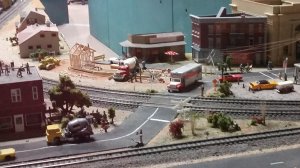 Visitors to this museum display can operate the trains by pushing a button on the fascia. They then make a couple of laps and park themselves. Pictures are a bit harder to take due to reflections off the 6' high plexiglass wall surrounding the layout.

Everybody have a great day.

Willie ..... The photos of the Jackson, MS layout look very nice . I see they have included the common Atlas lumber yard.

Here is my Atlas lumber yard between other buildings. I modified the lumber yard somewhat, but it is obviously the Atlas model.

Staff member
Actually Garry, I thought it was the Walthers one

Staff member
Morning Chaps: Getting HOT out here again! Supposed to be 97 today and into triple digits tomorrow for a few days.

An enjoyment photo (if it will post?) NOPE - I give up!

JOE Don't count the Astros out too soon.
That game last evening ranks up there with one of the best I have seen! I'm going with Houston for 7!

Staff member
Willie Those pics from the museum in Jackson really shows some excellent modeling! Right up there withn some of the guys on this forum. I thought the last photo of the "roofers" and the construction framework for a "new" buildimg were fantastic.

Just too many details to name them all - just really great modeling - in my book.

Garry -your photos and modeling are nothing short of phenomenal!

Good morning. Warm, 52 degrees, but the wind is howling outside. Livingston, MT is known as one of the windiest places in the state. A 40 mph wind is considered a breeze. It's not uncommon to have winds 60 mph and above. The interstate sometimes is closed due to high winds and detoured through town. It was a bear trying to stay on the highway on the way home from the club last night.

Willie - Those are some really nice photos. The details are excellent.

Joe - I am no longer a big baseball fan, but I am pulling for the Dodgers. Nice that Tommy was in the stands for the win.

Garry - That lumber yard has got to be one of the better kits that Atlas put out. I combined mine with a farm supply and John Deere dealership and scratch build a loading dock extending behind both structures. Also cut scale lumber to size for the building. 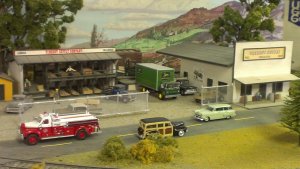 Had a busy night at the club last night. Not a lot of visitors, but a lot of action. Took a few photos but even after reducing the size and resolution the photos would not upload to the forum. BUMMER. Don't know what's going on. Some I can upload and some won't.

I did manage to get all of the handrails installed on the F-3 and now all that need to be done is to paint the rails and touch up some paint.

JOE Don't count the Astros out too soon...I'm going with Houston for 7!
Click to expand...

Sherrel and Chet: I'm going to go with dem Bums in six. It's a New York thing, more than anything else.

Today is another pleasant day, with highs in the low 70s.

Dug out a few DC locos from storage. All Athearn, and all Reading. The RTR F7s are recent, but identical to the Globe BB f7s, but with single headlight. Needs hand rails, grab irons, lift rings, better headlight and cab windows, and closer coupling. They run nicely, and "quietly". Two as are powered, the B is along for the ride. The RS-3, well, it needs new gears and couplers. This is something doable.
M

Posting this here as most folks read this topic. Please read this message if you are having trouble uploading images, or want to upload more than one image per post:

Let me know if you have any questions. 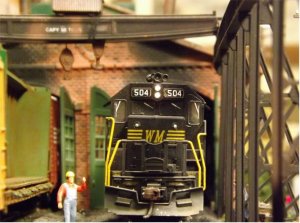