Here's a few tips regarding painting. I have a lot of structures and remembering what colors I used would be impossible. So I write down the colors on the model's instruction sheet and file it away in a file cabinet in the train shed. Useful when touching up is needed or when another forum member asks what color I used after I post a picture months or years later.
The second tip is regarding oil-based paints. I use an orange high-liter to highlight the name of the color on the bottle to remind me to use thinner to clean the brush instead of water.
Lastly, I use a lot of unpainted figures and keep a handful at the workbench and paint a little every time I have a bottle of paint open for other things.

santafewillie said:
I do the same but I still end up with leftover parts when I think that I am finished.
Click to expand...

I've always heard its a sign of a good mechanic if you have parts left over, and it still runs....
B

I have used FELS-NAPHTHA Soap after cleaning out paint brushes after they have been sitting in paint thinner / turpentine for a few hours. I am not sure if the newer version would work equally well. 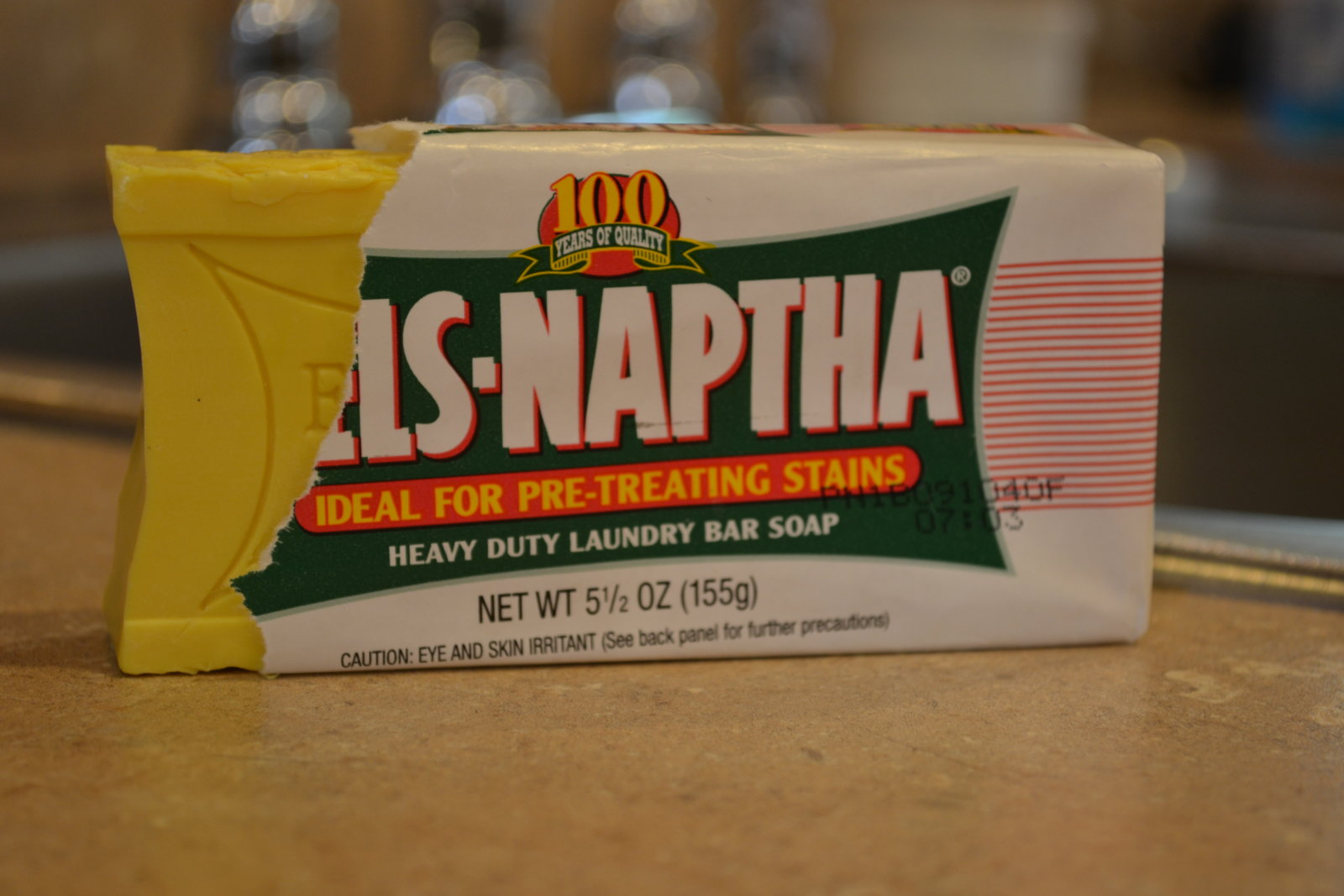 Here are my tips
1. Try to develop some kind of focus, be it a fictional or real shortline, mainline ect. Doing the "shotgun" approach of just buying anything and everything you like, can make it hard to build a layout. Such has having lots of eastern railroad motive power but you want to model the desert southwest.
2. If you are enticed with brass models(talking about motive power not rolling stock) make sure to discuss any model with a seasoned brass person before you drop the $$. As most all importers/builders had duds and one bad experience can spoil the whole thing. Brass can and many do run really well.
3. Take a hard look at the "less = more" approach. For example, instead of a fleet of diesels(or steamers) and modeling a class one railroad. Go with a couple really nice models such as brass or the rivet counter series from Scale Trains and model a small shortline. By keeping layout size smaller and less motive power. One can maximize funds into really nice models and super detailing the layout. Where as a much larger layout can quickly become overwhelming, leading to burnout or more arm chair railroading instead of layout building and running trains.
4. Get the mainline up and running as soon as possible. The ability to run trains will help keep motivation to do more high. I always enjoyed having a short freight running while working on my layouts. You can always go back and "cut in" turnouts and such if need be.
5. And finally, as you start building, allow your layout and theme to evolve. I planned to/started to model the NYS&W Utica branch, bought engines to suit, but as i started to pick up buildings that I liked, my plan has more evolved into a grain hauling shortline(much line the one I railfanned in my teens). Unsure what I will do with the pair of NYS&W Alcos just yet as I still like them. I maybe able to do a "dual theme" line by carefully selecting the areas on the NYS&W that I model as a few pics I have found look much like where I live in Indiana vs New York state were that line is. Mike Aspie.
B

One of my tricks with those Clear Plastic JEWEL CASES which are cracked, broken. I use clear packing tape many times to repair jewel cases, make sure the tape is TIGHT as one can get it to wrap around both parts outside as to place the cut ends on the inside of the Jewel Case ..all the way down the side inside only! After that one can insert the Plastic Cradle or Foam Padding.

I use a printed out 8 1/2 x11 sheet of paper with my Railway Initials on it in white with a colored background , I then cut and ELMERS GLUE the printed patch to the area, if I am not in a hurry I use whatever paint color I have on hand after masking around the selected area of course the paint has to be Flat, I use a artists paint brush for such after area is dry I either use Decals , Dry transfers.

3- For Non working ditch light I use Clear Plastic Sprue’s attaching them with a TesTors glue. Yes, those Old little orange tubes of glue or the blue tubes which possibly clam to be non toxic.

Airslide said:
sawdust for ground cover. i got 2 big garbage bags of it from home depot, for free. it was pretty messy to die it green (i probably wasnt doing it right) but it came out ok. then i tore down my layout and wont be building another one for quite some time - so i threw the excess out...but its definitly a good filler, especially if you have a large layout.

also, tyco and life like "toys" are good for practicing weathering. i find them at just about any yard sale for extra cheap.
Click to expand...

I have done the same technique for years. The possible error I have found was to DYE or WASH the sawdust.
PVA your surface. Apply the sawdust in it's natural color. Spray paint with desired primer and top coat colors. Finish off with diluted and tinted Mod-Podge with an application of Wet-Water.
If you wish to get an undercoat of ground color make some ground goop with a combination of sterile sifted sand, & tinted/diluted Mod-Podge. Don't forget to Wet-Water the surface first. Believe me I haven't...I've failed.
Jim
M

TOOTH PICKS. Uncouple cars with toothpicks instead of skewers. Skewers are large and lots of time must be put back in a holder. Toothpicks allow you to get your hand close to the car roof giving better leverage. Their sharp point goes into the knuckles very easy. And you can leave them here and there near spurs or yards. You could stain them, too. Very unobtrusive to the scene...

I haven't seen this one in the thread yet, and I'm not sure where I read it, but I needed some corrugated roofing material for my project.

Take heavy-duty aluminum foil, cut it to size and then put it on top of an old computer ribbon cable. Rub the foil into the grooves in the cable with your finger and blammo - instant corrugated steel panel. I'll have some photos in my build thread in a few days when I get the panels attached and painted.

Contact Cement: I use cheap, a dollar a tube, contact cement for attaching scenery like ground foam foliage clusters to slopes. I used to use GOO from Walther's, but that is an expensive product and the cheap contact cement can be found at Dollar stores and be used for many hobby uses.

Culverts: I make culverts by wrapping aluminum foil around the threads of a bolt and then unscrewing the foil and there is an instant culvert. Paint or weather the culvert after cutting to length.

Paint Mixing Trays: I use the plastic containers used for the mix snacks of cheese and nuts or individual packs of olives to mix oil paints or hold small amounts of thinner.

I will also ad, avoid the plastic geared logging engines other than the AHM/Rivarossi Heisler if you want to opearate them long term. Save your $$ and buy a vintage PFM/United or NWSL brass one. The drives are nearly bulletproof, can motoring if you wish is fairly simple. Many operate just fine once cleaned and relubricated. It does take some time for the drive to loosen up as the old oil leaves a varnish on the shaft that needs to wear away. Here is my vintage NWSL Willamette Shay with its top removed, 3 screws is all it takes to access the drive for service. Genuine USA made Pittmann DC66 powered.

Having arthritis and increasing over the years, it became harder to work with hobby knives. Especially the #1 & #2 knives.
My upgrade is to make the handle larger in diameter. On the #2 knife, I used 3/8" fuel line hose. On the #1's, I used 7/16" and ½" dowel rod. I cut the rod into 2 and 4 pieces, which made it easier to drill down through the center.

Here are four suppliers that I have been buying from for over 20 years. Quick service, good prices and have never had a problem with any of them.

Micro Fasteners • their name says it all. If they don't have it, they'll try to find it for you.
https://www.microfasteners.com/

Cjcrescent (Above) The black on the code 83 Atlas CustomLine frogs is paint or ink or such..and it rubs off easily, revealing a metal frog..
I have never in many decades had a stall out due to a high frog surface. Filing them down is chancing that wheels will drop down there.
Atlas frogs have a little part that sticks out at their bottom..This is where one can enter a screw to wire up the frog (common polarity) essentially making the all live switch into a power routing switch which is sometimes needed in certain track situations and at the same time turns a cold frog into a powered frog = more wheel-pickup coverage...Code 100 frogs are plastic; or at least were, last time I saw one...
Making guard-rail channels narrower is potentially not going to jibe with certain wheel flange thicknesses. Some will get stuck in there.
Far as the rivets go, you can put powdered graphite under them. Pretty sure it conducts electricity...
Finally. You can make the switches look better by painting the 4 black insulators around the frog with chrome enamel paint. It doesn't wear away.
Last edited by a moderator: Mar 26, 2020
M

My tip is, so it's not hidden (in above post): If your switches have 4 insulators around their frog, paint the four with 'chrome' enamel paint...
Makes them look a bit more realistic..And the paint doesn't wear away..
Other tip is: wood toothpicks work well to uncouple cars..And they lend a better leverage, your hand being closer to the cars. Plus you can leave one or two near the switches so you don't have to carry them around like skewers need..They're very unobtrusive too; especially if you stain them...

A tool tip from my American Flyer S gauge bench. I have re-purposed the old style battery terminal pullers, ( e-Bay ), for use a wheel pullers for both steamers and diesels.
The center screw has the end bell removed and then the threaded shaft is removed and ground to just smaller than the axle size. The ends of the pullers are ground some what flat to fit behind the wheels. Line it up and tighten the screw slowly. Before and after pictures are below.

Re-installing the wheel is another chat for sure. 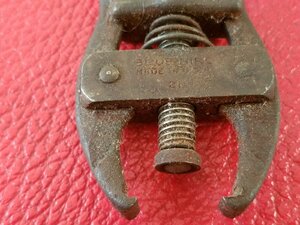 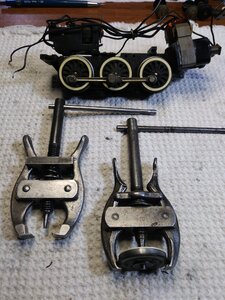 Use sheets like this to these cut to size for replacing the Factory ones .. ATLAS / KATO, ATLAS, KATO please see second photo. I fount them at walmart back in the craft , fabric section they also come in different colors as well. 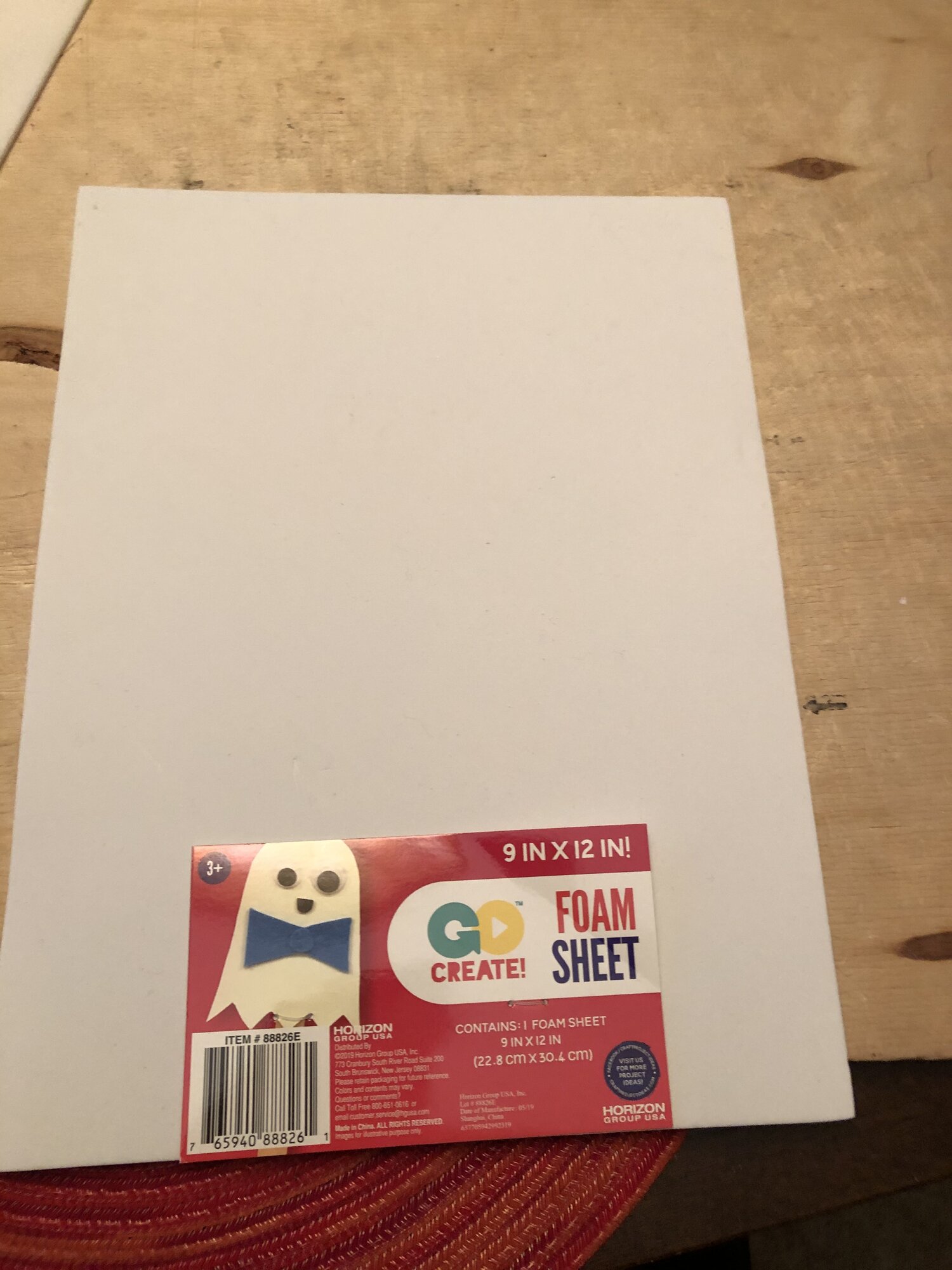 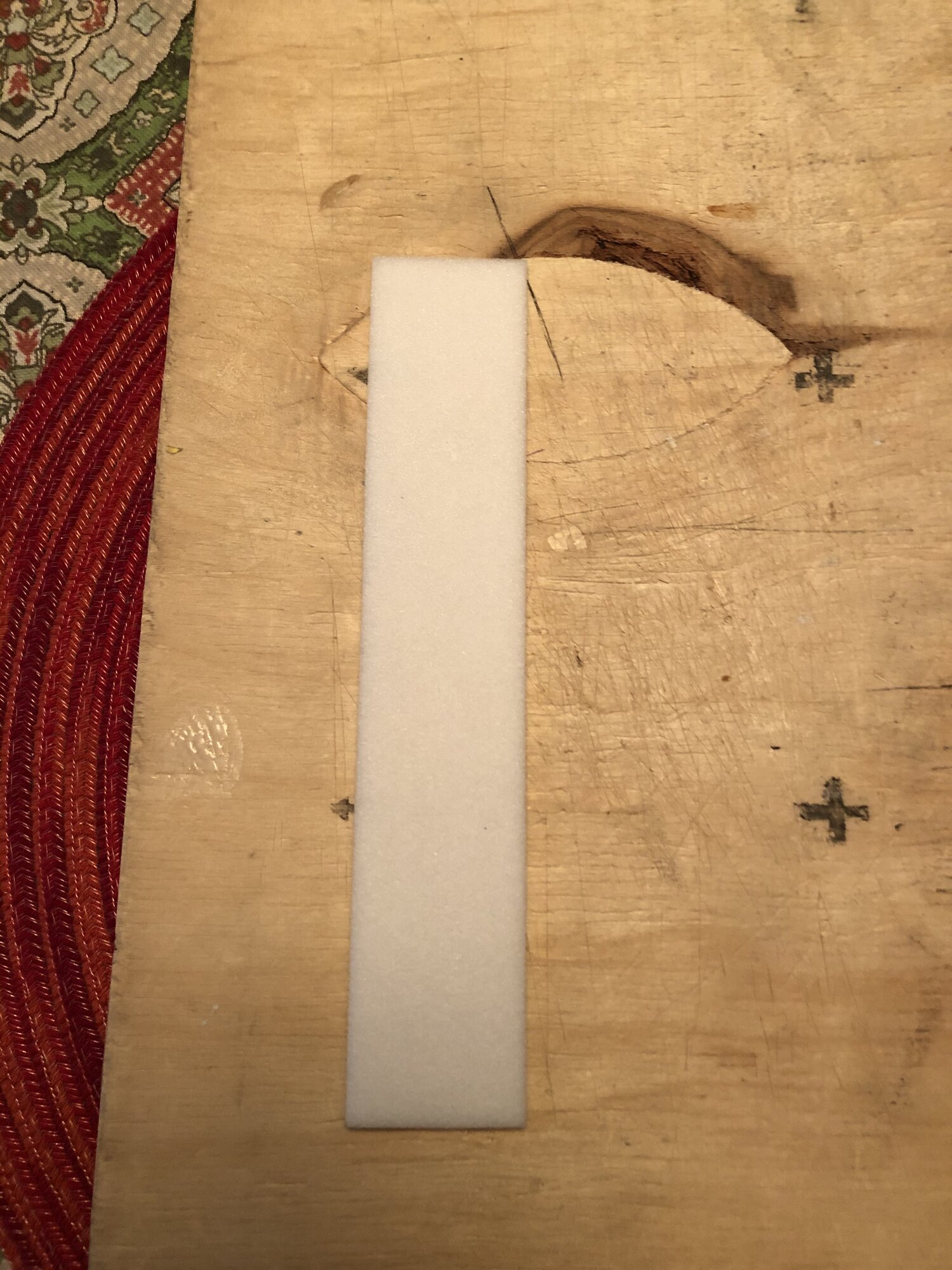 When I started assembling Ambroid kits, it took me all of 10-15 seconds to get fed up with the instruction sheet laying on the clutter of the work bench. So, in about 15 minutes, I came up with this. 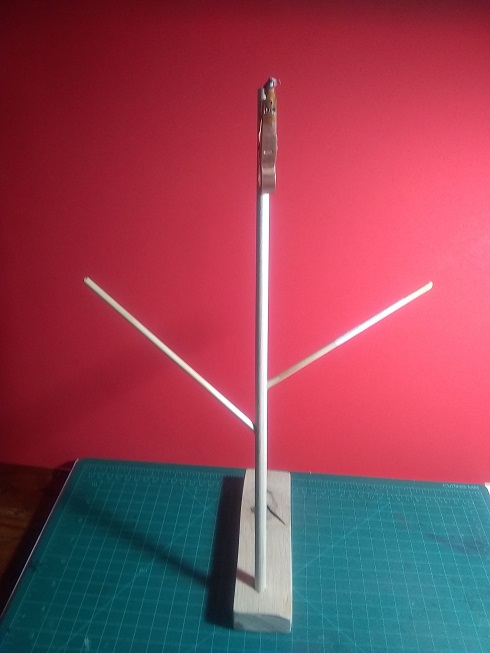 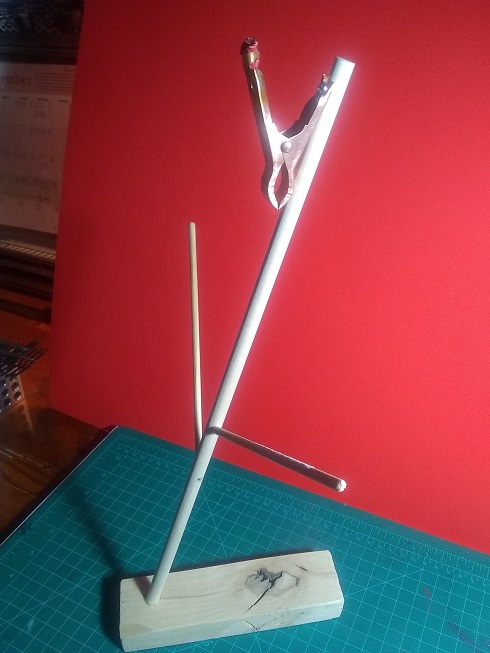 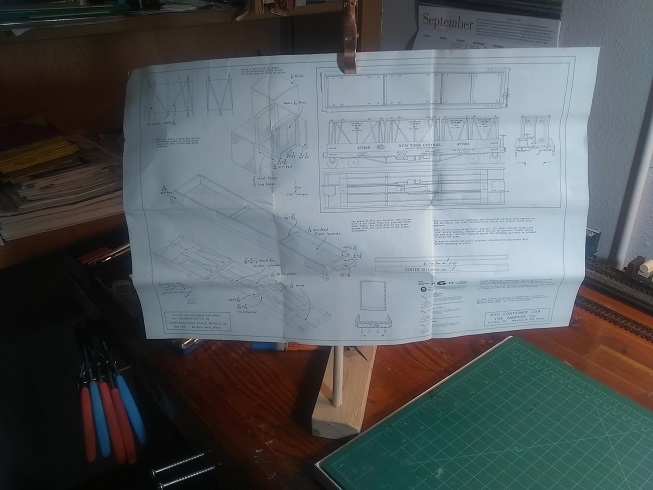