I picked up a Bachmann On30 2-6-0 this weekend at a local swap meet. I was surprised how nice it looked, lots of detail and the size is a nice compromise between the heft of O scale and the compactness of HO.

Anyone else here modeling in 0n30? I seem to recall somebody posted a link to an On30 layout a while back. Also, where's the best place to buy the stuff? The selection seemed pretty small at the loco hobby shop and even at the train show there was only one dealer with any and he had just a few boxes.

I dabble in it a little bit. But most of my stuff is pre-painted with Disney scenes. I know Shamus Has a fairly significant On30 layout. the LHS I deal with will order me stuff, but I haven't had any time.
M

grumpybob said:
I dabble in it a little bit. But most of my stuff is pre-painted with Disney scenes. I know Shamus Has a fairly significant On30 layout. the LHS I deal with will order me stuff, but I haven't had any time.
Click to expand...

Sounds a bit like why I bought mine, I like the looks of the loco and it will go well with the wife's Dept 56 type stuff at Christmas.

As for Shamus' layout, I didn't realize it was 0n30, even though he clearly says so. Since it seems more serious and to scale than most On30 stuff. (as an example the GN engine I bought was painted nicely, but the cars were in a bright GN green and orange scheme which just looks like it was a lot more suited to steel cars than old open end wood side coaches.)

Since his layout is more to scale and accurate looking, I just thought it was On3 instead of On30. Guess I should read the descripions...
M

Yes, I know, I've got a whole layout full of it in the garage, and the hobby store sells it by the 3 foot sections called "Atlas HO Flex Track".

But I seem to recall somebody made some with ties and tie spacing scaled appropiately for On30, rather than just being typical HO track?

The Peco track isn't really On30 track, it is 7mm-16.5 track . It represents 7mm industrial tramway track and it is very clunky . The ties are almost a scale 10" wide. I am using Atlas HO Code 100 track on the project layout we are building on our website.

It makes a visually acceptable On30 track. Pre-WW1 track was usually 6x6's x six feet long on 18 inch centers. The Atlas code 100 is six inches wide and 4-1/2 feet long on 15 inch centers. I have had people ask me what type track I use because it looks different under the O scale equipment.
Just a thought
Harold

modelbob said:
Ok, so next question... Where do I get On30 track?

Yes, I know, I've got a whole layout full of it in the garage, and the hobby store sells it by the 3 foot sections called "Atlas HO Flex Track".

But I seem to recall somebody made some with ties and tie spacing scaled appropiately for On30, rather than just being typical HO track?
Click to expand...

My trackwork is all Peco 0-16.5 and when ballasted and weathered, looks okay to me.

Shamus,
The PECO on your logging layout looks wonderful. It just doesn't look right when used as pre-WW1 mainline track. The ties are too few and too wide, it doesn't give the impression of the pictures taken during that time frame. I have an easier time living with the too short ties.
Just my opinion
Harold
T

The best place for information on On30[ On30conspiracy@yahoogroups.com ].
I had the On30 module pics....I am part of a group of DFW are on30 modules..you can find our little hang out on the net at [ ocmodsTexas@yahoogroups.com ].
Now why is On30 getting so big? IT'S FUN !!!!!!!!!

Actually the best On30 forum is at:

It is small but it is in a better format than Yahoo. Also it has a more diverse range of people passing through.

I too use the PECO track,it at least looks like narrowgauge track.
G

While Peco has been mentioned, I kind of like how the Micro Engineering On30 track looks. I'd post a shot of it, but I don't have any handy at the moment. I think the ME track would look good for Sn42" gauge track too. New Zealand has some neat stuff running still and I like their current electric engines.

Here is an example of narrow gauge track from: 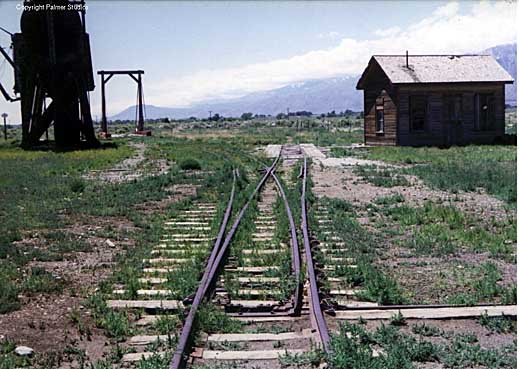 Notice even in the death throes of it's existence, the ties are evenly spaced neat and about a tie apart. The right edge is even, no skewed ties. No track gang worth it's salt has uneven ties and skewed ties. I think that the Atlas track gives this look better than ME or PECO.
Just a thought
Harold
B

I keep thinking that I need to add a railroad to my mom's Dicken's Village setup.... On30 was practically designed for that.
B