Hi all,
I am new to the forum, and just come back to N gauge modelling after a large number of years away. I am UK-based, but have a keen interest in the modern day US railroads. Appreciate that may not appeal to everyone, but does to me! I am fortunate in having an area which is around 21 foot x 11 foot for a layout that can portray long freights running at realistic, not slow, but steady speeds. The area is currently being cleared of rubbish etc, but I am hopeful of getting some track (especially in the hidden sidings) down by Christmas.

The idea is to portray a three different kinda of scenes across what should be around 100foot of scenic running space. Each scene will be separated by a scenic break in some way. The first being something of a canyon area, with the railroad hugging the rock face, which drops down to the river below, another will be a decent sized classification and switching yard, and the third I am looking for a bit of help with. A couple of 'must-haves' are a switching industry, grade crossing for road traffic, and some form of busy town scene. Can anyone offer any suggestions of suitable industries or prototype locations that could work? I am currently thinking that some kind of scene with a couple of warehouses, and box car deliveries could be the option.

With a very keen interest in keeping my feet on the ground, I don't like much more than a few foot distance between them and the ground, flying is something of a no-no so ever getting over to the US to see these things for real is unlikely! But through the modern day world of webcams I am able to keep a finger on the pulse so to speak. I do tend to have the Barstow or Tehachapi webcams on in my home office whenever possible, so train consists and power will follow a similar theme - mainly UP and BNSF, with 'hired' power from KCS, NS, CN, CP and CSX making the occasional appearance.

I am lucky in that the area available can be used almost entirely for scenic modelling, with the hidden storage sidings being located on a lower level. The eventual aim is to have fun operating it, perhaps introduce a small amount of computer control (being Digitrax DCC that shouldn't be too difficult) and be able to both switch cars while at other times just enjoy the trains passing by.

I would welcome any views and comments. I'm happy to share the layout, so if there's any interest, I will post pictures and updates as things progress.

Hi. I have one thing you might like: On YouTube go to "DJ's Trains". He's a real, now working, engineer. He has fantastic videos from his drone over real in-use, contemporary, US trackage and explains what you're seeing / is being carried out...He's also an HOer... M, Los Angeles

@MHinLA Thanks for the heads up, a fascinating YouTube channel, that I shall watch more on, but that has given me a few ideas!

What do people recommend as the steepest grade to use in N gauge with modern day trains? US model railroading has an advantage over UK railways as it is rare to see more than one locomotive on the front of a train, so in many respects, the grade with a longer train, gives a purpose to having multiple locos up front! Although the grade will not be visible on the scenic area, I don't want to over step it, so any comments from N gauge modellers would be welcome, in addition to the switching industry query above.

Far as maximum grade, the scale, N, HO, OO, S, O, makes no diff... Ideally no more than 2.5 or even 3% is the norm. Obviously the lower the grade the better. 100 ft rising 1 foot is a 1 % grade. 100 inches rising 1 inch is a 1% grade..50 inches rising 1 inch is a 2% grade.. 50" rising 2" is a 4% grade, no matter what scale. Do note that if the grade also curves, the curve adds drag to the train; the train now behaving as if it's climbing a steeper grade. If the train is only an engine and say, 4 cars, it wouldn't matter.. An engine pulling 20 cars up a curved grade will likely start slipping. BUT ! This situ gives you an excuse to add more power up front (on the point) from the get go, or having a pusher joining in at the rear to get the train up the hill....

Hi guys,
Sorry for the radio silence. I decided to go with a small layout to start with to practice some scenery and the like, still keeping the Canyon theme.

Operationally, its very simple and possibly unexciting, but it will allow practice and some trains to run. So, this is Rock Creek Canyon in N gauge. Using a couple of baseboards built for a small project previously, but never used, the scenic area is 6ft x 18inches, and the route will represent a single track main line running through a deep canyon, alongside a river.

Entering the scene from the left, will be the main track and siding (the US term for a loop). This will then come into a single track, shortly before the end if the first board, before swinging away towards the back of the second board, crossing over the Rock River on a girder bridge and running off scene. The aim is that it provides a chance it run some of my American stock, multiple locos (lash-ups as they say in the US) and long freights. To make it work, the fiddle yard is along the back of the layout and single-ended. Off scene the 180 degree curves are tighter than I would like, or normally consider, but it is only a short-term layout with stock running at slow speeds, so hopefully it will be ok. I am limited with space, as it has to be split into five separate boards (two scenic, two ends and a fiddle yard) and taken down between running sessions. Geographically, I am imagining it to be California somewhere, but in reality of course it could probably be anywhere, allowing a variety of RR companies to be operated. 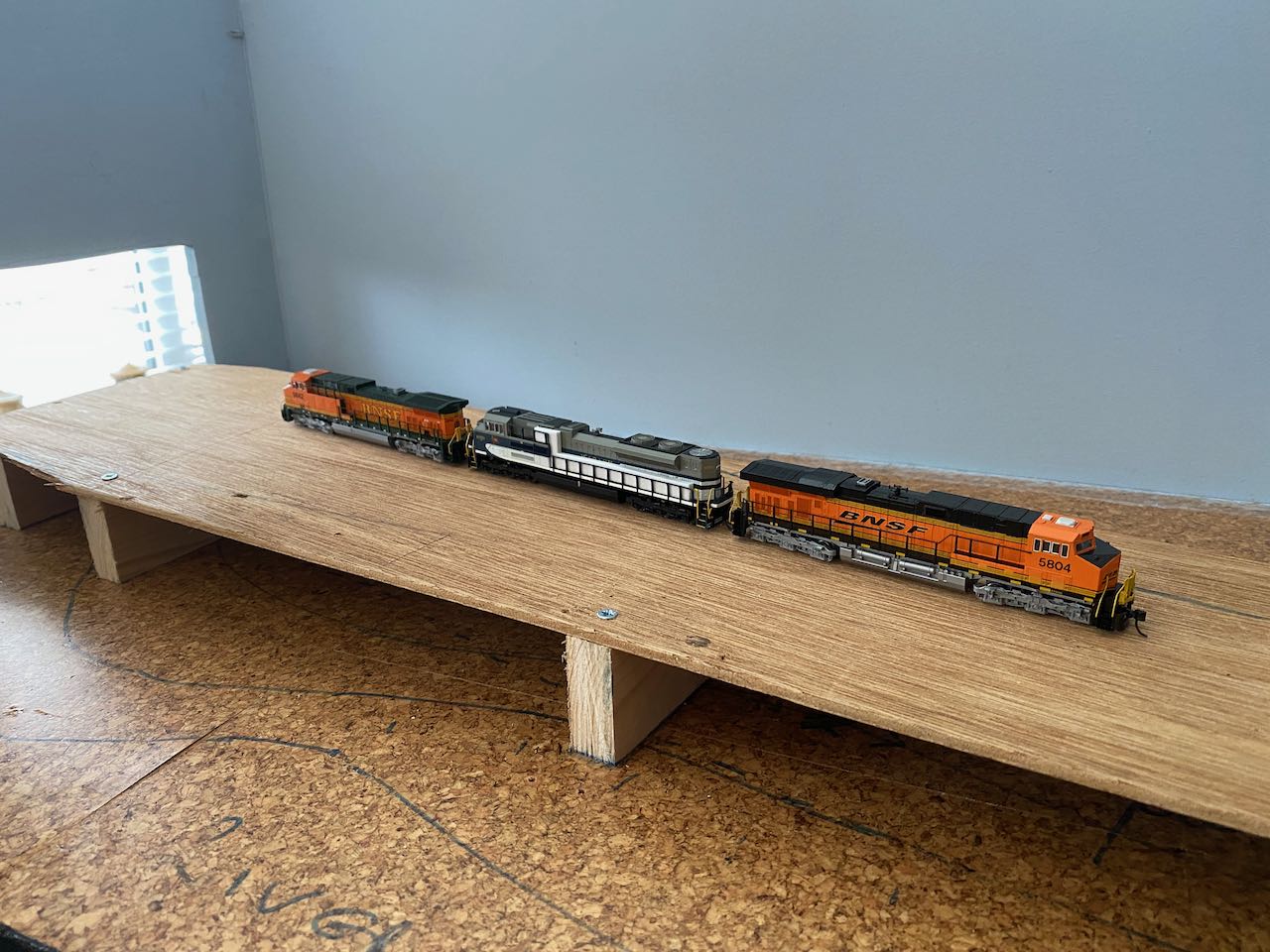 Originally, the intention was to remove the current solid base, screw risers to the base frame and create a lightweight open frame baseboard. However, I did such a good job of gluing the cork down two years ago when the boards were built, that there is no way it will come off, so there is no access to the screws securing the top board! Instead, I have raised the trackbed up two inches to provide some relief and variance from the river level. This has just been completed for both boards, so the next task will be creation of the scenic skeleton. 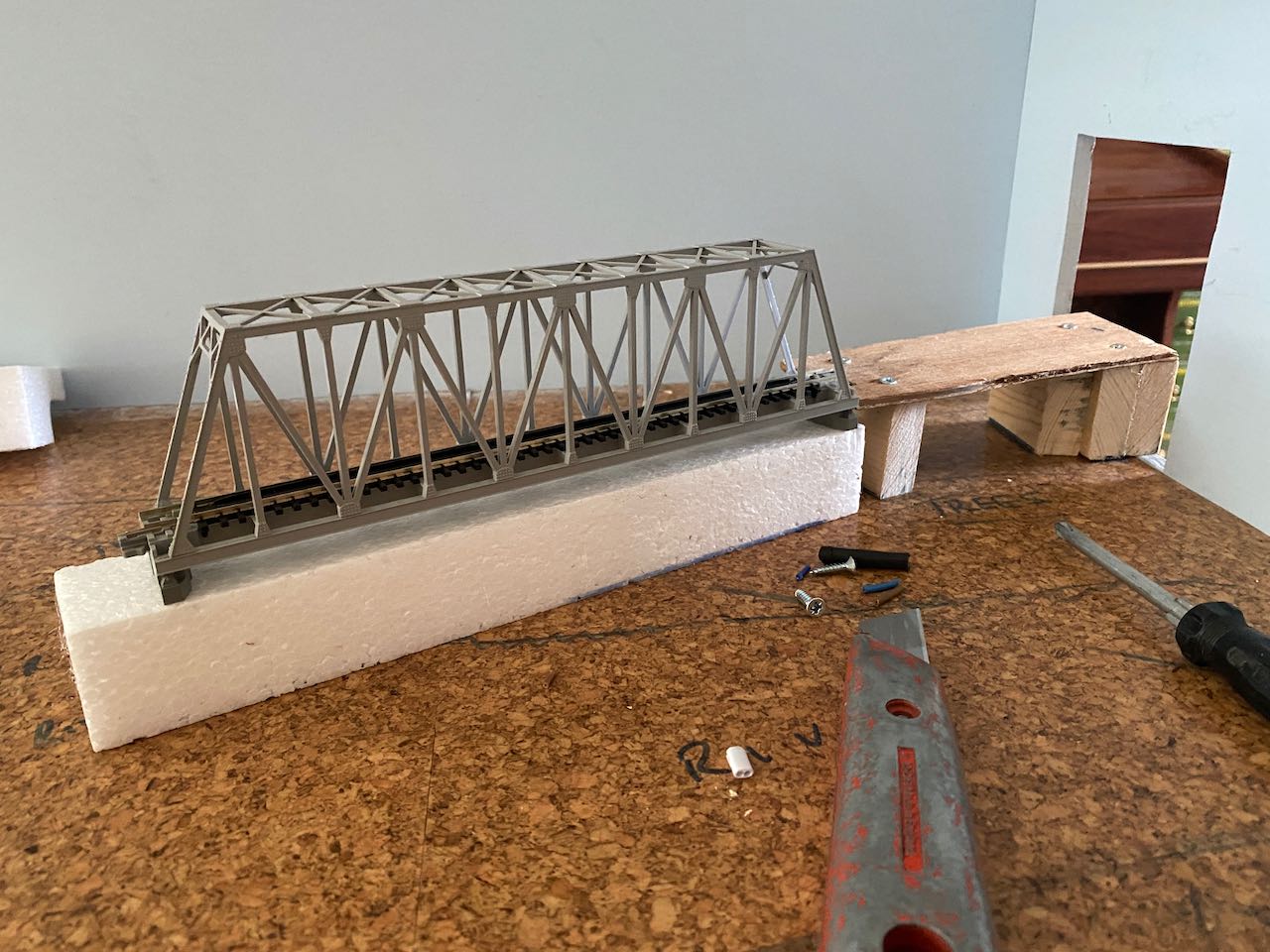 The aim, as you will see from the plan is to create a ‘hidden’ valley that can only be seen by looking through the bridge to provide some depth, which ‘viewblockers’ will hopefully make the layout seem longer and bigger than it is, also removing the need for a back scene or bridge/tunnel at one end. It is being built in between work and family life, so progress may be slow, steady and/or sporadic! 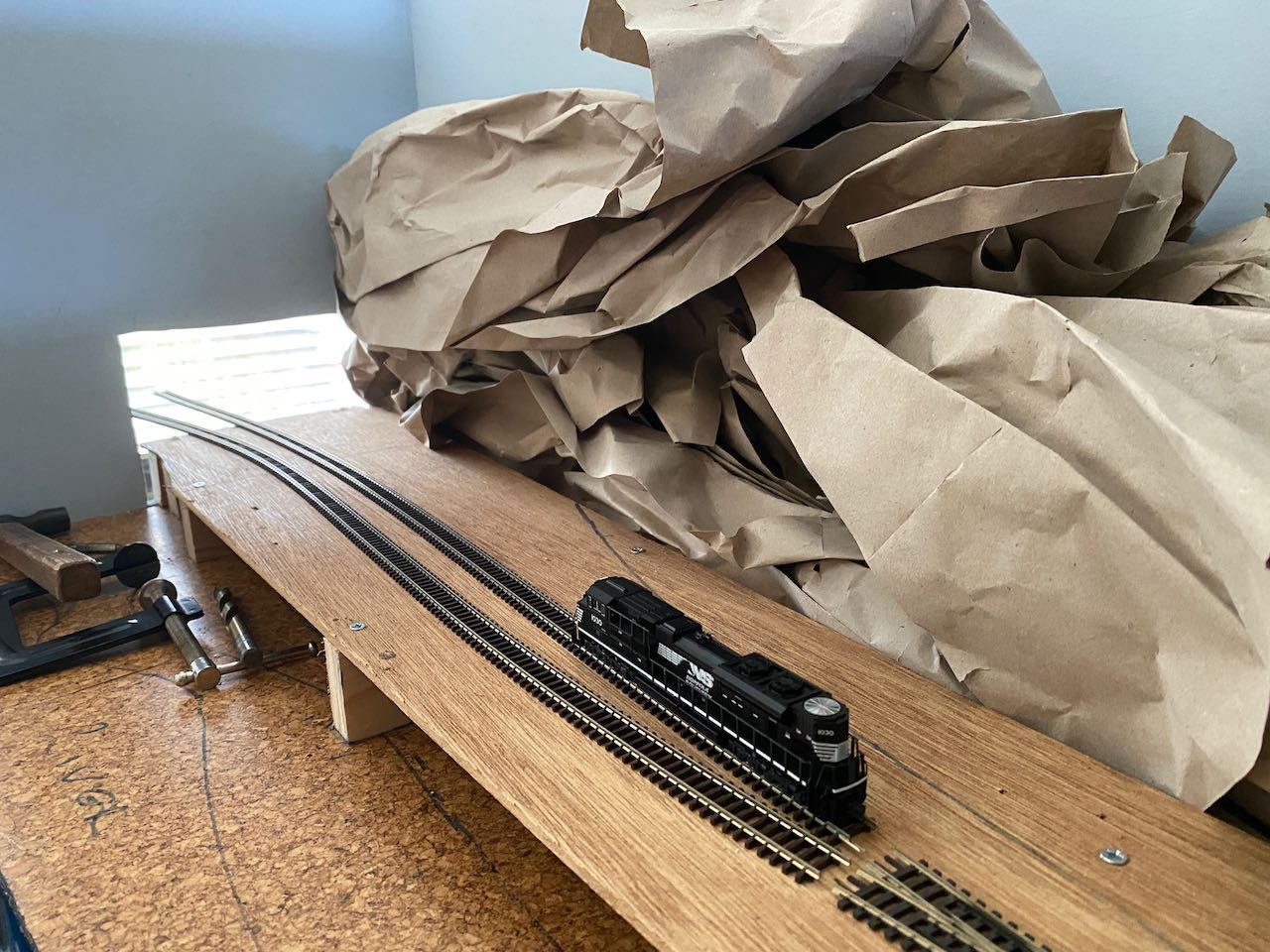 The brown paper here is purely to aid planning and gives in impression of how the canyon rock sides will look on this section, with a couple of pictures showing the photographic opportunities when completed. 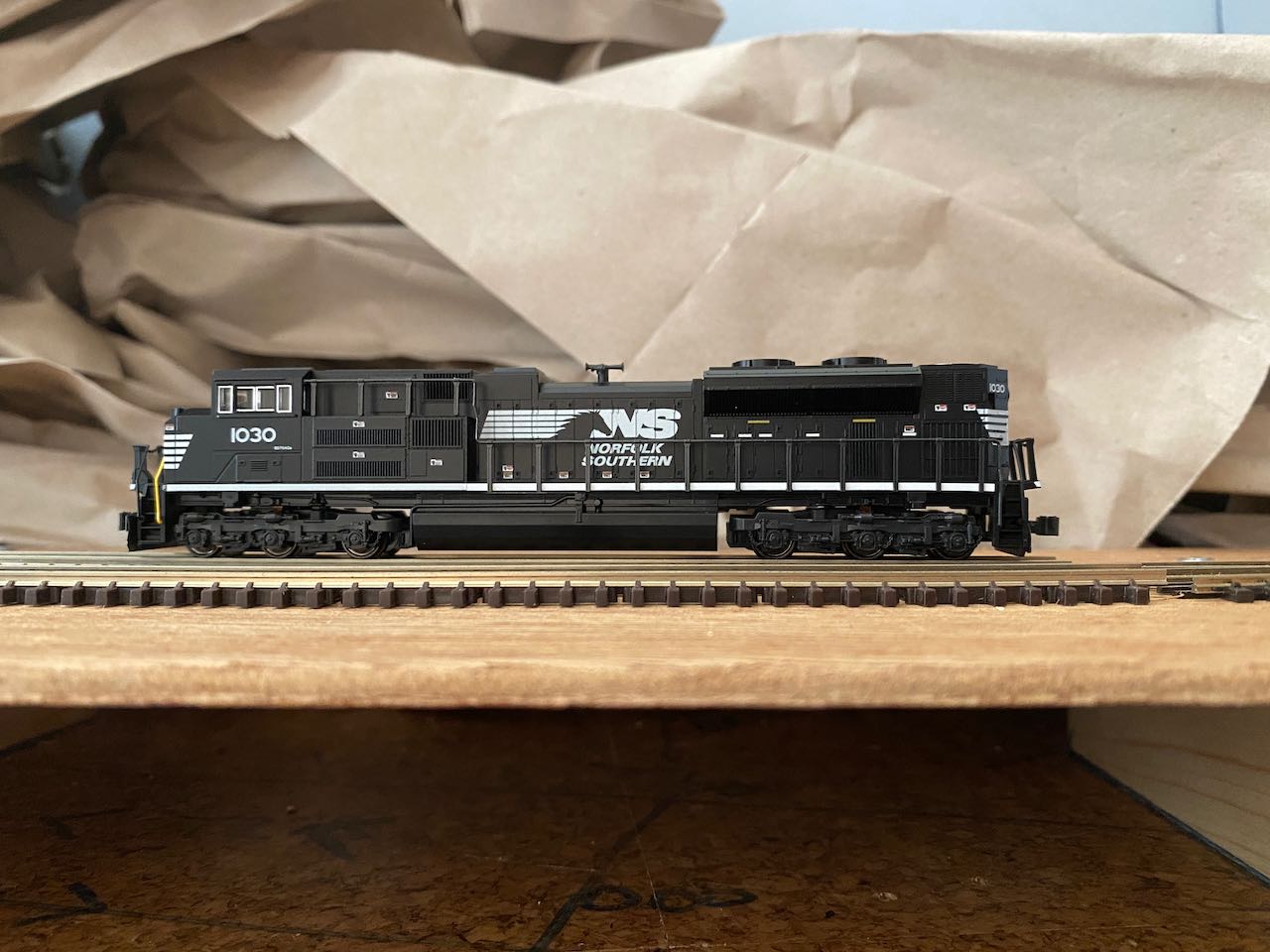 Hi Richie,
A good friend of mine did something very similar to what you’re planning, it can be seen here: http://cprailmmsub.blogspot.com/2016/08/thompson-river-canyon-n-scale-layout.html
He sold this to another friend who has it now.
I’m looking at your plan and thinking it would be very easy to connect the line to the right loop for continuous running as well as how you intend to operate.
Imagine a train sitting at the switch waiting as another thunders by on the main, yowza!

Thanks Rico,
Yes its certainly similar, I am hoping the water will play a bigger part in what I am planning, but I actually like the idea of having a single track connection to allow continuous running. While I don't like to see the same train going past all the time (I like the variety as if you were actually there) it could be useful for running in new locos and testing. I'll have to look into that a bit more!

A light-hearted round up of things, where we are and wants to come!

Welcome to the ‘Rock Creek Chronicle’.

As a bit of background, Rock Creek is a small community, well hamlet of one, but the plan is the Chronicle will keep everyone in the hamlet up to date with what’s happening. The Editor of said journal, Mr Updar Creek, is also the reporter, photographer, typesetter, printer, proof reader, distributor chap, gardener, and not to forget the most important job - making the tea in the office for him and the cat, a small black and white moggy called flash. So named, as every time a mouse is around he’s nowhere to be seen, having gone like a … well you get the idea. Rumour has it, this Editor isn’t very good at what he does, so I doubt this paper is going to be a regular thing, but you never know, you might possibly get another before the end of the year!

https://www.betweenthetunnels.co.uk/ngf-rockcreek/RCC_Chronical_Edition_01.pdf
(If your reading at work, the above PDF is safe to open!)

Very cool reporting. Remember to keep your sleeves out of the ink in the pressroom.

I'll pass that gem onto old Updar, next time I'm passing through the place

For inspiration I would suggest you look at the Western Pacific's Feather River Route if you haven't already .

Feather River Canyon is a good idea. Another prototype scene of a railroad along a canyon wall with the river below is the former North Western Pacific's Scotia Bluffs. 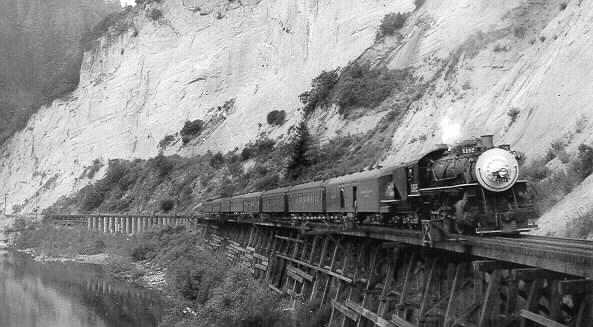 There is also Island Mountain. 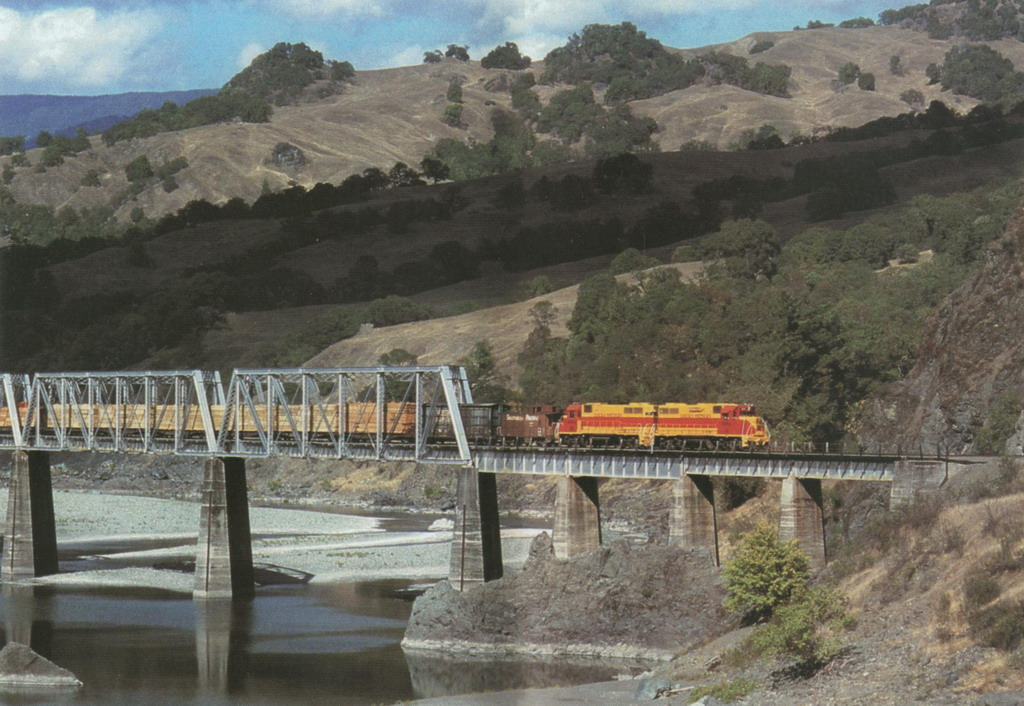 What is not shown in the previous photo is that the rails leave the truss section and immediate go into Island Mountain Tunnel. 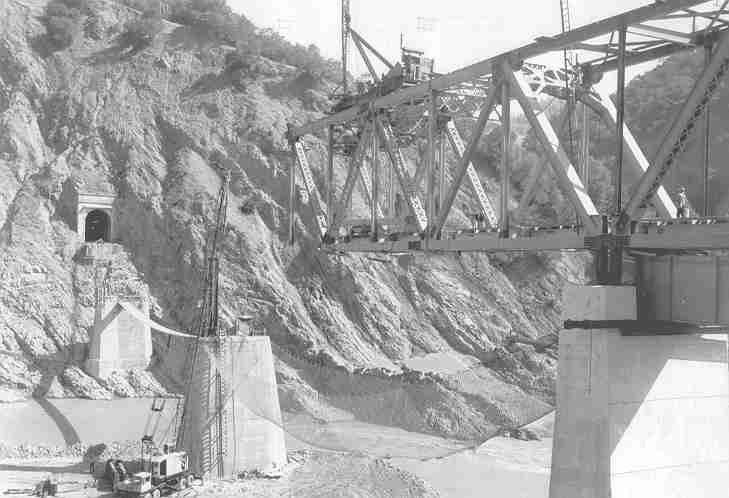 The bridge washed out in 1964 and is being rebuilt.

Along the route were various gravel & rock quarries, of course logging & lumber mills and for the southern 3rd of the NWP Apples (out) & feed grain (in) for the numerous dairies and poultry farms in the Petaluma & Sebastopol areas of CA.


I am trying to figure out how to build these scenes in HO limited to a 7.5' x 10' bedroom. I wish you the best on your endeavors, N scale and my eyesight and unsteady hands don't go together.

Guys,
Thanks for the input ... so much food for thought! I am glad I started the small layout first to have a 'dummy run' at it, but the suggestions and images are giving me plenty of ideas for the eventual bigger model railway! Plus it gives me time to build the rolling stock up ... model railroads aren't cheap things are they!!

Cocaine is probably cheaper and an easier habit to quit!