First, I'm surprised that the forum here doesn't have a separate sub forum about modules.
Anyway, I sold off my previous module set. It was 20 feet which included a grade, a diversion of the track from the front edge of the modules and a few industrial sidings. 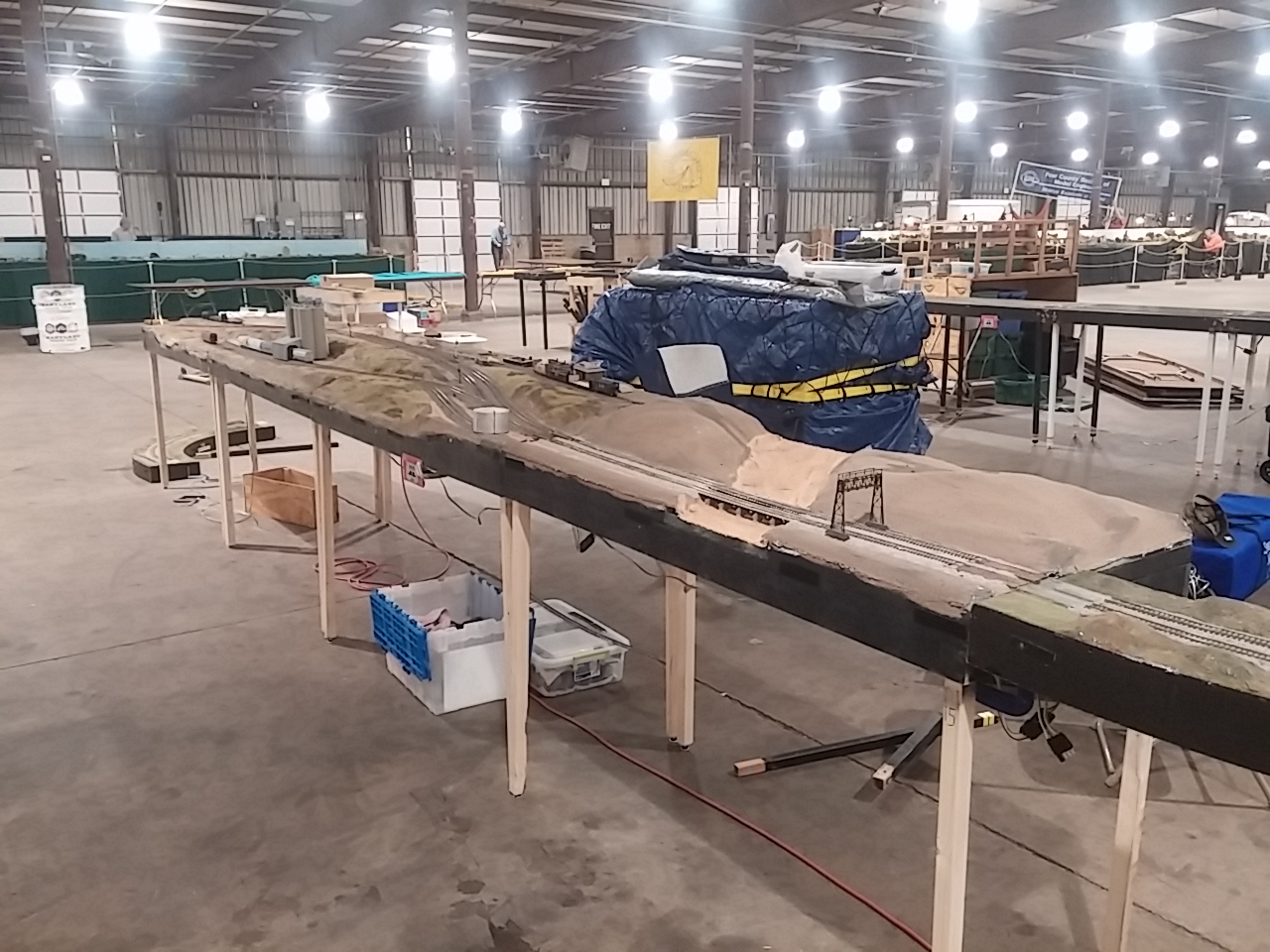 I am starting a new set of modules that will provide a run through yard with sidings on both sides of the mainline. Two on the outboard side towards the viewer and 5, maybe 6 sidings on the backside of the module.
In order to get the two sidings on the viewer side of the mainline, I'll have to expand the module about 3" from the point where it joins the next members modules.
In this new set of modules, I plan to make them an expandable set. In other words, the yard modules will be built so that just the two modules that lead into and out of the yard can be used or additional modules can be added between them to extend the yard. In addition, I plan to build two modules with this that will turn the mainline and yard tracks about 11 1/2 degrees just to get away from the straight away look of the standard module. The turning modules would be used in the larger shows like at Timonium where we would have the room for the larger layout. Along with the turning modules, I'll have to provide incremental modules to go on the two other sides of the layout to compensate for the slight offset that these modules will cause.
Another feature I will be exploring is the legs. Note in the picture above, the 2x2 legs. They have an adjustable foot on the bottom for adjusting the height of the module. I really don't like crawling around on the floor of the cow palace at Timonium because of what has probably been laying there in the previous shows. Remember, its the fair grounds where they also show and sell cattle. I want to try another approach to the legs by using PVC pipes with the 2x2 inside the pipe to provide stability. The PVC pipe will also have an adjustable part that will be near the top so the leg can be turned while standing up. The bottom of the leg will be a PVC pipe cap.
I will use Shinohara number 8 turnouts from the mainline then number 6 turnouts for the yard ladders. All turnouts will be controlled by Tortoise machines.
I have the number 8 turnouts but there seems to be a drought on the market for code 100 number 6 turnouts except for Peco and Atlas. Both, in my opinion and experience don't have the qualities I would like to use in this module for reliability and flow. Peco sells a number 6 turnout that isn't really a number 6 and Atlas uses a huge stamped frog that really looks like something that belongs in a sand box for the kiddies to play with. Might as well put a Mickey Mouse face logo on it too.
Our next club show will be at Timonium in early May. I plan to have three of these modules ready for that show. It won't have the curved part ready then but will have the two end modules and one mid module extender.

Our informal club had a modular layout but it was large and we actually had no where to set up the layout other than a member's garage. We soon lost interest in the modular layout and some of the individual mods found homes in member's layouts.

The modular club I'm in does at least 12 shows a year. Most of those are in local libraries. A couple or few or at train shows, i.e. Timonium and Chantilly.

Finished building the basic module top for one of the ends. 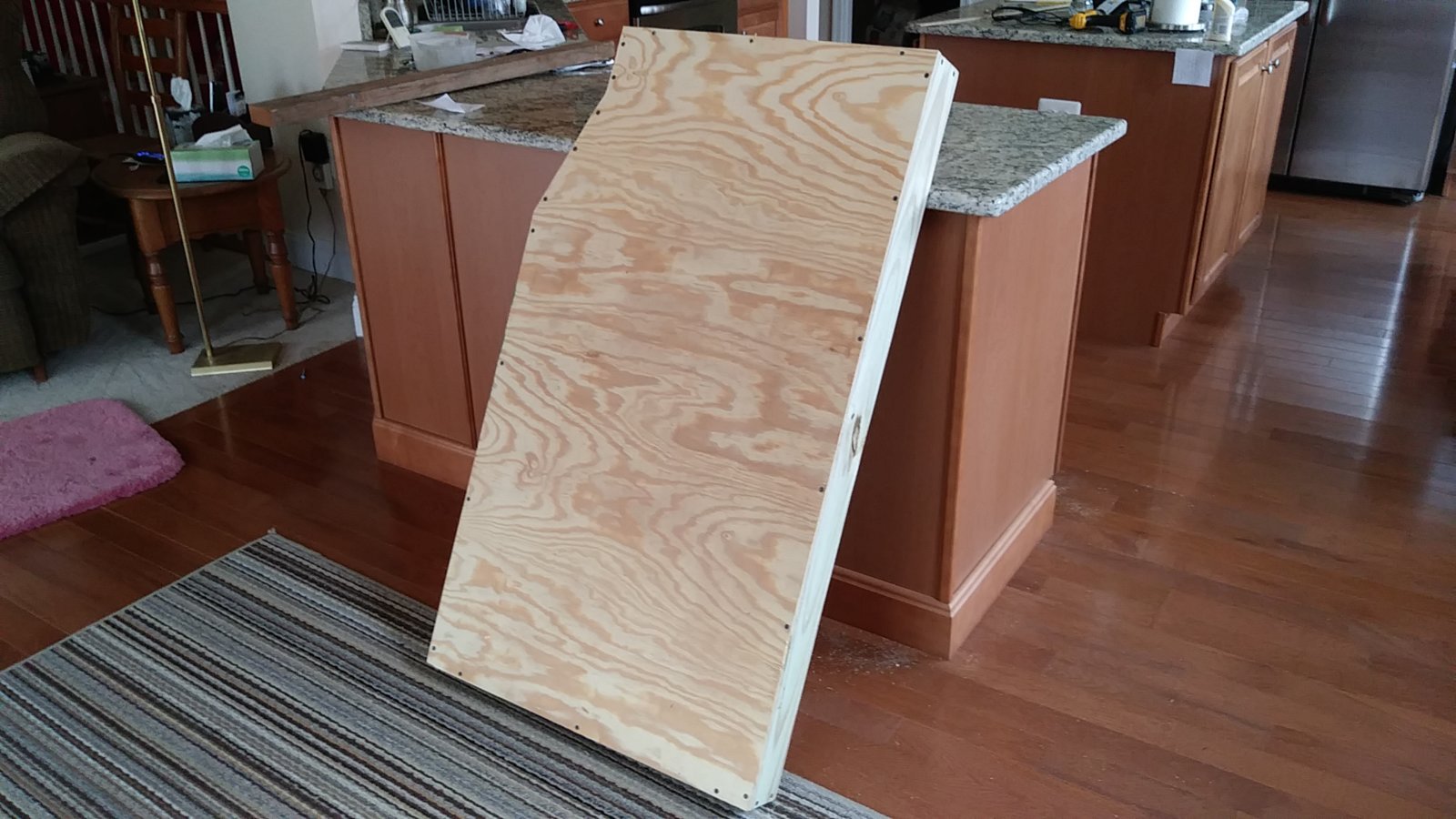 Staff member
How many sections are you making?
Will they have a "special" carrier built also?
What will be the W-L of each module?

For now, I'm just building three sections. They will butt up to the standard 2' wide module but will flare out to 28" to accommodate the two sidings on the outside of the outside mainline.
For now, they will be able to just stack in the bed of my F-150 with the Tonue cover over them. As I add modules, I'll have to build a carrier for them. I envision building at least 8 straight modules.
The two modules that provide the 11 1/2 degree curves will be a little odd shaped but will retain the basic 4' X 2" core dimensions in order to fit with the rest of the modules in the group.
Finished the other two modules this afternoon. The two with the flair will butt up against the standard modules. The basic rectangular module is 28" wide to accommodate the outboard two siding tracks. 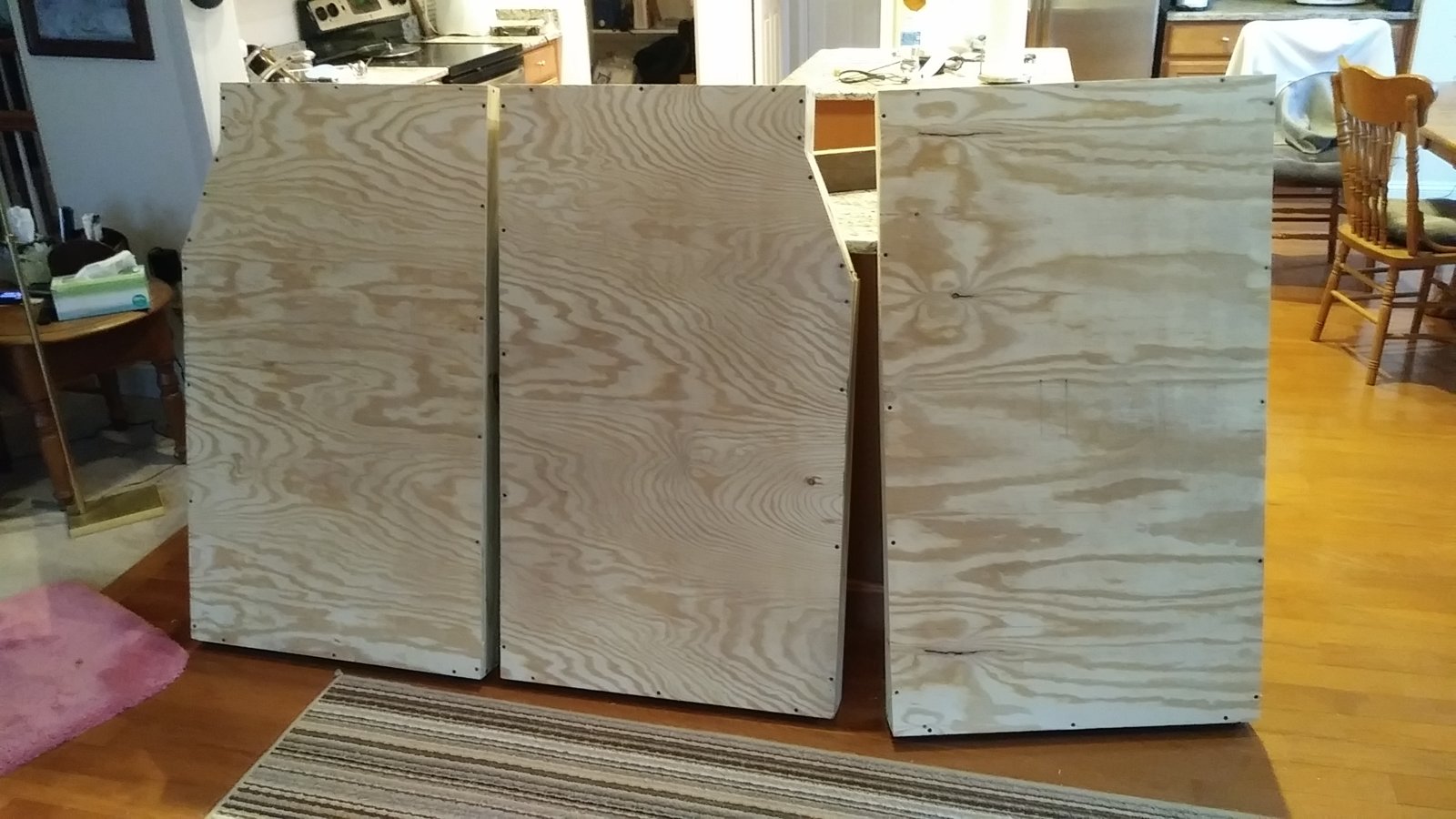 I admire some of the clubs in Wisconsin with their large modular layouts. One layout in particular at a swap meet last year, I talked with the one of guys setting it up and the only times the layout is completely set up is for shows, otherwise the club members work on their own mods at the club.

Staff member
KEN hate to be a "pest", but can you detail the construction for my benefit?
What materials (dimension wise ) are used?
My BOLD is stuck on- sorry!

Hit CTRL B and the bold will turn off.
The end modules are 4' X 2' and 28". 2' feet wide on one end and 28" wide on the other.
The side pieces are 1x4 pine.
The top is 15/32 plywood.
I cut the flair part starting at the 4 1/2" mark in from the end of the module. That is the distance that the track is supposed to be set back from the end of the module per NMRA standards. That way, a 9" straight track can be used as the joiner between modules. I can use whatever dimension of track that I want between my modules because they won't meet up with other modules.
The track rail head height will be 40" from the floor using adjustable legs.
I have been messing with some PVC pipe tryin to figure out how to make adjustable legs without having to crawl on the floor to adjust them. It appears there is no practical way of doing it. The threading on the PVC pipes are NPT instead of NPS. That causes them to tighten as they are screwed together. NPT is National Pipe Tapered. NPS is National Pipe Straight. I can't find and affordable way to recut the threads in the NPT pipe.

Thanks Sherrel for getting me in the right direction on the leg design.
I went back to the hardware store and found the 16mm 2.0 coupling fit into the leg piece just right. I picked up a 16mm X 90mm bolt and nut along with it.
I cut a couple pieces of the leg PVC to test.
The parts are in the first picture. 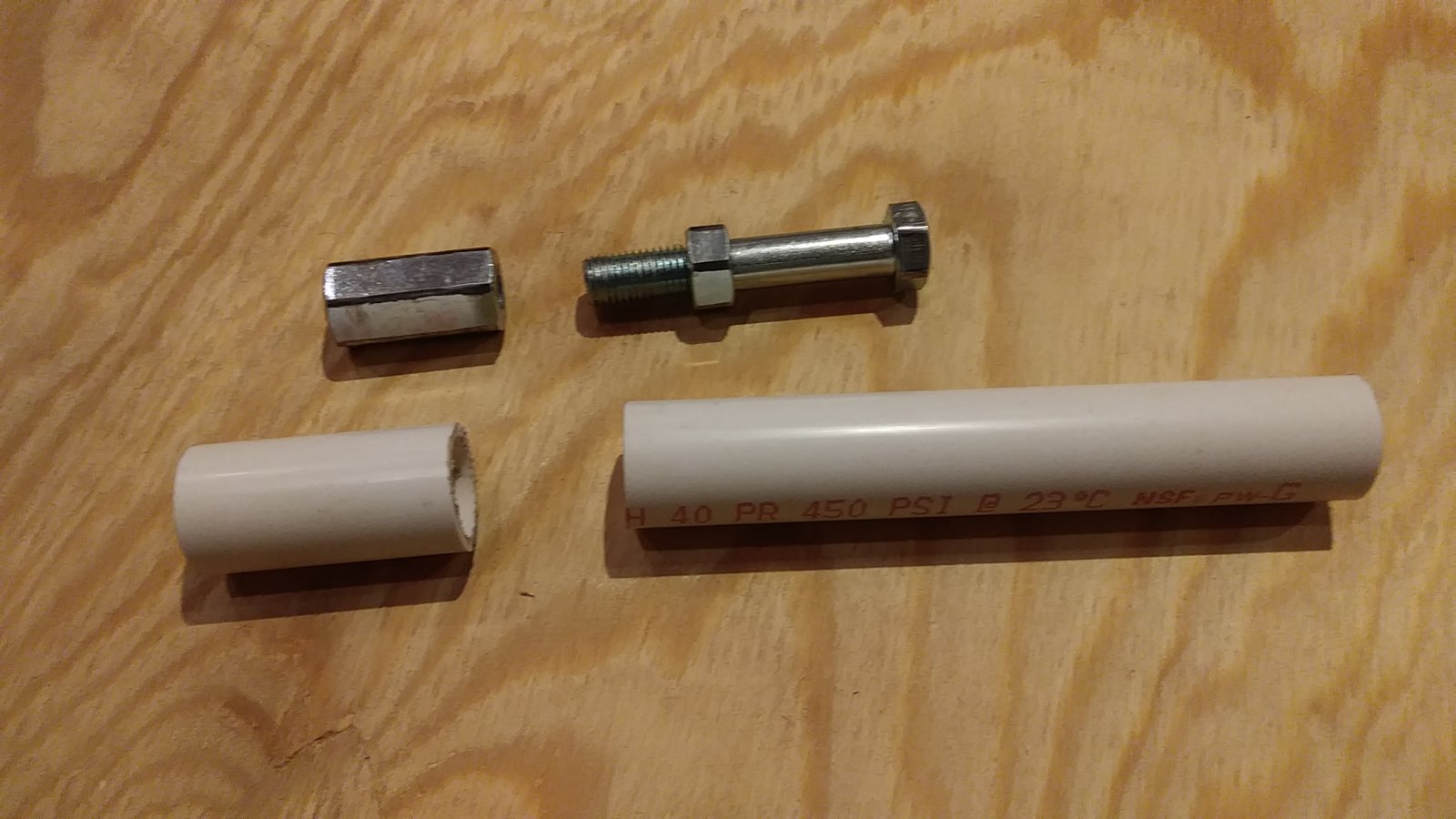 The coupling goes into one leg, the nut goes onto the bolt and is tightened down to the end of the threads to keep it in place then that assembly is hammered into the other leg. 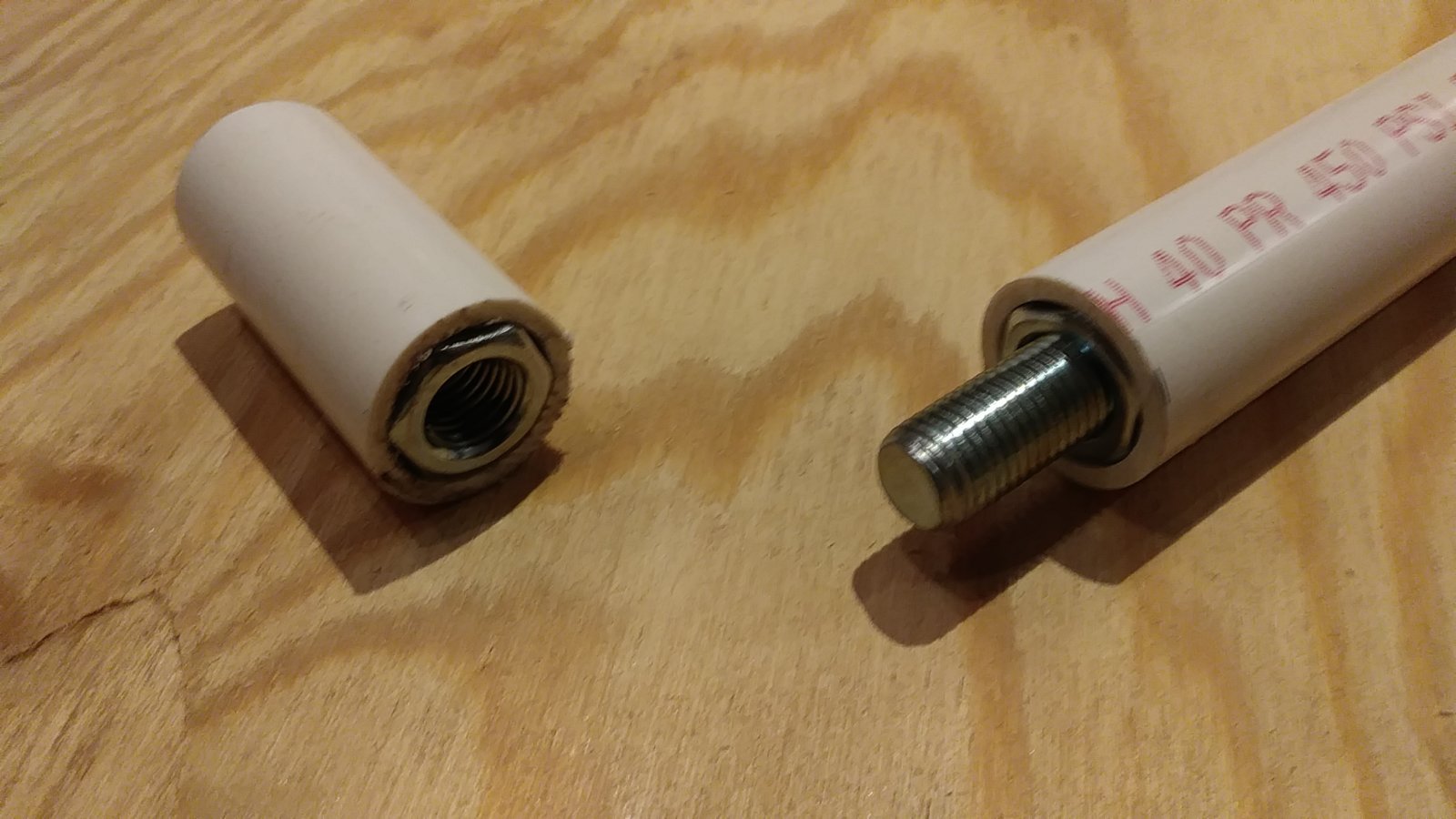 The two halves are threaded together and then the whole leg is slipped into the leg holder on the module. An end cap can be put on the bottom of the leg for contact with the floor. 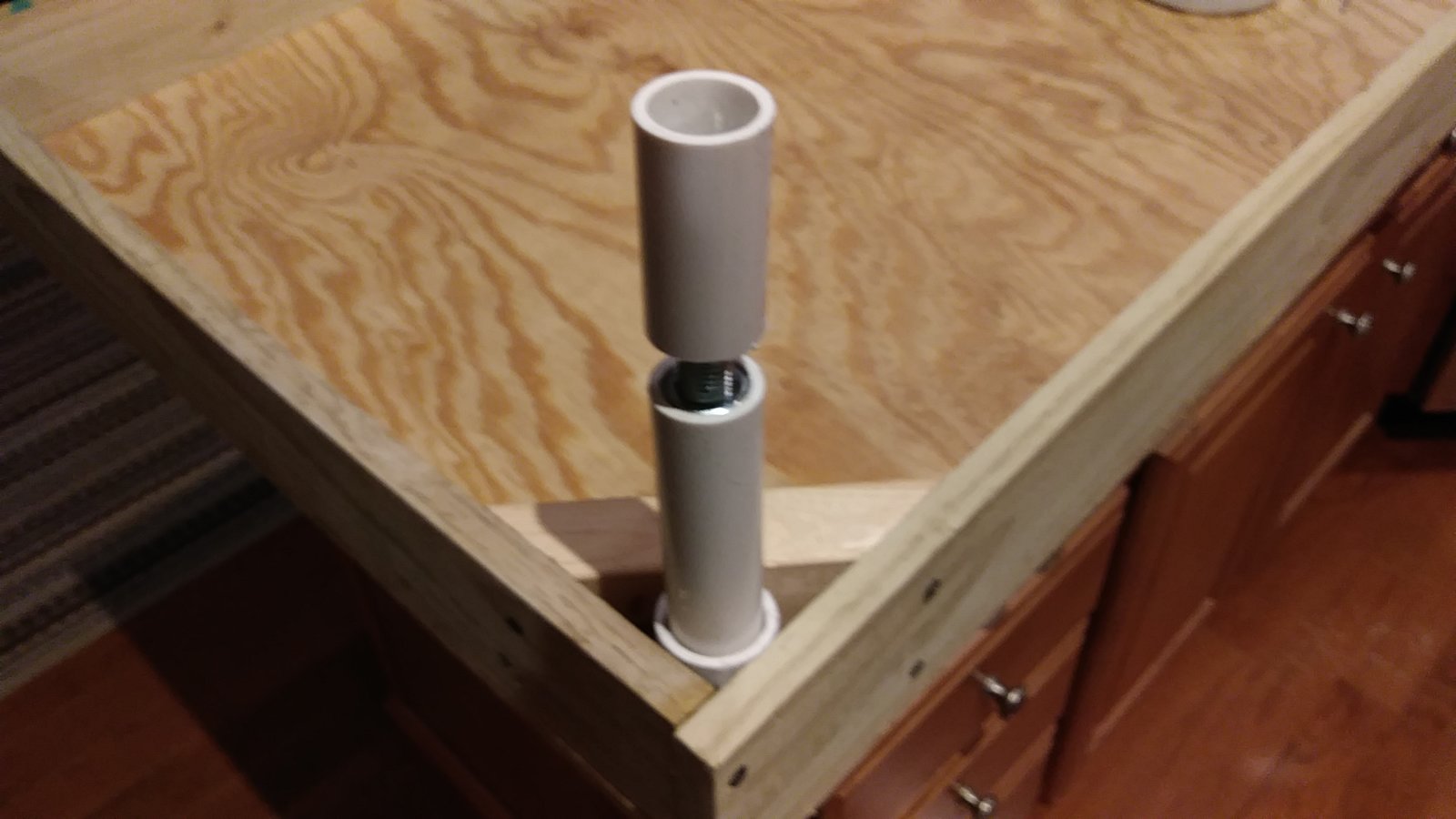 Staff member
Offhand I would say that you are on the right track? Looks good- I had no idea that the tight fit you have come up with would be possible and work, but looks promising.

That connection is quite ridged. No supporting sleeve is needed.
It might be a bit pricey though. The coupling nut is about $5, the bolt about $4 and the nut about .45.
I just ordered ten sets of them from Bolt Depot so I can do all the modules. Total bill was $77.00. In addition to that is the cost of the PVC pipe which might be about $3 worth of material for each leg.

Staff member
ACK!! You need to find a surplus store! Time and distance might not be worth it?
$77.00 is a small price to keep you off that floor though?
S

D&J RailRoad said:
The coupling nut is about $5, the bolt about $4
Click to expand...

OK, pushing on here after so slow work.
Got some track laid down and the turnout fit onto the 6' modules. Tortoise machines are in place and work. 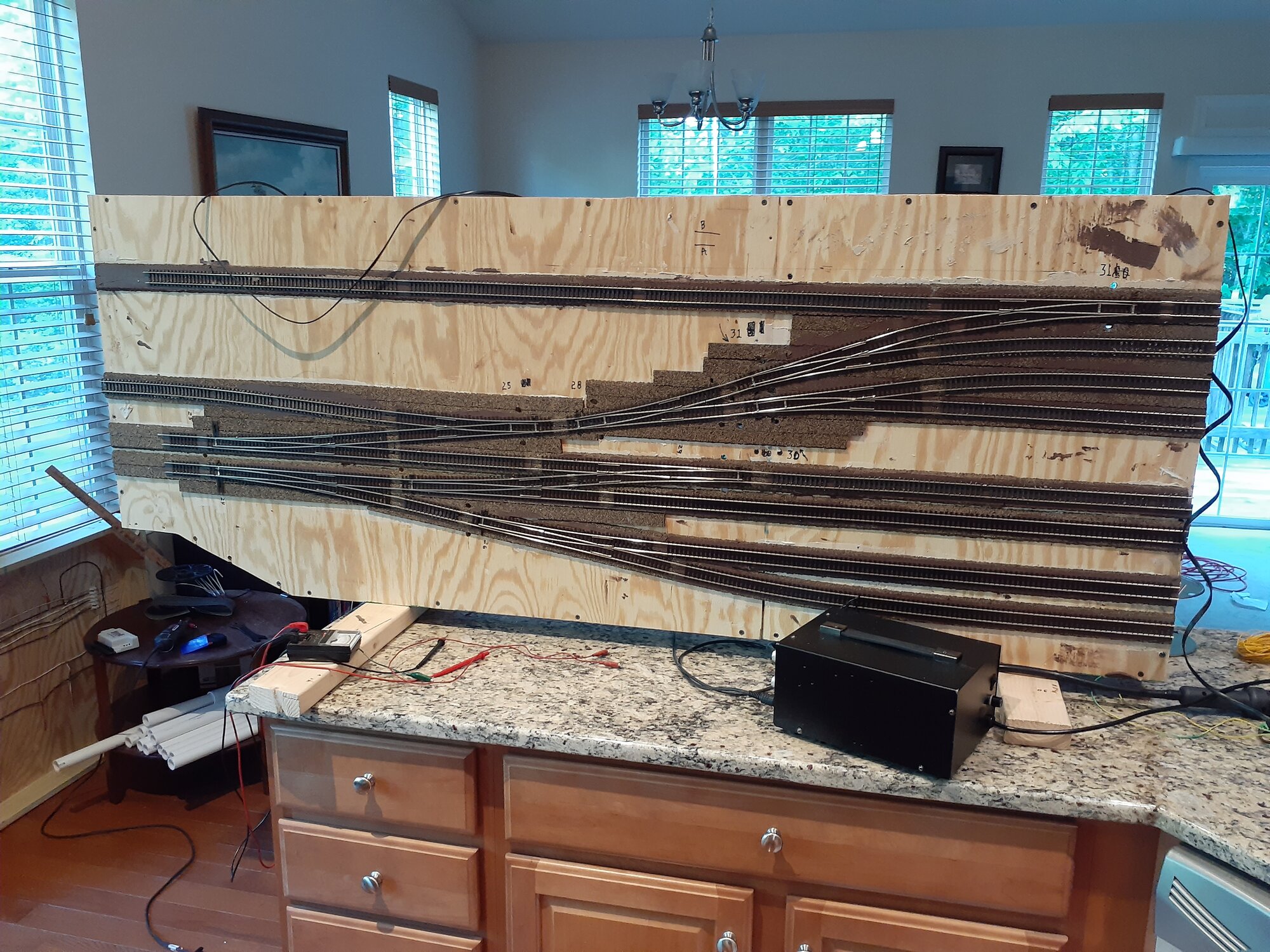 Got the one of the middle modules built and track aligned with the end module. 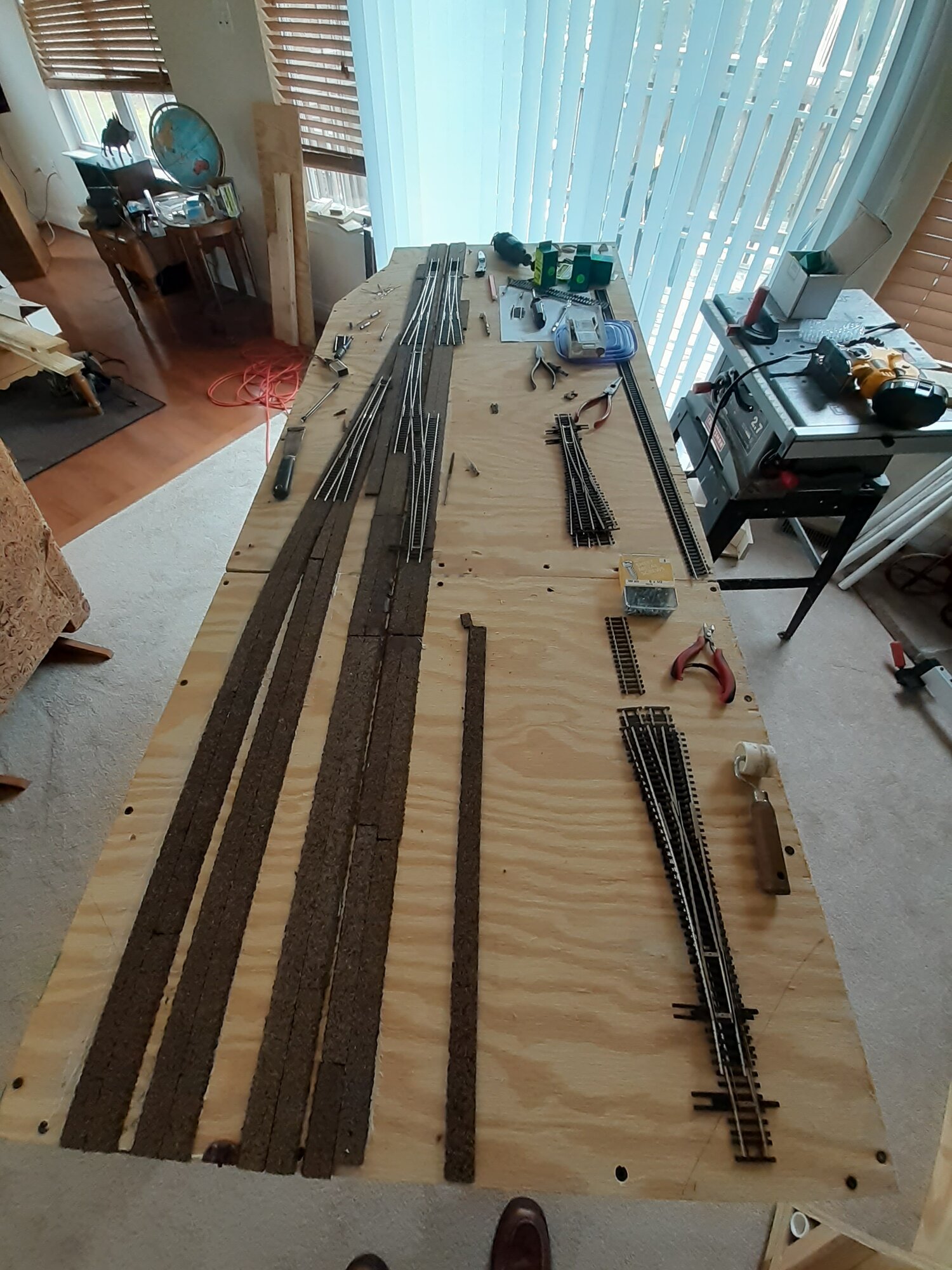 The tedious part was wiring the frogs and momentary push buttons for the Tortoise Machines.
Then the covering to protect the Tortoise Machines from damage while moving the module.
Each module has a UP5 to plug the throttle into. There are also slots in the covering for access to the DS64 turnout controllers as well as slots for clamps to hold the back board to the module.
I am using Power Poles between my modules while the club uses the Ford trailer connectors. I'll add the trailer connectors to the very end modules at our next show because I can't remember off hand which plug goes on each end.
The covering has to be open on each end of the module for application of the module clamps. 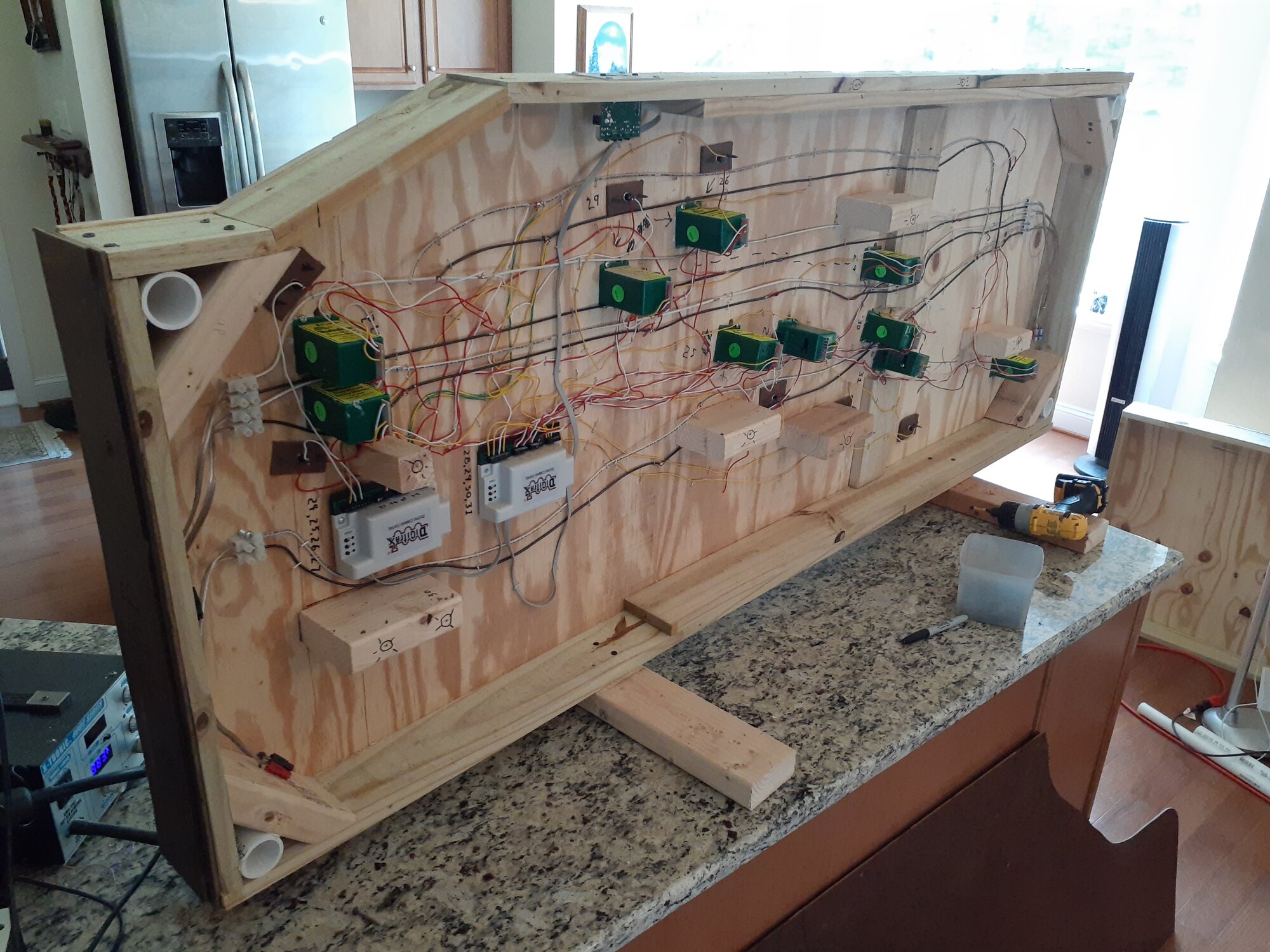 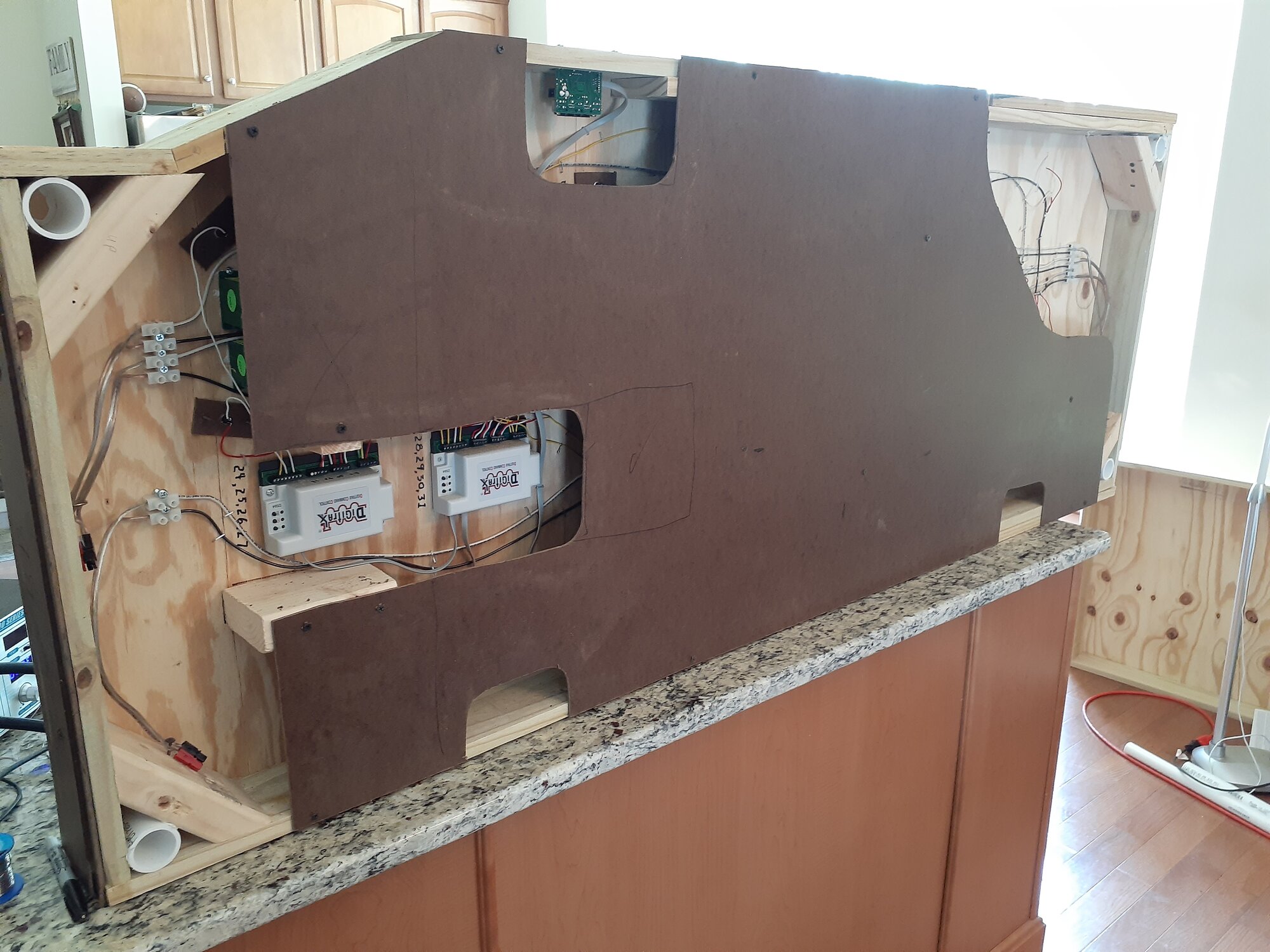 Those are quite the modules, Ken! Nice work!

I am deviating from the standard module practices by bringing the track right up to the edge of the module to eliminate the jumper track piece. They never seem to fit right, either to long or way to short. With these, I only need to slip a track joiner onto each rail, bring the modules together with the clamps then slide each rail joiner to align each rail. I am putting Masonite boards on the end of each module to protect the track from snagging on things during movement. They are all marked so I know which one goes on each module. Just held on with dry wall screws. 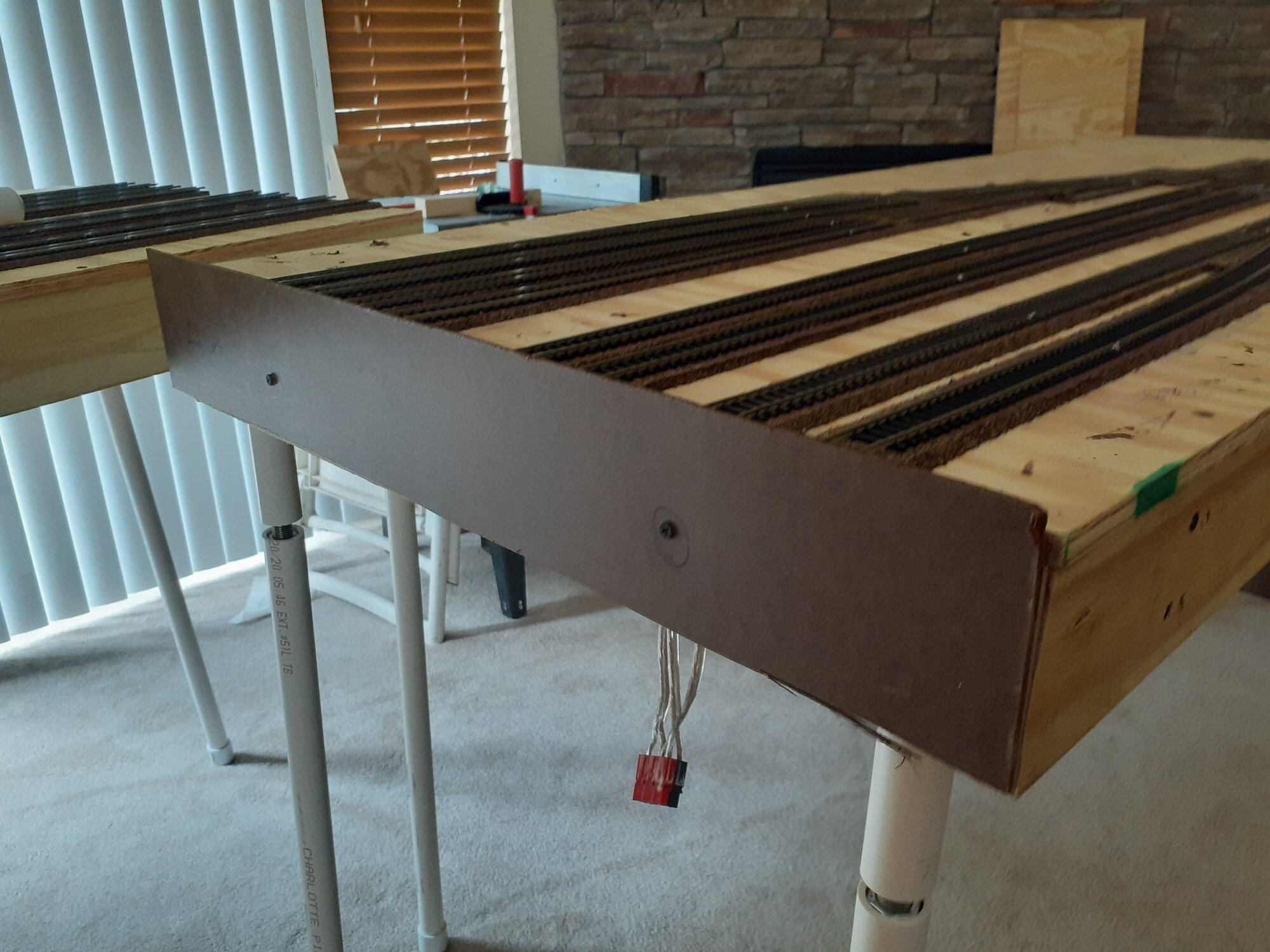 The turnout controls can be done with either the hand held throttle or with a push button on the surface of the module near each turnout.
These are just momentary push buttons that activate each turnout through the DS64. I selected the numbers 24 - 39 for these modules. Nobody else uses the DS64s on their modules, yet. I guess this will have to become a club standard to assign turnout numbers to members so they aren't duplicated around the layout.