Hey all, has anyone played with or seen layouts with smaller scales in the background as a distance effect? I'm working on an HO layout and have some N scale stuff I dont use and was thinking of putting it towards the back splash as to appear far off. any thoughts?

I have seen this done on a couple of layouts. N with Z in the background and an HO with N in the background. In each case it just didn't look right. But wait, I blame the modeler in both these cases. Each had a layout depth of less then 36 inches. Too close together in my humble opinion. I felt that the smaller scale would look better in the background of a really large, and deep, layout. The kind few of us can afford. There is a trick however. I don't know your layout specs, but if the depth is less than five feet you may get by reasonably by using mountains, or hills and trees in between the front HO and the back N giving a peek-a-boo type of look. So I think it can be done, but some good scenery modeling in between the scales will have to be considered. Jim
C

I've seen it work, but only with static models, like structures. No moving trains, as that actually destroys the illusion. Any moving trains in the "distance" has to be run at a much slower speed, as to give the illusion of that distance. I believe where many make their mistake is they run the train way too fast. The further away you are from a moving object, the slower it seems to be moving, so to overcome the fact the train may only be 3-4' away, it should be moving at least half as fast as the foreground trains.

The easiest illusions are done with structures. But remember here too, that you have to have the illusion of distance, so you increase the surrounding scenery between you and the distant structure. As you know, the further away from you an object is, the bluer it appears, due to haze, smoke, humidity, so the structure should also be painted to have a light, blue tint. You could also try this with the trains as well. You should never have the entire structure visible, and if possible place it where it can only be seen from a certain angle. This too will give you the illusion of distance.

In Pottersville, NY, there is a model Railroad museum called Railroads on Parade. In one of their main layouts they use O scale in the foreground and HO in the back. One of the first pictures on their webpage shows the two. It doesn't picture as well as it looks in person.

Depth from front to back is the key element to make that work. Most of us don't have that much flat area available on a home layout. You can pull it off with elevation of the background and some trees or other relatively tall pieces of scenery to help create the illusion of distance between the 2 different sized building scales. In brief, if you don't have enough horizontal distance you will need vertical distance to fool the eye into believing the effect.
R

Thank you all for the feedback. Great ideas and tips to consider. thanks again
W

KB02 said:
In Pottersville, NY, there is a model Railroad museum called Railroads on Parade. In one of their main layouts they use O scale in the foreground and HO in the back. One of the first pictures on their webpage shows the two. It doesn't picture as well as it looks in person.

Geeez, are you sure that's not a website for a circus???? Their webmaster must be a clown!

The place t totally worth a visit, though. 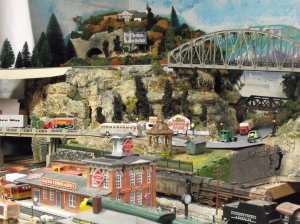 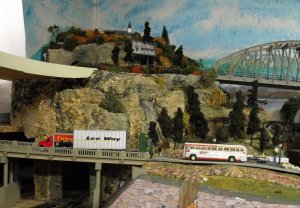 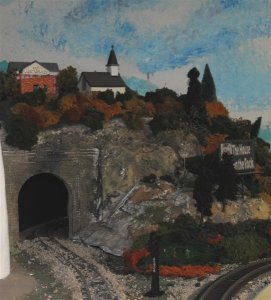 My N Scale town of Summit on my HO Scale Fox Valley layout. Church steeple on top I think it works. The red building is actually a container for holding postage stamps!
F

This is the best example of forced perspective in model railroading, that I've seen.
(It's a static diorama.)
http://forum.atlasrr.com/forum/topic.asp?TOPIC_ID=70528
N

Good effect Gary. The multi level elevations and the billboard and trees on the top level make it work. Curious as to what the front to back distance is from the REA building to the N scale buildings. More room than I have that's for sure.

Thanks. From the REA building to the church steeple is only about 3 feet. Remember, this going diagonally across the layout so its not covering as much space as you may think it would.

KB02 said:
In Pottersville, NY, there is a model Railroad museum called Railroads on Parade. In one of their main layouts they use O scale in the foreground and HO in the back. One of the first pictures on their webpage shows the two. It doesn't picture as well as it looks in person.
Click to expand...

That is unusual, usually forced perspective looks better in the pictures than it does in real life. Humans having binocular vision and all.

fotoflojoe said:
This is the best example of forced perspective in model railroading, that I've seen.
(It's a static diorama.)
Click to expand...

Great for a photo but I don't know what it would look like in real life. I actually think Gary B's church might be the best example I've ever seen. I've even got a couple of those little churches sitting around (Bachmann as I recall). Might have to use them on the HO now.

Iron Horse - Thank you sir! I've always liked the way that turned out. I don't recall the origin of the church but I sure it's a cheapy.

I think it looks great! Seems to me you have a lot of factors working to make that so: as others have pointed out here, you have some depth to work with...how far is it from the observation point to that peak? Maybe 3' or more? The track running across to the bridge also creates a visual "break" that makes the illusion work. Then foliage, billboard & rock wall create another break. Finally, the foliage obscuring all but the upper parts of the structures adds a final visual 'trick'... Nicely done.

I'm among those who just don't really have enough depth for forced perspective to look right...

Thanks kjc, actually the first picture is about only five feet deep. What actually makes it all work is the fact its in a corner. It would work just as well on a 4X8 if placed in the corner. In fact, come to think of it, the layout was pretty much a 4X8 when I first created the little town up there. The trick is there is only one view point you can't get too close.
You must log in or register to reply here.
Share:
Facebook Twitter Reddit Pinterest Tumblr WhatsApp Email Link